There’s a new builder on the custom Hinckley Triumph Twin Block, a block dominated by long-standing names such as UK based Down and Out and Spains Macco Motors. His name is Jody Millhouse, a 21-year-old bike builder from Thornton Hundred Motorcycles, a one man custom motorcycle workshop based in Buckinghamshire UK. 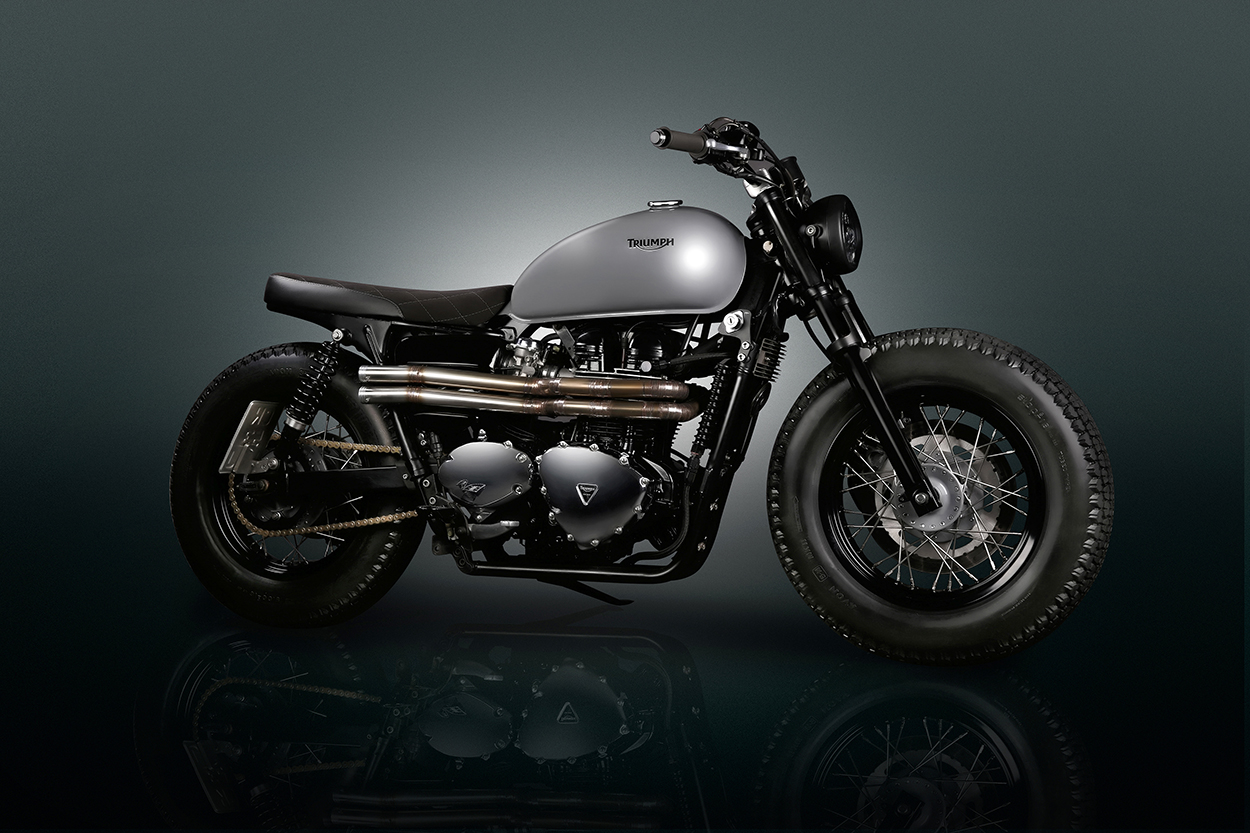 Its true to say that Jody has some serious and much-respected competition on his hands if he wanted to be the next go-to custom Triumph Twin builder. But Jody’s previous work has already been featured on a popular new wave motorcycle website, with the BikeShed.cc showcasing Jody’s Honda CR500 Tracker build this April. 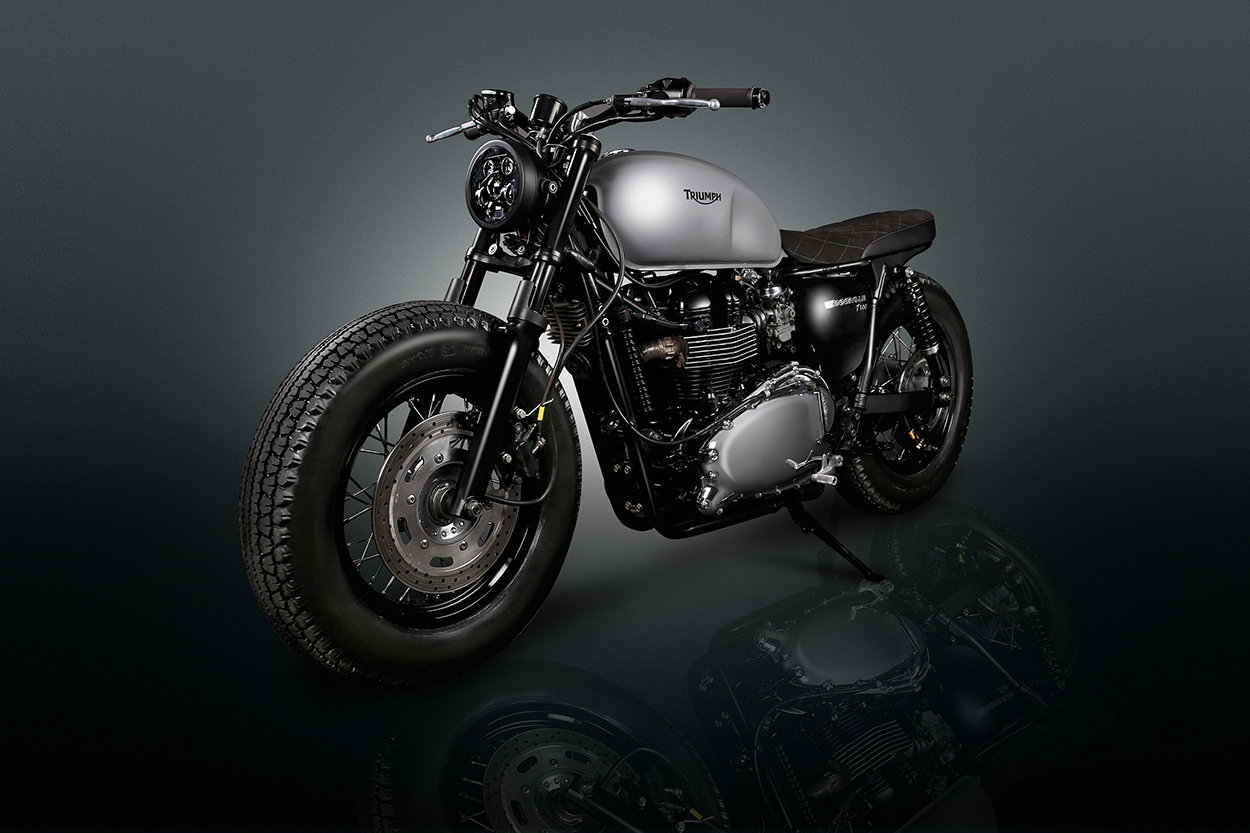 Add to that, Jody’s father is a well-established bike builder, who’s work is often featured in popular Streetfighter magazines. With such a teacher, Jody really need not be afraid of the competition, especially if this twenty one year olds first Triumph Twin build is to go by anyway… 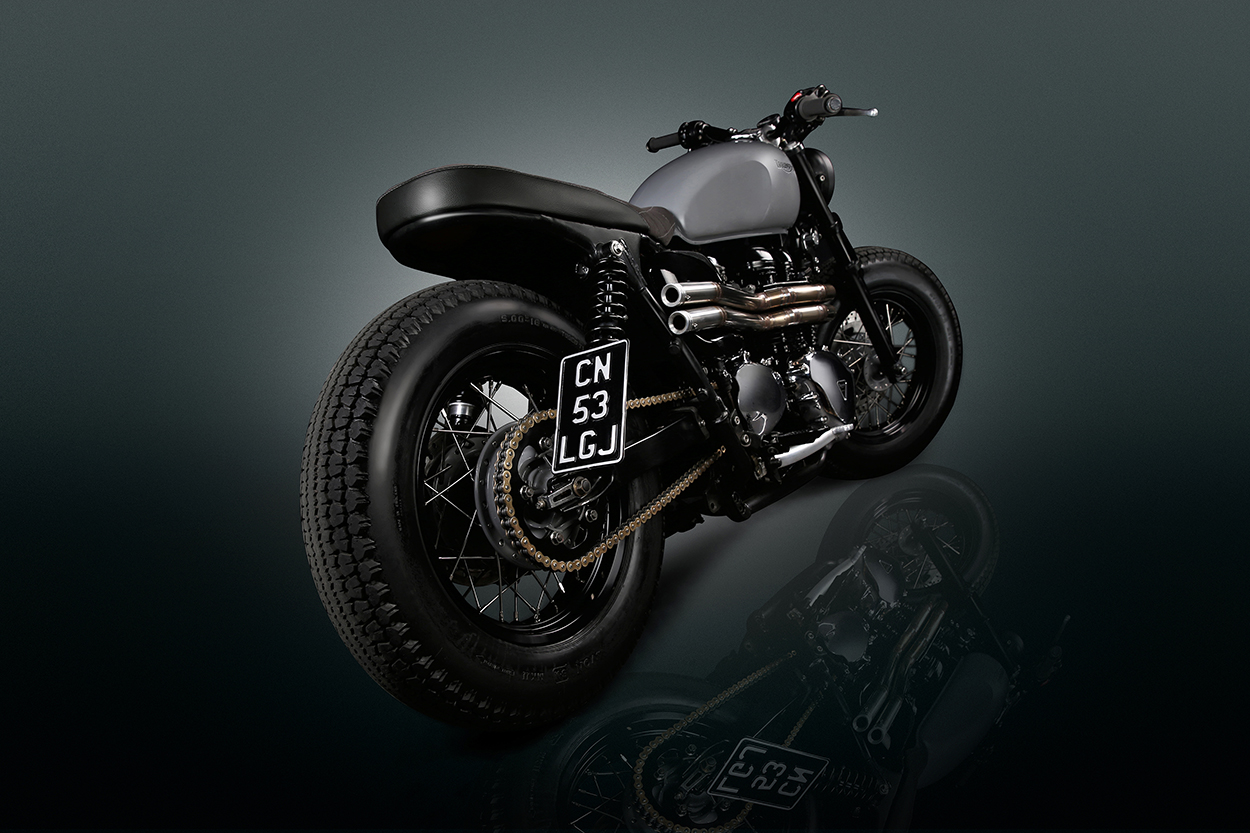 Dropped some 30mm onto a set of 16” alloy rims, wrapped in fat Avon Safety Mileage tires, this 2003 Carb model 865cc Triumph T100 with 14k miles on the clock has already raise a few eyebrows, and of course, some controversy. But you can’t deny, those black rims laced with stainless spokes and nickel plated nipples to contrasting, and stock Audi Nardo grey painted hubs do look the business! 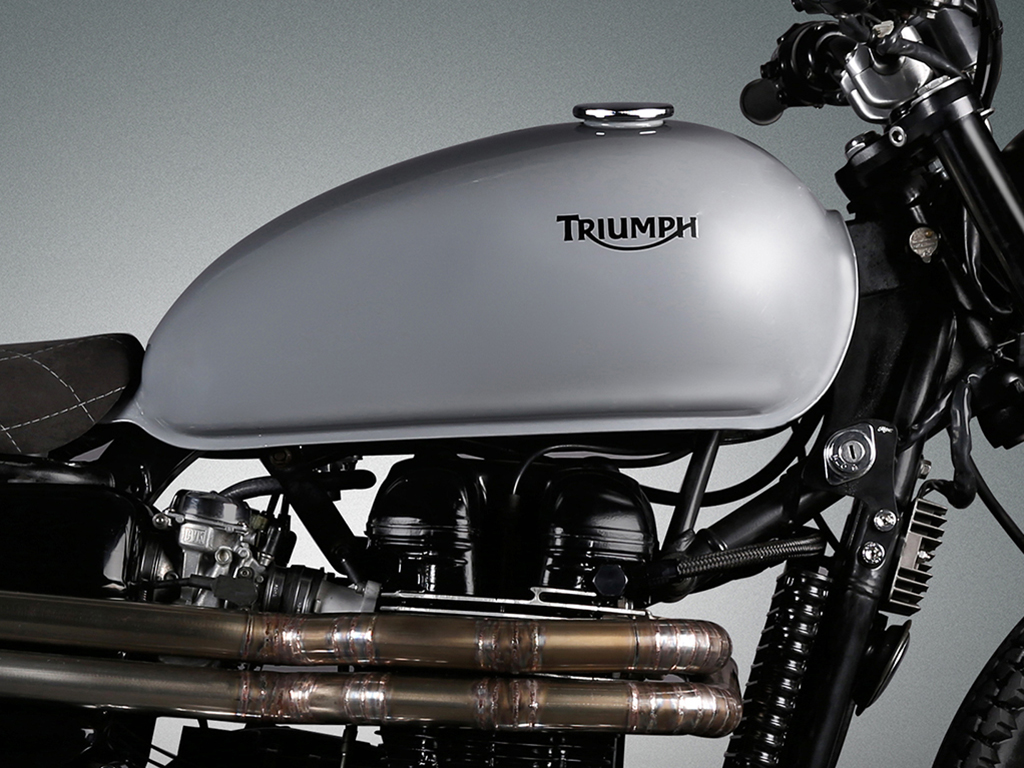 That cool Audi Nardo grey continues onto the stock tank, behind which now sits a custom seat and fender free bobbed and looped frame, kept clean by fitting LED lights and signals to under the seat and moving the number plate to the right-hand side of the swing-arm via a custom bracket. 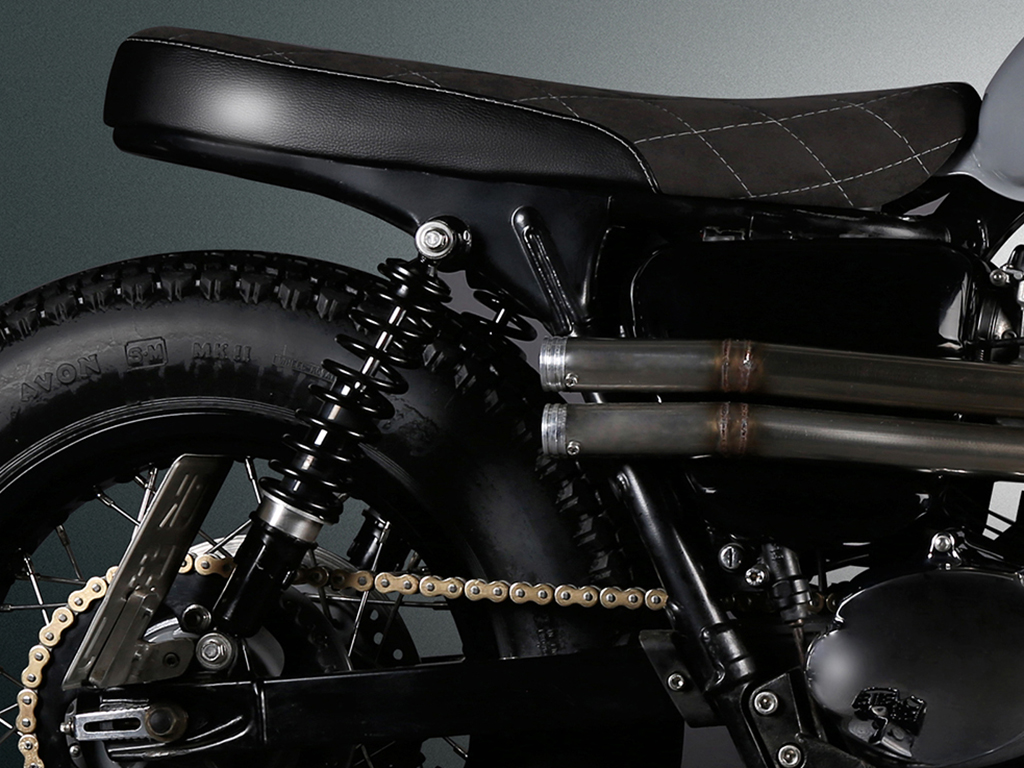 The paintwork on the tank and wheels was handled in-house by Jody, as was the welding and modifications to the frame and manufacturing of the seat base, with the upholstery being the only thing sent out to be upholstered in grey diamond stitch Acantara – some skills there! 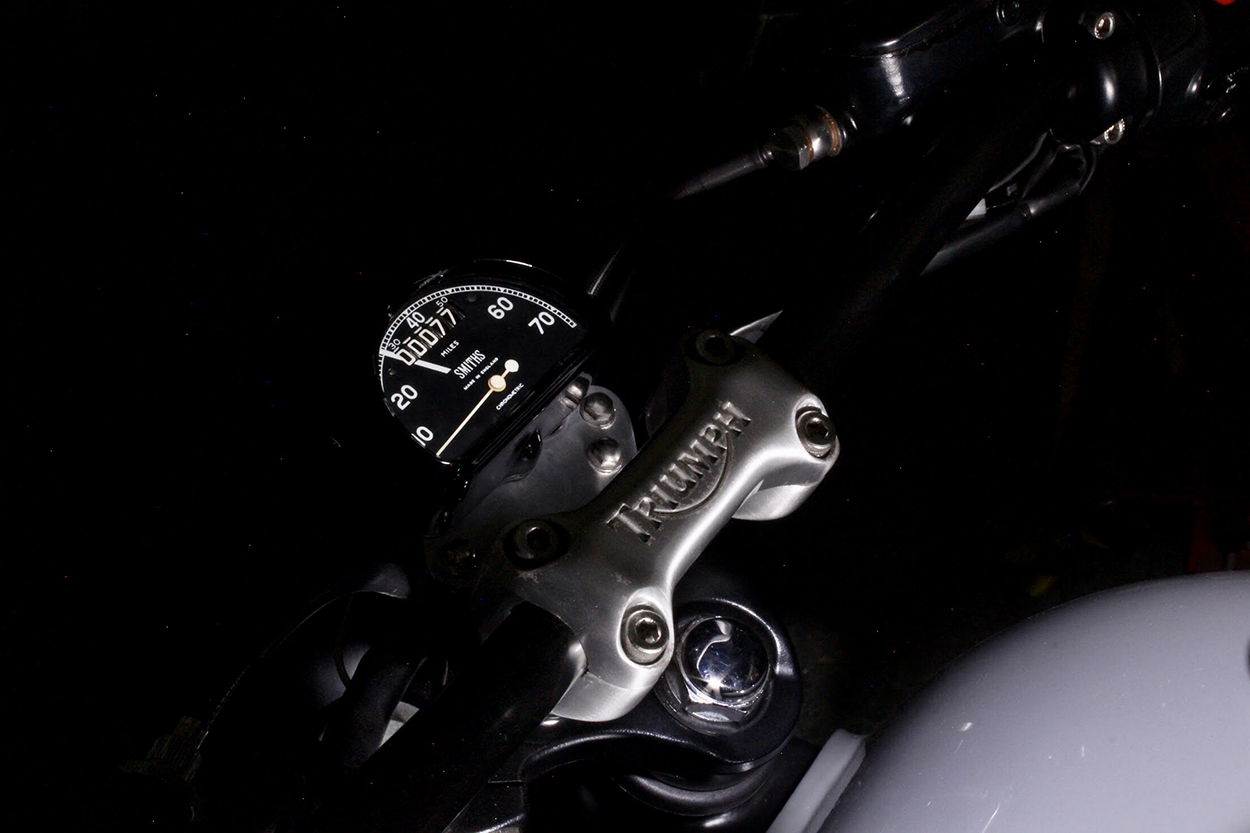 The cockpit of this T100 maintains the stock switches and levers, though now mounted to black Biltwell bars, topped off with Rental grips and some generic bar end turn signals, with the stock bloated clocks being replaced by a compact, and English made D-Shape Smiths Chronometric speedo, fixed to the Triumph Twin via a custom bracket. 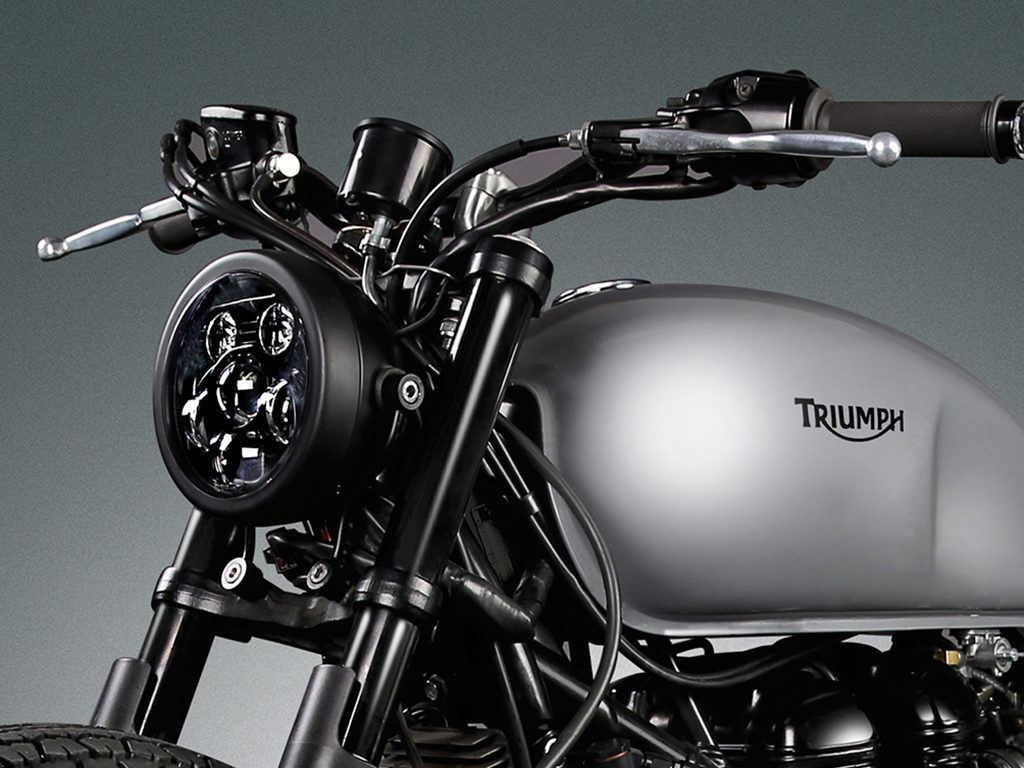 At the front of the bike, and lighting the way is a side-mounted LED Projector headlight, fitted to this Triumph T100 via some interesting custom bracketry, which in turn has been attached to the Twins bottom yoke, rather than its newly blacked PVD coated fork stanchions. 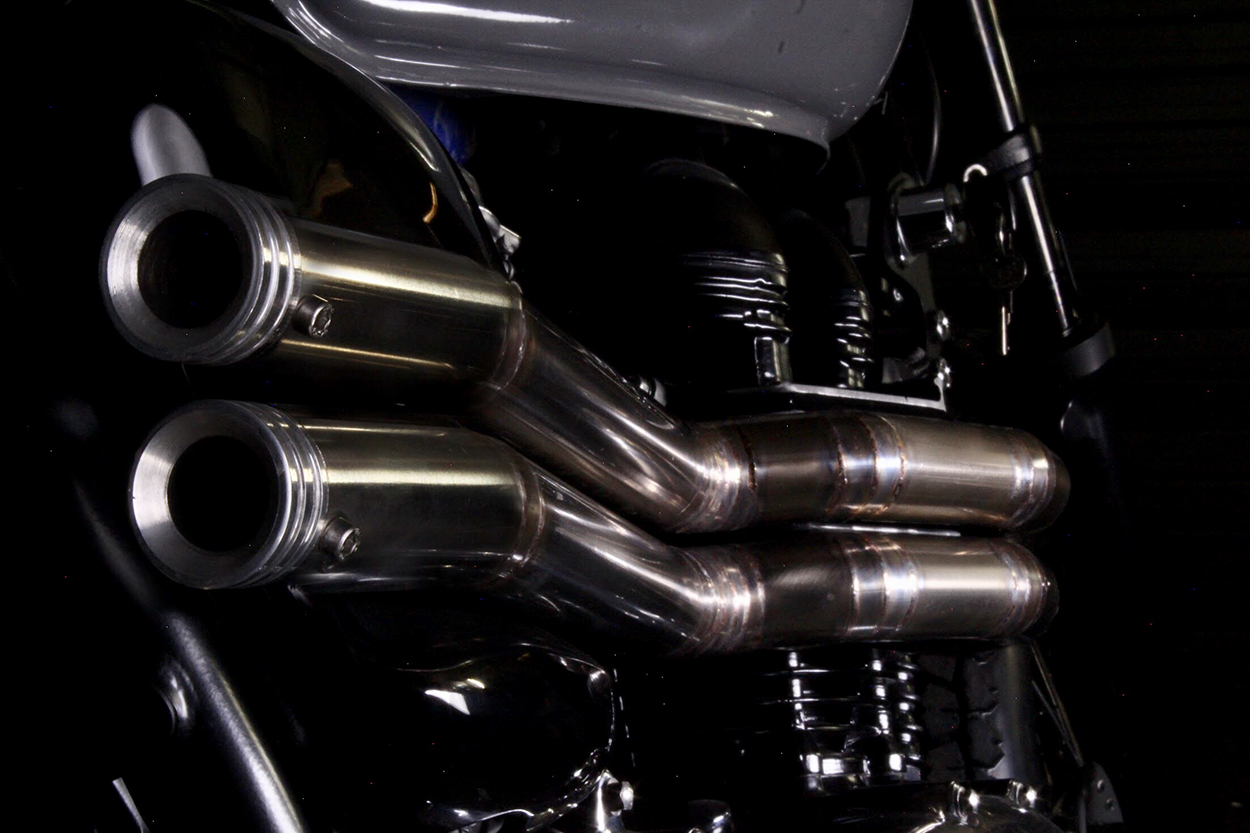 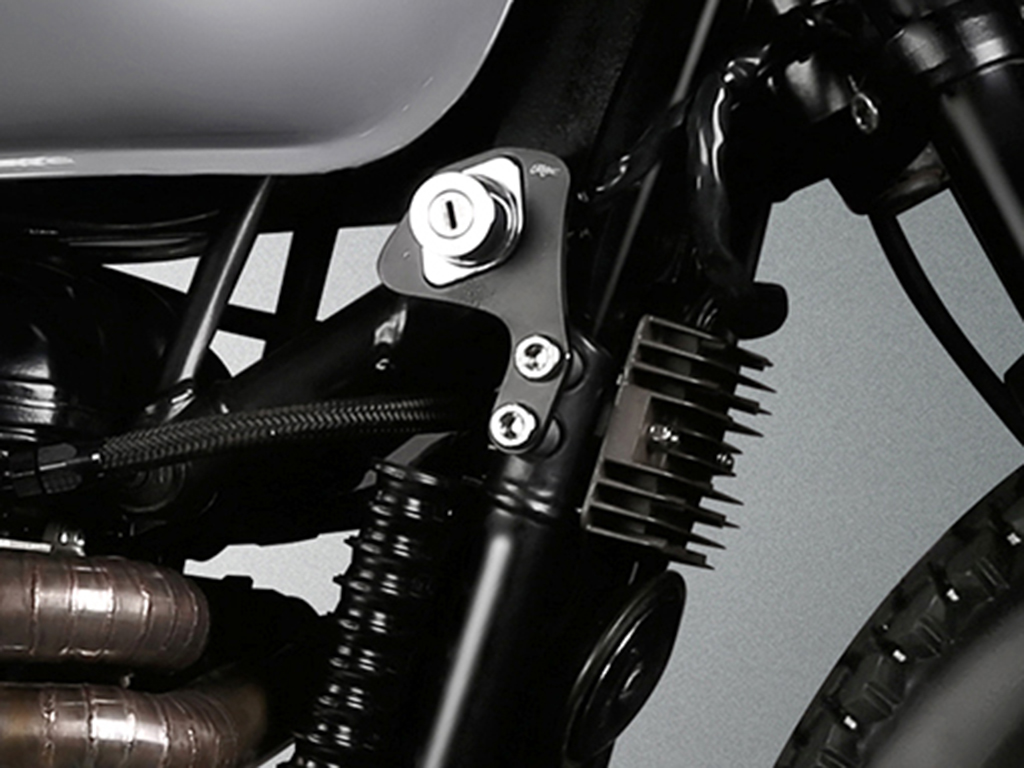 The finishing details on this Triumph T100 build include all the obligatory relocation brackets, which on this occasion come from Motone’s excellent catalogue of goodies – other details include black Earles Performance braided oil cooler lines, far more attractive than the hideous stock items and finally a set of Biltwell foot pegs. 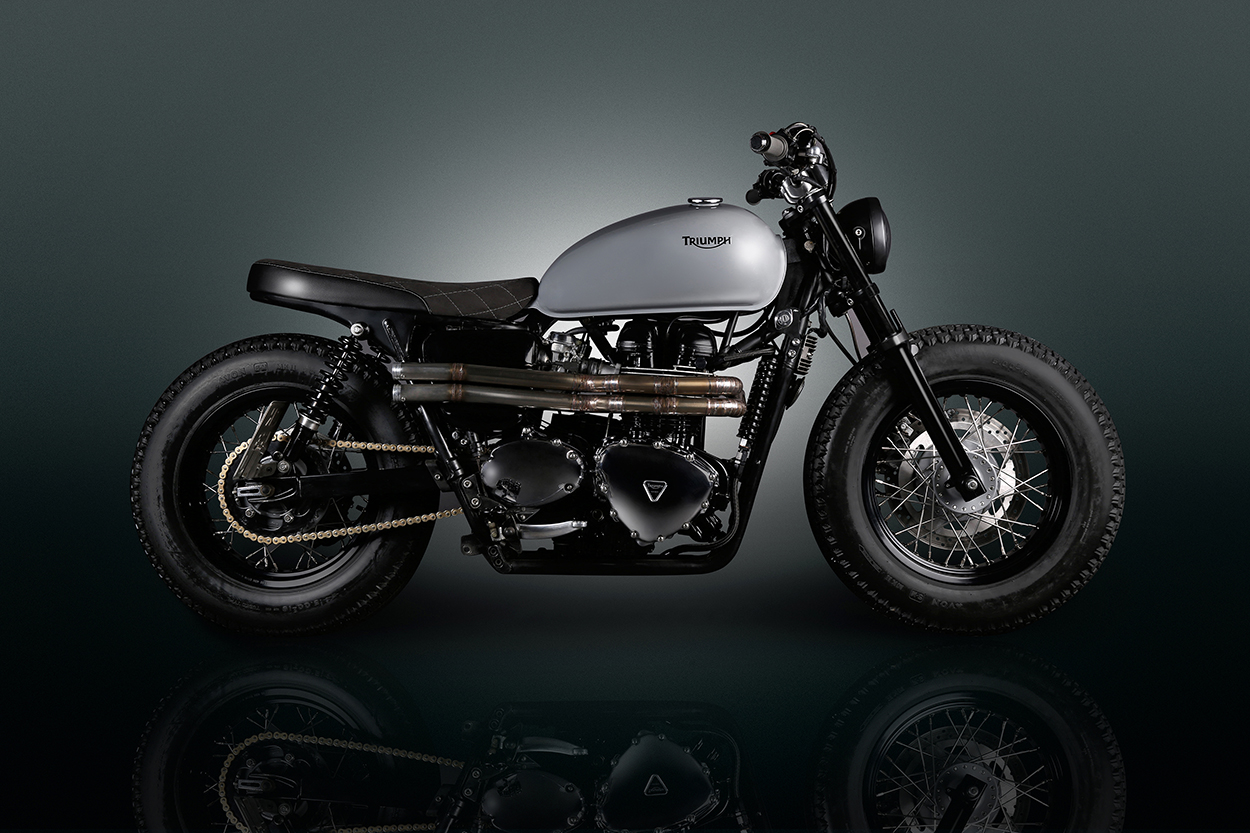 Having seen this build in the flesh at the Kickback motorcycle Show at Stoneleigh Park, I can say it is as accomplished as any that I have seen by older and more experienced builders. But unlike these other builders who already have a good reputation, its early days for Jody and Thornton Hundred Motorcycles, and only time will tell if there is to be longevity and consistency of quality.… I for one expect good things.

This build is for sale if you re intrested