The Bike of Eli 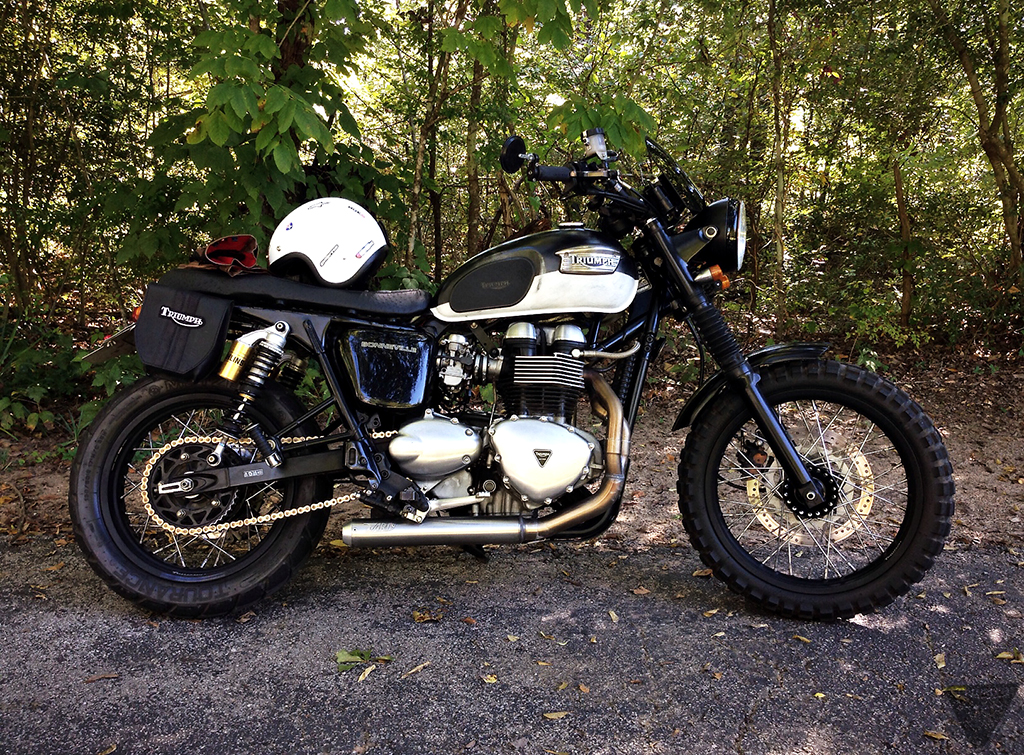 I do love the Triumph Scrambler, its retro styling and knobbly tyres just sells a lifestyle that many enjoyed in the 60’s. A world that featured names like ‘Baja,’ ‘Hare & Hound’ and the ‘ISDT’. The world of Bud Ekins and that fella from ‘Bullit’ and ‘On any Sunday’  It was a time when Triumph Motorcycles ruled the rugged West. 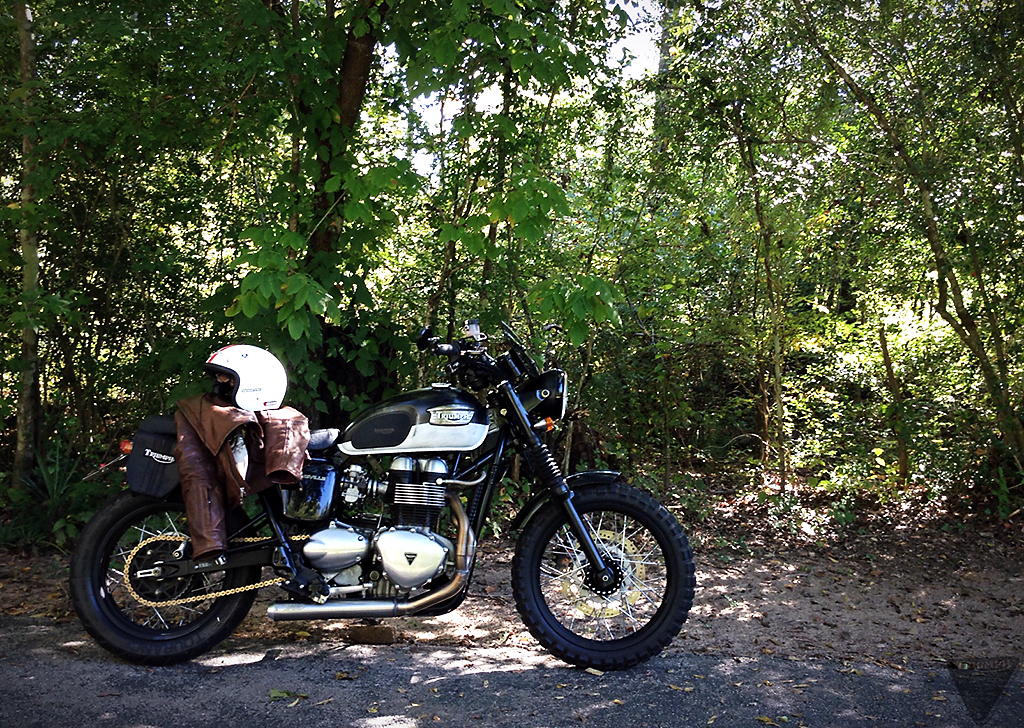 This particular Scrambler belongs to Eli Gautreaux a 43 year Christian minister from Texas (Sorry Eli, but I now picture you looking like Clint Eastwood from Pale rider but on a Triumph Scrambler) Eli has owned the 06 Scrambler since June of 2012. Picking the Scram up involved a ‘fly drive’ or that should be a ‘fly ride’ – which involved flying out to collect the bike and then a 500 mile return ride home. I did something similar when I picked up my 06 Scrambler, but that was only a 22mile round trip and it didn’t involve flying. On the 500 mile ride home, Eli knew that the Scrambler was a ‘keeper’. 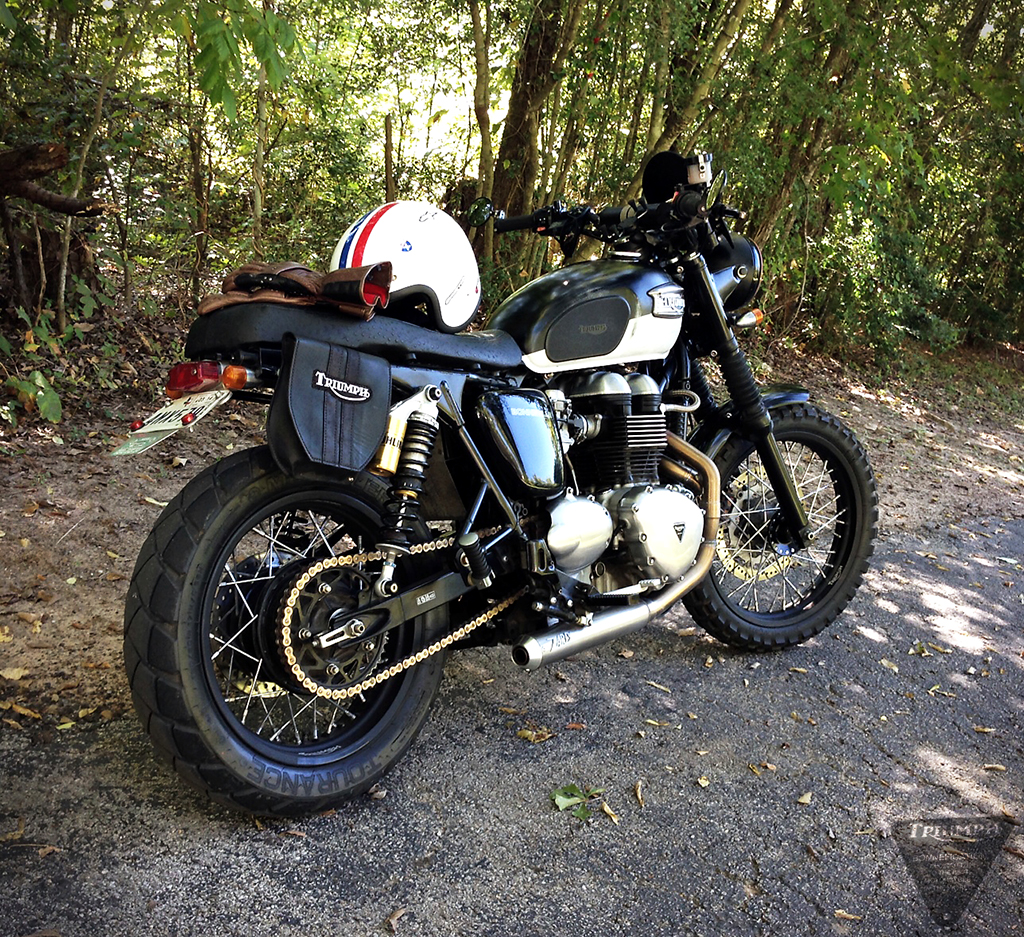 Being a Minister is a very public calling, so riding the Triumph gives Eli those important moments of solitude that many of us use to recharge our batteries or perhaps sole. Riding is fairly new to Eli, having not rode as a young man. Though his father was a keen motorcyclist but gave up motorcycles due the responsibilities of parenthood. Now that his children have grown up and taken on the responsible of adulthood, he now rides 04 Triumph Bonneville.

“We are both on Triumph twins. We are pretty much inseparable now, and having so much fun together. Schedules and weather permitting, we ride together every weekend, and take at least two trips a year”

Living in a small town in east Texas, Eli is fortunate to not have deal with a lot of traffic. The commute to the University where Eli ministers is only seven miles, a journey Eli takes regardless of the weather,  not because he has to, but because he ‘wants to’ – Since buying the Scrambler in 2012, Eli has clocked up over twenty-thousand miles, most of which was spent tearing up the farm, market and forests service roads of east Texas.

Eli has also taken the Scrambler to Colorado, Arkansas, North Carolina, Tennessee, Georgia and Virginia, sharing the trips with his wife who loves to ride pillion. The couple are currently planning a trip to Arizona and California.

Want to be featured on Bonnefication, then simply submit your bike here