As winter drew near and “new project” time got closer I decided to use this for a donor bike – something a little different from the norm, while being modern and reliable, and yet still cool. So I had a power plant, and no idea what to build around it. I did some research on 1900’s to 1930’s European bikes of all types and tried to make a mental note of what was cool. I suppose that the main things that stuck out were the tank style (loosely after a 1910 Triumph), the druid style front end, the knobbies, center stand, and friction steering dampener. 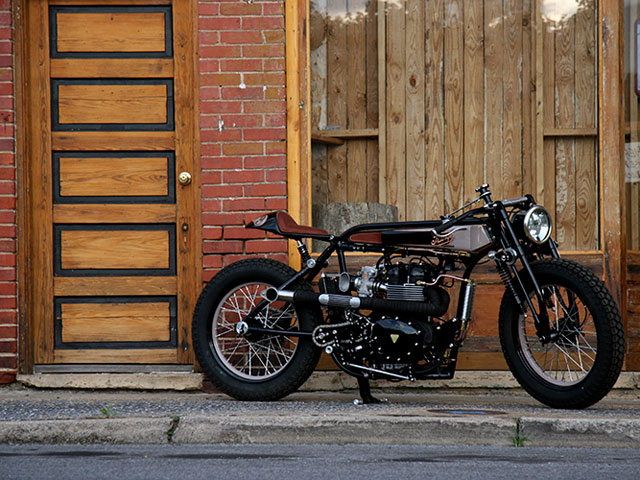 For the frame, I went with a lugged design for some extra detail, and made the cradle removable to help stick with that European style. I did the jackshafted drive to clean up the right side of the wheel, and really to just try something different. Once I got that figured out is when I decided to try a drum rear brake mounted to the jackshaft. I tried several old drums of different makes but nothing was quite right so I had to hunker down and make one. I wound up using aluminum, which I heat-shrunk a sleeve into. The real pain in the arse on this was making it all fit together without too much runout. 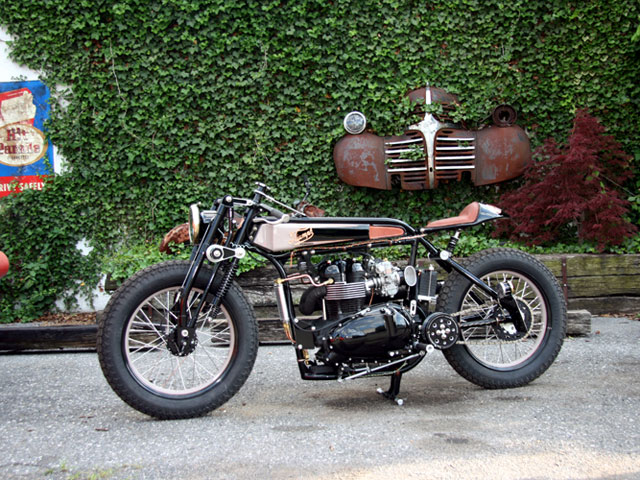 Early one Saturday morning I mounted a sort of traditional rear fender and bicycle seat. It was pretty cool but it just didn’t do it. Later that night I sat down with a print-out of the bike up on the table and started drawing. I loosely sketched the café boat tail thing, and SHIZAAM – it was awesome. I went to the shop the next morning and got started bending up some rod! I suppose this is where the whole project shifted gears from classy antique custom to 1900-ish café racer sort of thing. Race bike in mind, the 2-into-1 lakester pipes and drop bars fit naturally. Another thing I really wanted was inverted levers. Not wanting to copy what Dave Cook is famous for, I called him up and wound up getting away with the very first set of stainless levers he has ever made. 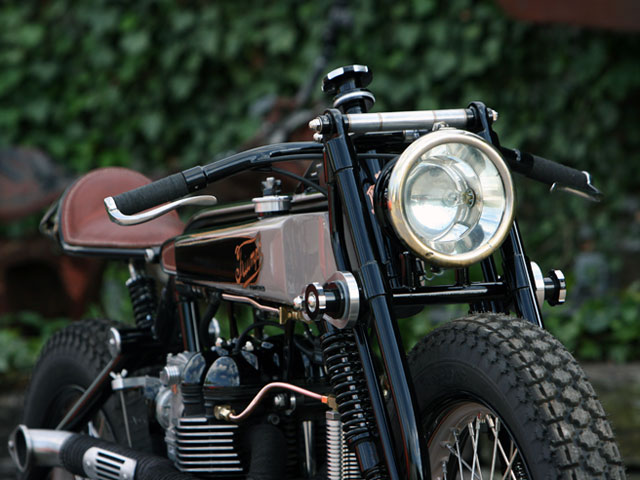 For paint I wanted to stay sort of scalloped style (Triumph thing). The logos on the tank are copper leaf versions of the 1910-1914 triumph logo. The “3” has nothing to do with NASCAR, this is my third complete bike build, and yes, the other two are numbered as well. My wife, Lindsay, and I spent evenings at the kitchen table doing the leather work. The wiring on this bike was probably the biggest challenge. A modern engine with all the emissions and safety crap has a wiring diagram that looks like a bowl of spaghetti noodles. At first I went through a lot of trouble to find someone who’d tackled the task before…..no luck. It seems everyone who’s ever done one of these simply stuffs the entire factory harness and all of its “mystery boxes” into a fake oil tank, which was not the route I wanted to take. I sat down with a factory diagram, the original harness, and a volt-ohm meter, around 30 or so hours later I had myself what is apparently the first ever chopper-style wiring schematic for a modern Triumph in existence. A lot of headaches, but I now have some pretty clean wiring that only uses what I need – no horn, no dimmer, no emissions, no safety crap, just good old spark, charging, and lights. — Jeremy Cupp, LC Fabrications