Bonnefication has always supported the home grown and shed built bikes which make up the custom and modified Triumph Twin scene. A scene which is about passion and a love for the Triumph brand.  It is a group made up of like minded individuals, most of whom are amateur builders, men and women who want to take the ordinary and make it extraordinary. The big name builders are great, but lets be clear on this…. pro builders are NOT the ‘scene‘, YOU are!

When I first started Bonnefication, people were just modifying the retro classic motorcycles to look a little different or to add more power, many of us did this in our own garages, sheds, driveways and back gardens. Now we are part of this ‘New Wave’ scene, a scene which big corporate companies are so keen to be seen being involved with. Is this good for those of us that feel we are not ‘new wave’, trendy or cool, only time will tell. 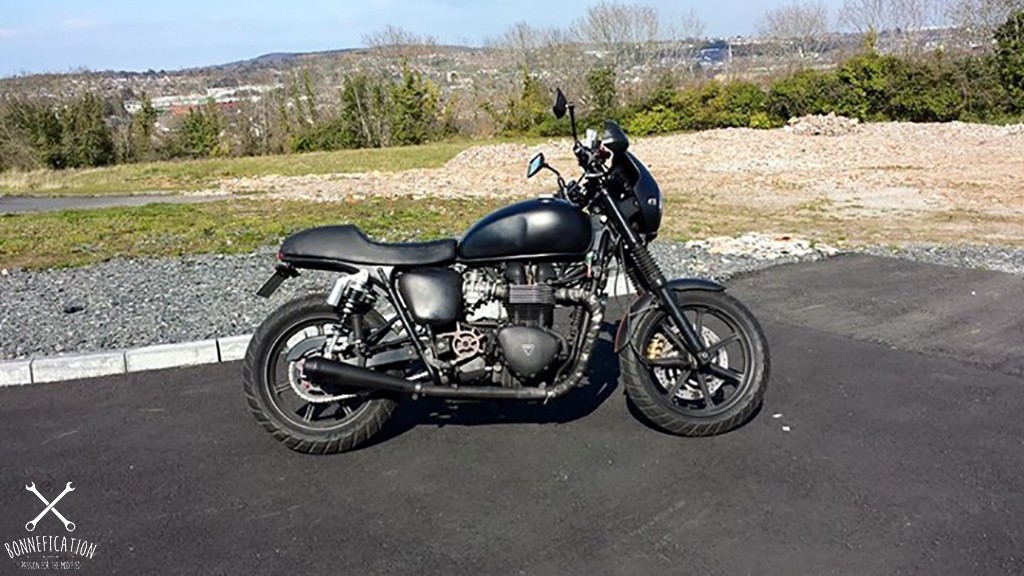 Bike Model: Bonneville “Imphal” Year:2010 Modifications: Honda 900 Hornet front brake, progressive springs, Gas shocks, Avon Distanzias 120/70/17 F 150/70/17 R, led headlight, change of bars, grips, and levers, Brake reservoir, Barkbusters, O2 removed, AI removed, K&N freeflow Air filter, Freeflow exhaust, downpipes from a speedmaster, LSL footpegs , LSL Chainguard, Seat from British Customs, rear brake caliper relocated above swingarm, custom Regimental colours paint scheme. There’s not a lot left that’s original and what I could do I can’t afford. I bought the Bonnie last March (2014) with the intention of doing a few modifications, I’m still customizing, ImphaL has had a substantial diet and lost in the region of 20kg. The last two pictures were taken today, its awaiting shorty mufflers, NOT silencers if I put the fly screen on I have to change the headlight back to the original, a 15 minute job. ImphaL is a part of me, it is the embodiment of my 22 years in the Army, it is the work of my life, ridden every day no matter what the weather. As to where I ride, I live in Northern Ireland I ride everywhere and anywhere.

Bike Model: Bonneville Year: 2008 carburetor. Modifications: British Customs Predator Exhaust kit, Thruxton front disc brakes & rear shocks, Progressive fork spring kit, street tracker handle bars, lots of little stuff including flip top Monza fuel cap. Tell us about the bike: I bought it used with most of the modifications already done. I’ve been making my imprint ever since. I was going to make it a Thruxton clone, but now like it the way it is. I grew up on dirt bikes and the Bonneville was always the classic street bike to own. This the the perfect bike for me. Air cooled, not a sled, not a sport bike with plastic covering everything, but just a good all around motorcycle that I can ride just about everyday here on Florida where someone always comes up to talk about the bike.

Bike Model: Triumph Scrambler Year: 2013 Modifications: Simple and Basic. Affordable for everyone. Front- and rear fender, Blinker brackets rear from (Motone customs). Offcourse the slammer seat from BC, as wel as the sprocketcover. Tail-light by LSL Clubman. Handlebar also LSL X01. Barend Mirror bought by Mpartz.nl. Paintjob was done by Blom Motorcycles (Leusden, The Netherlands) i don’t know the color :)I think these simple ad-ons give the scrambler a nice look. I will do some more add-ons later on this season.

Bike Model: Triumph Bonneville Year: 2001 (15k miles) Modifications: fender eliminator, replaced rear 130 wheel with 180, smoked rims black, scorpion tires. DG Headers 2 to 1.  Lower bars, and a few other small things I can remember right now. Tell us about the bike: I bought it on Craigslist 2 years ago from a guy leaving the country.  It was fully stock.  I was riding it for about a month and it “threw” me off, breaking my shoulder in 6 places.  I now have a titanium plate, 12 screws, and some wire mesh holding it all together (pic included).  But I’m fine otherwise and still ride her every day.  Hard.

Bike Model: Triumph Bonneville Black Year: 2007 Modifications: D&D exhaust, Mule seat unit, Kawasaki 636 USD forks, Acewell Speedo LSL  – I live in Western Melbourne and love to ride the hills around the great dividing Range. I bought the bike as a standard 2007 Bonneville black back in 2009. I’m not a fan of chrome and plastic so started the plan to transform the bike to a Flat tracker / Scrambler. I’ve changed the bars, headlight, mirrors,Front forks to a kawasaki 636 with a free spirit triple tree, seat unit from Mule, powder coated the wheels and gas cap, Gazi rear shocks, D & D exhaust.    Next job the engine!

Bike Model: Triumph Scrambler Year: 2013 Modifications: Arrow 2-into-1 exhaust, British Customs leather seat, Avon Road Runner street tires, CRG handle bar end mirrors, & various Triumph factory parts (seat rack, padded handle bar brace, billet gas cap, headlight protective screen) Tell us about the bike: Basically stock Scrambler, in flat graphite gray color, with a few personalized modifications. Tell us about you, what you love, why you do what you do and where you ride: Home is Chapel Hill, North Carolina USA. Most riding is just long day trips through the rural countryside. This is my second Scrambler, the first one I owned was the 2005 model when it was first (re)introduced. I have also owned 2 Thruxtrons and 5 Bonnevilles through the years. My newest is a 2015 basic Bonneville, in Lunar Silver, with the lower cast rims. Theater bike now has an Arrow 2-into-1 exhaust, bar end mirrors, and the left & right side covers have been repainted to color match the gas tank and fenders. 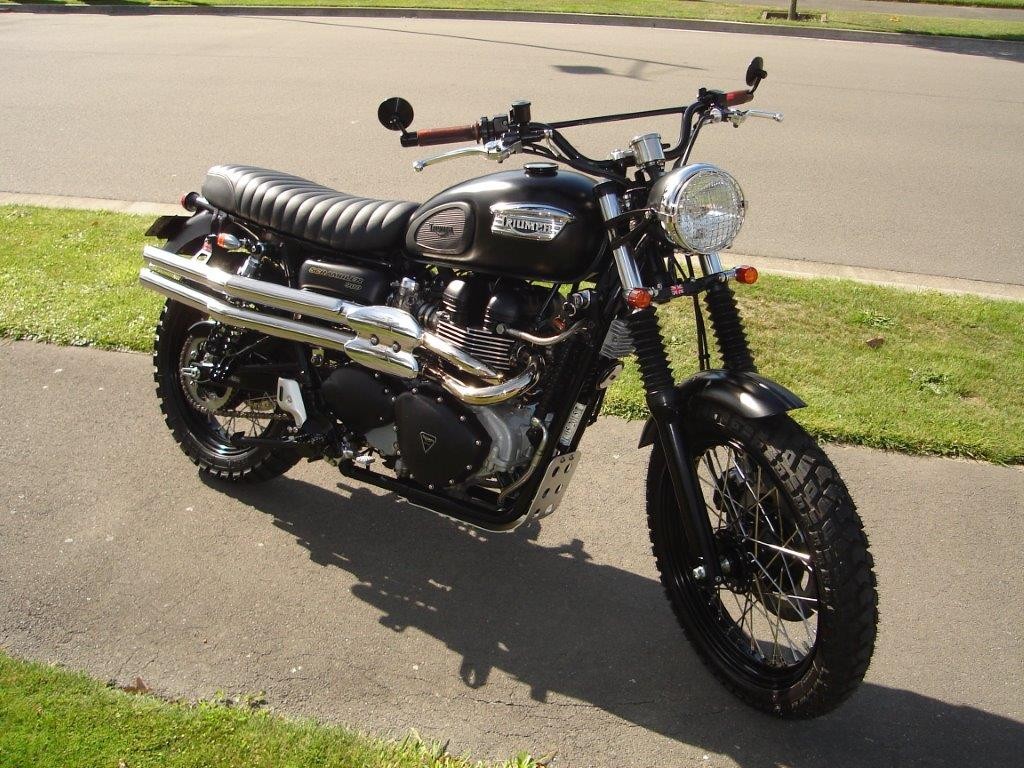 My bike started life as a T100 Black. 8 Ball Custom did the paintwork. I’ve wrapped the front pipes and powder coated the exhaust. Scrambler sump guard, 800 Tiger hand guards. Metal mule racking system, leather despatch rider pouch by Hart Leather Craft. Puig screen. Got a few more jobs to do to seat and suspension. I’m riding down to Fussen in September to where the Great Escape was filmed to take some pictures. I’ve got a 1050 Tiger and Thunderbird Sport in the garage too. Just ride for fun and pleasure. 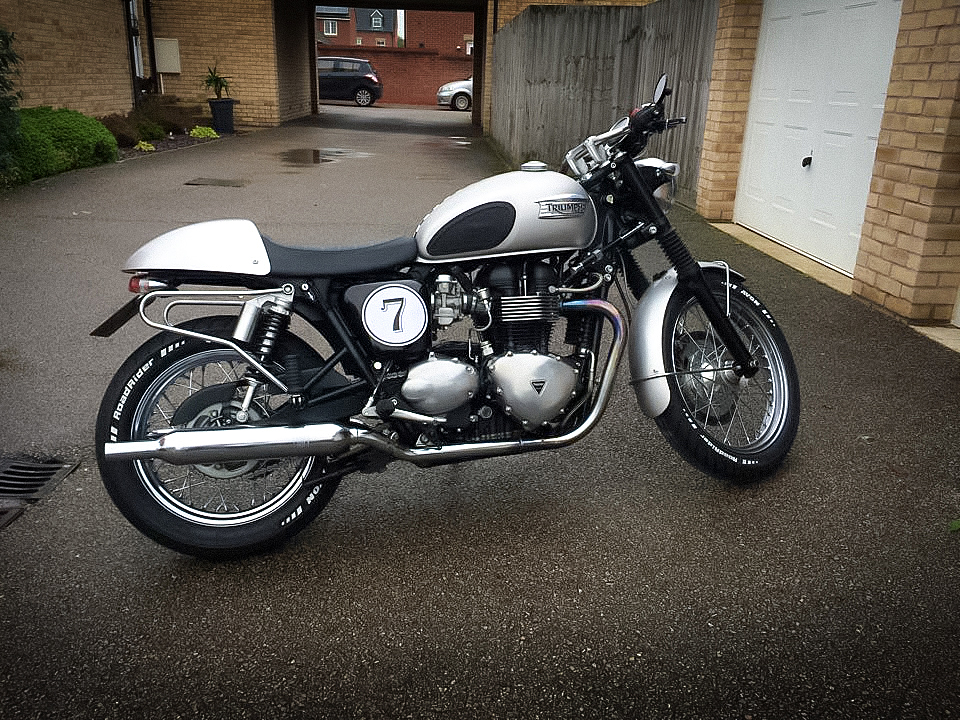