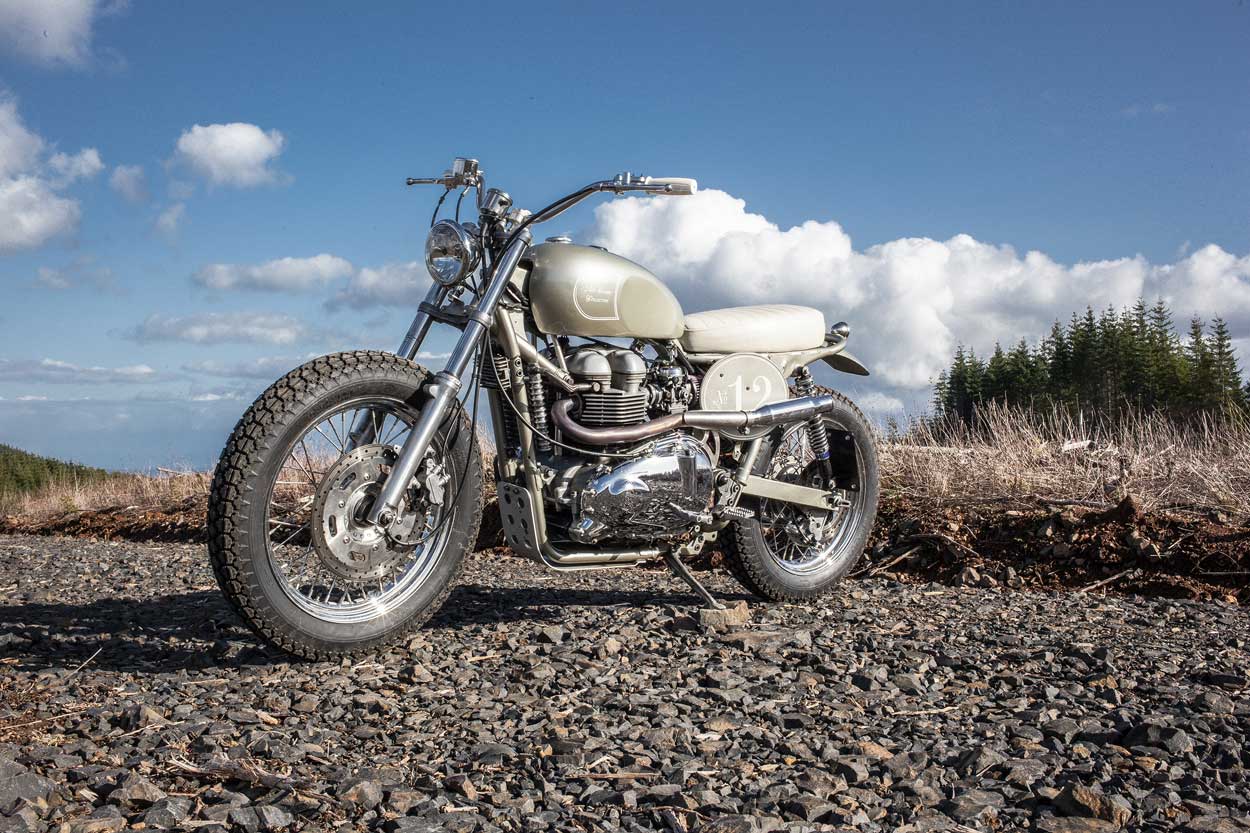 It’s no secret that Bonnefication is a huge enthusiast of the modified Triumph Twins built through the 1960’s by West Coast motorcycle dealers including Teds Triumphs and Bud Ekins. Super cool sleds ridden by all sorts of characters including the megastar Steve McQueen. Indeed, my own 2005 Scrambler Street Sled was inspired by a newspaper advert listing a plethora of period modifications, and photographs of McQueen’s very own Bud built Sled. 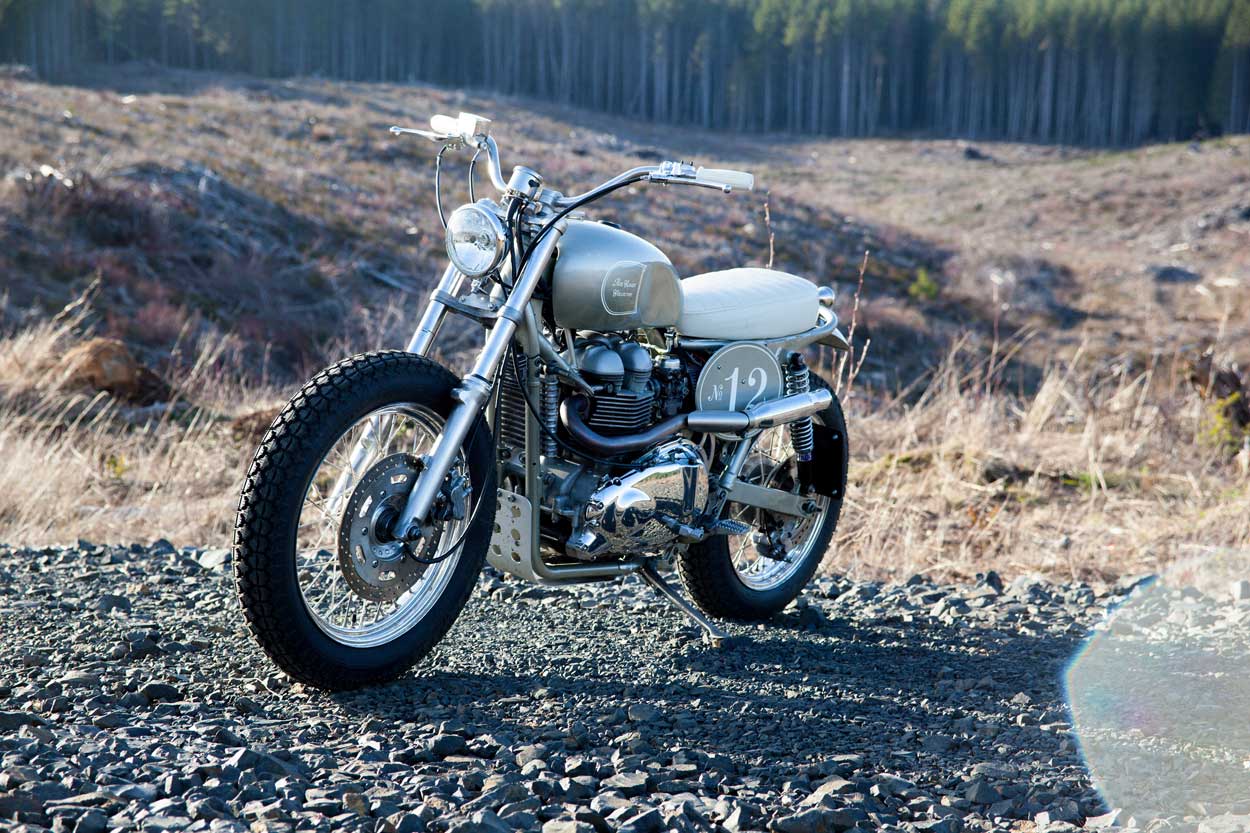 Our fascination with the Desert Sled style being so popular today, especially here in the UK and Europe, could be entirely attributed to the late actor for two reasons. Firstly, its Steve McQueen, and whatever McQueen did was cool. 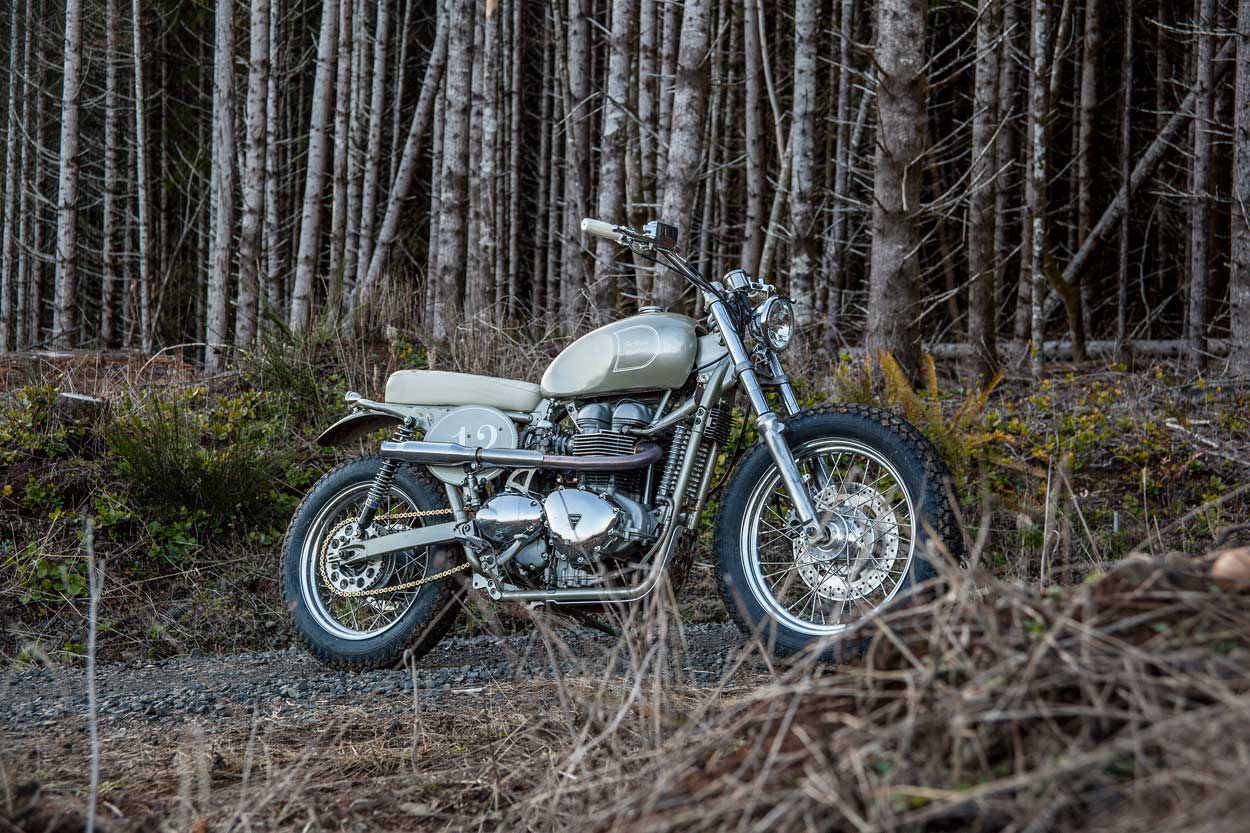 Secondly, as McQueen was such a big celebrity who really did race motorcycles and cars, his antics were often caught on film by photographers including William Claxton and John Domins, photographs destined for the pages of LIFE and TIME magazines.

Much later it was these now legendary photographs, which are such a fantastic and unique record of not only McQueen, but also the races and the motorcycles which Steve, Bud Ekins, and many like them, rode in, and rode on, which went on to inspire, and help those of us who previously knew nothing of Desert Racing or the motorcycles which took part, to build our own modern replicas. 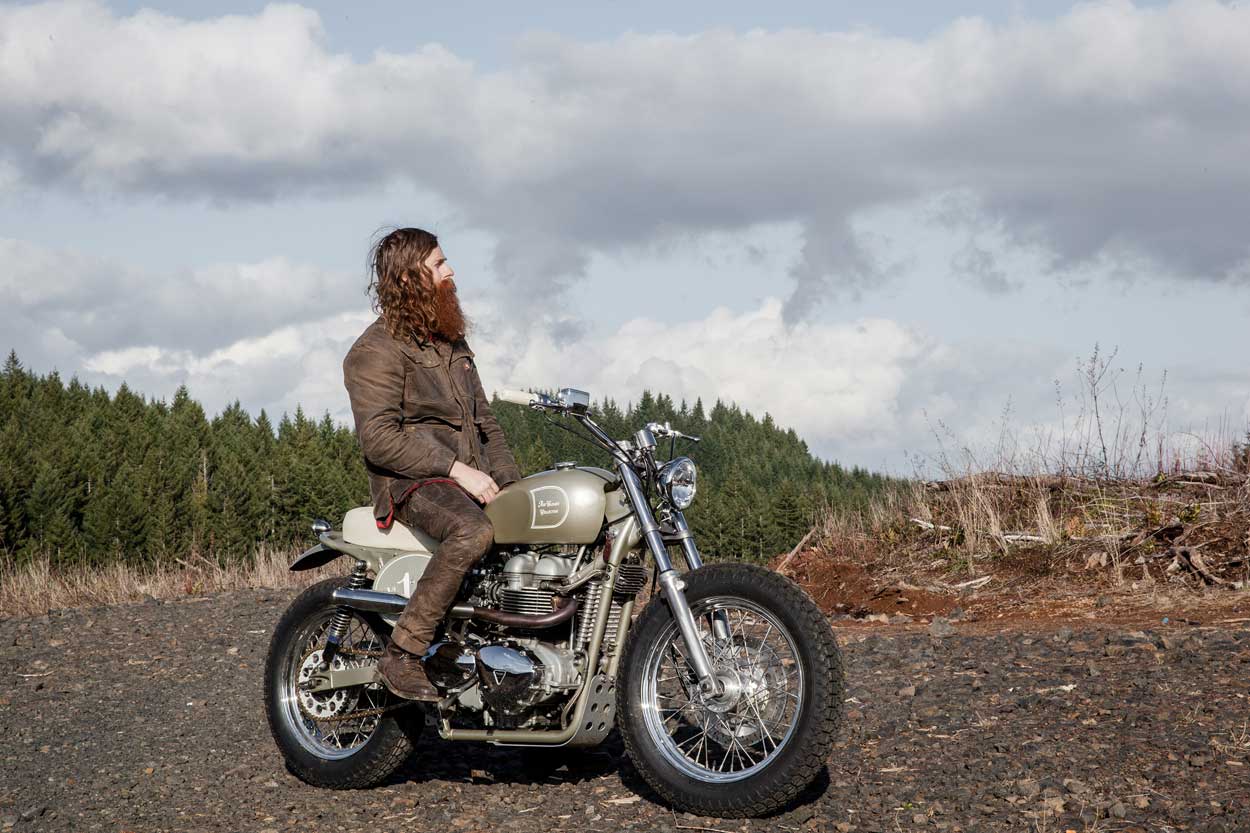 “The bikes that Bud Ekins and Steve McQueen are known for being so iconic and there is just this certain style that looks cool, fast and fun. The high pipes, wide bars, short seats and only the essentials left on the bike gives it a classy and aggressive stance. A motorcycle that is ready for whatever is in its path” 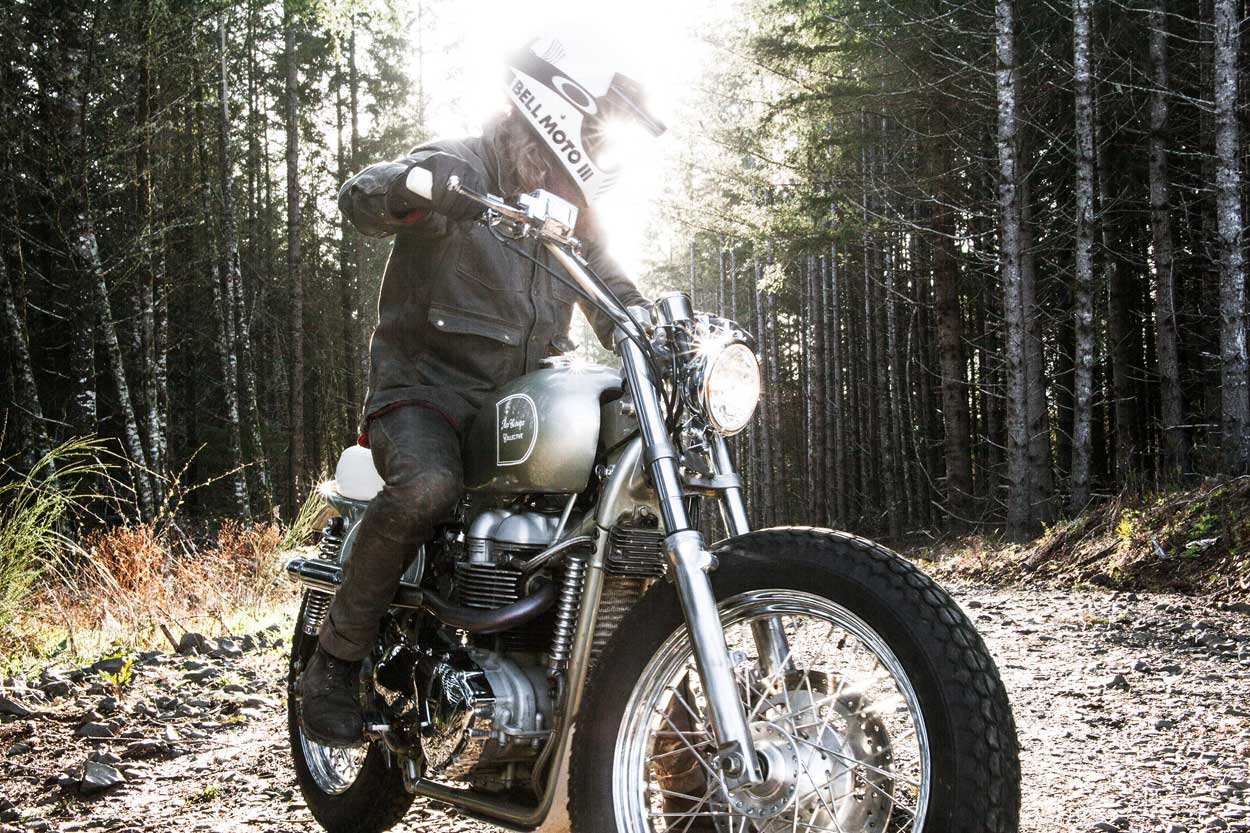 With original Triumph Desert Sleds being a rarity, regardless of model or pedigree, inevitably they have become collectable and costly to buy. Therefore turning one of the more plentiful, modern and dependable Hinckley Twins into a homage to those desert machines is the way forward, something which the Red Clouds Collective have done beautifully with this 2006 carb model Triumph Bonneville T100. 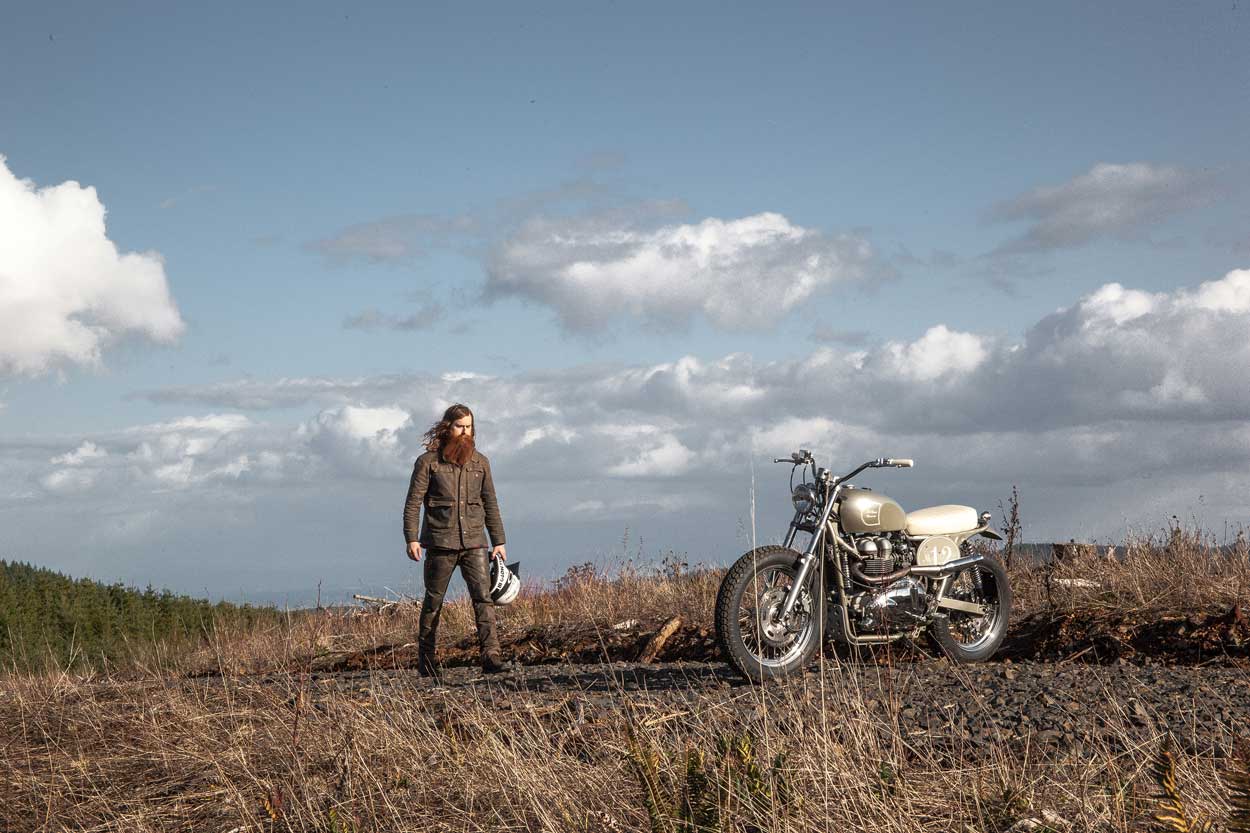 Based in Portland Oregon, the chaps at Red Clouds Collective usually spend their days making waxed canvas clothing, bags and various other leather products. But like many of us, in their spare time, they love nothing more than building their dream motorcycles. 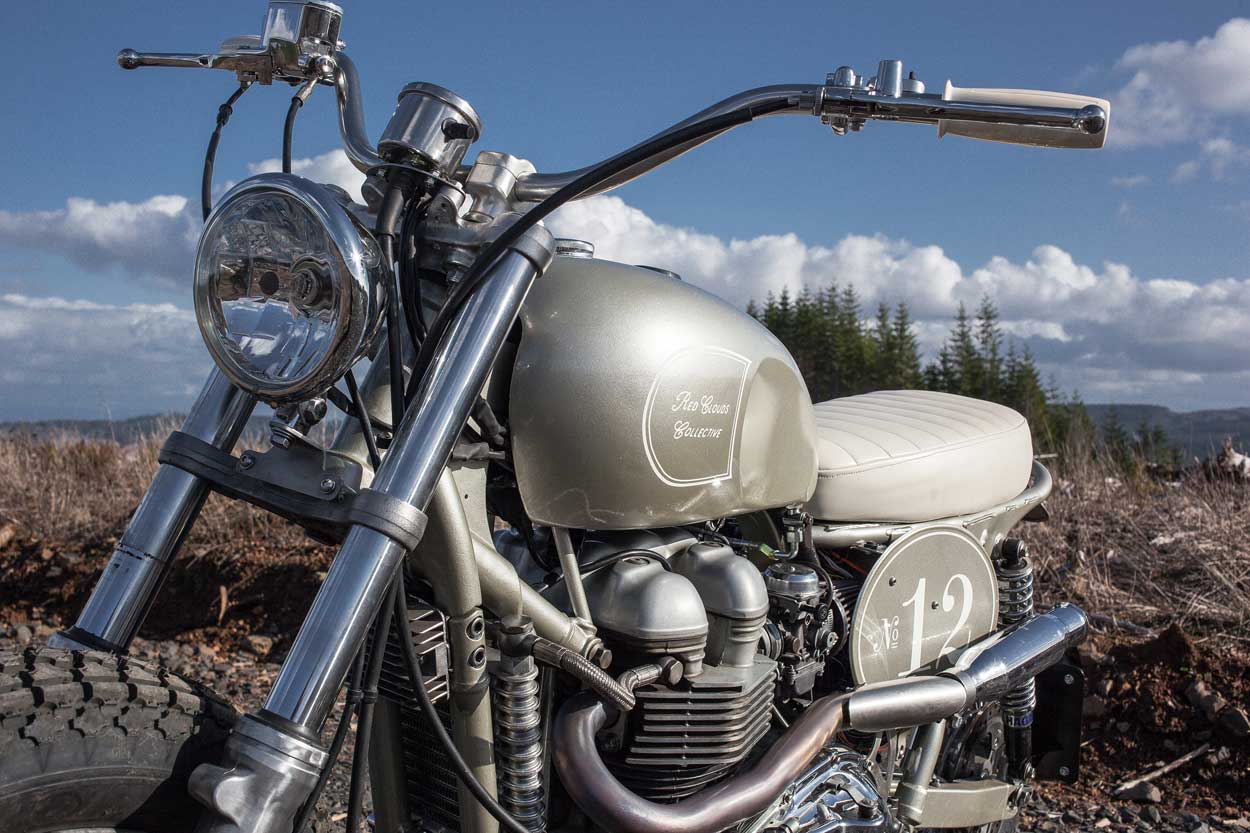 This Triumph Twin was stripped down to a rolling frame, leaving just the wheels and engine in situ. The T100 frame was then chopped, looped and relieved of its passenger foot-peg mounts, with an old mudguard then being modified and fitted to the shortened frame. 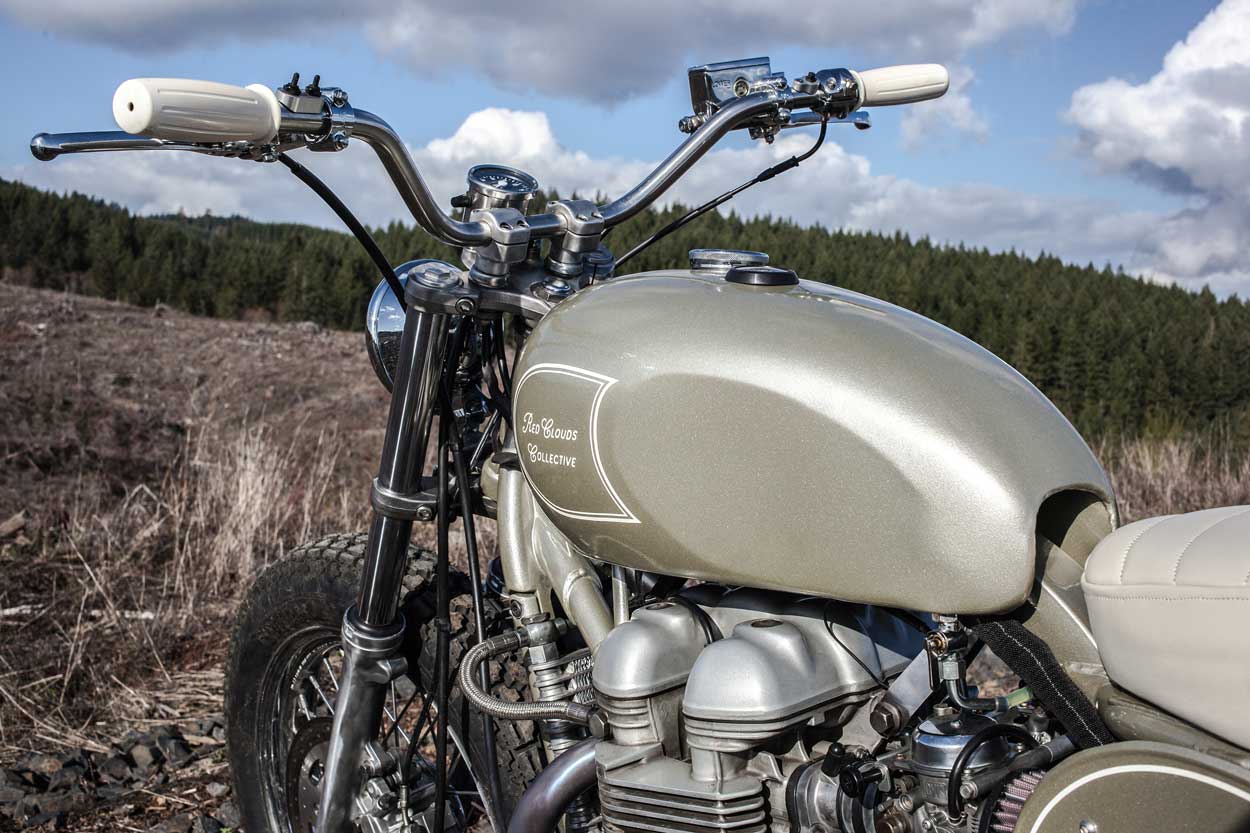 A dented and rusty1970’s Triumph Tank was sourced, reconditioned and made to fit the modern Hinckley frame, adding a very cool classic Triumph vibe. 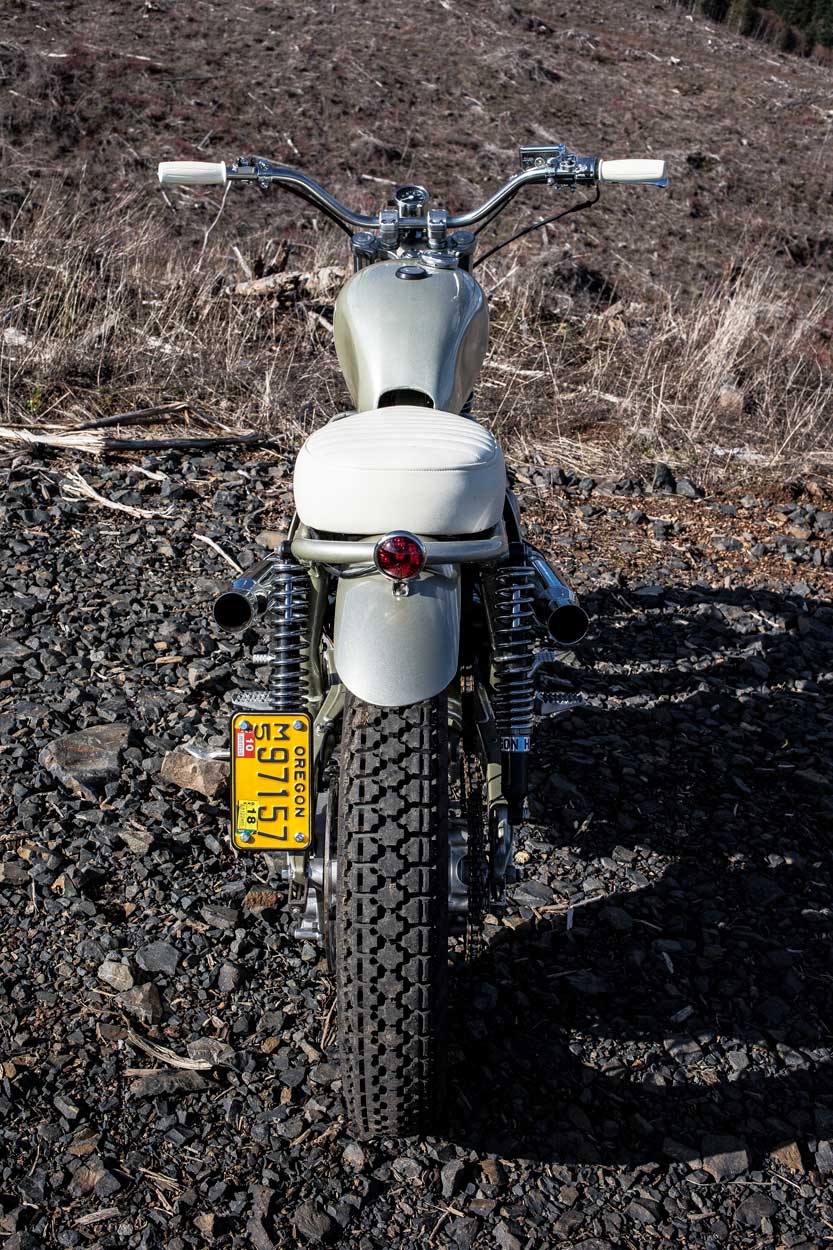 This, along with the frame, swing-arm and rear mudguard were then sent away to be powder coated in a very fetching and vintage light green-gold colour, with the vintage tank being topped off with Red Clouds Collective graphics. 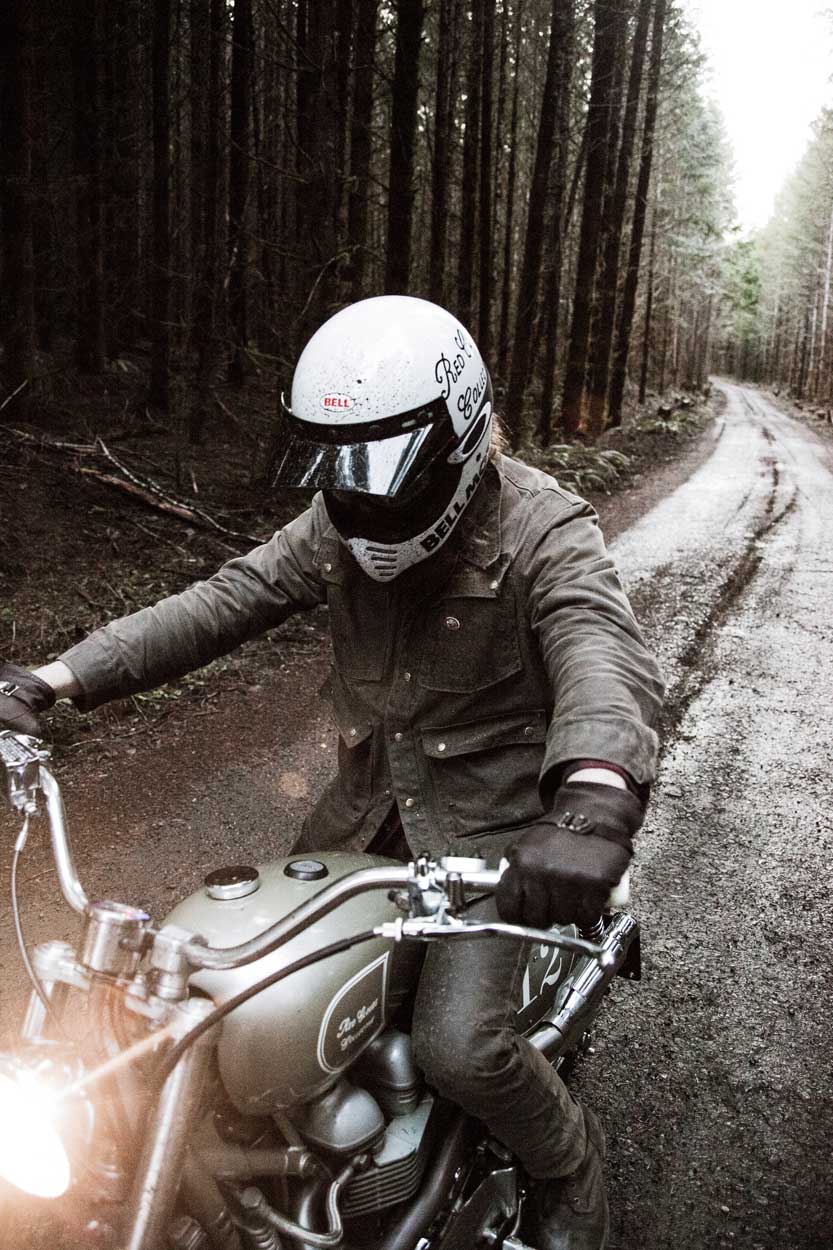 Back in the workshop, and now sitting on its stock wheels shod in vintage Firestone ANS Tyres, the rebuild began. The battery/airbox was ditched, replaced with an item from the American aftermarket parts and accessories manufacturer British Customs, who also supplied the skid plate, the various relocation brackets, and the classic two into two high pipes venting just aft of the custom number boards, sporting the number 12, a number which represents the year the Red Clouds Collective was founded. 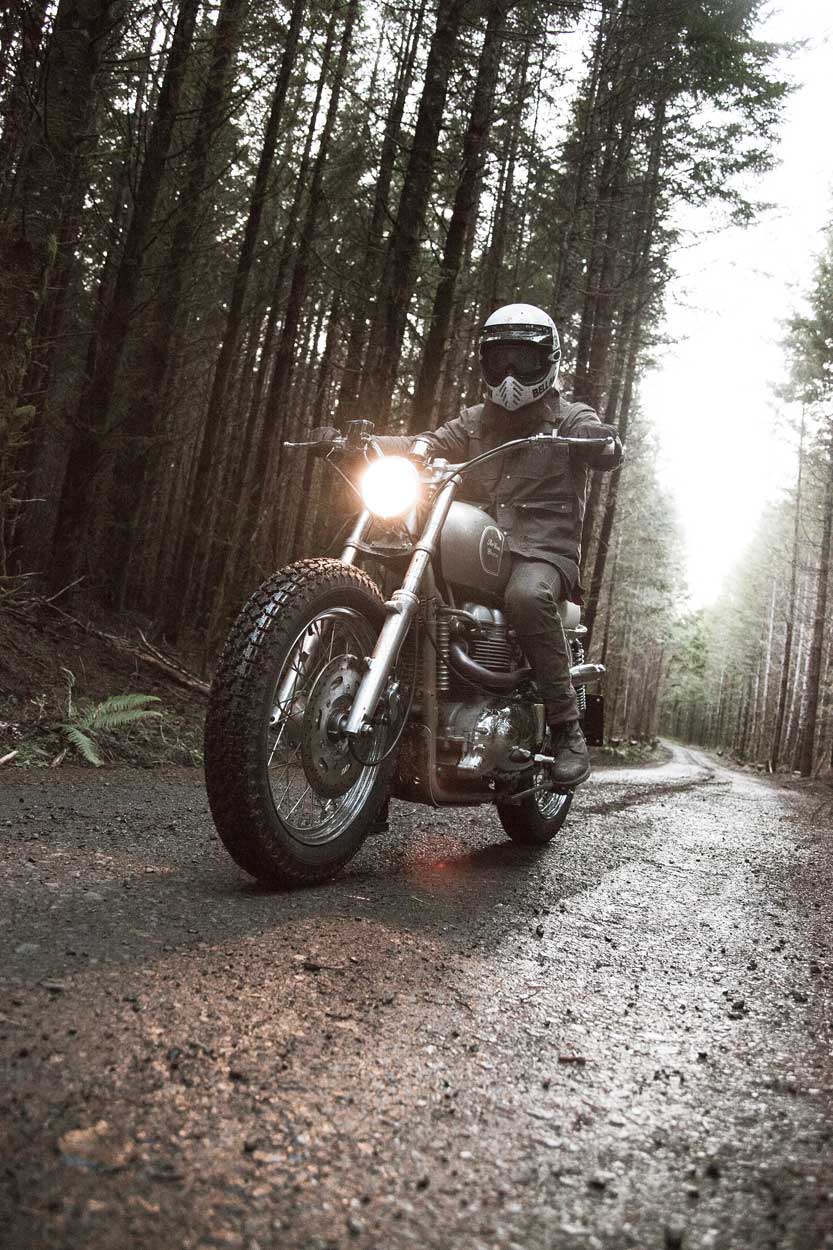 At the front is a chrome 5” bottom mounted bates style headlight mounted to the T100 stock yokes, which like the lower fork tubes, and anything else painted black have been stripped of paint and polished. The rear end hasn’t missed out on the action, with that powder coated rear mudguard being topped of with a chrome Shin-Yo LED tail light, and the stock rear shocks being ditched in favour of a set of Hagon’s. 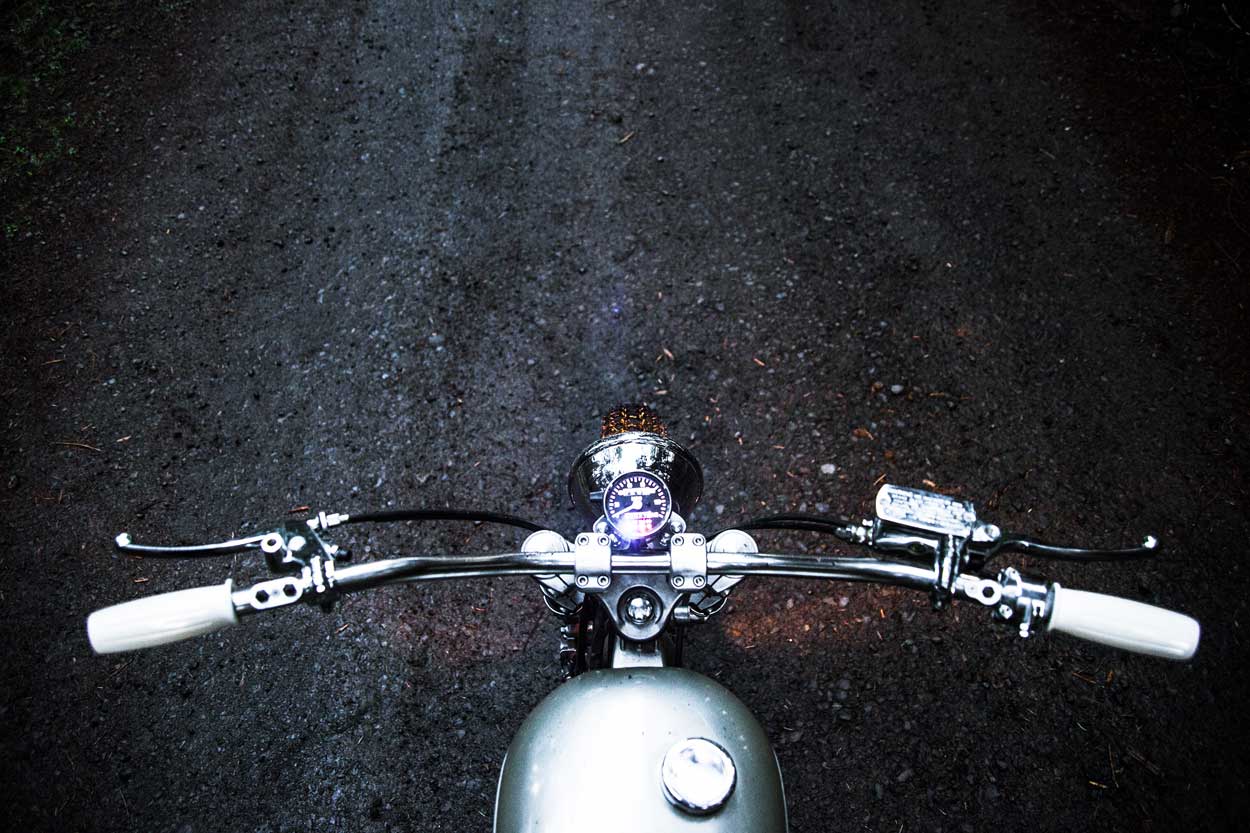 Up top is the ubiquitous XS650 mini speedo, and a custom made 35” wide, 5.5” pullback and 4.25” handlebars, crafted in 0.120” wall, DOM Stainless Steel by friends at One Down Four Up. Which the chaps at Red Clouds fitted with chrome levers and brake master cylinder, mini handlebar controls from See See Motorcycles, and white vintage grips. Grips which match the custom made, and heavily padded desert sled style Bates Scrambles seat a treat. 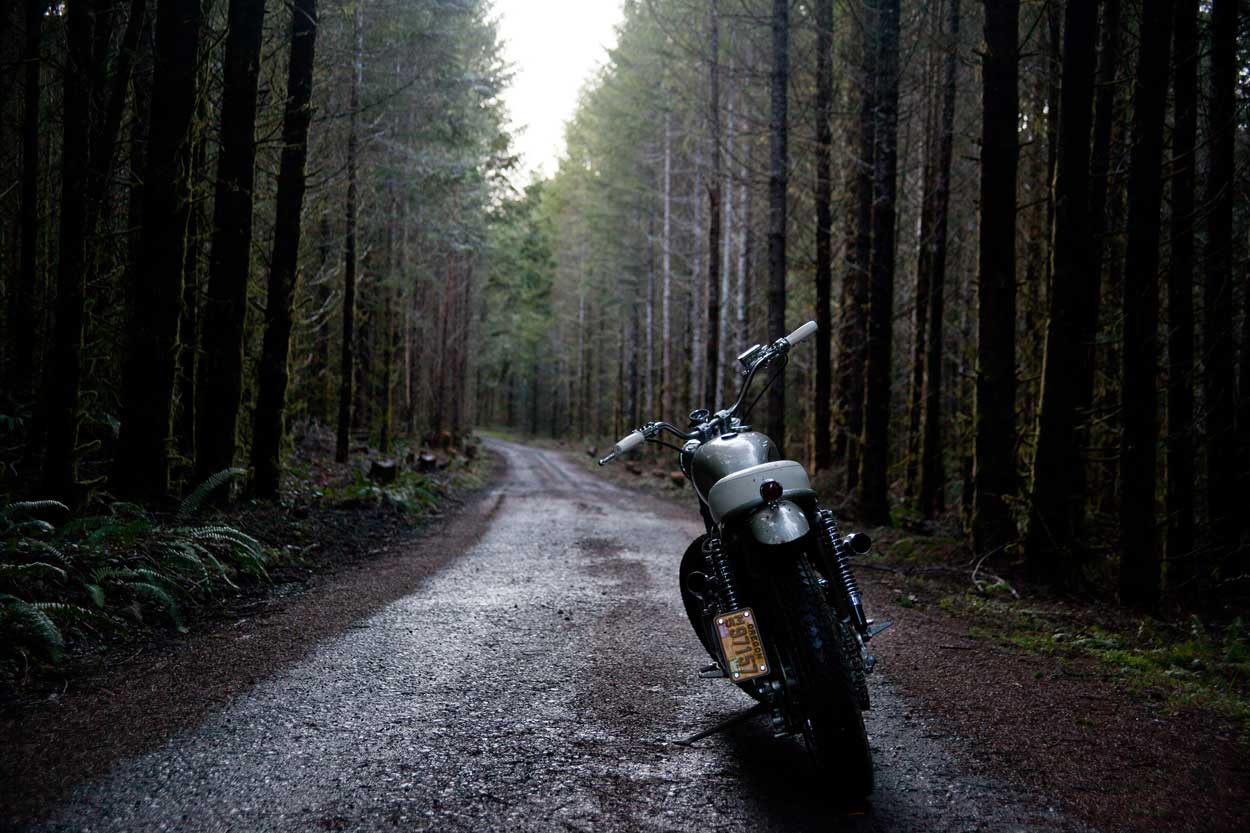 “We wanted to make this modern, dependable bike into a classic looking Triumph… 1960’s and 70’s Triumph’s are so perfect, especially the ones people would desert race. The bikes that Bud Ekins and Steve McQueen are known for are so iconic and there is just this certain style that looks cool, fast and fun”

I think you hit the nail on the head with this build guys!