Pascal Raspo of France based Raspo-Concepts has a long history of building motorcycles, though as a younger man Pascal was a Parisian firefighter, while also studying at the National Conservatoire national des arts et métiers to become an Engineer. After a career working in industrial risk, both home and abroad, Pascal turned his attention back to Motorcycles, opening a workshop in Paris in the 1990’s, tuning Super-Motards and making a name for himself. 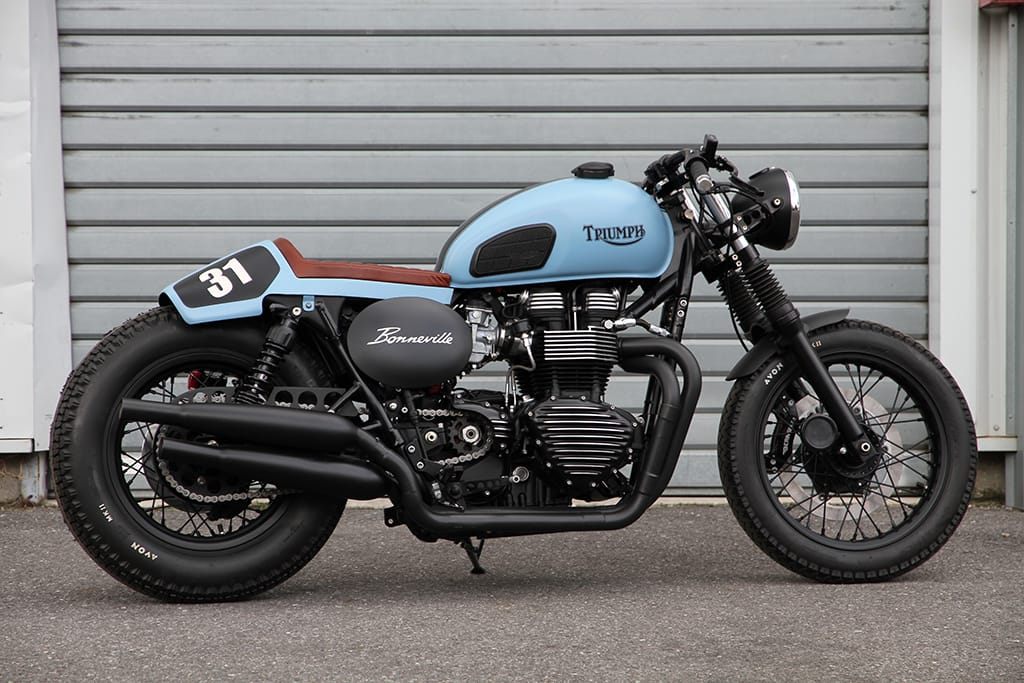 Some twenty years later Raspo-Concepts now resides in its new premises in Chelles in eastern Paris, building all sorts of motorcycles including custom Scramblers, Trackers and Café Racers such as the featured build, based on a EFI Bonneville T100. 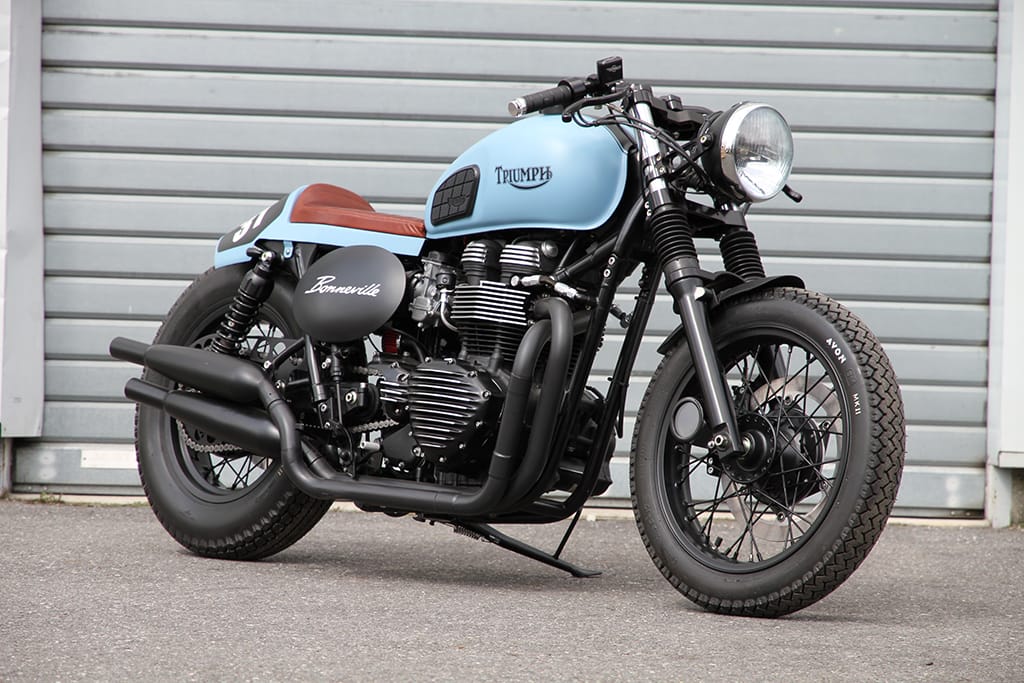 Its hard to miss such a distinctive café racer styled rear end, achieved by shortening the frame and crafting a custom seat cowl shaped from sheet aluminium. The cowl and tank were then painted by RRG (77) with the seat being upholstered in rich leather with the tank topped off with a Daytona gas cap. 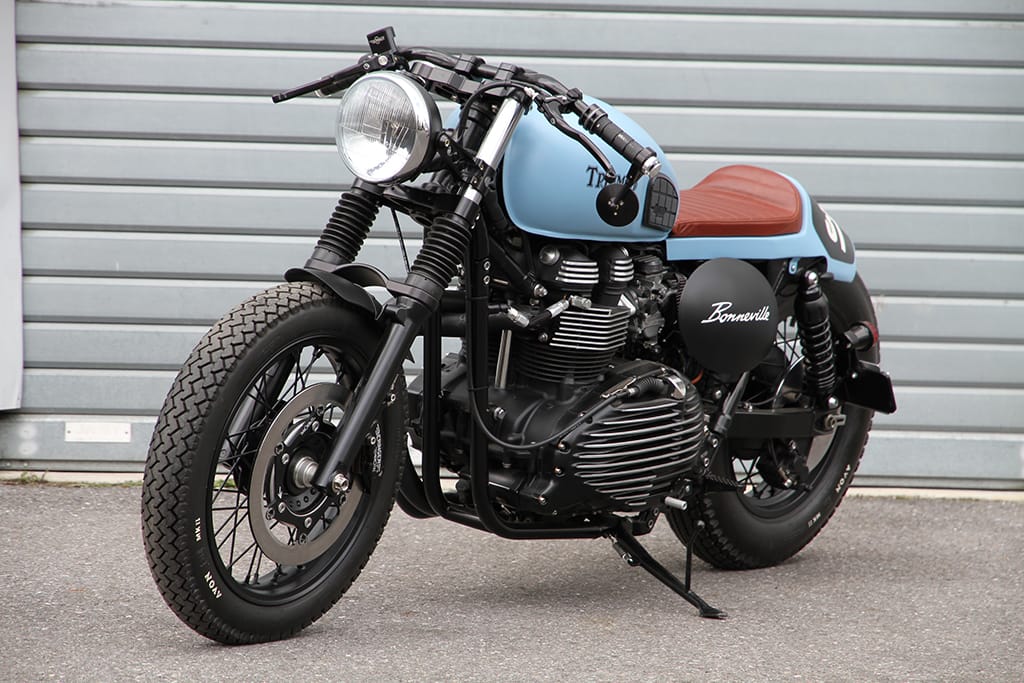 With the removal of the old tail section, the T100 was fitted with a smaller rear mudguard and retro side-mounted tail-light set-up, with the turn signals being replaced by mini LED items, and moved to the top shock mounts – up front, the stock signals have been swopped for a set of Motogadget m-blaze discs and relocated to the custom aluminium handlebars.

Bars that are also fitted with Motogadget m-switch mini’s, wired into a m-unit V2, which also supports the Motogadget m-lock keyless ignition system, allowing the owner of this Triumph Twin to jump on, check that all the right lights are illuminated on the Motogadget Tiny mounted into the Lucas style headlight, and Go!

The Bonneville now sports a Beringer 6 pot brake calliper with matching rotors front and rear, fed by Beringer levers and reservoir, now stopping this Triumph quickly wont be an issue! The T100’s stance has been changed with the fitting of shorter shocks and springs. 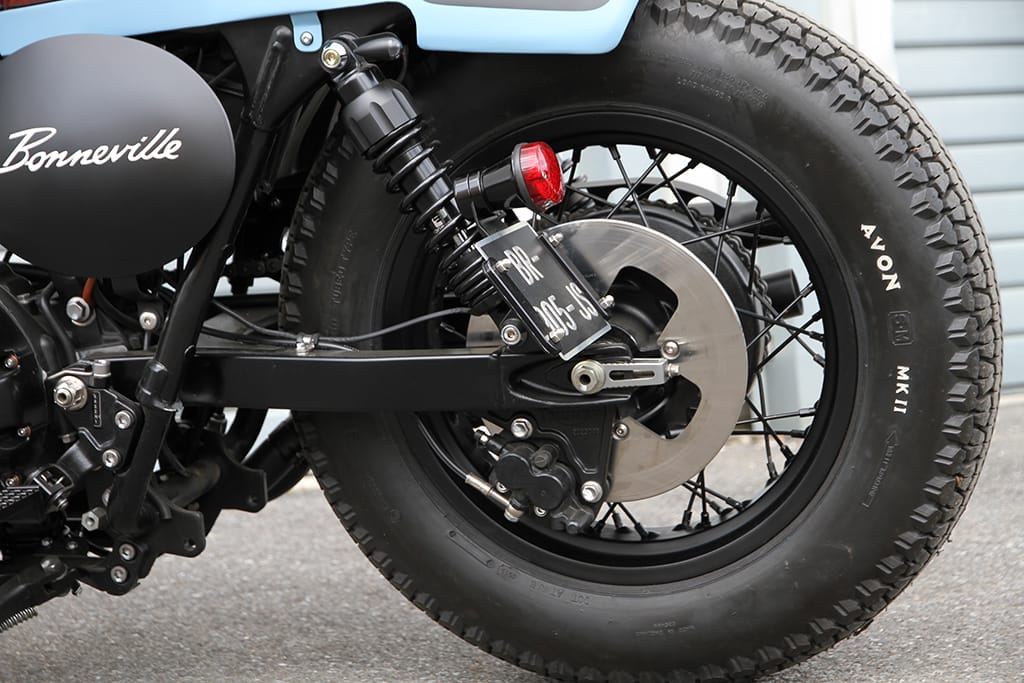 With the forks being fitted with custom CNC’d yokes, brace and mudguard. Adding to the retro vibe are black 17” front and 16” rear rims, laced to stock hubs and fitted with vintage appearing Avon Safety Mileage MkII tires. 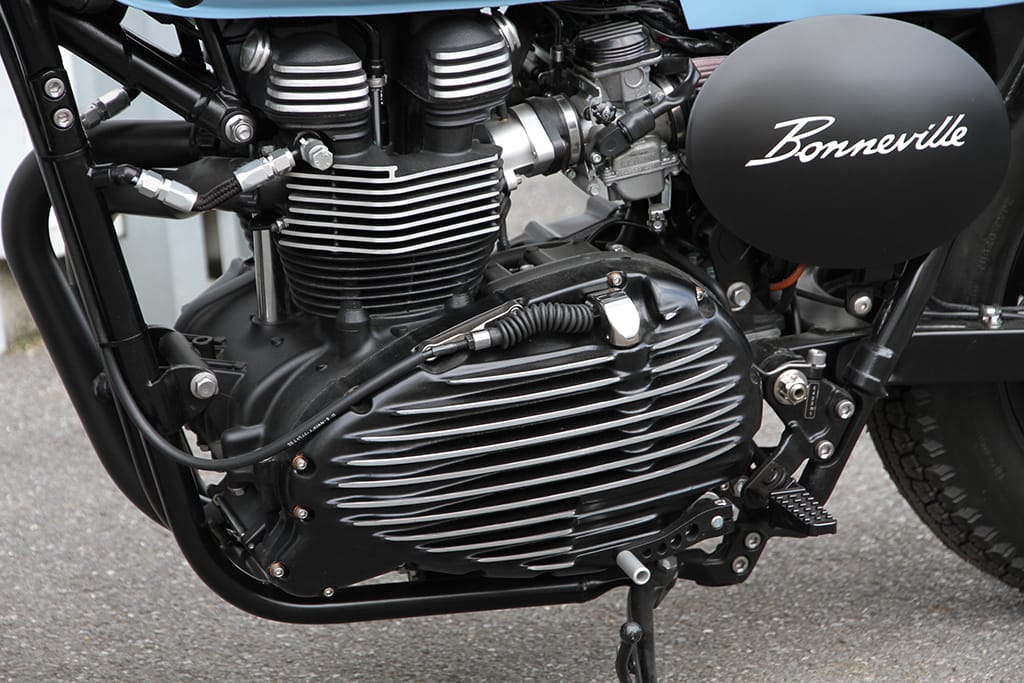 Much like the rear end, the engines side and sprocket covers are hard to miss – made in France by Esteves Motorcycle Design (EMD) which are not to be mistaken with those made by California based Speed Merchant, who also make a very similar product, so similar, I imagine only their respective manufactures could tell the difference. EMD also supplied the matching EFI injector body caps and cam cover. 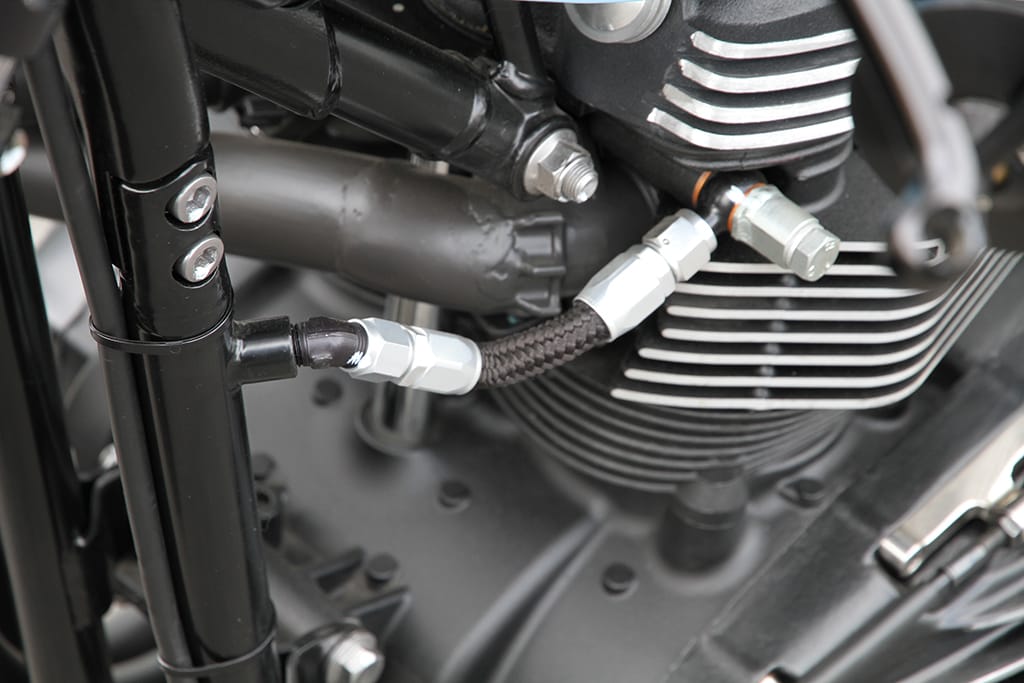 While looking at the 865cc air cooled engine, you may notice the ugly KTM branded oil cooler, which usually sits between the engine and frame cradles is missing. Some claim the Hinckley Twin engine is capable of running without the oil-cooler. Though this is not the case on this build – here the frame cradles have been plugged-up and modified into an in-frame oil cooler by Mule Motorcycles, this modification can actually improve the engines cooling.

Finishing this build off is a custom made black ceramic 2>2 exhaust systems, paired with K&N air-filters hiding behind custom aluminium side covers, with a Power Commander 5 keeping everything working nicely. Full build pics, which give a great insight into what when into this Triumph Cafe build can be found here.