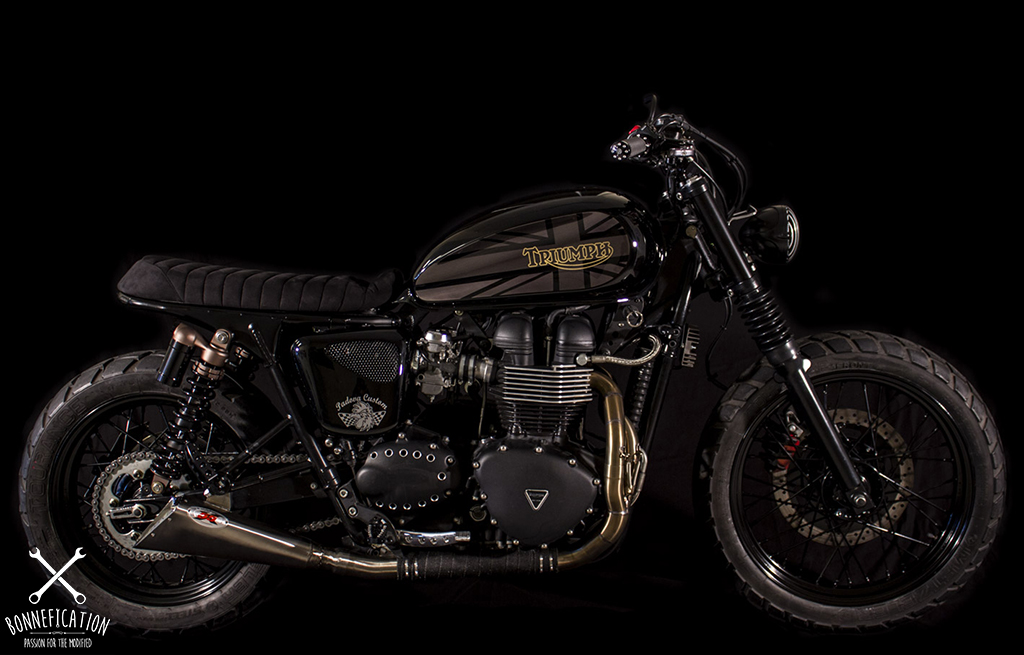 Padova Custom are based in Vigonza which is about 15 miles west of Venice Italy and is run by Leonardo Rampazzo a man with a ‘no chrome‘ policy when building motorcycles – builds which include the feature ‘Dark Resurrection‘ and Leonardo’s ‘British Army‘ a Triumph which looks as if it had served in the Libyan Deserts of WW2 rather than the Californian Desert of the nineteen sixties. Leonardo is also no stranger to other motorcycle brands having worked with Guzzi’s, Harley’s and Ducati’s. 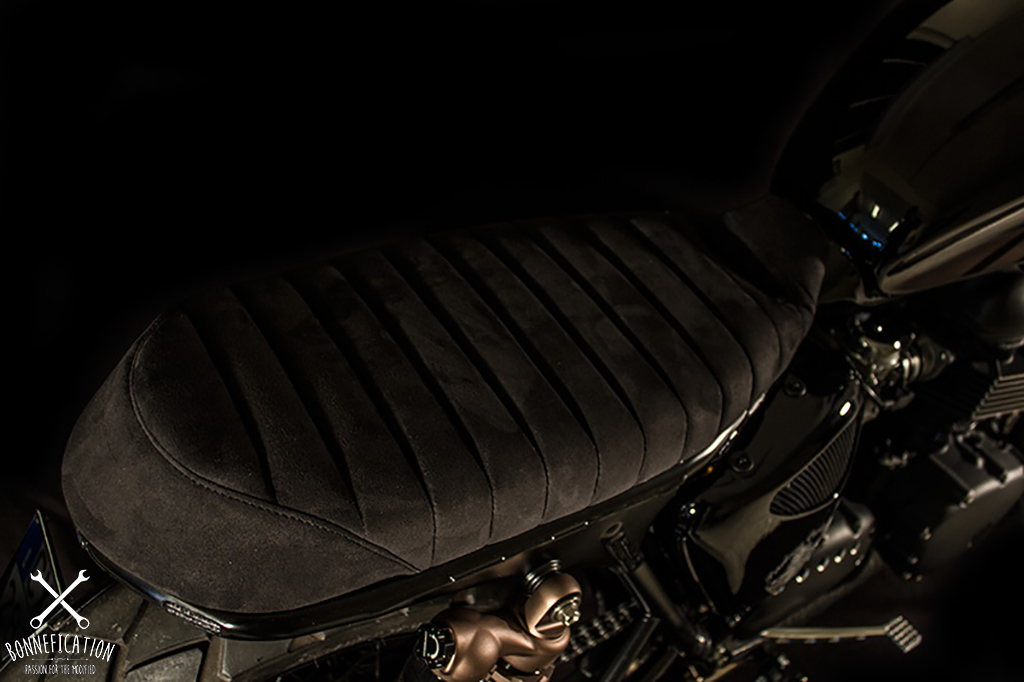 Dark Resurrection started life as a stock 2005 Bonneville which has had the usual modifications such as the addition of a frame loops which has been paired with the necessary leather custom seat. On this occasion there is no rear mudguard to speak  of with Leonardo opting instead for a bespoke fender eliminator. Clearly this Bonneville is not meant to be ridden on rainy days or on the dirt as the front mudguard has also gone missing – However impractical removing the mudguards is, a Triumph Twin is transformed into something much cooler and when you build a motorcycle called Dark Resurrection it needs to look the business. 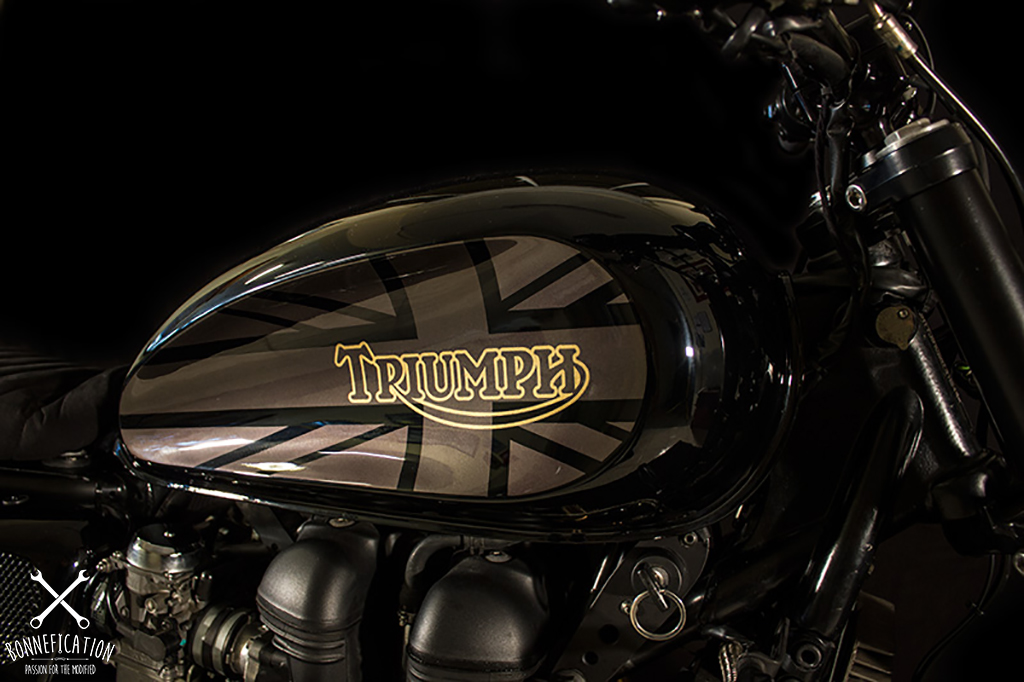 ……I see the bike in my head and I play as I see it. the bike that I create have to be very concise and read ….. everything must be proportionate …. and above all must function well and to entertain the owner. I can tell you that on the road and ‘very light and wonderful ride …….. 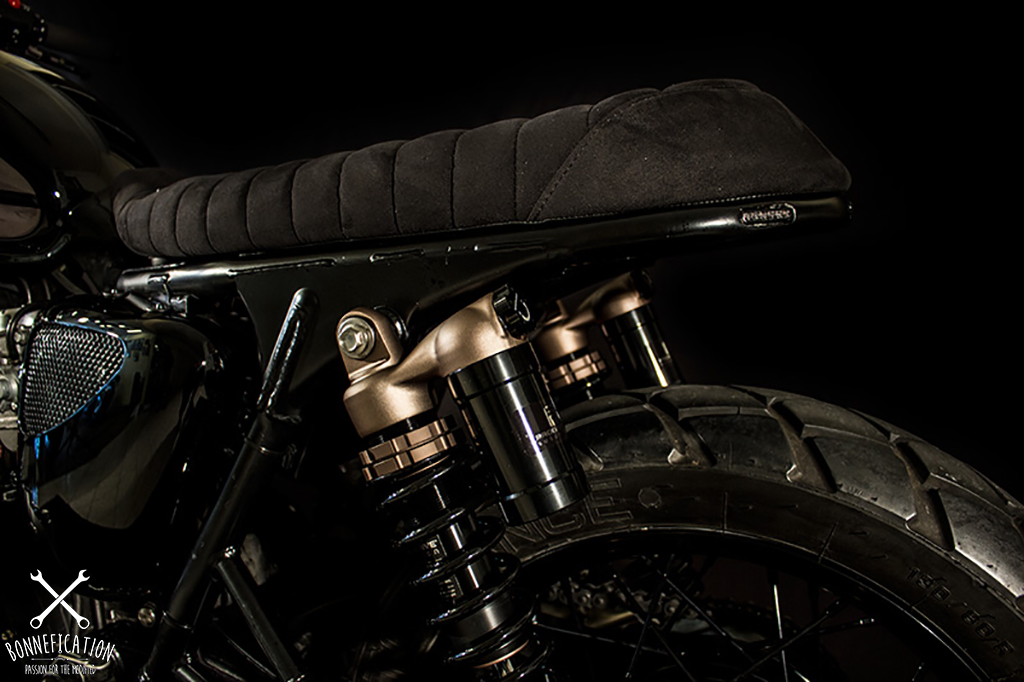 With the rear mudguard being lost in the rebuild, the tail-light has been replaced with a compact LED unit which has been fitted into the frame loop. Personally I think this is a big improvement on the popular Shin-Yo, Bates style LED tail light seen on so many build and an alternative which I’m sure we will see ever more of in the future. The front light on the Resurrection has been replaced with an appropriately named ‘Crime Scene Chopper’, a bottom mounted headlight with a grilled guard, a light which was also fitted to the Iron Pirate Garage T100 we feature last month. 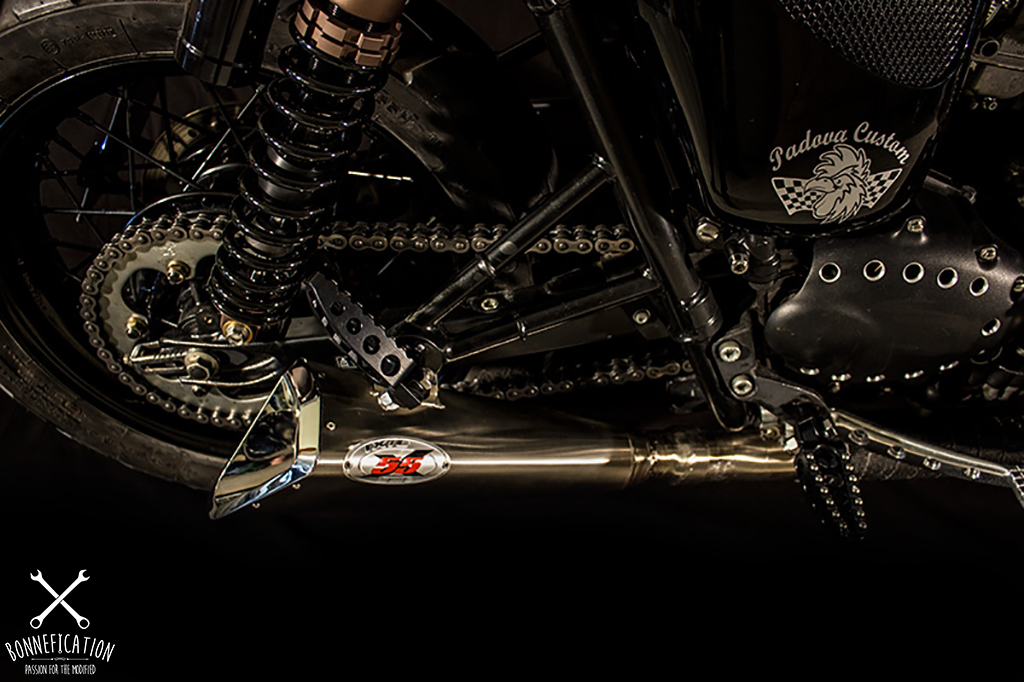 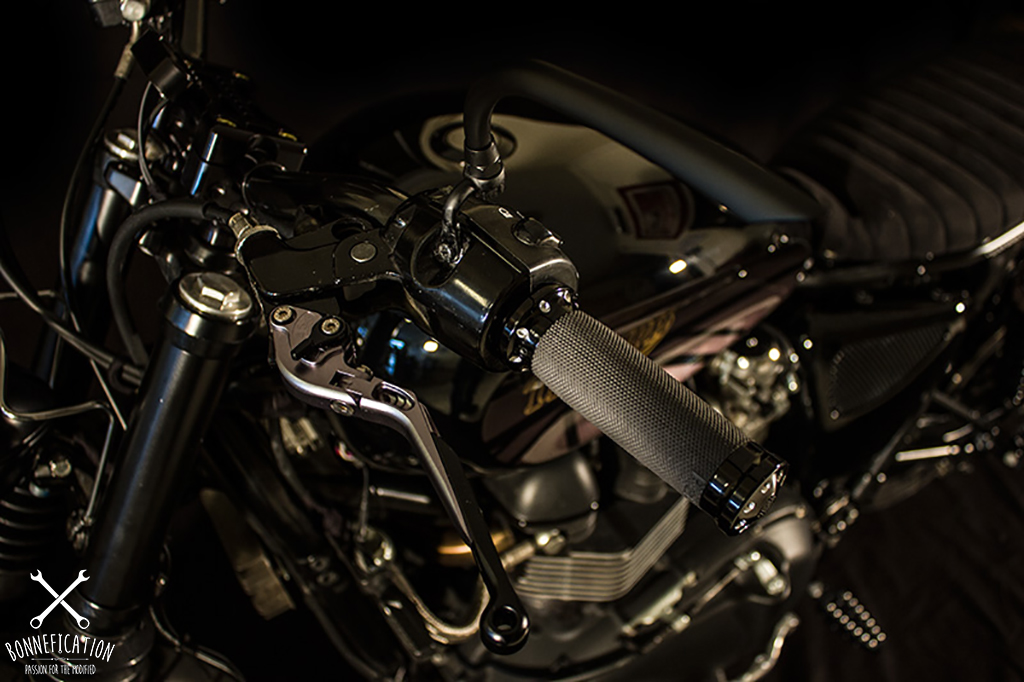 Sitting on the bike you will look down on black Biltwell handlebars which have been fitted with the stock  Bonneville switches, Roland Sand grips and aftermarket levers. The speedo is the Motogadget Motoscope Mini with the black billet casing. The suspension has had a much needed upgrade with the stock items being replaced by shocks from Progressive Suspension. 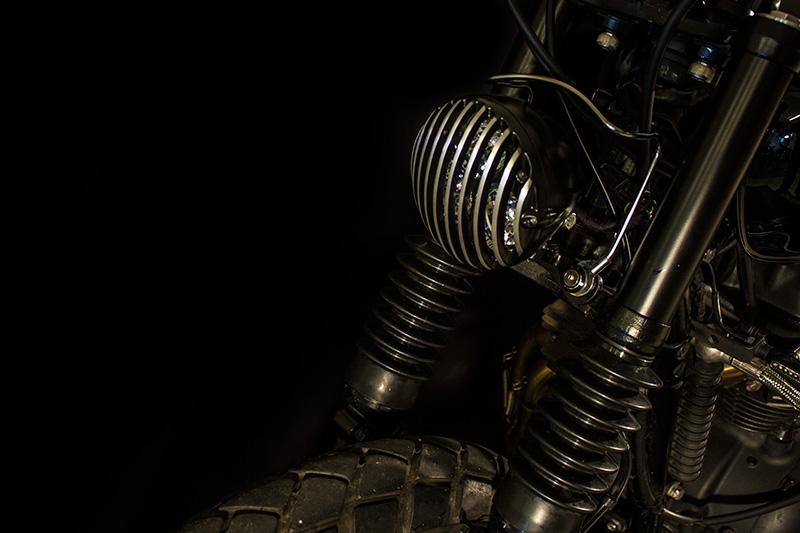 The OEM black coated wheel have been fitted with the Metzeler Tourances’ a dual sport tire which are a very popular upgrade for Triumph Scrambler owners wishing to ditch the factory fitted Trailwings. 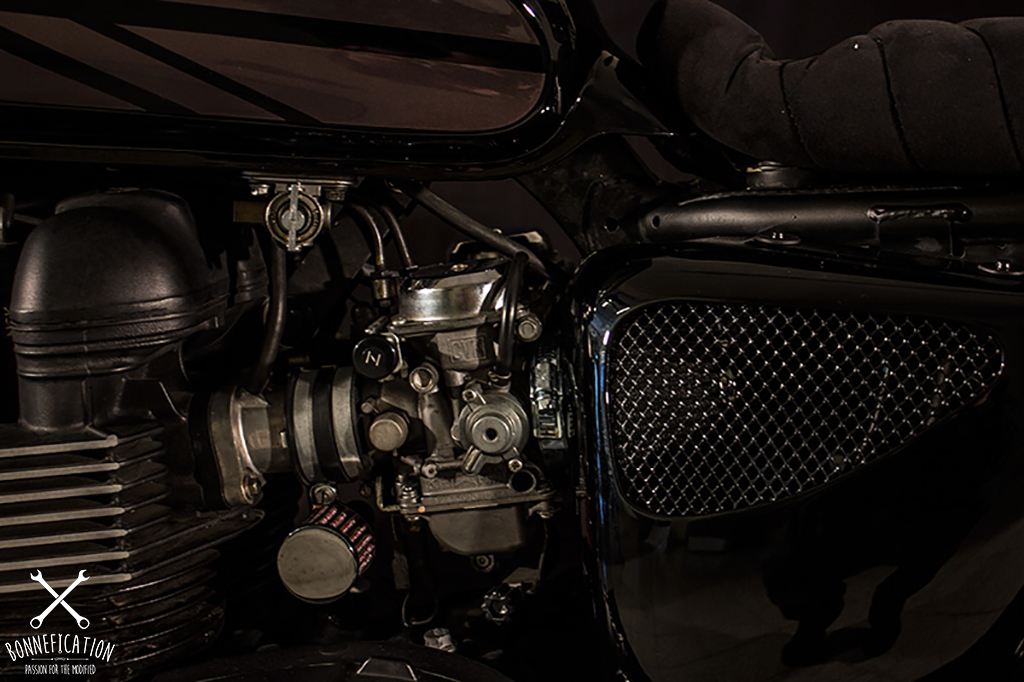 The exhaust is a modified Virex system which Leonardo has adapted to fit the Triumph Twin. The stock tank has also been reworked with Leonardo removing the scolloping on the sides, moving the filler cap and paining the tank in a super cool black  jack colour scheme. 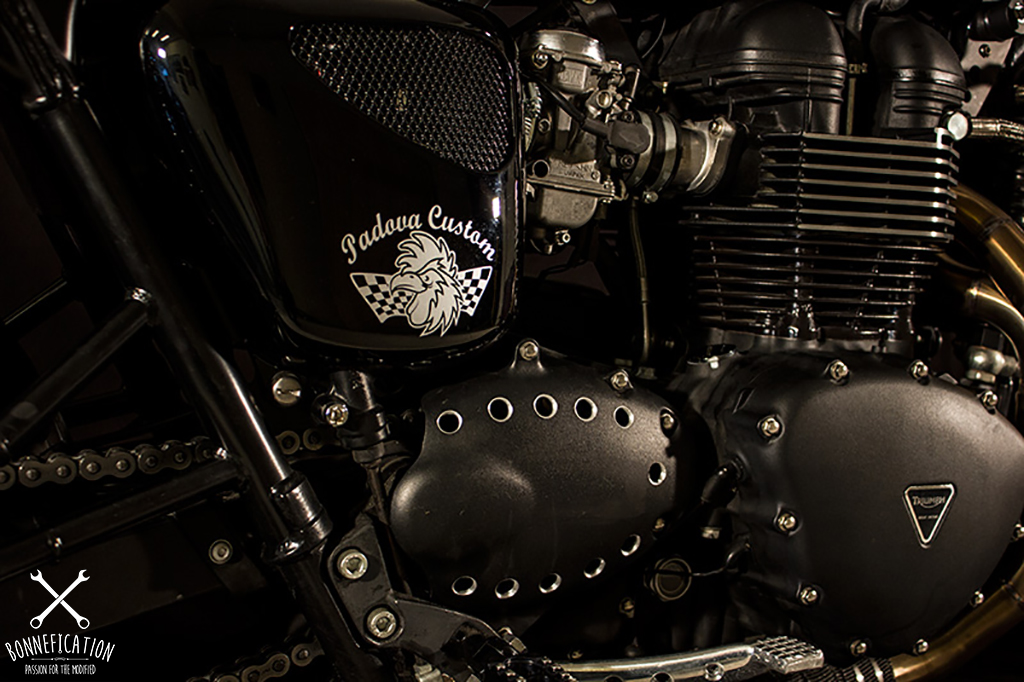 Other touches include; vented side covers;  drilled sprocket cover and a custom ignition relocation bracket.