North East Customs unlike their name may suggest to a Brit, are not based in the North East of England, the home of Cheryl Cole, I mean… Cheryl Fernandez-Versini, – but are in fact based in Padova in the north east of Italy, some 30 miles outside of Venice. 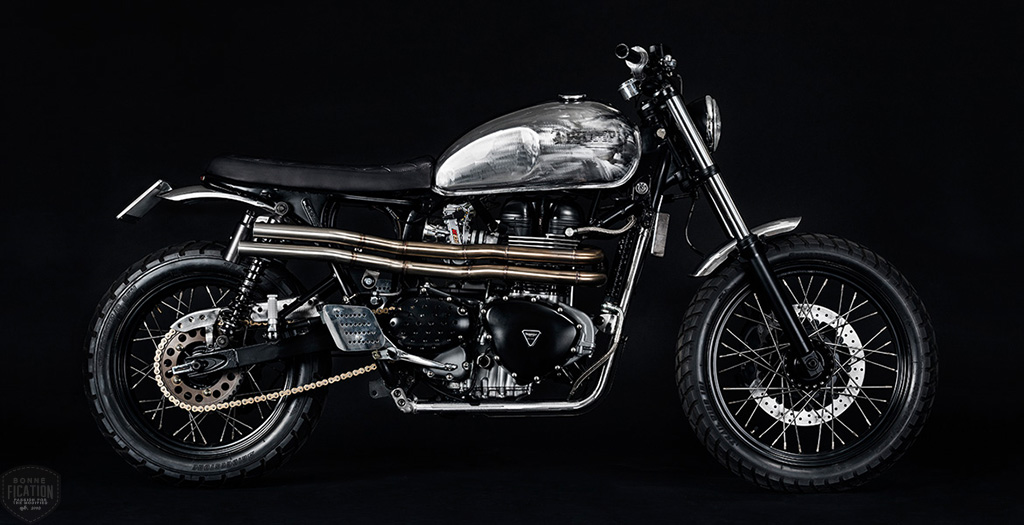 Founded by brothers Diego and Riki Coppiello in 2014, North East Customs is the banner under which the two siblings have united their skills and passion for motorcycles to great effect – having their work featured on BikeExif  as well as the Italian Ferro and LowRid magazine’s. 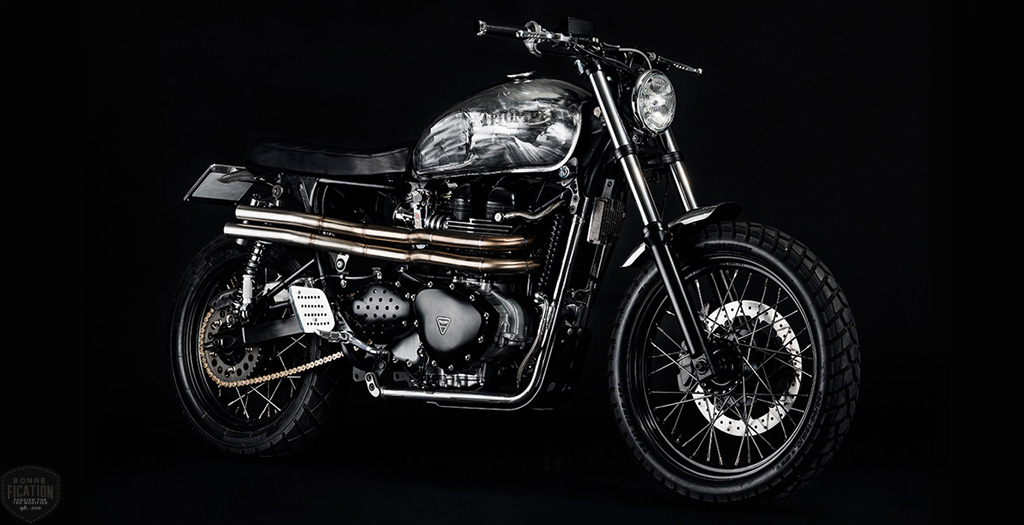 The brother’s latest build is based on the-pick-of-the-bunch, the Carb model Bonneville, which as you can see from the images has undergone a fair bit of modification. The look for this build is clearly ‘Raw’, with painted surfaces being kept to a minimum.

“We focused on two concepts: shape cleaning and materials” 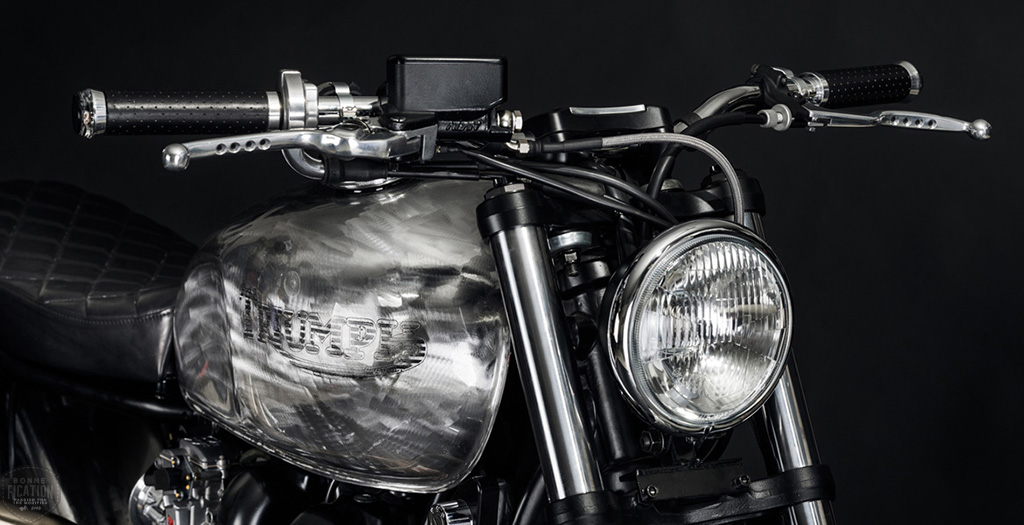 Bare metal, brushed effect petrol tanks have been popular for a while, normally the texturing is kept fairly subtle, achieved by simply wiping the tank over in a single direction with an abrasive. 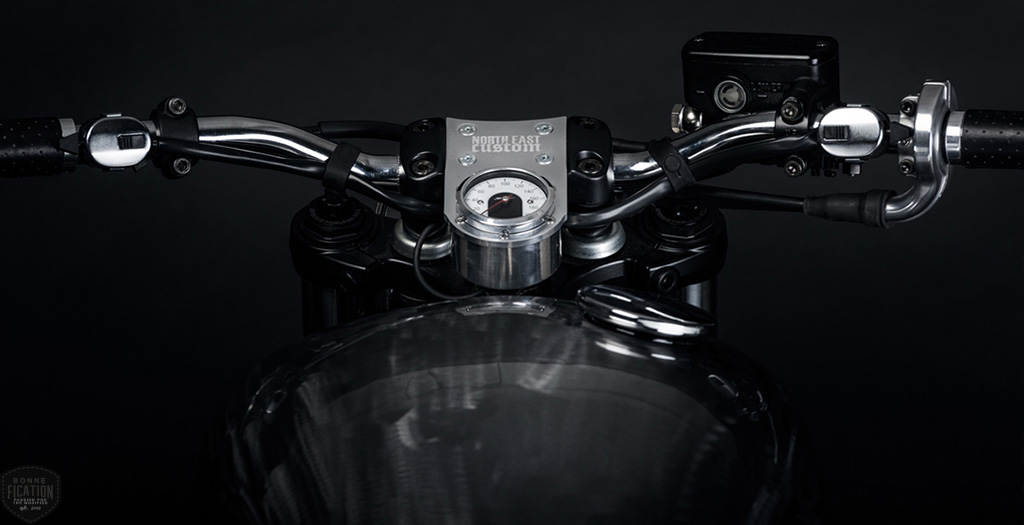 Subtle is clearly not what Diego and Riki wanted for this Bonneville, instead the sanding is raw and unfinished, yet not without detail, with the tank being hand engraved, tattoo like with a Triumph logo. The removal of the Triumph’s protective layer also extends to this Twins detachable engine cradles, which have also  been sanded down and clear coated. 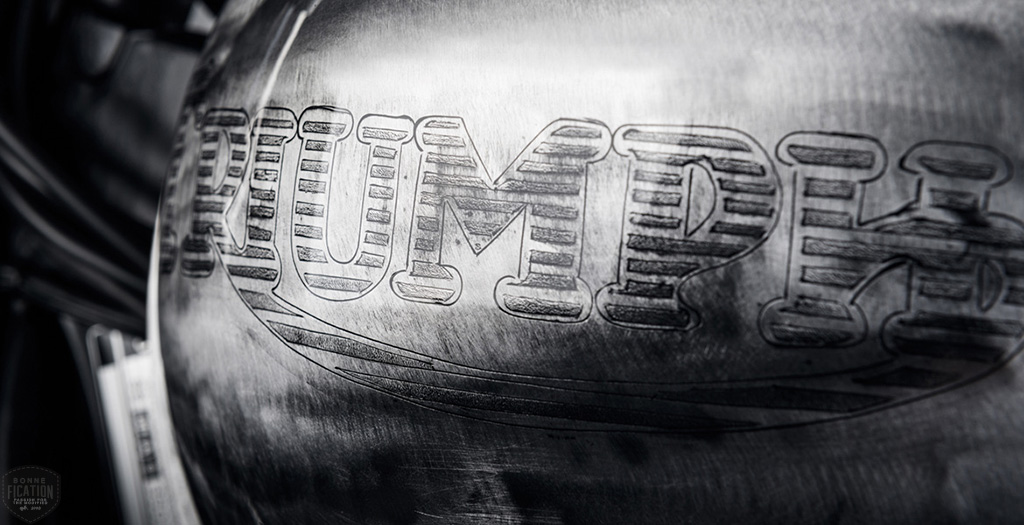 “…the bike has got little plastic. We decided to get rid of it in order to leave place to the metal, the inner soul of the bike’. 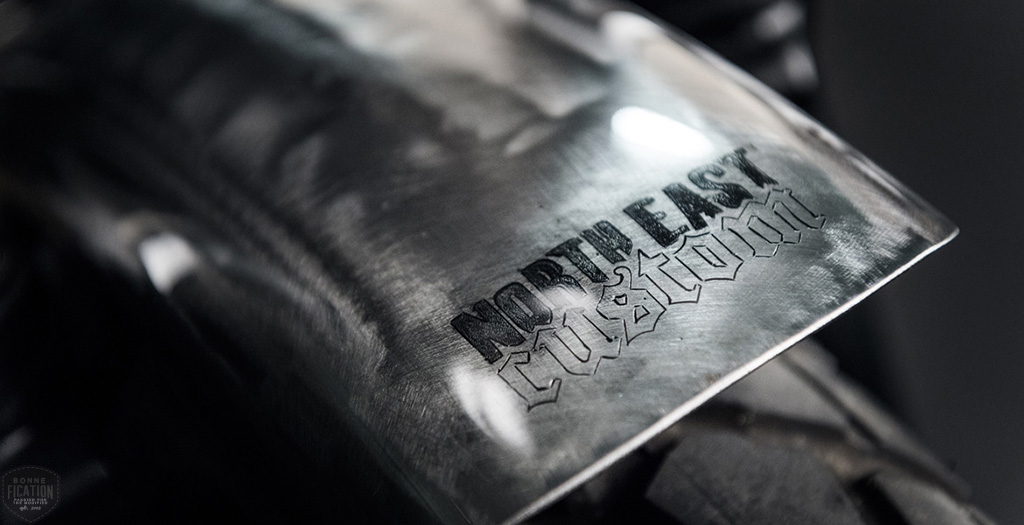 It will come as no surprise that this Bonneville has been chopped, looped and fitted with a bobbed mudguard, which incidentally matches the tank in both finish and that it sports an engraved logo, though for the mudguard it is that of North East Customs. 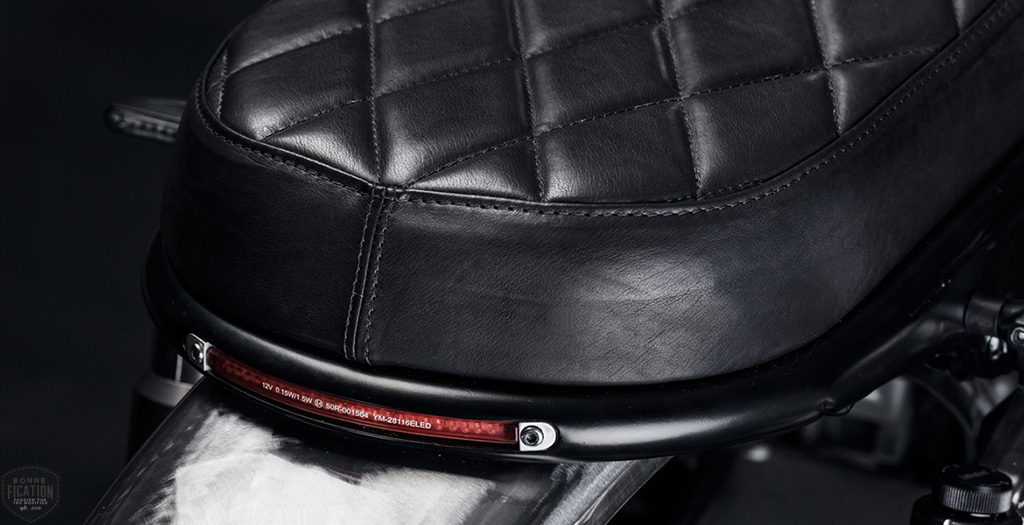 The stock air/battery box has been removed, with all the electrickery being relocated and rerouted to give the bike the much desired see-through frame – though on one side obscured by a high mounted stainless steel exhaust system, fabricated by the guys at North East Customs, through which you can see a set Keihin FCR 39mm flatbed carb’s, fitted with large raw alloy velocity stacks! 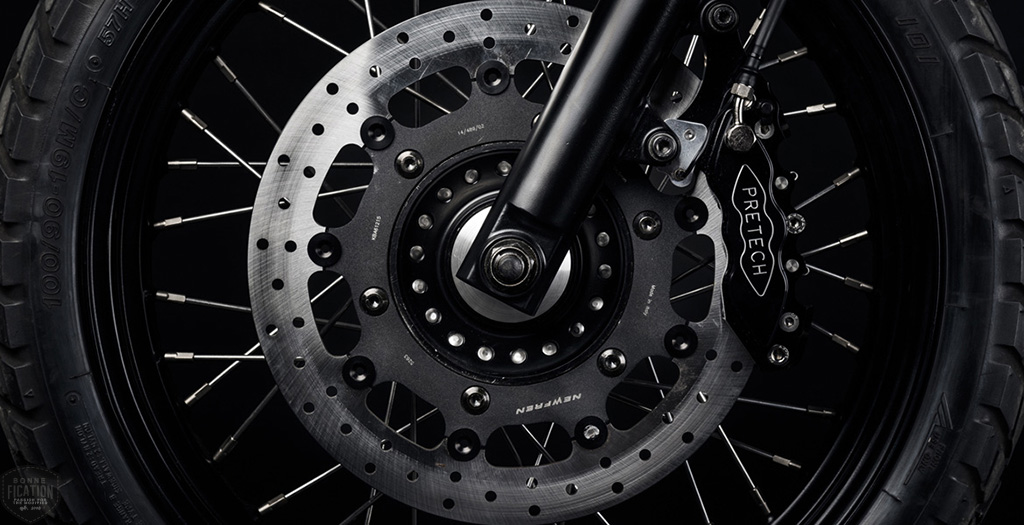 After the performance tweaks came the much needed handling improvements, which came in the form of a Pretech six pot Brake Caliper which utilises a reservoir from a Honda CBR. Suspension has had the obligatory upgrade with the bike being fitted with Bitubo gas shocks at the rear and Bitubo fork cartridge kit. 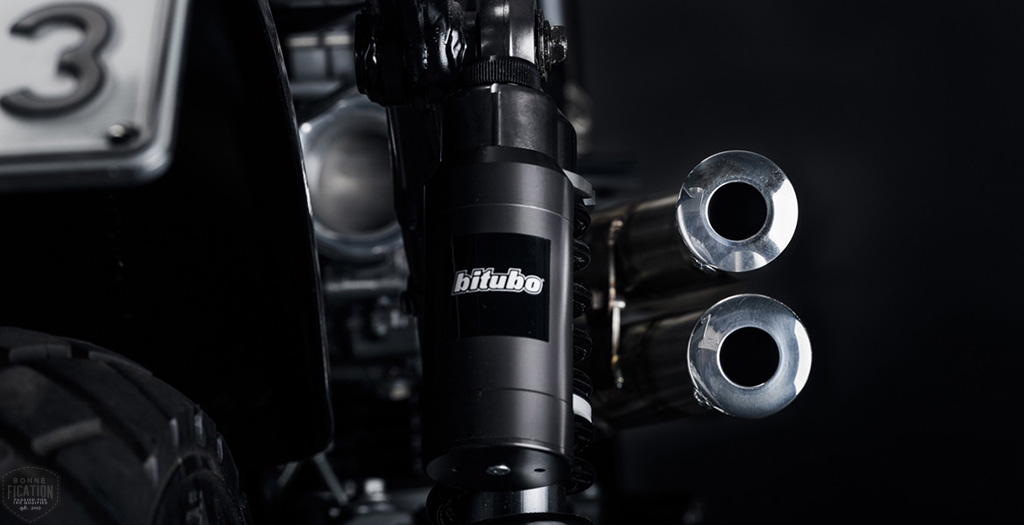 Sitting above that empty space, is a customs seat finished in black diamond stitched Kangeroo leather – leather which also extends to the grips which now adorn the Tracker bars – capped off with a set of bar-end turn signals. 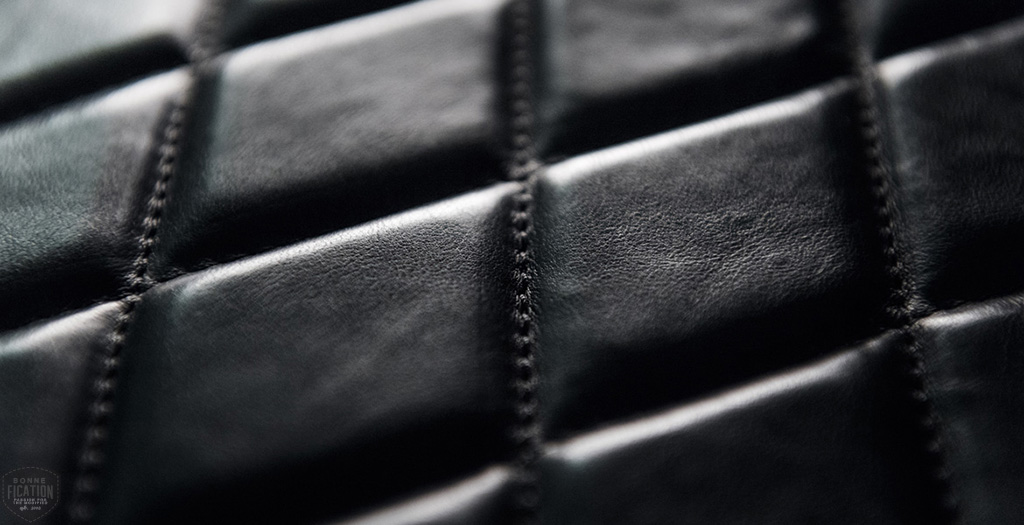 The bars also feature drilled levers, classic style switches and a Motogadget speedo, held in place by machined alloy bracket with engraved NEC logo, mounted to what I assume is a Scrambler model clamp.

“….even the handles are machined from solid aluminium,….”

A set of black wheels, laced to black hubs using stainless steel spokes and shod with Bridgestone Trail wing dual sport tires give the finished bike the popular off-road vibe that is very popular in the city right now 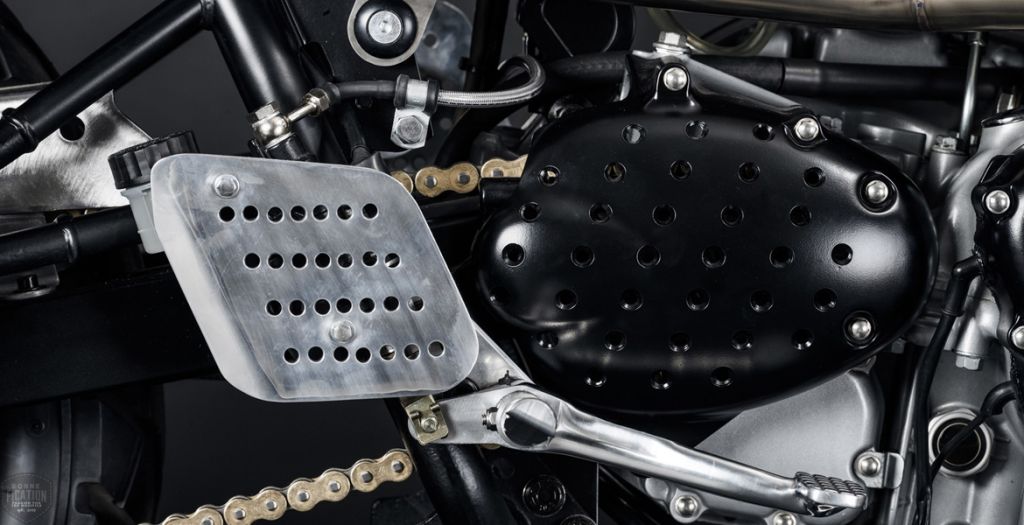