Richard Pollock of Mule Motorcycles is undoubtedly the godfather of the Hinckley Triumph Tracker, and perhaps one of the best custom Hinckley Triumph Twin builders to of been featured on Bonnefication. Some builders opt for gimmicks to get their builds noticed, machines which are all but useless once the photoshoot is over and the editorial is written. Customs which are better suited to static displays and Pinterest than the road. Richards build’s on the other hand are machines built to be ridden, modified to improve not only their appearance but also their handling. 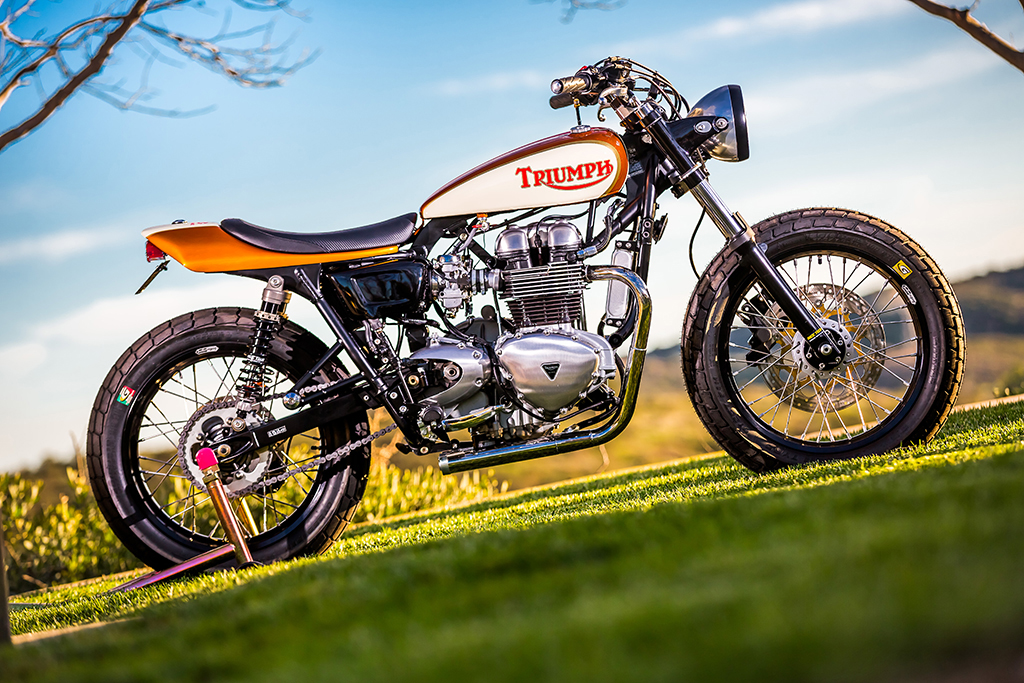 Triumph are sure to announce their own Flat Track inspired ‘Street Tacker” in the near future, a 900cc single seater, which will slot in nicely alongside the 900cc Street Scrambler, Street Twin and Street Cup. Though when they do, will it be as good as a Mule? – only time will tell. 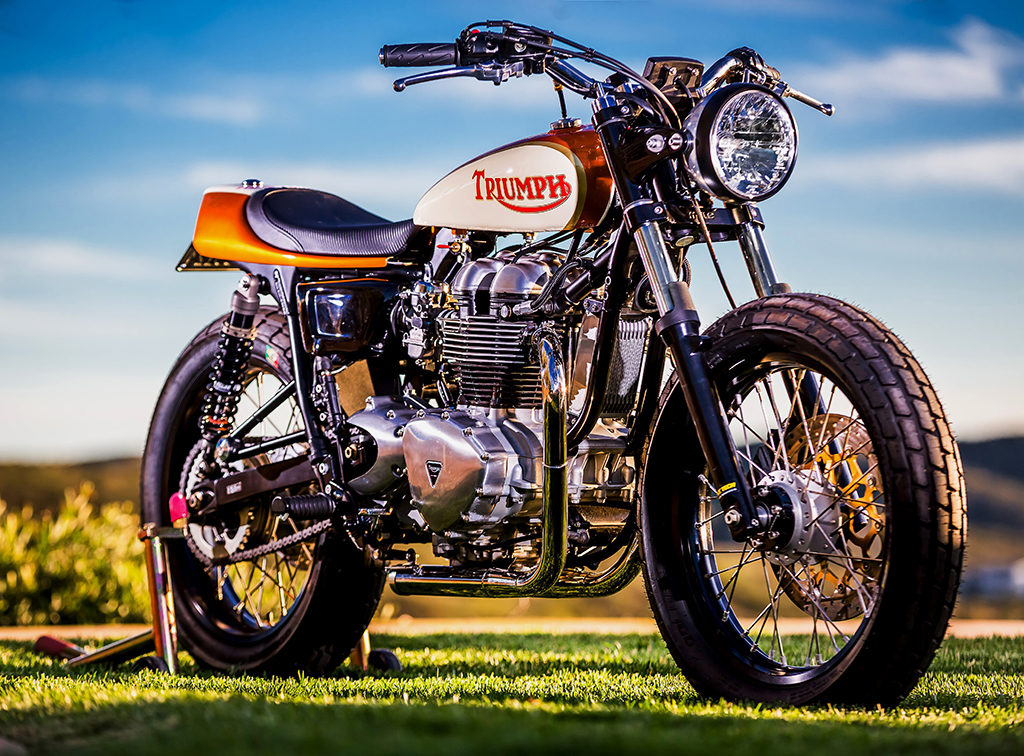 Richards latest Tracker is based on a 2007 Thruxton, sourced from a friend who had purchased the bike with the intention of it being used for another build, but instead purchased a finished machine leaving the Thruxton surplus to requirements. A key factor with a Mule Tracker is that most of the parts are pre-fabricated and off the shelf, with much of the work having gone into their design and fabrication years before. 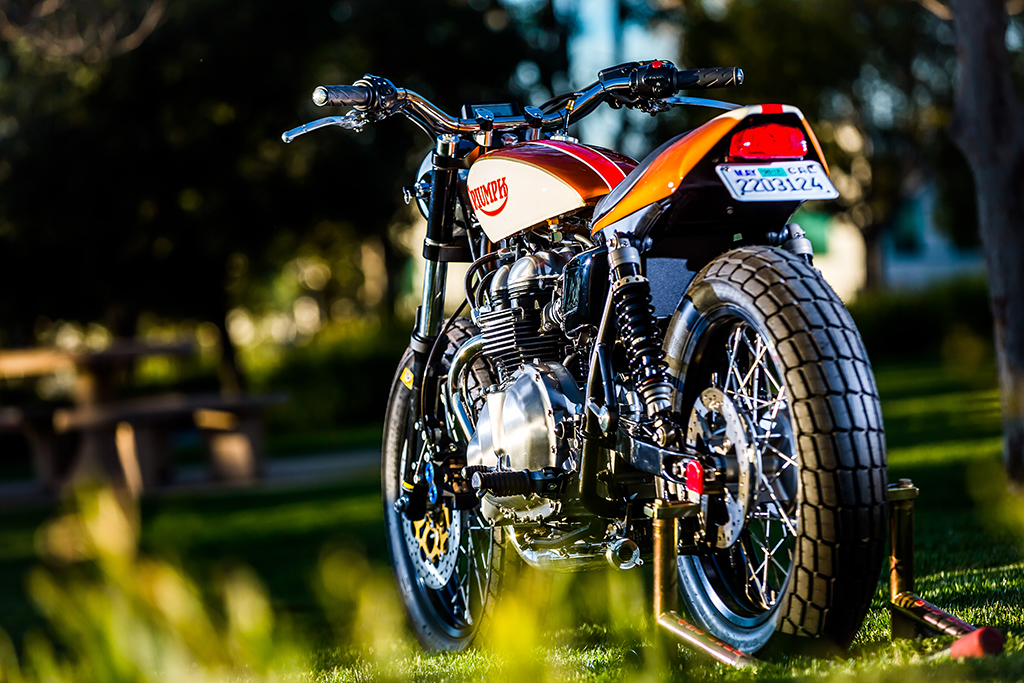 The frame modification and the fitting of the Tracker seat cowl alone is a work of genius –  the kit which will cost you €1250 allows the swopping between the single Tracker seat and the original dual seat set up. I doubt a factory Street Tracker will do that. 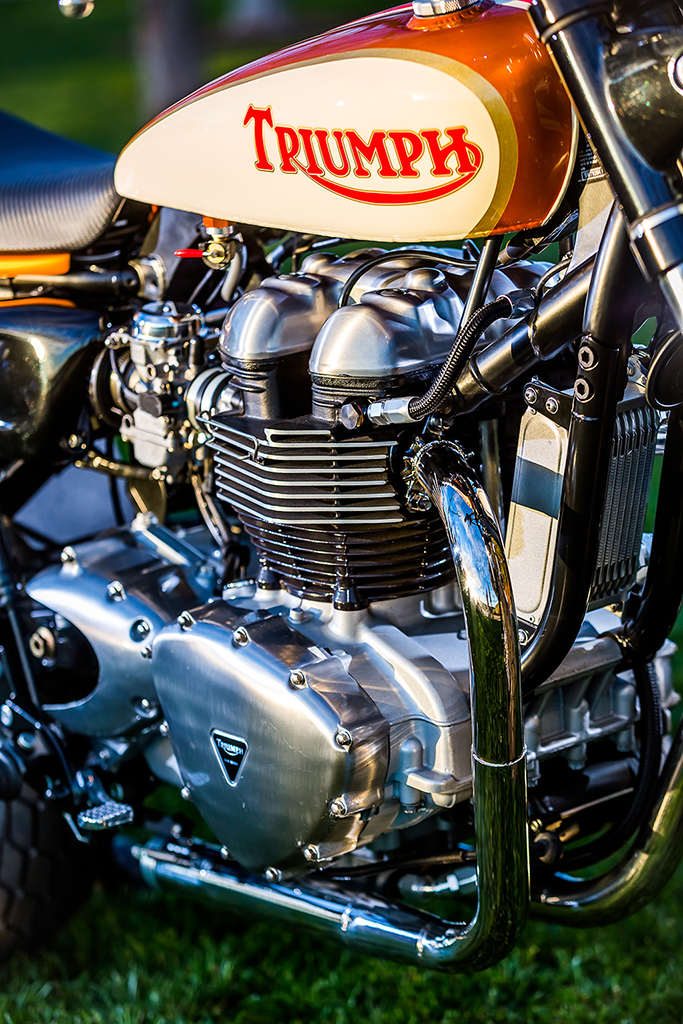 The frame modifications continue with the fitting of the Mule oil cooler system, utilising an Earl’s oil cooler, attached to the bike via short frame cradles, this dispenses with the stock items as well as the weighty side stand, swopped for a lighter item from the Mule catalogue.  The removal of the engine cradles also allows the custom Stainless TT style pipes with 12” long internal baffle to tuck in ‘uber tight’ under the 865cc naturally aspirated engine. 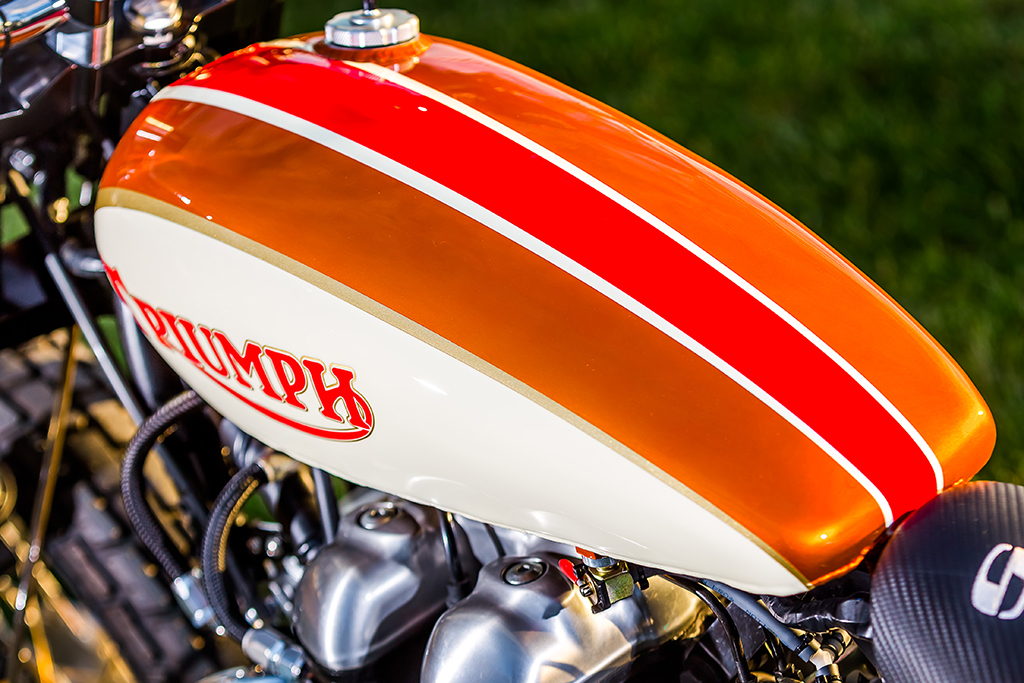 What sets the Mule Trackers apart is Richards use of the sleeker and and narrower Trackmaster style aluminium fuel Tank.  An iconic design which allowed the rider to hug the bike at speed, a design which instantly transforms a road going Triumph Twin into something truly special. 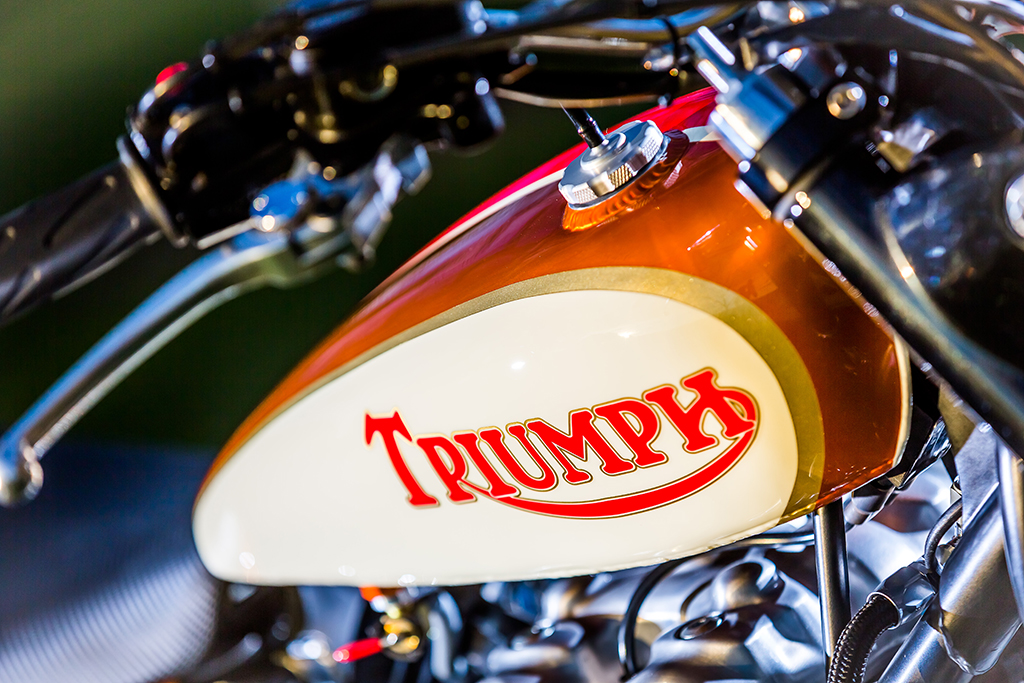 The client for this build requested the Trackmaster tank was to be finished in the gold from a 1963 Schwinn Sting Ray, one seriously pimped bicycles thats for sure. Richard tells us that this was the fourth attempt at this gold having done three other bikes with the same material. “They all came out beautifully applied, but just a bit too dark, almost an orange/bronze…. but in the end, this was the best yet”. 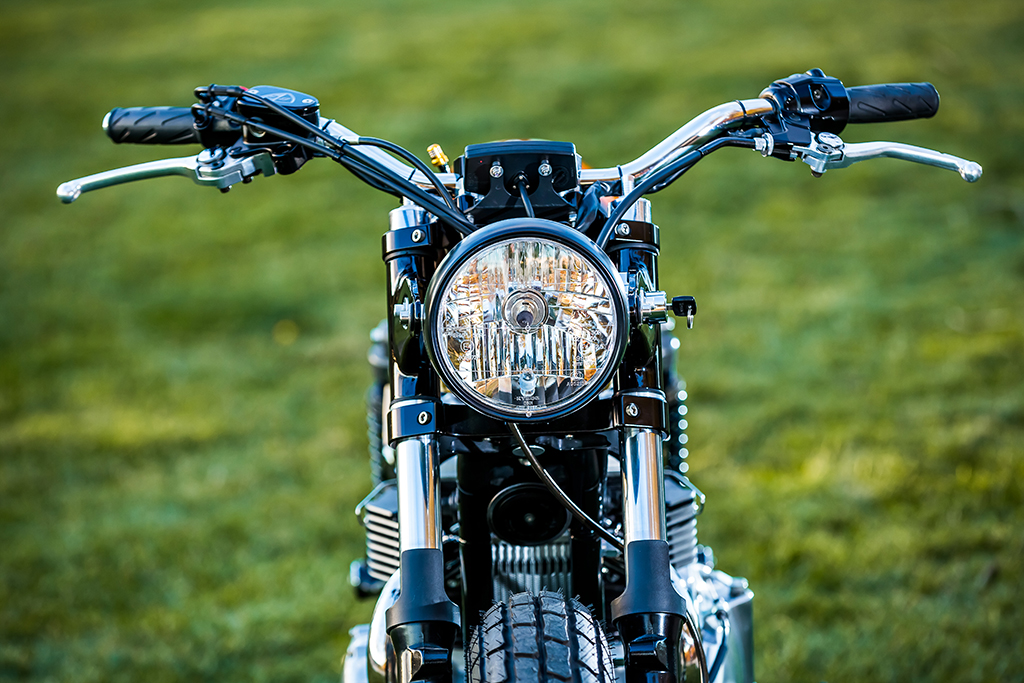 Richard traditionally fits Yamaha R-6 forks, but this Tracker was on a tight budget. Instead the original 41mm Thruxton units were kept and fitted to the Triumph using the Mule triple camps. Richard describes the stock forks as ‘appearing to be the ‘lightest forks available while not being very high tech… working fine on the street, though improving greatly after being fitted with Racetech valve cartridge emulators, paired with a set of Racetech shocks at the back.

Wheels and tires can make a bike, it couldn’t be truer when it comes to a Tracker and Richard knows it, fitting black 19” Sun rims, wrapped in Goldentyre brand DT tires and laced to the stock Triumph hub at the rear, with the front rim being mated to a 1975 XS650 Yamaha hub, fitted with a Brembo rotor, with a second hand Yamaha R-6 front calliper providing the stopping power. 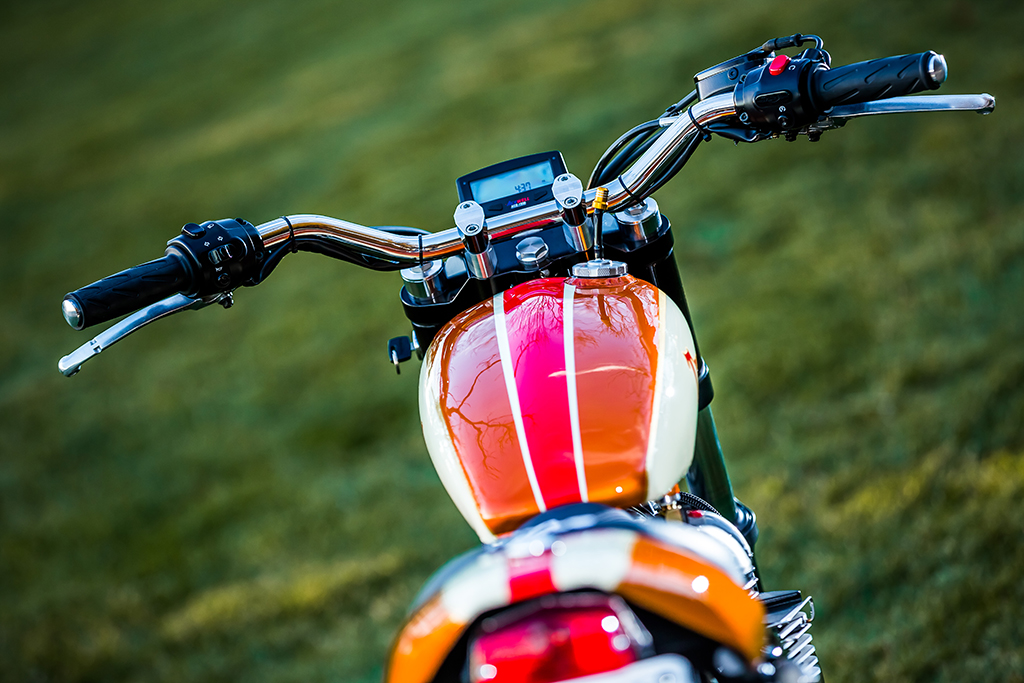 Up top the stock speedo has been replaced with a more compact, though not entirely retro electronic speedo from Acewell, with the original handlebars being changed for appropriately styled and back swept  1” Tracker bars, fitted with OEM Triumph switches and levers. The Thruxton’s master cylinder has been retained and now feeds the upgraded Yamaha R-6 calliper via a Crown Performance brake line, running down behind a LSL headlight unit, fitted to the Tracker via a modified stock Bonneville head light brackets. 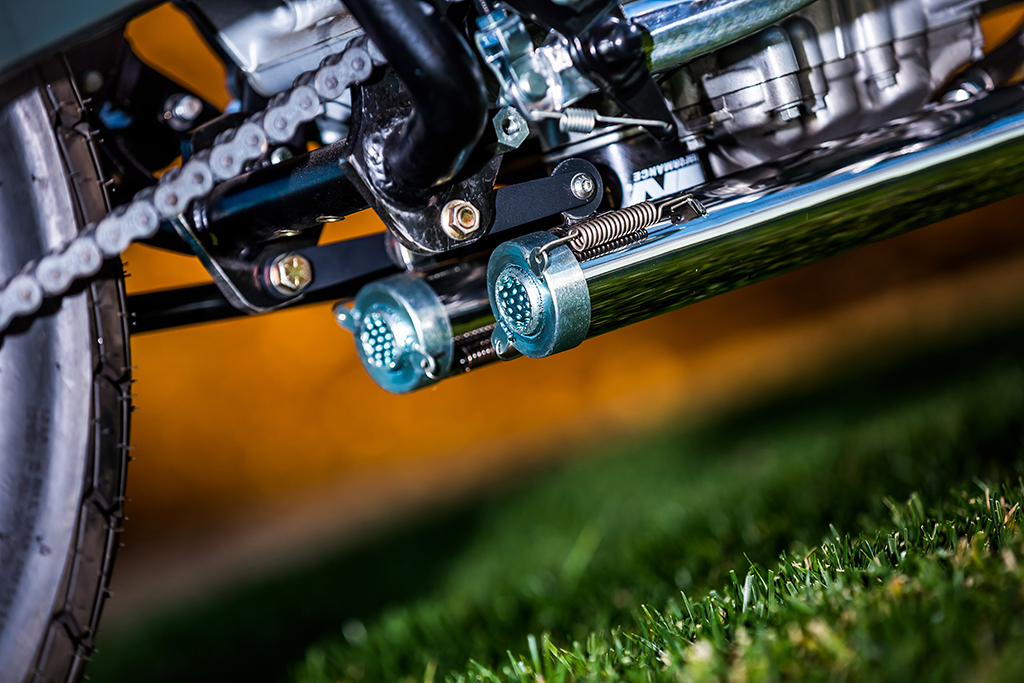 The build took five months and while the budget was bit tighter than most of Richards builds, every effort was put into finding the right components to do the job and hit a finite price limit…. Great work!