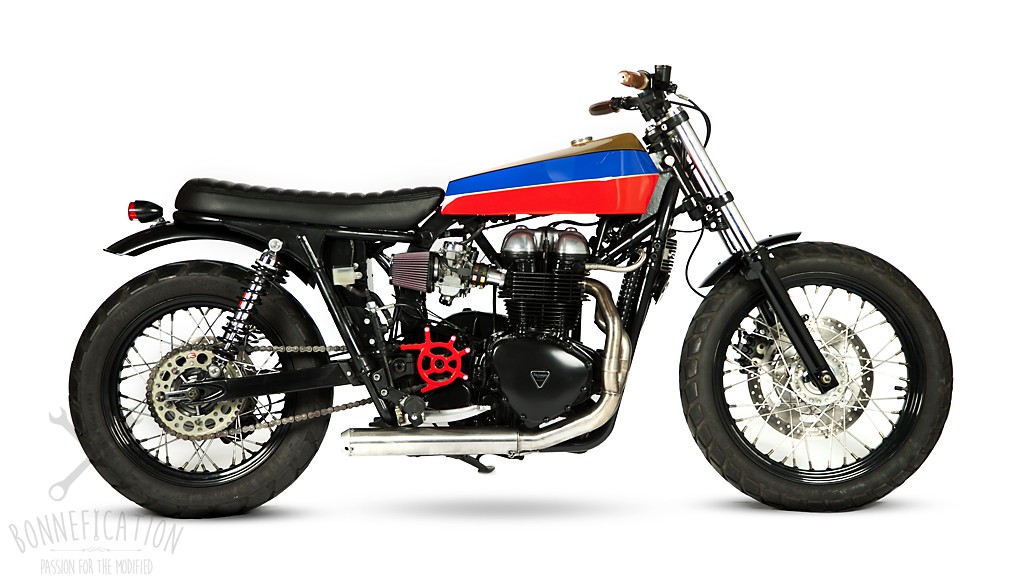 Yet another great looking custom Triumph from Luis Correia of Maria Motorcycles Lisbon. But this is not the first time this particular bike has had the Maria custom treatment, but it is the first time on Bonnefication.com. The client, who is also close friend to the guys at Maria wanted to go even more minimalist. This 2006 Bonneville had already had all the right bits taken off and a scattering of custom and aftermarket accessories added, but now the owner wanted to go a even further, so some of those bits were coming off. 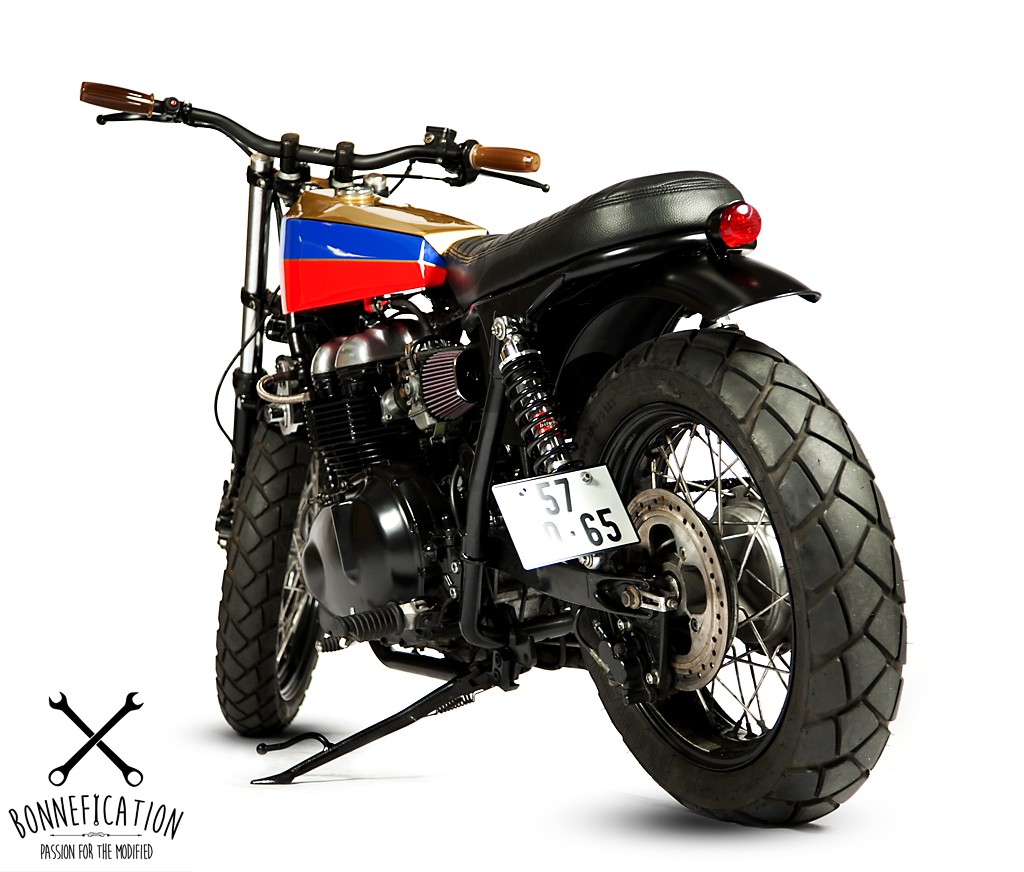 On this occasion it was items including the speedo and Indicators that were destined for the bin, the front light has also been scaled down considerably with the change to a LED strip light, which has been fitted under the lower yoke, close to where the rectifier once sat. The rectifier has been moved to the frame using a undisclosed make reloation bracket. Though items similar to this can be purchased from Motone Cutoms in Europe or British Cutoms in the the U.S. 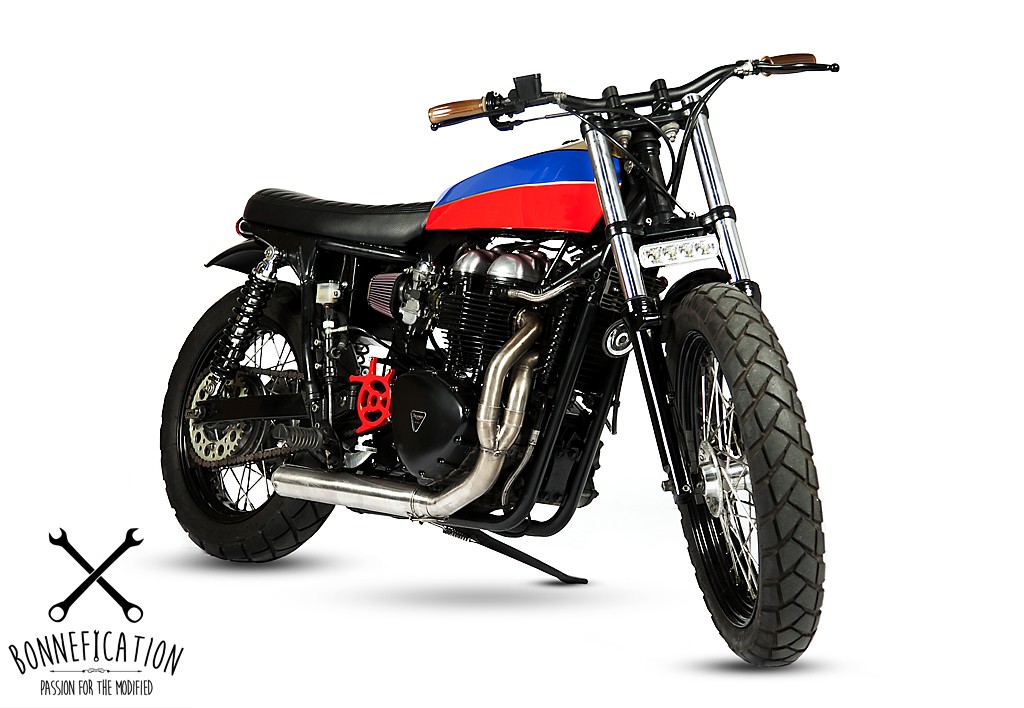 The frame had previously been shortened with a loop added.  The heavy stock rear mudguard, and the laughable rear light assembly had been replaced with an alloy mudguard, which was been painted black and topped off with a small black tail light. The number plate has been relocated to to a bracket secured to the rear shock. This keeps the back end of the bike nice and clean looking.

If you are ever going to modify your Triumph Twin, cutting and adding a frame loop is a good place to start… a little scary for the novice, but the reward is you get a much better looking back end. Having loop made is easy. Just measure the centre point of the frame where you cut and have some 1″, 2mm thinwall tubing, bent to that radius. Fitting obvioulsy need doing by a skilled welder. A generic alloy mudguard can be sorrced via eBay and cut to fit.

Another item which had been replaced in the first build was the petrol tank, this had been changed for a glassfibre item, which again was ditched in favour custom handmade steel tank, which then recived a very fetching red/blue/gold paint scheme. Not unusual to change parts more than ones, we have all done it.

With a modified frame and custom tank, comes a modified/custom seat, which again was from the previous build. As you can see from the photos this seat no longer extends over the frame rails on either side of the bike as it would on the stock bike, another nice modification which help make the bike appear a little lighter. The side covers and air-box, have been removed, with the battery tray being replaced by a much lighter custom alloy item. This will help the bike breath a little easier, but does open up the electric to the damp. With the removal of the air-box the carbs needed protecting from sucking in to much crap, so the ever popular K&N conical air-filters have been fitted.

The super sexy Zard 2-1 Low Level Exhaust had been fitted previouly and retained on the update, as they should be at these babies look good and sound bloody amazing. I have a set of these sitting on the office floor ready to be fitted to the next Bonnefication project. But be warned if you are after street legal pipes, these are not for you. 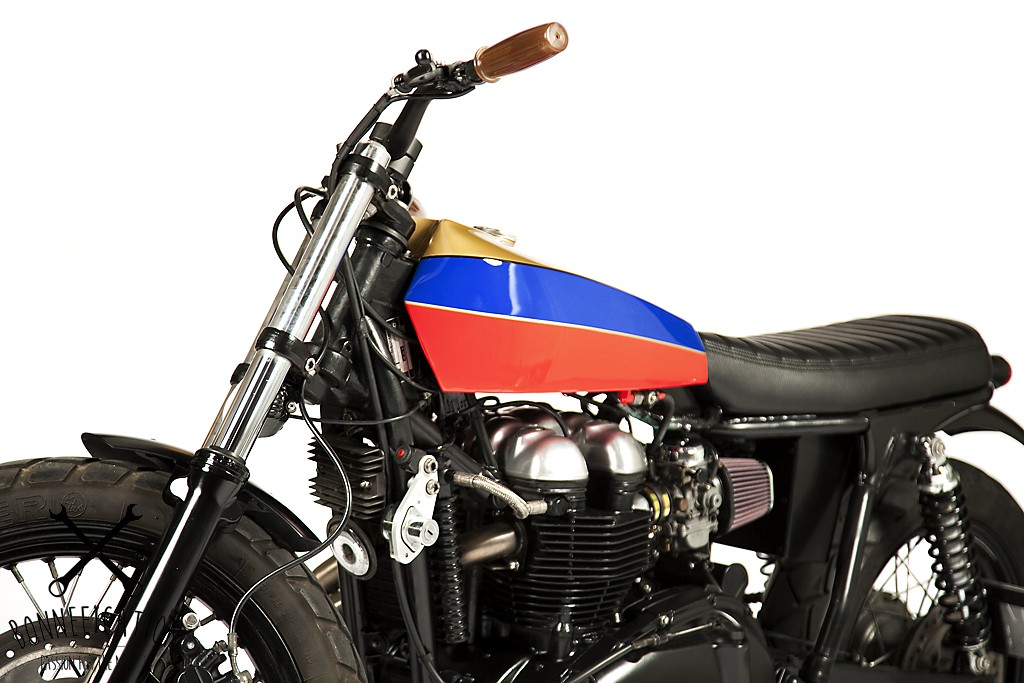 To improve the Triumph handling, the stock the suspension received a much needed upgraded, with the front spring being being replaced with shorter/stiffer items. The rear shocks had been upgraded previously with Bitubo’s. The stock wheels have been painted black and fitted with with our old friend the Metzeler Tourances Dual Sports, which is a nice tyre which I had fitted to my scrambler before I opted to change them for the much sexier TK80’s. The massive list of item to go On the Bonneville on both builds included a bright red sprocket cover (don’t know brand) Posh gum grip and ignition relocation bracket.

And the result of all this fine work… ‘The bike became very light and agile, since we had removed many of the original parts. It´s very lowered compared with the original Bonneville. The performance increased a lot with the new pipe and air filters, and with the new carb retune. The design became as supposed, different, questionable and risky! To drive, it´s one of the funniest Bonnies we made”