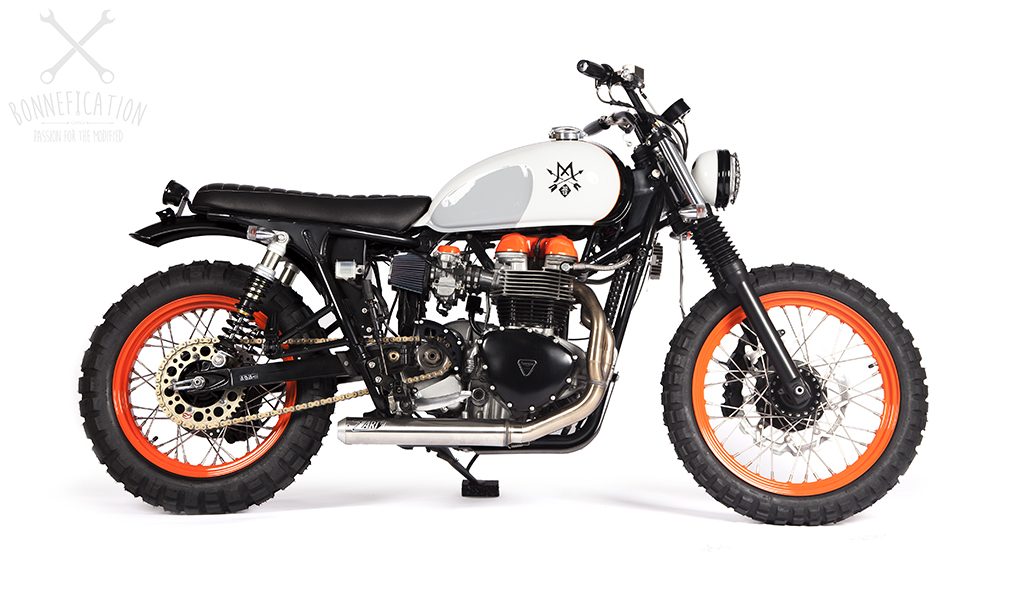 Lisbon based Maria Riding Company have been building some very nice Triumph Twins over the last few years and here is their latest, which is based on an 2004 Triumph Bonneville. Maria describe themselves as having the ‘The Essence of Fun‘ and riding this nicely put together Triumph Twin, which has been named ‘Julijana’,  ‘fun’ is exactly what you would have, especially if you took it up the odd dusty dirt track. 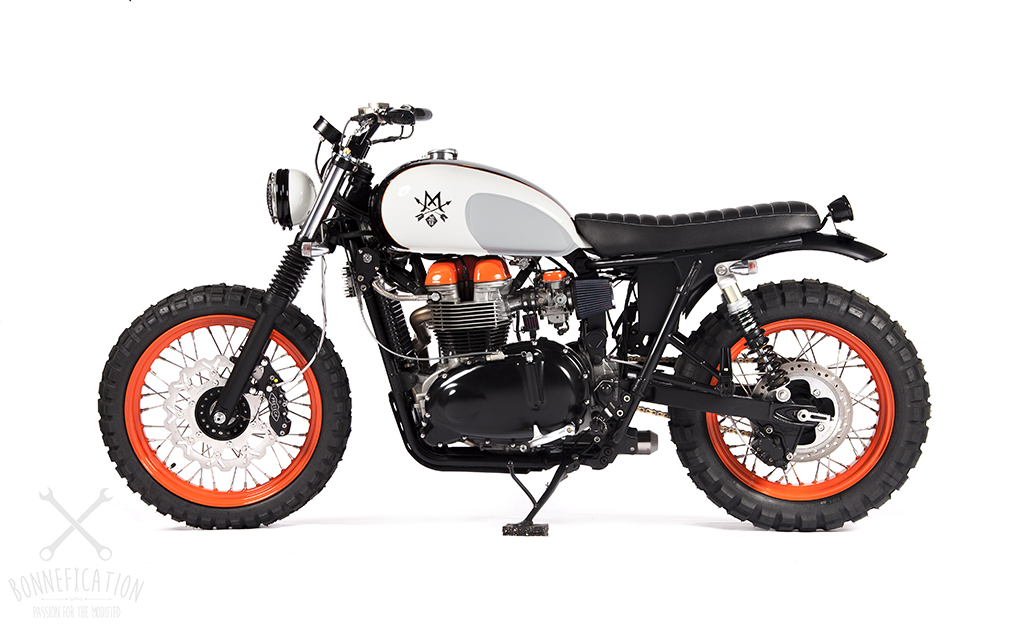 The Julijana was built for a client, who had seen one of Maria previous builds named the Juliette and wanted something similar, but with more rugged off-road looks. Although the Juliette is the inspiration for this build, the guys at Maria wanted to take  a different approaches, since they didn’t want to build two bikes the same. 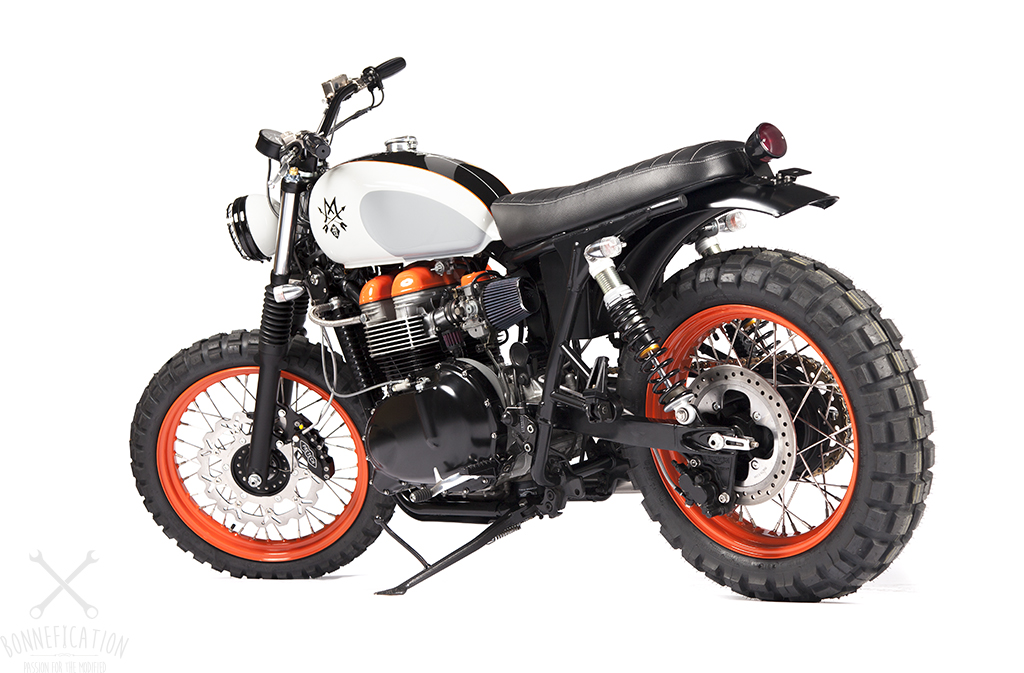 Luis Correia founder of Maria Riding Company continues…
Our major objective was to built a extreme bonnie, with great equipment and with a out of the box approach for a bonnie. Something more inspired in the races, or the endure and motocross bikes. It was a mixed feeling because, for one side we had loose a little from the classic looks but by the other side we did something very different from the usual. 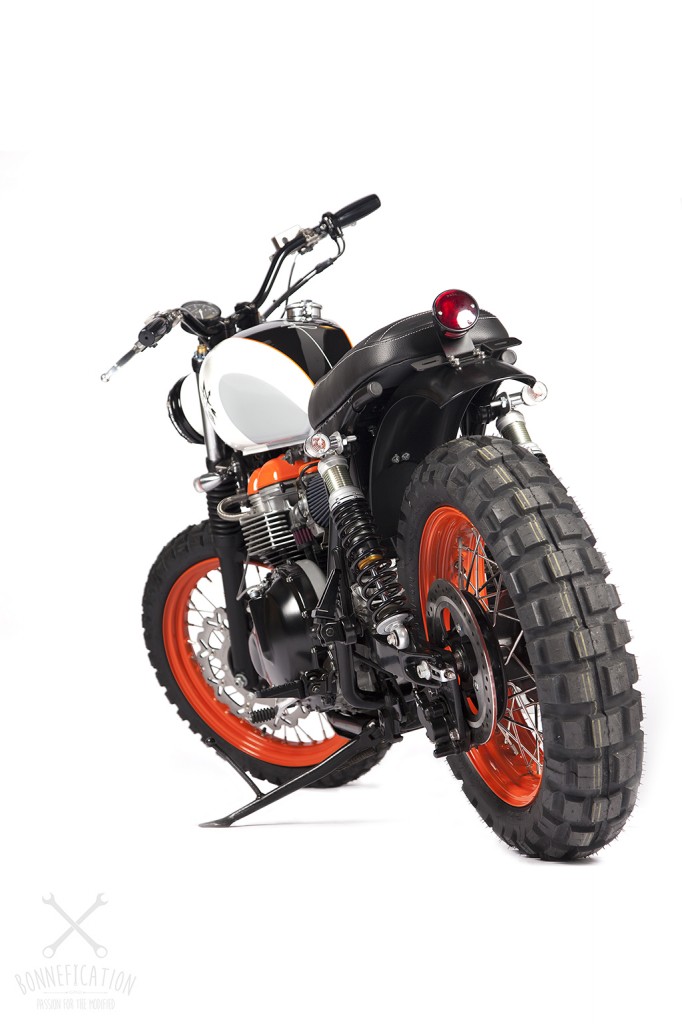 The bike was from 2004, but it was a “like new bike”. Mechanically it was very nice, apart from the normal oxidation and some rusty parts. we unmount almost everything in this bike. First we recovered all elements that needed our attention, we shortened the rear, like we did in almost every bike, and next we installed a really nice top of range equipment. 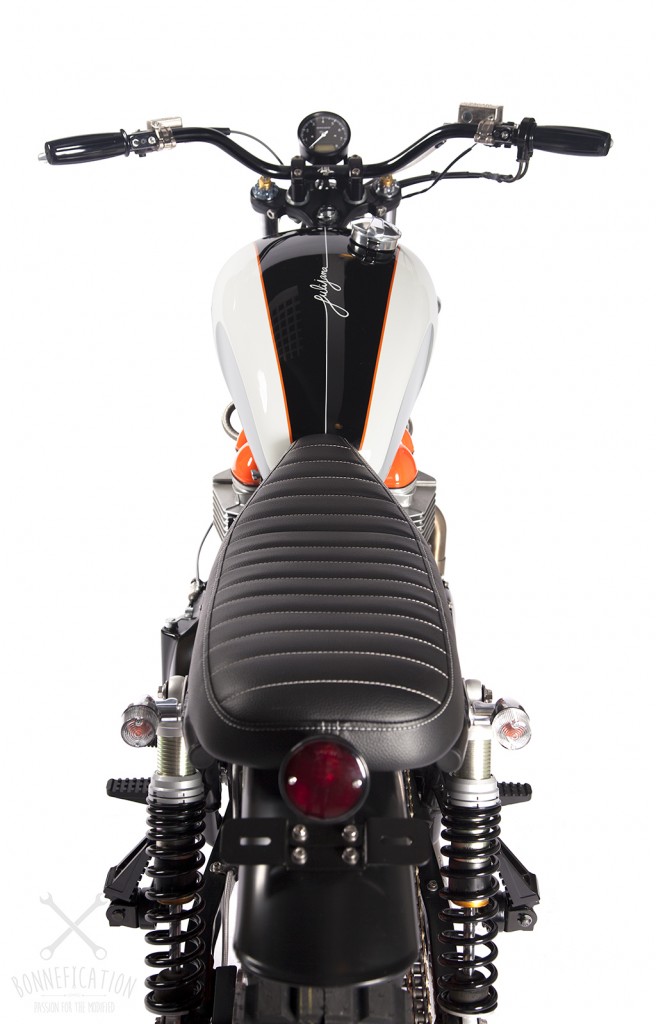 On the front, we install a new brake set, with Braking front disc and new brake caliper from Pretech with 6 pistons.
The front suspension had an upgrade from Ohlins. New handlebar, handlebar supports, brake and clutch levers from Magura, and all switches incorporated on the handlebar for a more simple look. To finished the front look we install a beautiful Motogadget to give all the info needed to the driver. The front light is a Harley sportster headlight, painted to match the color scheme with a protector grid. 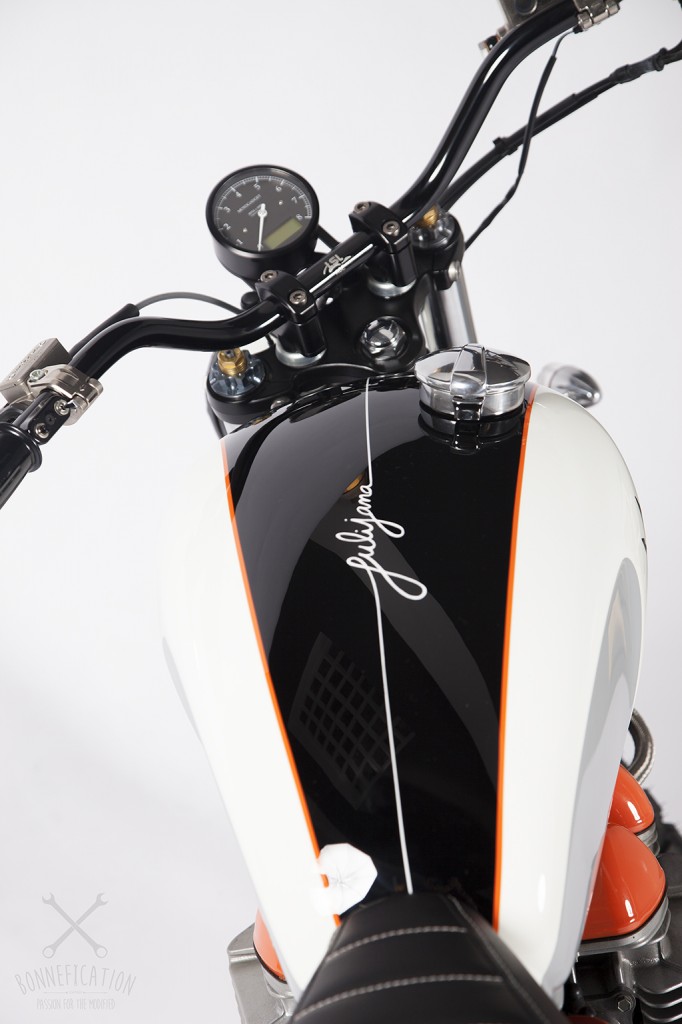 About the exhaust, our option was to have a small one. We choose a Zard, different from the upper exhausts usually used on Scramblers. The sound is massive! We retune the carbs, installed new air admission, with air filters from K&N, new custom battery box, lithium battery, with all the original cables maintained, hided as good as possible. 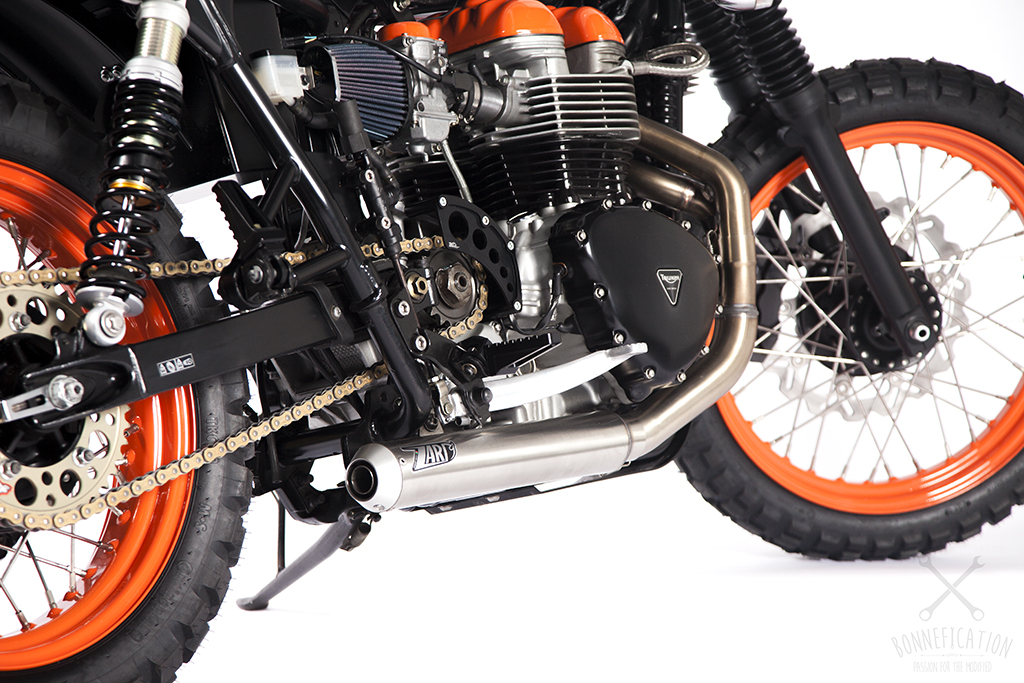 On the back we added new Ohlins suspensions, new transmission set from Renthal, aluminium rear fender, with a posh backlight. More items installed were the black footpegs from Joker, aluminium turnlights, aluminium gas tank cover, and the custom black seat. 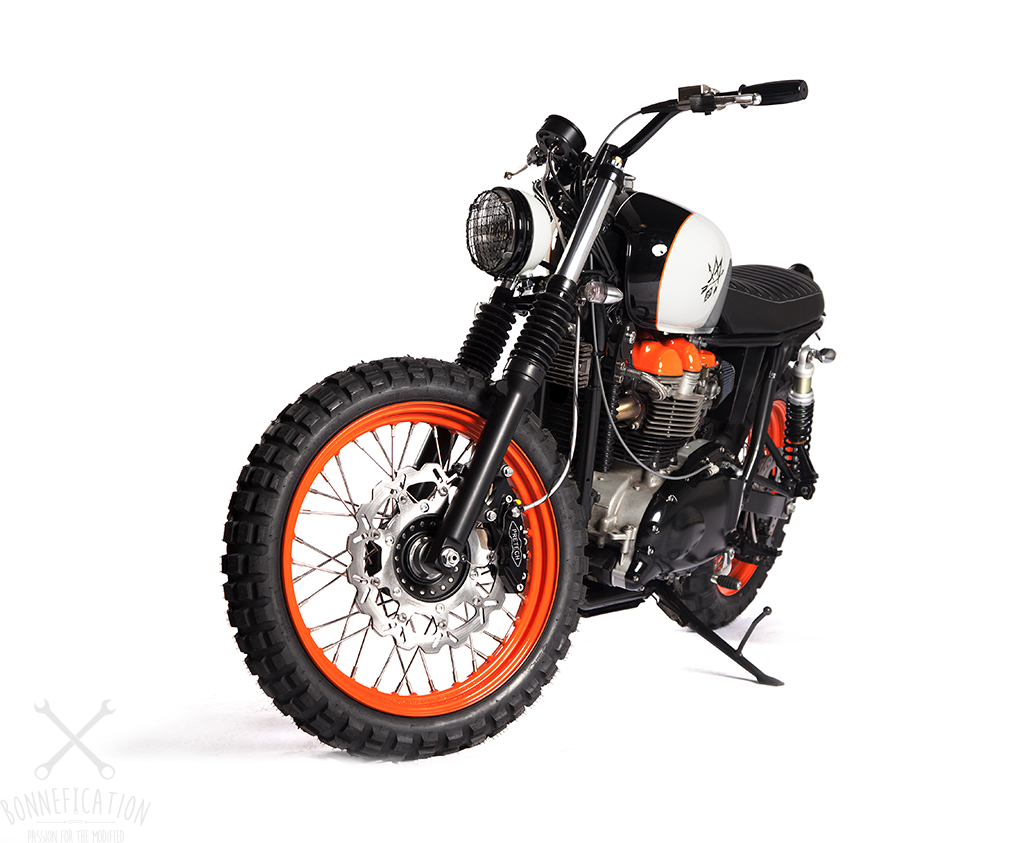 The painting was very intensive job of this project. From the engine covers, to the valve and carbs covers, rims, hubs, headlights, tank, was all chosed from the beginning to have this unique, agressive and radical look. We loved the final looks of the tank with Julijana name written on the top of the tank. The tires are Continental TKC 80. 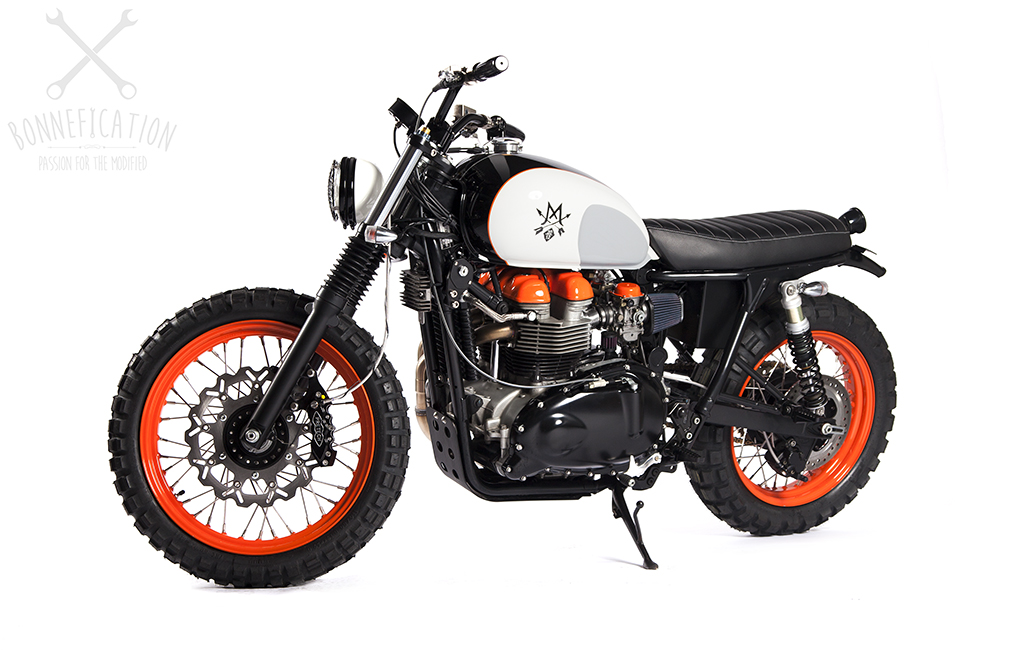 In the final, we thought that we made one of our best handling Bonnies ever. The bike is powerful and rides great, thanks to the nice suspensions and brakes. It´s much more lighter than the original, and it´s roars like a beast! Although any doubts on the visuals on the beginning the think that the looks became outstanding on the overall! We became very happy with the final result!