I’ve been a fan of the custom Triumph Twins which Jose and Tito of Cadiz based Macco Motors have been building since featuring their ‘Dusty Pearl’  build some three years ago. And since meeting the Macco duo at last years Bike Shed Show at London’s Tobacco Docks I now count Jose and Tito as friends. 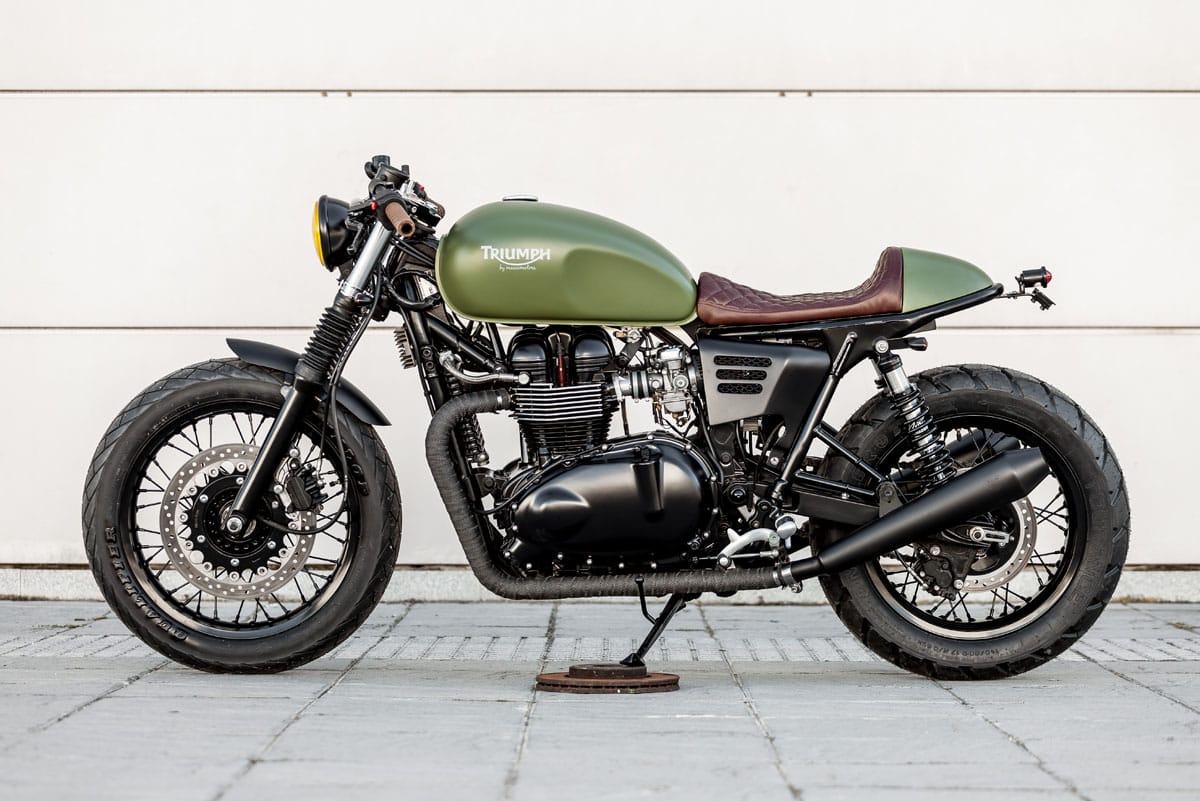 It was good to catch up and have a chat with the guys again this year, which the Macco duo attended while their wives enjoyed what the British capital had to offer. 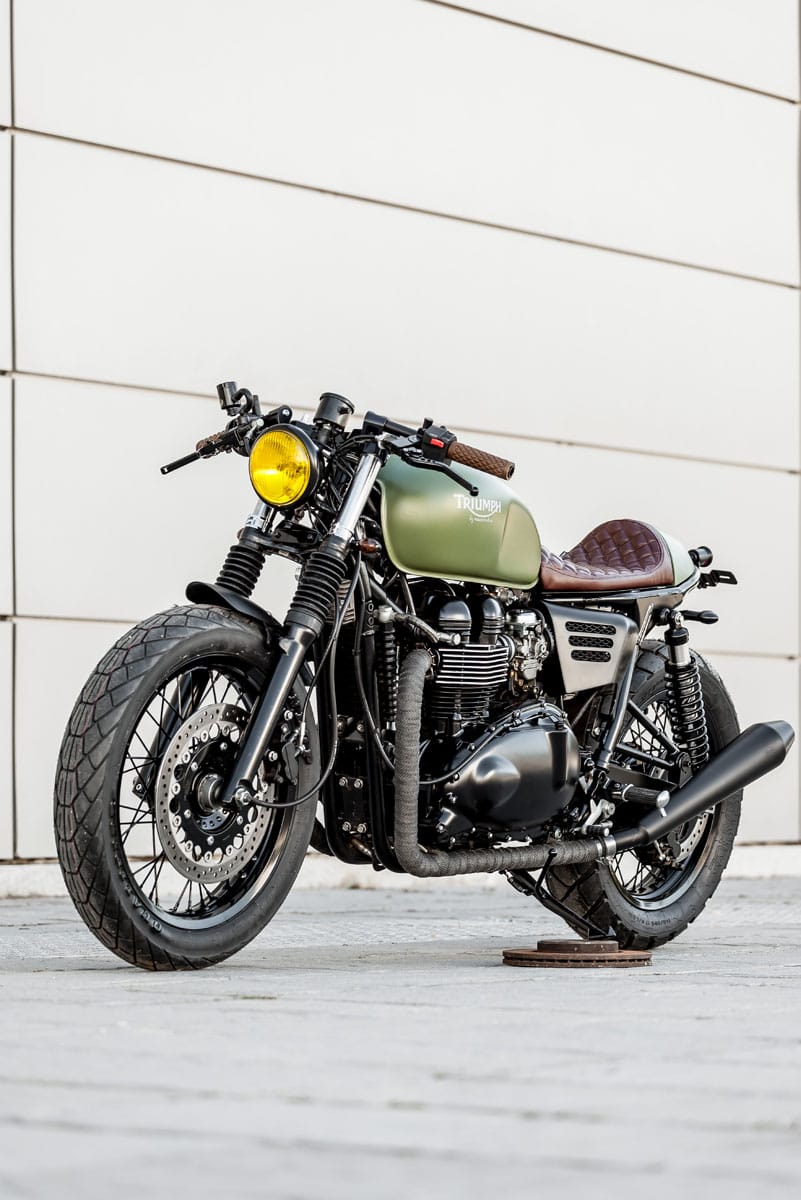 I believe it is the combination of  Jose and Tito’s bike building style and charm, which is getting the team work from all over the Europe and the US. 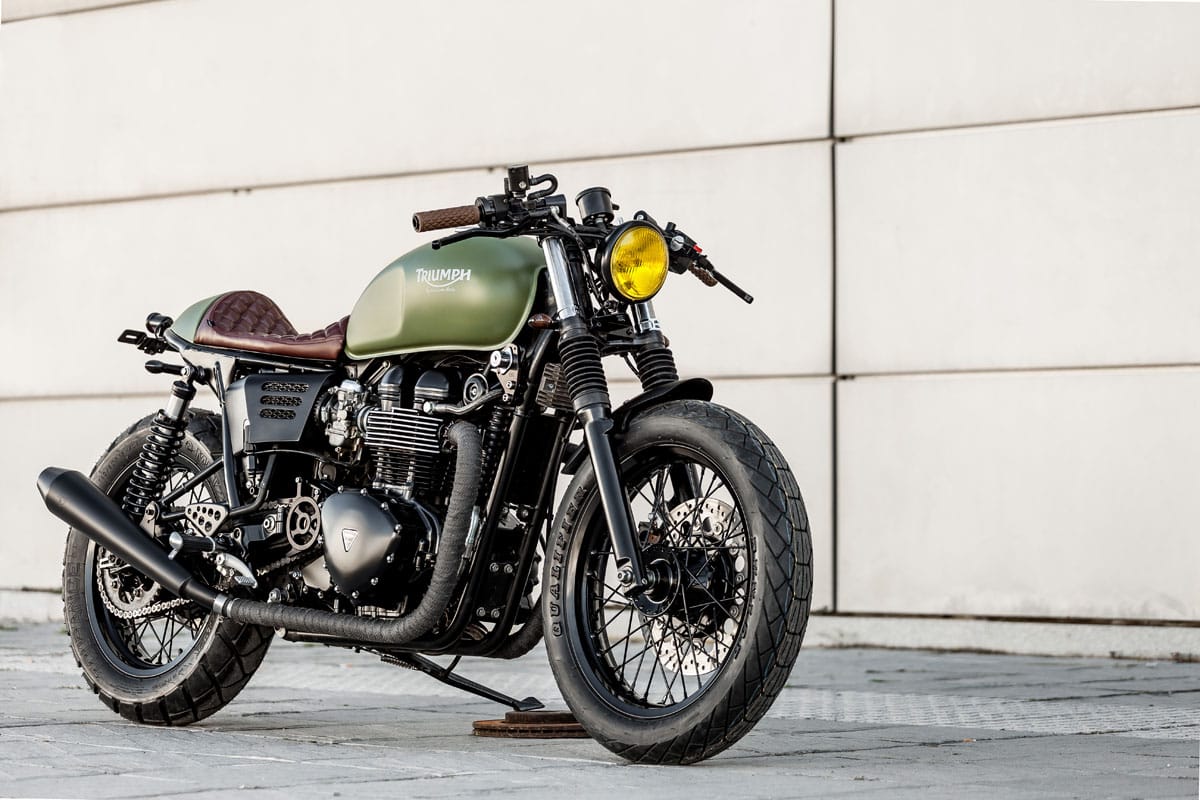 Over the last three years Macco Motors have had much success with the offspring of the Dusty Pearl, with each build sharing a similar overall look, but still being different and unmistakably a Macco Motor. 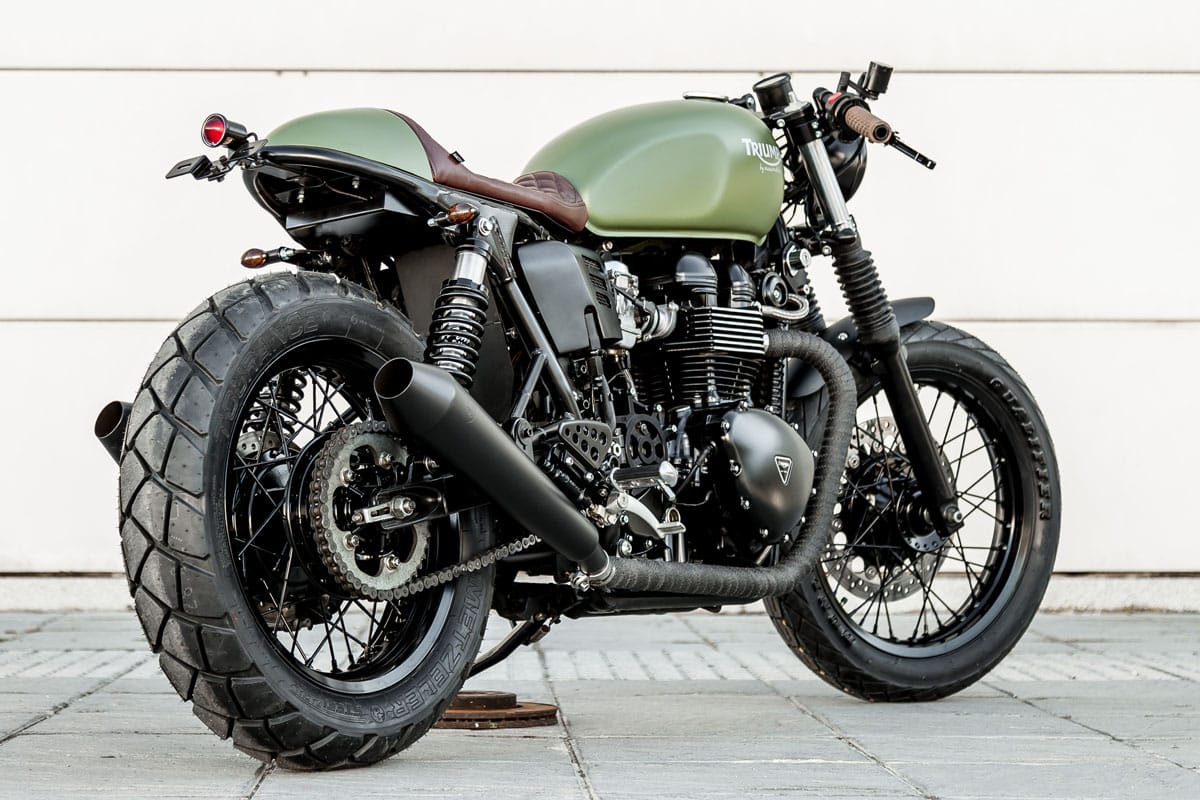 The teams latest creation the ‘Lady Speed’, which is based on a locally sourced 2007 Carb model Thruxton, with just 5,000km on the clock was built for Jarl from Norway, who contacted Jose and Tito earlier in the year wanting them to build a Café Racer, Macco Style – Jarl only criteria for the finished Triumph Twin, was that it needed to be inspired by the matt green of the Morgan Three-wheeler car. 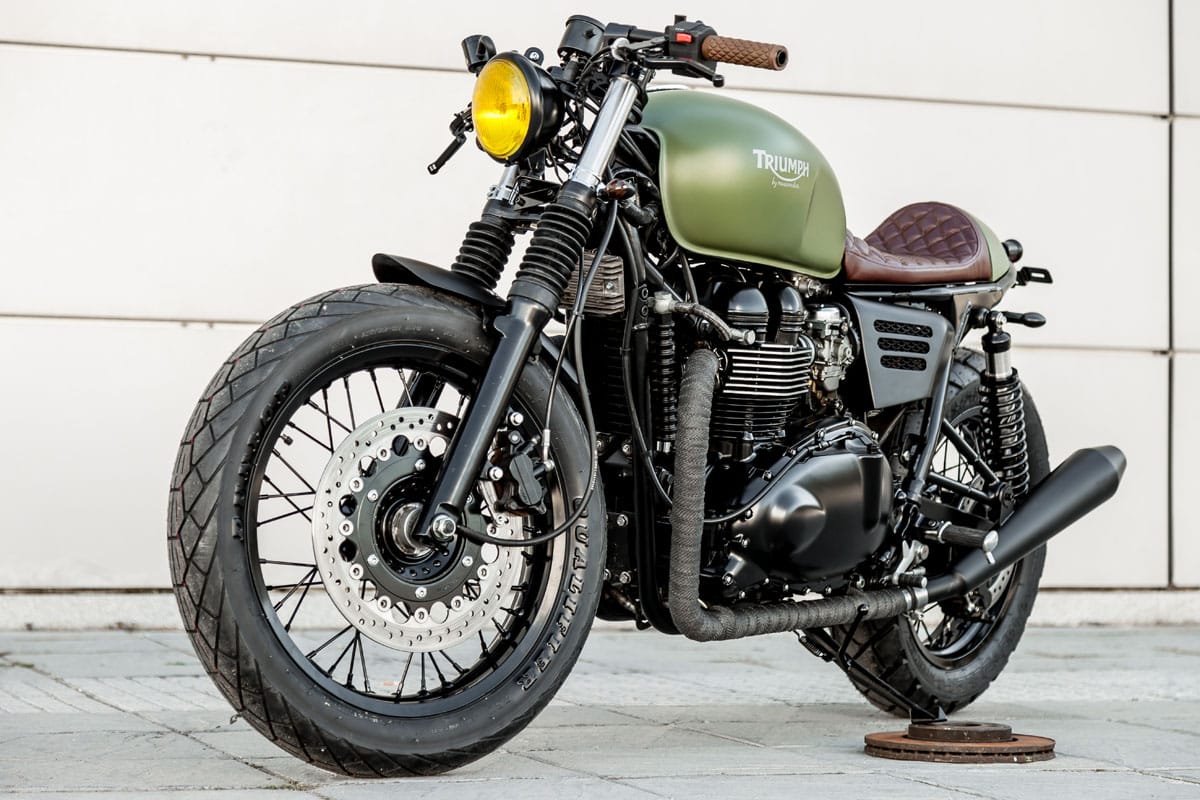 This being Jose and Tito’s first Café Racer build, they knew they had to get it right, and with a Café racer the best place to start is the tail section. If you have taken a look at the new Thruxton and Thruxton R, you cant help but notice the rear end being different from that of the rest of the Triumph Twin range – an important point in making the new Thruxton models look just right. 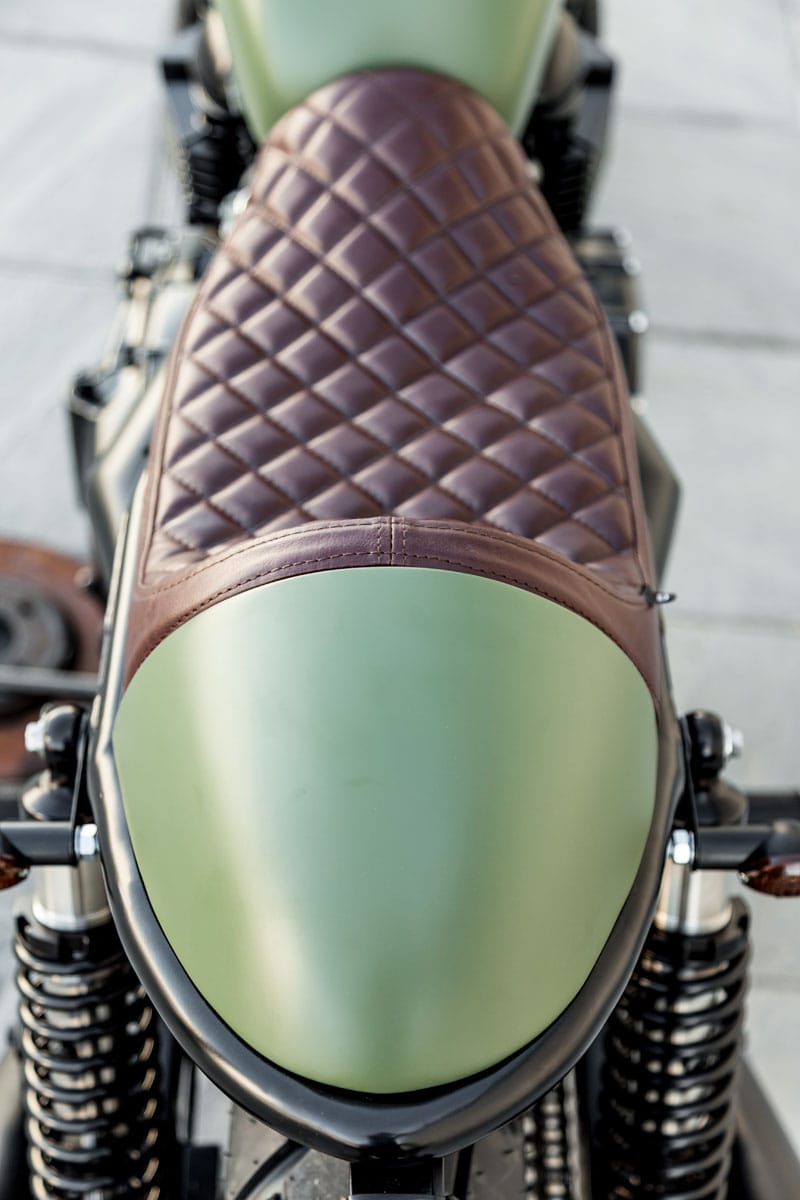 A point which Jose and Tito didn’t miss when cutting and looping  the frame and fabricating a new seat cowl for their Café Racer – a tail section which has been finished off with a beautifully crafted diamond stitched seat and vintage tail-light, and not surprisingly the finished back end looks just like that of the Morgan Three-wheeled car.

Under that seat, and behind those Macco Motors trademark fibreglass side covers, lurks a set of K&N air filters, sitting where the old battery/air box once resided, replaced with a much more compact setup containing much of the Thruxton’s electrikery. 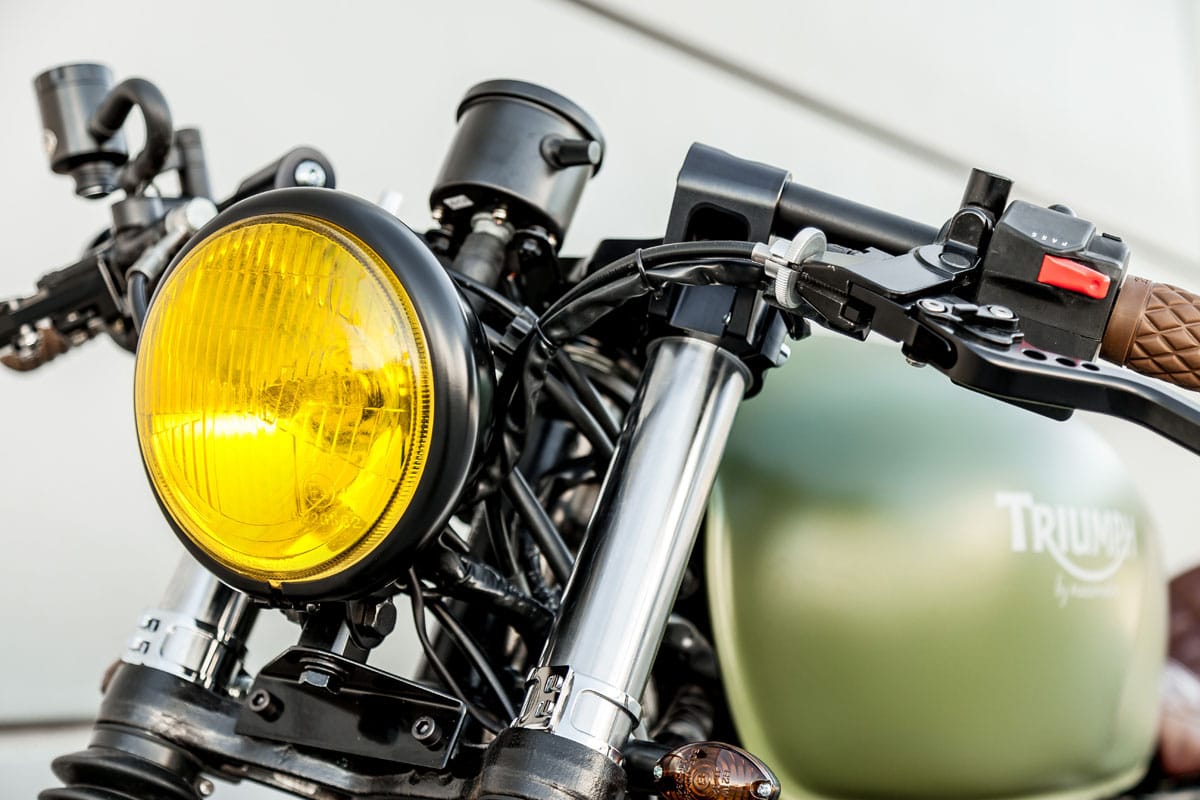 No Café Racer would leave home without a set of clip-on’s, which on this occasion have been fitted with diamond pattern Biltwell Thruster grips, matching the seat nicely. The clip-ons also sport racing style levers, stock switches and a Rizoma brake reservoir. 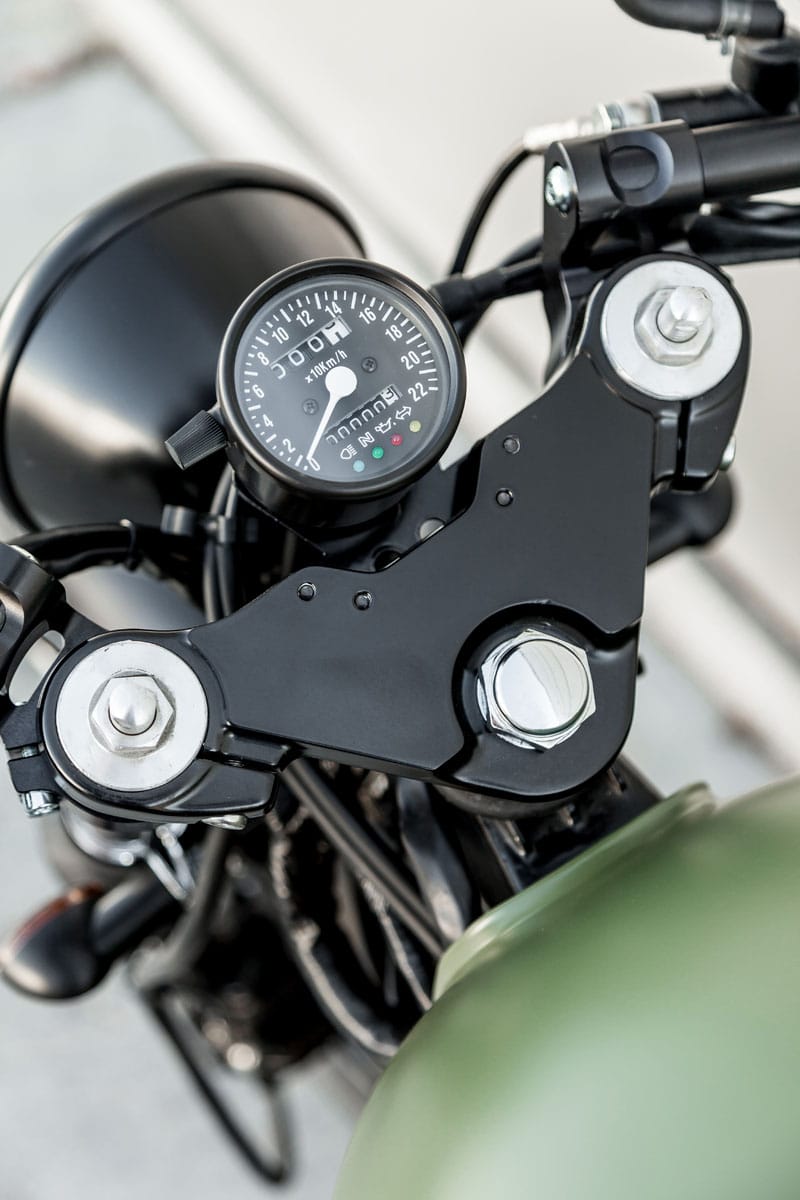 The stock top yoke is gone, as are the clocks, with the speedo being replaced with a more compact item – which combined with the bar set-up and smaller Bates bottom mounted headlight, do a great job of keeping things tidy, and lightening ups the Thruxton’s front end profile. 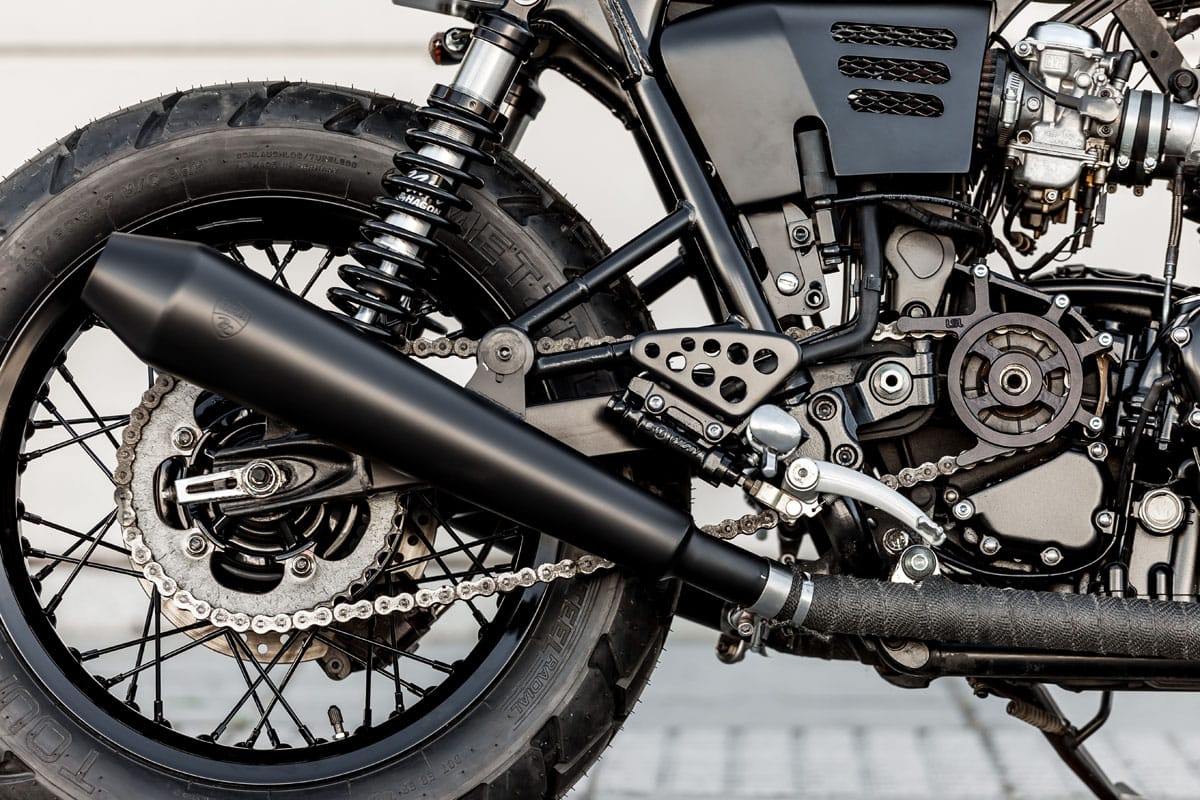 As you would expect, or should demand when modifying a Thruxton, is a much needed suspension upgrade. For the Café build, Jose and Tito opted for Hagon Nitros and Hagon’s progressive springs. Tyre choice is a mix of Dunlop F20 and Metzeler Tourance front and rear respectively – wrapped around black powder-coated rims, with the spray being kept at bay by a Macco Motors fibreglass mudguard.

The build features all the usual relocation brackets, mini turn signals which no Twin should be without, as well as a LSL sprocket cover and a set off alloy foot-pegs both helping shed a little weight. Finishing off Macco Motors first Café build are a set of British Customs Predators end cans on wrapped headers, which will make this Thruxton sound as good as it looks! 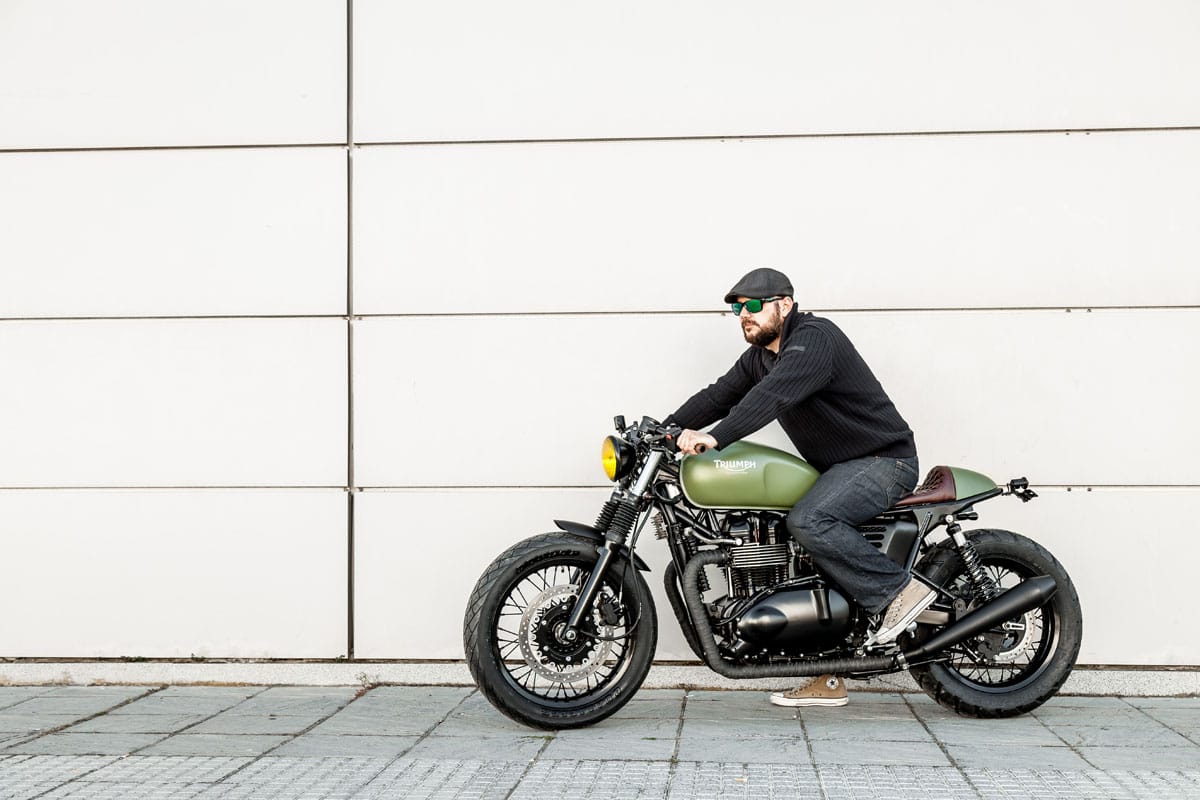