The BSMC event at Tobacco Docks had its ups and downs but for me the most enjoyable part was finaly meeting the people who I been speaking with over the last few years. Combined with seeing and being part of the camaraderie between fellow bike builders such as Jose and Tito from Macco Motors and Shaun and Carl from Down & Out Moto. 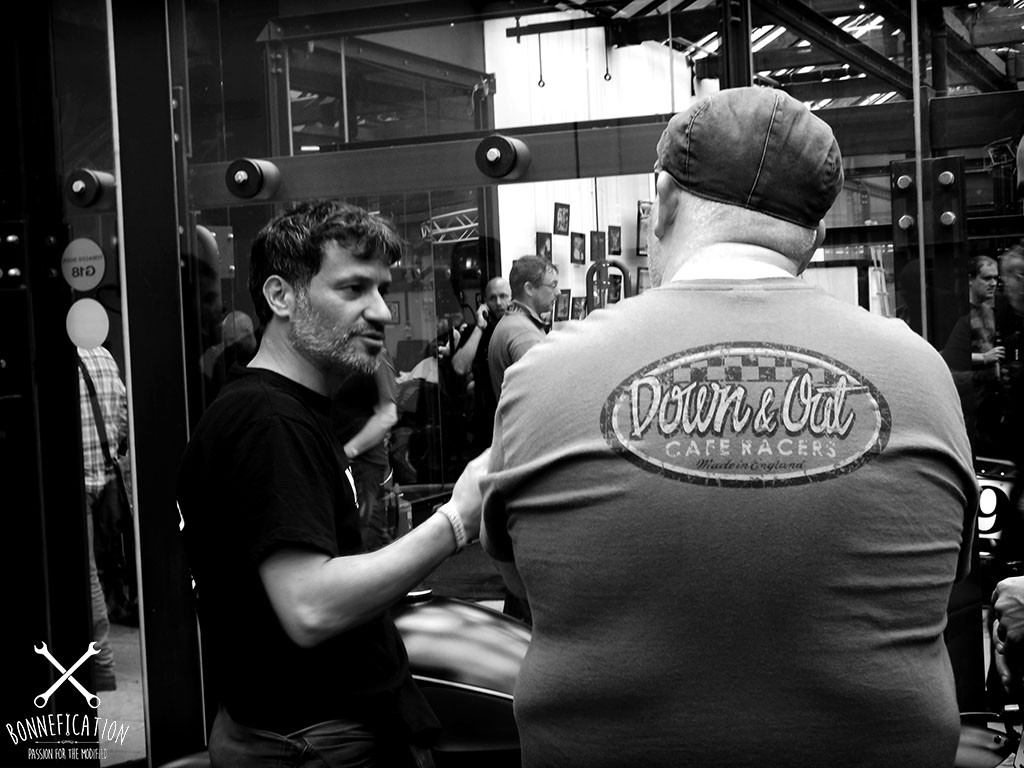 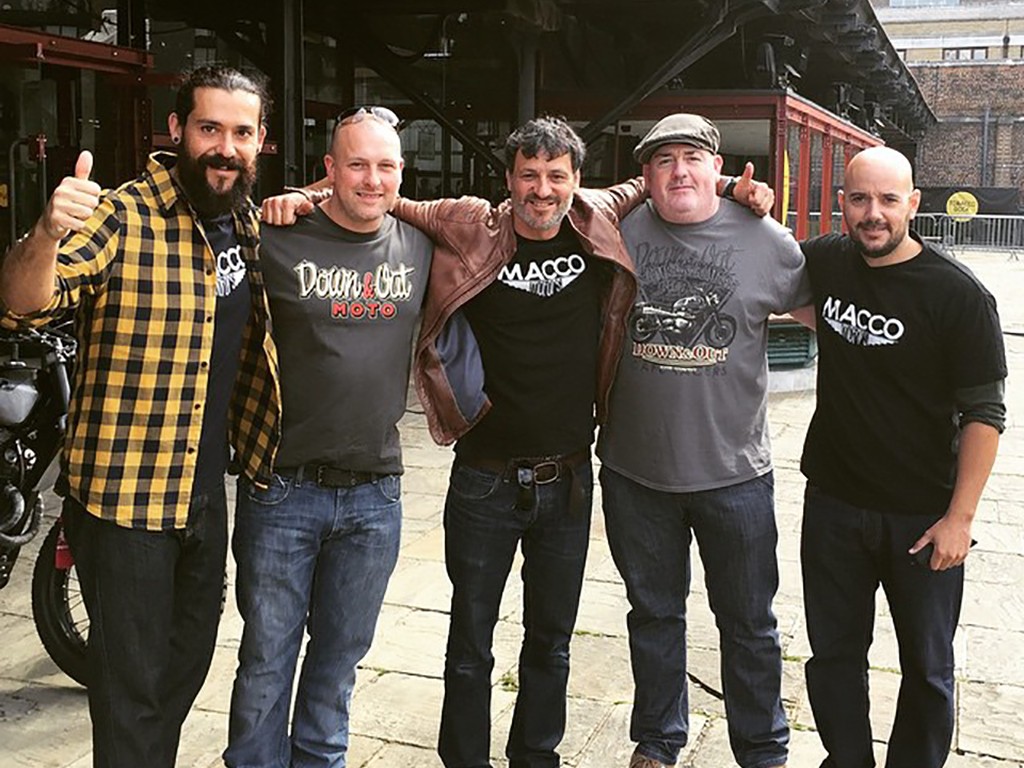 Though these two bike builders are in direct competition with each other,  they greeted and chatted and posed for pictures like old friends. This attitude, I feel is the very Spirit of Bonnefication – a website which was created to share and bring together custom and modified Triumph Twins into one place. A place where the skills and effort that went into each build could be appreciated by liked minded individuals, individuals who also respect each others work and something Bonneficaiton has been doing since 2008. 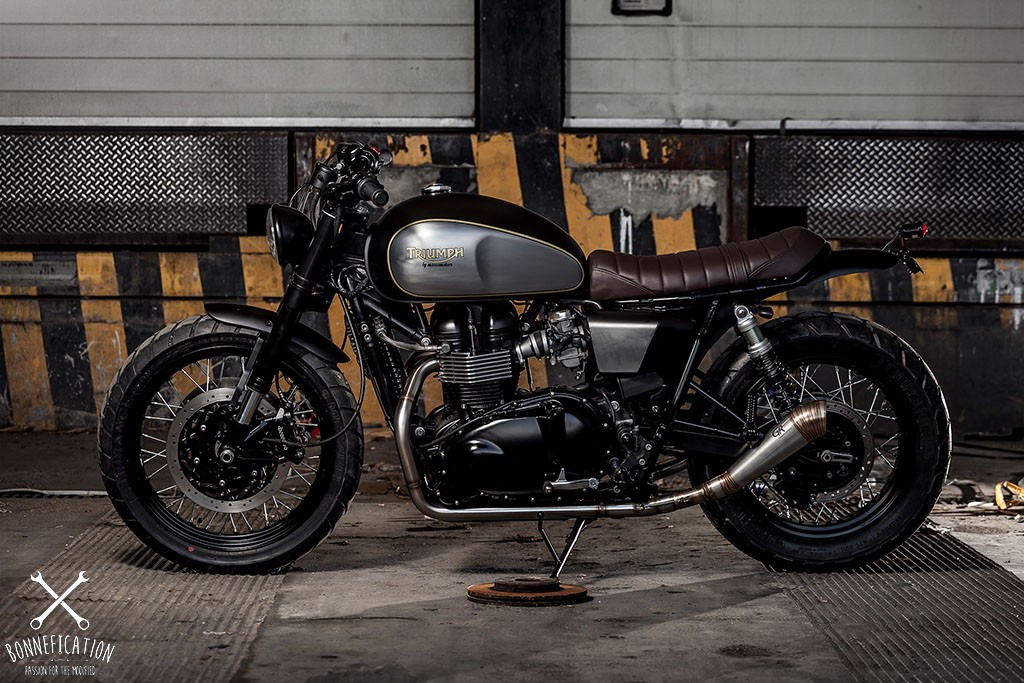 While chatting with Jose & Tito we spoke about there latest build the “Foxy Lady”  a build based on a EFI – 2010 Triumph T100. A bike which is now owned by a client in the UK. Unlike Macco Motors previous build, which were based on the incredibly successful Dusty Pearl, the ‘Foxy Lady’  is the basis for a new series of bikes which now includes even more upgrades. 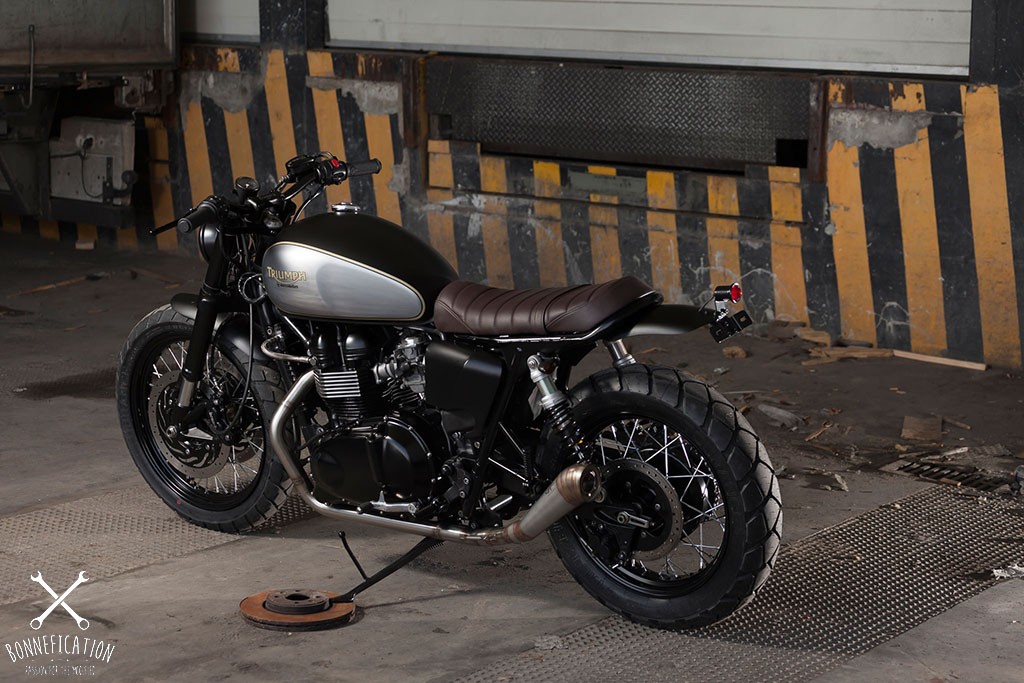 Originally the Foxy Lady was to be kept by Jose & Tito, but due to the demand of clients looking to buy their work, they had to let this one go. They now have two other build based on the Foxy Lady in the works, one of which is being shipped off to Miami Florida and goes to show just how far Macco Motors reach now extends. 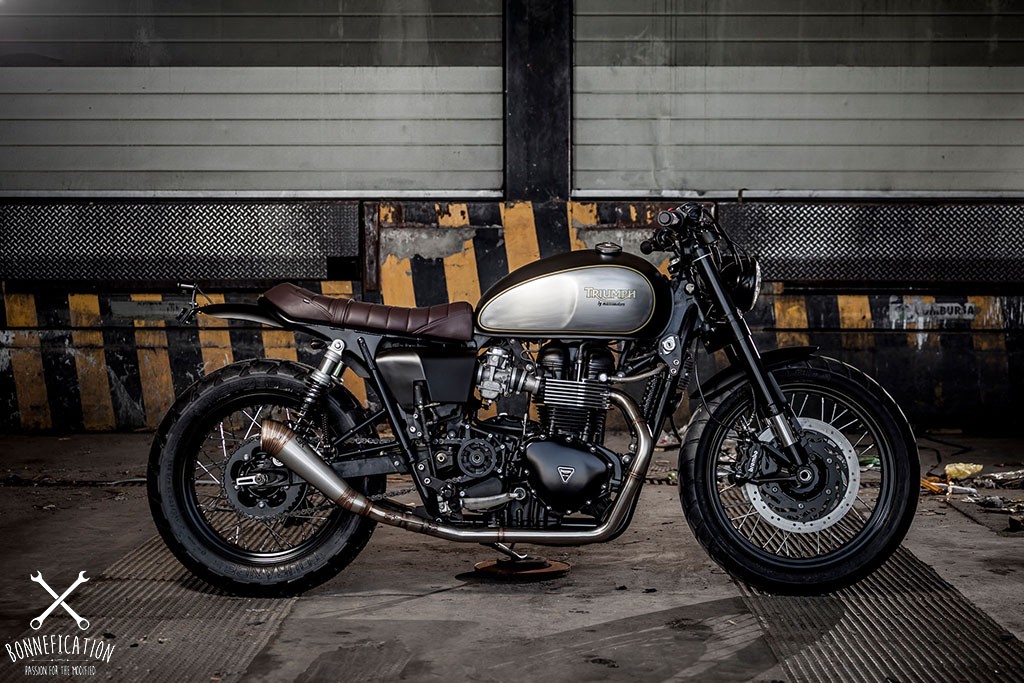 The basis of the Foxy Lady build was to increase performance and handling so Jose & Tito started at the front end, fitting black painted Öhlins USD’s from a Ducati Monster 1100 EVO, forks which also included the dual Brembo callipers. 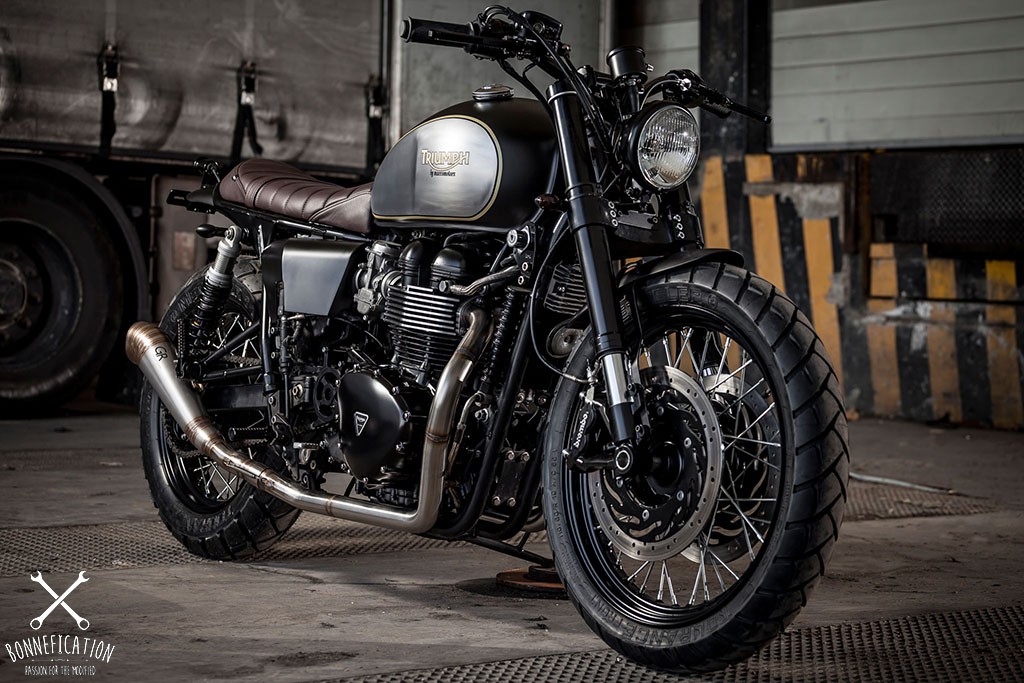 The fitting of the Ducati forks to the Triumph Twin was made possible by using black of-the-shelf yokes from Free Spirt and re-machining a new axel, which was then pared with a 19″ black rim (with matching 17″ rear) laced to the hub from a Thunderbird Supersport. To finish off both front and back wheels where then fitted with Metzeler Tourance’s tires (110/80/19 front 140/80/17 rear)

The riding position has been unproved with the fitting of Biltwell Trackers bars with stock switches, paired with LSL Clubman grips and Racing style clutch/brake levers, this lead down to the XS650 style mini speedo and centre mounted Bates headlight and onto the ever-present ignition relocation bracket. 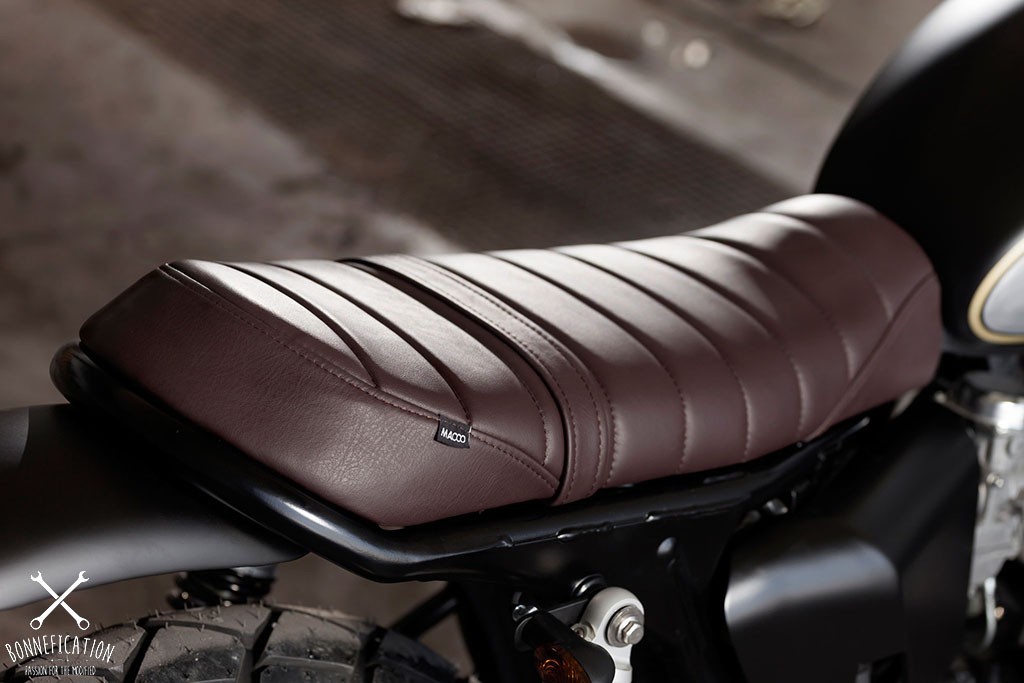 At the back is everything you would want and expect from Maccco Motor, with the frame being chopped and a looped added. The modified frame has then been fitted a custom seat covered in brown leather, along with custom glass fibre mudguard and classic Bates style tail light. The suspension at the rear has also had a big upgraded, being fitted with Öhlins to match the front. 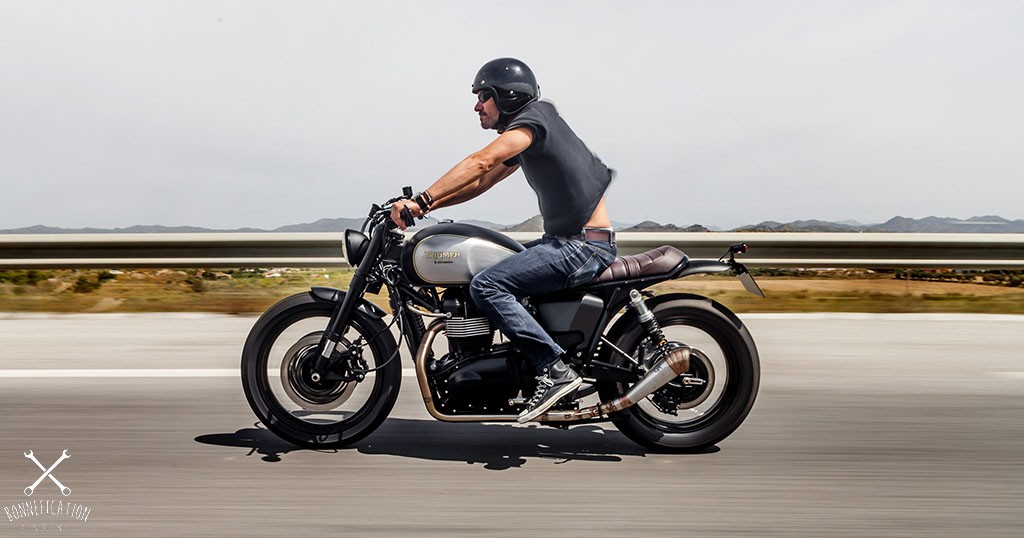 Gone on Foxy Lady are Macco’s trademark vented side cover which have been replaced by the new custom steel items which where recently fitted to their Steadfast build whichwe featured in May – these covers give the bike a cool industrial and bespoke finish which won’t be seen on too many other bikes.

Jose & Tito wanted the Foxy Lady to have a modern/classic look, so with the help from Roberto from GR Exhausts, the team designed a raw looking system which goes from round at the headers to oval at the end cans – an overall look that looks pretty damn cool. 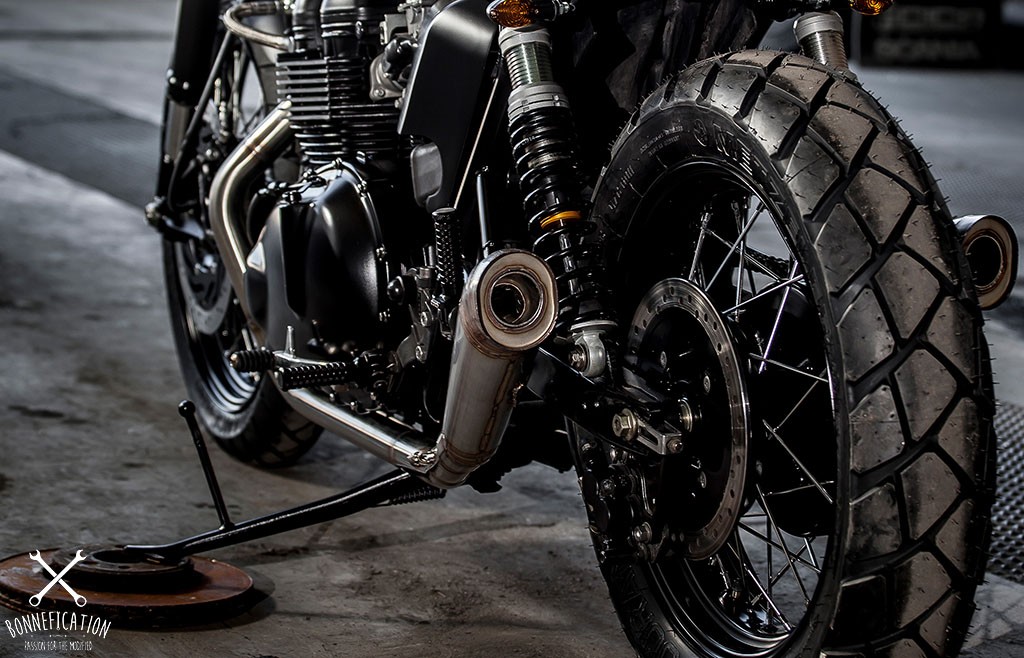 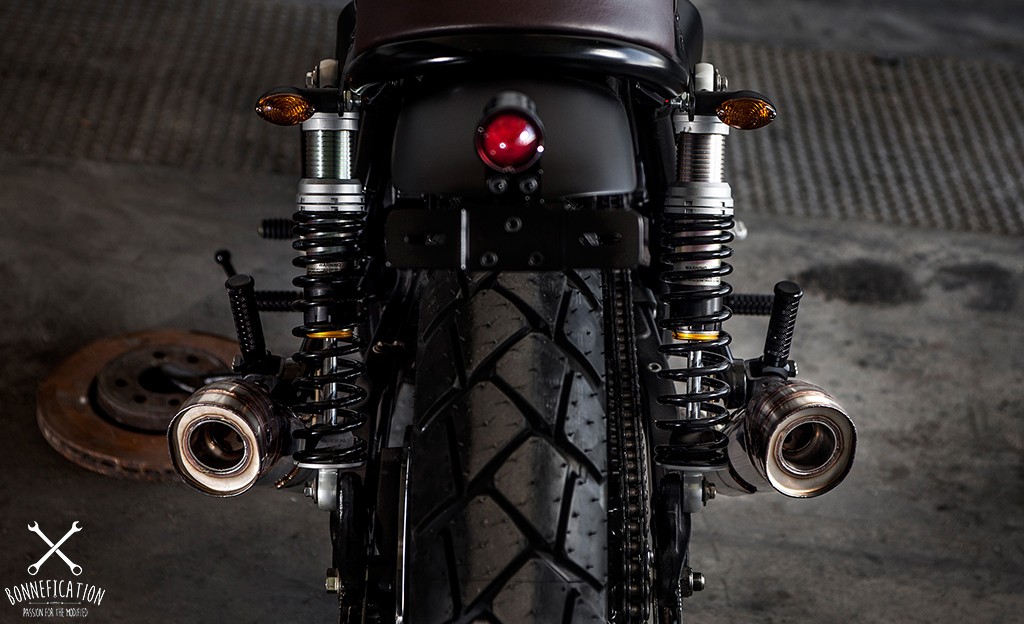 The paint on the tank is instantly recognisable and typically Macco Motors and is more in keeping with their original Dusty Pearl build than its off-spring. On this accession Jose & Tito went for the traditional super slick matt black, but with a gold stripe and larger area of raw steel on the sides. A paint scheme which is perhaps only ever worn by the first of its kind, I suppose only time will tell. 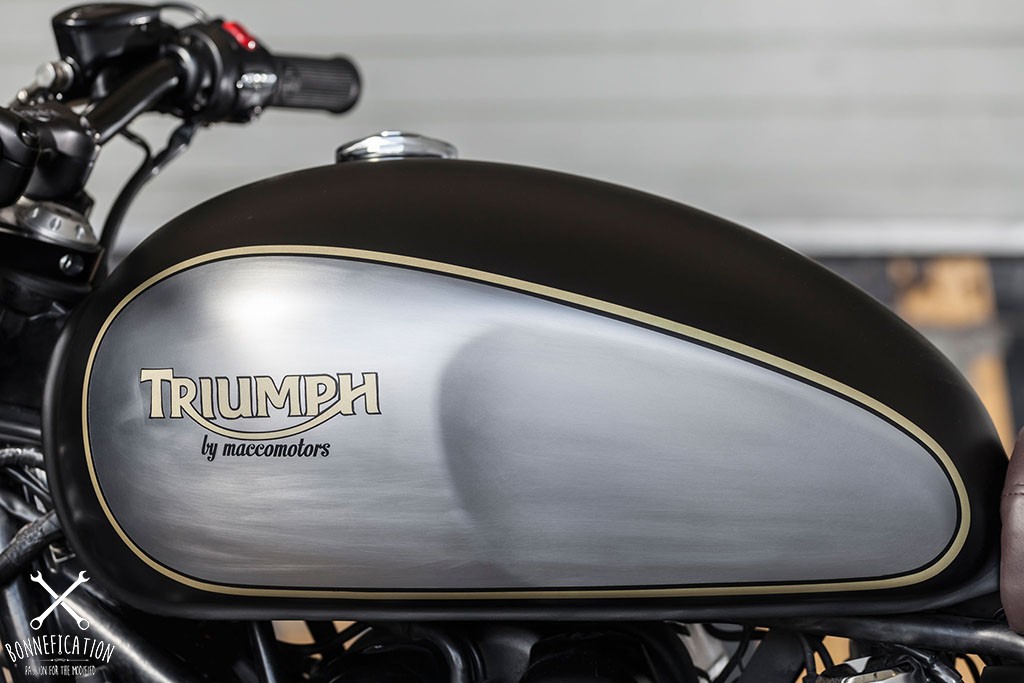 Macco Motors can be found on all the usual social media places including Facebook, Instagram and on their website at www.maccomotors.com. Also check out their previous builds here