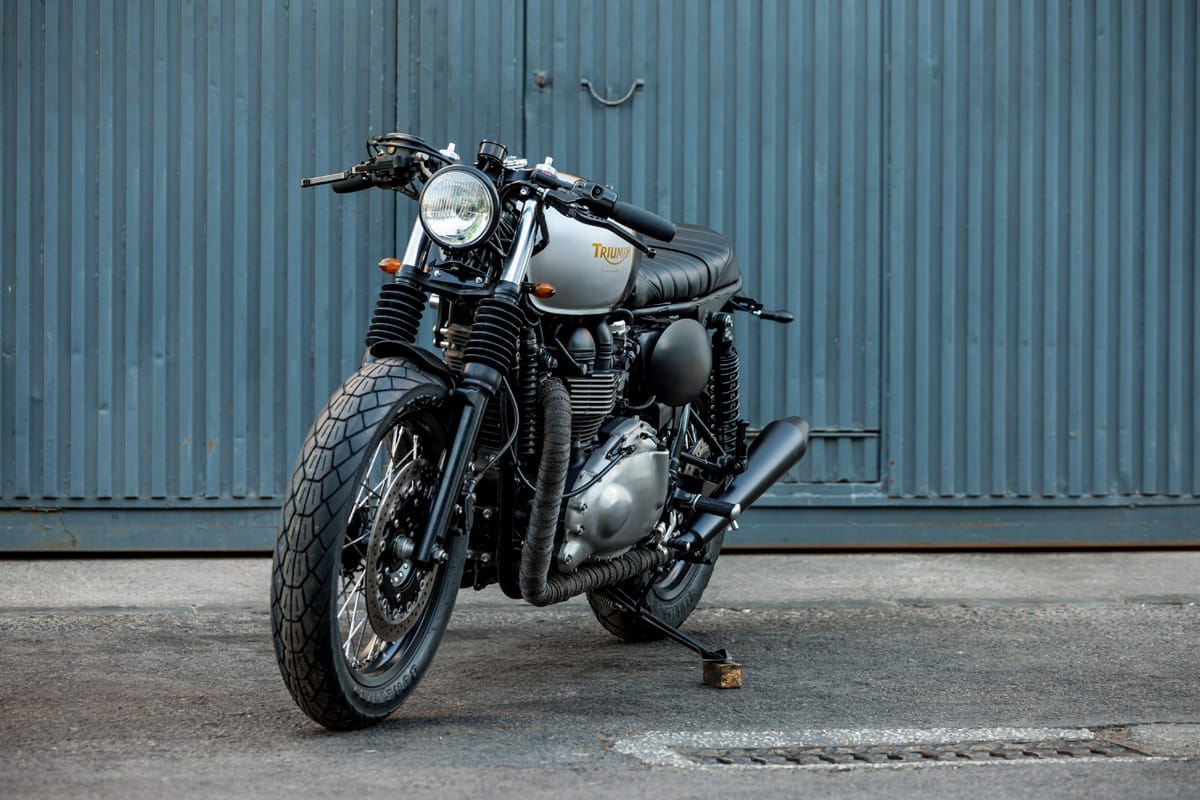 The seventeen motorcycles we featured were just a fraction of the Custom Triumph Twins to roll out of Jose and Tito’s Cádiz based workshop, and its no surprise, with their build quality and Macco Motors styling, the duos builds have rightly found satisfied clients in both Europe and the US. 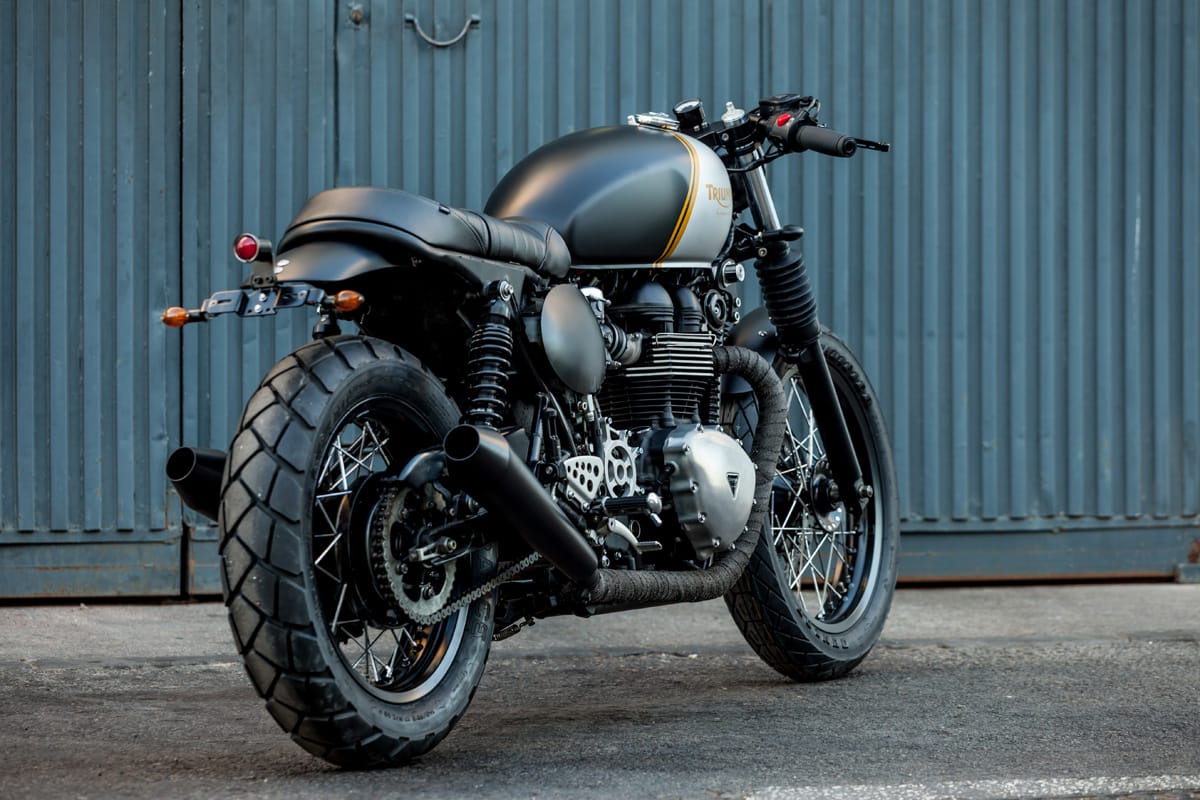 The eighteenth Macco Triumph Twin to be featured here on Bonnefication.com is the “Black Swan”, a build based on a 2012 EFI model Thruxton, a build which was commissioned by Madrid based Graphic Designer Sergio. Who’s brief was simple, build a Café Racer with everyday usability for both rider and pillion. 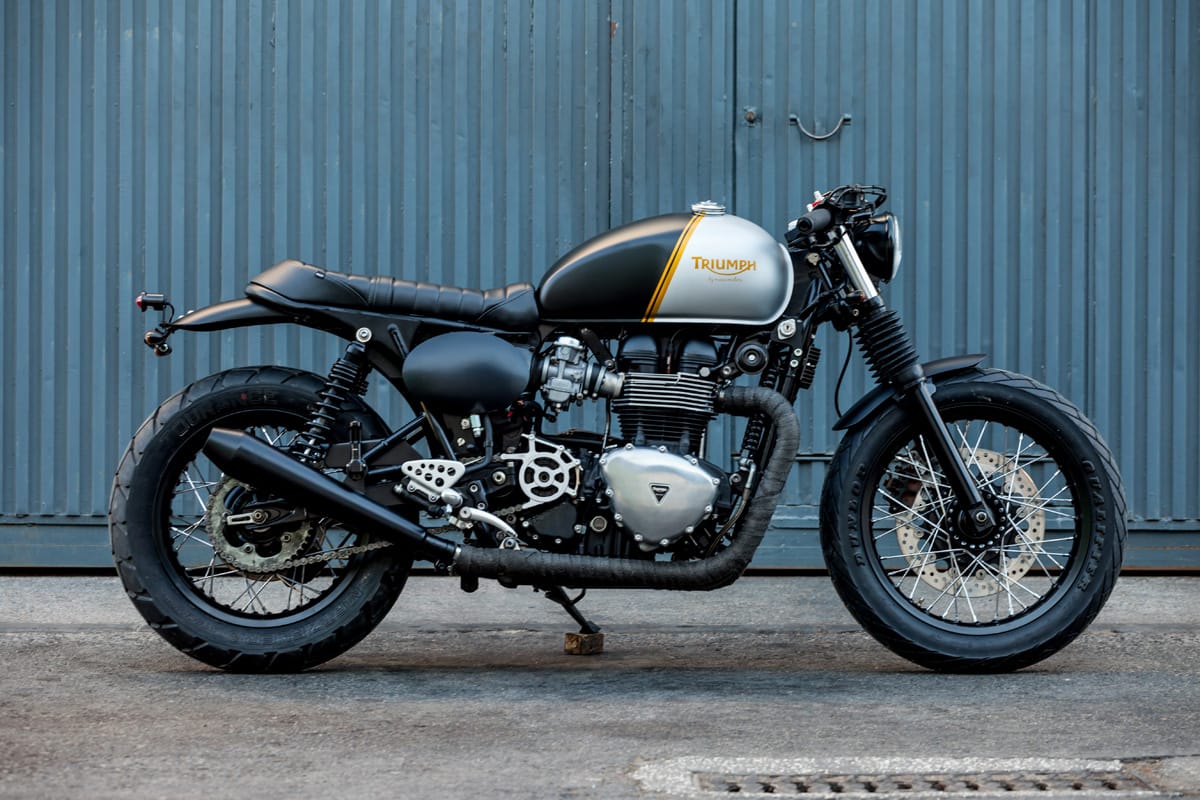 This air-cooled Thruxton has had all the usual frame and styling modifications we expect on a well-built custom Triumph Twin, typically topped off with a nicely sculpted and upholstered seat and short glass-fibre mudguards both front and rear – with the rear being fitted with a vintage-style tail-light and compact turn signals. 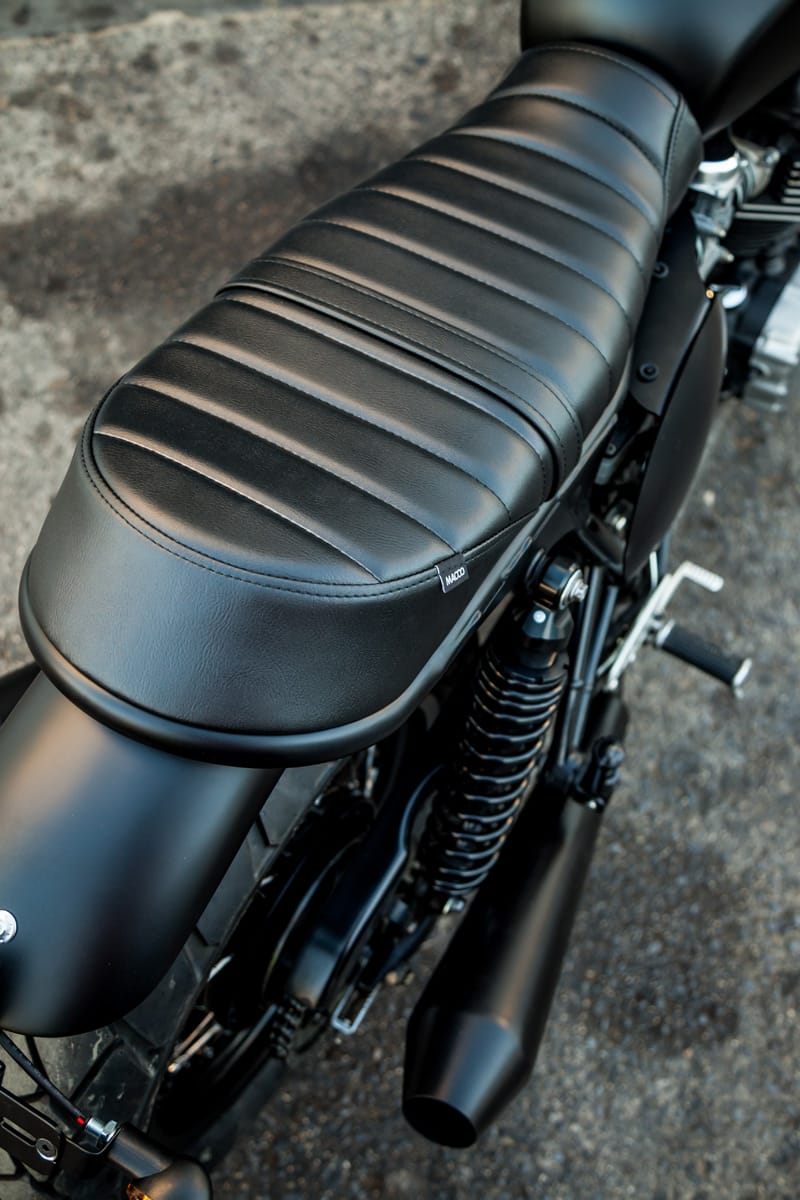 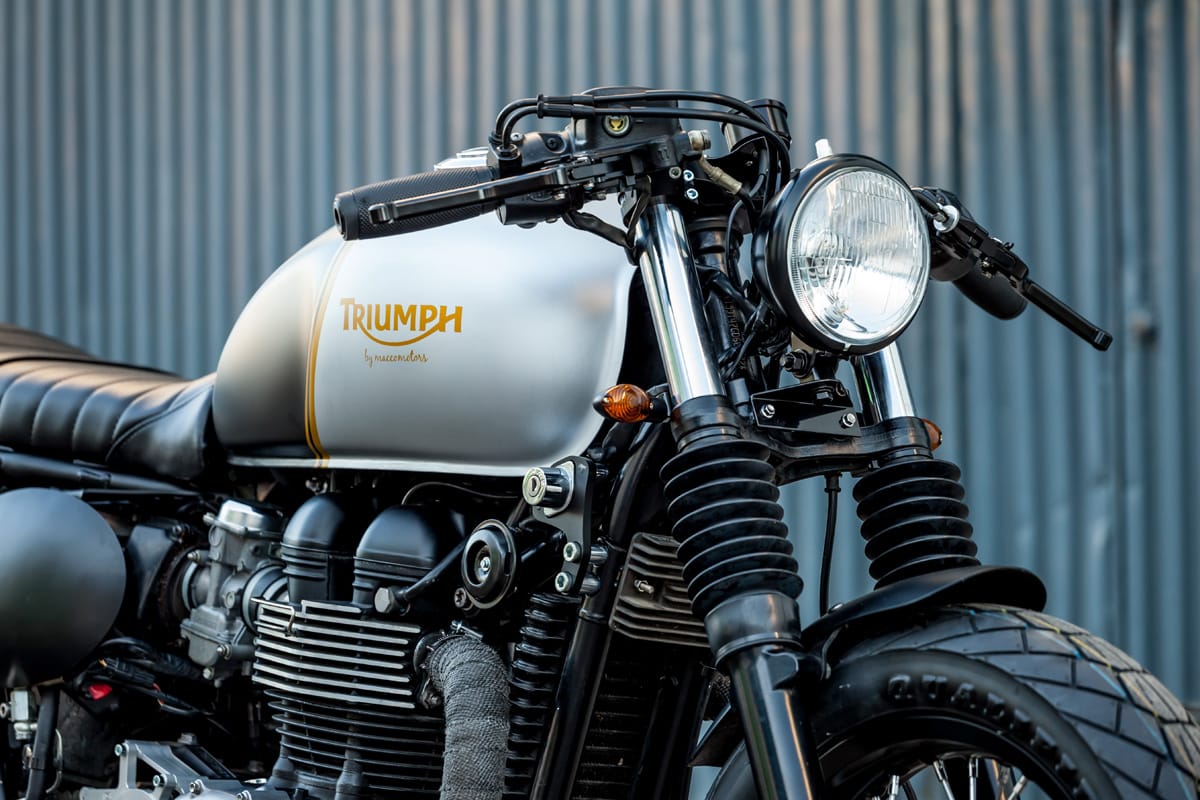 Up top are clip-on’s from the LSL catalogue, fitted with the stock switches and a set of racing-style clutch and brake levers. Adding to the stripped-down front end is the ever popular, and for good reason, Motogadget Tiny speedo, which on these CAN Bus Triumph Twins (digital taco) is connected via Motogadget’s plug and play m.tri unit. 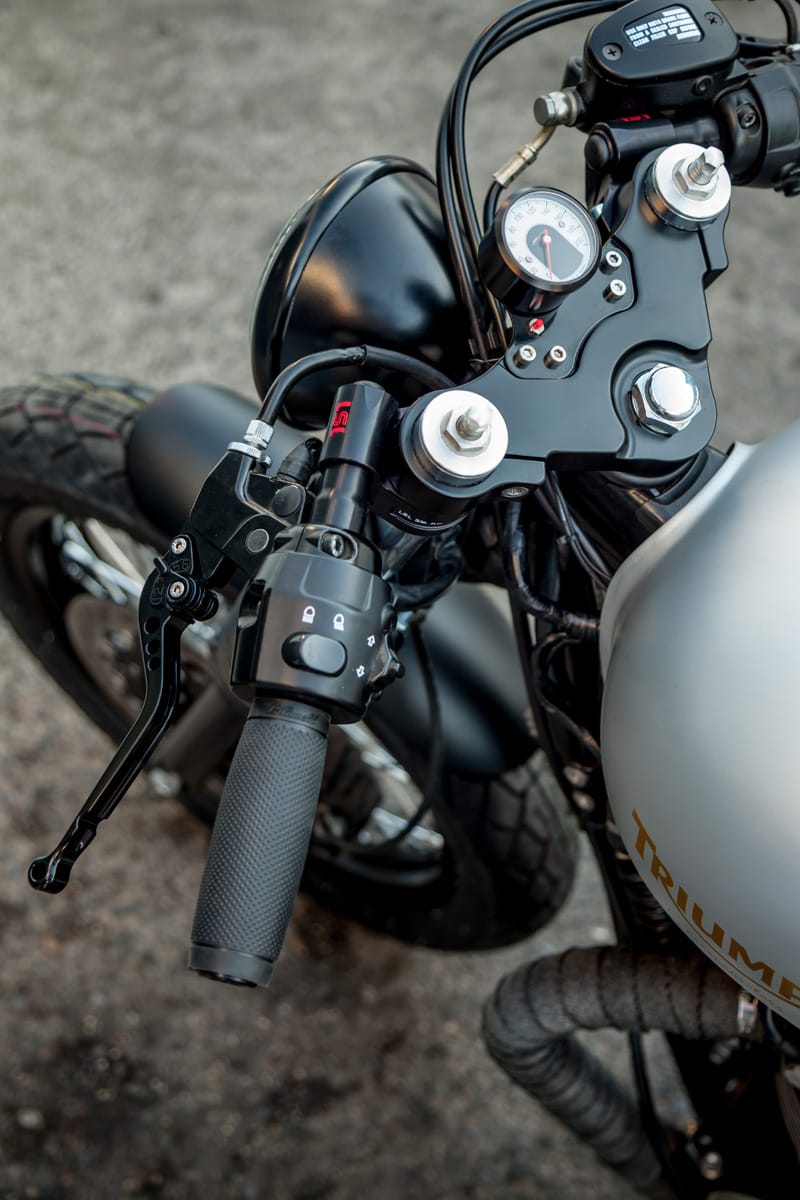 Details are aplenty on this Thruxton build, starting with Macco Motors trademark silver and black paint scheme, a colour and finish which envelops most of the Triumph including its custom side panels and mudguards. This aptly named Black Swan is also fitted with more attractive, and less clunky alloy foot-pegs front and rear. Other details include the obligatory relocation of both the ignition switch and rectifier, which on this occasion have found new homes thanks to LSL, who also supplied the sprocket cover. 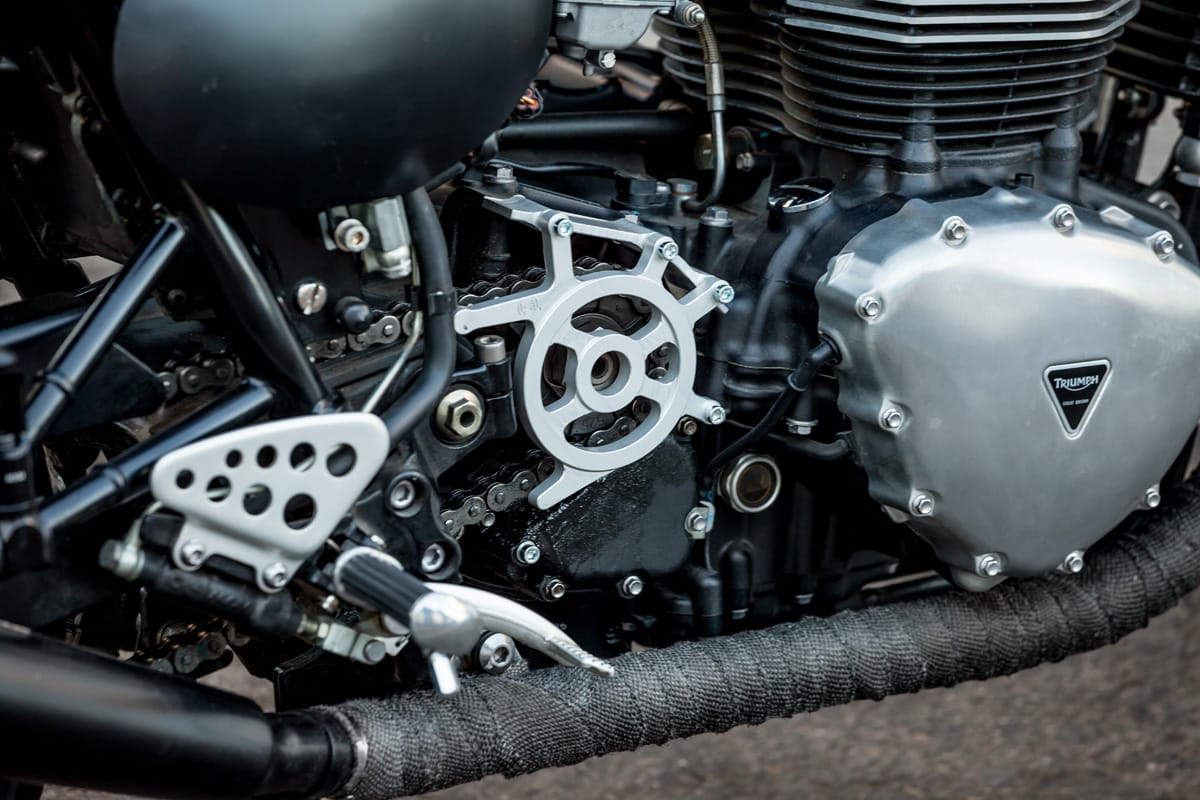 There is little point in making a Hinckley Triumph Twin look this good without it having its very own soundtrack, which on this build is a black and heat wrapped 2 into 2 Predator exhausts system made by custom Triumph Parts specialist British Customs. 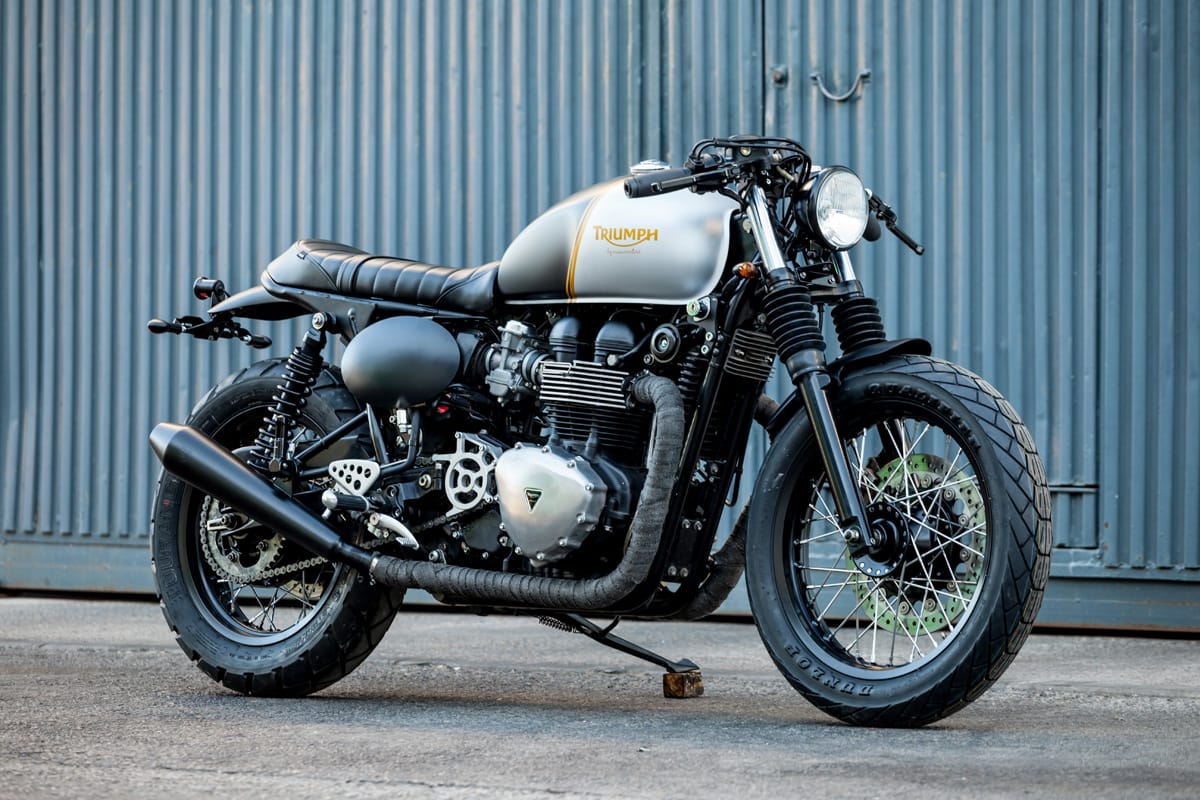 Upgrades continue with progressive springs being fitted at the front, with the rear being given a set of progressive Bitubo shocks. The finished Classic Twin now sits on a mix of tyres, with a Dunlop F20 being fitted to the front, and a Metzeler Tourance at the rear. Now this custom 2012 Triumph Thruxton, aka the Black Swan should be as calm and graceful as it looks, unlike its name sake. 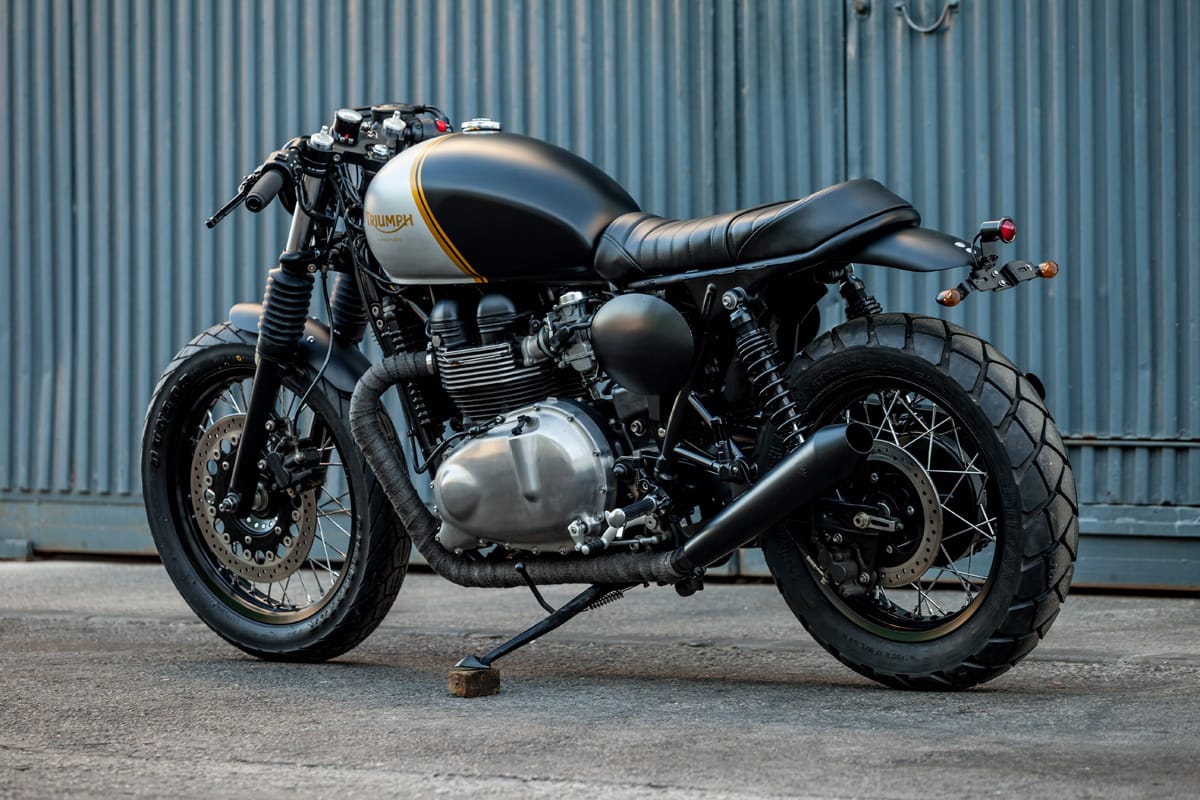