Today was the unveiling of the VENOM, a Triumph built to celebrate the upcoming was the launch of KONAMI’s METAL GEAR SOLID V: THE PHANTOM PAIN, a series of games which many of you and myself included have never played. But then, the lead character in the Game ‘Snake‘ (real name David) in both Metal Gear 4 and Metal Gear Solid; Peace Walker does ride a Triumph Twin (see, you do have something in common). He also has an IQ of 180, speaks 6 languages and is known as the man who “makes the impossible possible” Which clearly explains why he rides a Triumph Twin…. I mean what else would an intelligent guy ride! 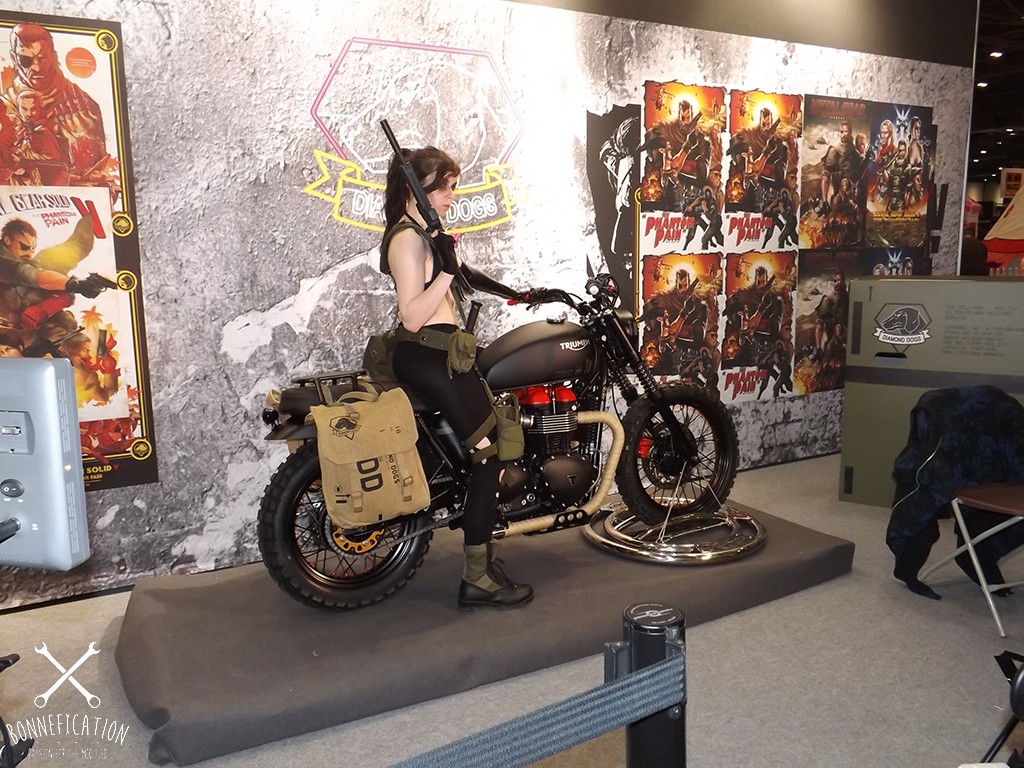 To usher in the latest instalment of the popular computer game, what would be better than a custom built Triumph Twin fit for a ‘Snake‘. A bike which was built at the Triumph factory here in the UK – Triumph have been going from strength to strength over the last few years showing support for those that have a passion for modifying the Twin, which is clearly demonstrated in this collaboration and their support for shows such as the Bike Shed Event. 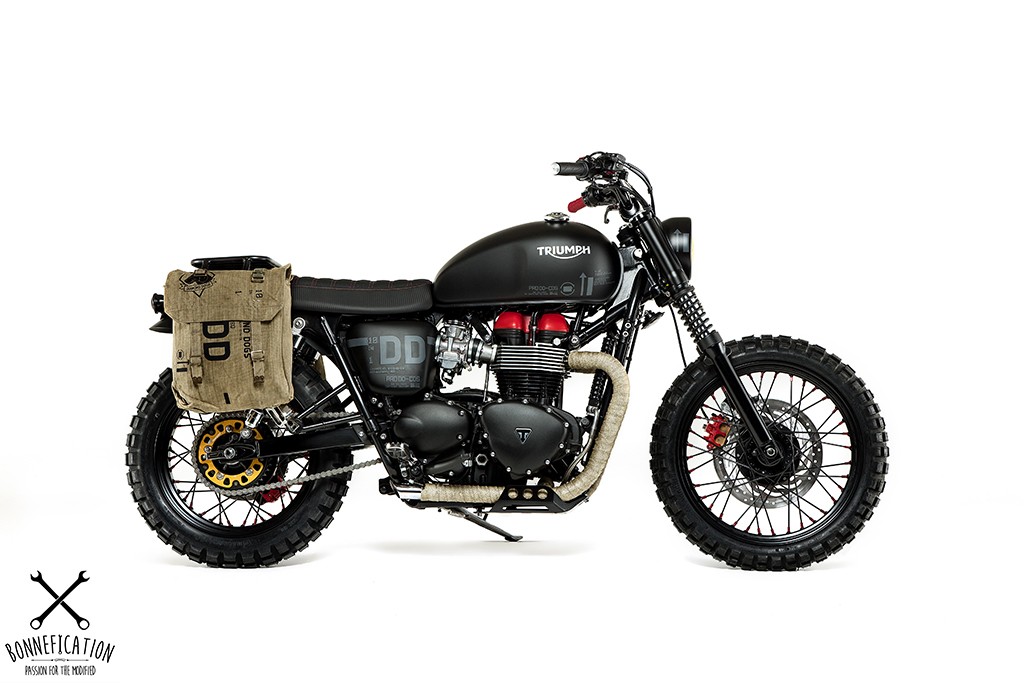 The venue for the unveiling was the popular and somewhat crazy MCM London Comic Con, an event for those with a passion for all things Fantasy and Sci-fi. Events such as this are the only place I know that you will see people dressed as characters from Transformers, Star Wars, Bat Man, Star Trek and perhaps Manga Porn…(far to many short skirts). Its not my thing, but you can’t criticise anyone with a passion and the effort many put into their outfits puts some custom built bikes to shame, I kid you not. 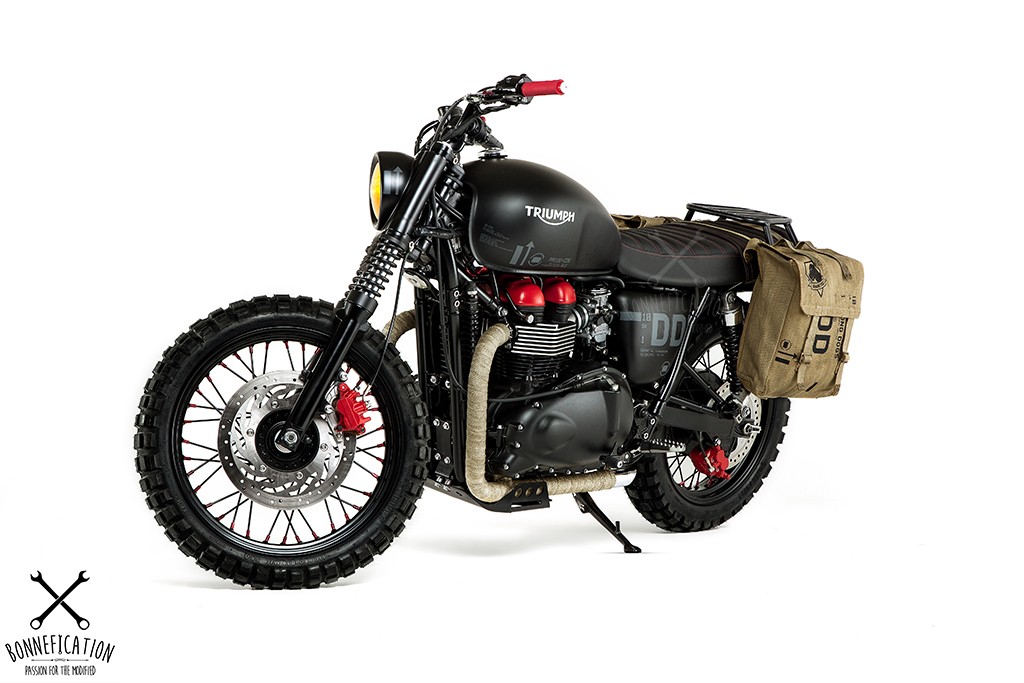 The ‘Venom’ is Based on a 2015 Triumph Bonneville T100, which is the same model of Triumph which  ‘Snake‘ rides in the latest instalment of Metal Gear Solid. To reflect the tough attitude of ‘Snake‘ the T100 needed to dispense with all the niceties and legal requirements of modern the motorcycle, so gone are the Mickey Mouse mirrors, oversized speedo and rev counter indicators and of course street legal pipes, which have been dumped for something slash cut, wrapped and a whole lot louder and cooler. 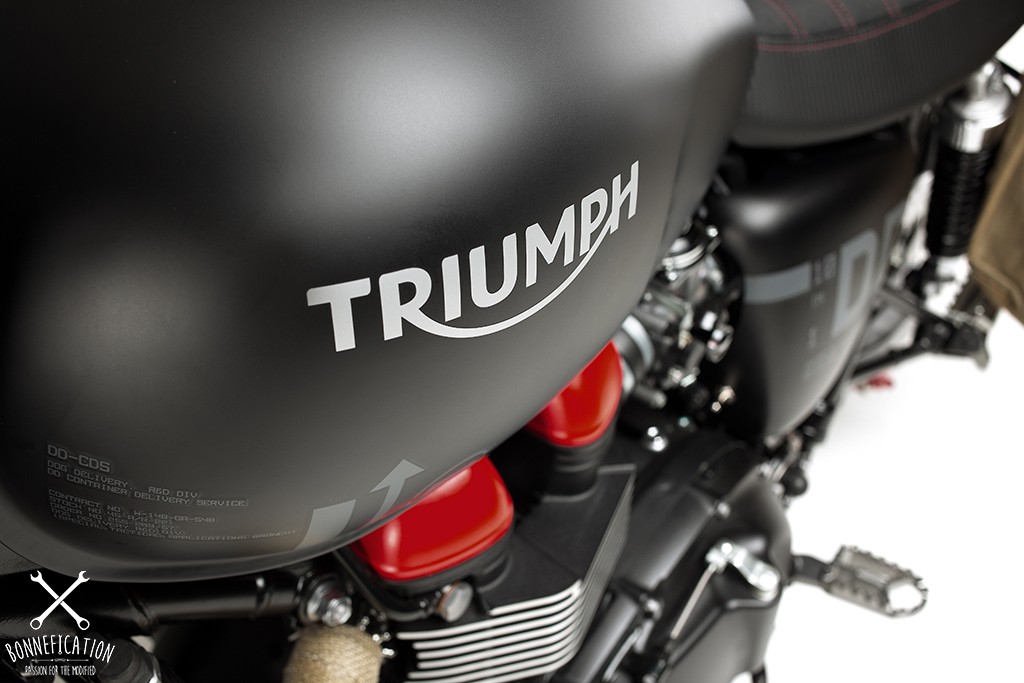 The wheels have been custom built and fitted with the popular Continental TKC80 tyres. The stock brake callipers and cam cover have been coated red which is in Metal Gear Solid theme. The front light is the JVB Rumbler headlight, which we have seen on a few builds, a good looking and perhaps underused product in my opinion. The rear light is in the shape of an exclamation mark (!), something which is featured in-game and represent that perhaps opponent is aware of ‘Snake‘ or maybe there could be danger (the loud pipes on the Venom will do that) 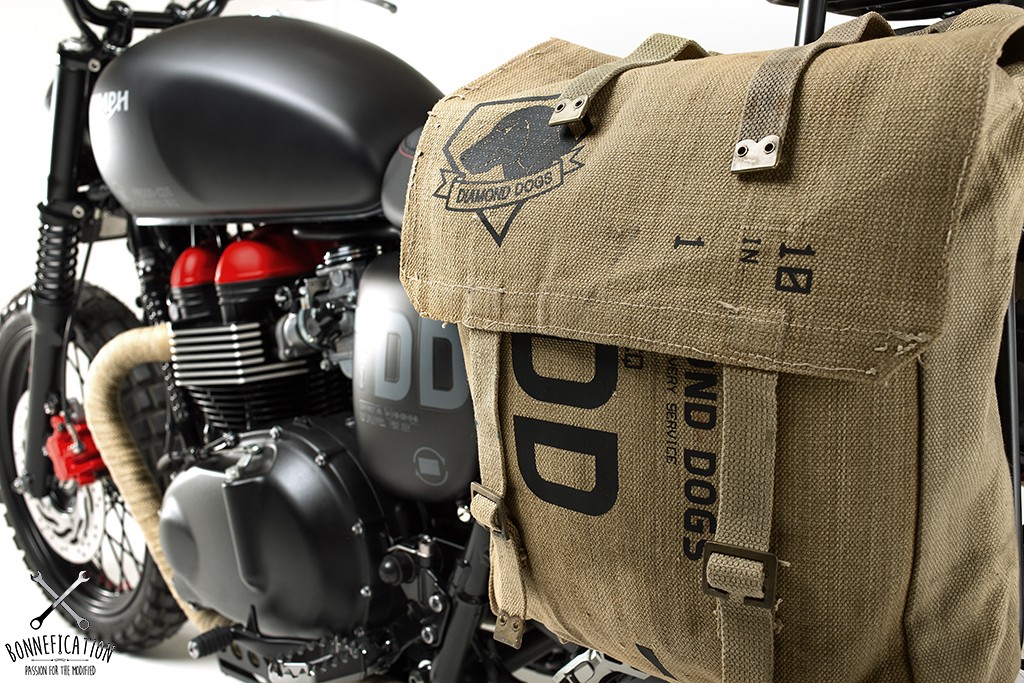 The Venom also features Sneaksuit neoprene leather/carbon leather saddle, which Im sure not many have seen and looks great in the flesh (no pun intended). The custom seat also goes really well with the satin black paintwork which features those Metal Gear Solid game graphics. Now, some of you just may notice those canvas bags which use Army surplus panniers and custom mounts… They are perfect for any tough guy, as there are really not many places to keep the weaponry and a man like Snake needs just to do a days work.