For the last ten years the inhabitants of Neukirchen in Austria have hosted the greatest Triumph
motorcycle show on earth. Held over three days in late September the entire town hands itself over to the Tridays organisers – with the locals fully embracing the event, even renaming the town for the duration from Neukirchen to a more English sounding ‘Newchurch’ 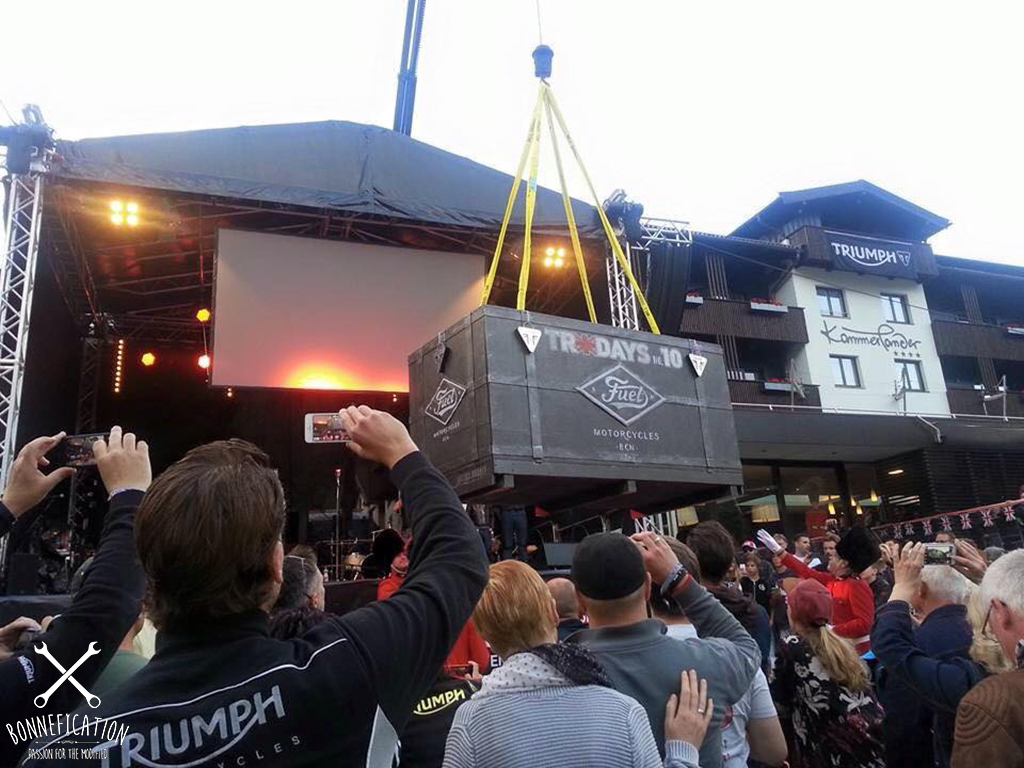 The inhabitant and visitors to ‘Newchurch’ then all go crazy celebrating everything that is British from Freddie Mercury to dressing up as a real ‘Queen‘ surrounded by Guardsmen wearing Bearskins. But the fun doesn’t stop there, the organisers have arranged motorcycle tour of the local countryside, concerts and races which are held on a dirt track, waved off by a cute Austrian girl wearing a pretty dress waving a big chequered flag. This is all made even better by availability of ample quantities of good beer, which often leads to a few people asking the aforementioned flag girl out on a drunken date. 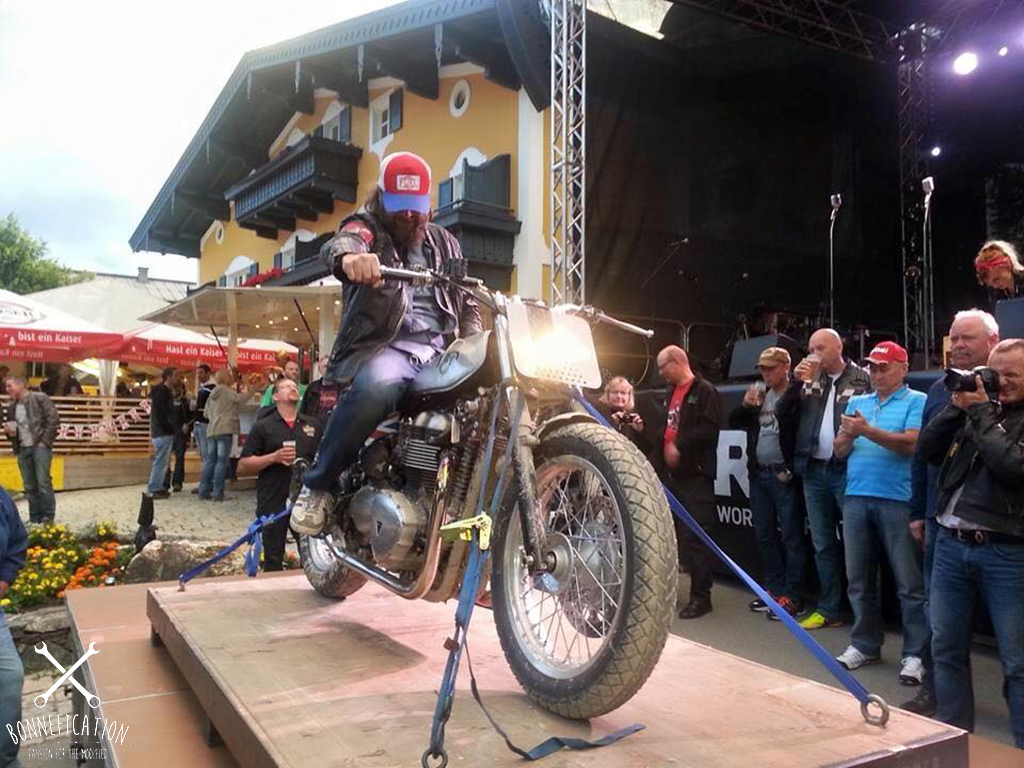 Each year the founder and organiser Uli Bree commissions a bike which will be unveiled and raced at the show. This year it was Karles Vives of Fuel Motorcycles,  Barcelona who had that honour. This year also marked Tridays 10th anniversary and to mark the occasion Karles named his build ‘TriTen’… note thats not TriTon…. ‘Tri’ for the three days of Tri Days and ‘Ten‘  to mark the event anniversary. 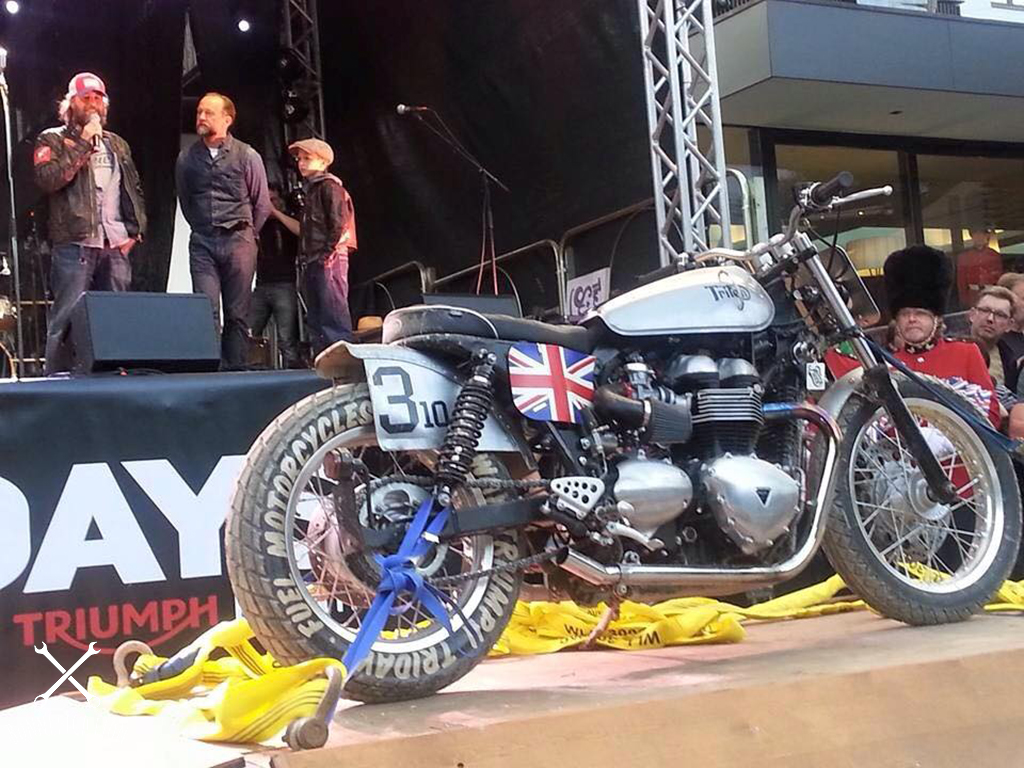 The donor bike for the ‘TriTen’ was a 2014 EFI Thruxton and a build which is clearly inspired by Speedway bikes with their small tanks and enclosed rear mudguard, a style which is perhaps appropriate considering what the bike needed to do after its unveiling.

One of the key modification was to find and adapt a smaller tank to fit the Triumph frame, no small thing considering that the original tank contain the fuel pump for the EFI system. A tank from a humble Suzuki Van Van was chosen as a replacement, with the OEM fuel pump being swopped out for a smaller item and relocated to the now empty space where the air & battery box once lived. Replacing the tank on the EFI also brought up another technical issue, Karles wasn’t able to fit the original fuel sensor back into the Van Van tank. An idea was hit upon to go for an oldskool approach and fit a reserve sight tube to right hand side of the tank. 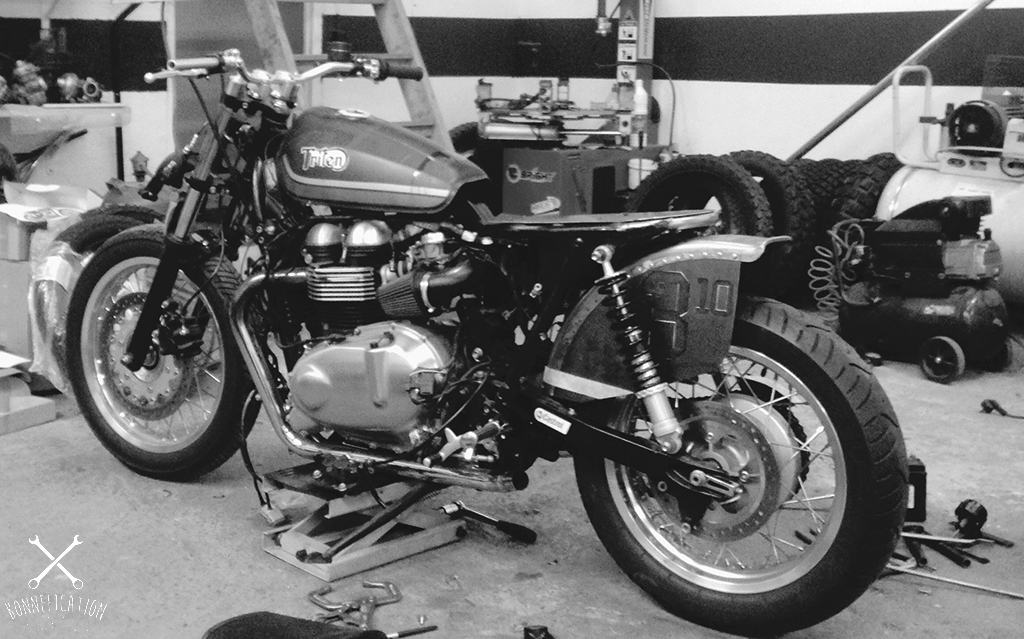 Adding to the ‘TriTen‘ Speedway look are custom alloy side covers featuring the Union Jack, a shortened frame, single seat and of course a very cool shrouded and industrial looking alloy rear mudguard, which has been polished and clear coated to match the Van Van fuel tank.

At the other end of the bike the oversized and bloated gauges are gone being replaced with the Motogadget Tiny, which has been mounted to the frame behind the top yoke, a conversion made possible by the Motogadget m-TRI, CAN-Bus adapter. Other goodies from Motogadget include their compact m-Switches  which were wired-in by the guys at Solo Triumph Barcelona and fitted to an LSL handlebar which also sport an upgraded brake master cylinder and a Tommaselli throttle. 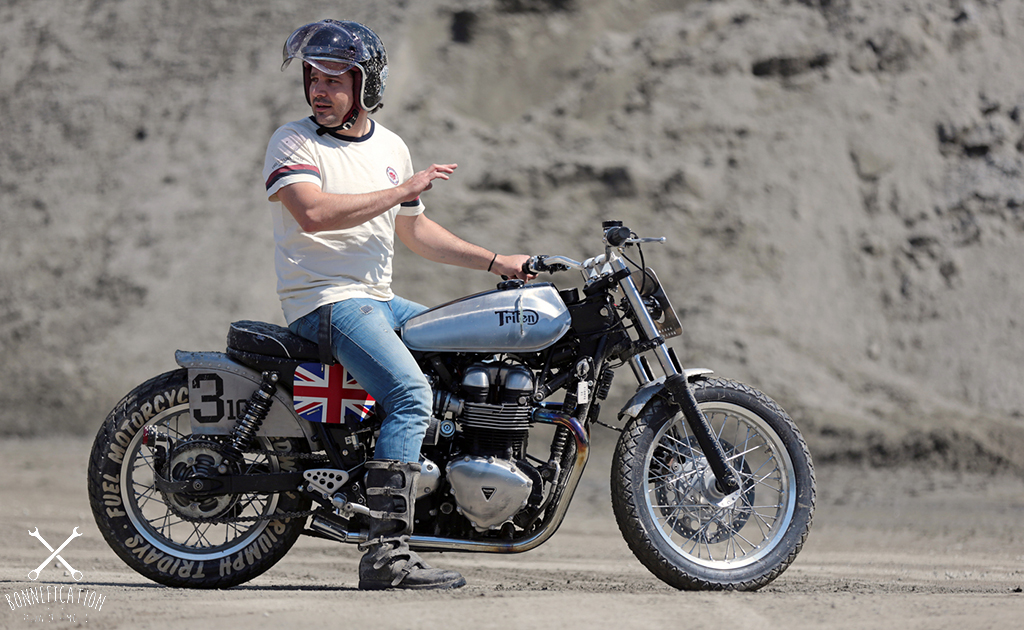 Speedway bikes generally don’t run with lights, so the stock headlight has been replaced with the Free Spirits number board light, which fits in perfectly with the rest of the TriTen raw finish. With the tail light being mounted to the righthand side of the swing arm. Other products from the Italian aftermarket accessory manufacturers include their ignition relocation bracket and High Flow air cleaner kit. Which, paired with a re-map and cut, open pipes should give this Thruxton a little bit more go when it races up that TriDays dirt track. The TriTen has also been lowered using shorter Hagon Nitro’s at the back with the front being dropped though the yokes.

There is one other feature about the TriTen I really like and that is the rear Bridgestone Trail Wing tire which sports ‘Fuel Motorcycles  • Triumph Tridays’ in cool retro typography, a detail which was done by Brusco, an artist from Barcelona. A tire which would look great on the wall in the office. 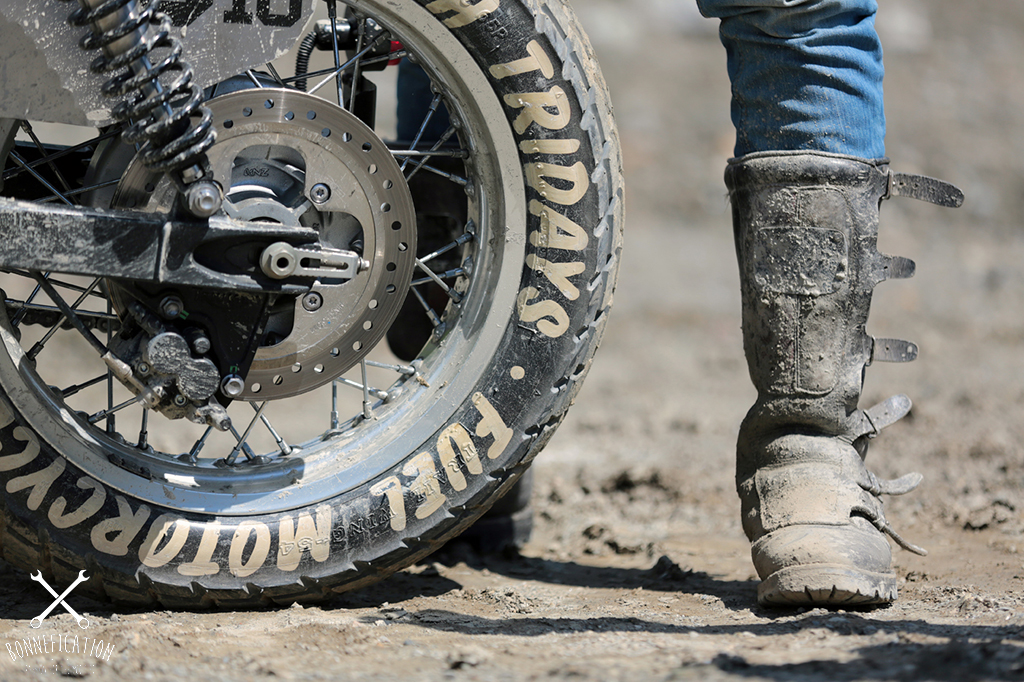