Many of us are familiar with the names Don & Derek Rickman of Rickman Motorcycles, Hall of Fame members finding success in motocross racing of the 50’s and 60’s, who later went on to produce distinctive 4130 chrome moly nickel plated race and motocross frames, especially popular with road and desert racers in America, including Hollywood star Steve McQueen 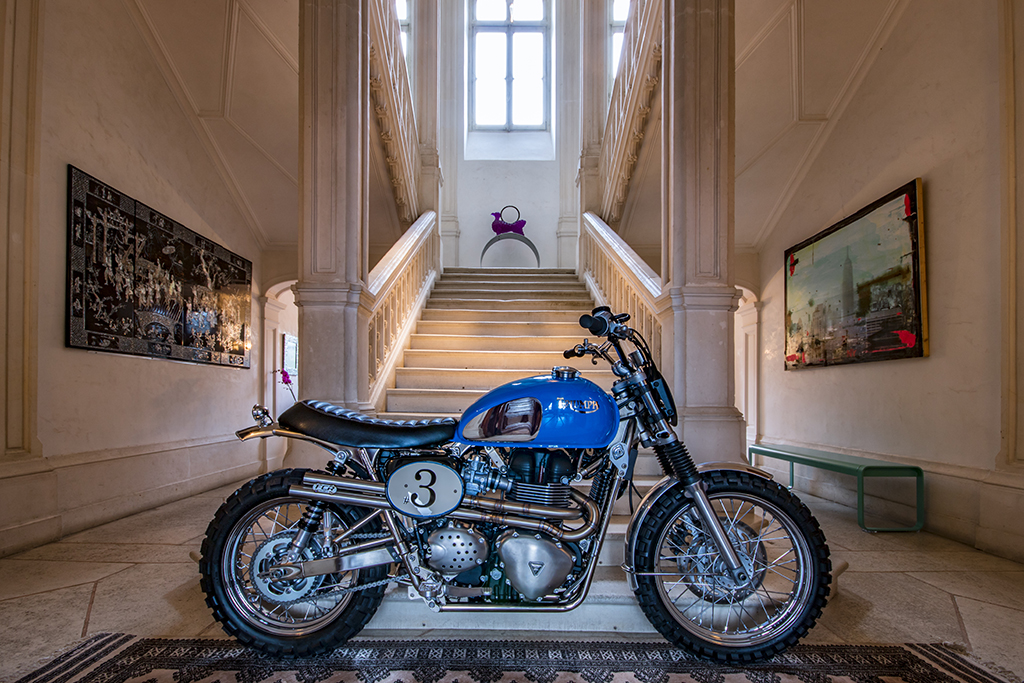 The original Rickman Motorcycles factory, which was just a short ride from the Bonnefication Shop is long gone, but both the Rickman and Métisse names still continue to this day, though separately and no longer in the hands of the Rickman brothers. 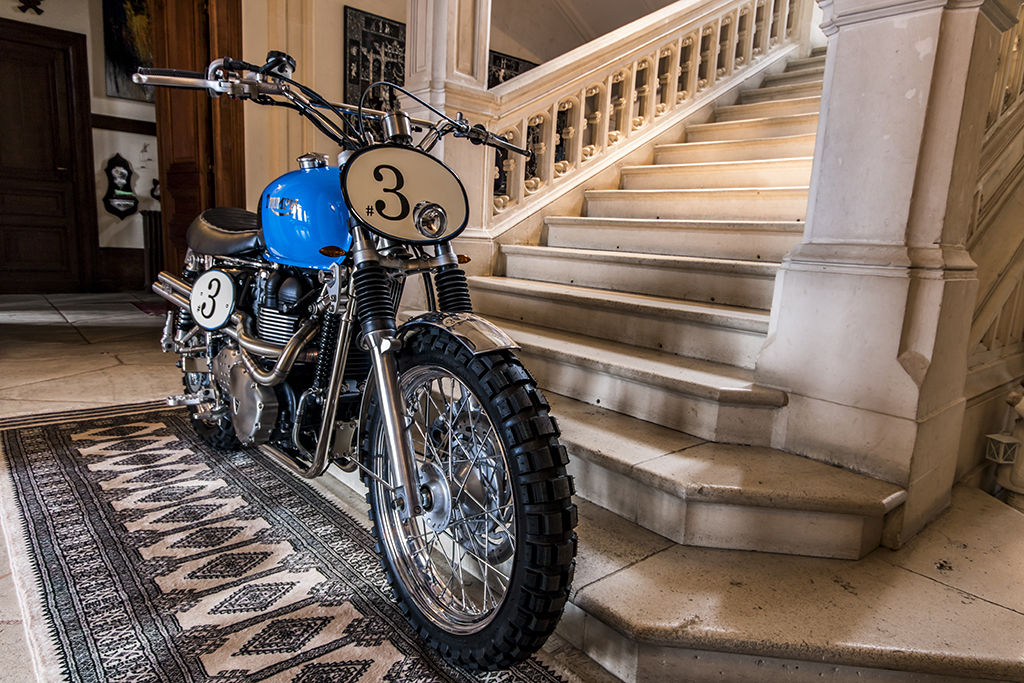 But both companies do still produce the signature nickel plated frames, with Métisse Motorcycles focusing on modern trends; producing amongst other things a beautiful McQueen Métisse replica, while Rickman Motorcycle stuck to its roots, producing frame and kits for twin-shock motocross racing. 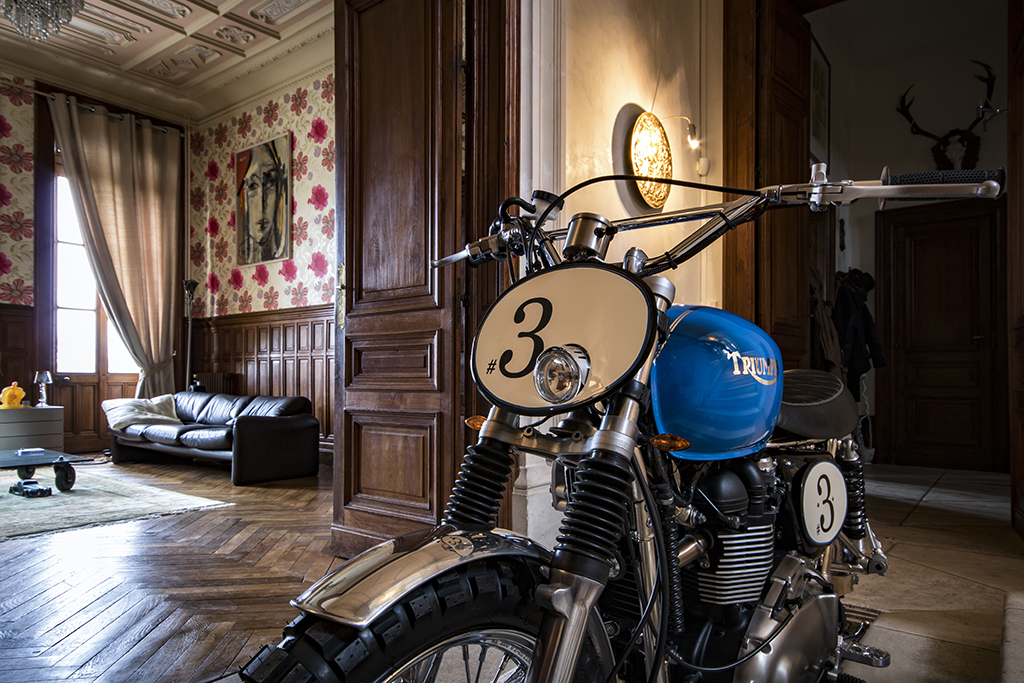 The Rickman name is also very much alive within the Hinckley Triumph Twin custom scene, a scene continually searching Triumphs rich heritage and past glories for inspiration. It was the Rickman name and the motorcycles of the 1970 International Six Day Enduro that was to inspire Sébastien Guillemot and Mathieu Ménard of FCR Original to build their latest Triumph Twin. 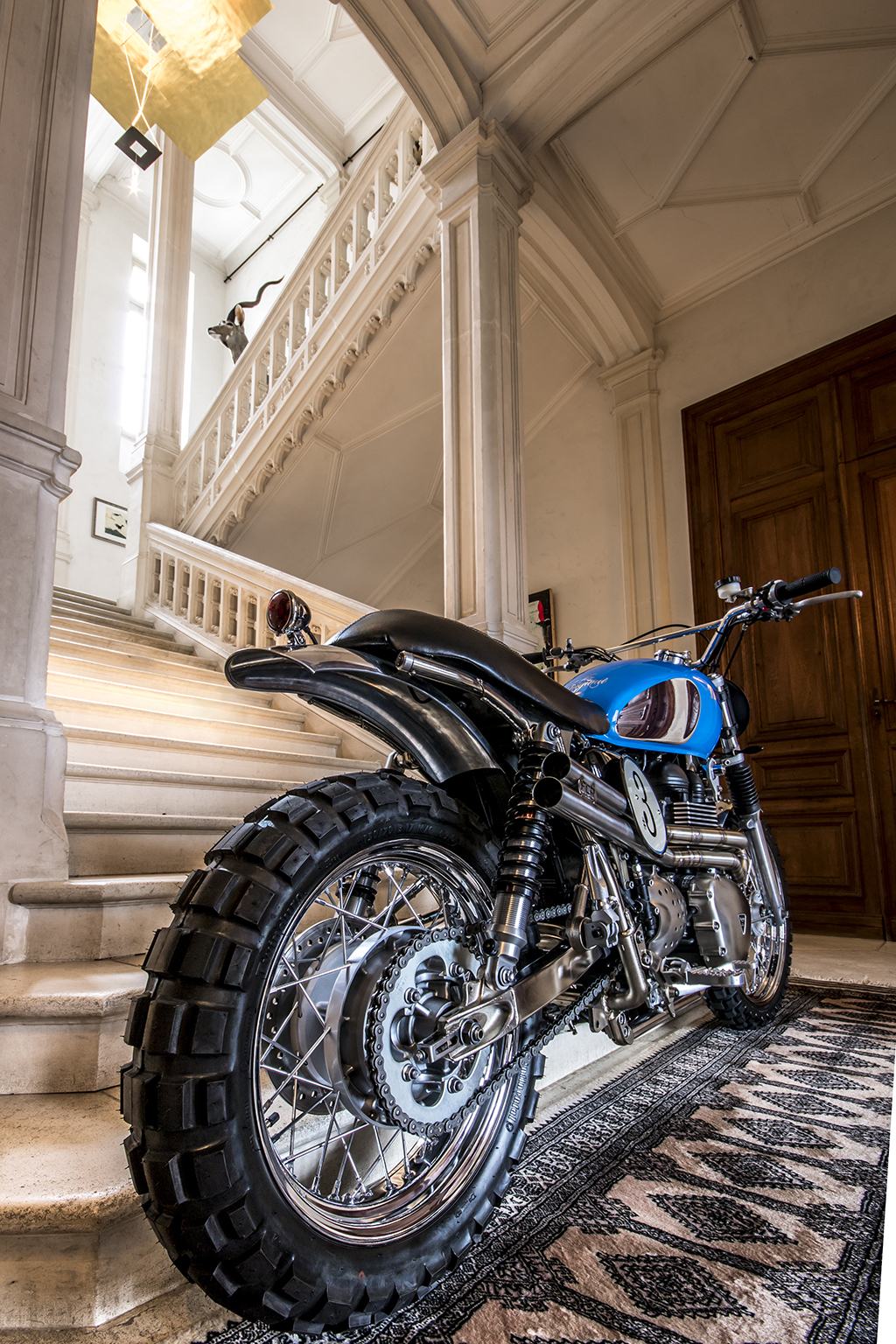 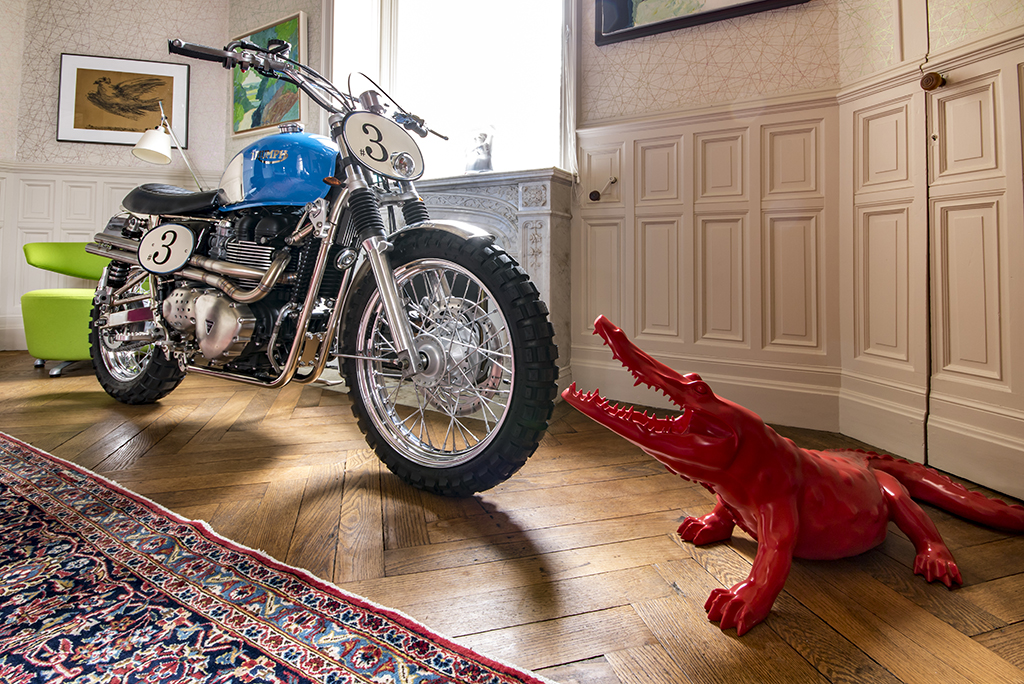 To start; the bike was stripped to its core components, carefully disassembled to ensure the umpteen plastic clips were not damaged. Unlike the many cut and looped customs we feature here on Bonnefication, the FCR build has simply been cut – a great alternative easily done by the shed builder, all you need is a cutting disc on that angle grinder, and the guts to cut. 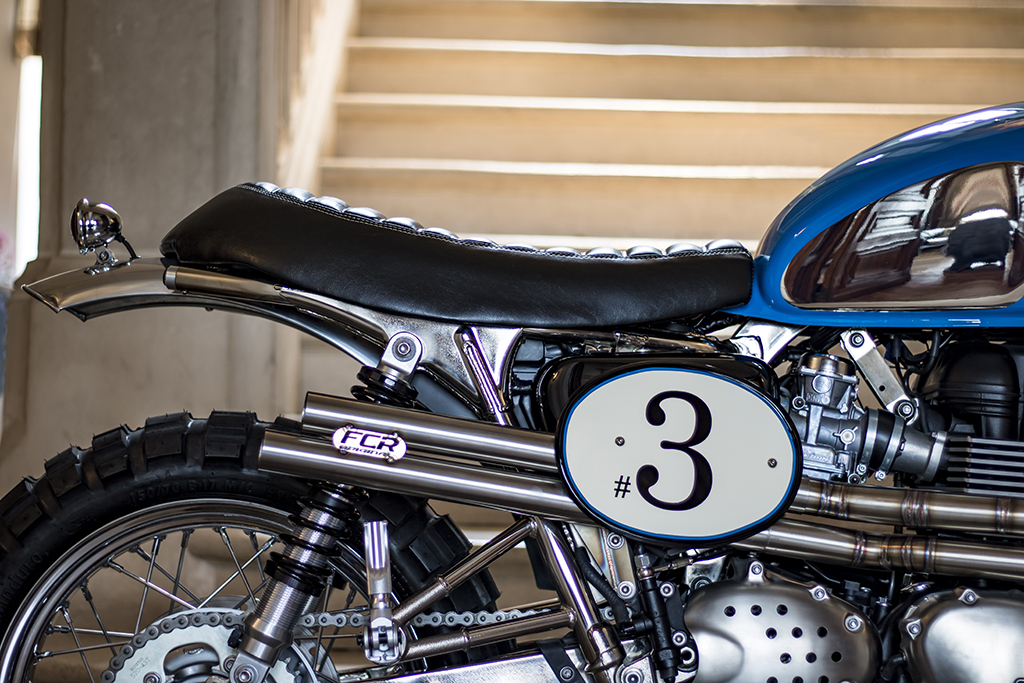 The now shortened frame, engine cradles, swing-arm and engine brackets were then sent off for ‘Rickman’ inspired nickel plating. Something which would cost you in the region of £700 to £800 here in the UK. Far more expensive than paint or powder, and you would also need to factor in the cost of replacing any bearings (same as powder), but the end result is pretty stunning. 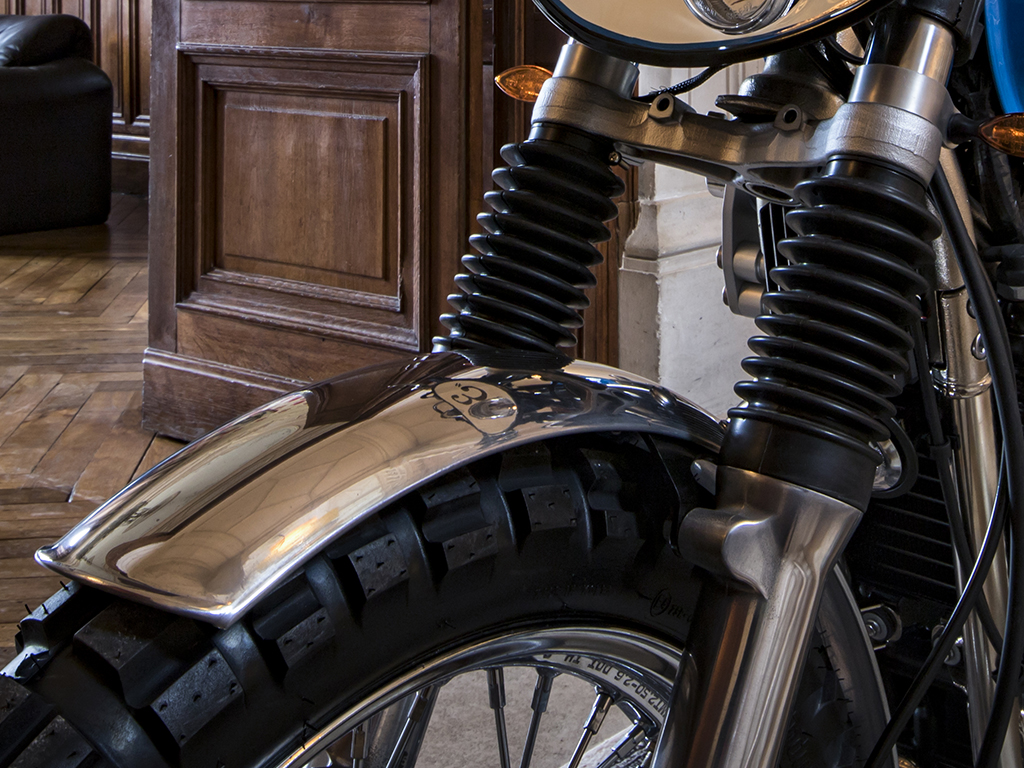 Once the newly nickel plated frame was back in the FCR workshop, it was reunited with its 865cc air cooled engine, electrics, stock air/battery-box and forks. Forks which had been stripped of paint and polished before bing fitted with contrasting black gators. 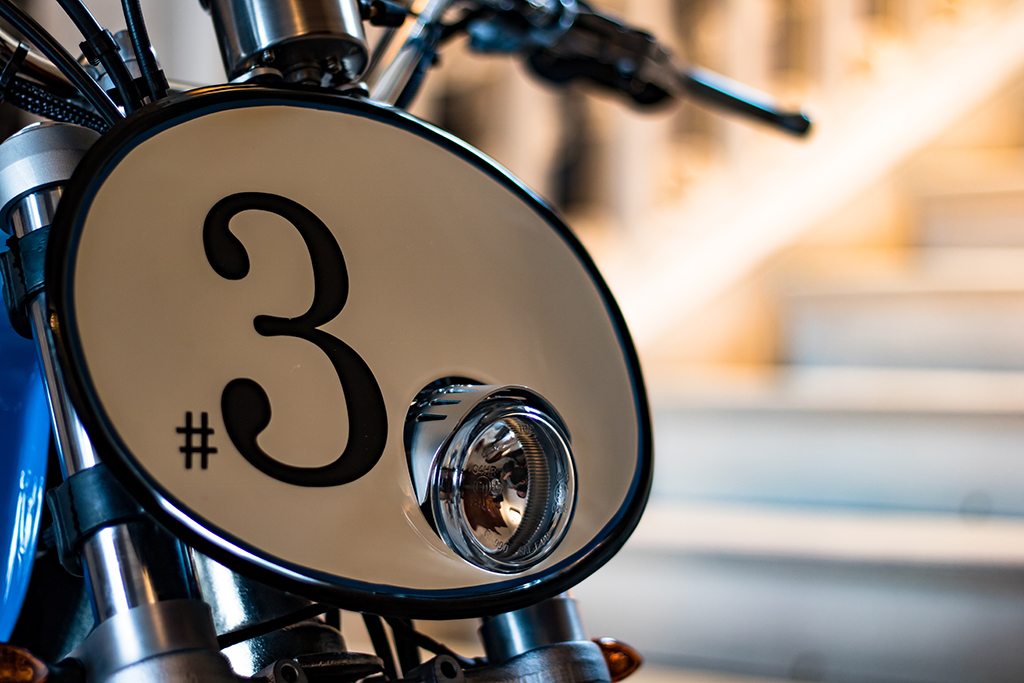 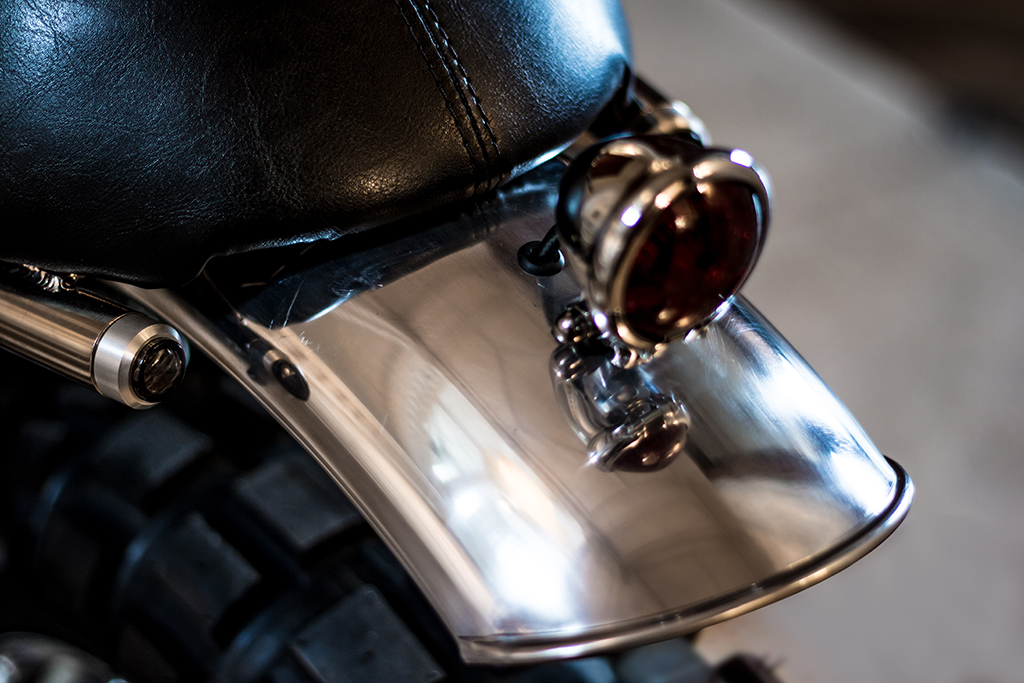 With the chopping of the frame, a shorter and more attractive aluminium mudguard was fitted to the rear , topped off with a Bates style L.E.D tail light, either side of which are L.E.D turn signals inserted into the shortened frame tubes – these lead us on to the upgraded rear shocks and a custom made leather seat upholstered in black leather. 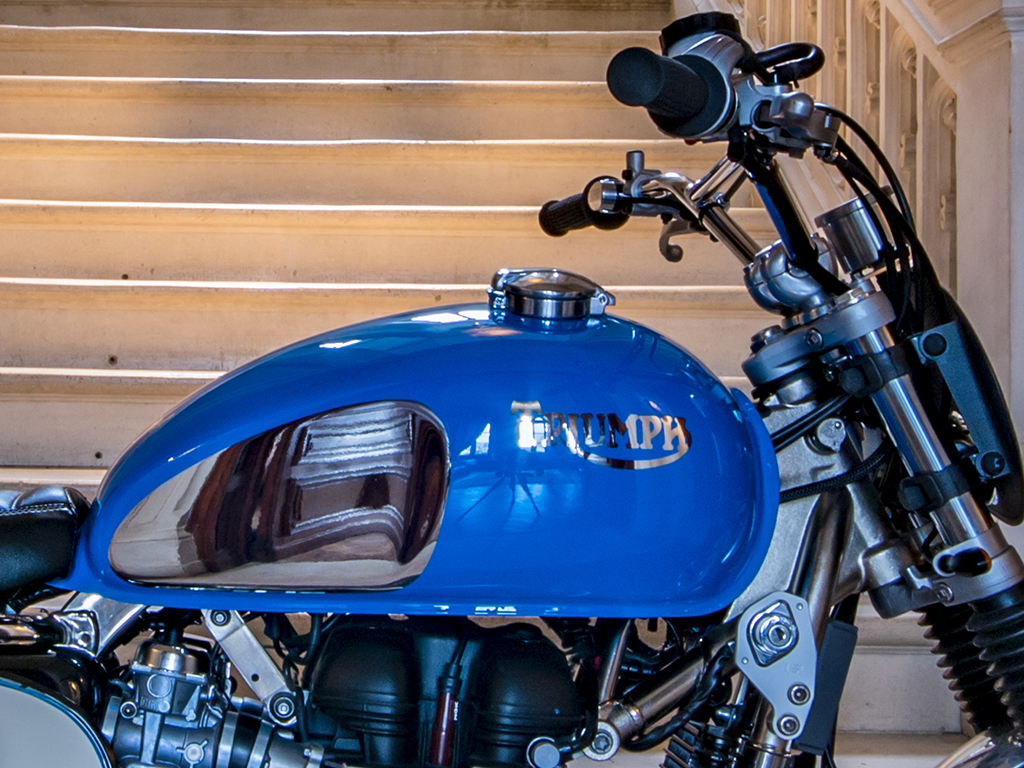 The tank may look as if it were made of lightweight aluminium, perfect for a dirt bike, but in facts its the stock item chrome plated, something else I looked into, being quoted prices in the region of £350. The tank was then painted in house in a very French racing blue and topped off with a Monza style petrol cap.

High pipes on a Scrambler are a must, and whats better than a set of 2>2, Bud Ekins style desert racing high pipes… no, I can’t think of anything. Though I would recommend a heat shield as from experience naked pipes will make a mess of your trousers and your legs, Ouch! 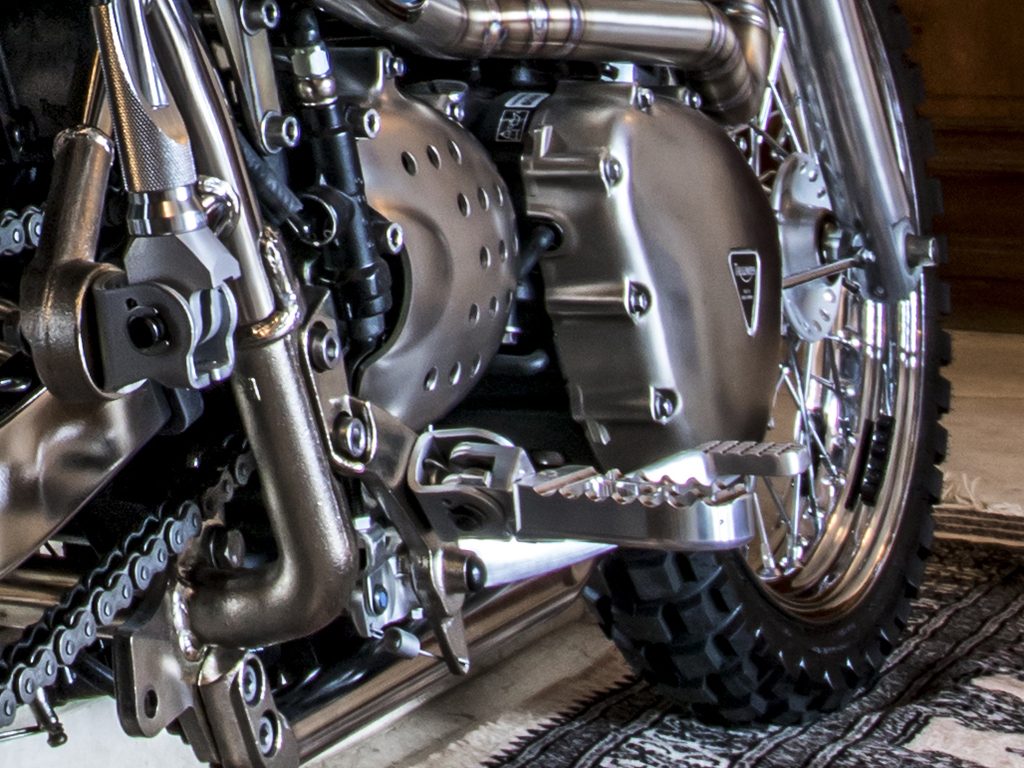 Keeping with this Triumph’s ISDT off-road theme, the stock front and rear pegs have been ditched in favour of Joker Machines CnC’d Long serrated foot pegs, with the chrome 19″ and 17 inch wire wheels being fitted with a set of Continental TKC80 dual sport tires, allowing the rider of this particular Triumph Scrambler to blast along their local back roads with confidence. Other details on this FCR build include the usual ignition and rectifier relocation brackets, and a drilled sprocket cover adding a little detail to the engine. 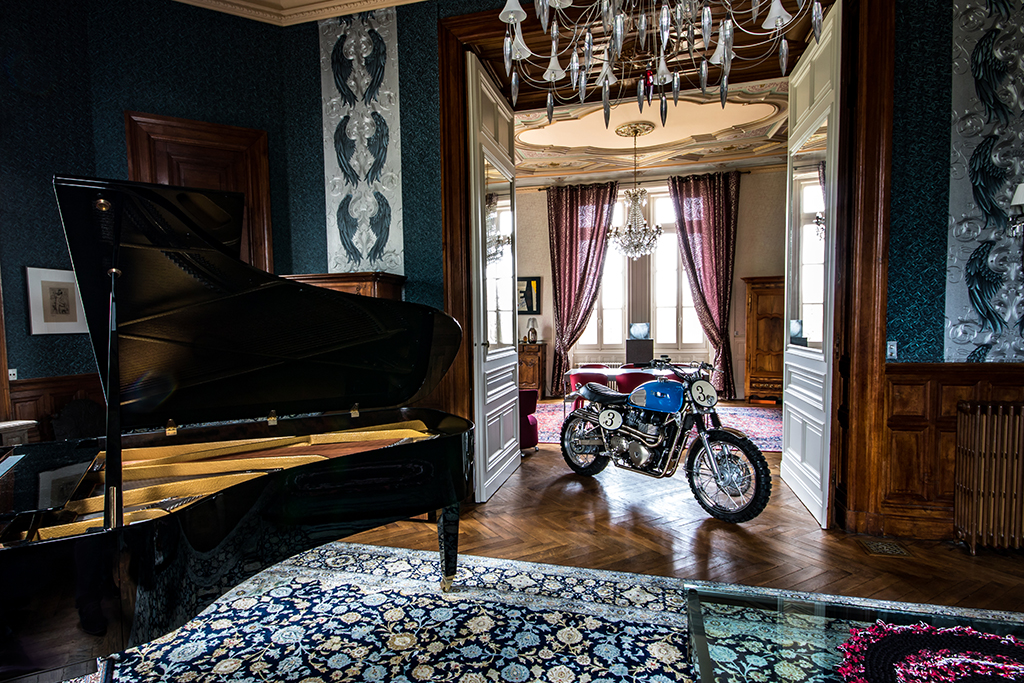