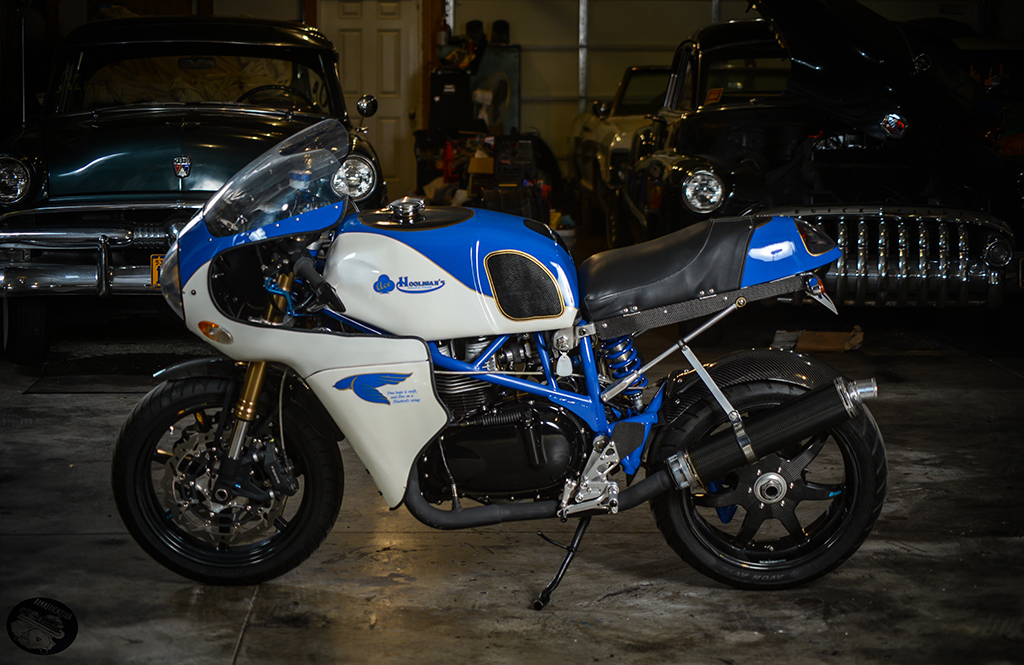 I am expecting a mixed response from the Hinckley Triumph enthusiast to the Bluebird by Farley and Ace, Inc. For me, the Bluebird is one of the most beautifully accomplished Triumph Twins I have seen grace these pages (the other being White Collar Bike – Bhaskara) both builds are based around the excellent Hinckley Triumph engine, rather than a bike as a whole. On both occasions the builder has created something truly extraordinary. 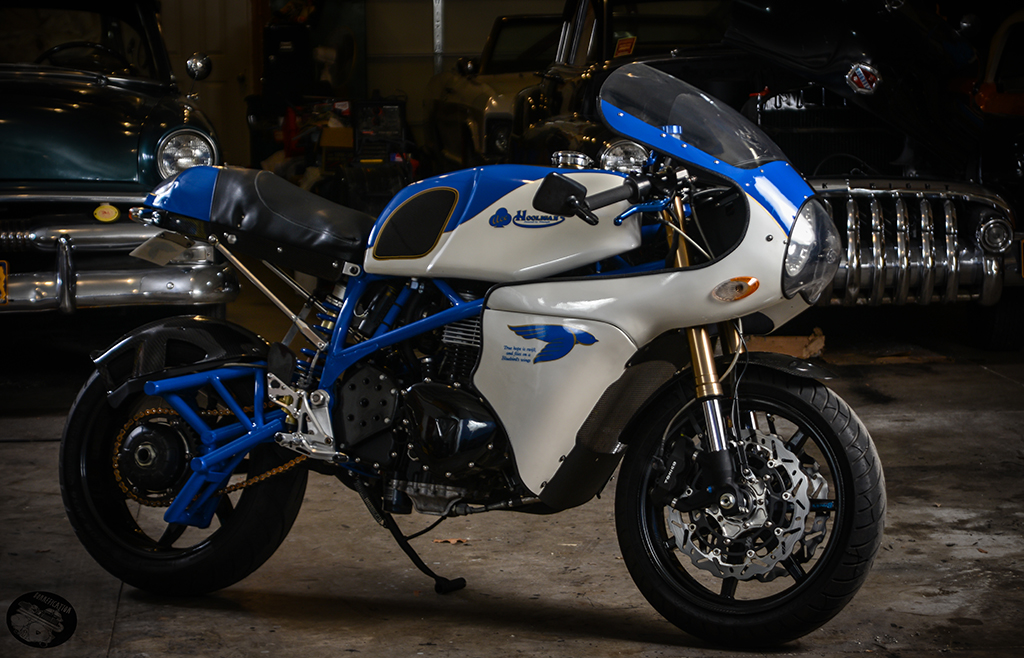 So why do I expect a mixed response to this particular modified Triumph Twin, considering just how good it is?, well, from experience, many will say, ‘it looks to modern’, ‘it doesn’t look like a Bonne’ etc. When I posted a teaser image on the Bonnefication Facebook page, it received just thirty-five likes (at the time of writing), am I surprised, not at all. 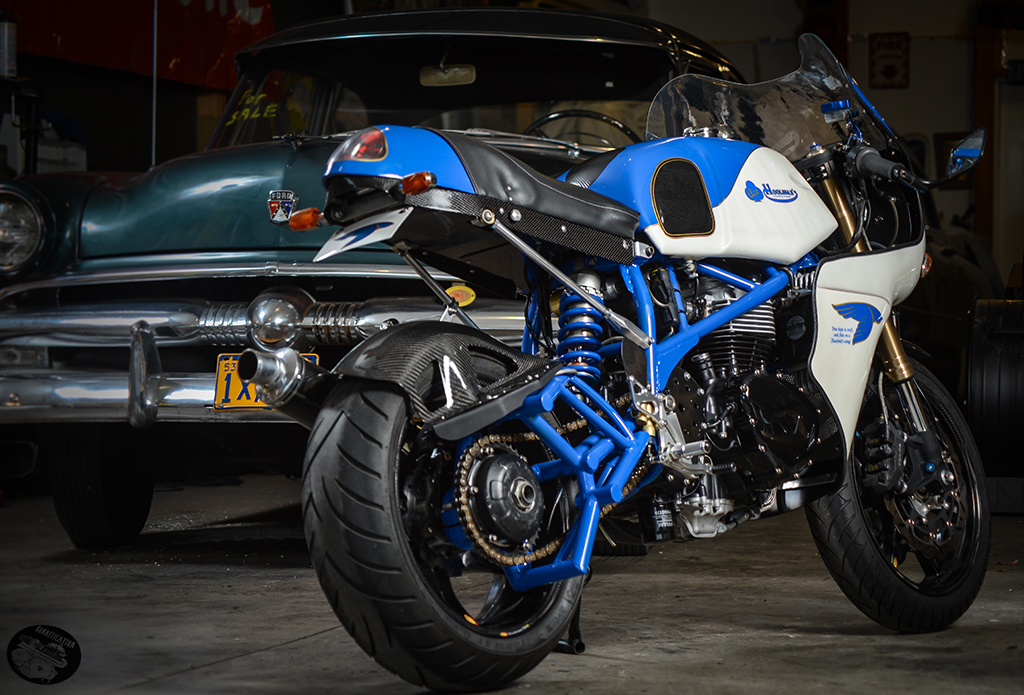 But if you look back four or fives decades, to the Racing Triumph Tridents, bikes that could easily be the Bluebird’s predecessor, bikes which also ‘don’t look like a Bonnies’. So why is this style of bike not as popular as the trendy desert sled? (a style close to my own heart) are fairings that uncool?, are they the exclusive reserve of retro Ducati’s?  – Shame if they are, as believe fairings will be back, I feel they will be the next thing, and those that took them off will be desperately digging them out from where ever it is they stored them, unless thats the tip. Love it or hate it, there is no mistaking the level of skill that has gone into this particular Triumph Twin build, and that is what Bonnefication is all about! Peter Ouellette the builder continues…

First let me tell Bonnefication readers a little history about me and Farley and Ace. Farley and Ace was started as a result of my wanting a fairing for my 2004 Triumph Thruxton. The Avon Lynx style fairing I bought for the bike seemed just too small for the modern classic. It was sized for an older Bonneville 650. The other thing that occurred to me was that putting a fairing together for the bike was a lot of work… the shell had to be purchased form one source, the windscreen and nosecone from another and you were basically on your own for all the necessary hardware. I thought I could put it together, and make a kit for other owners who might be interested in putting a fairing on their bikes. Ace Hooligan’s (my brand) and Farley and Ace were born. The business moved on from there into several other products, doing mechanical work, modifications on other bikes and a few customs here and there. 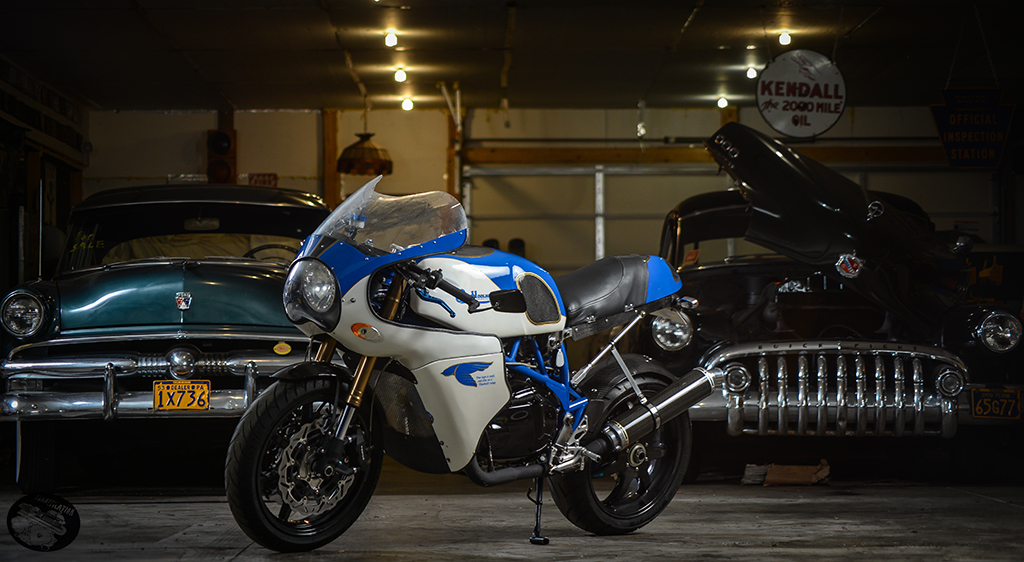 There is no us, only me, working out of the basement. I had rented a shop space for a while, but I didn’t not want to pay the overheads, especially for the low volume of specialised business I was doing. The concept for the Bluebird rattled around in my head for quite some time. During the eighties, I built custom bicycles, preferring to use Reynolds 531 and 753 tubing . That work made me familiar with two wheel vehicle geometry, and how to manipulate certain aspects of the geometry to achieve desired handling and ride characteristics.

What started to make the dream a reality was trading an 2006 Triumph Bonneville motor for some work on a customer’s motorcycle. I made some enquiries to Reynolds in Birmingham about motorcycle tubing, and they remembered me from my bicycle building days (!) and confirmed that they were indeed making Reynolds 631 specifically for motorcycle chassis.The project moved forward, as something I would pursue in my spare time, between projects. I built it for me, as a rolling advertisement. It was never intended to be a show only bike, but as a practical everyday rider, that would showcase some possibilities for customers. The bike does get ridden, nearly everyday. 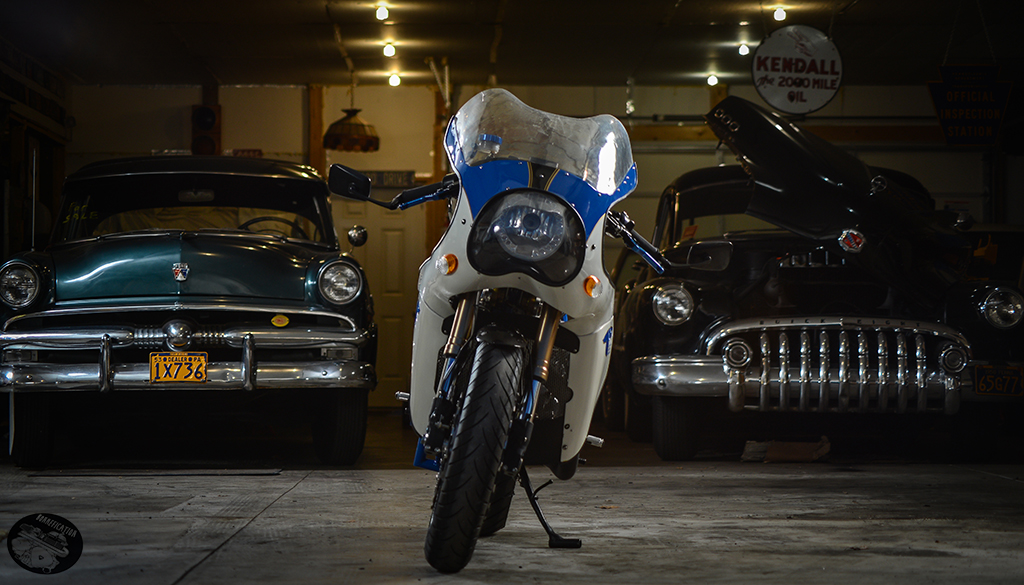 I started sourcing parts, BST carbon wheels, Avon Storm II tires, a Suzuki GSXR front end, hand controls, a Triumph Sprint ST single side swinging arm, and various other bits and pieces for the build. The geometry was laid out on a drafting board (my cad skills are kinda’ sketchy). My early experience with the new motorcycle tubing convinced me that bending the tubing for me would be a problem, so my design drawings were modified to utilize mostly straight sections of tubing. Initially, I was going to adapt the entire Sprint swinging arm into the bike, but it became obvious that building my own swinging arm would be more satisfying.

I built fixtures for welding sub-assemblies for the frame, and used the engine as part of the fixturing. The wêlding process was painstaking, making partial welds, allowing them to cool, checking alignment, moving on to another area, etc. This process assured a very well aligned chassis, that required no “cold setting,” which I do not think would be possible in any case… the frame is very strong.

A large majority of the parts were made by myself, as well. All the body work, fairing, fenders, tank, seat shell, dashboard were fabricated from carbon fiber in house. The tank is welded sheet steel with a foam and carbon shell. Mounting brackets for rear set controls, 2 into 1 exhaust header, and most of the other hardware were fabricated in house. The bike uses a small all-in-one instrument pod, an air fuel meter and a start button on the dash. There is a toggle switch to activate a fan mounted to the oil cooler. 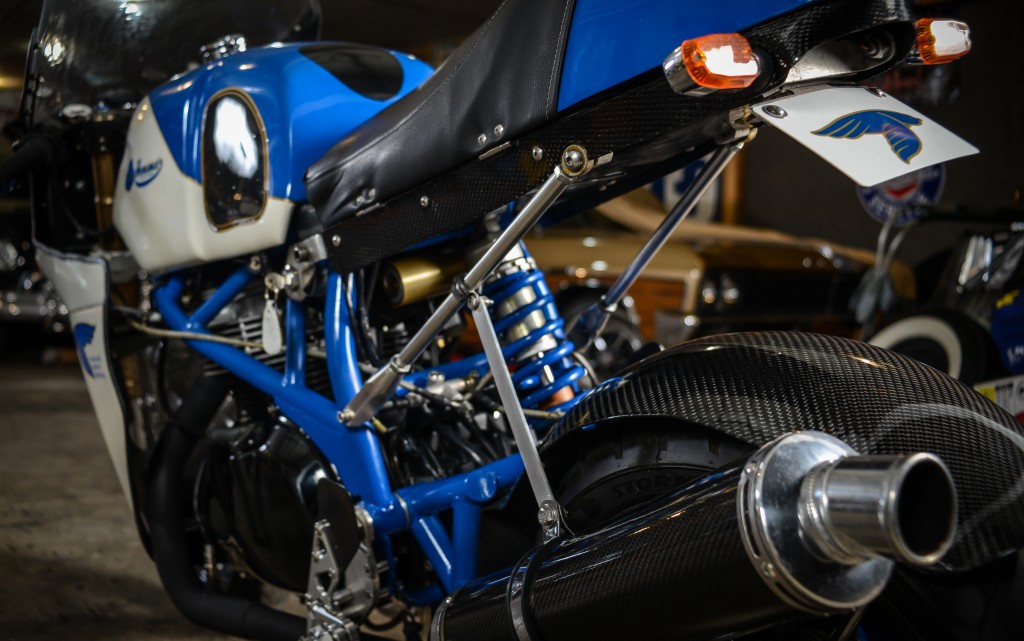 Engine work was limited to porting the head, upgrading the ignition system, and fitting a pair of 38mm APT single circuit “Smartcarbs.” The bike is also equipped with a Scott Oiler (a great product, seldom used in the states). Brake rotors and pads are by Braking,spa. 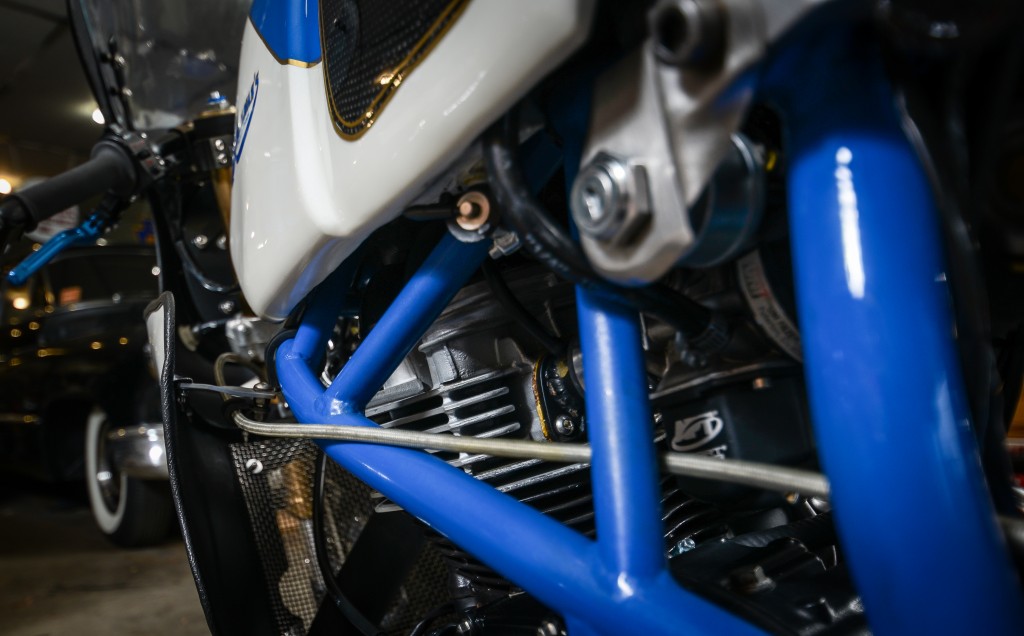 The bike is short and stout, with a good compromise for handling and stability. Weight comes in at 405lbs wet. I find it very well balanced, at ease loafing around town and to speeds in excess of 120 mph (still has legs at that speed, but I don’t need to find its terminal velocity). There is no twisting in the frame that I can determine. That was part of the original concept; the frame spars have triangulated bracing both on the sides and the top. The front frame is a truss from which the engine effectively hangs. The swinging arm is not particularly elegant, but it works as intended. It is sprung with a Ducati gas charged monoshock, with a higher rate spring to compensate for the placement of the pivot points. The bike is strictly solo, but can be easily equipped with touring luggage, and is a superb light touring ride. 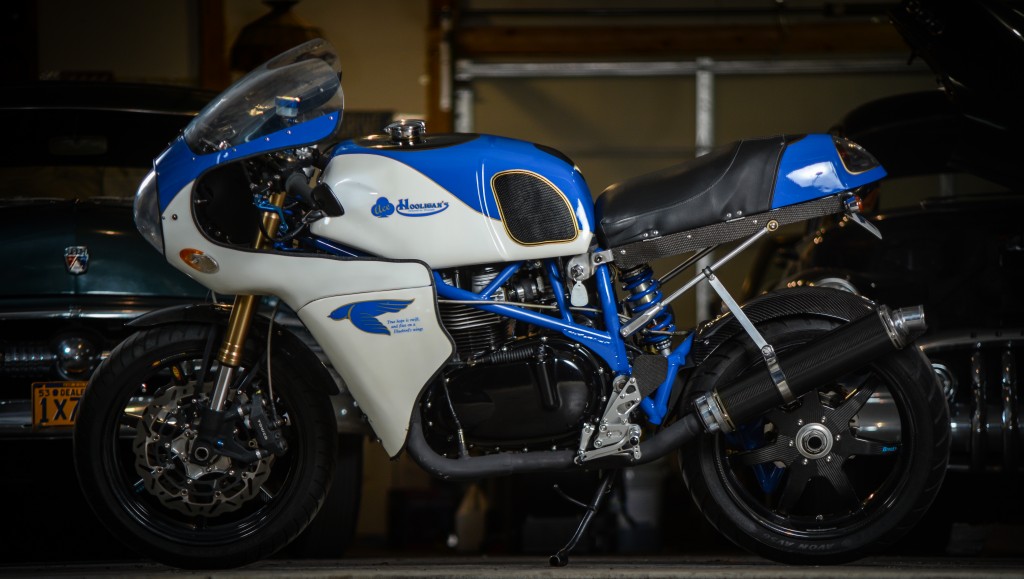 If you, like me, think this bikes is the dogs nuts, then you can buy your very own Bluebird, just give Peter “Ace Hooligan” Ouellette, of  Farley and Ace, Inc a call.

Peter “Ace Hooligan” Ouellette
Farley and Ace, Inc.
Pittston, PA  18640 USA
www.farleyandace.com
570 313 0113
We use cookies on our website to give you the most relevant experience by remembering your preferences and repeat visits. By clicking “Accept”, you consent to the use of ALL the cookies.
Cookie settingsACCEPT
Manage consent