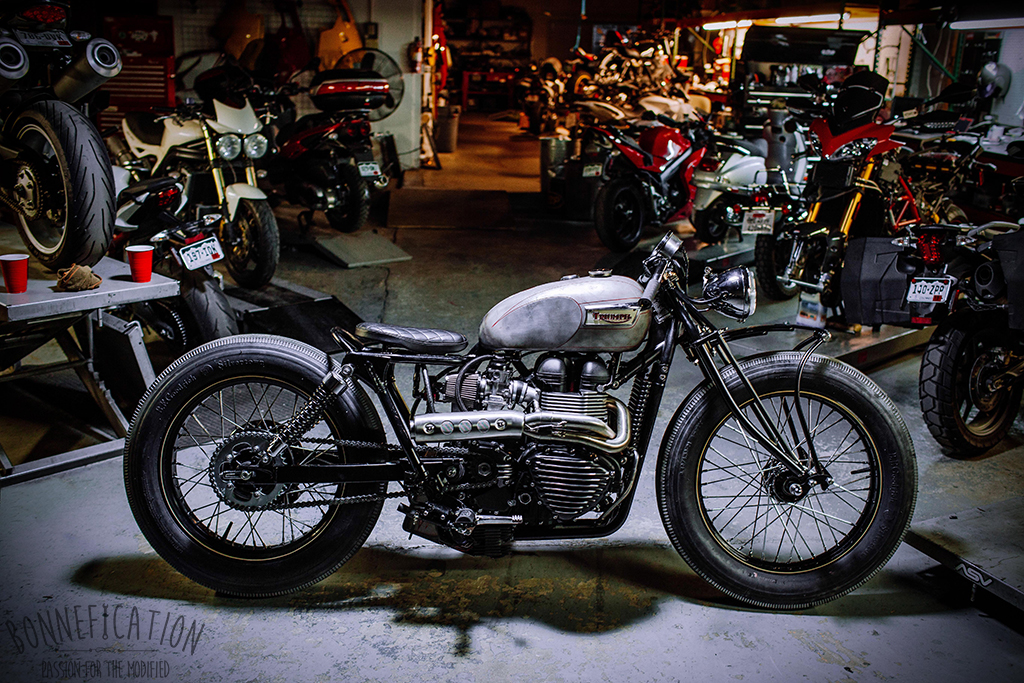 On occasion a custom Triumph Twin will be revealed which will have the ‘WoW’ factor.  It will be a Triumph Twin which has all the right mods, in all the right places. A build that may not be ground breaking, or truly original, but a it will be a  bike that many will love, copy, and want to own.  Then, on rare occasions there are the bikes that actually make a few peoples heart leap, it will be a build that is not be to everyones taste, probably a bike which has gone against the grain, perhaps done something different. The latter is the case with ‘The Deadline” from Erico Motorsport of Denver Colarodo, a company which was started by former motorcycle road racer  John Beldock in 1986, and went on to become an official Triumph dealer since 2004. 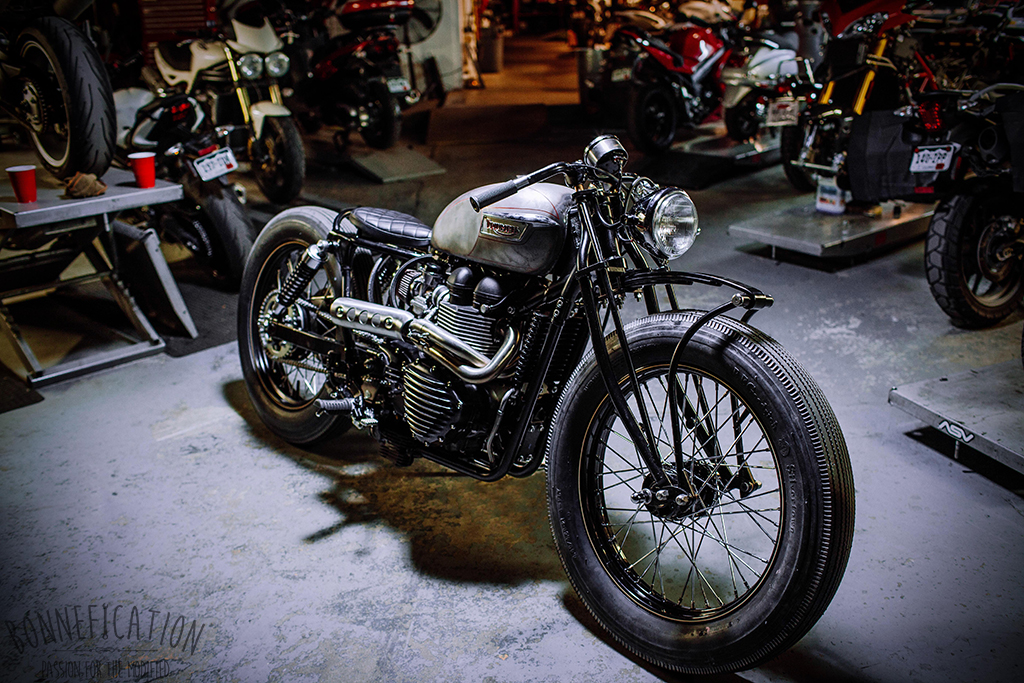 “The Deadline” is one of the sweetest looking machines I’ve seen in a long while. Don’t get me wrong, the bikes we feature on Bonnefication are some finest custom Triumph there are. But this build is a bit different, rather than looking back to the Triumphs of the fifties and sixties, this build looks to Triumph’s of the thirties, but not the vintage ride or reliability. As you can see this 2014 T100 has been on a diet, losing pretty much everything bar the key components. 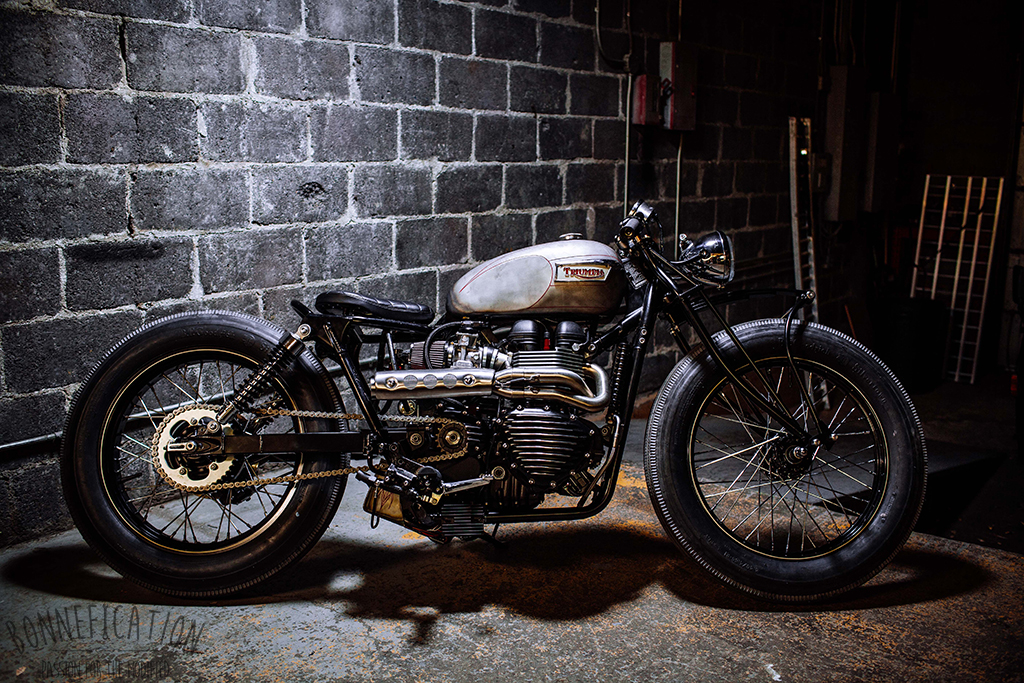 The frame has been drastically shortened right back to the shock mount, and then and a frame loop has been added to round things off. The stock swing-arm has been extended by 3.5″ (89mm) which was necessary to fit the 21″ rear wheel, (built by Woody’s Wheel Works ) which is also wider than stock making it look a lot bigger. The bike was also lowered by 1.5″ This was lost to the huge rims and tires and the bike has more ground clearance than stock. With the lowered seat it all kind of comes together. The exhaust is the Arrow two into one with the mounting brackets removed and no silencer. 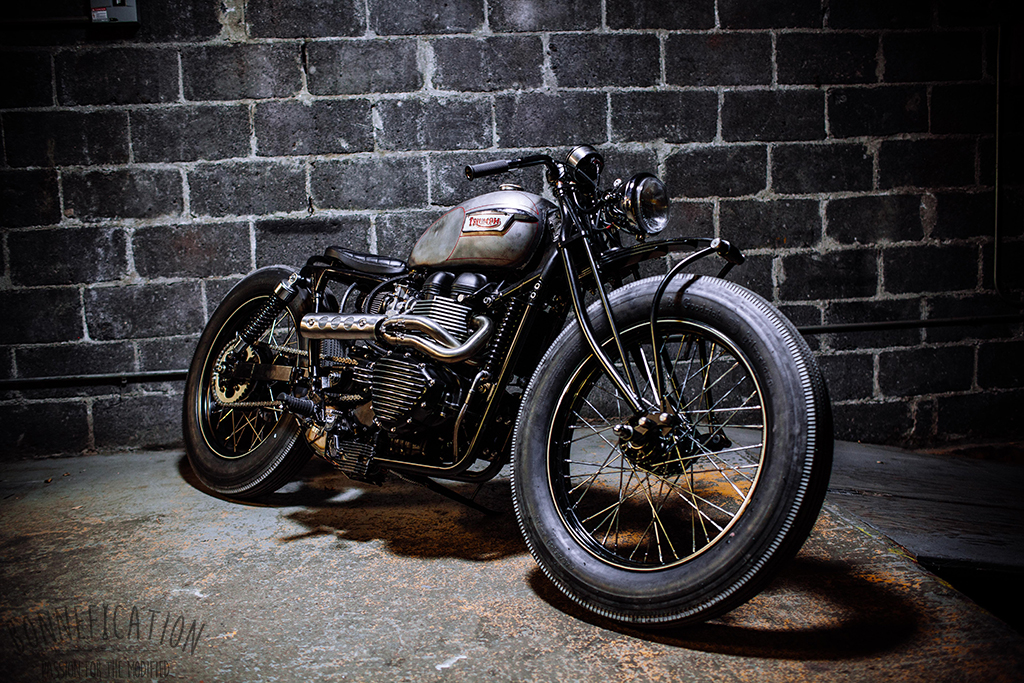 Giving the T100 a vintage feel, and making this bike stand out from the crowd is a 21″ front wheel and Velocity leaf spring forks from VooDoo Vintages of Austin, Texas. These forks give this Triumph and all together different look, that may well be common place on custom HD’s, but are not often seen on Triumphs, which is a mighty shame as they really add to the look of the bike. Tyres which complete the vintage look are Goodrichs.