EB043 is the second modified Triumph to come from the stables of  Queensland based builder Ellaspede. Their other was based on a 2011 Triumph Bonneville and tagged EB019. This machine shares a few of the same aftermarket parts as EB019, but items like that seat and those now very popular saddlebags make this an all together different beast. Im personaly not a fan of the mix of classic tyres use or the heat wrap that seems to dominate the ‘New Wave’ custom scene. As we know, It’s all about personal choice, what a customer wants a customer gets.

There are details worth checking out, such as the leather wrapped cables and the quality of that Kangaroo seat. There are also In my opinion, a few that need fixing. Such as the lack of a Rear Peg Elimination kit, the rectifier and horn could be relocated out of the way, and the stock front indicator mount could be replaced with fork mounted brackets perhaps. All easy fixes if they bothered the owner.

Overall, this bike looks Great! – credit where credit is due to Ellaspede for building it.

Details from Ellaspede
“People drop in to Ellaspede for varying reasons, one of the main ones being (not surprisingly) to talk bikes. Our latest client, Steve S was one of those folk. He was interested in discussing which motorcycle to use as a base for a mild custom build. After some chat, research and box ticking he’d narrowed the possible list of candidates to just a few. 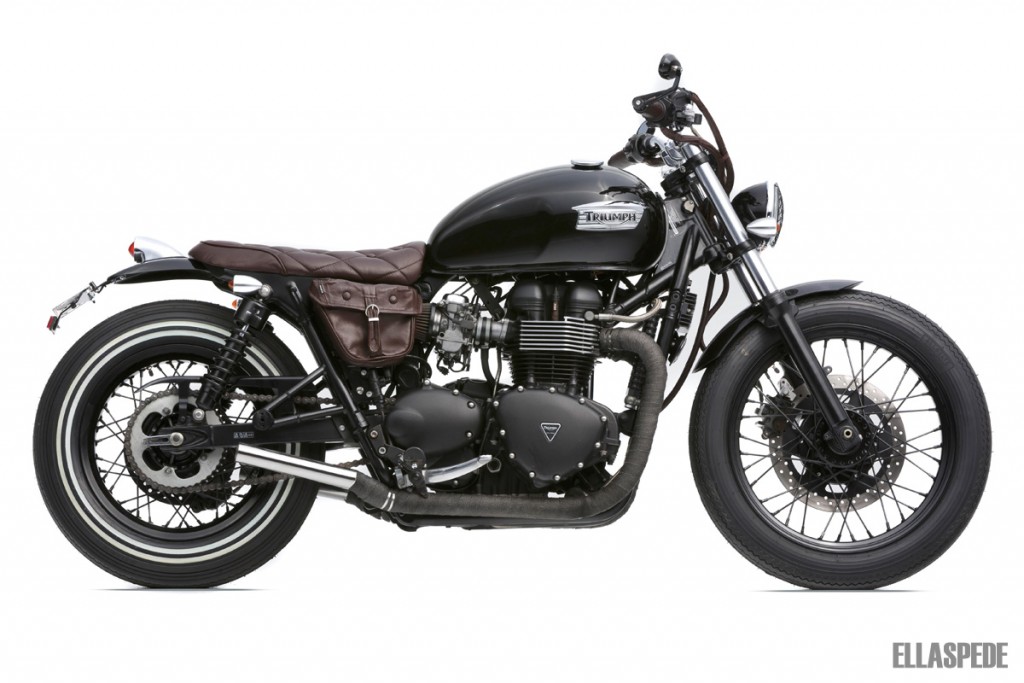 Steve showed up some weeks later with a bike that ticked more boxes than the rest he’d looked at… the ever-popular Triumph Bonneville. This one was an ’07 model, sporting some custom bolt- on items. 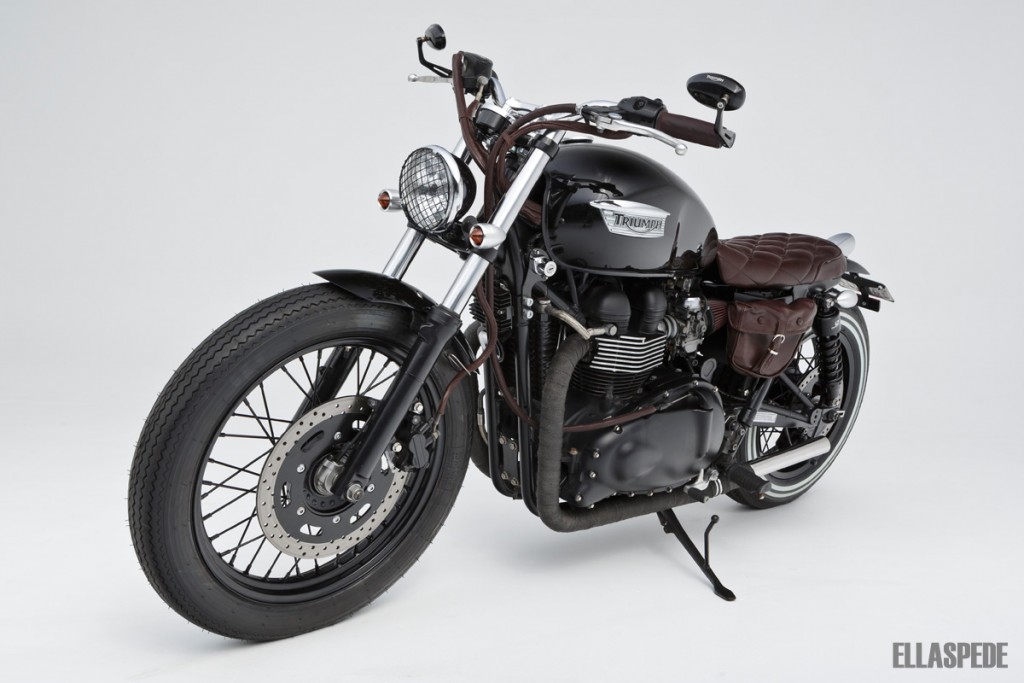 And they’re popular for a reason… they’re a good all-rounder that seem to hold their value pretty well, (here in Australia at least). Of course this also makes the task of customising them that much harder, unless you just want to produce a bike based on some the many after-market goodies available. Steve didn’t want that, so over a few meetings and correspondence we set about designing something to suit his brief. 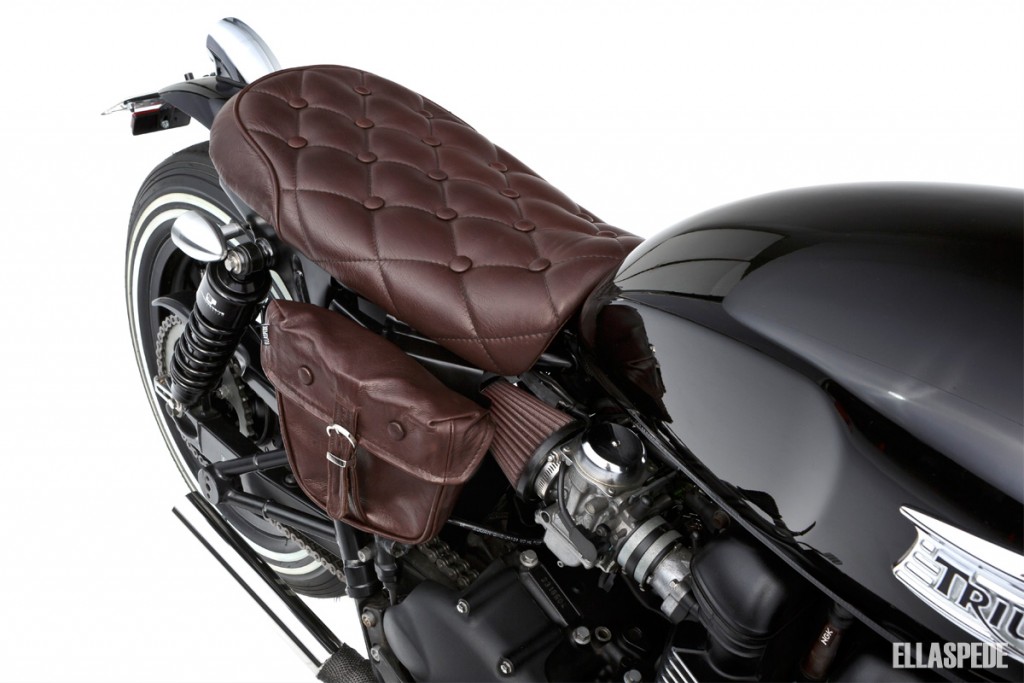 The result, whilst clearly still a Triumph, uses a mix of styles that blend through the use of colour coding and texture, producing a cool classy cruiser… All the C’s!! 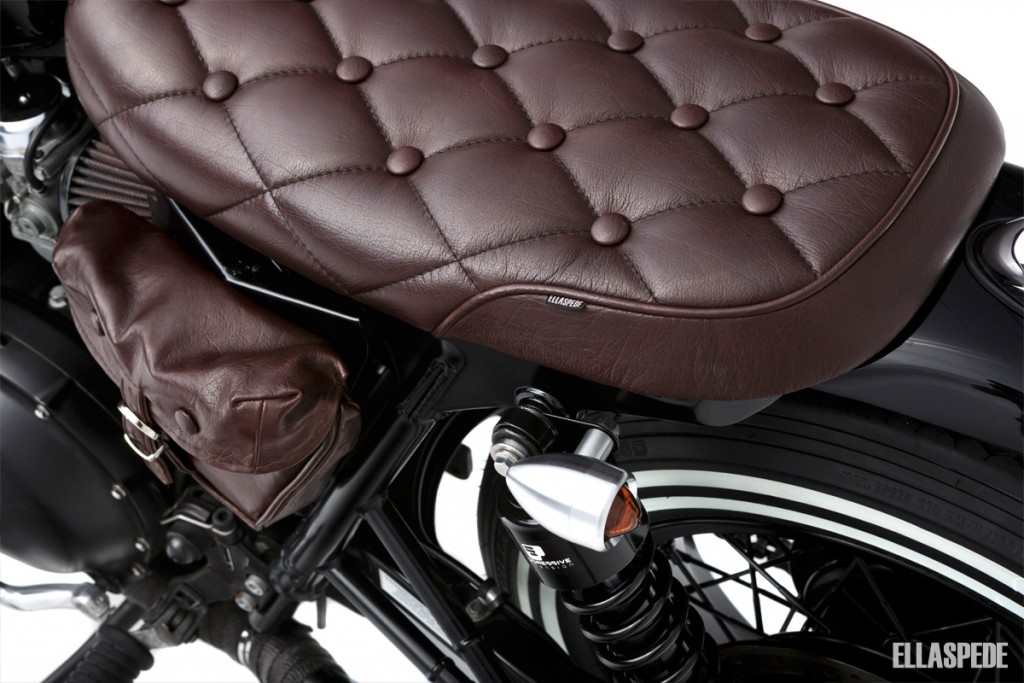 One of Steve’s main requirements was the stance… he wanted it low. The exact height remained a bit of a mystery though until the double stripe Shinko rear tyre was fitted up to the custom 16 x 4.25 rim and a trial fitting took place so we could spec suitable height shocks. 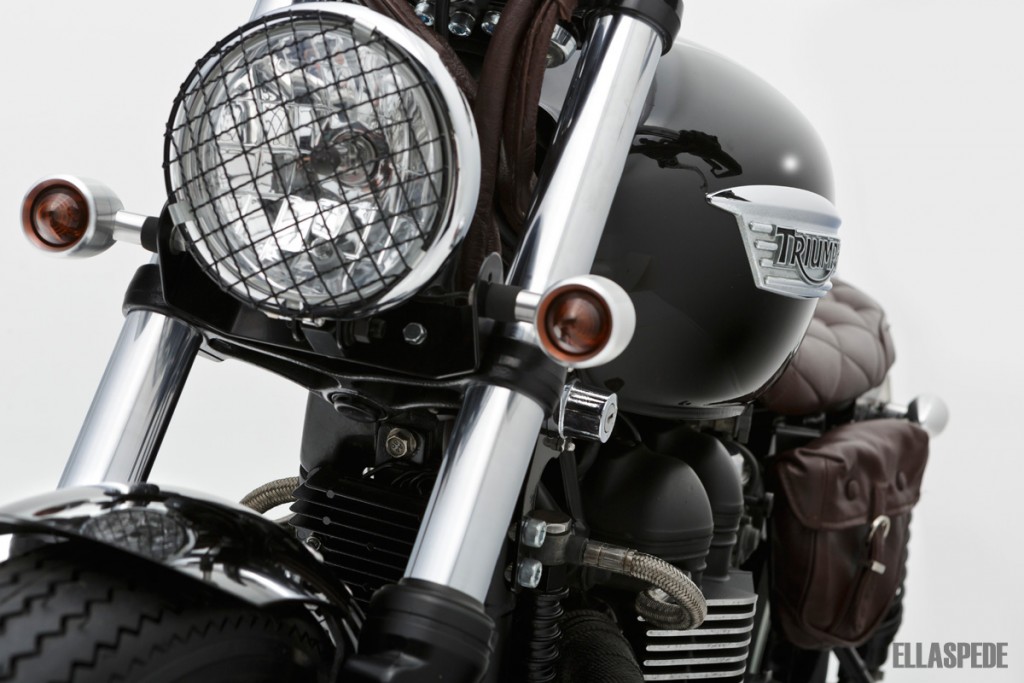 Progressive shocks made for a Harley Sportster (oh, no, Ed) with custom shims and bump stops take care of the rear whilst simple fork protrusion helps at the front to get the height down. Of course there’s a price to pay in the handling department, but Steve convinced us he was aware of this and decided the offset in handling was worth the aesthetic result. 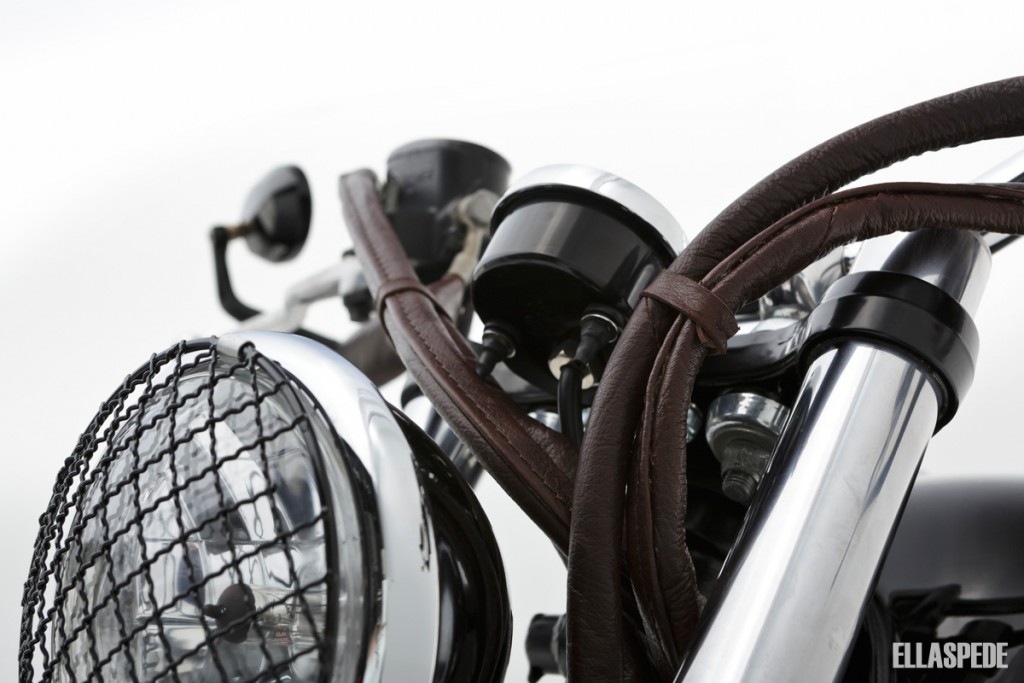 Classy whilst not overly bling was another directive and we knew leather was going to feature (Kangaroo in this case), so whilst discussing seat options a “chesterfield” lounge was mentioned. This was a first for our upholsterer, but they did a bang-up job in producing an authentic chesterfield result that really suits (despite some prior reservations from some).

The removable custom side bags were a partially practical inclusion and keep the theme going, as do the custom cable covers (more C’s) and grip wraps at the front. 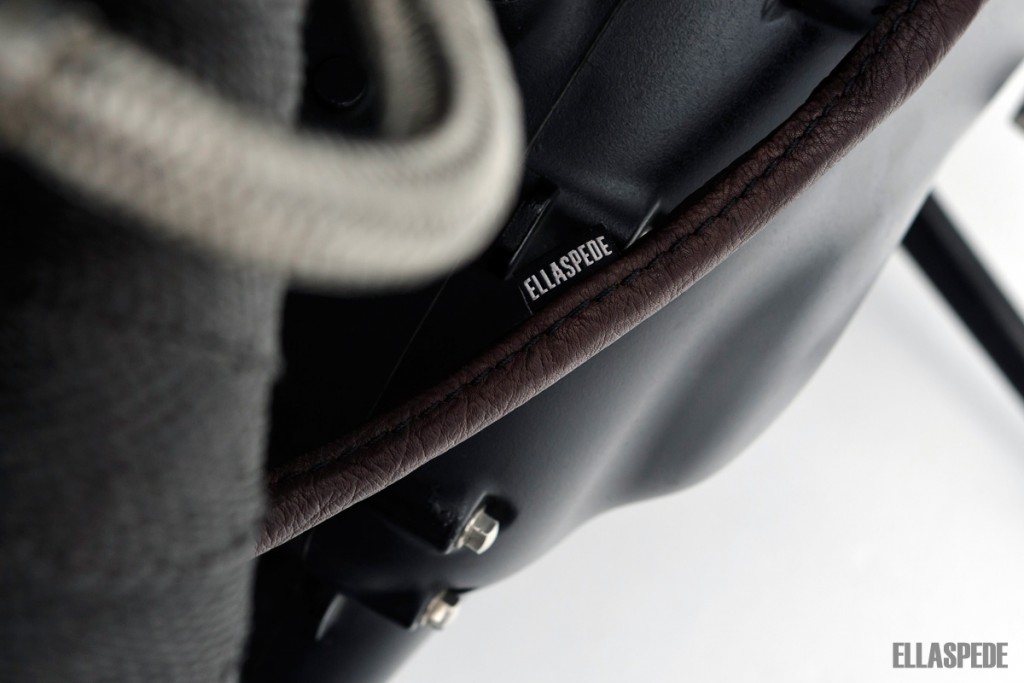 A low mounted Bates style headlight with grill made way for a low mounted Acewell gauge, minimising things up front. Posh indicators and a modified Sparto taillight were the chosen signals. The sparto sits atop a custom rear guard with an Ellaspede “Ninja Star” plate mount. The front guard and chain guard are trimmed standard items.

Behind the scenes are relocated electrics, for a clean look if Steve opts to remove the side bags and expose the K&N filters. 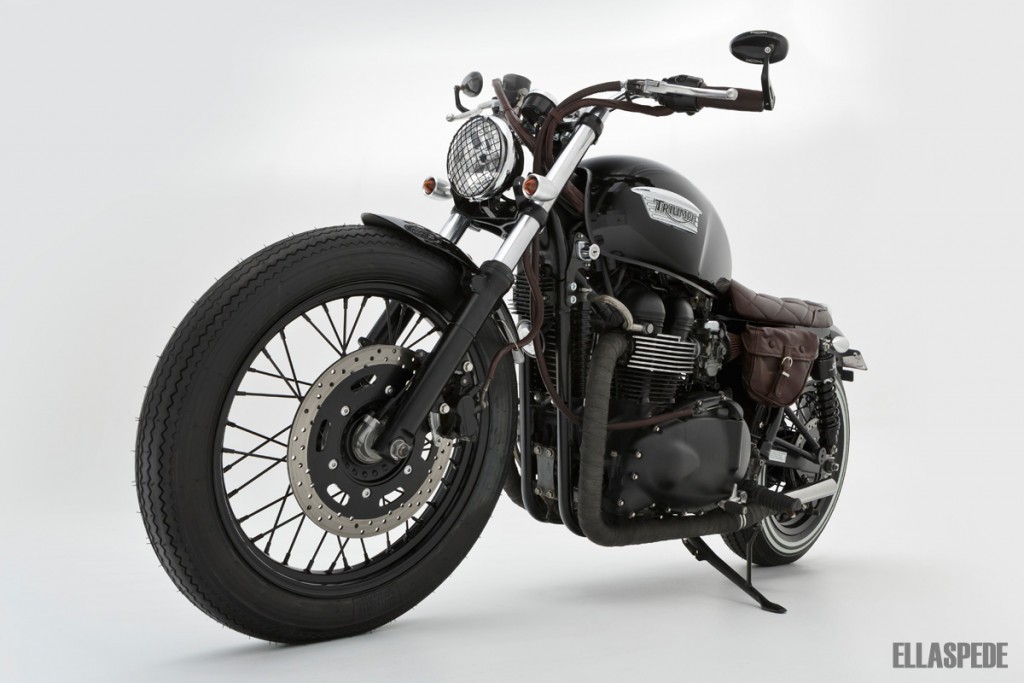 Charcoal pipe wrap covers the pipes whilst a custom stainless baffled extension finishes the exhaust system. Steve has two choices of baffles; one set keeps his neighbors at bay whilst the other may tempt community condemnation (Yet more C’s).

Liberal painting and polishing, finish off the aesthetics.

The usual disclaimer applies here regarding custom bikes… This is our take on Steve’s bike. I’m sure other people would do things differently and that’s what’s great about custom building”