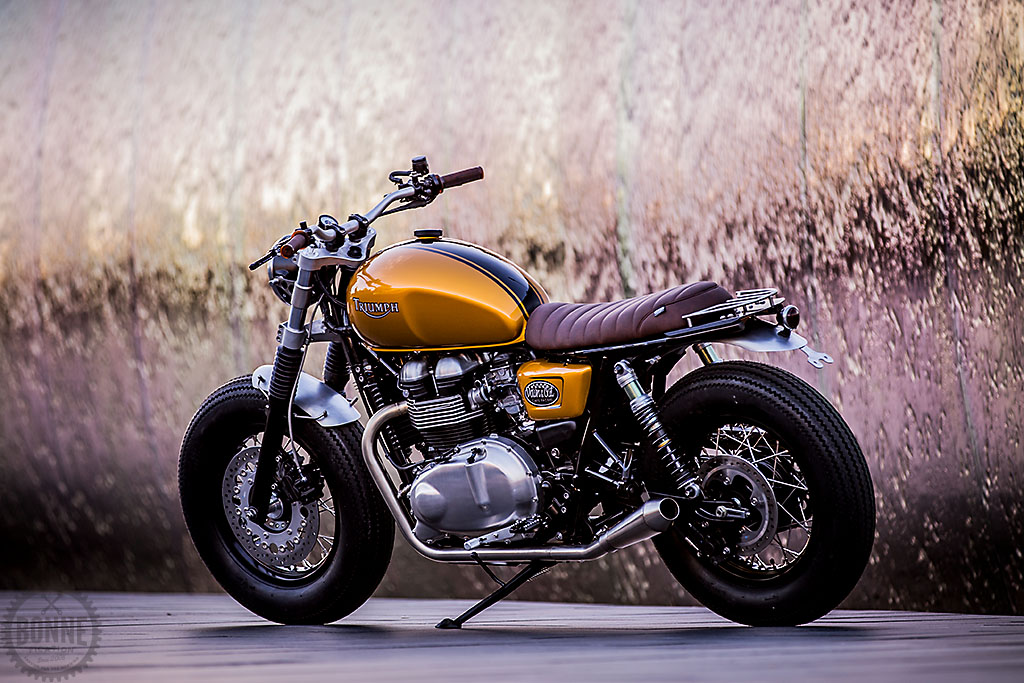 I think it is fair to say that Down & Out Cafe Racers are the UK answer to the well known big name Euro bike builders who have been producing some pretty fine custom Triumph Twins over the last few years. But saying they are the ‘UK’s answer’ is perhaps disrespectful to Shaun and Carl the owners of Down & Out considering just how long they have been doing what they do, and how many bikes they have built. But its only been in the last few years have they turn their considerable technical expertise to popular Hinckley Triumph Twin. Having been to Down & Out’s Barnsley based workshop on several occasions I can testify too the quality of their work. I even have their loop and mudguard kit fitted to my own T100. 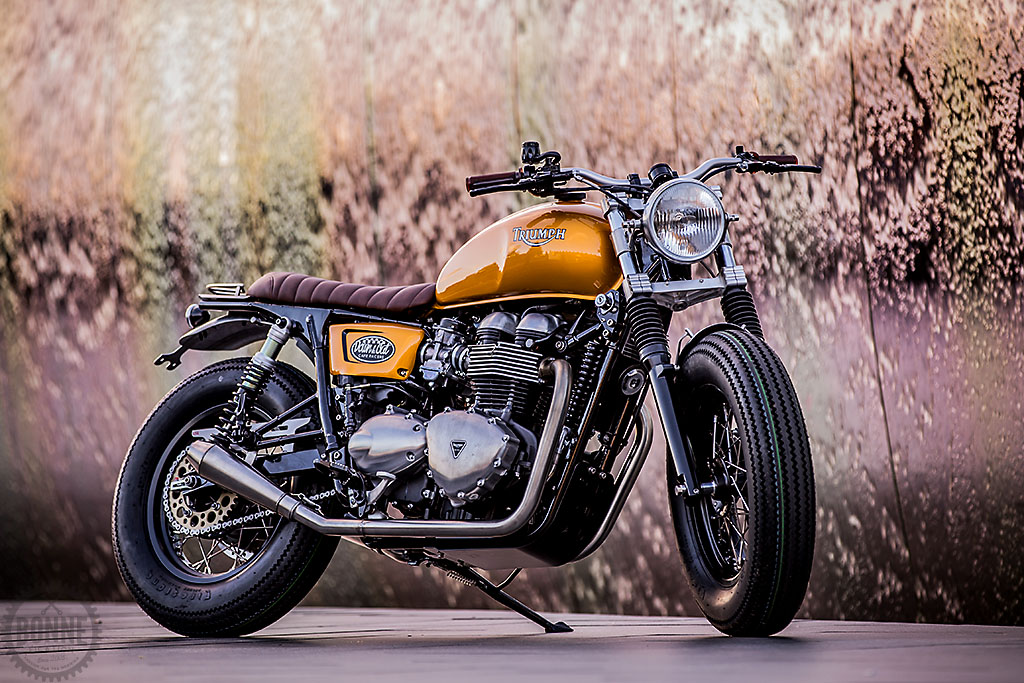 Shaun and Carl were at this years BSMC event in May displaying three of their Triumph builds as well as a couple of BMW’s so its no surprise that the client for their latest creation commissioned D&O to build him a bike to ride to this years  Distinguished Gentleman’s Ride in London, but he only gave Shaun & Carl three weeks to do it in, well clearly that was plenty of time as the bike has been finished early. 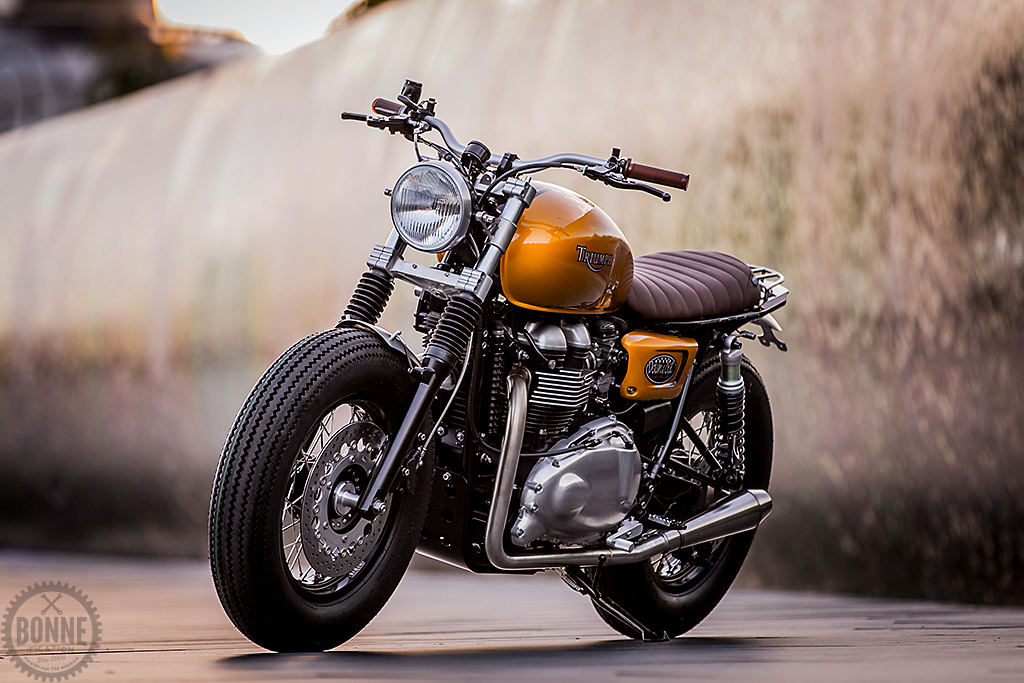 The build is based on a new 2015 EFI Triumph Thruxton, but unlike many top end customs we see, has not been cut, with Shaun instead opting to craft a seat base which allowed the fitting of one of D&O own shorty seats along with a custom rack which was hand fabricated by Shaun in D&O trademark stainless steel.  As you would expect the stock mudguard and light assembly has joined many others in the skip (Triumph should do Cash Back on mudguards and rear lights like Iron Brew did with their Bottles, they could then fit them other bikes and save a fortune, or even better they could just sell a bike without all the parts which we normally bin and we save a fortune!)  This was replaced with a D&O alloy mudguard designed to fit the stock and unaltered frame and topped off with the popular Bates style LED tail light and stainless number plate bracket. 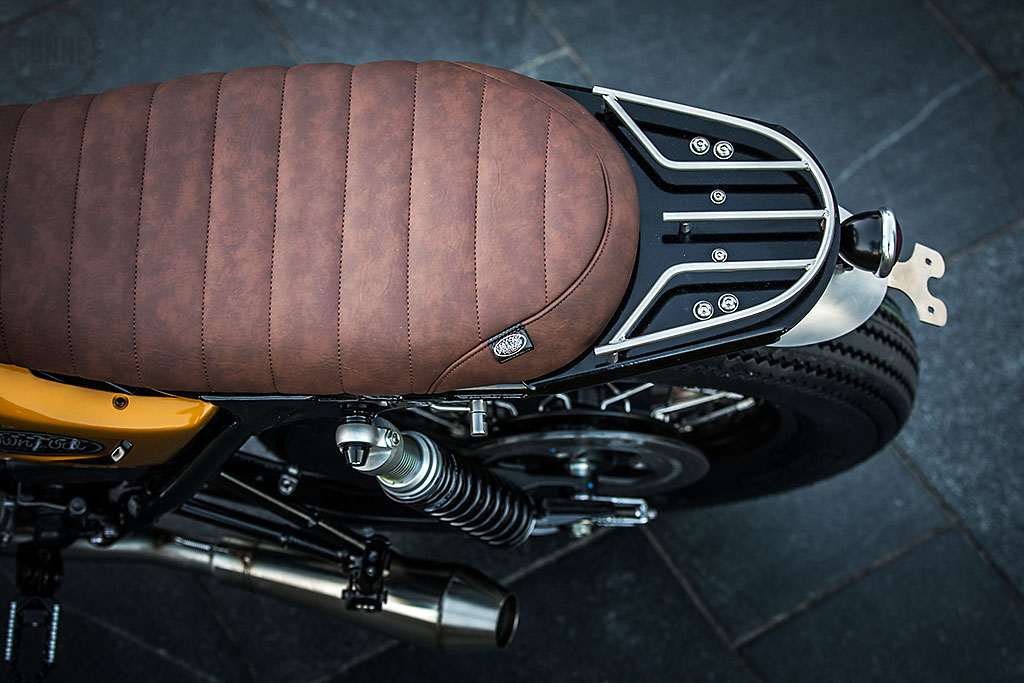 The warm and rich choice of paint is named ‘Fools Gold’  and features on both the tank and the JVB short side panels which expose both rear brake reservoir and intake bell mouth was painted by Pro Kustom and works really well with the brown seat, a choice of colour I know many don’t like, but you will have to agree on this occasion its a great choice. 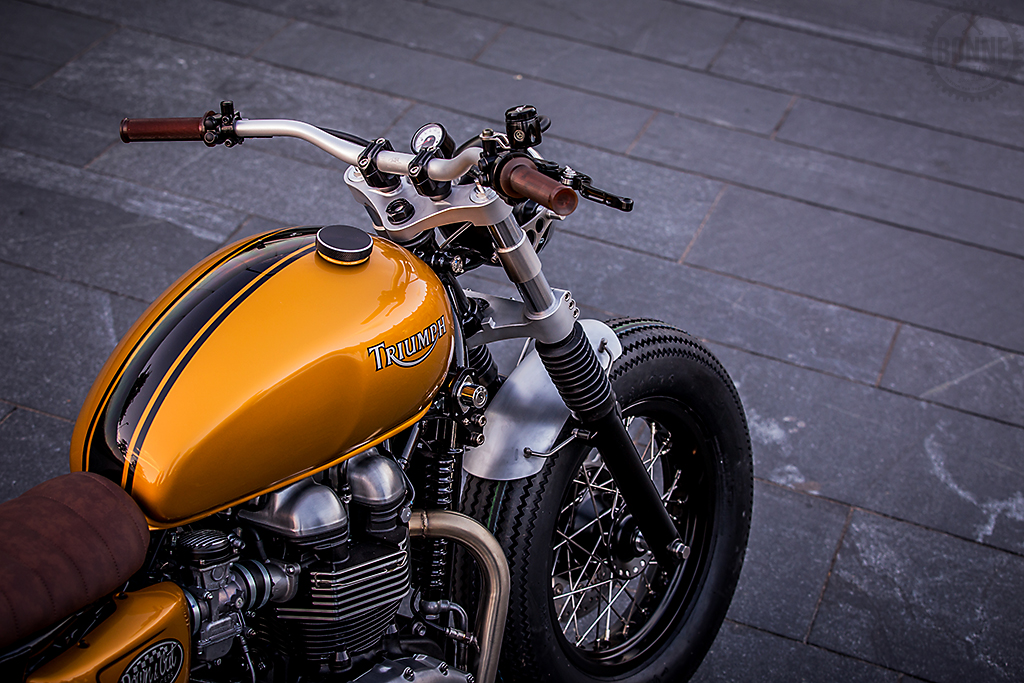 A key feature on this Triumph are the fat black 16×3 alloy wheels on stock hubs, fitted with the classic Firestone 500×16 Delux tires which are one of Shaun’s passions, with fat tyres featuring on several of D&O builds and made possible on this occasion by the addition of D&O own Wide Fork Kit which was made in collaboration Fasttec Customs. 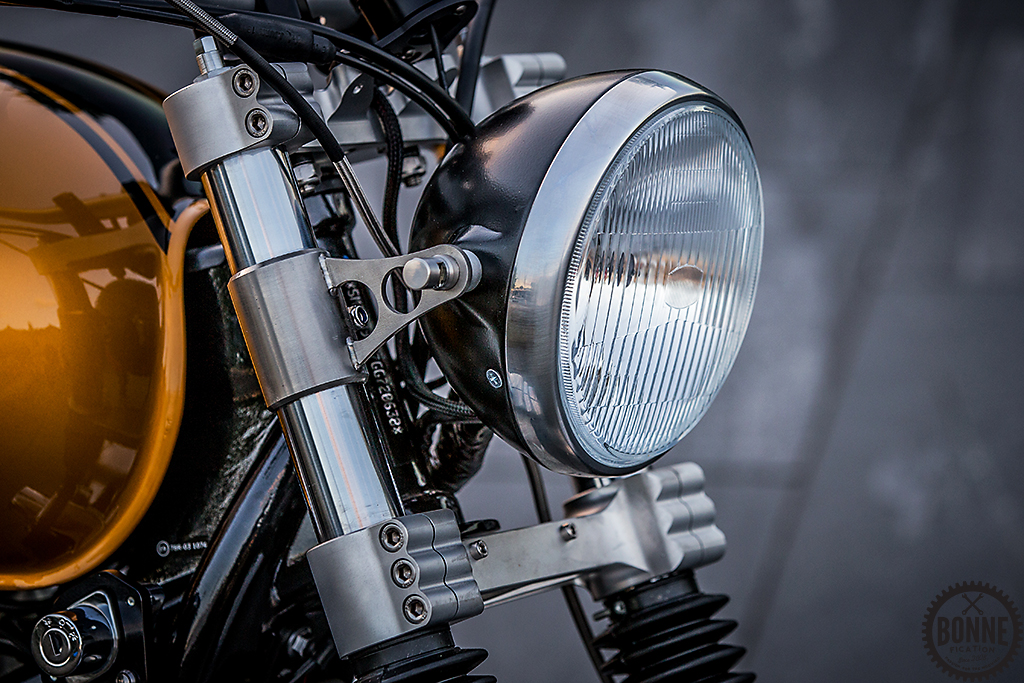 The forks have then been fitted with fork gators and a new headlight and brackets, with the spray kept at bay by D&O’s trademark alloy front mudguards again featuring brackets fabricated in stainless steel. 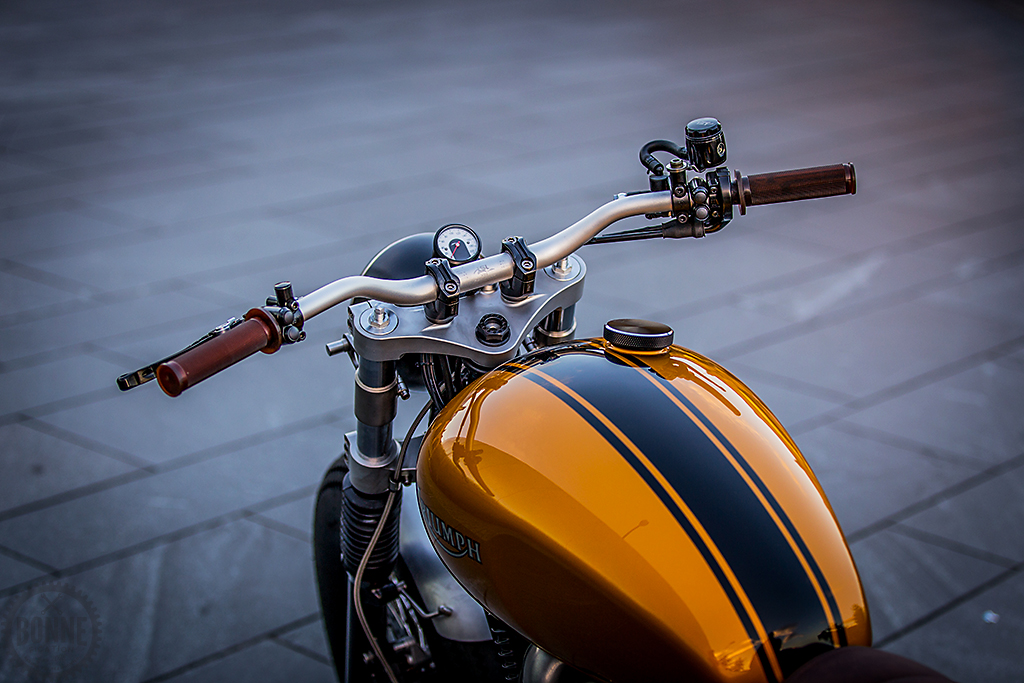 Motone Customs who make an extensive range of parts for the Triumph Twin have recently began production of some great looking micro switches which D&O have fitted to a new set 7/8 LSL bars with LSL risers. The wires for the Motone switches have been fed through the bars giving the bars a clean stripped down appearance preferred by D&O. 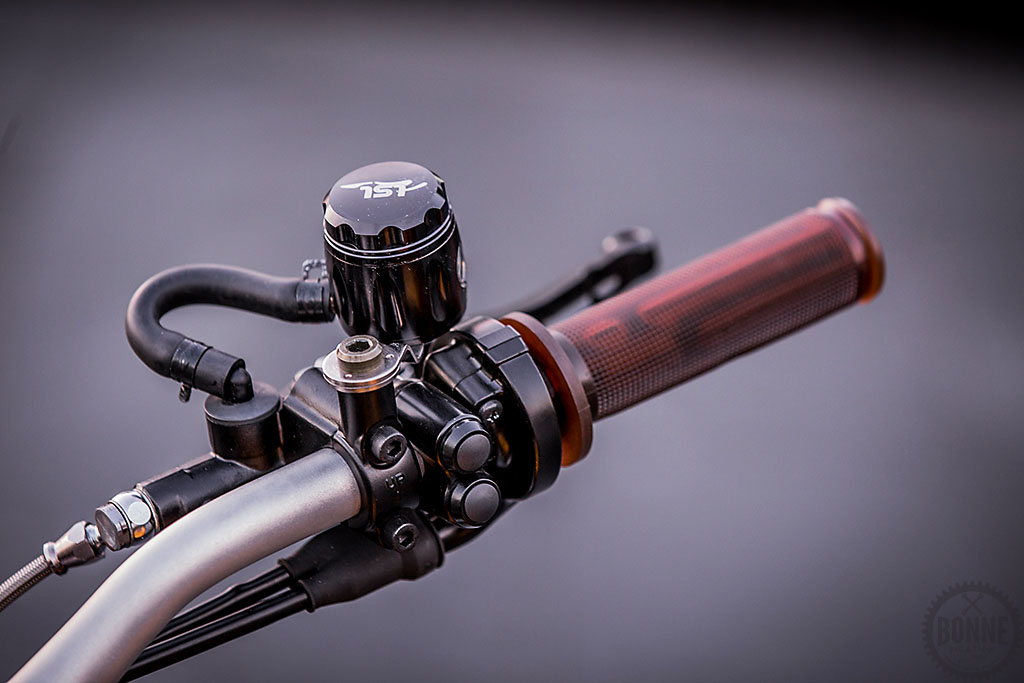 The change of bars to 7/8 from the Thruxtons 1″ was intentional as this allowed the fitting of the more compact brake and clutch assembly usually seen on the SE and Scrambler, these were then fitted with D&O’s own short levers with the brake reservoir being topped off with the more attractive LSL pot – finishing the bars off are set of brown Tomeseli grips which match the seat a treat. 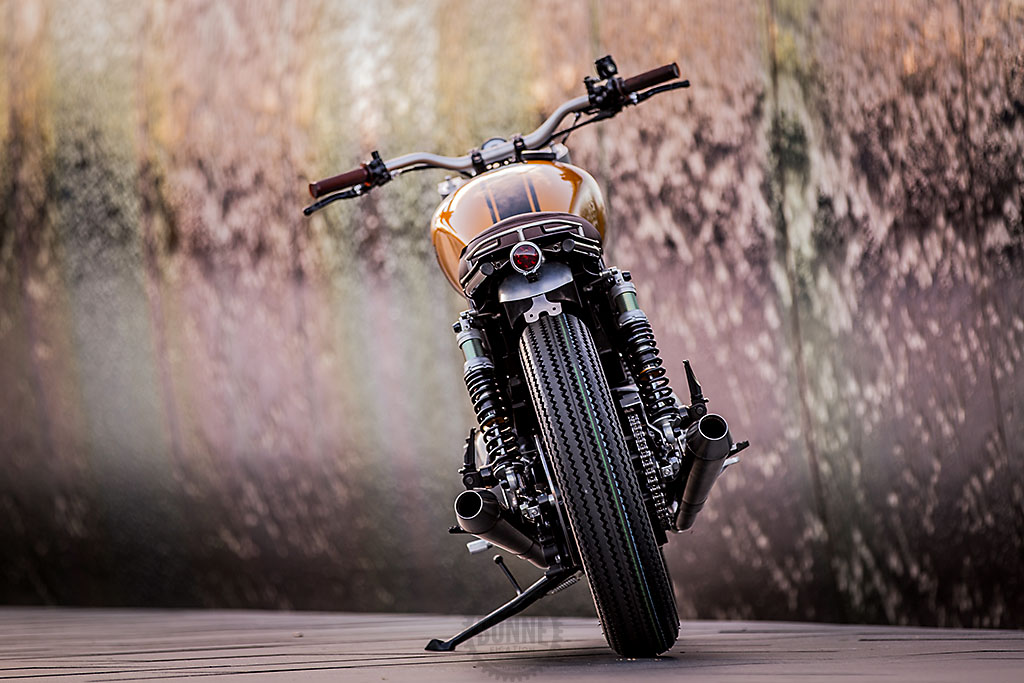 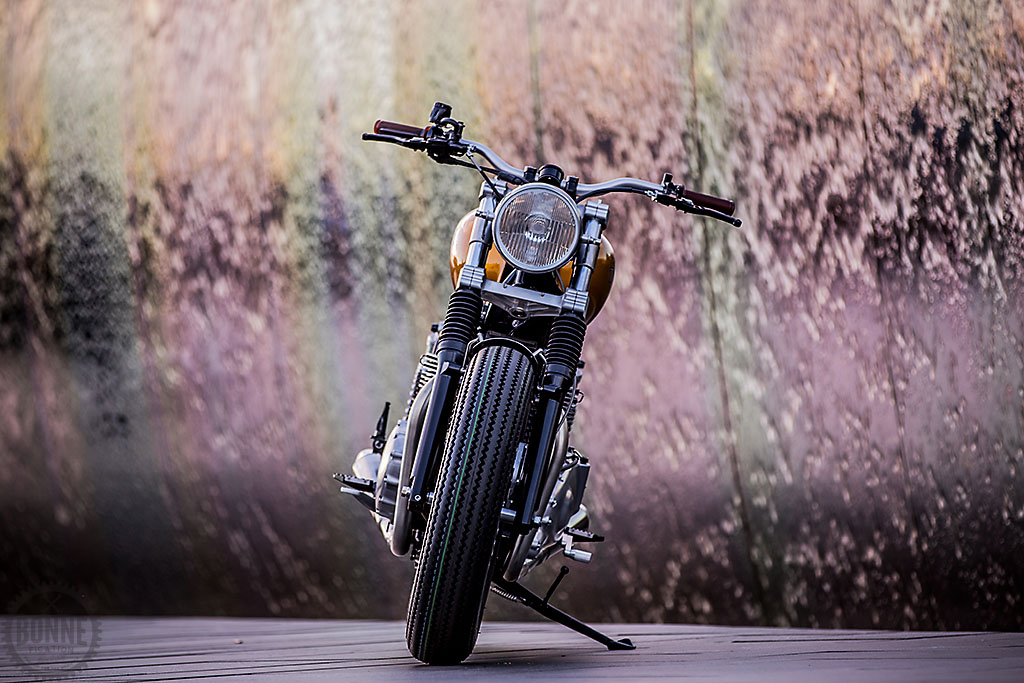 Like many custom twins the performance on this build has not been greatly increased with just the breathing being improved with the fitting of a Motone aluminium bell mouth, a cool set of D&O’s  2>1 stainless exhaust system and then finally a remap. The stock rear shocks have also been binned and replaced by a set Ohlins. 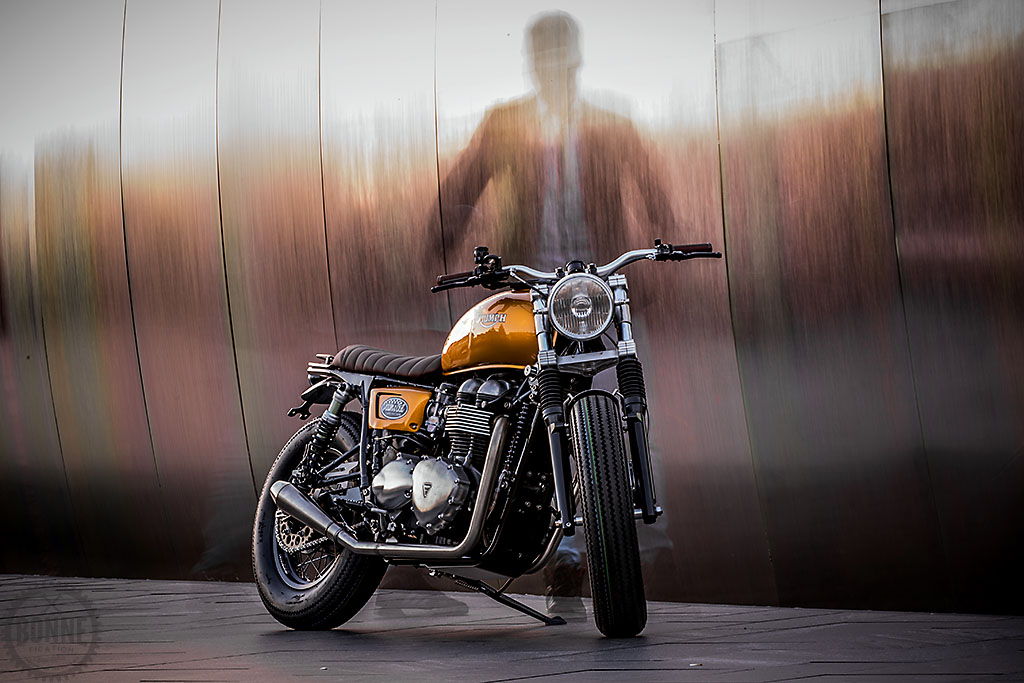 This build features a plethora of Motone parts, along side those from LSL, with the Petrol Cap, Gear Leaver, Regulator Relocation Bracket and Choke Knob all coming from the Motone catalogue and the Ignition Relocation Bracket and Chain Guard coming from LSL. On top of that the bike also features a range of D&O’s product which include their Bear Trap foot pegs,  head light, mounts, and micro indicators, this is of course in addition to all the parts previous mentioned, many of which are or will be available from the D&O webshop 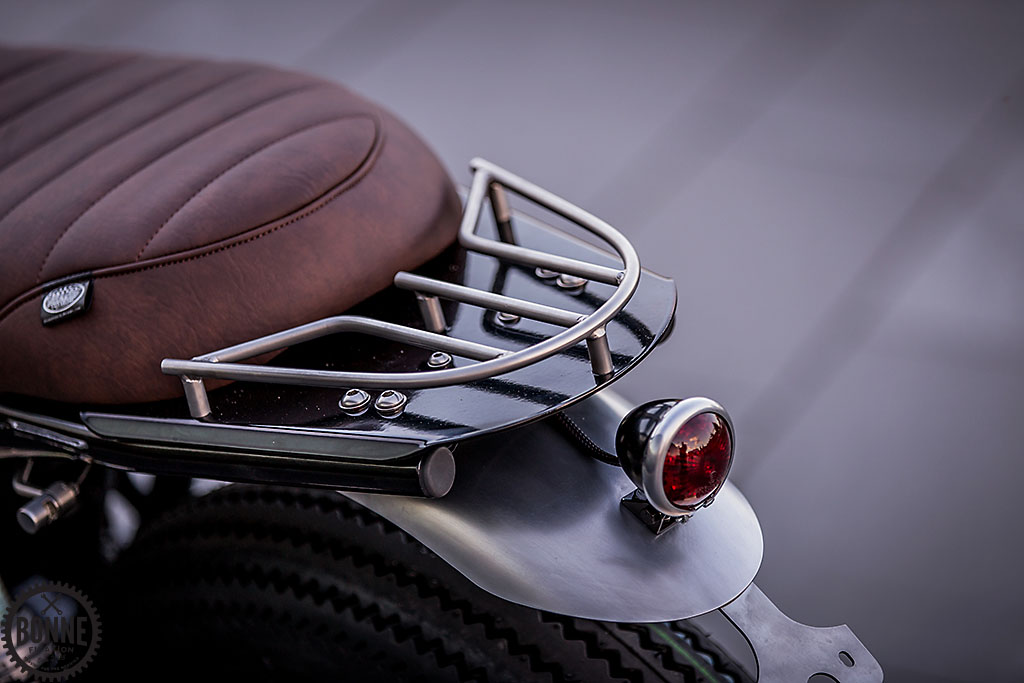