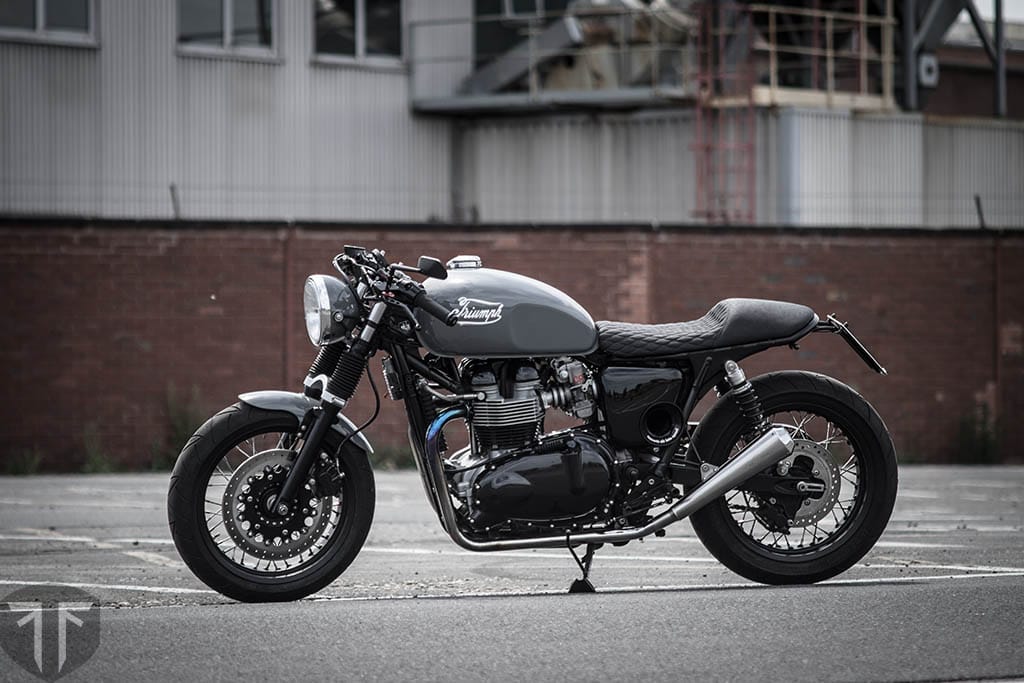 The Cafe, the Caff!, the greasy spoon, an eatery, a noshery – unremarkable places, often packed with lorry drivers taking a rest from hauling overpriced crap we don’t need. Other than a decent cuppa and a full breakfast the next best thing to come from a British ‘Cafe’, are the bikes named after them – the ‘Cafe Racer’s’, or should that be ‘Caff Racer’s, it’s unlikely you would of found too many saying Café back in the 50’s and 60’s, unless they were trying to be posh. 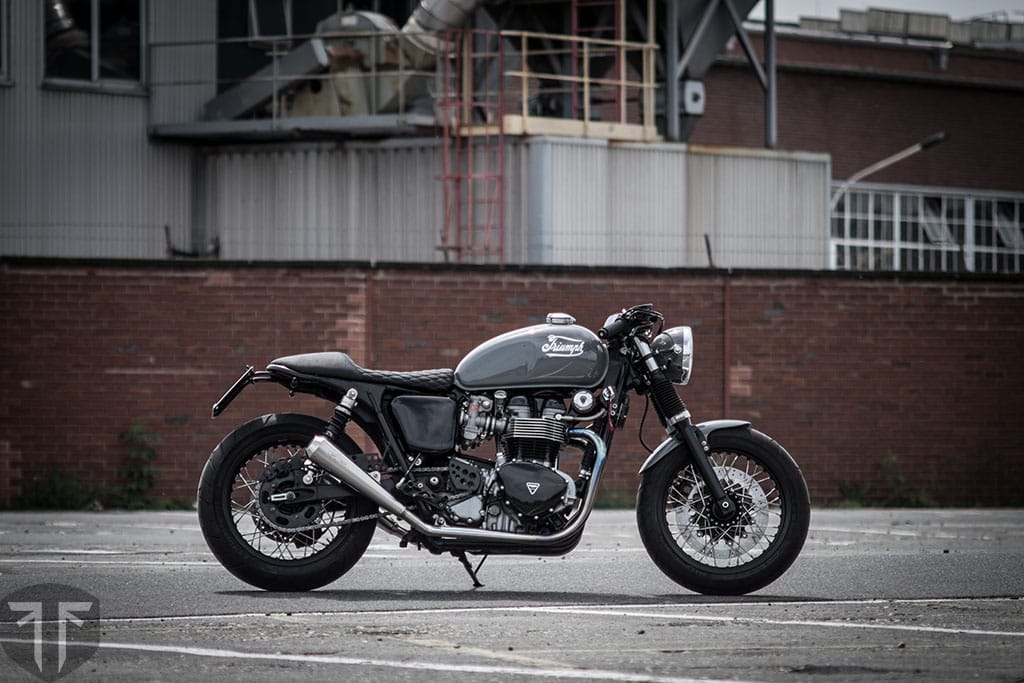 Then, a girl may need to say ‘Café’ like a Parisian, if she wanted to get on the back of 37 year old, Dr. Dennis Albert’s, 2006 Triumph T100 ‘Café Racer’, a bike which Dennis built himself in his parents basement workshop, a workshop which Dennis also built, and a workshop which should be a Cafe itself!. 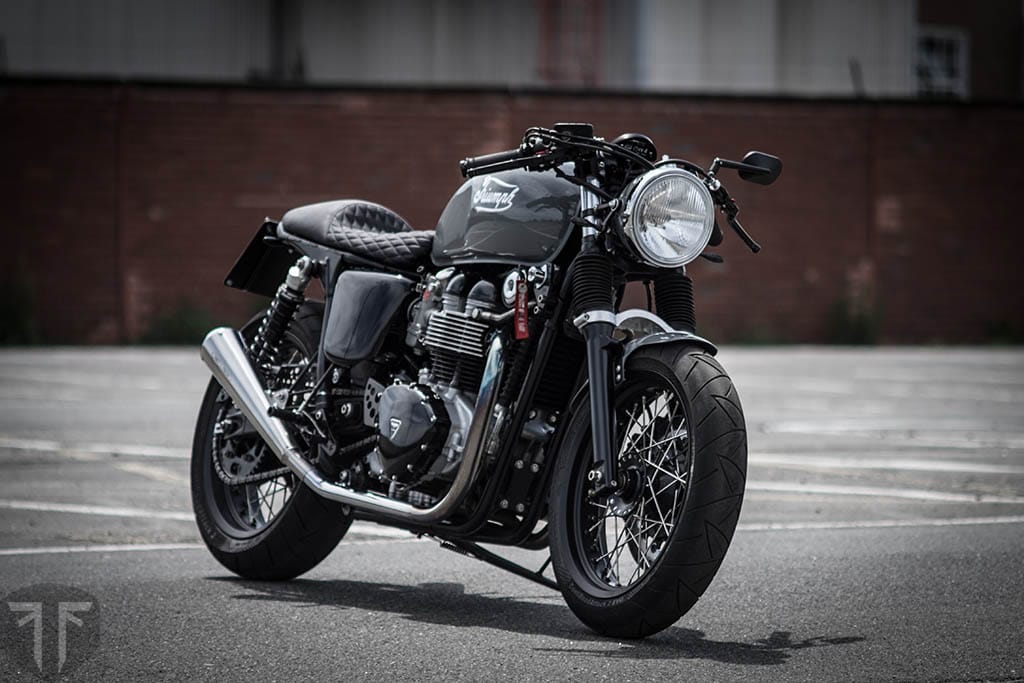 Dennis has been riding bikes since his 16th birthday, and in the twenty something years since has traveled all over Europe with his father, who like Dennis is a passionate Biker.  The Bonneville came into Dennis’ hands five years ago, and every winter since the T100 has been modified by Dennis in the basement workshop. 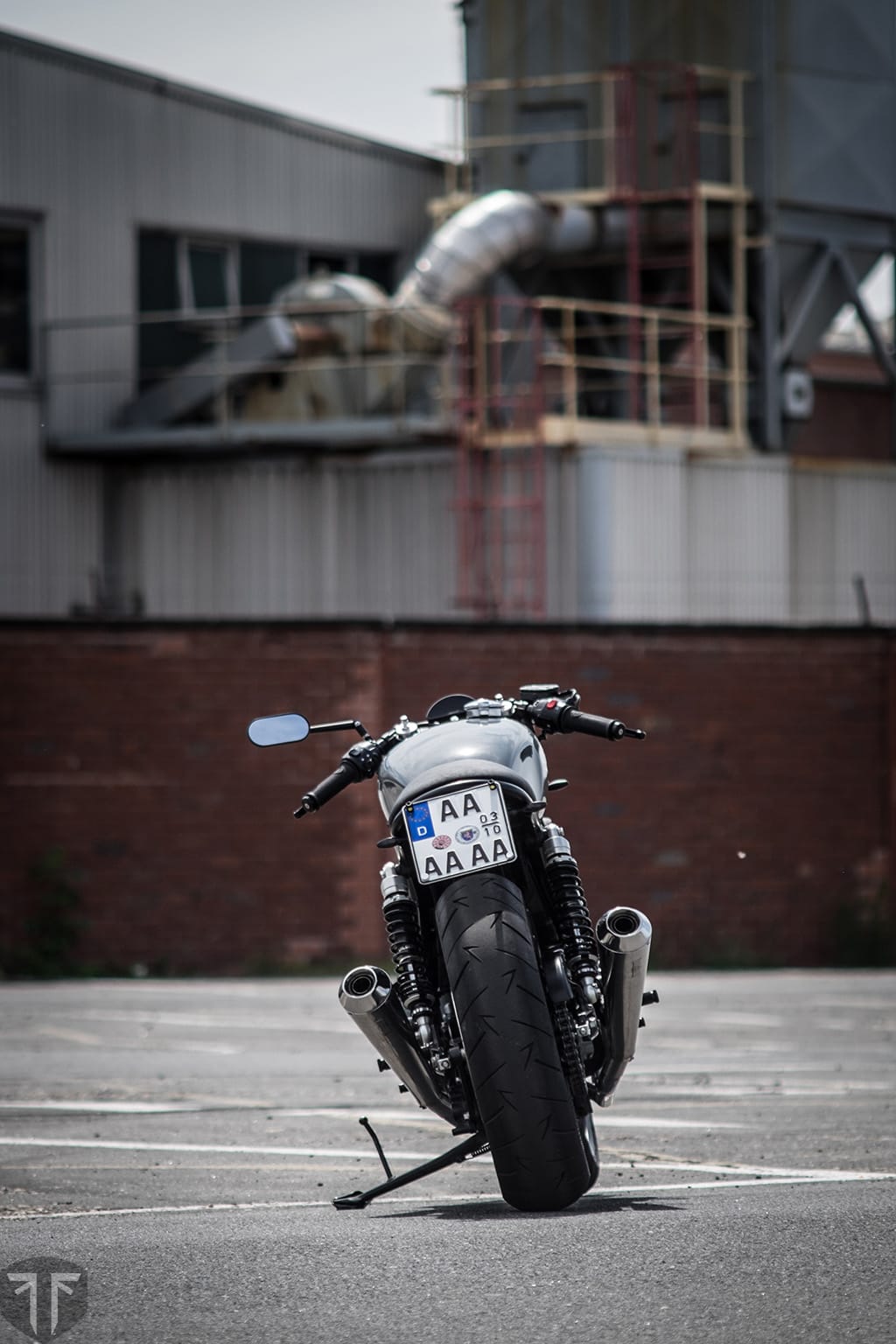 Many of the Triumph’s modifications were done in-house, literally, including the chopping and looping of the frame and fabricating items such as the seat base, front mudguard, number plate bracket – and a very cool intake bellmouth made from a ‘marmalade funnel’, something which are normally used to poor preserves into a jar – I know!, clever stuff! 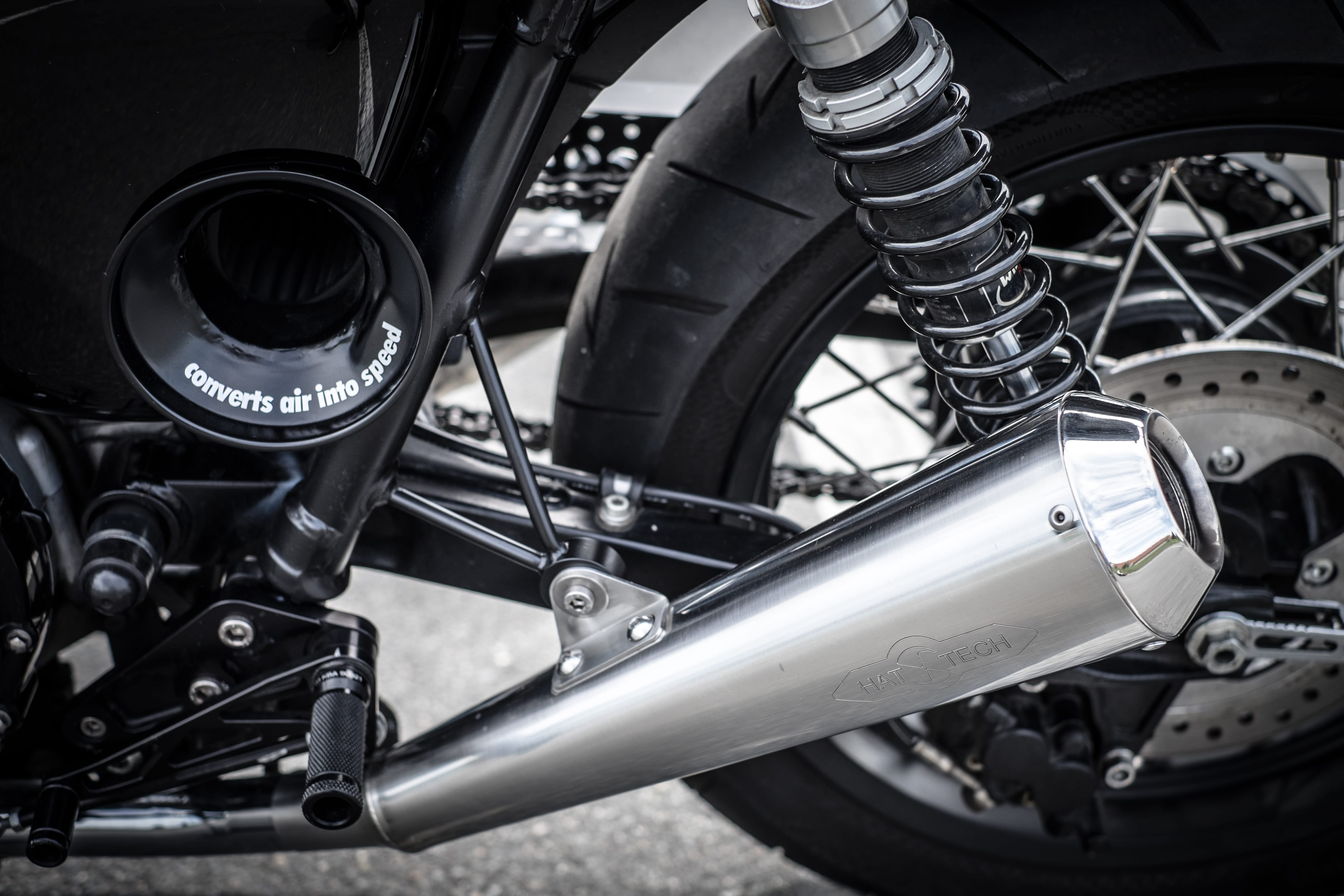 The front end on the T100 Dennis tells me, is off a Thruxton, and has been fitted with rubber gaiters, an LSL headlight, with the bowl painted to match the bikes tank and side covers, and mounted to the bike using LSL bracket’s. Other LSL goodies include; bars, grips, brake and clutch levers and steering damper, topped off with a Norman Hyde fork brace. The stock speedo is gone, being replaced with the excellent Motogadget Pro, which does a great job of cleaning up the T100’s front end profile. 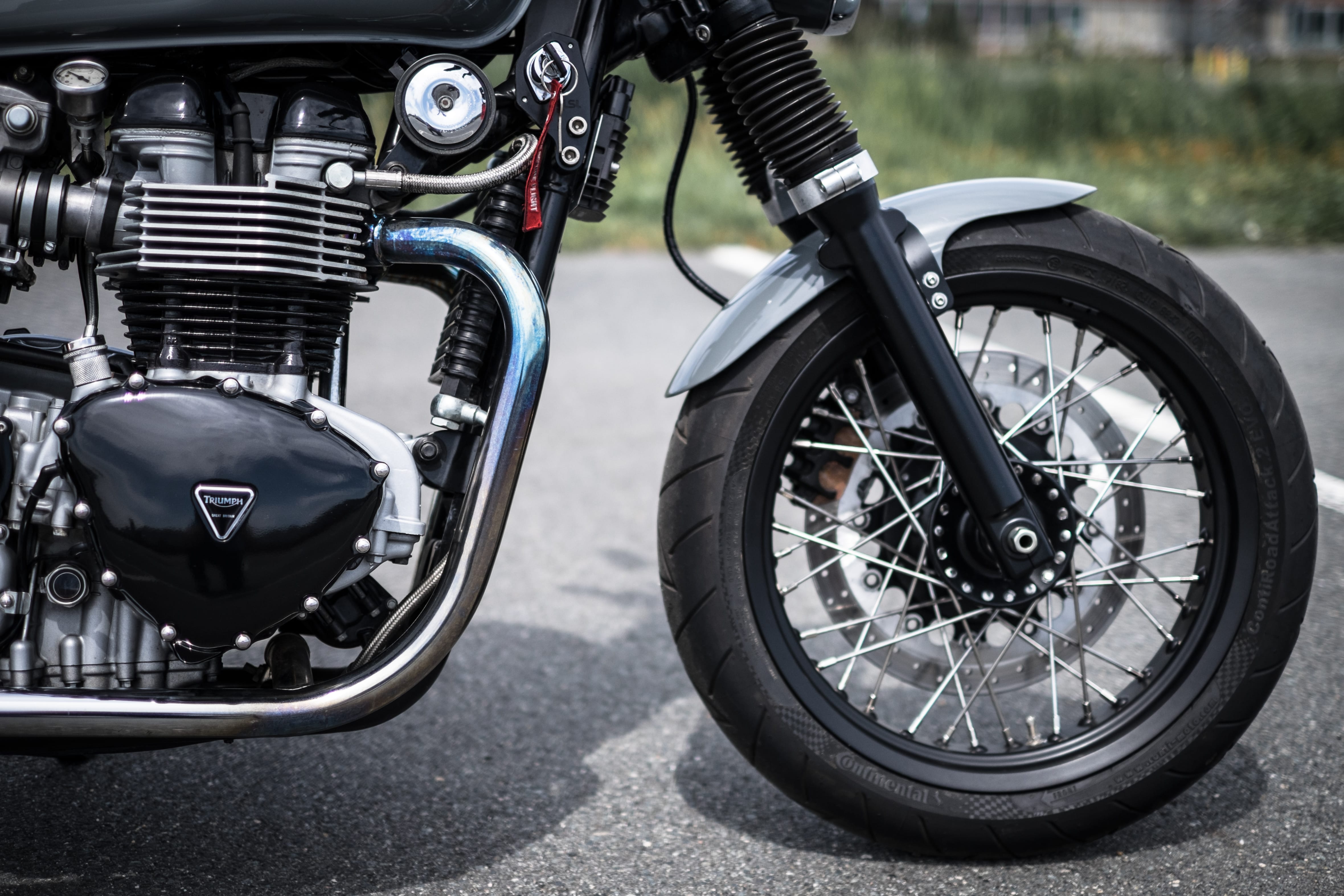 “I really love the bike. It rides much more sporty and more direct than before. The sound is great. I’m just happy every time the engine is running and I’m riding around”. 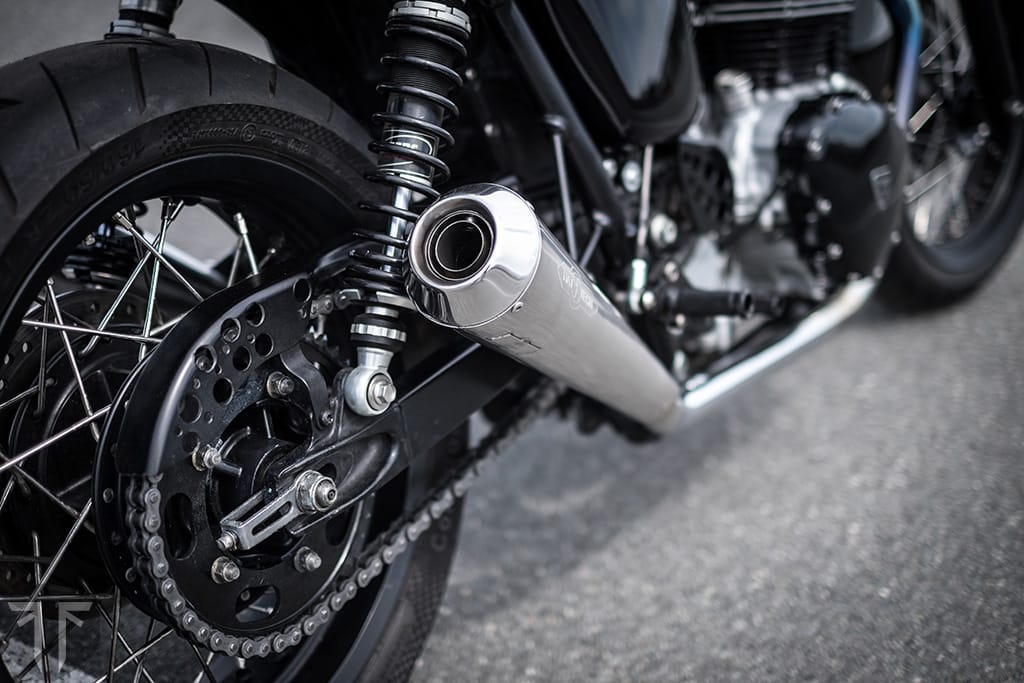 The T100’s suspension has had a much needed upgrade being fitted with Wilbers shocks and springs. The stock and heavy wheels have been replaced,with the bike now sitting on black coated San Remo Rims (3,5×17 and 4,5×17) which have been laced to the stock hubs using stainless spokes, and then fitted with a Beringer disc and shod with a set of ContiRoadAttack’s

The engine on this T100 has also received a degree of attention, being fitted with black coated side covers, a custom coated  sprocket cover and oil temp and pressure indicators. But it hasn’t stopped there for this lucky little Bonneville, being fitted with a set of Keihin CR35 carburettors, Nology ignition and a Custom Hattech Exhausts system in stainless steel, all of which should give this T100 a little bit more go! 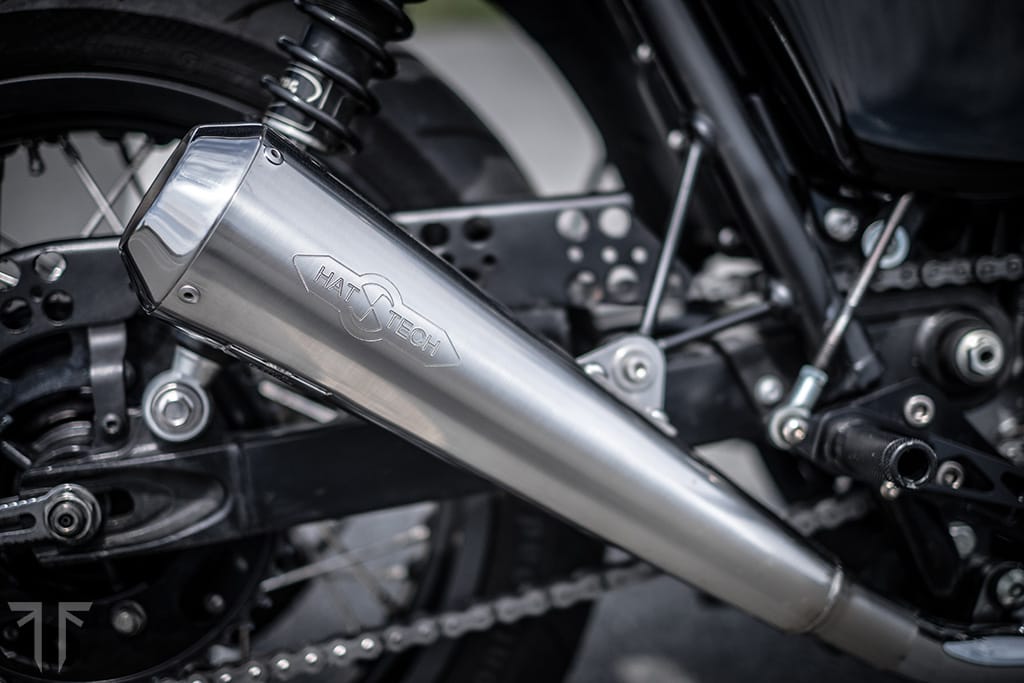 The finished Triumph T100 Café Racer is one bad ass looking machine, and is a credit to Dennis’ hard work and dedication – It’s now the sort of Café Racer that could stop a girl from speaking posh, and start talking dirty, which im sure she will do when she is taken back to that basement garage!