DMoL – ‘Up Yours Copper’ 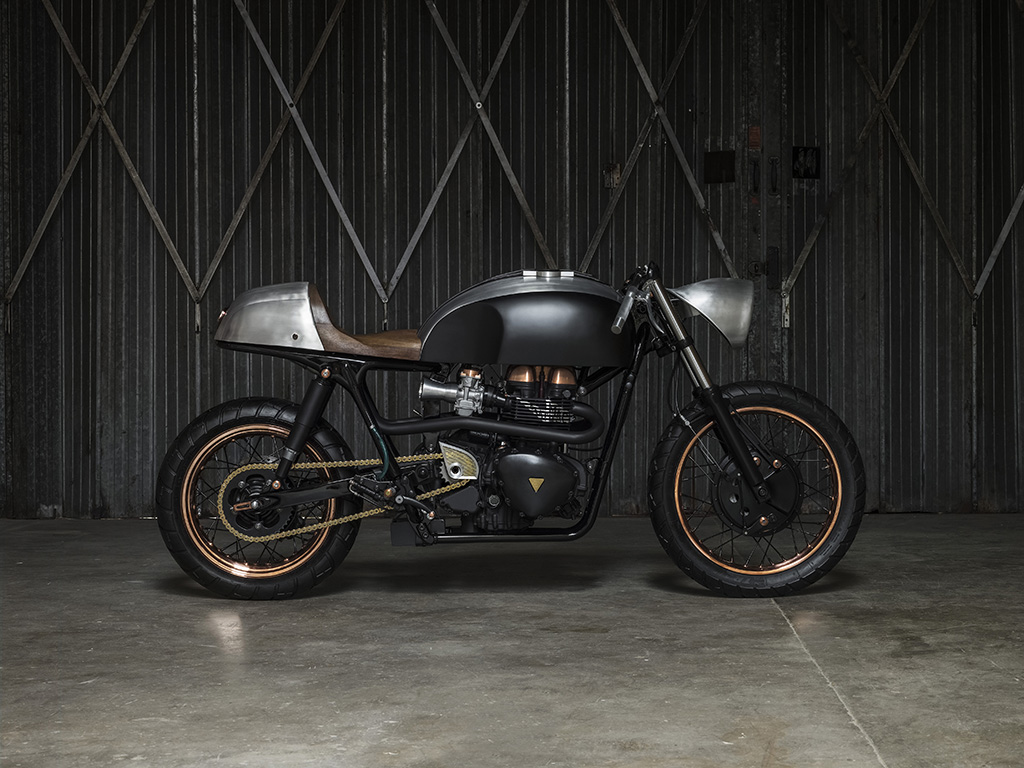 The ‘Up Yours Copper’  by Death Machine’s of  London created a bit of a stir at this years Bike Sheds show, a build based on an early 2007 EFI model Thruxton – described as an ‘exercise in detail and materials’.  It was certainly a crowd pleaser, standing out against a show full of Triumph Twin’s, though perhaps unlike many motorcycles on display, it may not be the most realistic daily rider, but it was certainly one of the most beautiful. 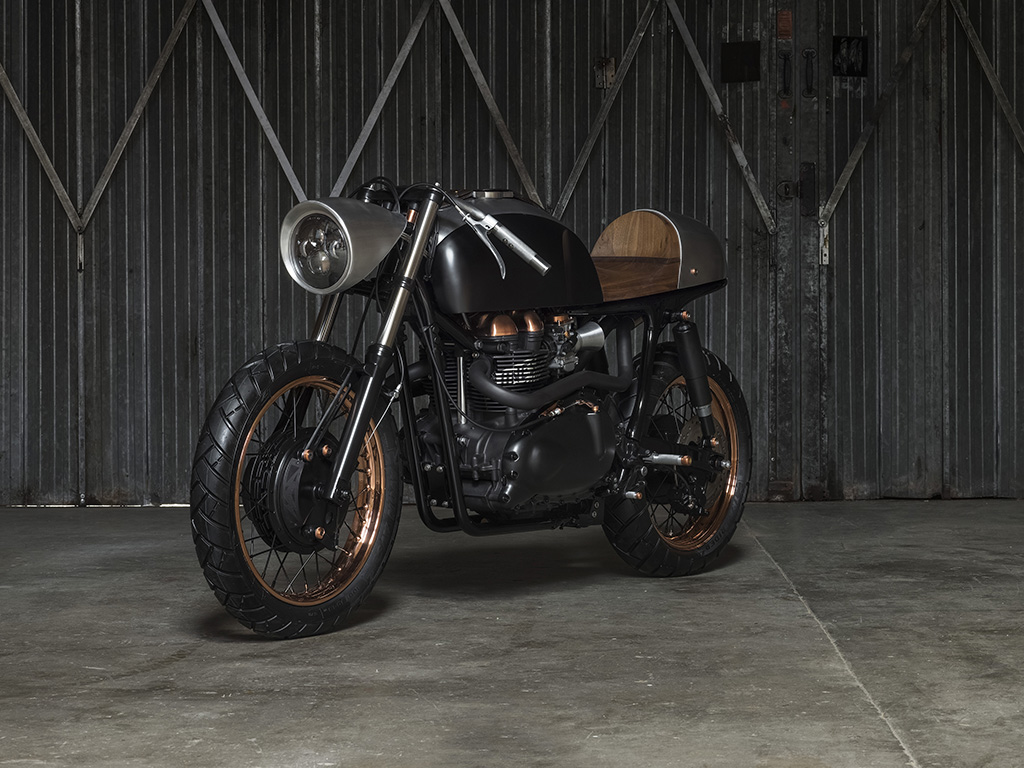 The lines on this Triumph Twin are pretty incredible, stretching from the custom headlight assembly, along the Slippery Sam style Tank and back to a seat cowl featuring a not entirely comfortable appearing seat base. 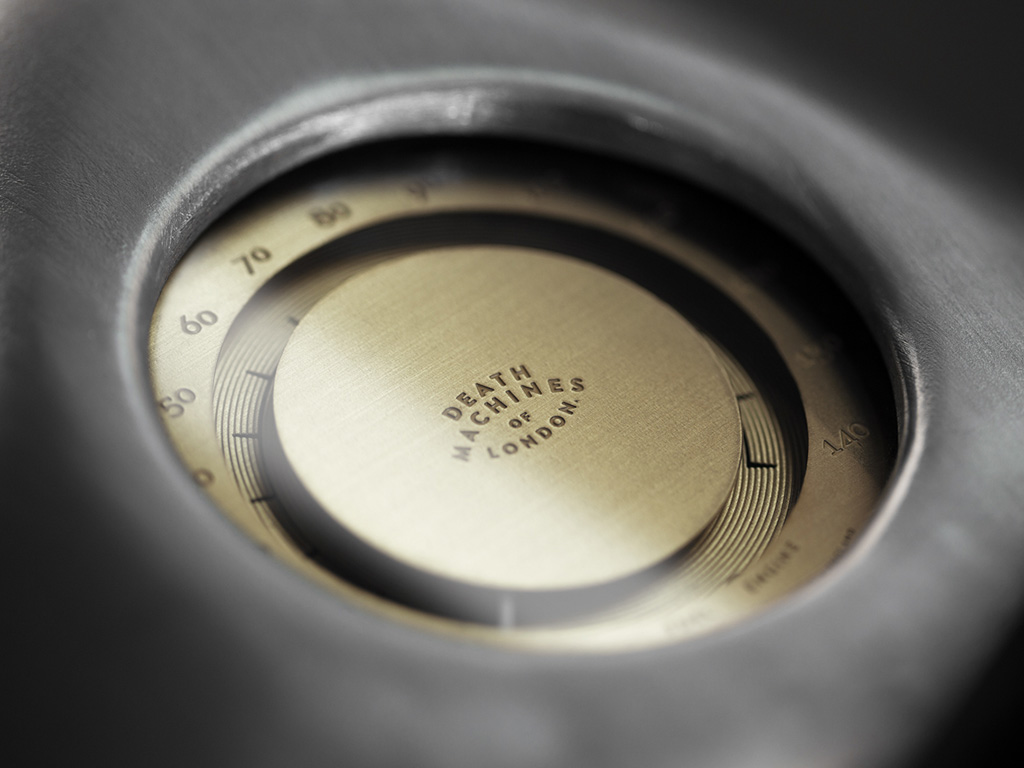 The headlight cowl is fabricated from brushed aluminium, inside which is a 7” military spec LED lamp and custom-made speedometer, a speedometer crafted from precision-etched solid brass, a process used in watch making. 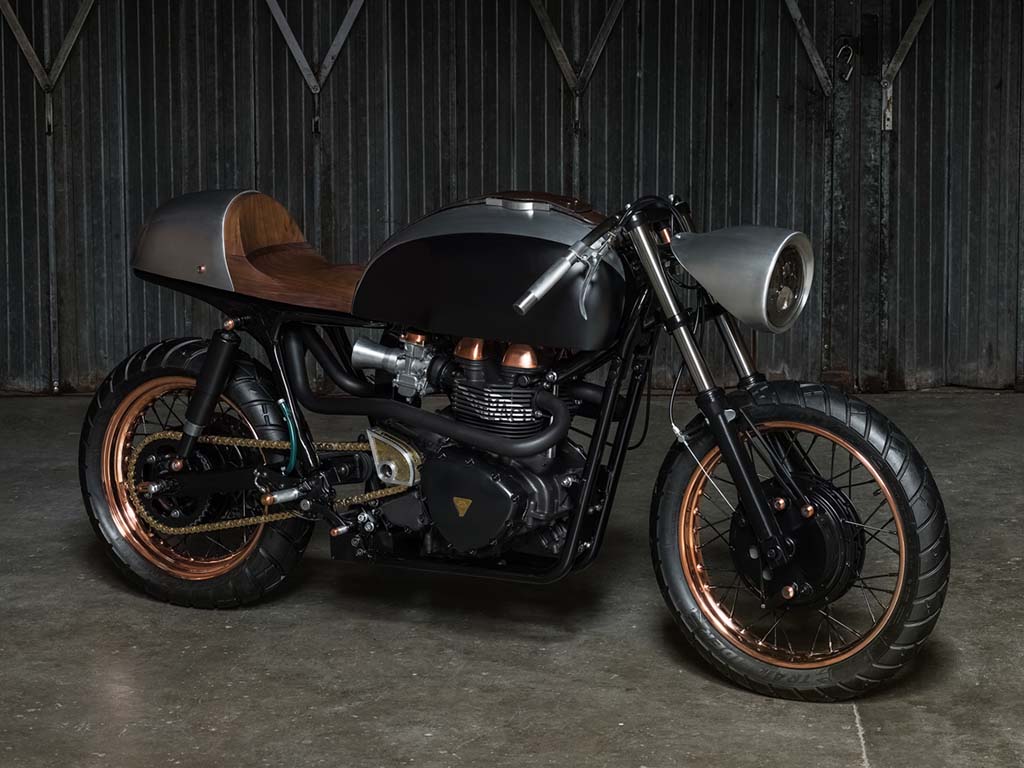 An alloy tank was sourced and modified by the DMOL team, finished in satin black and brushed aluminium, with the contrasting finishes being separated by a gloss pinstripe. This was then fitted with a hand-stitched leather tank strap with custom aluminium clamp – topped off with an aero style filler cap covered with a brass plate engraved with the Hunter S. Thompson quote: “Faster, faster, until the thrill of speed overcomes the fear of death.” 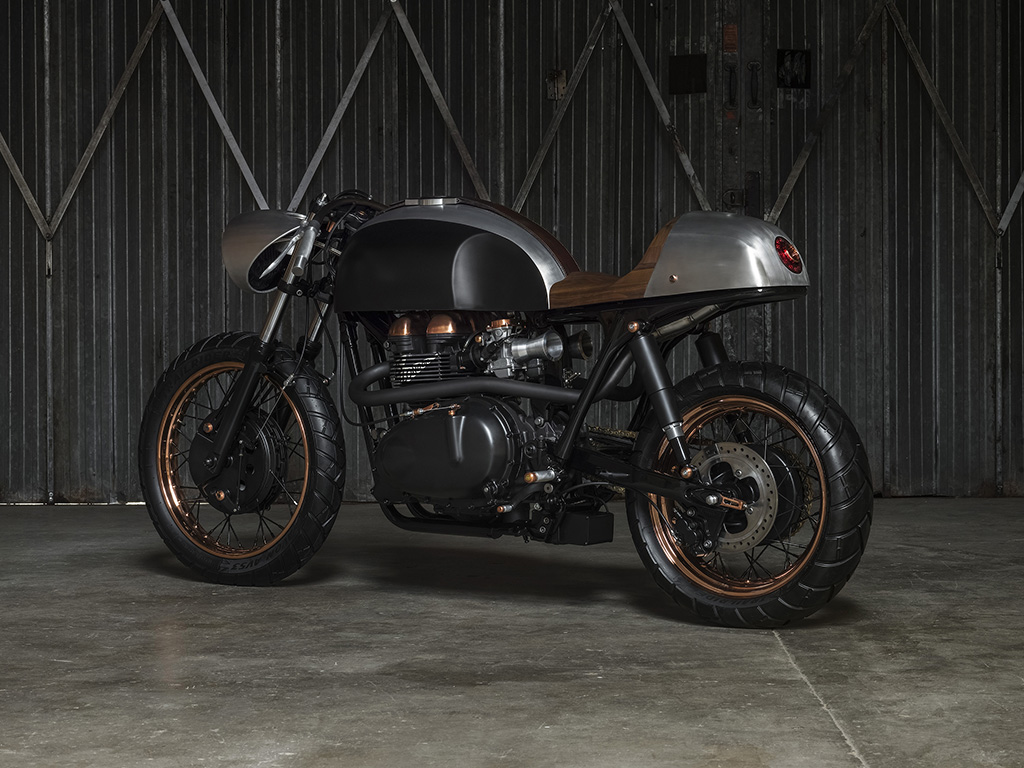 The aluminium seat-cowl was designed and fabricated in-house, and features what is in-fact a “extremely comfortable” seat base shaped from seventeen parts of American Walnut,  finished with several coats of Danish Oil , and sculpted by Ben Heeney at Ian Dunn Woodwork and Design. 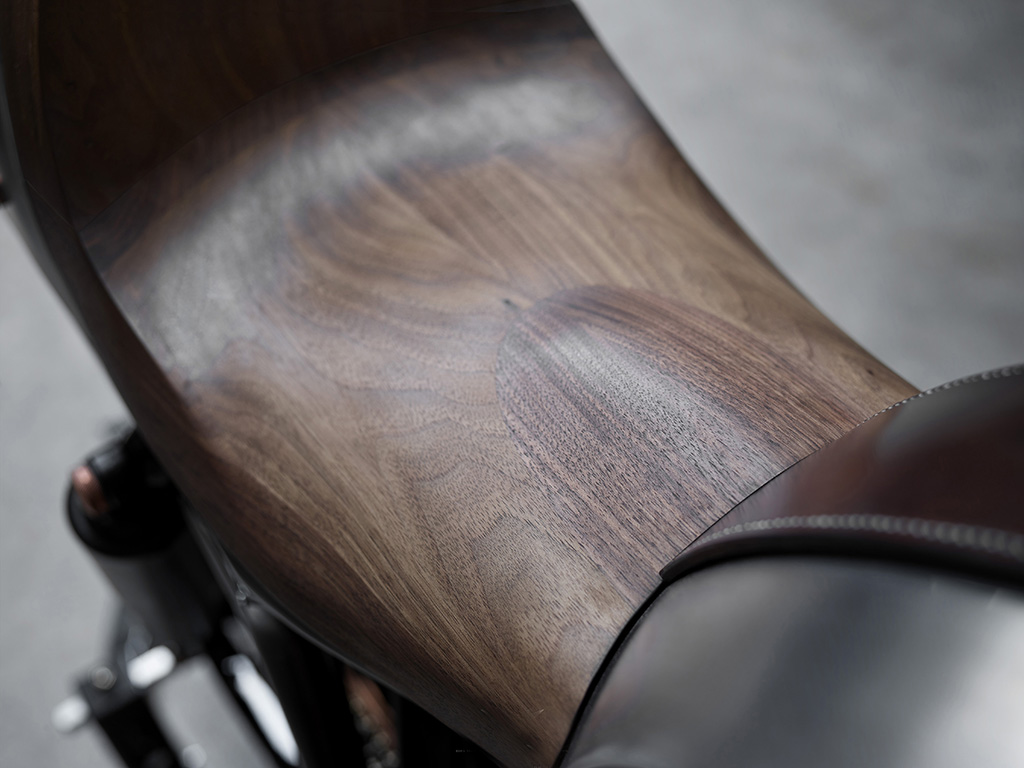 A full custom exhaust system has been fabricated, and re routed through an extensively modified and powder coated frame, now venting from the middle of a custom LED tail light located within  the cowl, made possible using ceramic coating, brass heat-shields and lots of technical know-how. 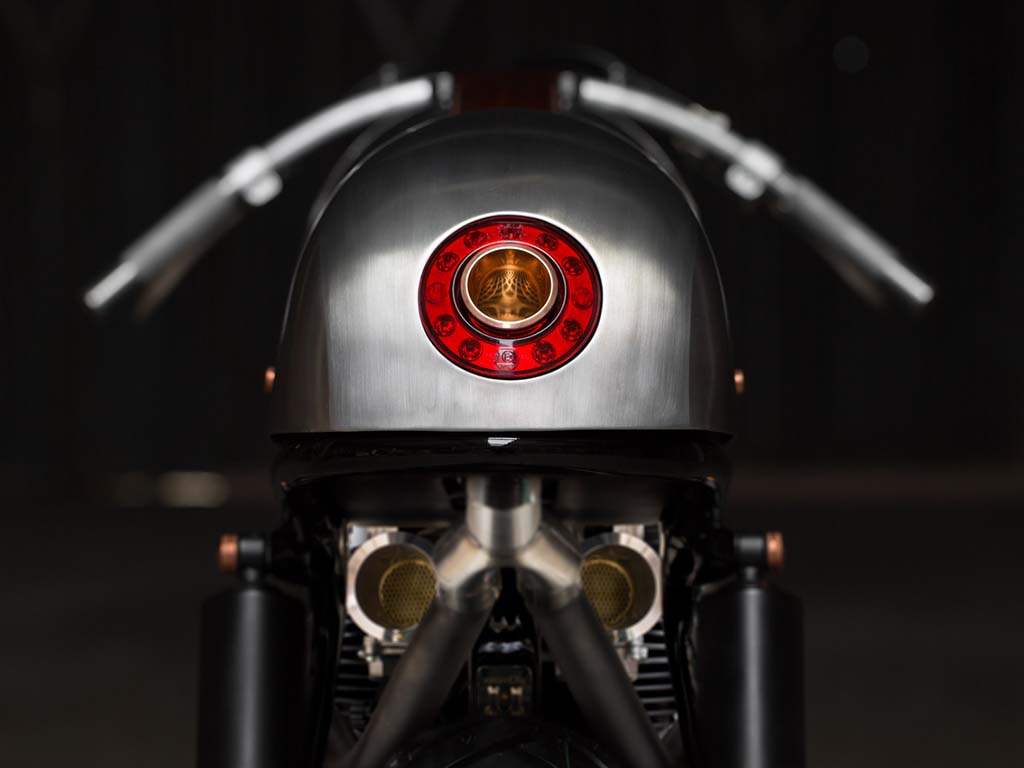 The bespoke and sweeping handlebars are welded from underneath to a top clamp which continues down through the yoke and into copper spacers, which hold the light cowl assembly in place. 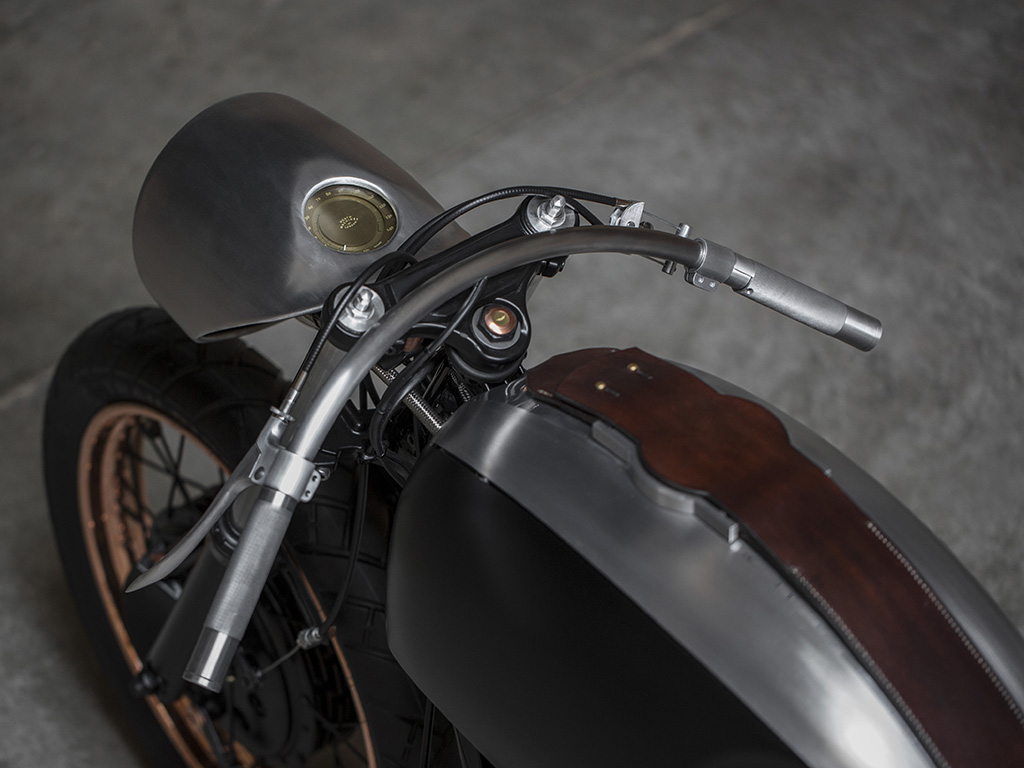 These bars have been fitted with custom brake and clutch levers, with the throttle assembly concealed within the knurled custom grip, with the finger-tip controls for the lighting and horn located on the left. 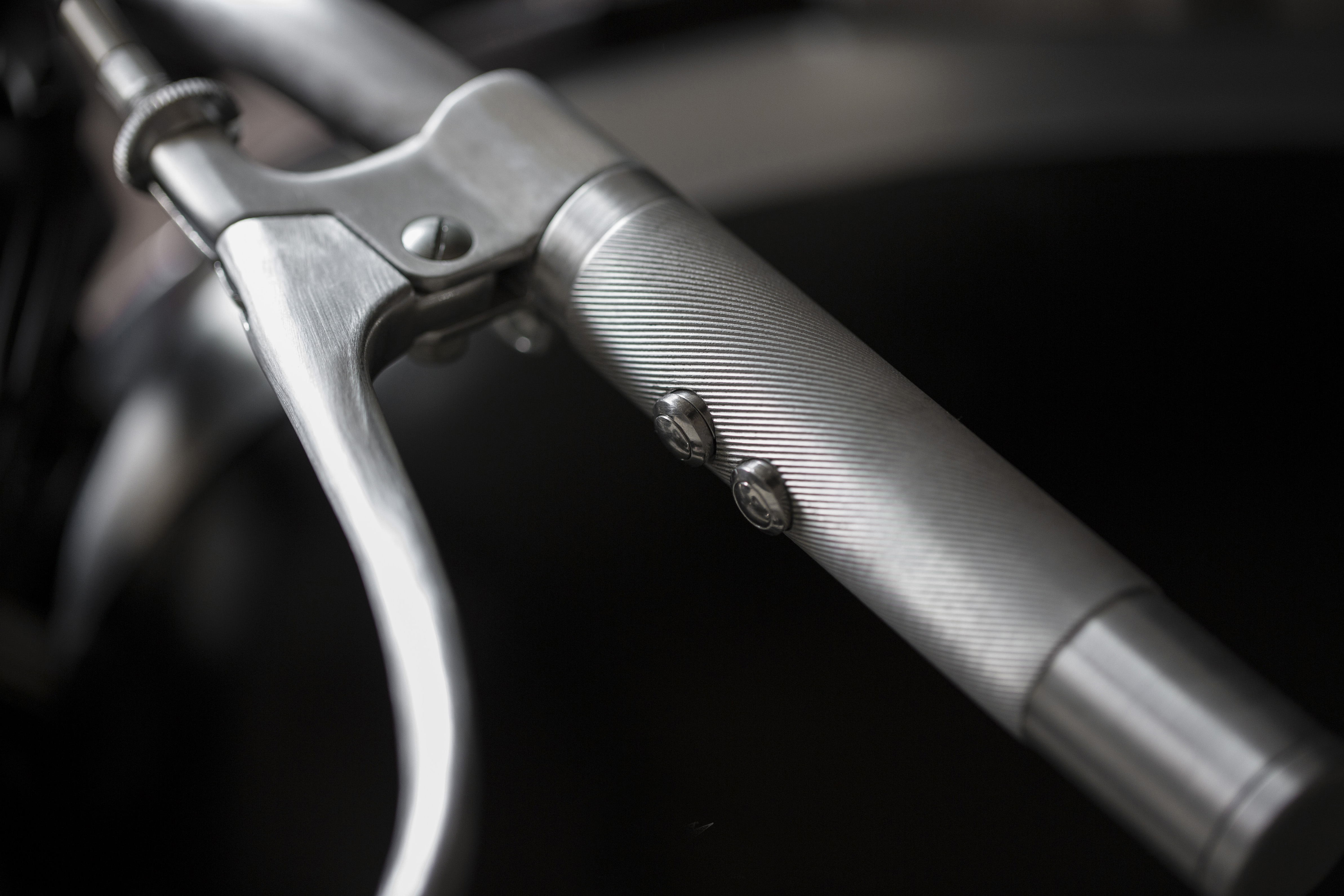 Beauty is not skin deep, it goes all the way into the engine, which now sports a gas flowed cylinder-head and injection remap, with the fuel pump and injection system being uprated. 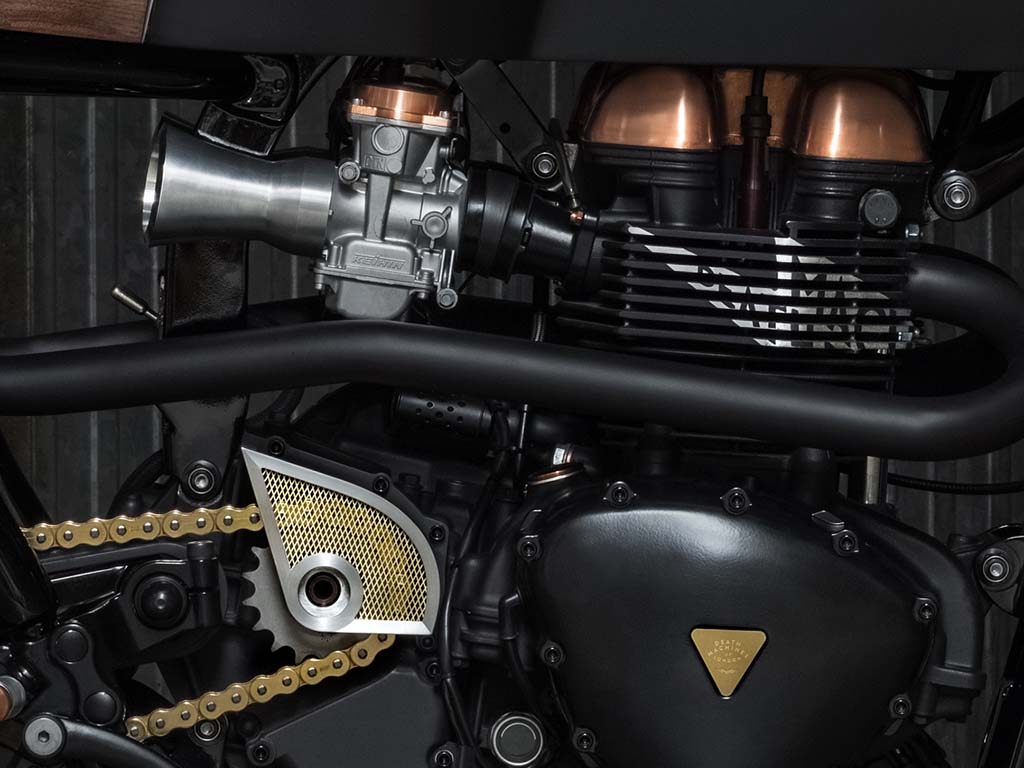 Surprisingly the ugly KTM oil cooler has been ditched, something last seen on the Hammarhead Jack Pine though never repeated – but I’m sure DMOL know their stuff, reiterating it can be done. 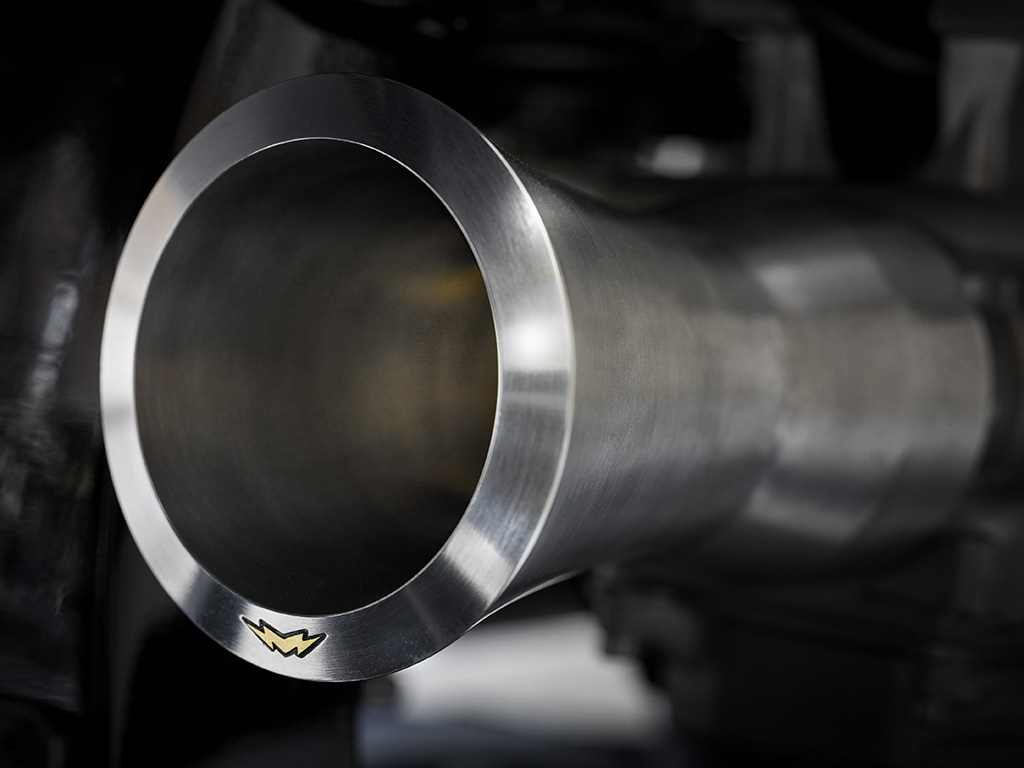 The EFI injector caps, like the cam covers have been copper plated, with the injectors then receiving a set of custom made brushed alloy velocity stacks, developed to assist the Triumph Twins EFI remap. 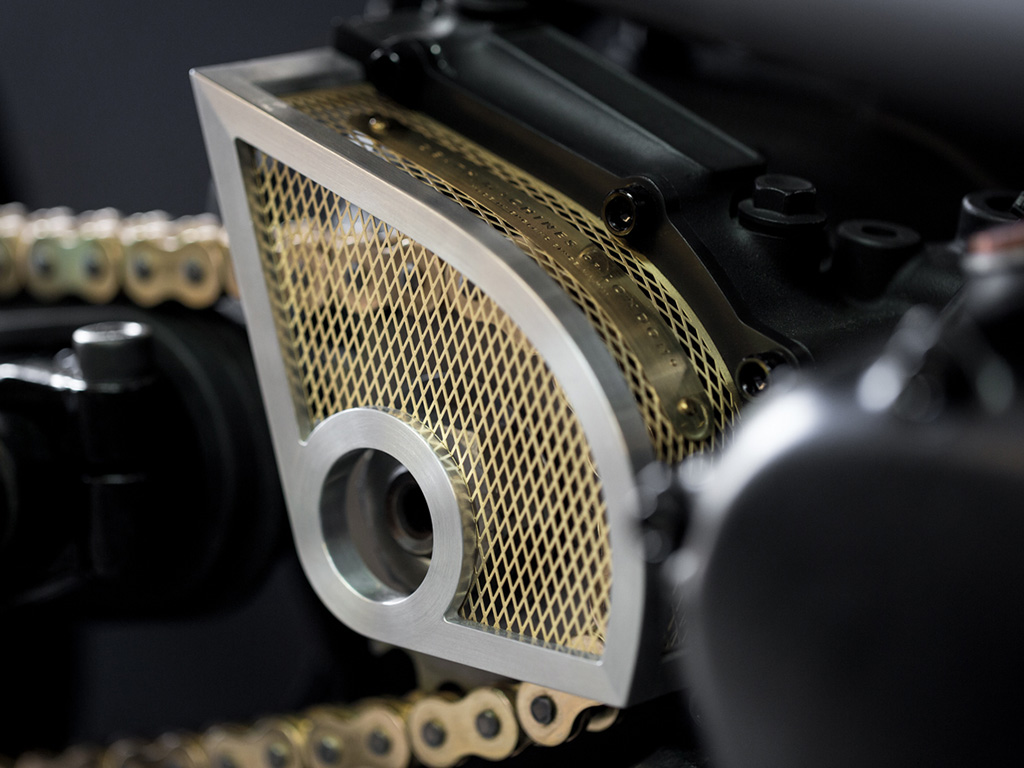 The engines side covers were black powder-coated, before the whole lots was finally crowned with a solid brass DMOL’s sprocket cover. 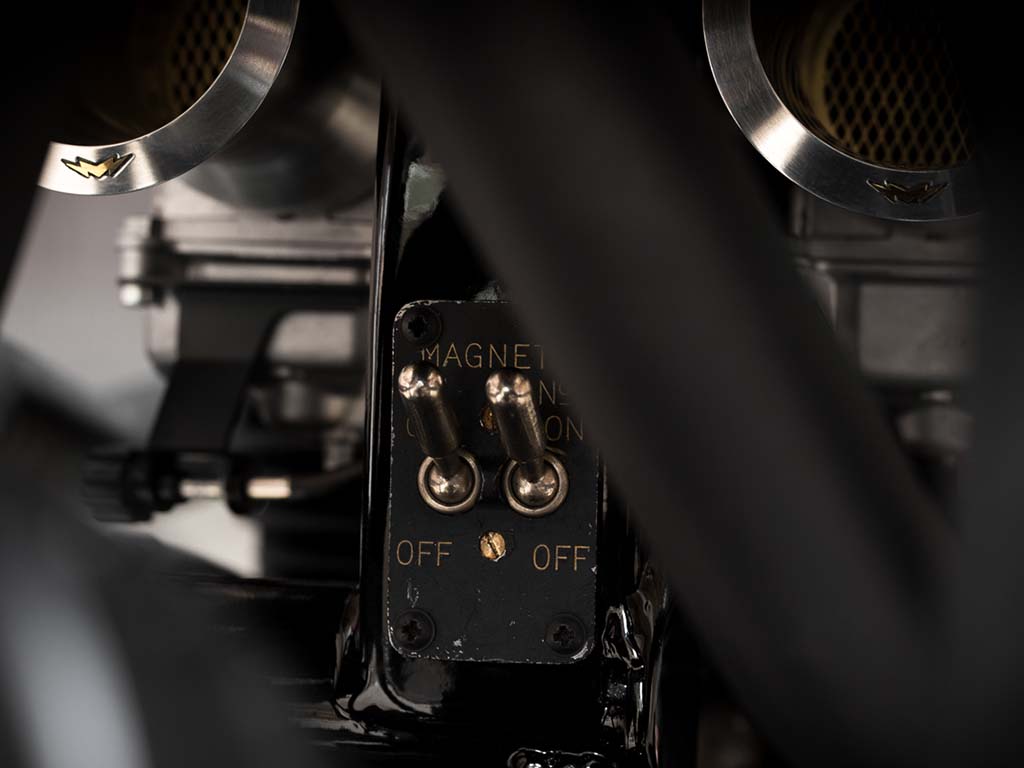 This Thruxton has a very unusual way of getting running and involves an unrestored starter switch from a Spitfire…. thats not a Triumph Spitfire, but one from a 1940 Supermarine Spitfire. It works by turning the first switch to the ‘ON’ position, making the Triumph  live, you then turn the second switch to ON, engaging the starter motor…. now just how cool is that!!!  As can be clearly seen the air/battery box is gone, so that now homeless battery has been relocated to under the bike between the foot pegs. 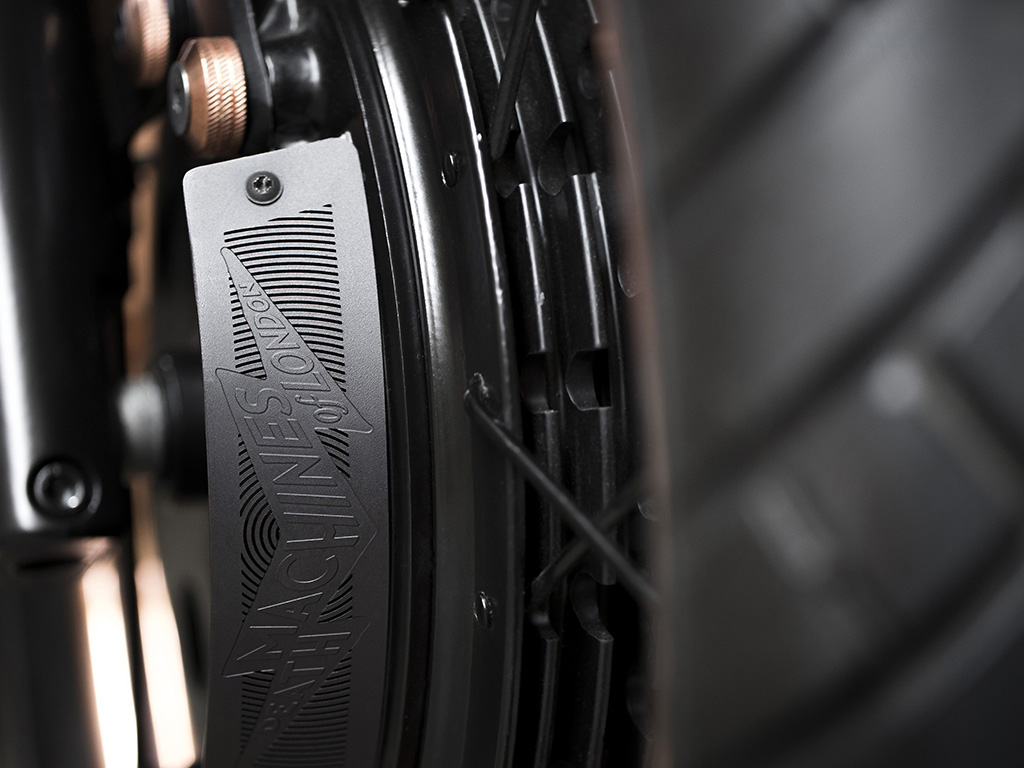 The Triumph Thruxton sits on a 19” front wheel with a Fontana drum brake,  a brake developed by Daniel Fontana in the 1960’s – with the rear being  a  17” Harley rim on stock powder-coated hubs. Both rims were electroplated copper before being laced in-house and shod with a set of Avon trail rider tyres 100/90 x19”, 160/60 x 17”  respectively. Finally the suspension has had an upgrade with the front receiving  re-valved internals uprated with progressive springs, with the rear getting a set of Hagons 20mm longer than stock.

For full details on the build check out the website here