What a pisser…. And why didn’t I powder coat, well I don’t really like powder, but thats exactly what I did next, I wasn’t going down the paint route again that was for sure. I also had a feeling that the red frame idea may be unlucky, so I decided to abandon the idea of the Johnny Dare bike and go for something similar…. more subtle….

It was January of 2012 when I took my flaking bright red frame to Goldburn finishers, who have plenty of experience with powder coating motorcycles frames, remembering to block up the holes and making sure you can still see the frame number…. very important, as if you cover it up you won’t pass your MOT here in the UK. I picked the frame up a few days later and finally started the dry build with fingers crossed. 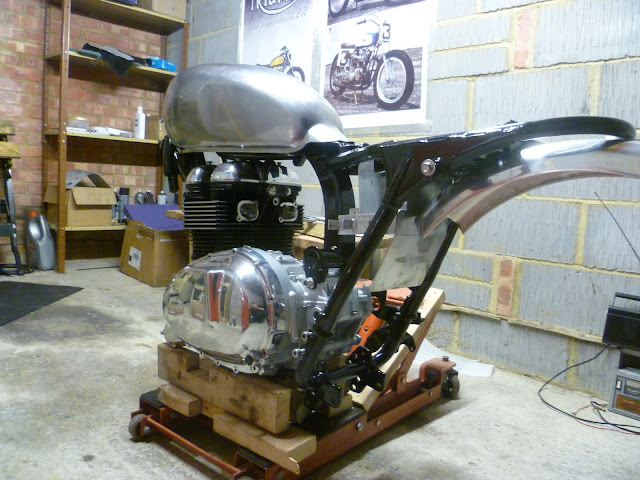 The inspiration this time for the finished bike was a bike owned by a friends of Wes and Four Aces Cycle Supply. It was one of my all time favourite Triumphs, and one of the two bikes that started my love for the ‘Desert Sled’. 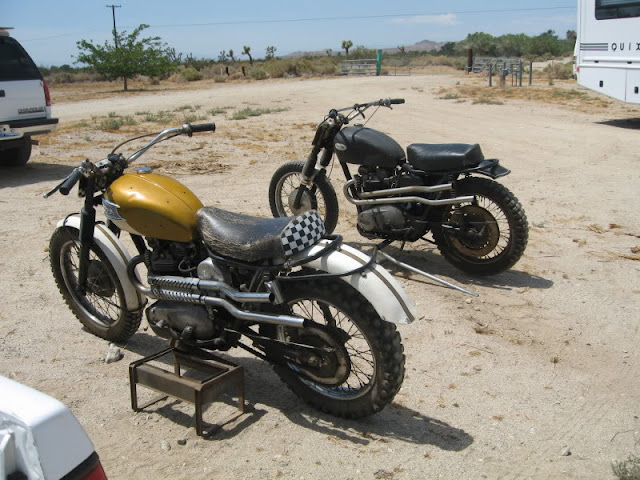 One problem was now had to undo all the work I had put into stripping that petrol tank. I no longer had any faith in painters so I set about doing the work myself. I didn’t have to worry about doing a top notch job as I wanted the finished tank to look a little weathered, as if it had been ridden in the deserts of Arizona. Once the paint was dry, I set about rubbing it down again with wire wool. The finished effect, in my opinion looked the bloody business!

During the build I had to source a few replacement parts including second hand rear brake calliper as the original item was frozen solid. A big problem with the original rear calliper is its position, low under the swing arm were its gets a good coating of grime. I gave the replacement caliber a good service, replacing just about everything. While I was at it I also gave the front caliber the same treatment.

To prevent the same thing happening again I purchased the UpNOver bracket from Triumph Twin Power which moves the caliber to above the swing arm, with obvious results. Next up was to get the stock wheels re-shod with the super knobbly Continental TwinDuros. I stuck with the original wheels after I priced up getting a set of new lighter wheels and hubs…. not something I could afford at the time.

It was early July of 2012 and the Sled build was now really coming together. With the bike firing up again on the 21st July. The bike now started an stopped, though it was pretty loud as the exhaust was the original item cut down…. and then we moved house!. This put a real spanner in the Desert Sled build. As the new place didn’t have a garage, or in-fact anywhere to keep a motorcycle. So the bike was shipped off to my mums where it sat for a year. I popped over on the odd weekend visiting my mum and doing a few bits on bobs, but the build didn’t see much progress for another 18 months.

In February of 2014 my poor old mum died. She was diagnosed with cancer in October of 2013 and passed away five moths later. One thing said to me before shed died was for me to ‘get that bloody bike finished’. Something that was far from my mind at the time and had been since the year before. So in 2104 with y mums words in my mind thats exactly what I did, I think it helped at the time with dealing with losing my mum and gave me something else to focus on. A month later I also received an invite for the bike to be put on display at Triumph Live, so now I also had a date for the bike to be finally finished. Time to get a move on 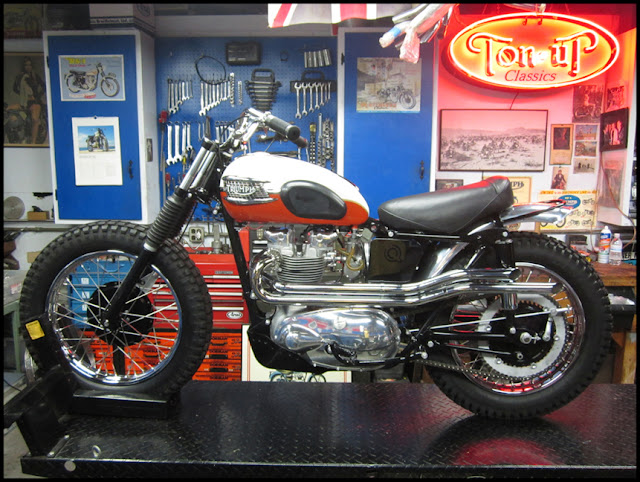 First off was the exhaust, I didn’t want to get off-the-shelf pipes, wanting the Sled to be a little unique when compared to other custom Triumph. So the bike was shipped off to the guys at Co-Built with instruction to make a set of pipes to resemble those fitted to a red and white desert sled I had found a picture of some years before.

On the Sled return I set about the doing the finishing touches including making a seat to resemble a Bates Scrambles seat which I had finished off  in black leather. There was a whole list of goodies that I had been storing in boxes at home that were now going on the bike, including parts from Motogadget, LS and Joker Machine and crowned with a set Keihins Carbs. Then one day, after two years…. the Sled was finally finished.

The Sled flew through the MOT without an issue. Now there was now no reason not to take the bike out for a blat around the local country roads. And by god did those pipes sound the business, paired with those carbs the bike had a little bit of grunt, this bike was amazing!!

The whole build had been a slog, good times and bad times, but finally the bike was done, though with plenty of with mixed emotion. A lot had happened in two years. I had lost my mum, moved home twice as well as being made redundant twice!

A few days later I managed to put a dent in the petrol tank, I think it was a reminder that nothing in life is easy. A new tank was found, though in black. The bike was shown at Triumph Live and received plenty of admiring glances. I was glad the bike was done, I think at the time, so was I.