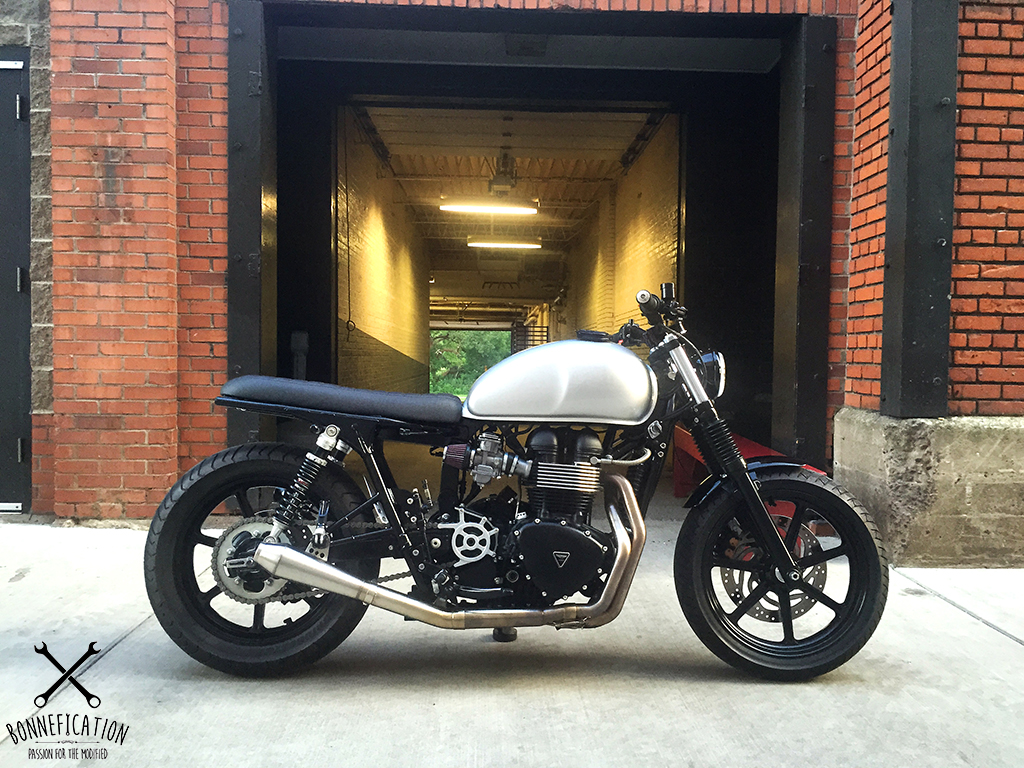 There are few individuals who have made as bigger impression on the Custom Triumph Twin scene than Go Takamine. I say the ‘Triumph Twin Scene’ in particular but Go Takamine influence goes far beyond the Triumph and into this whole ‘New Wave‘ custom motorcycle scene which has claimed him. You may ask why is this guy so influential, well Go Takamine is the man behind the Tokyo based bike builders ‘Bratstyle‘. For Bonnefication like many it was the bikes seen on the ‘Bratstyle’ website that really got the Bonnefication ball rolling back in 2008/9. 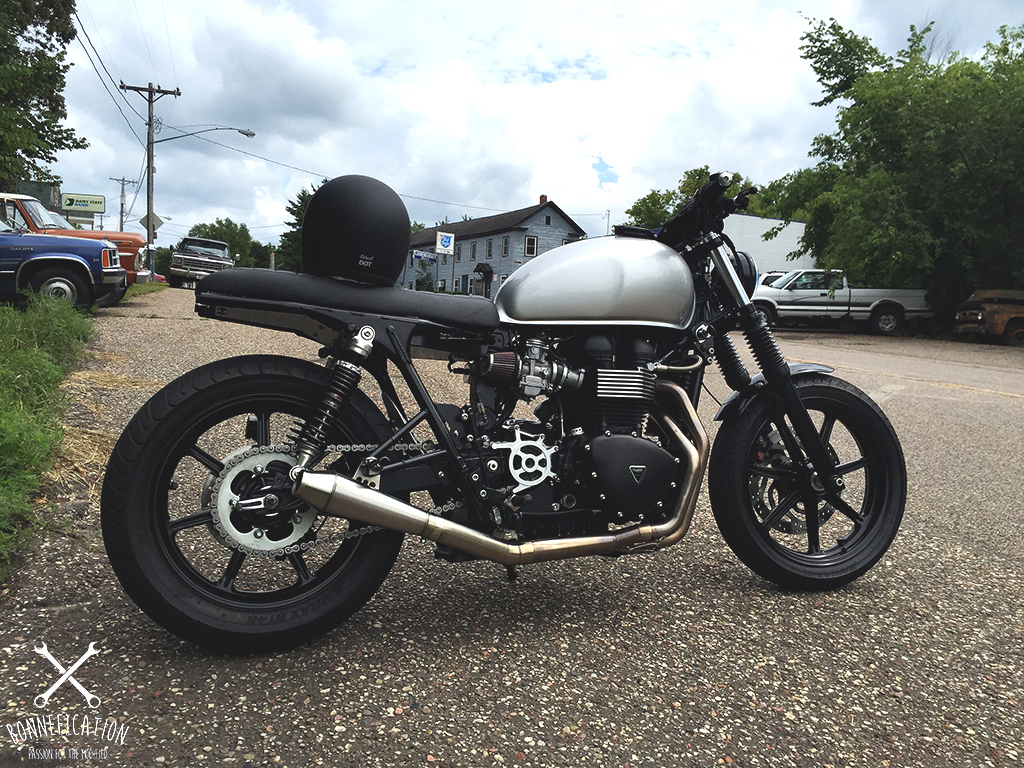 For Matt Holmgreen it was the influences of Go Takamine’s work and many hours spent looking through the pages of Bonnefication which inspired him to build his own Brat Style Triumph. Matt describes himself as an artist in life and a mechanic by trade working for a local Honda dealership in Eau Claire Wisconsin, which Matt describes as ‘Harley Central’… a bit like the Bournemouth then really. 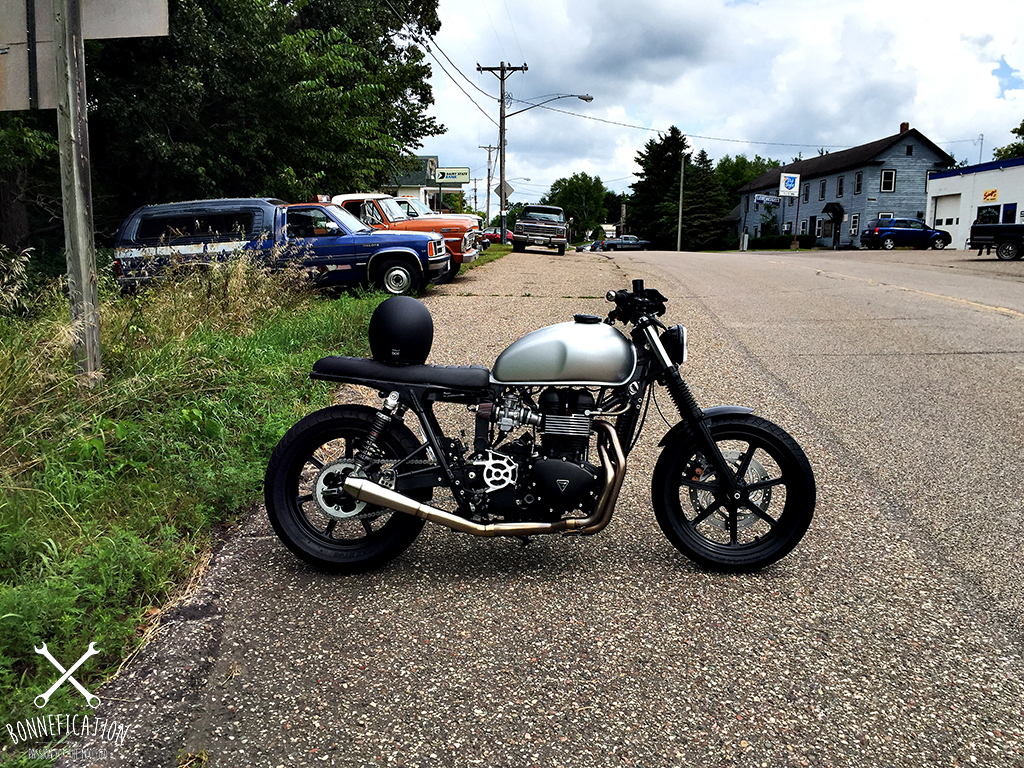 In 2009 Triumph introduced the 19” cast wheels on the Bonneville, which was Triumph’s nod to Triumphs late seventies styling. Though not as popular as the spoked wheeled machines the cast wheeled Twins handled better at lower speeds, effectively lowering the bike by almost and inch. For Matt this was the perfect starting place for his build, as he admits he prefers the Mag wheeled bikes over the spoked wheeled alternative. 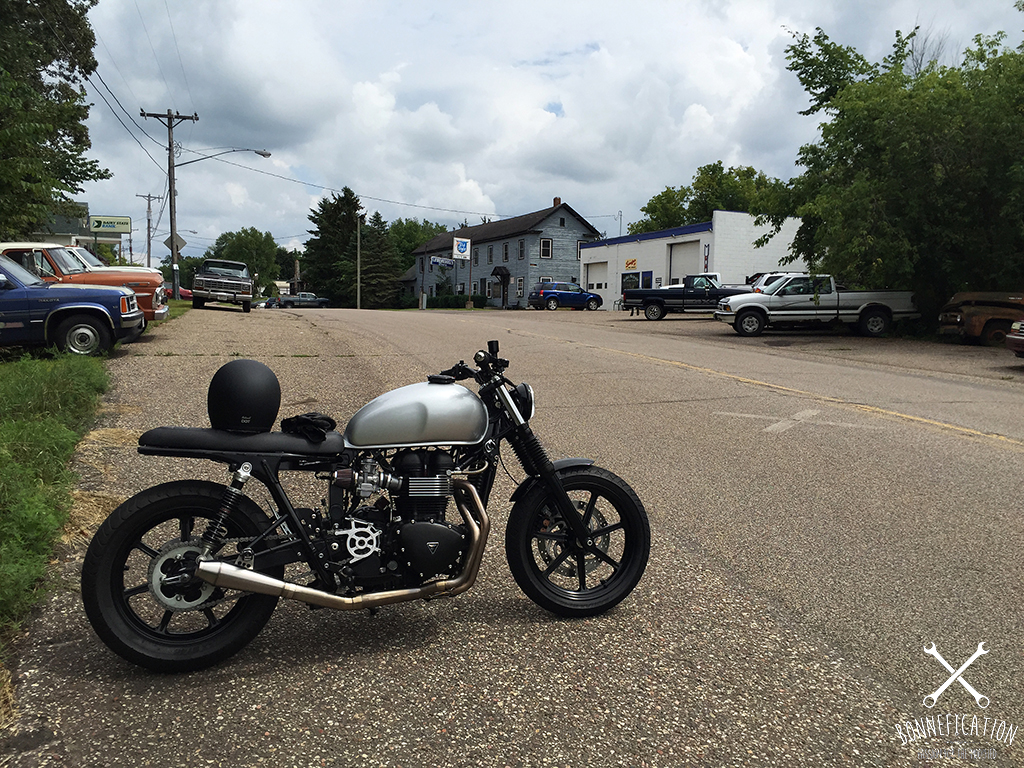 Matt striped the Bonneville down to the frame and motor. A key point for Matt was the removal of the air/battery box leaving an open frame giving and giving the Triumph that stripped down appearance. Matt fabricated a couple of battery trays in alloy before the right look was achieved. 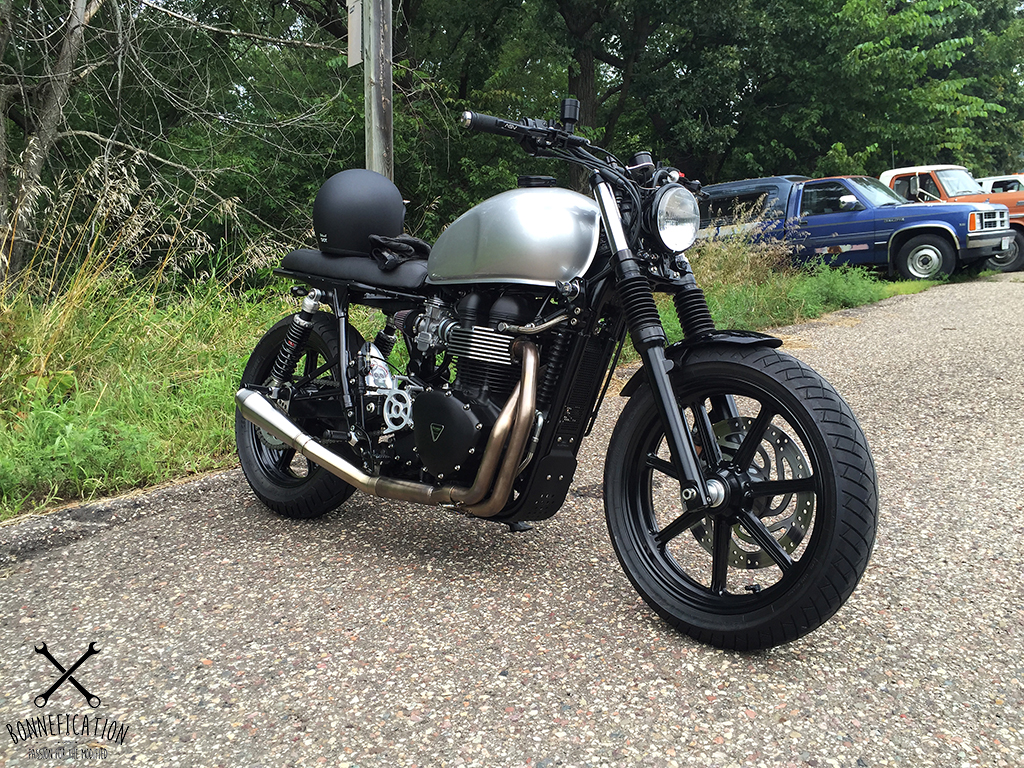 When going for the open frame, relocation all the electrickery and then battery into a more discreet box can be a bit of a chore, which Matt admits was time consuming, but not hard. While he was at it Matt also replaced the OEM rectifier with a Mosfet unit and relocated it to way under the bike – you can see the new rectifier where the centre stand would be, highlighted by a ‘Revival’ sticker. 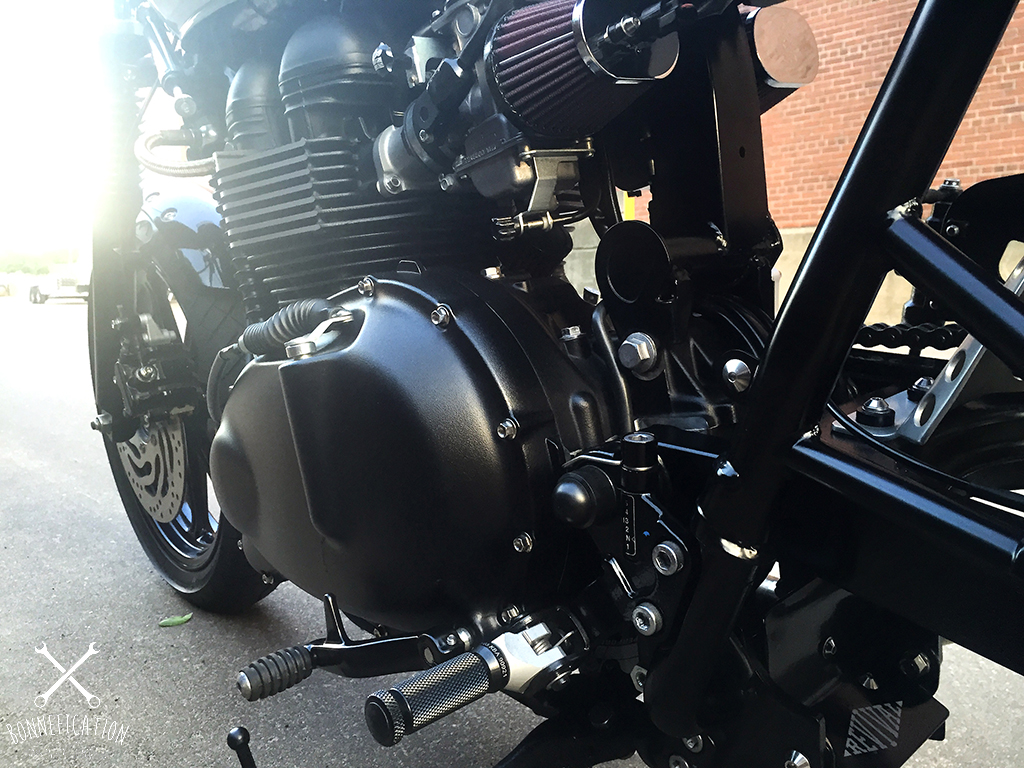 With the removal of the battery/airbox an alternative air filter needed to be fitted, Matt chose K&N Pods paired with Crone Engineering mufflers fitted to TEC headers which all will go a long way to improving the Triumphs breathing and performance. Another issue with removing the airbox is that you lose a large chunk of rear mudguard, and no mudguard/fender eliminator is going to fix that. To solve the problem matt fitted an custom alloy wheel hugger, bolted to the swing-arm and job done.

To improve handling Matt fitted a Steering dampener, upgraded the stock rear shocks to YSS units with progressive springs at the front. The tires are the Bridgestone Battleaxes which have been fitted to those all important cast wheels.  At the front of the bike are Renthal Fat bars and Risers which have been fitted with the stock switches, ASV Shorty levers, CRG bar end mirror all topped off with a Free Spirits front Brake reservoir which fortunately Matt is qualified fit under Free Spirits T&C’s, as he is a mechanic (no really!). 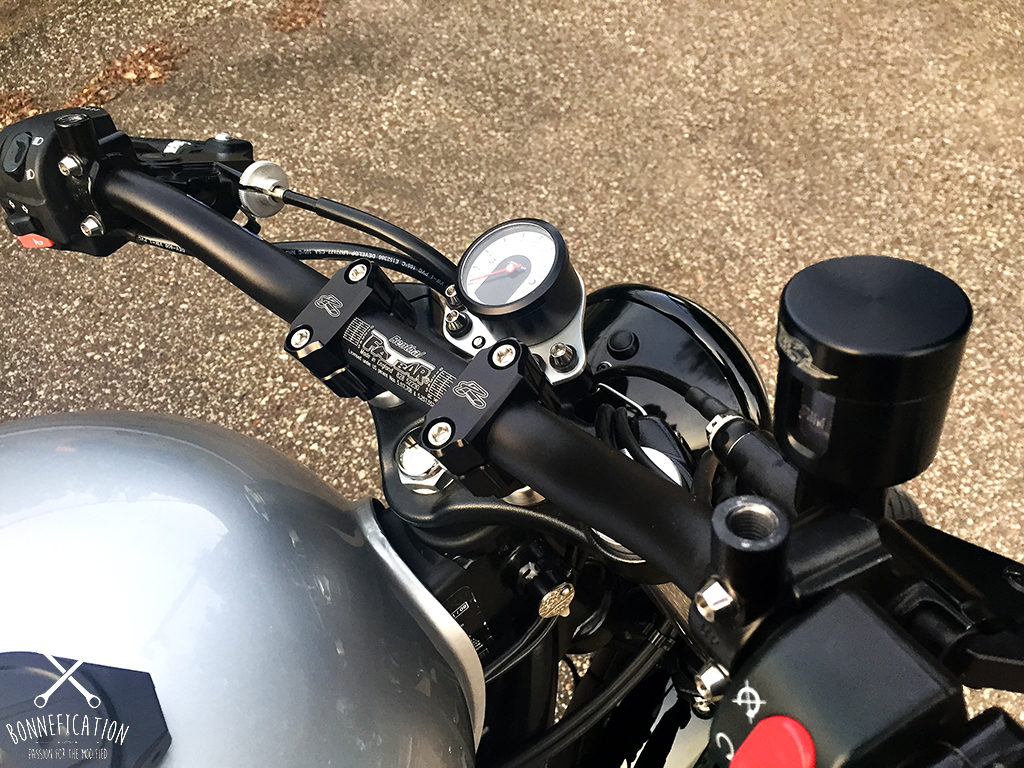 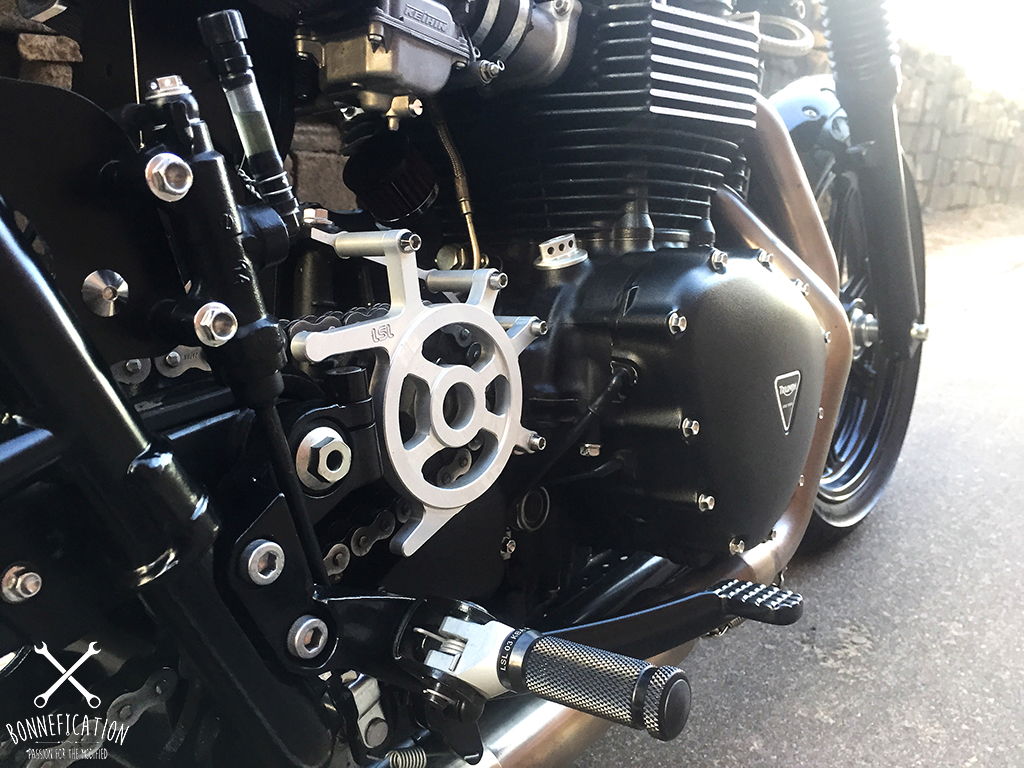 To finish the bike off Matt fabricated a new seat base which he had covered before turning to the Honda garage where he worked for the colour of the petrol tank, opting for a custom mix of Honda Civic, Vogue Silver metallic topped off with a Joker machine tank cap. 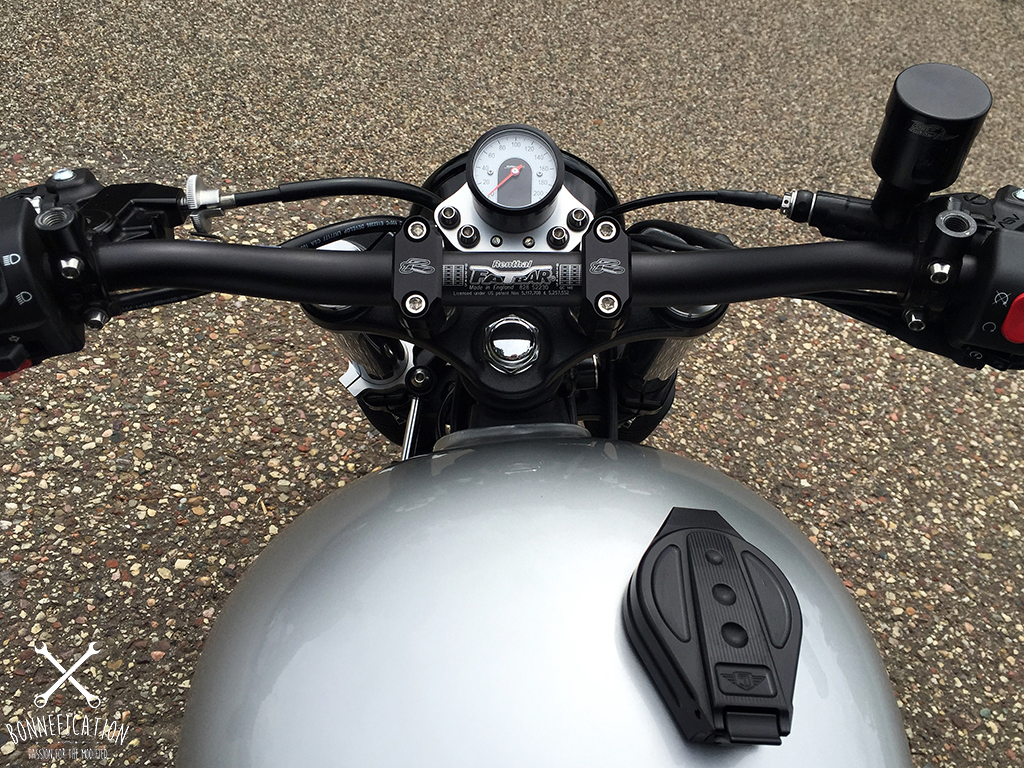 I think we can all agree that Matt has built a very nice Brat-Style Triumph Twin, something which Matt wishes to do more of in the future, with an idea of building custom bikes full time under the banner of Black Cloud Motorcycles. Matt describes this bike, his first, as Black Cloud #1 and is currently working on Black Cloud #2 which is destined to be a Cafe Racer. I think if you are in the Eau Claire Wisconsin area and are looking for someone to build you a bike, you should get in touch with Matt at Black Cloud Motorcycles. 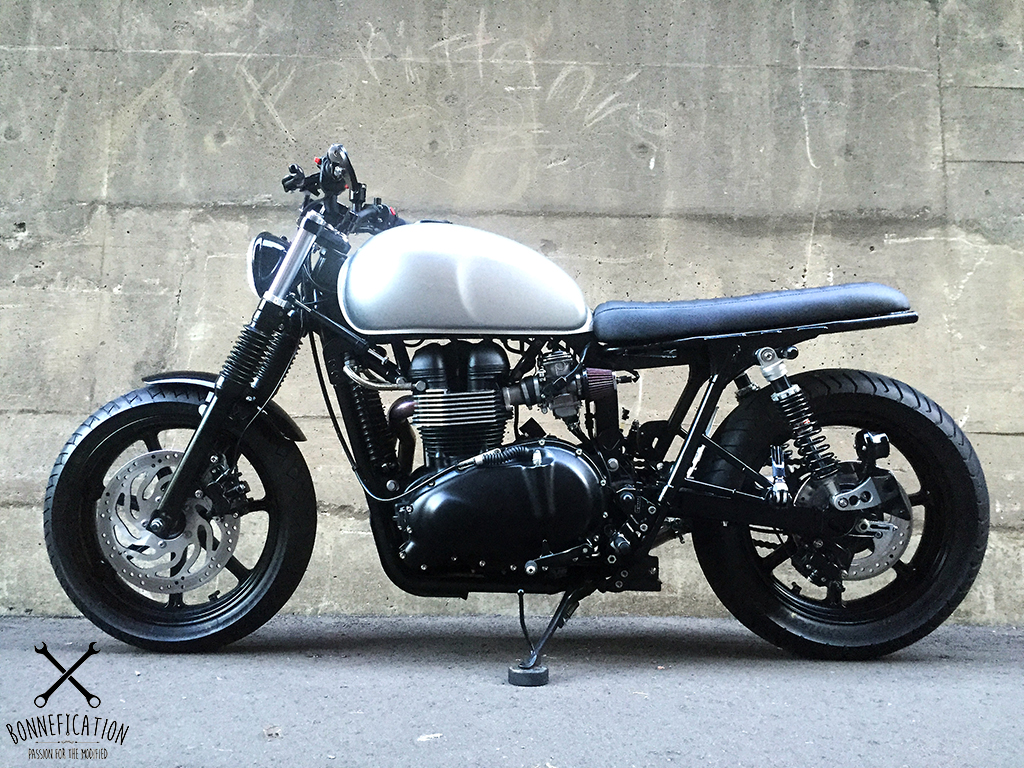 If you have built your own custom Triumph Twin, why not get in touch.