If you have noticed my own project over on In the Shed you may have noticed the paint job, so when I received an email from James Sherrod of Barn Find Paint it caught my interest…..

My name is James Sherrod, I currently own two British motorcycles. One is a 1970 Norton Commando that I just acquired about ten months ago, (ironically a barn find) , and the other is this 2001 Triumph Bonneville.

The Triumph started out as the Scarlet red and silver combo. As with most of us I wanted a bike that was uniquely mine, I wanted my bike to stand out from a crowd so to speak. 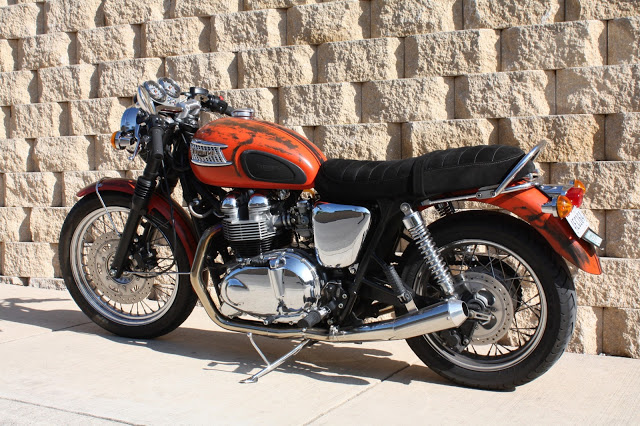 The Bonneville’s classic lines, in my opinion, lend itself completely to this style of paint job.
I started out as an aircraft painter for a number of years and then I jumped over to interior and exterior architectural coatings where I learned a number of different faux finishes. One day I decided to blend the two worlds and craft a look for my bike.

It’s an interesting creative process for me because I like to come up with a back story so to speak, for every paint job. 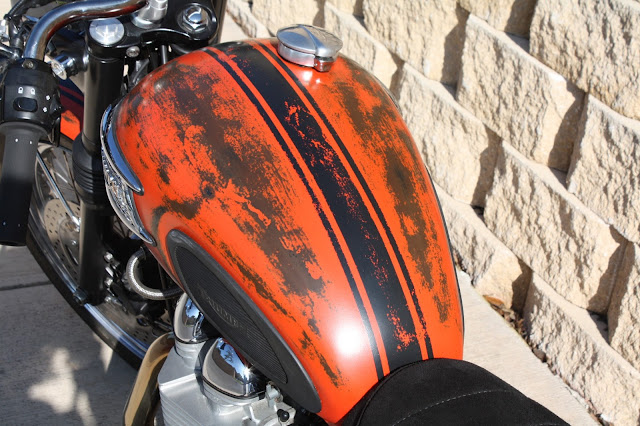 The orange and black bike was an old cafe racer that belonged to a rambunctious young soldier, who upon returning from the Vietnam war celebrated life by travelling from the east coast to the west coast on his Triumph Bonneville. Along the way, the paint job collected nicks and scrapes like badges of all the places it had been and all the adventures it had been pushed thru. Until finally both rider and bike had seen enough, and the now “family man” settles down.The bike was placed in a shed, where times elements take their toll on the resting bike. Until it is discovered many years later while the mans surviving children are cleaning out the shed or barn. 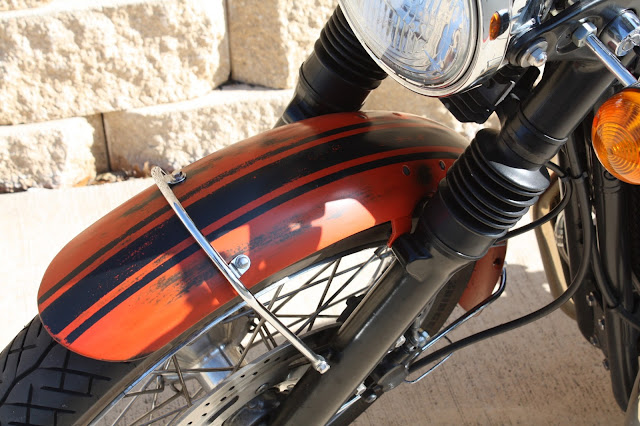 Like scares on the human skin, there is a story or adventure behind every nick,scrape or worn area of paint. Having bought a couple of bikes that have literally been pulled from sheds I know that every bike like that has a similar story. Who rode this bike? Where has it gone? What has it seen? There is a responsibility to the legacy to these bikes. I like to think my paint jobs recreate that.
I have a couple of different tin sets for this bike.The Bonnevilles’ is rather simple to change over.
My company Barn Find Paint (www.barnfindpaint.com) sets up the paint jobs and I like to make sure each paint job is unique, just like the owner of the bike. 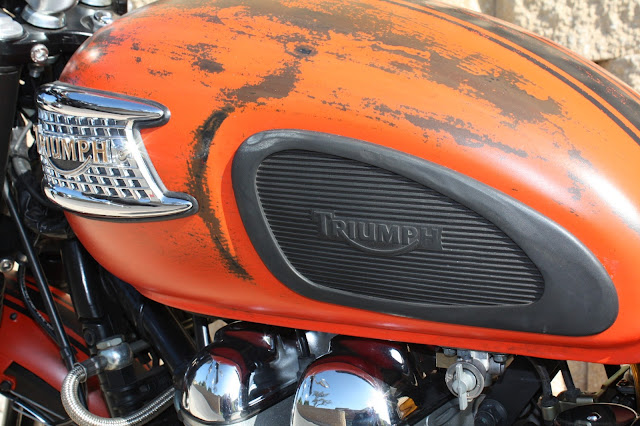 As I said my Bonneville is a 2001. It is Hugger orange with a jet black racing stripe.
It has a complete D&D exhaust system,re-jetted carbs, Nology coil,k&n air filter, Norman Hyde M bars, chrome side covers, Lucas style turn signals and brake light, and a black suede seat. And besides the seat, I have done all the work myself.