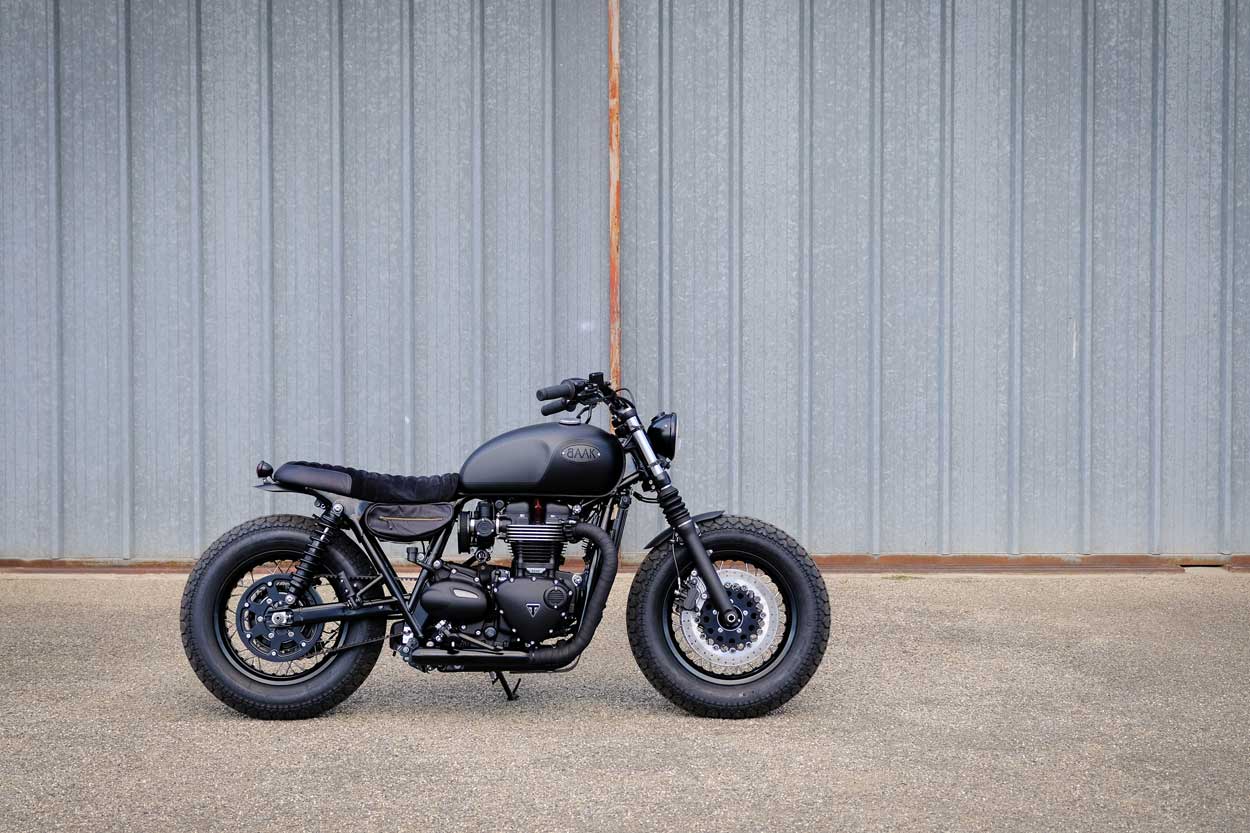 Over the last three years, Bonnefication has featured some incredible builds from Rémi Reguin of Lyon based BAAK Motocyclettes. With my personal favourite being Rémi’s stunning Bonneville Alliance, a classic air-cooled Triumph Bonneville T100 and Precision sidecar combo. 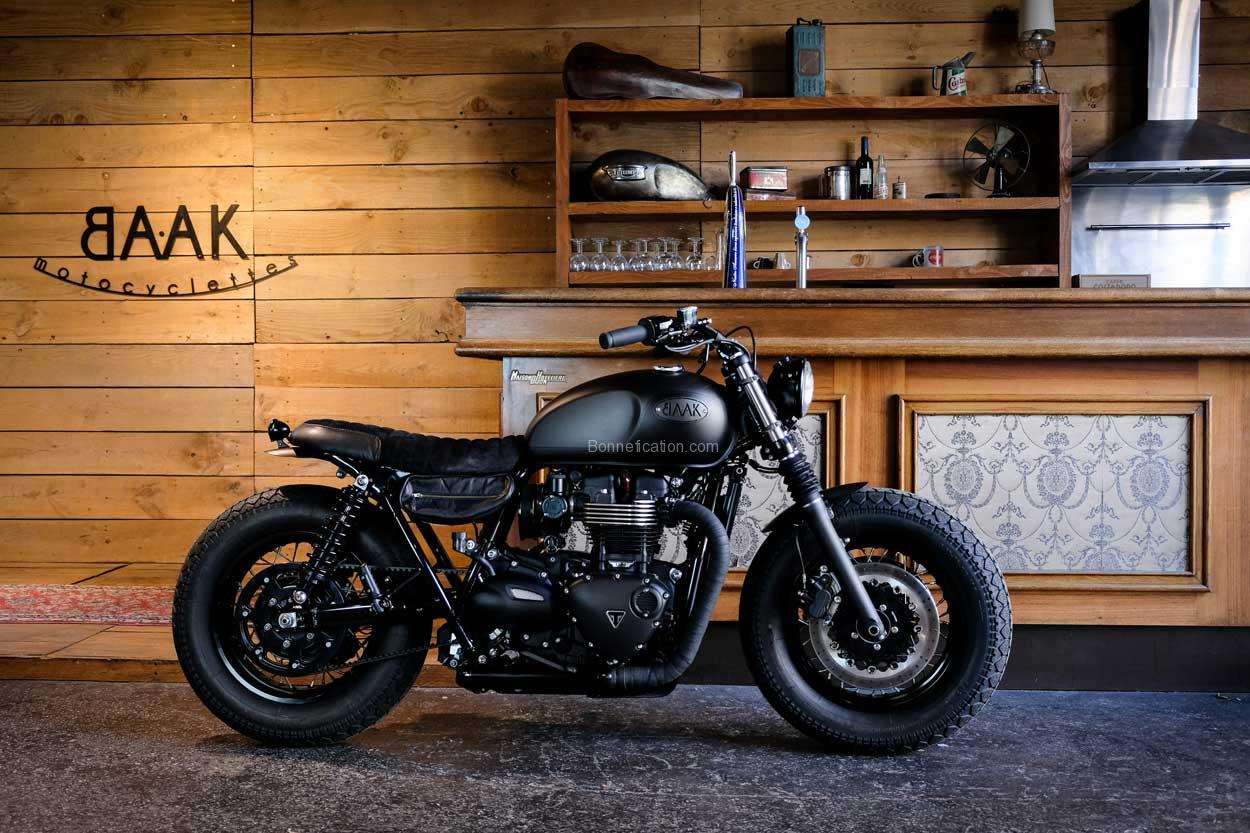 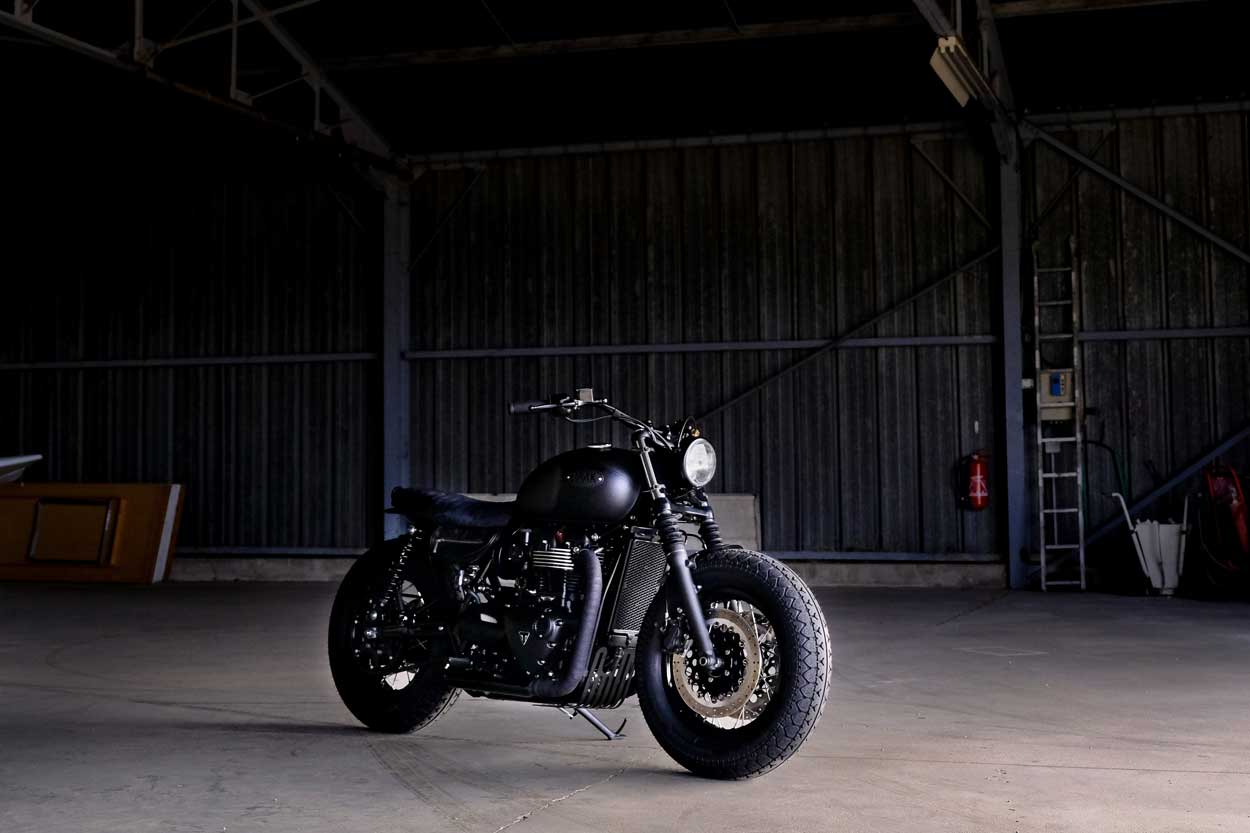 Based on a 2018 Bonneville T120 Black, this custom Triumph Twin was built to demonstrate ‘a radical manly look while bringing a particular care to the finish level’. With Rémi wanting to bring the ‘authenticity back to the original version’… …’calmed-down by the Hinckley engineers’.

With its all monochrome colour scheme the T120 Black was the perfect starting point for this build, allowing the BAAK team to ‘focus on the general shape and harmony of the dimensions than on the painting which is often subjective’. 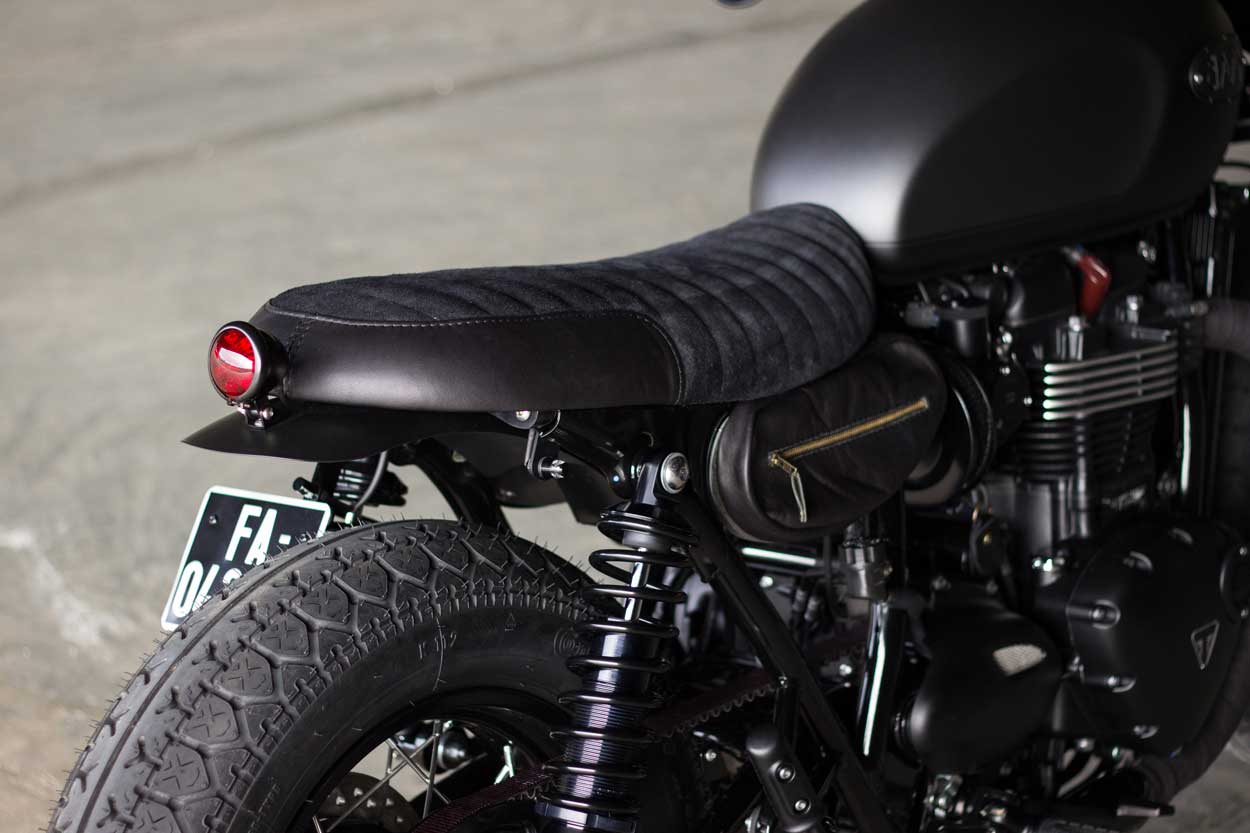 Firstly, BAAK’s off the shelf Short Seat Kit is fitted comprising of everything needed to bob a Bonne. Though the kit doesn’t include the minerals to cut off the back end of a perfectly good Bonneville, it does comprise of a machined aluminium subframe assembly. 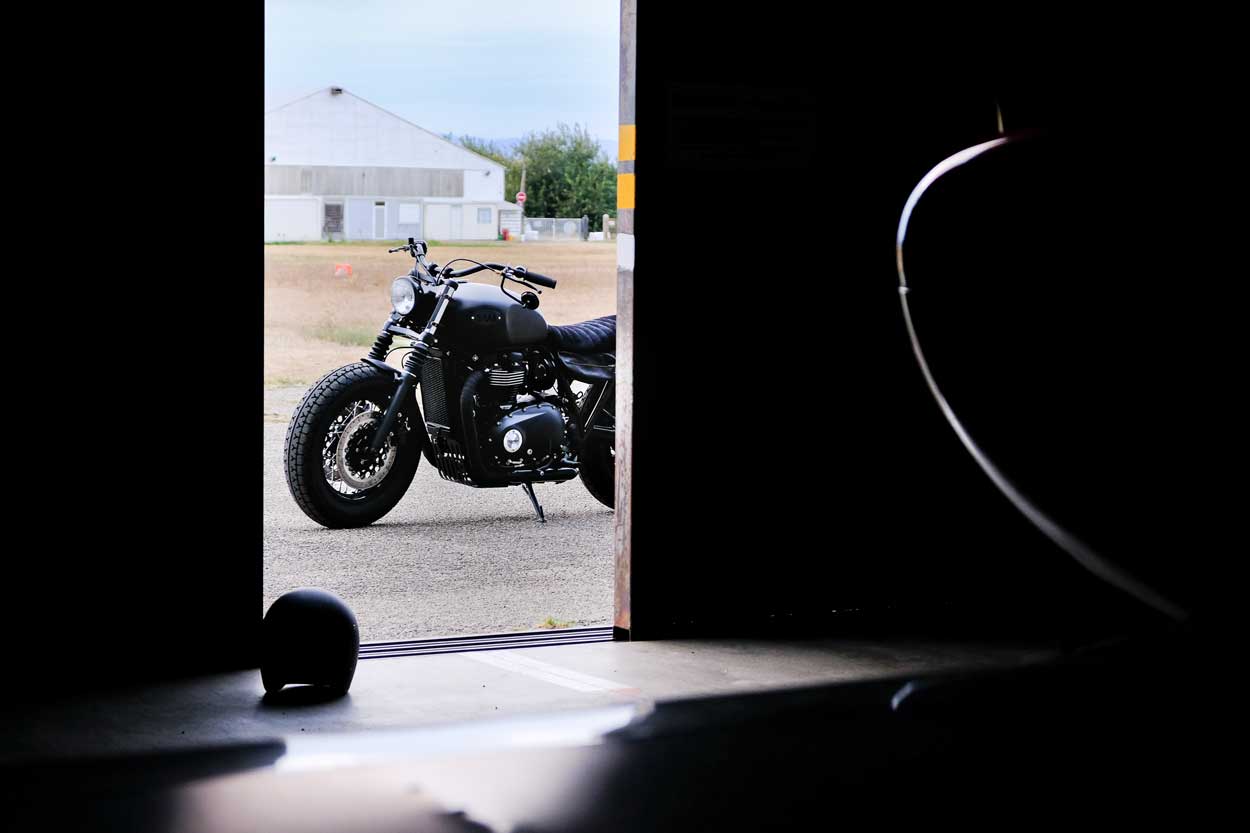 Along with a bobbed stainless steel mudguard, plate holder, Bates style LED taillight and the seat, which BAAK craft from high-density polyethylene, padded in 3 density foam, and for this build upholstered in black suede to match the T120’s tanks custom satin finish, which also wears a set of BAAK aluminium tank badges. 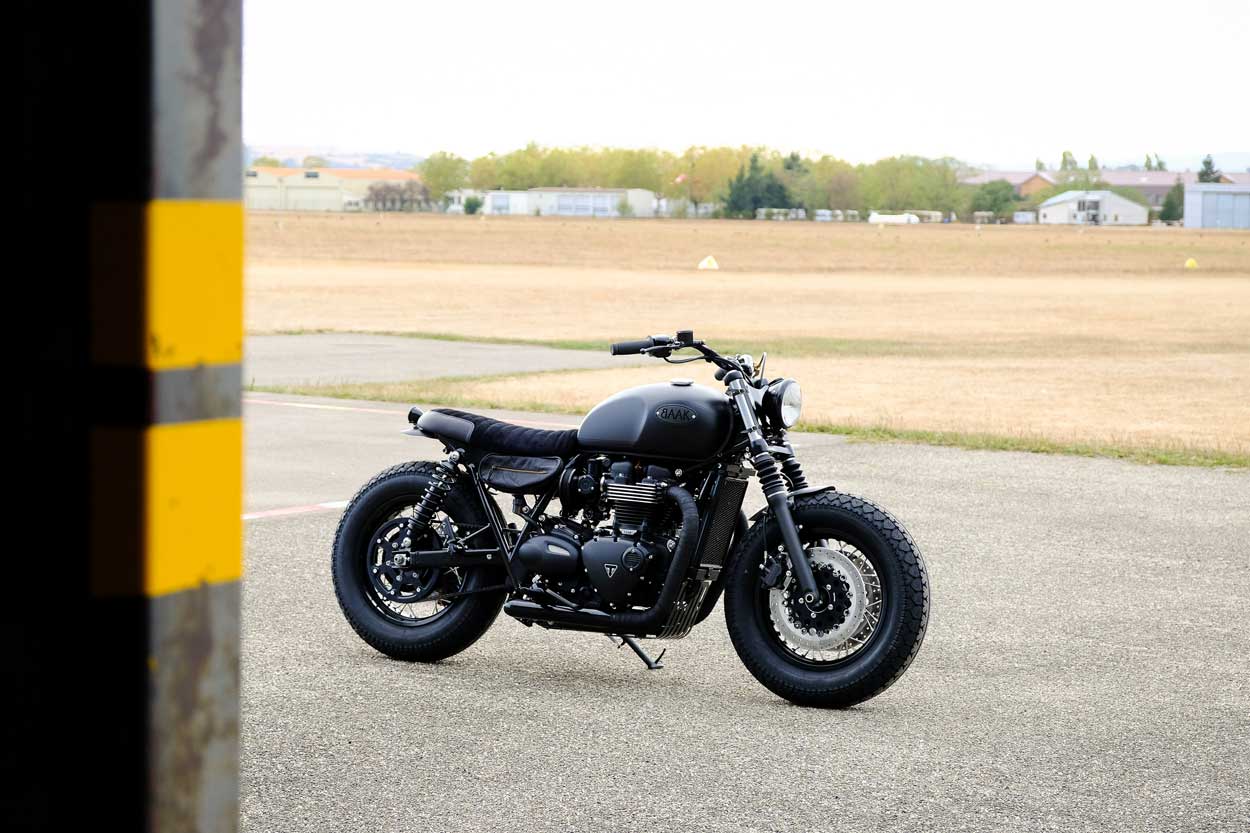 To keep the newly bobbed back end clutter free, BAAK’s own side mounted licence plate bracket fitted to the top of the left shock absorber. This handy kit comes with all the wiring to illuminate the plate and is 100% plug and play. 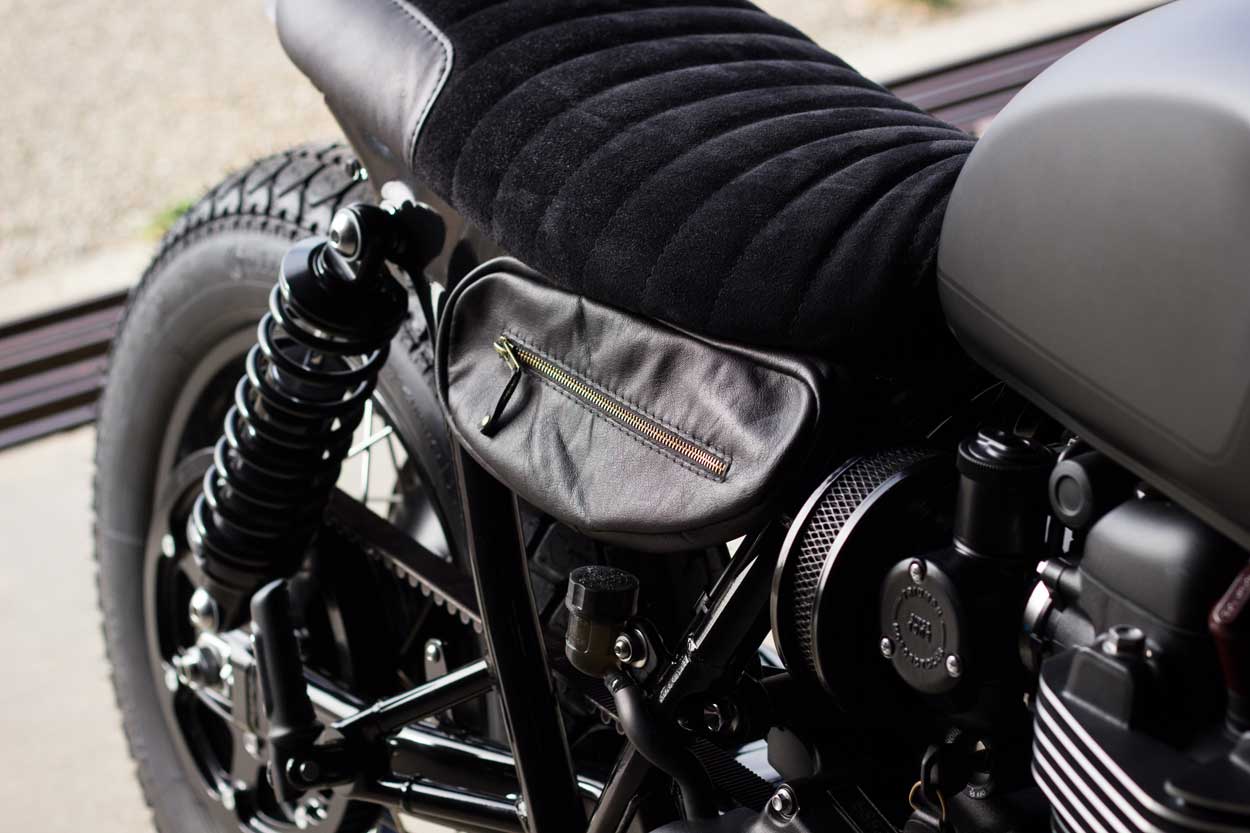 Under the custom seat, the air/battery box has been removed and replaced by a custom aluminium unit holding the Twins electrics and ignition. The void left after removing the air-box is now partially shielded from view by a pair of custom side covers crafted in aluminium and adorned with zip-up leather bags. 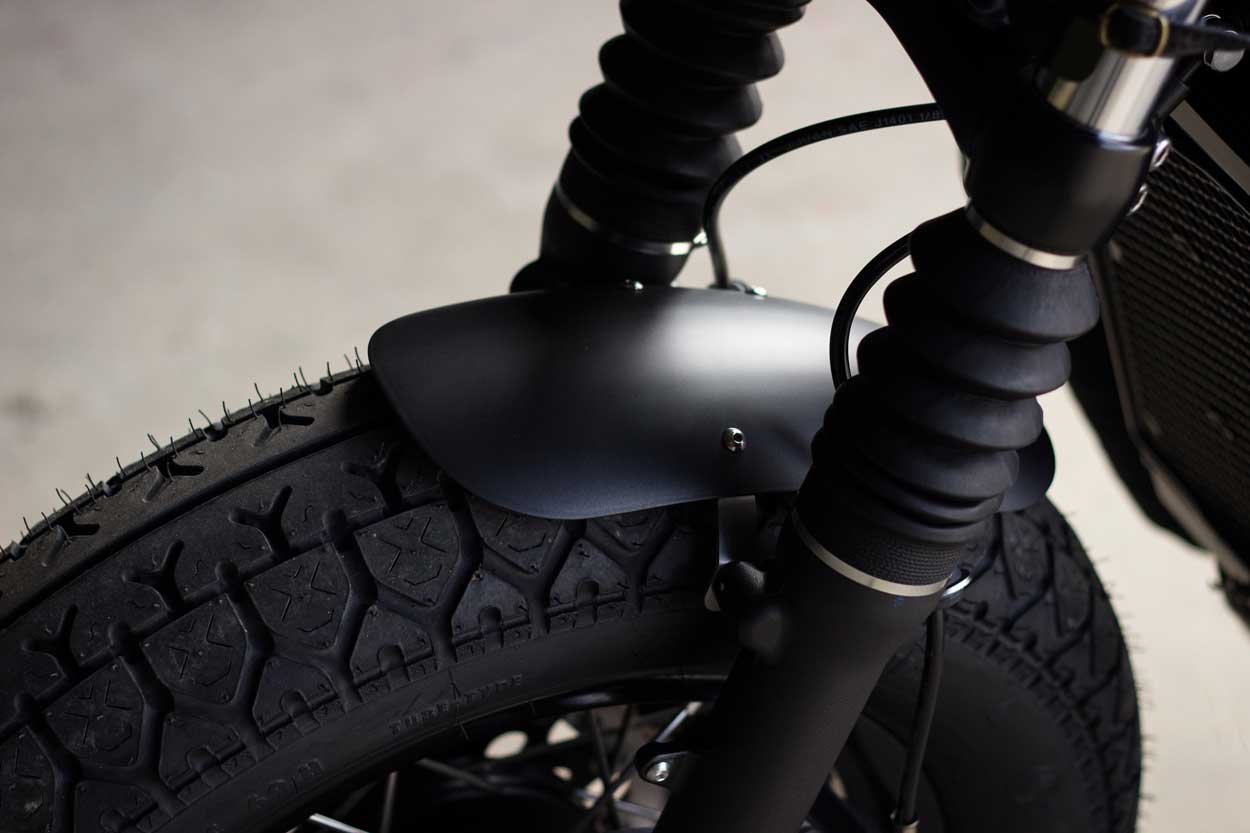 Above which is a BAAK N°1 handlebar (176mm (7″) high 796mm (31″) 159mm (6″) pullback) furnished with mini round mirrors, Kustom Tech brake and clutch levers and BAAK controls. With BAAK throttle body allowing for the continued use of the T120’s ride-by-wire system and features two buttons, with the left-hand switch featuring three buttons along with the turn switches. 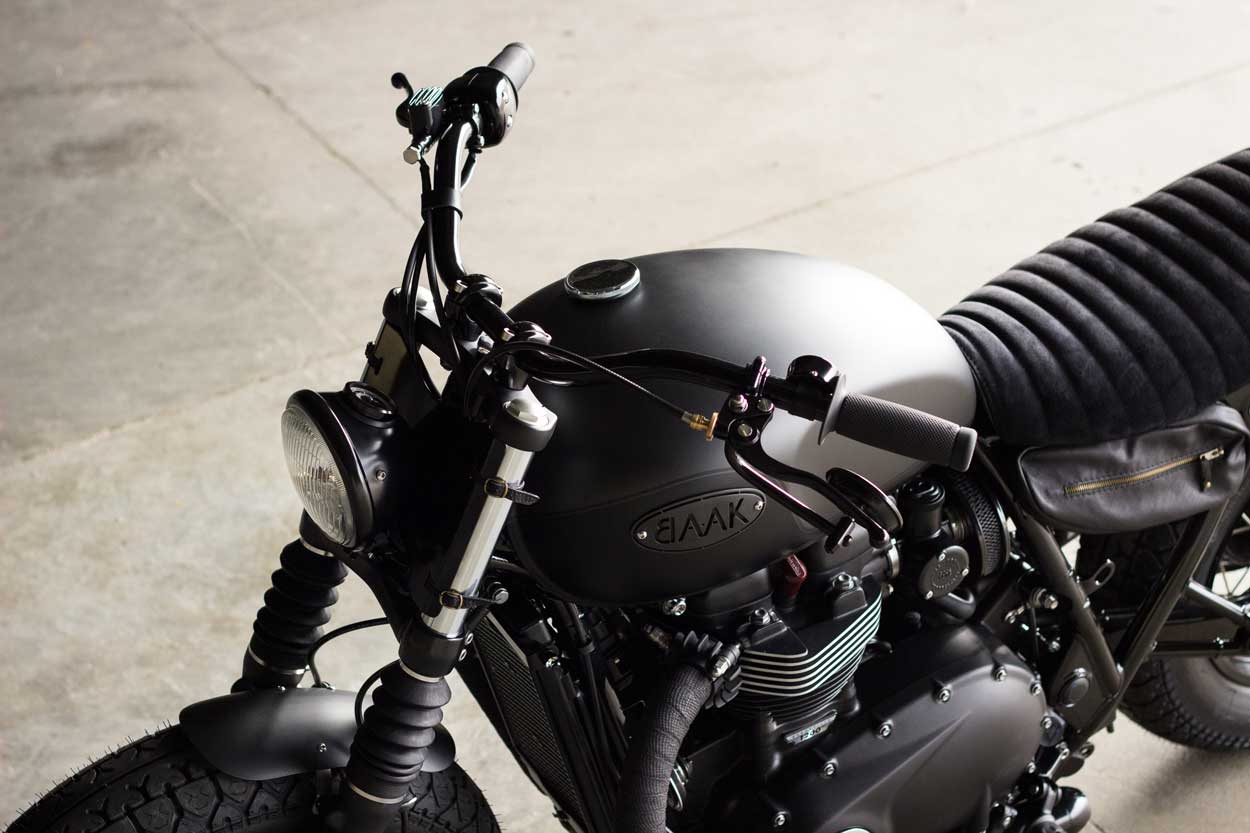 At the front of this T120 is BAAK’s Bates style bottom mounted headlight with integrated Motogadget Tiny speedo. Behind which sits a headlight plate secured to the forks via leather straps, this does the job of hiding the wiring which used to reside inside the stock headlight bowl.. 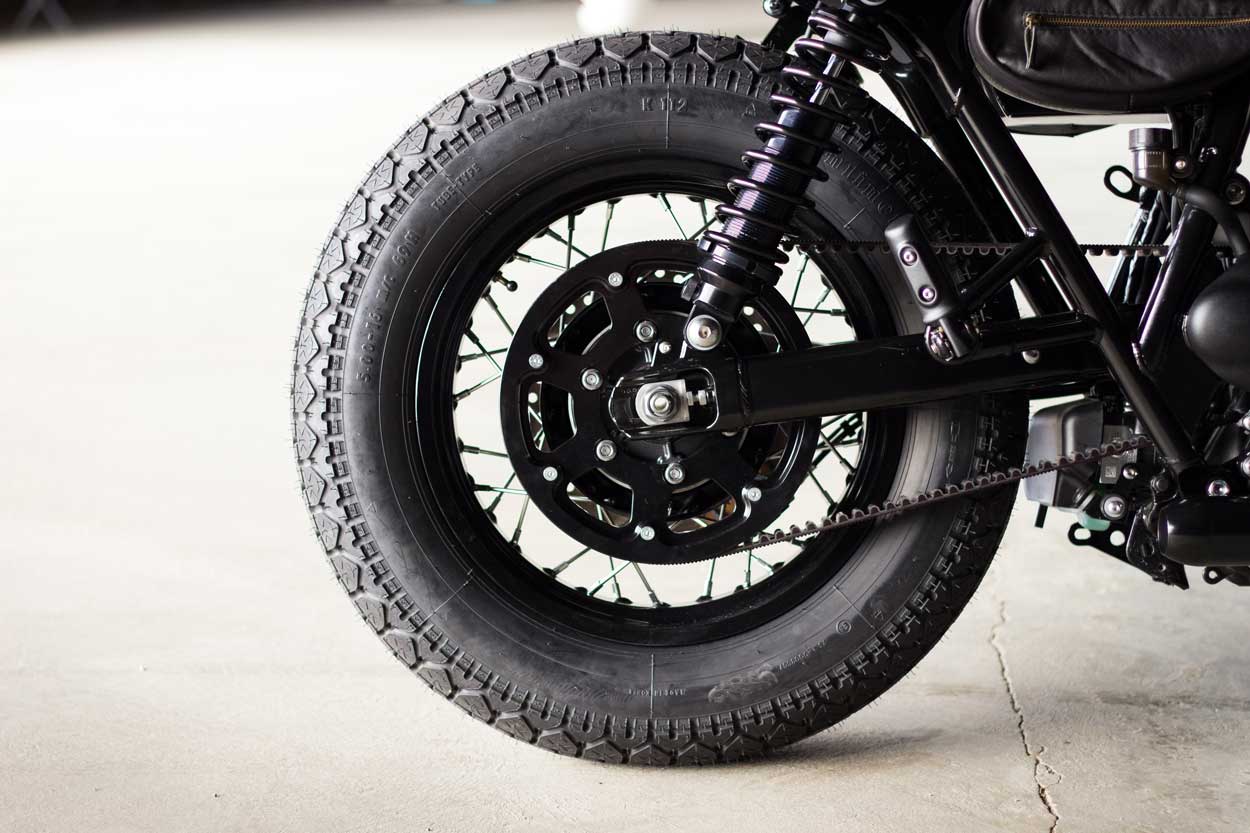 The all black 1200cc water-cooled Twin cylinder engine now transfers more torque to the fat back wheel via a belt drive transmission, which along with a set of big body shock absorbers co-designed with Shock Factory will ensure this Twins rider enjoys a smoother quieter ride.

Though the super short exhaust system, featuring black wrapped stainless steel headers and aluminium end-cans, the rider may not entirely benefit from those ‘quieter‘ aspects. 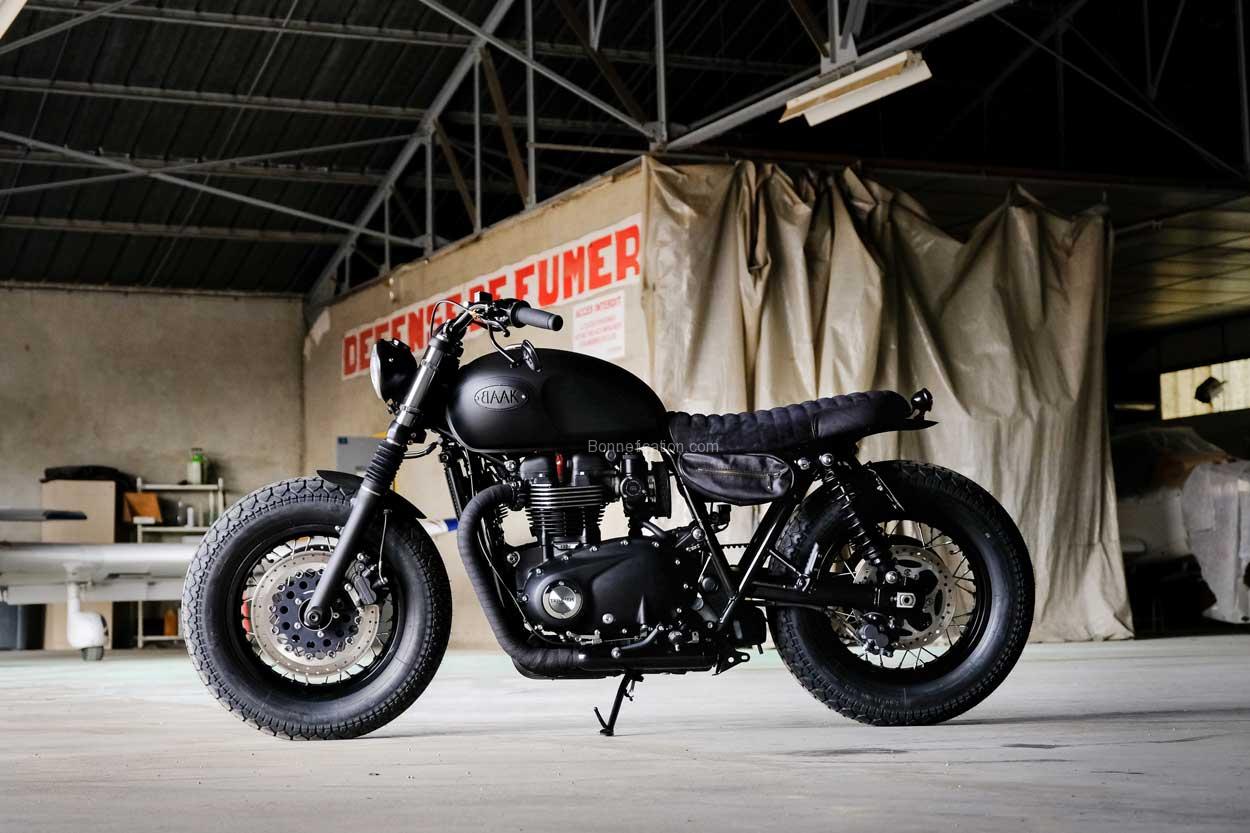 Other details on this build include an aluminium sump guard, Beringer discs and the relocation of the misplaced items including the rectifier (still) and the Ignition switch to under the tank. Also, you may not be able to spot them, but this T120 does wear mini LED turn signals located in discrete positions using BAAK’s own brackets. 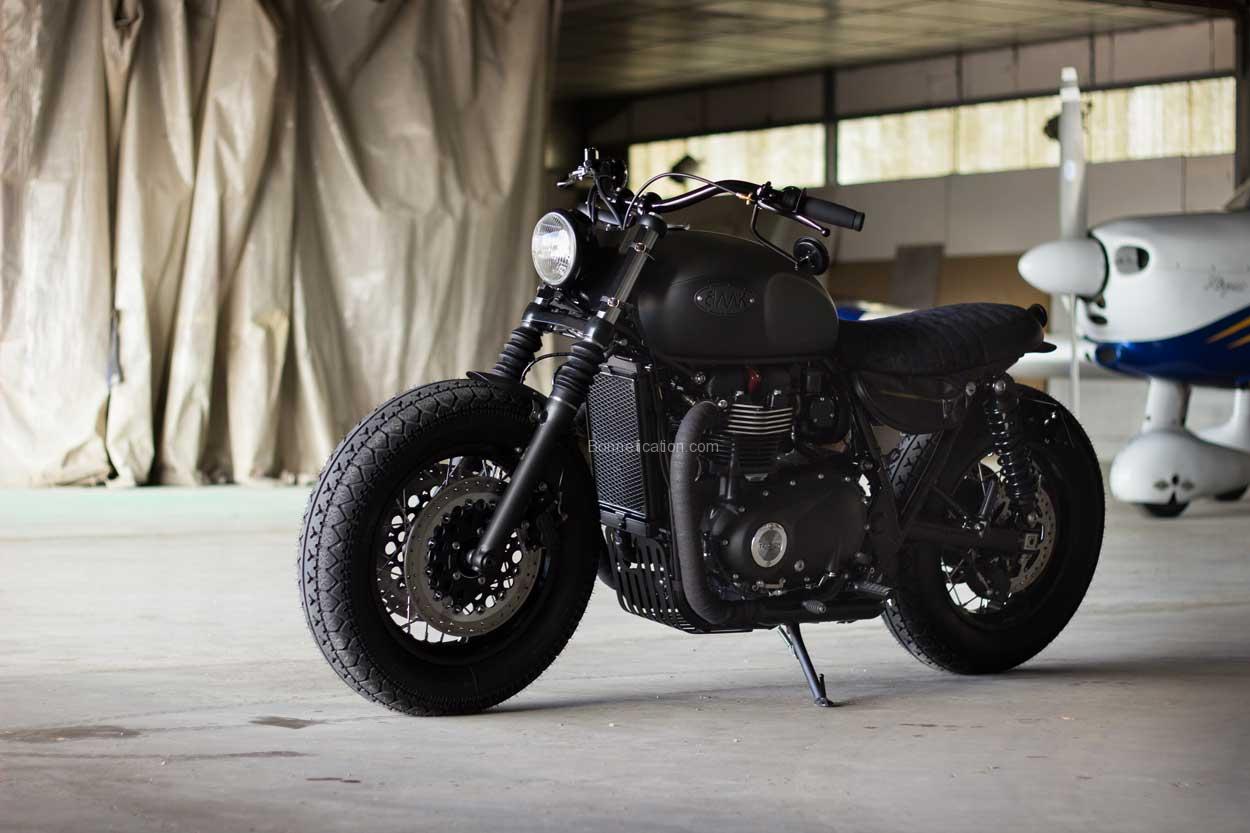 If you were in the market for something like this T120, it would cost you 27,000€ including the Triumph T120 and would take four to five months to complete. 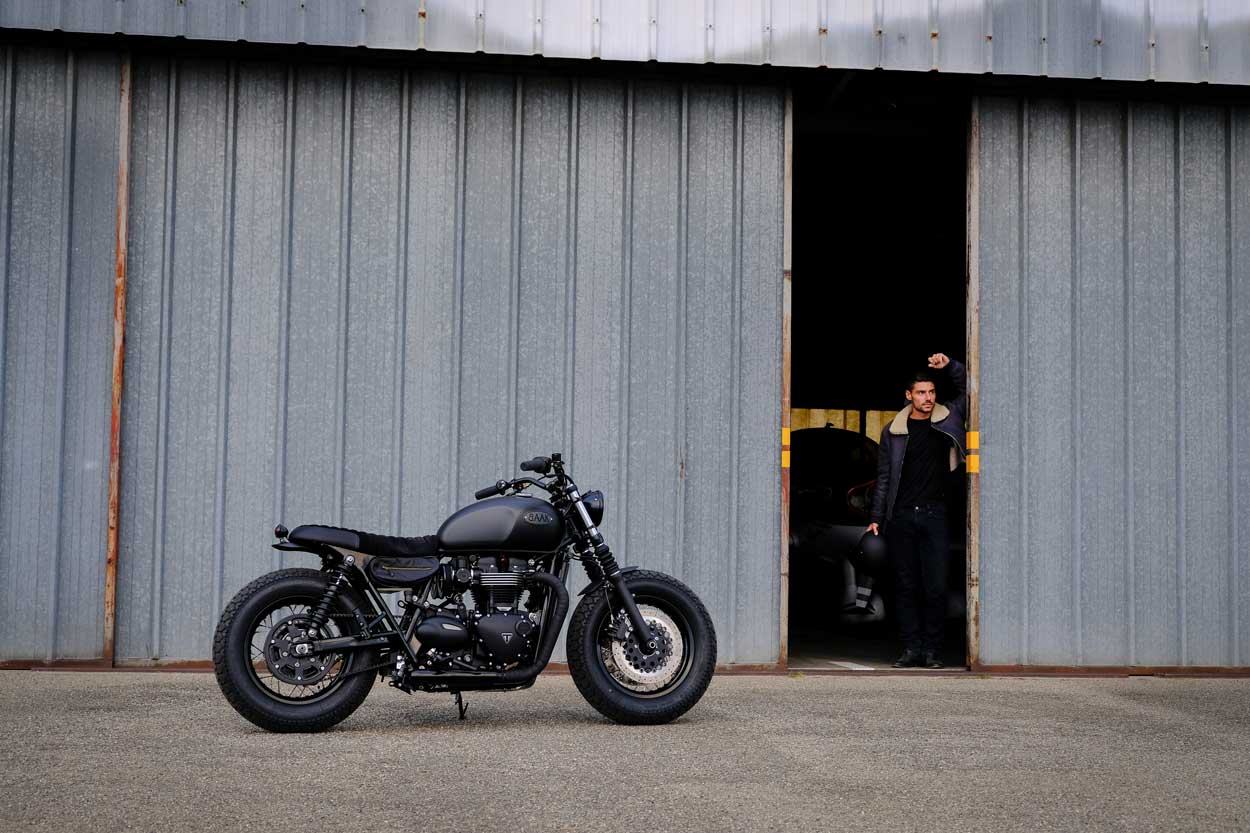 If you would like to see more of this particular build, Rémi Reguin and the BAAK team collaborated with movie director Aurelien Baud who filmed this T120 riding through some amazing landscapes. The video will be about the story of the three builds owners; Madison, who lives almost like an hermit in the Alps and owns the BMW NineT, Jérôme who is a professional aircraft flight instructor and owns the T120 Bobber, and Rémi who is BAAK’s owner and build the Royal Enfield as a toy bike for weekend trial sessions. Aurelien BAUD is once again the video director on this project, you can have a look at his latest work for BAAK here :