When I started blogging nine years ago, the Triumph Modern Classic custom scene was very much in its infancy. Though some had been tuning the 790 and the later 865cc Triumph Twin engine since the Bonneville’s inception in 2001, customising to the level common today, took a few more years to develop. 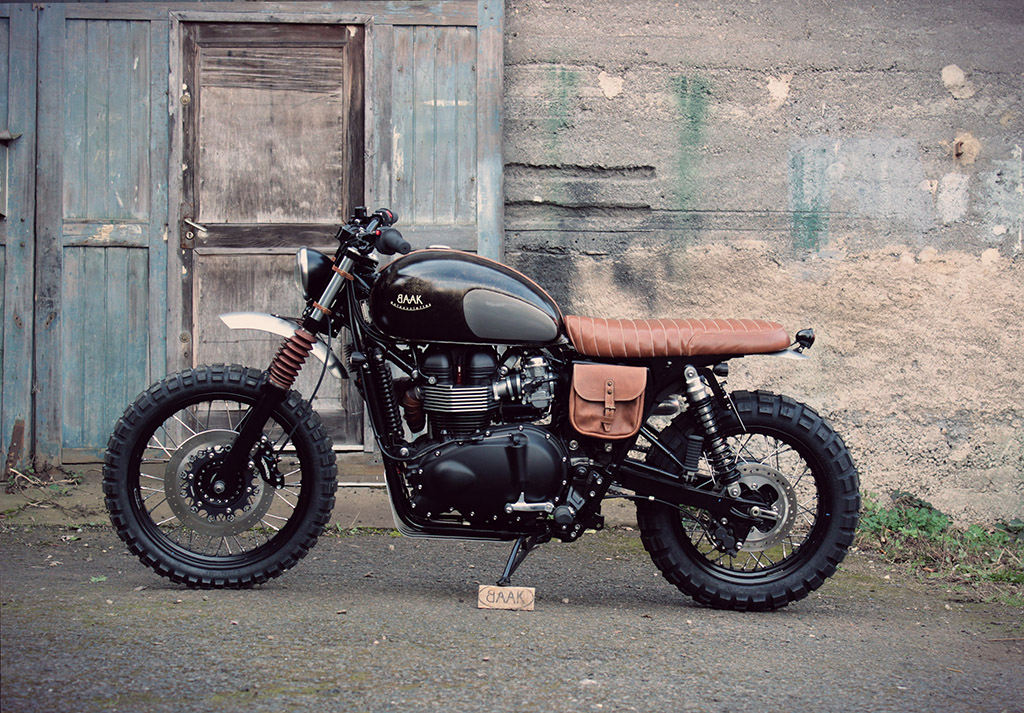 It was builds such as those by Deus Ex Machina, Hammarhead Industries and later Cafe Racer Dreams and MrMartini, which demonstrated just what could be done with the humble British built Twin – catapulting the Bonneville into one of the most featured modern motorcycles in the new wave custom scene. 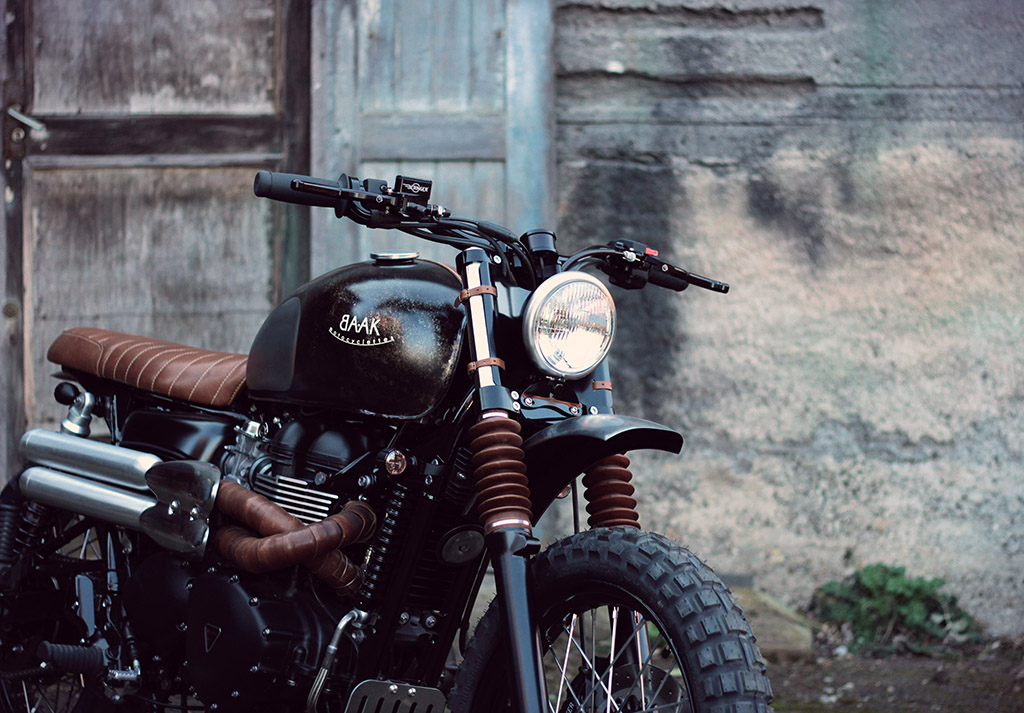 Bonneville customising has moved on since those early days of bolting on badly fitting Lucus tail lights, shortening the stock mudguards and fitting XS650 mini speedos. Though all three are still perfectly good modifications, thanks to the Bonneville’s popularity there are now a plethora of aftermarket parts and accessories allowing a shed building Triumph Twin owner to actually customise, and not just accessorise their Modern Classic. 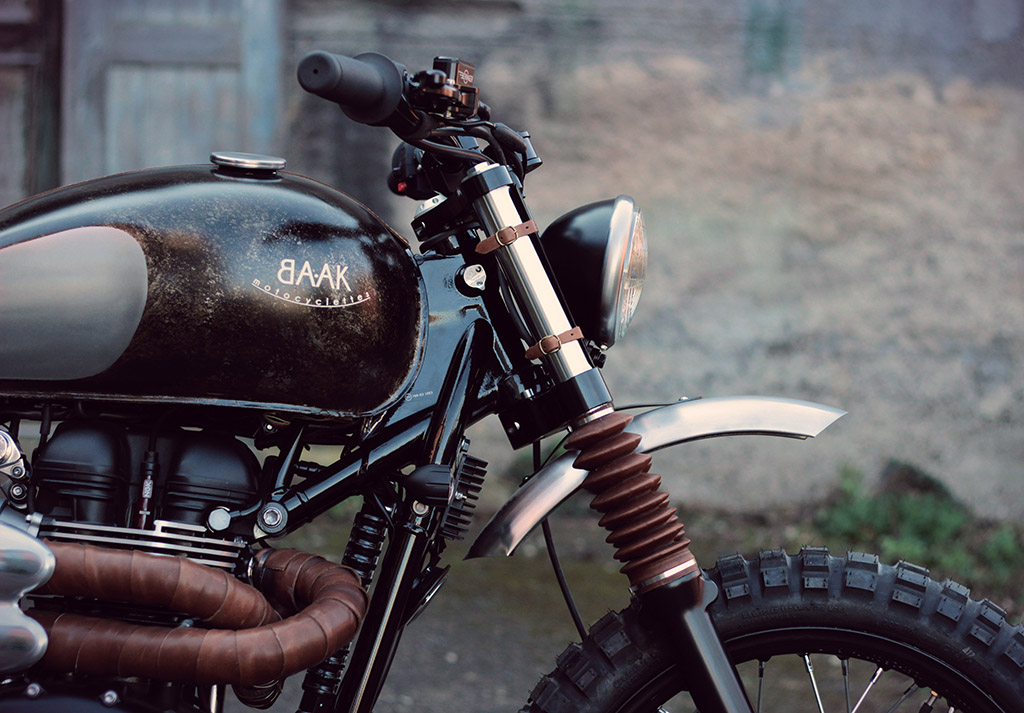 The Bonnefication Shop has a quest to find the very best parts and accessories available for the Triumph Twin, not only to sell, but also to promote – with this in mind its companies like BAAK Motocyclettes of Lyon France which stand out from an ever increasing crowd, selling a range of parts via their online store which are perhaps more haute couture than off the shelf. 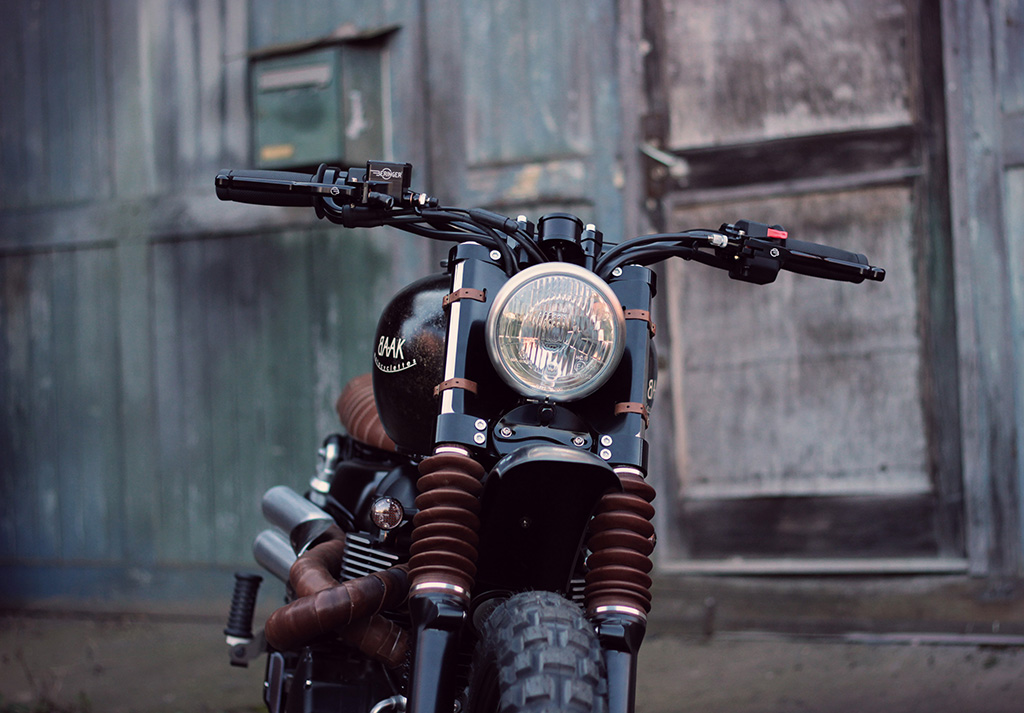 Bonnefication recently featured BAAK’s Bonneville Alliance, a custom Triumph Twin which sported a beautiful Precision side-car from French retro side-car restorer Alternative Side-Cars, a build which demonstrated BAAK’s distinctive parts and style. Their latest build is based on an Air Cooled Triumph Scrambler, sporting a range of BAAK goodies, some of which are currently sold via their online store. 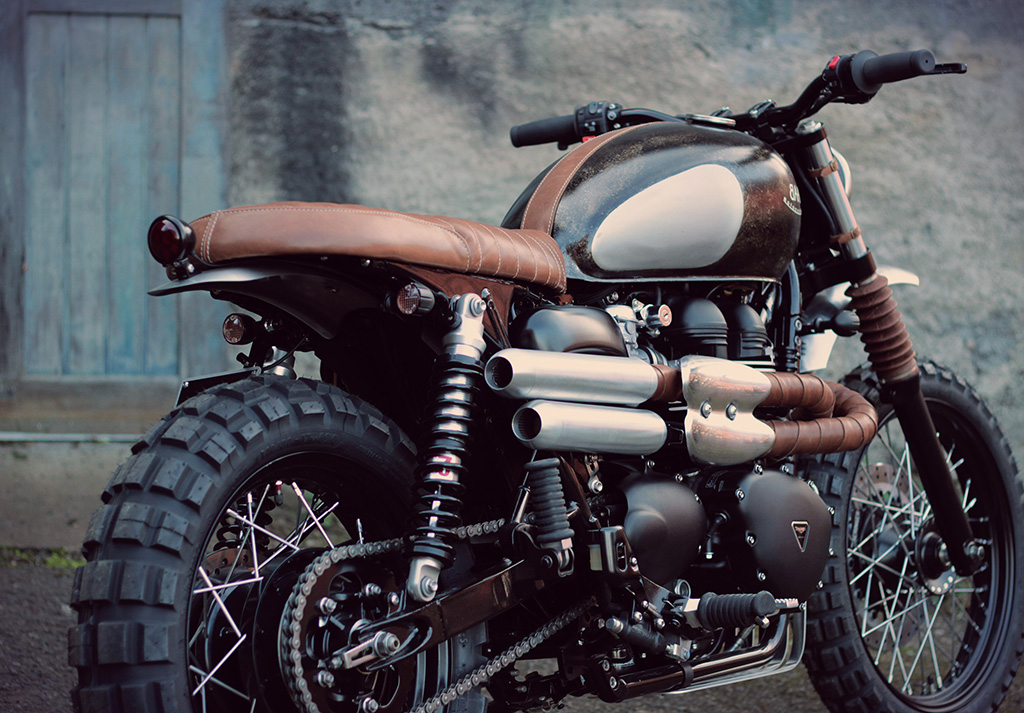 This build like the Bonneville Alliance is fitted with BAAK’s frame shortening kit, a kit including a Bates style LED tail light, seat and mudguard. This kit is bolted to the Twin rather than being welded, handy for those lacking either the equipment or skill to undertake the work. Personally I think a short mudguard looks better than the popular fender eliminator, with a mudguard being more in keeping with the Modern Classics heritage and style. 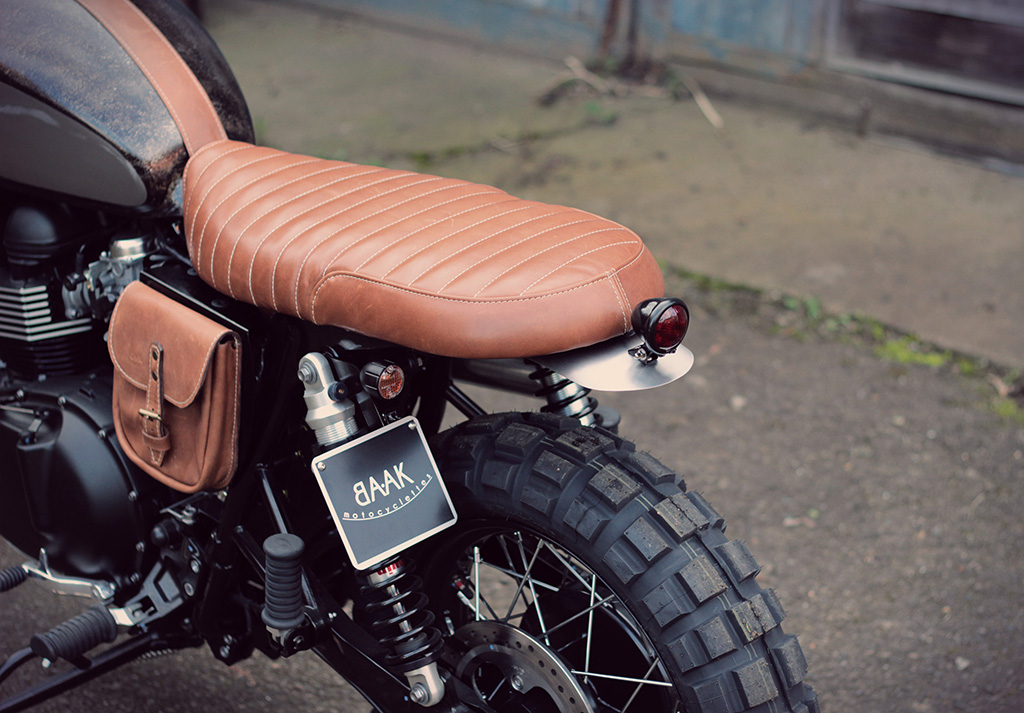 One big problem we have here in the UK is the size of our numberplate – originally designed to be read by short sited policemen conducting speed checks in the fog. This parachute we are forced to have strapped to the back of our motorcycle ruins a bobbed fender, so its no wonder many take the risk of fines and fit a smaller plate.

A side mounted bracket which bolts to the top shock mount, may just be the answer, though fitted with a legal plate the bike may handle as if had been fitted with an air brake, but with a nice 7” x 5” plate it will keep that lovely bobbed back end clutter free. 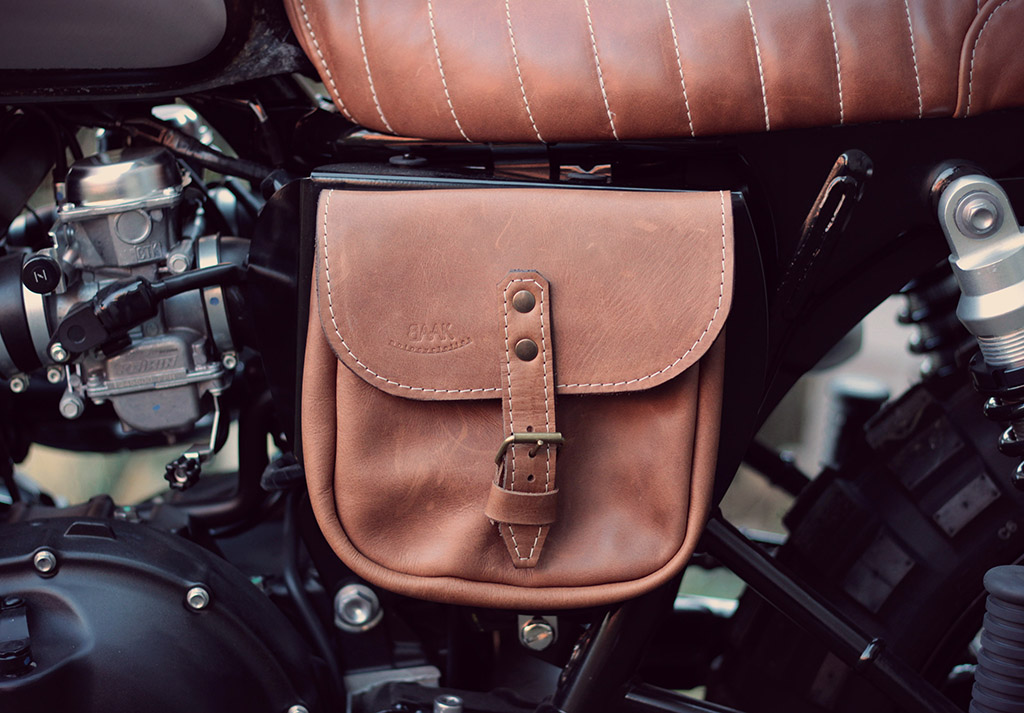 The Scramblers left-hand full size side-cover has been replaced with a leather saddlebag, a handy accessory for storing a disc lock or your Ray Ban’s. The leather used on the saddlebag matches the seat and tank strap, a strap which may appear to have no practical purpose other than looking the dogs when paired with that seat, side cover and an eight fold leather fork gaiters, which may just be the sexiest on the market. 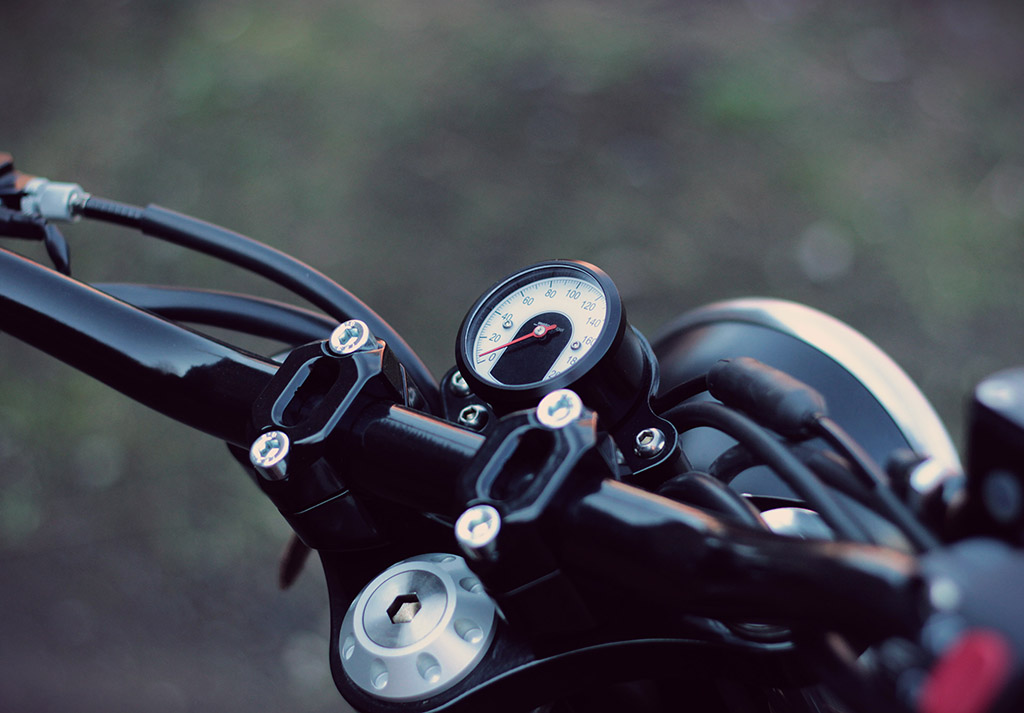 At the front is a Bates style bottom mounted headlight with additional headlight plate, behind which hides the wiring for both the switches and the plug-and-play Motogadget Tiny speedo*. The Scrambler now sports CNC’d triple trees, to which is secured a dirt-bike inspired high mounted mudguard – with the top yoke being fitted with Renthal Fat Bars  wearing the stock switches, Biltwell Renegade grips, and a set of Beringer levers and Brake reservoir. Which leads us down to a Beringer 4 piston calliper and Aeronal Classic disk, bolted to the Scramblers black wheels, now fitted with a set of TKC80 Twin-Duro tires. 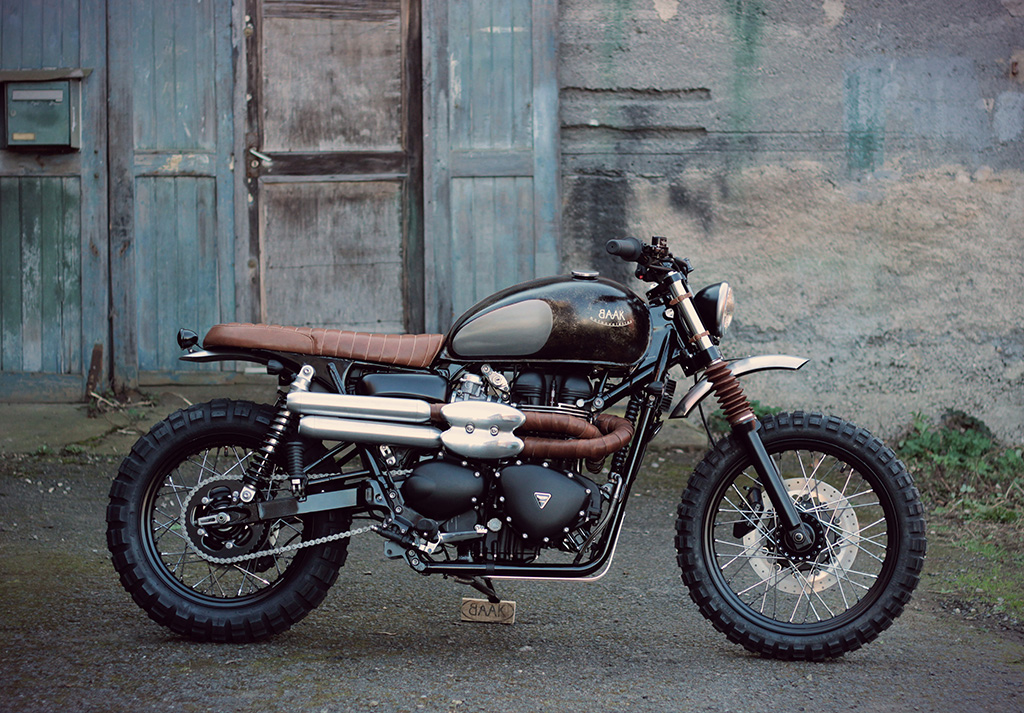 Some ask what they can fit to fill the hole left when fitting low pipes to a Scrambler, there are several very nice options available from various manufactures, but the cheapest is not to fit low pipes to a Scrambler. After all, other than the sound of the 270º cranked 865cc engine fitted to the Scrambler, those high pipes are its trade mark – and why fit low-pipes when high-pipes look as good as these BAAK 2>2 custom pipes!

*CanBus models. Pre can bus will need wiring in.