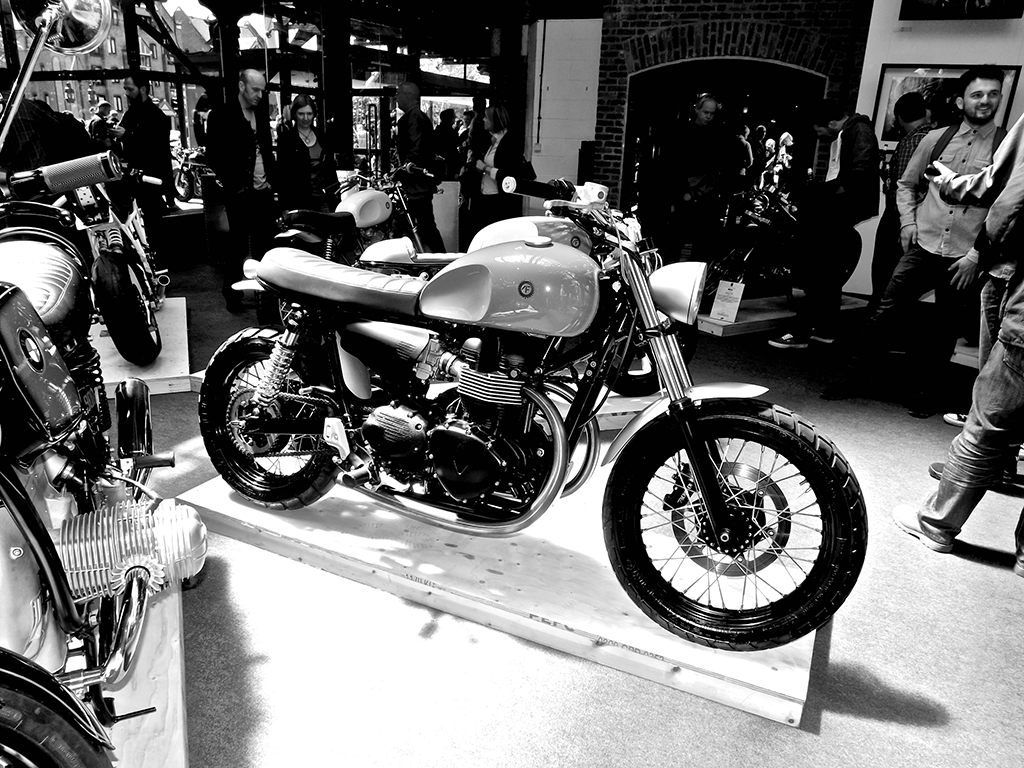 The Auto Fabrica Type 5, for me was one of the stars at the BSMCIII event which was held at the Tobacco Docks in London on the weekend of the 24th – 25th May. I spent a bit of time looking at the particular build, perhaps a little to much as people started asking me questions about the bike . 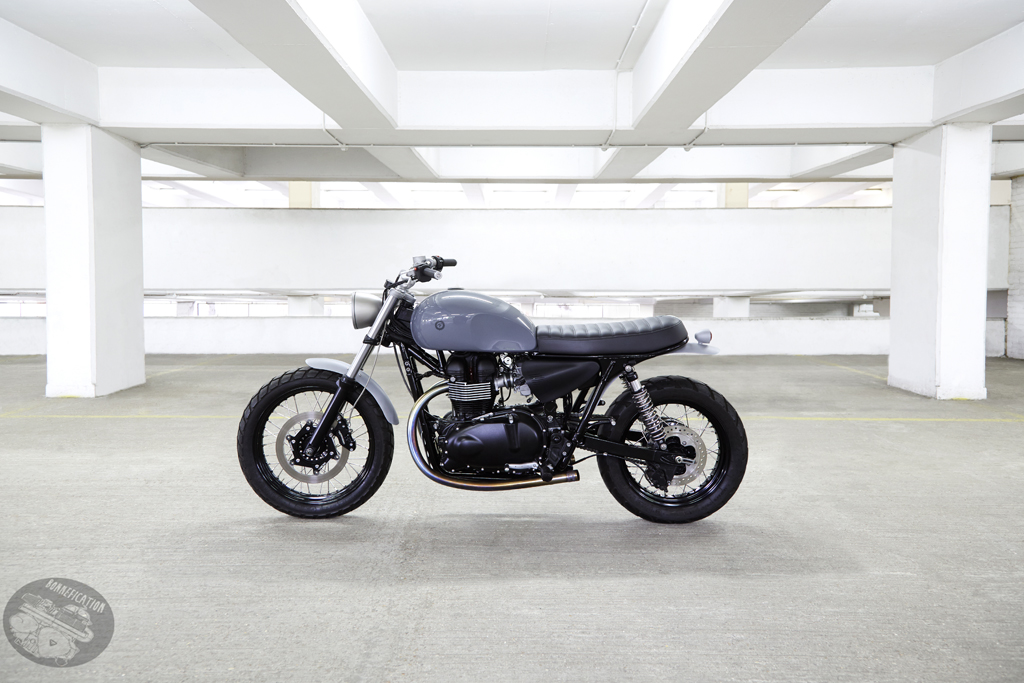 A few of the details I noticed without looking at a spec sheet. Included the scolloped Petrol Tank, those gorgeous exhaust headers, which have the best curve of any headers i’ve seen on a Triumph Twin. Crafted side-covers and the Auto Fabrica in-frame oil cooler. Which does a neat job of disposing with the ugly frame mounted oil cooler and making the engine area far less cluttered. This give the bike a much cleaner look, reminiscent of the Hammarhead Jack Pine (which had no oil cooler) 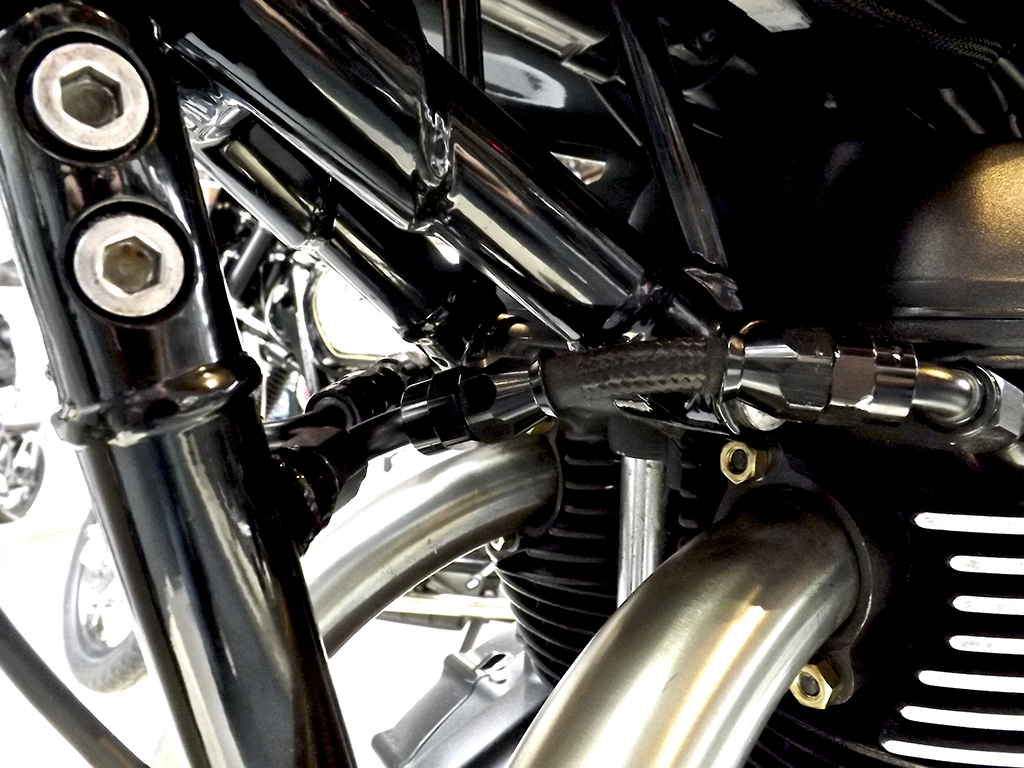 The in-frame oil cooler modification not only looks good, but has also proven to be more effective at cooling the engine than the OEM item. This is due I’m told, to the larger overall surface area of the frame tubes, which dissipate the heat a lot quicker. Perhaps this is a modification Triumph should put into production, or perhaps with enough interest, an off-the-shelf product from Auto Fabrica. 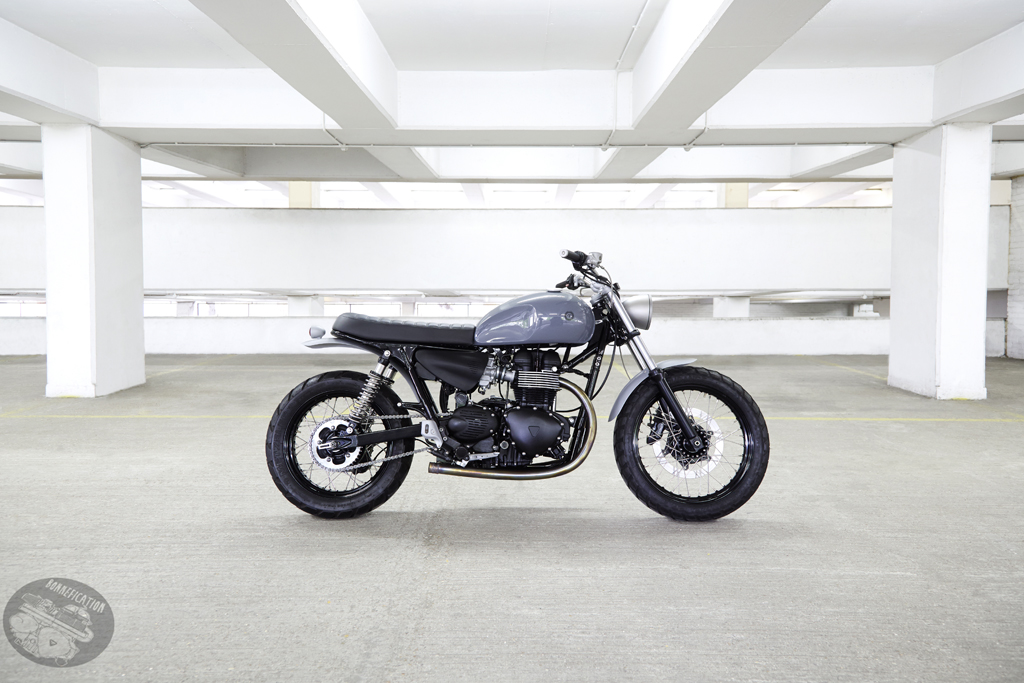 Overall the Type 5 is a good looking and well finished machine. With the Auto Fabrica crew not missing the finer details which often get overlooked. For example they have done a great job of tidying up the wiring after swopping out the stock headlight, as well as relocating the rectifier away from the front of the bike, to under the swing arm where it can be forgotten.

These are just details, but when you see a lot of modified Triumph’s, these are things I notice.

Read on for the full spec… 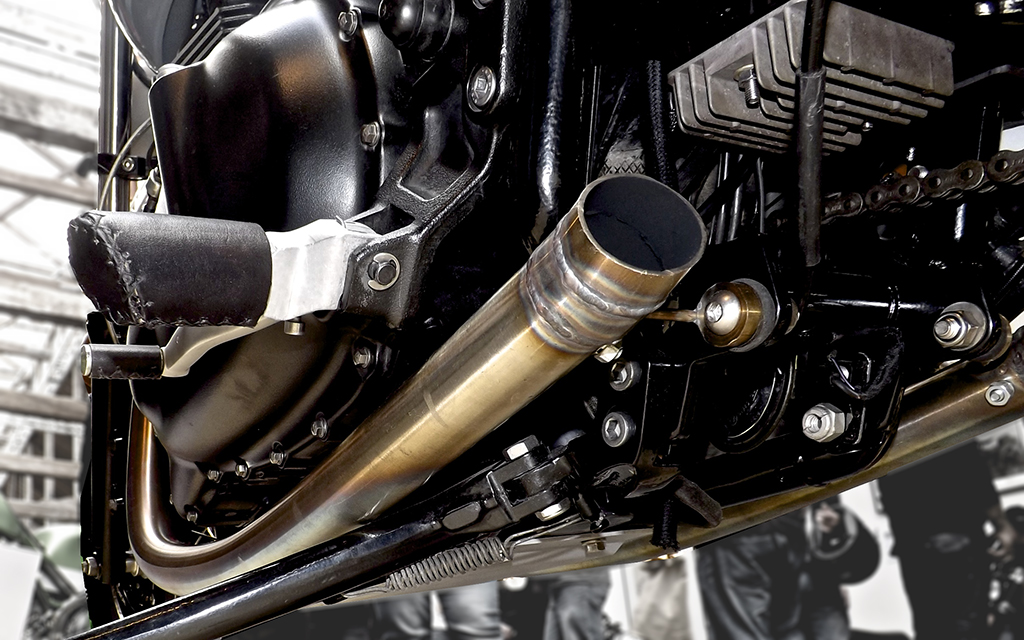 Type 5, our fifth official build, this time with a few extra challenges and features, as well as our first bike to be built to the specification of a client. Up until now we have been building to our own simplistic style, working to a deep understanding of what the human eye and mind desires mixed with a knowledge of current and future trends in the custom bike market. This was also the most complex donor bike we have worked with so far due to masses of wiring and being fuel injection. 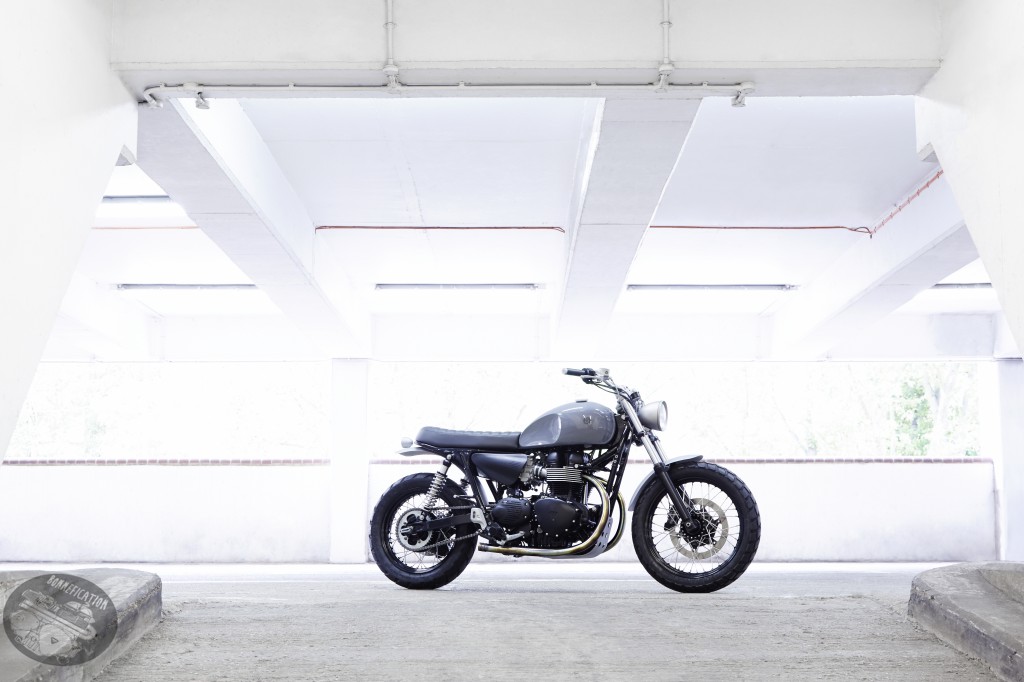 Our client was not for the fainthearted, we were aiming to please a highly trained eye and uniquely skilled photographer on his personal, and already much loved, Triumph Bonneville 900 Scrambler. However, he approached us on the merit and want of our current type 1, 2 and 3 bike styles, as well as a good relationship that has been built at a few BSMC social events, so this project began with strong understanding of each other and a charged mutual enthusiasm. 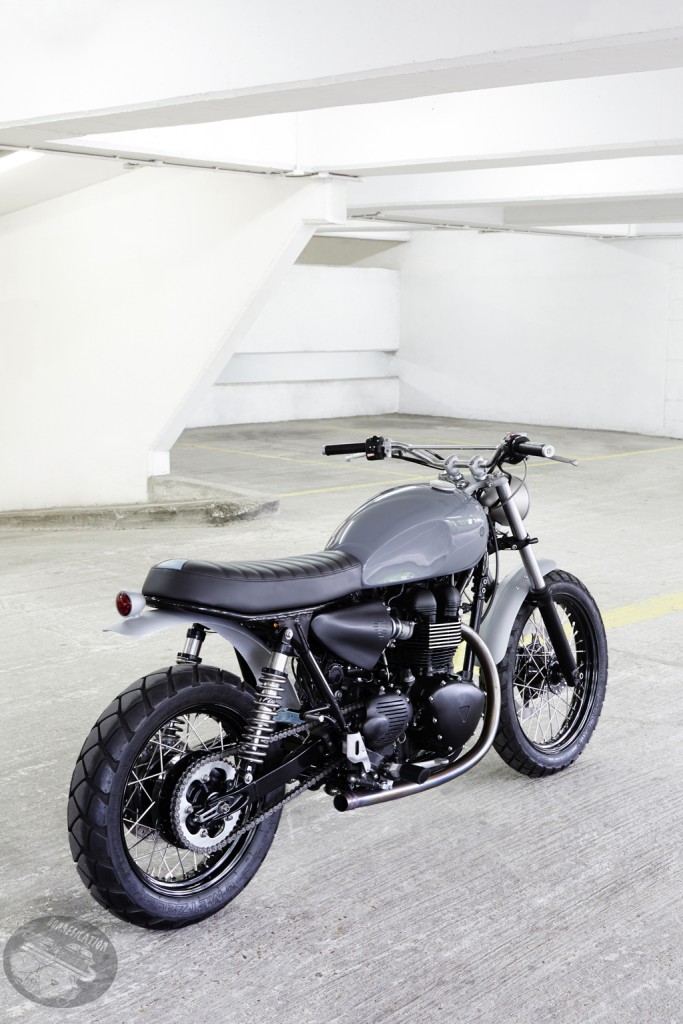 As you may know from reading about our other bikes or meeting us in person, the Auto Fabrica team consists of qualified Automotive and Industrial Designers, and we treat each project with the same approach. We had the bike in its original form, delivered to us, where we started working on the visual in sketches and 2D form. We use Photoshop to further explore deigns, details, forms and then bring it to life on paper. We take these designs and start to mock up sections physically or in 3D software before carrying out final hand crafted parts to create the final machine. 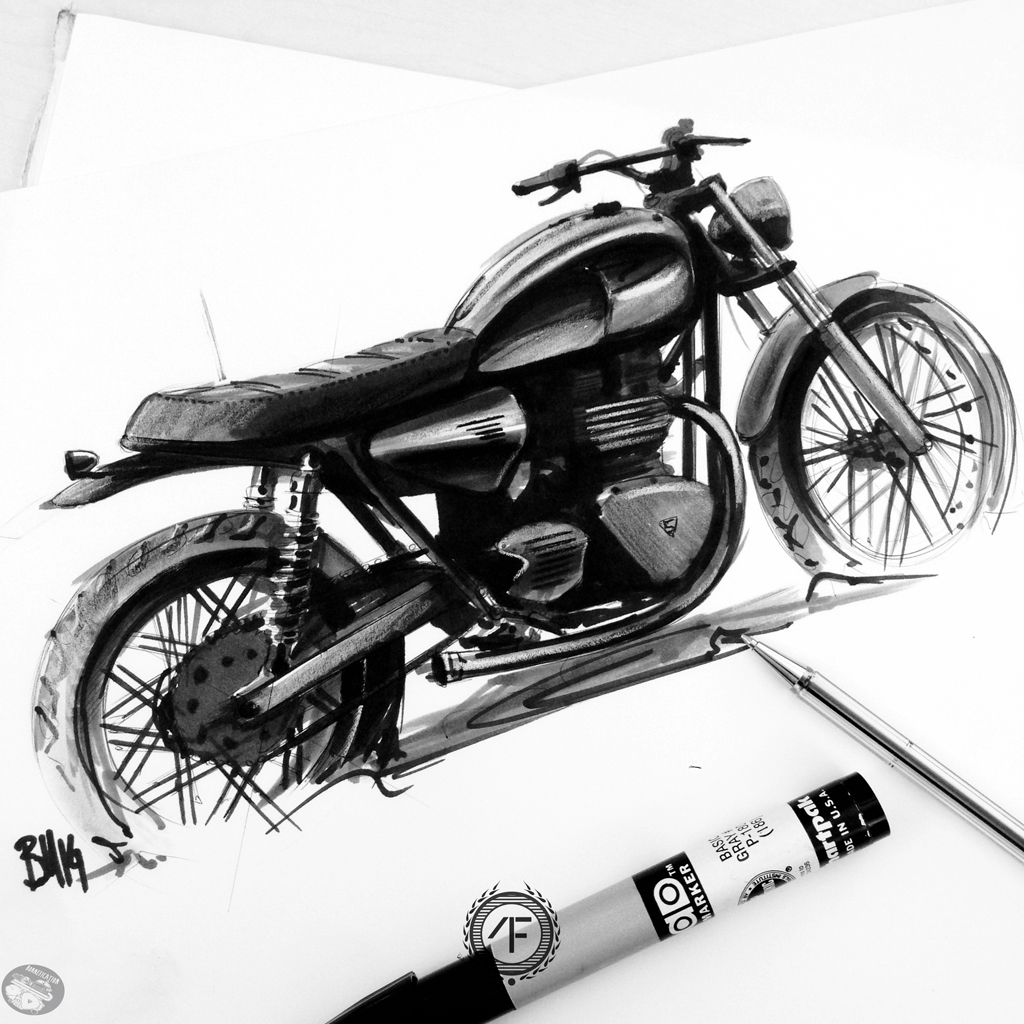 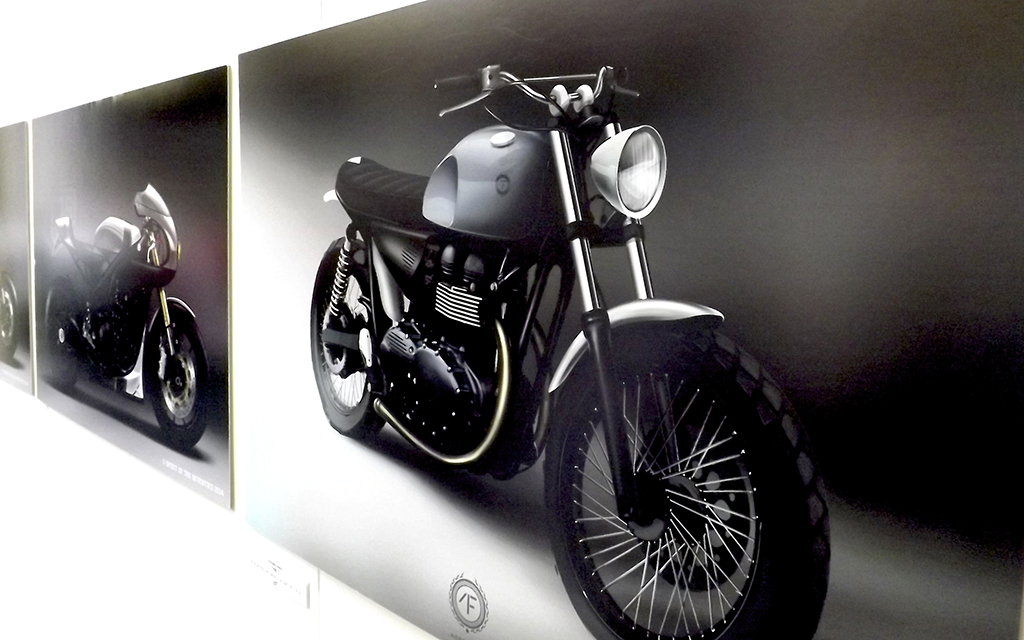 One of the key attributes to what we do is, we create a vision of how we believe the original designers wished to produce this bike in the design studio. We remove all the cost-down and mass produced components and then replace these with bespoke and highly crafted and engineered ones that we source and rework or fabricate ourselves in house. We then understand how the major metal work and structure was intended, how compromises were possibly made for tooled and mass produced machined parts and recreate and alter these with complex and skilled hand made pieces. This is particularly clear on most of our tanks where we take the design, re-engineer the original or completely rebuild using traditional hand beating techniques in aluminium or steel. 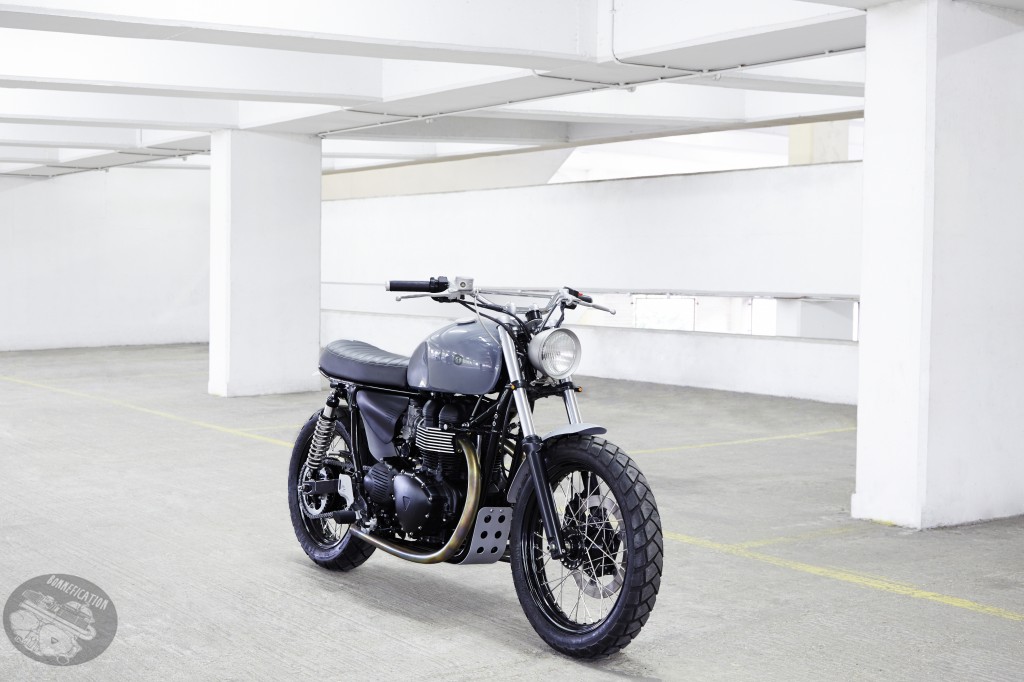 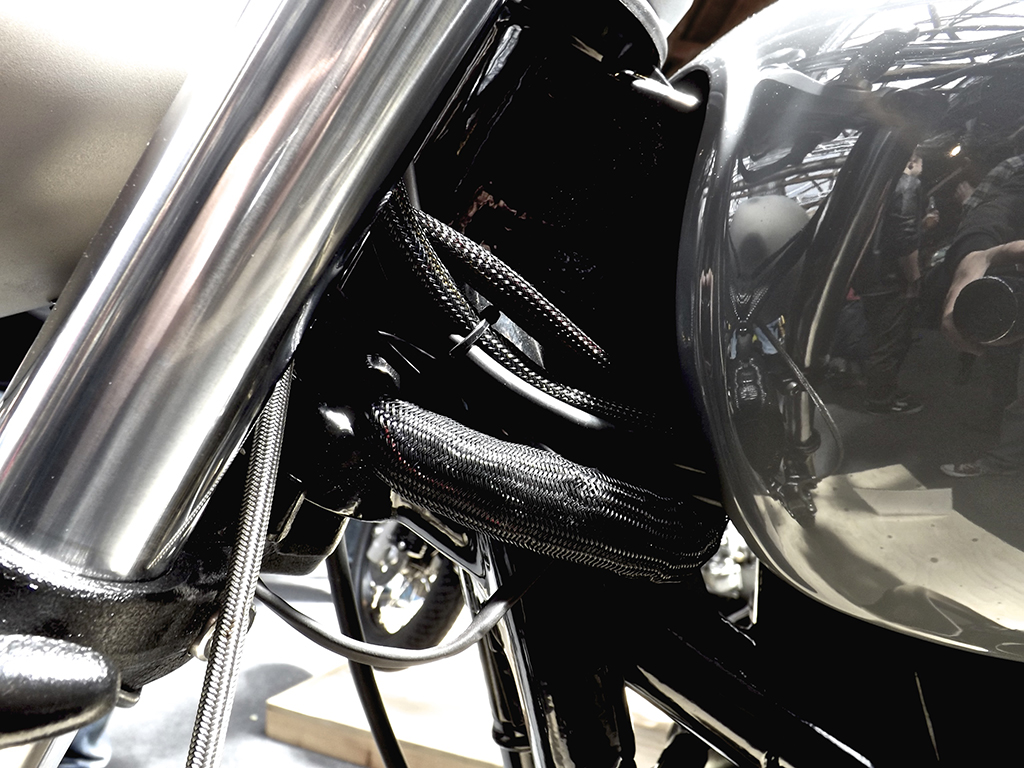 For this bike, the tank had all of our usual Auto Fabrica touches. Particular attention was taken to the side profile which was tided up and created a much sleeker and compact visual appearance. The most clear difference between our tank and the original are the features for knee clearance. We felt the standard features were a bit washed out and tame, we wanted to re-imagine these and expose more character and relevance. With introducing these features they highlighted the natural plan curvature of the tank and you were able to see a much more elegant and pleasing plan shape, this was also the major element making the tank appear smaller. Creating these features was not easy because of the way in which they meet in one point, we had to contend with and work around the fuel pump and tank internals in order for them not to clash.

The frame had a major rework, however the outcome is very subtle in order achieve the clean look we demand. We did this with two main changes. The Bonneville is notorious for a disjointed seat and tank arrangement where their side profile lines are not aligned or angled in relation with each other, because of this we worked on changing and reworking the top tubes. The new tubes were placed higher at the fore most point, where the tank and the seat meet, with a new looped and swept-up section leading towards the rear, with this we created cohesive and unbroken free-flowing lines. We feel this was one of the most important changes to the bike and allowed us to create a huge, yet almost subliminal, visual cohesiveness that actually looks effortless and untouched. The second modification to the frame were the down tubes, we wanted to accommodate the oil fittings here to remove the oil cooler and really clear up this area, it also allowed us to manufacture the exhausts to be much more free flowing because of the freedom. 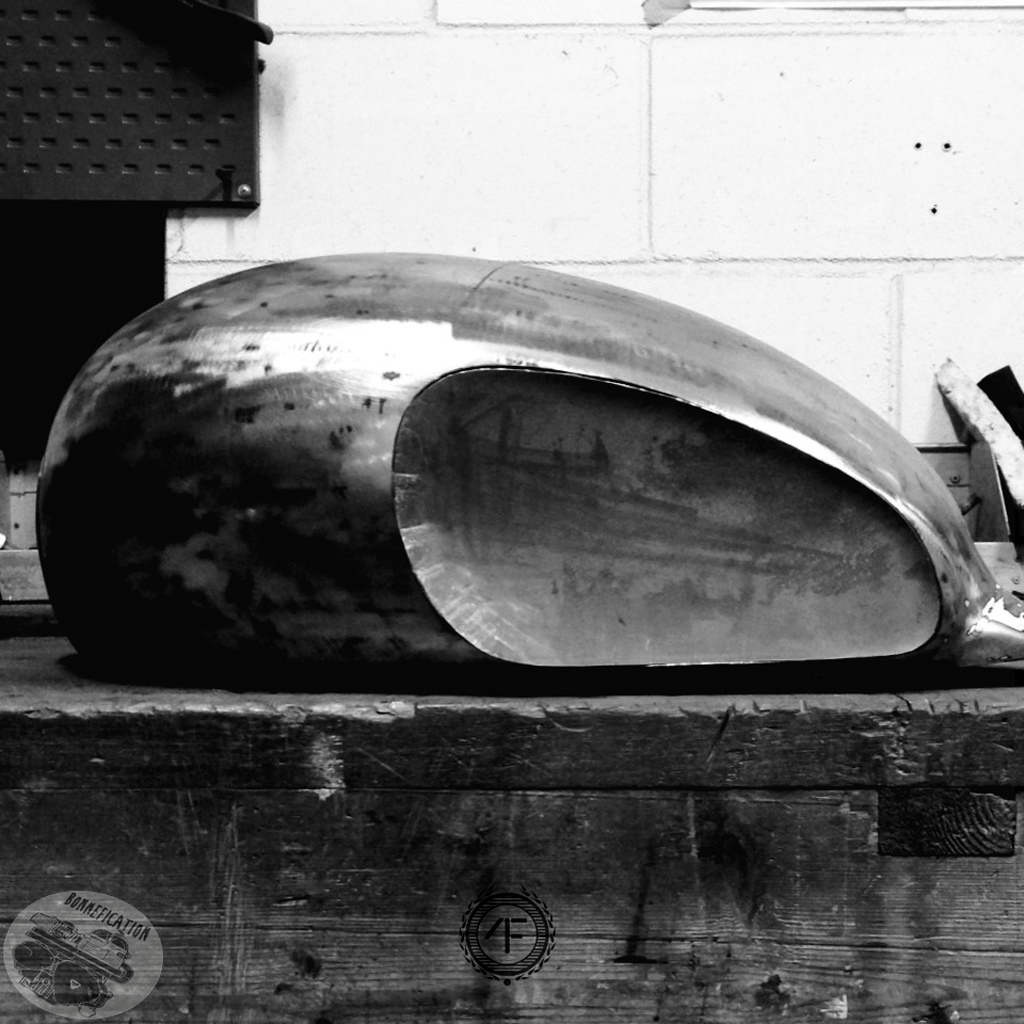 Bespoke side covers were designed and manufactured in 2mm aluminium. They were shaped to portray natural intake characteristics towards the K&N air filters situated behind them. Horizontal details finished the part and referenced the engines cylinder head situated in front of it. 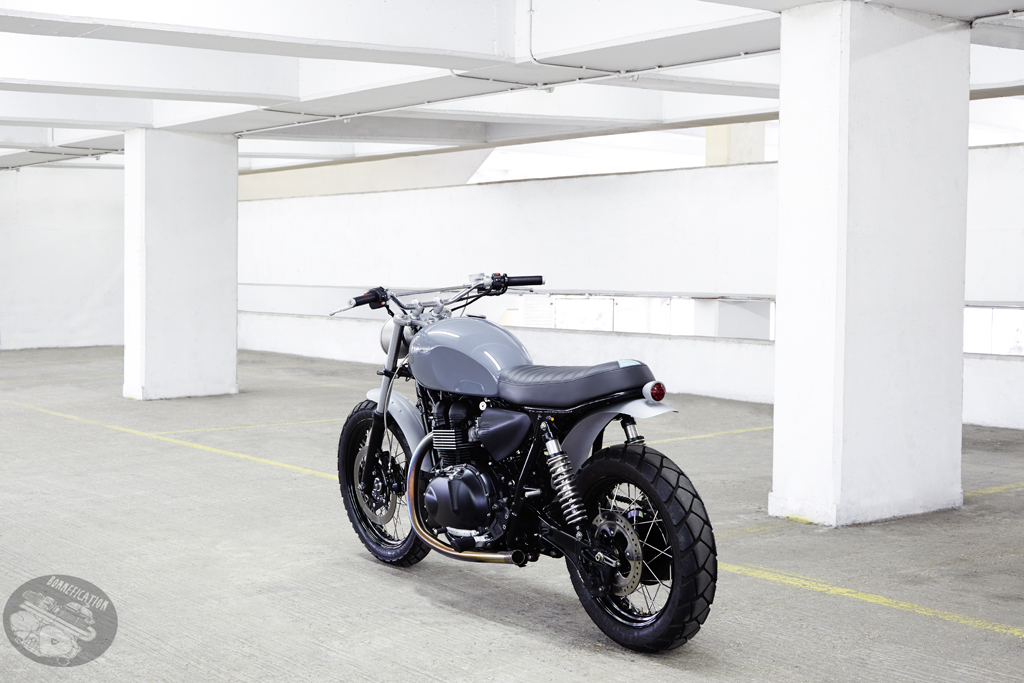 The speedo of choice was a Motogadget Tiny, this allowed us to reduce the mass of components at the front. We try to reduce the amount of ‘off the shelf’ parts but as we cannot yet manufacture speedos, we felt this piece added that extra level of quality that Auto Fabrica wishes to represent. Original rims were freshly powder coated and wheels were re-laced with stainless steel spokes. 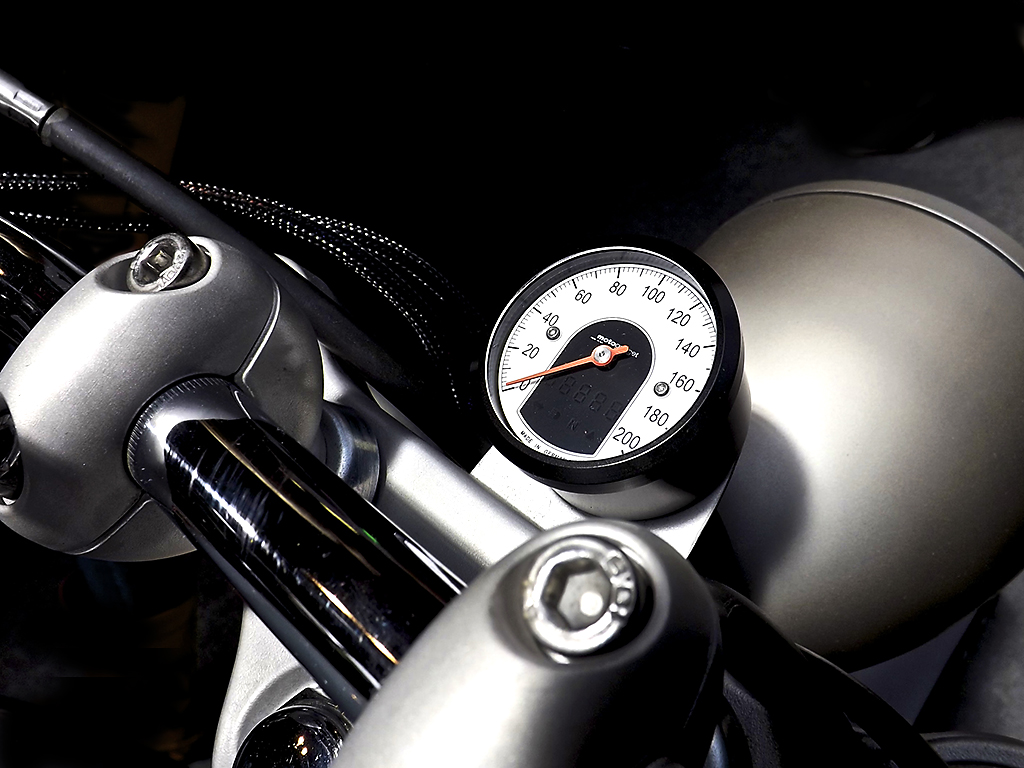 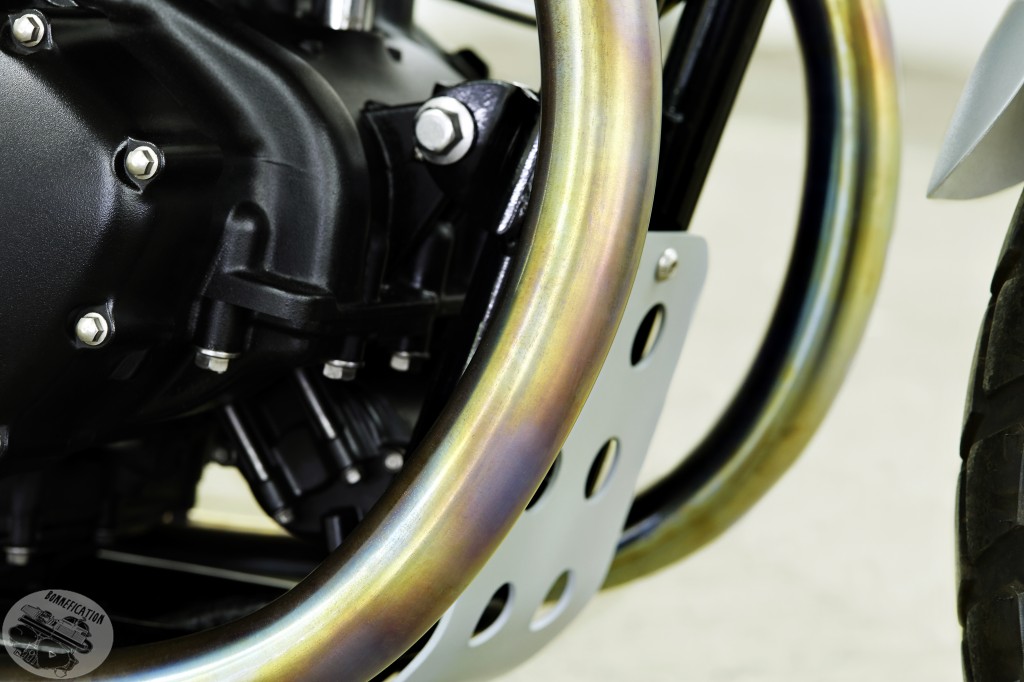 To cover the wheels, we created our own fenders. The rear fender, a simply shaped section of aluminium mounted to the frame under the seat. The front fender was also made from aluminium but had more attention to detail as it sits quite openly. We were inspired by the clients Ruby Helmet and created a sleek feature line through the centre which washes out towards the front and back. The original front fender also had a central feature but was a bit brash and emotionless. The outcome of the final fender was as desired, with an added feel of the Bugatti hood central features.

A new front light of our required dimensions was sourced and reworked with bespoke fixtures and fittings then completed with an in house aqua blast finish. The rear light is housed in a one off, one piece turned solid aluminium piece, styled similarly to the miniature indicators, this was then mounted on top of the rear fender.

Exhausts are one of our in house specialties, adding bespoke character, quality materials, build quality, sound, performance and design cohesiveness. This bike got a treatment of hand bent stainless steel tubing with unique pie cut exits, flowing with the bike naturally but with prominence. Performance has been greatly improved by the free flowing air filtering system and new exhausts. Bob Jackson also introduced for us a Stage 1 tune up which gave the bike the power to match its new looks. 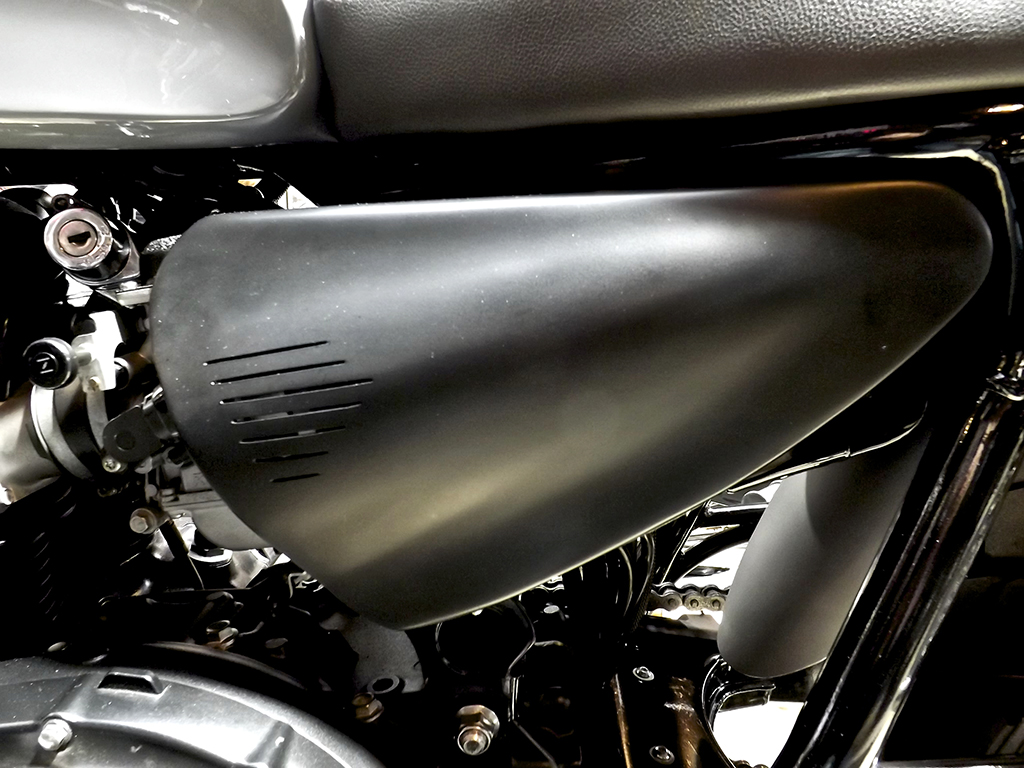 The client had a keen vision on some colours he wanted to explore from the beginning, so we involved these in extensive colour and materials exercises. To tie in with the Auto Fabrica DNA we ended up with a very clean and clear palette, using a custom grey for the tank and subtle changes to blues for the highlight colours (including the AF Triangle detail). We use high quality leathers to dress the saddle and handle bar grips, really striking a balance of the strong but soft natural materials up against hard but organic metal forms of the tank and frame. Overall this bike has been a great challenge, we have learnt a great deal. Through the bike and our client, it has also been the most rewarding builds to date. We are particularly delighted with establishing, proving and creating another Auto Fabrica bike with simplicity and uniqueness.