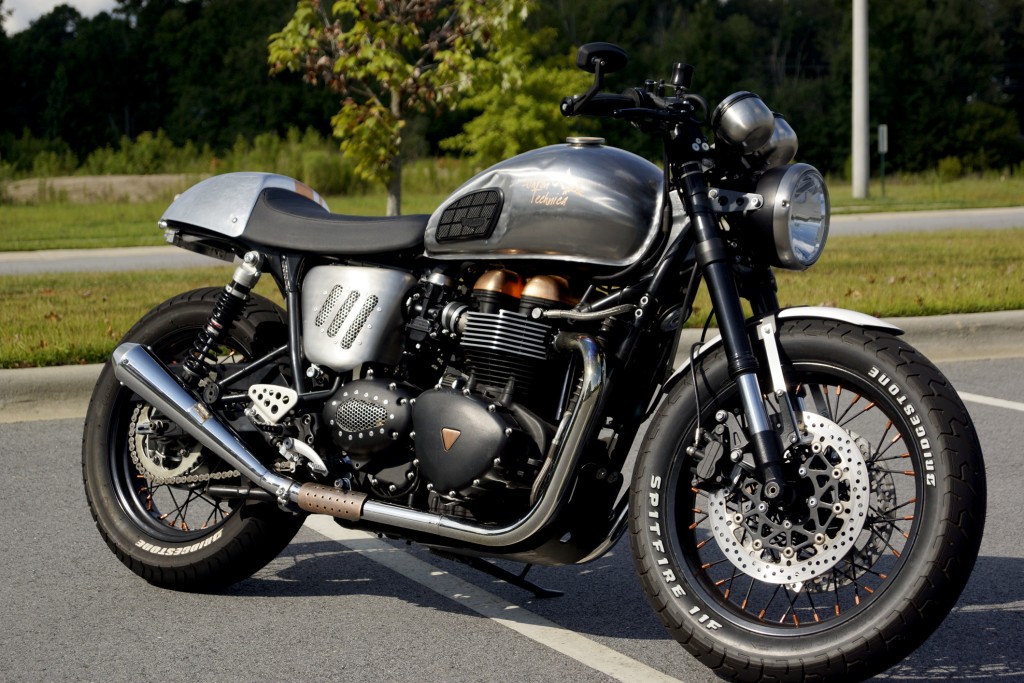 From legend, a Chimera is a mythical fire breathing creature formed from various beast, including a Lion, a Snake and a Goat. Though on this occasion the Chimera is not mythical, or is it made from animal parts. But like it’s namesake, it is formed from a collection of beast. The heart of this custom Triumph is a crash damaged Triumph T100, the rest is formed from parts rescued from other Triumph models including a Speedtriple, Daytona, Tiger and Speedmaster. 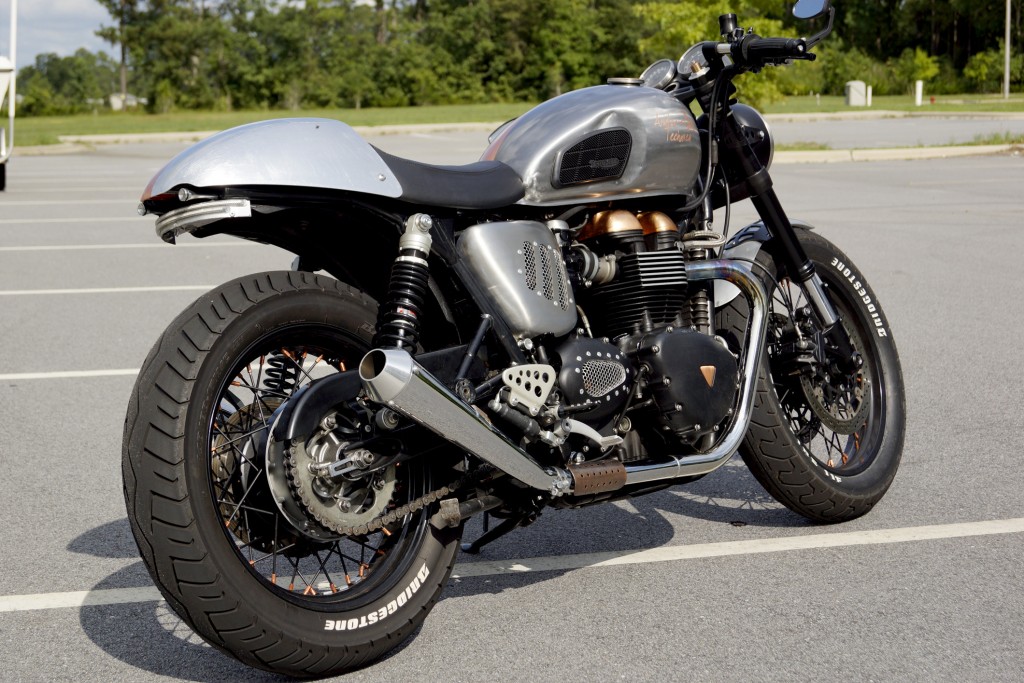 The creator of this beast is Kristopher Ashton, and the story of the Chimera build can be read in detail here. Bonnefication isn’t going to repeat what has already been written, so we are going to find out a little about the man behind the build, so here is Kristopher story…

My name is Kristopher Ashton, I’m 33 (32 last summer when I built the bike), I’ve just finished a degree in geophysics, during which I received a grant from NASA for my research on Fe isotopes in Banded Iron Formations related to Fe-metabolizing bacteria, but I also have a degree in automotive systems technology. I’m currently not using either of those degrees for gainful employment, as I’m currently working on finding the right few mobile app developers to help me bring to fruition an app idea I’ve been developing. 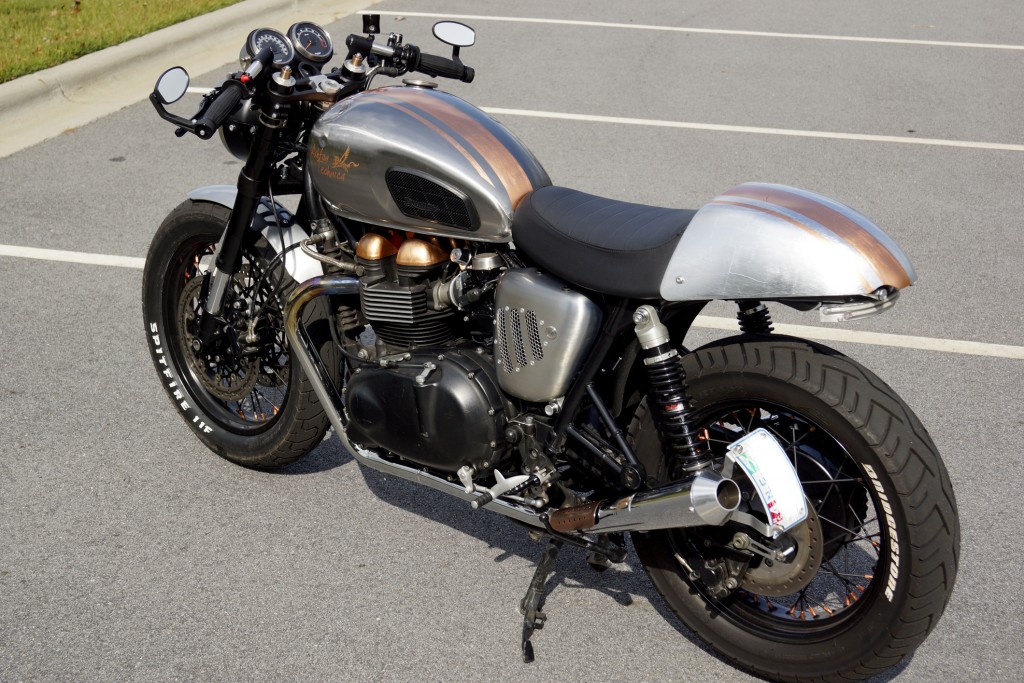 I live in Greenville, NC, I’m a mountain biker, kayaker, camper, mountaineer, hiker, rock climber, food lover, cheese fanatic. I am a riding purist, and ride every day, year-round. I’m addicted to riding, and now that I’m finishing building my second bike (which is number 3 in my current stable of rides), it seems I may have a real problem with this addiction. My other bikes are a slightly modified 2007 Moto Guzzi Griso 1100 (which, after riding it nearly every day for 3.5 years, STILL makes me grin from ear to ear), and my current cafe build is a ’77 Yamaha xs750 triple, which will be named the Luxe 77. 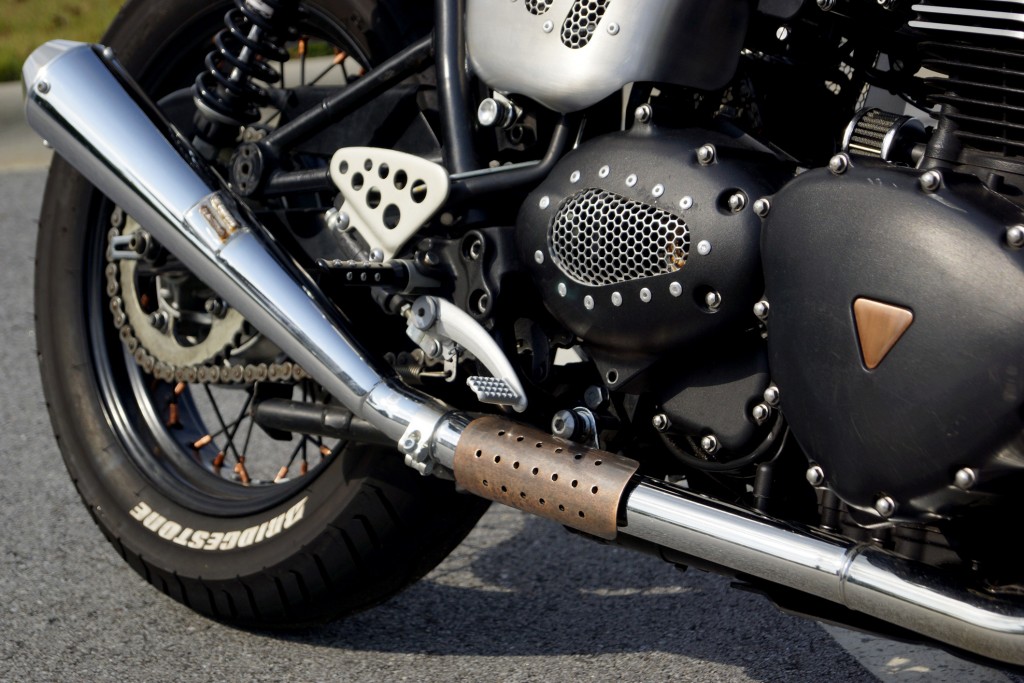 This bike was built entirely in my sun-room and back patio (because I live in a condo and have no garage). The decision to build this bike developed out of my attraction to the style of the bonneville (or rather my attraction to how I saw it in my head), combined with my love for working with my hands, creating something new, taking something broken or old and making it new or different.

I’ve always loved taking things apart and changing them (when i was 8, I disassembled a sony walkman cassette player and built a remote control car from its parts. It could only go forward and backward, but I was only 8 ).I started drawing the images of what I wanted the bike to look like in autumn of 2012, and by late autumn, i was looking for donor bikes, as well as key parts that I knew I would need to buy.

I finally found and purchased the donor bike at a salvage auction in late spring 2013 and immediately got to work. It was only a partial bike due to the severity of the accident in which it was involved, and it was sold without a title, as parts only. It took about 2 months to build, half of which was spent waiting for parts to arrive.

I built this bike for my wife, Kate Ashton, though she didn’t know it until I gave it to her after it was finished. I named the bike Chimera, in reference to the fact that it was built from about 6 different motorcycle models. My ‘branding’, if you will, Ashton Technica, is a statement that building modern bikes is not just mechanical anymore, it is technical; including mechanical, electrical and electronic components, requiring an ability in all those respects.