Many of the leading motorcycle blogs are awash with beautifully built and creative custom Triumph Twins, hand crafted by pro-builders the world over, builds which are a credit to those who created them. 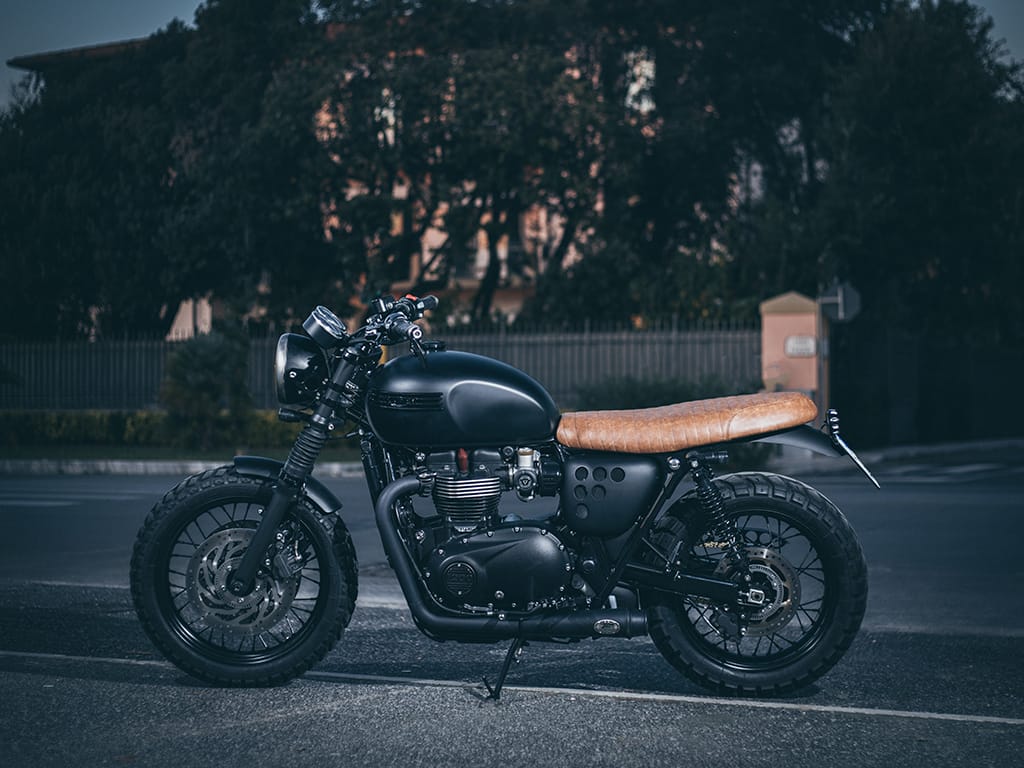 Some of these customs are commissions from Triumph UK to promote their new liquid cooled machines. But how relevant are these commissions to Triumphs current or prospective customers? Pro’s build to make a name for themselves in the custom motorcycle world, while Triumph are involved to look cool and attract media attention to their new motorcycles. 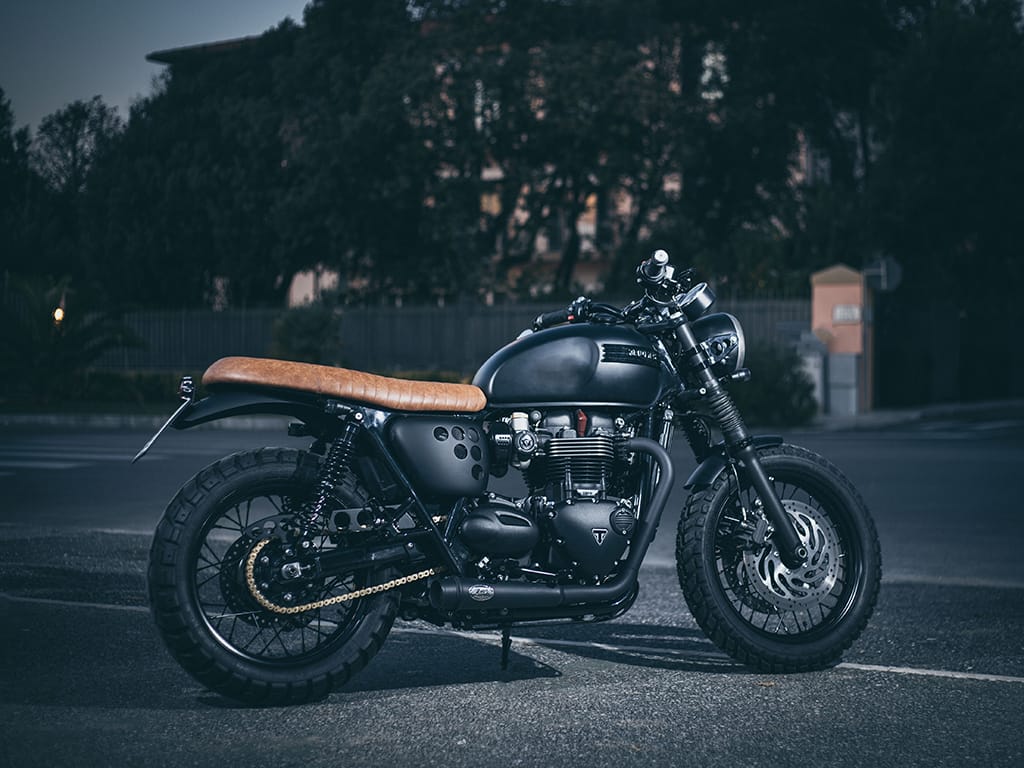 But what about the majority of people not given a motorcycle to modify, or cant afford to employ a pro-builder –  enthusiasts who spend there own hard earnt wage on a Triumph Twin they will actually ride.

For us in the real world there is an ever growing range of reasonably priced aftermarket parts and accessories to turn to. A range so extensive you can build a great looking Triumph Twin, which wont break the bank, cause a divorce or involve chopping up a perfectly good motorcycle to make a statement. 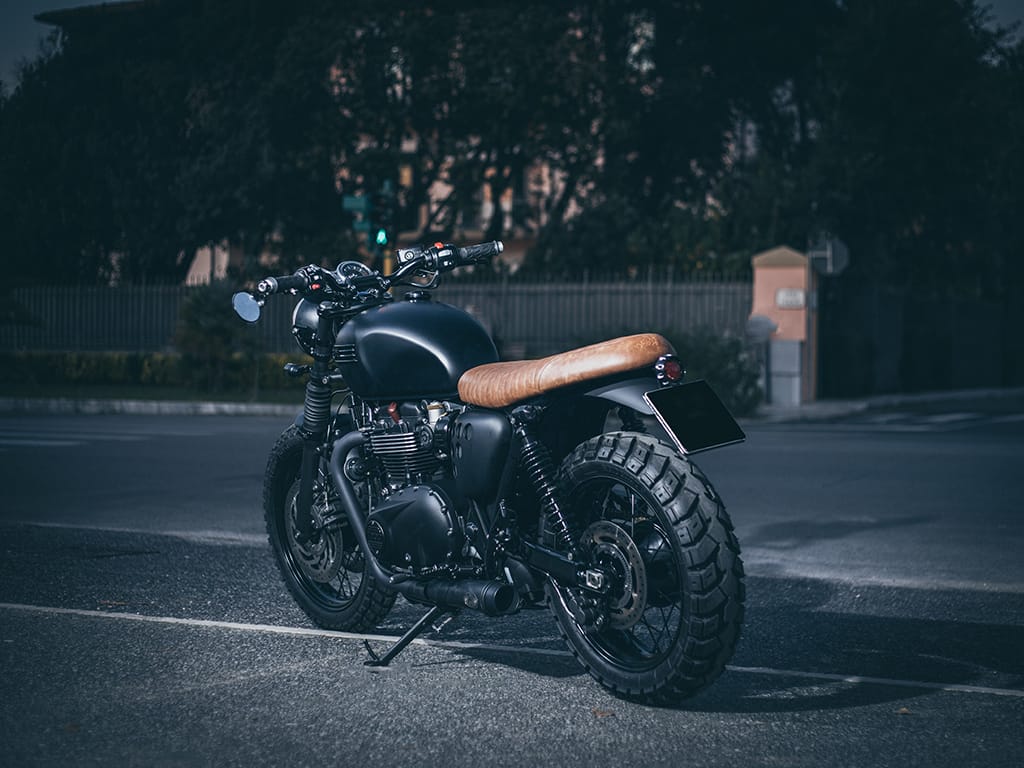 Owners not wishing to undertake the work themselves can employ a Triumph dealer, a more expensive option, but unlike a pro build, the costs are far more reasonable. And if your lucky you may employ someone like Raffaele Ferraro of the Massa, Italy based Triumph dealer Alo’s Group, who built the Dark Side, a build based on a new 1200cc T120 Black, put together for client Matteo D’Angiò. 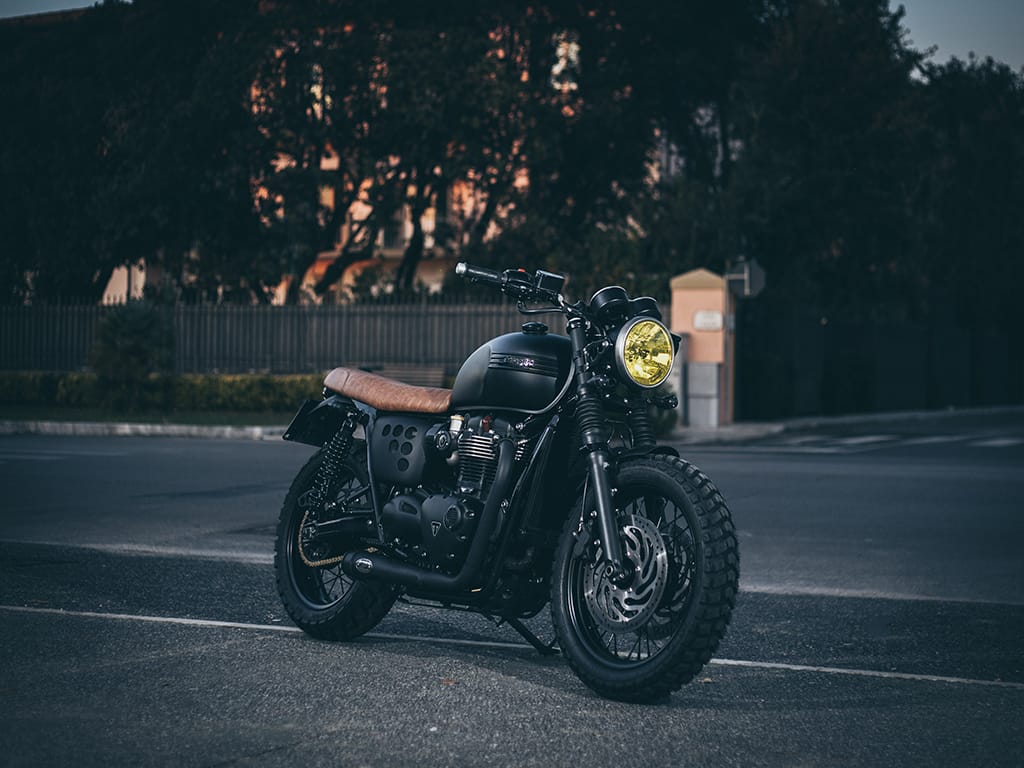 This Triumph T120 features all the right parts in all the right places – the frame remains untouched, yet the back end still looks good. The rear mudguard like the front has been slimmed down, with the rear being fitted with an LED tail-light. The cognac coloured seat is one of Alo’s Groups own products, made in-house and available to buy, its custom, but you can have one too! 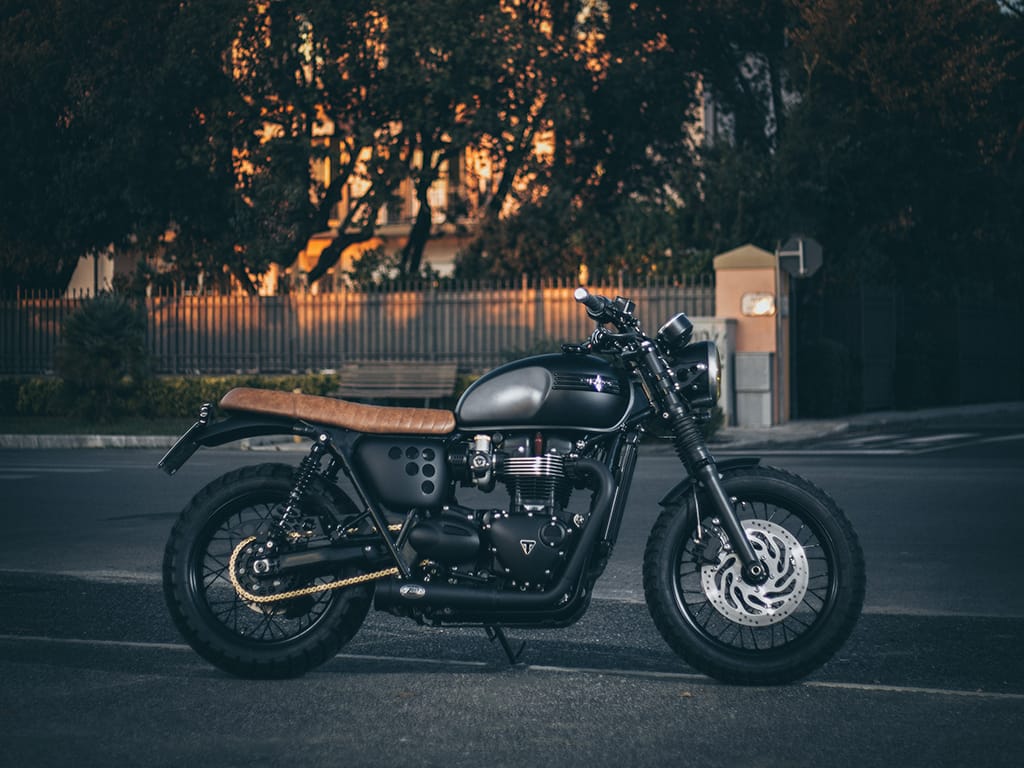 Up front, the solid retro style headlight bracket has been replaced with a set of Billet Headlight ears from British Customs, who also supplied the turn signals both front and rear, mounted to the T120 by Alo’s own mounting brackets – which when combined do a nice job of cleaning up the front end.

On the bars, the stock levers have been changed for a set of LSL levers in black, with a Joker Machine folding mirror replacing the Mickey Mouse items fitted at the factory. British Customs range of goodies has again been raided for a reservoir cap, bringing the bar mods to an end. 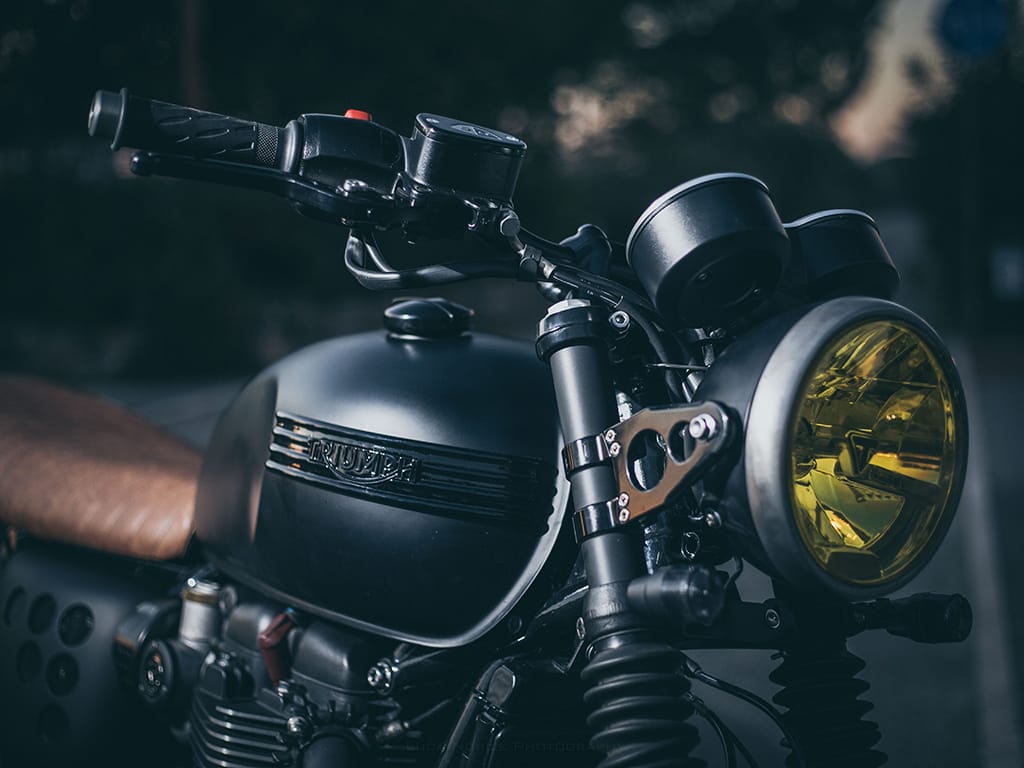 Joker Machine supplied the gnarly serrated foot pegs adding to the Scrambler vibe, a minor touch which many miss, but the devils in the detail – while we are focusing on those details, this T120 has been fitted with a contrasting Gold DID chain, adding some colour, covered by a Alo’s Chain-guard. 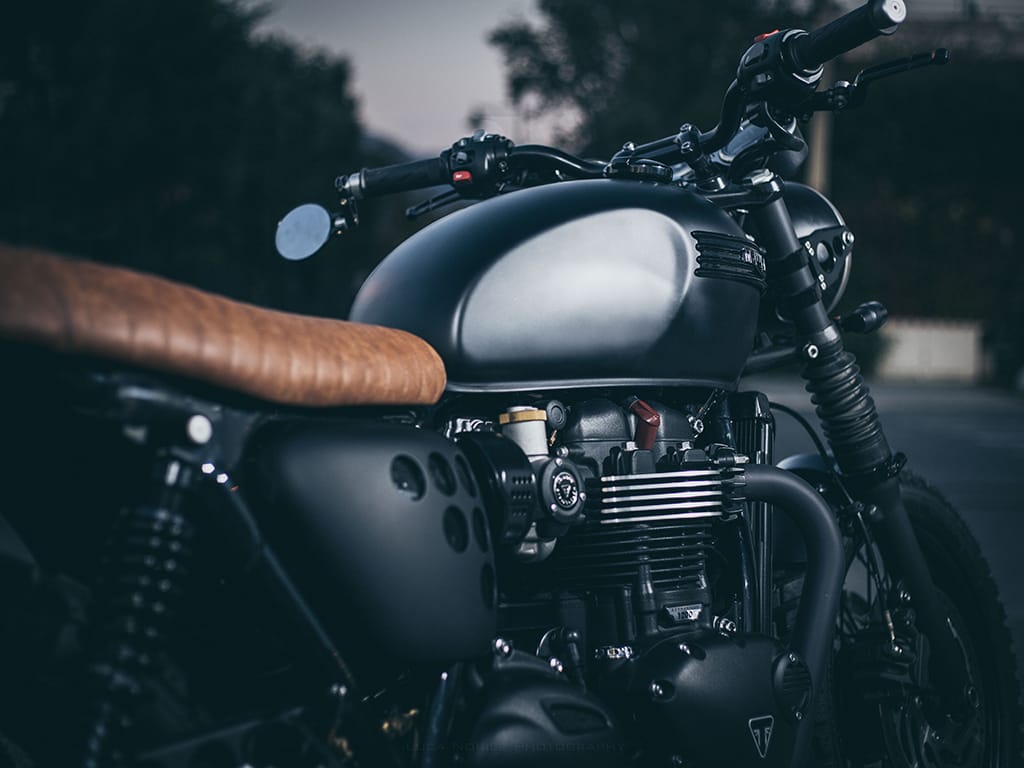 While underneath the Twin, and keeping up that all important Scrambler vibe, is an Alos Skid Plate. One of the first modification many of us do to our Classic Twins is a suspension upgrade, sixteen years later little has changed with this  T120, upgraded to a set of black Bitubo’s. 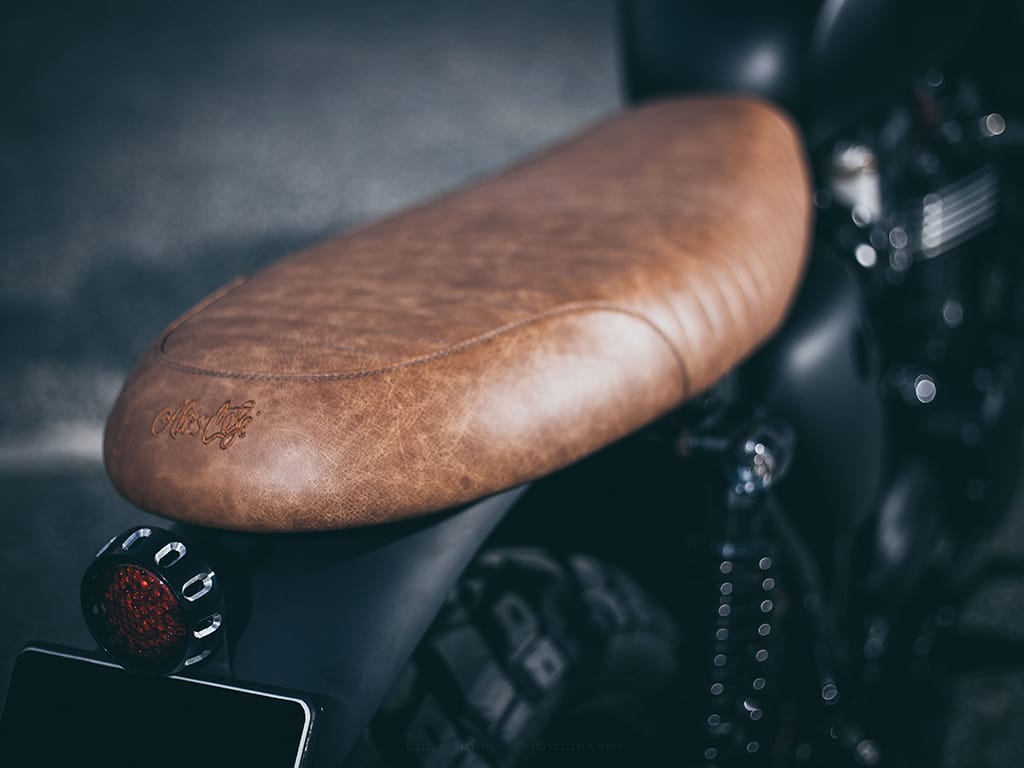 The Dark Side has been re-sprayed from ‘Jet Black’ gloss, to a flat-black, which oddly Triumph don’t offer as standard on the T120. The tank has then been topped off with a black Monza style fuel cap and a set of black painted Triumph 4 bar tank badges. Other styling touches include matt black vented side covers. 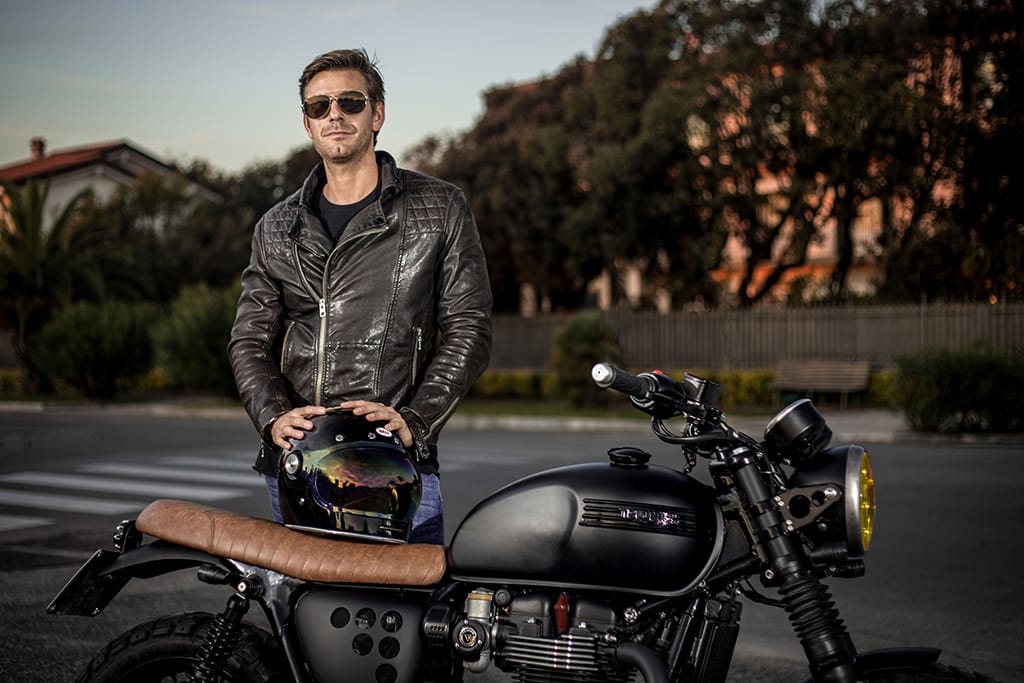 Finally, the Exhaust system on the Dark Side is Zard’s new 2>2 Low System made for the new liquid-cooled models, in black of course. A system which if their other products is anything to go by will make this T120 sounds as good as it looks.

This is an attractive build, easily emulated, practical for everyday riding, a build which won’t break the bank for those wishing to have something similar.