From Presicce in the heal of Italy, where Gianmarco and Gianni of Alea Motorcycles have been building custom’s for the last two and a half years, comes the ‘Black Sun’, a custom Triumph Twin based on a 2002 Triumph Bonneville. 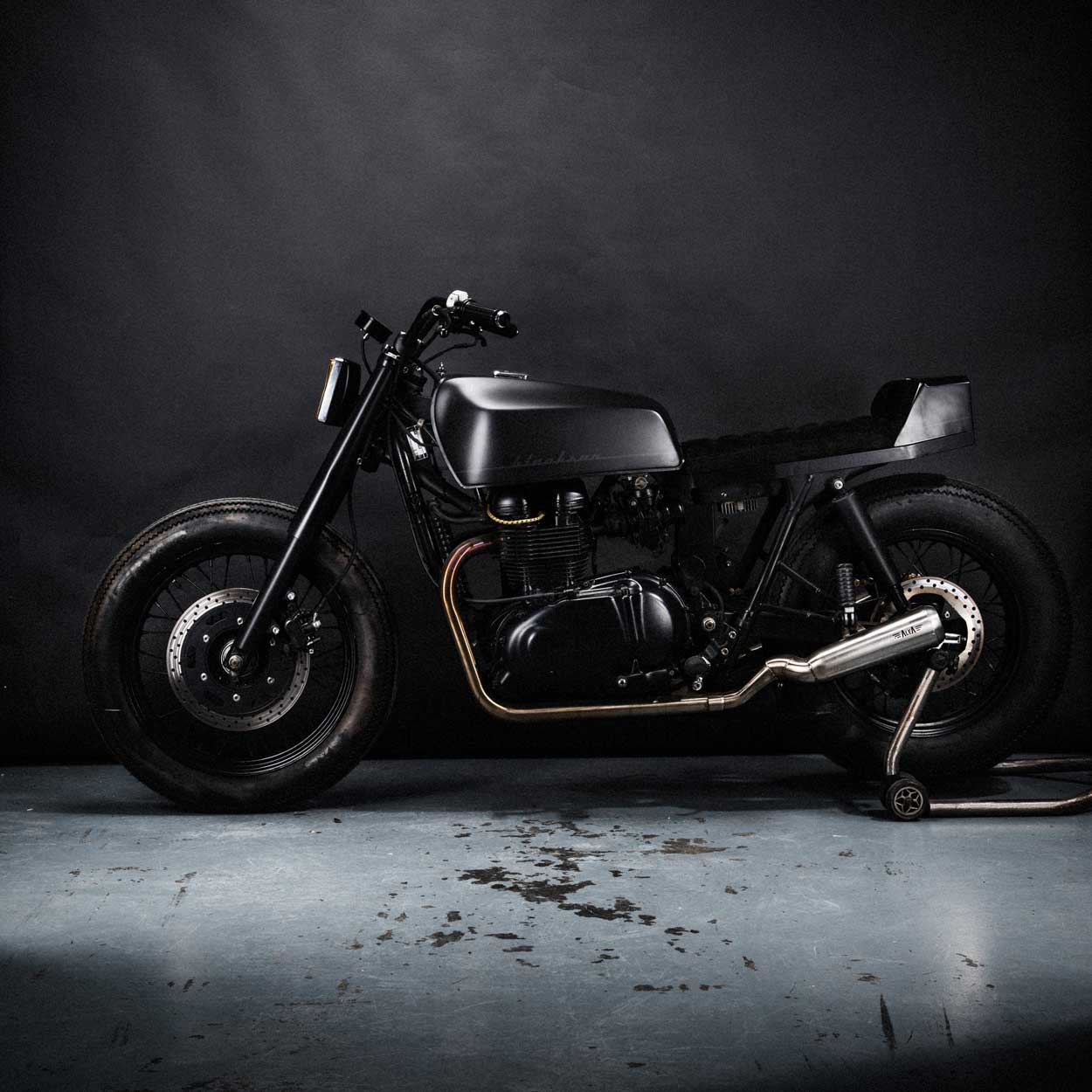 The inspiration for this build derives from an old square yellow lensed headlight found at the back of the Alea workshop. Around which formed an idea to replace a Bonneville’s curves with something a little more angular, perhaps something like a late 70’s T140?

Like many Hinckley Bonneville custom builds the duo started with the frame, cutting and shortening to get the Classic Twins proportions just right. To which a tank from an old Kawasaki Z was controversially offered up, modified to fit and painted black. 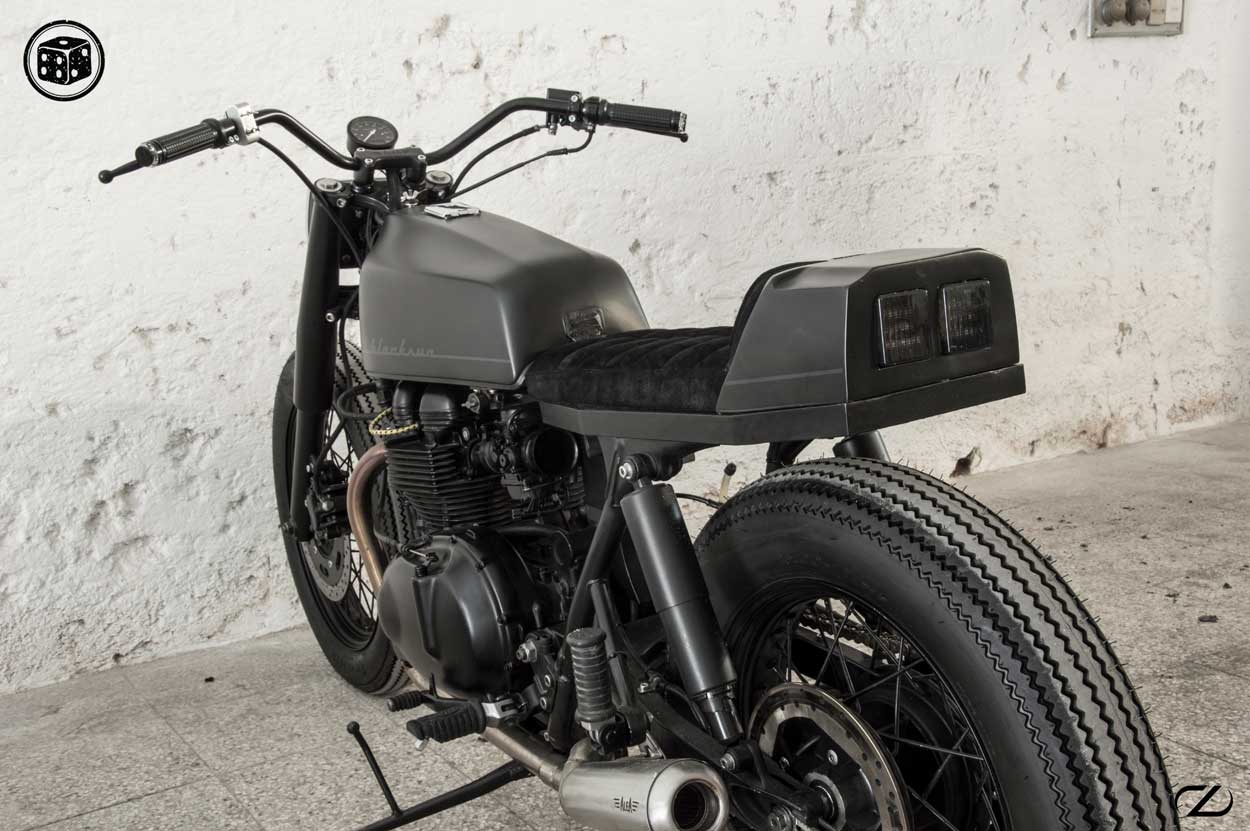 Behind that Kawasaki tank and painted to match sits a replica fibreglass seat cowl which the team imported from Japan. This was locally upholstered in square-stitched black suede and fitted with a set of square LED tail-lights. 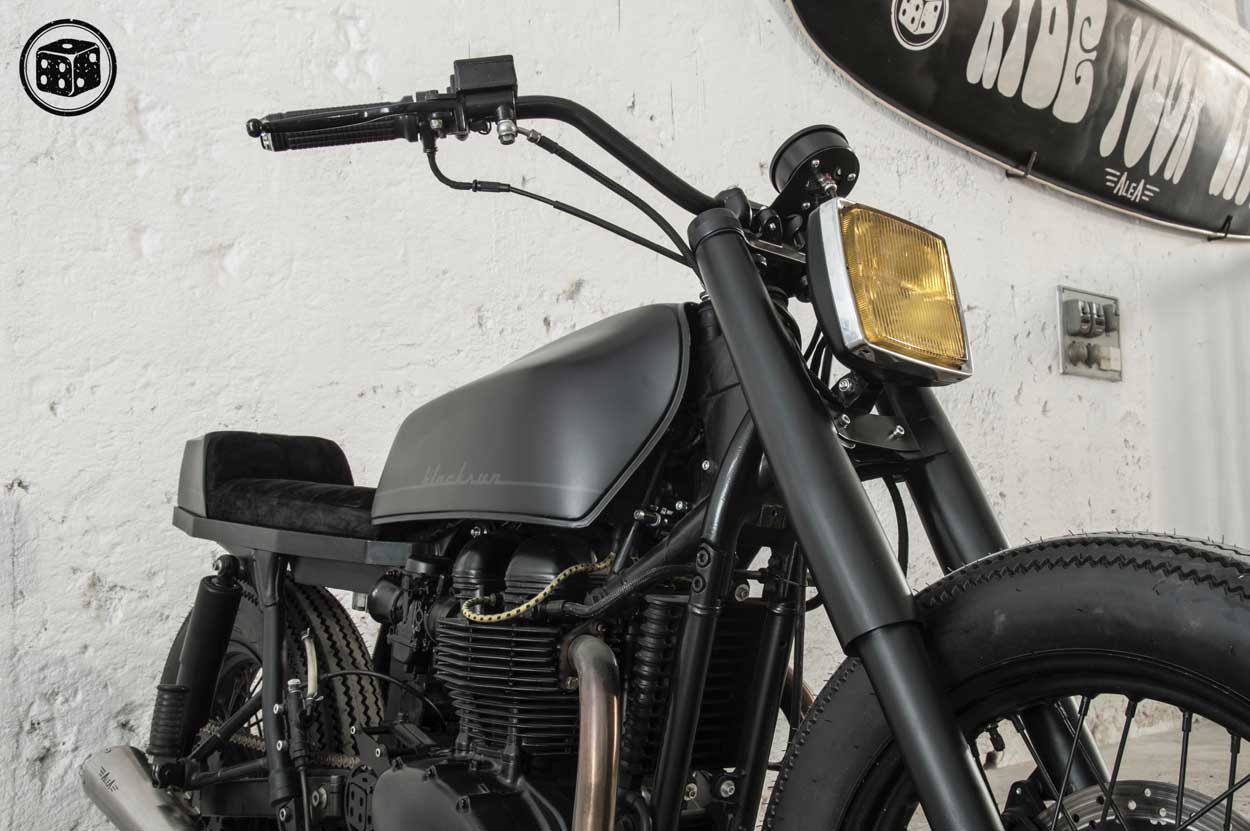 Below the seat-cowl is a stripped down see-through frame, achieved by removing the side covers air/battery box and relocating the wiring. A smaller low profile battery-box was then fabricated from aluminium, and now houses the bikes igniter and ignitions system, with the rectifier being relocated out of sight to under the new container. 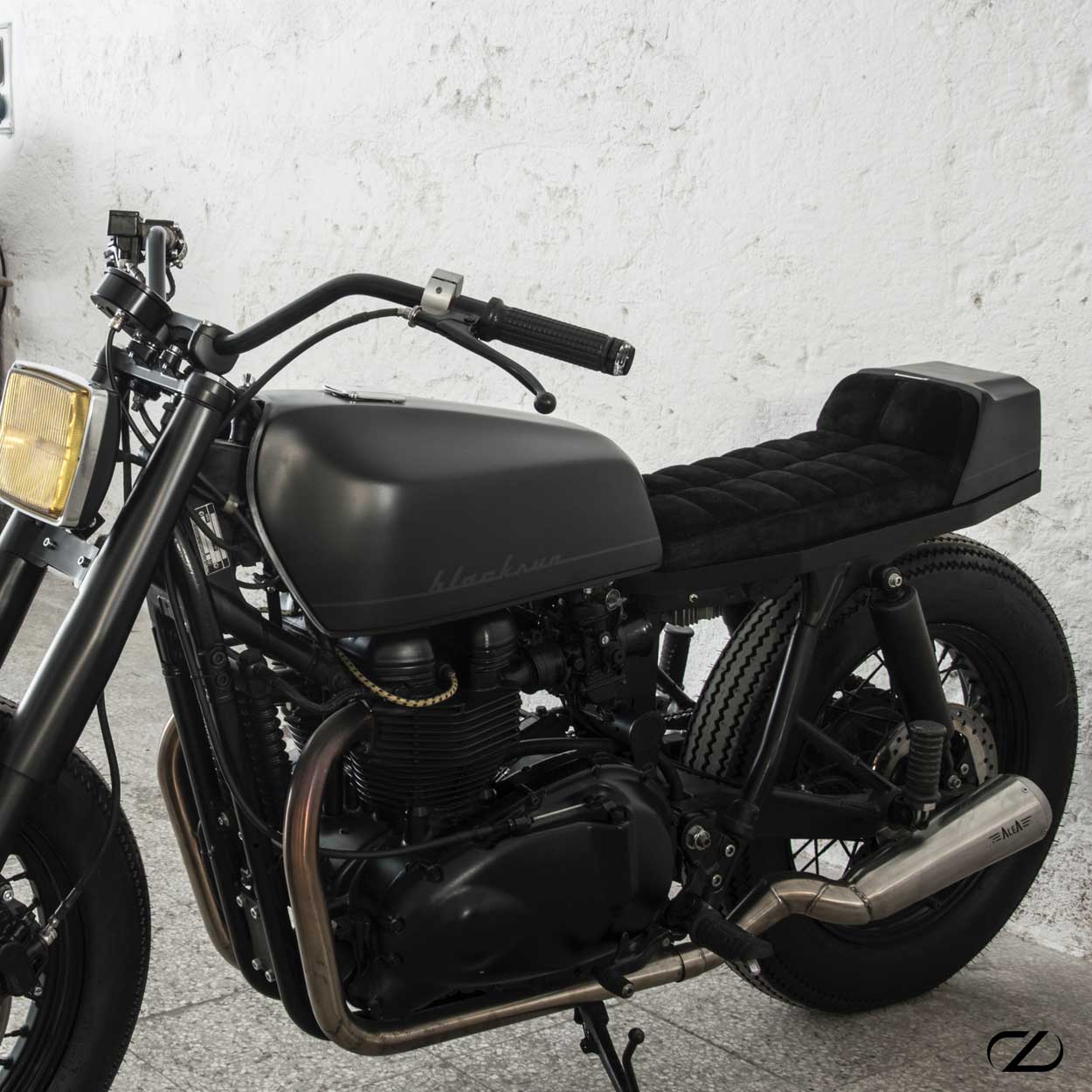 These preferable and far more basic carb model Bonneville do not share the same level of electrickery as their EFI brethren, making their modification and maintenance far less complicated – this helps with the relocation the ignition system and the swopping of the gas tank, which on the carb models Twin doesn’t contain a fuel pump. 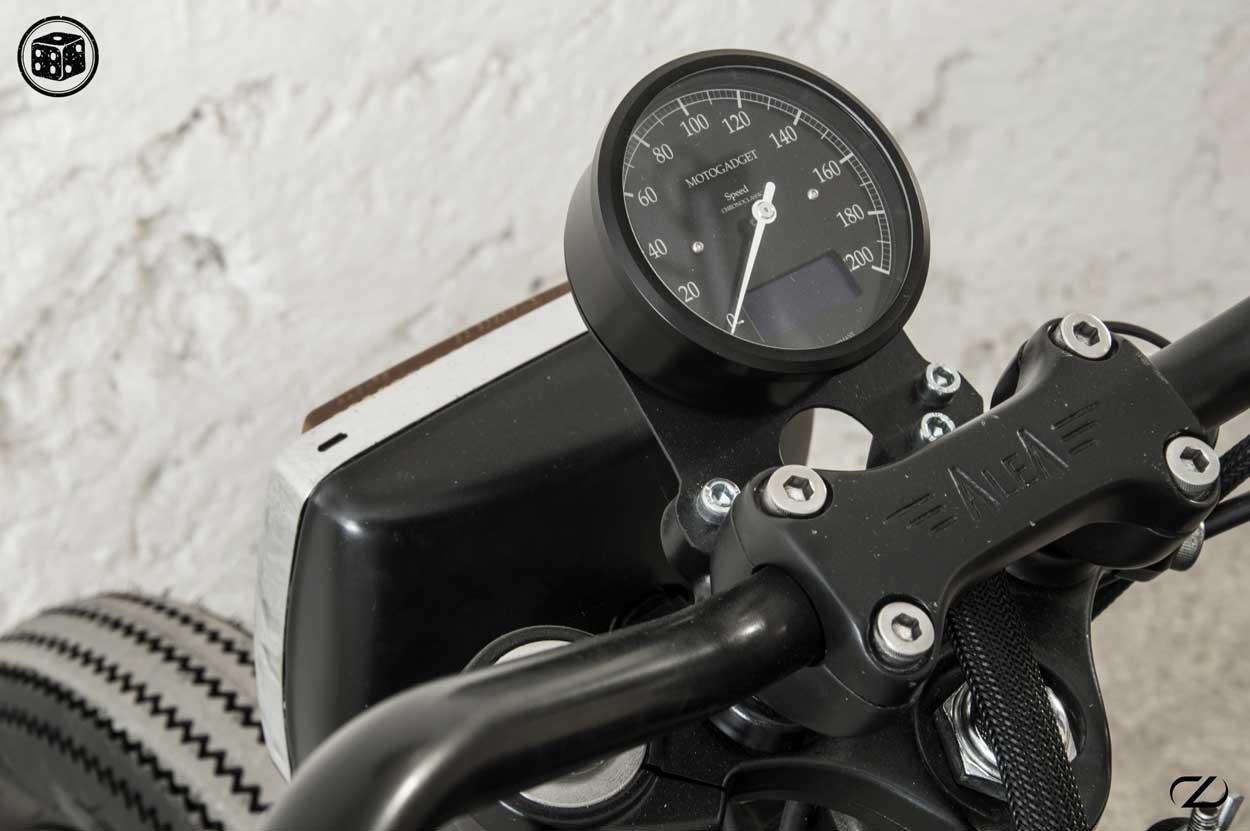 Behind that square retro headlight sits a beautiful Motogadget Chronoclassic speedo and super cool black sweeping bars, kept clutter free by fitting Motogadget grips, turn signals and custom switches – the wires for which having been fed through the bars, helping to ensure that…  ‘there are no superfluous wires hanging around the bars and headlight’.

Adding to this Triumph Classic Twins already vintage style are a set of black fork covers, giving an early Bonneville vibe. Which when paired with a set of similarly shrouded rear shocks, help to reduce this Bonneville’s unwanted shine. 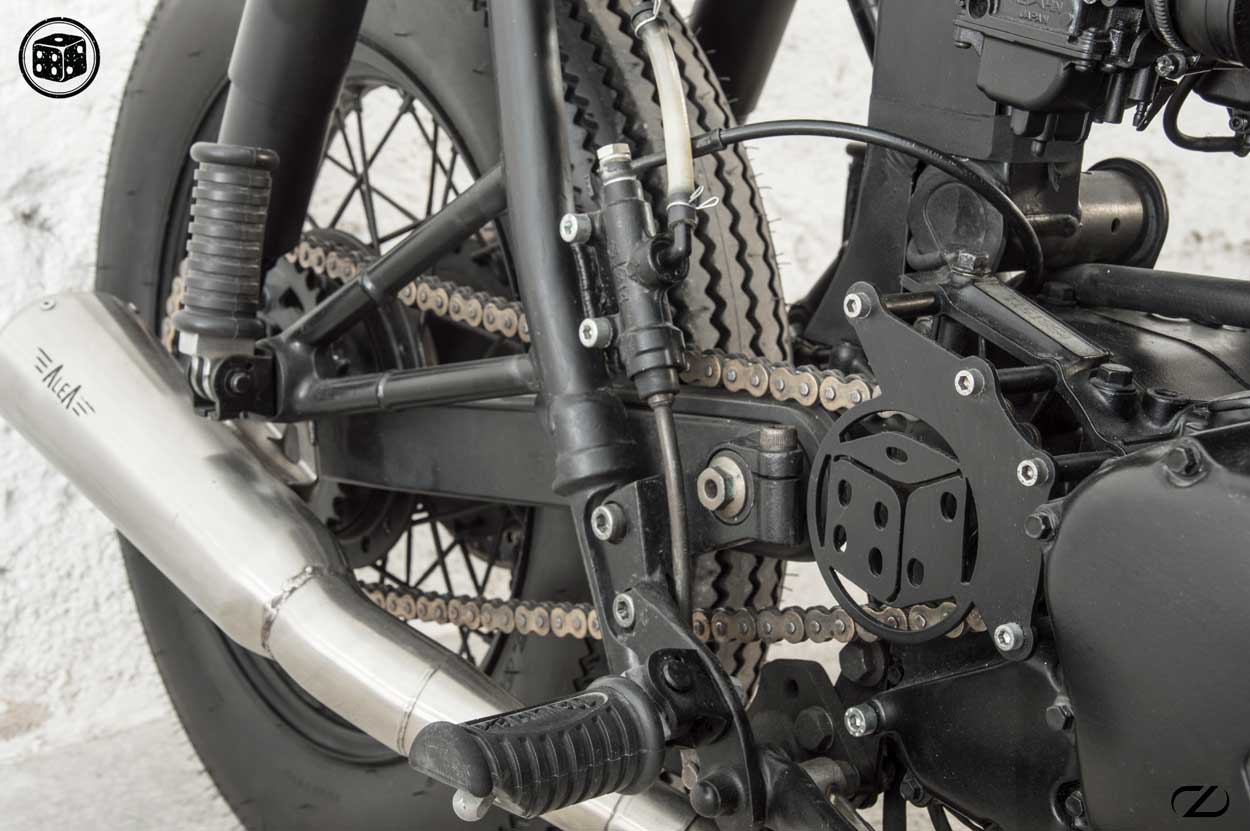 The de-blinging continues on the Black Sun with the painting of the stock carbs, engine, side and cam cover. With the sprocket cover being replaced by an Alea Motorcycles item finished in black. 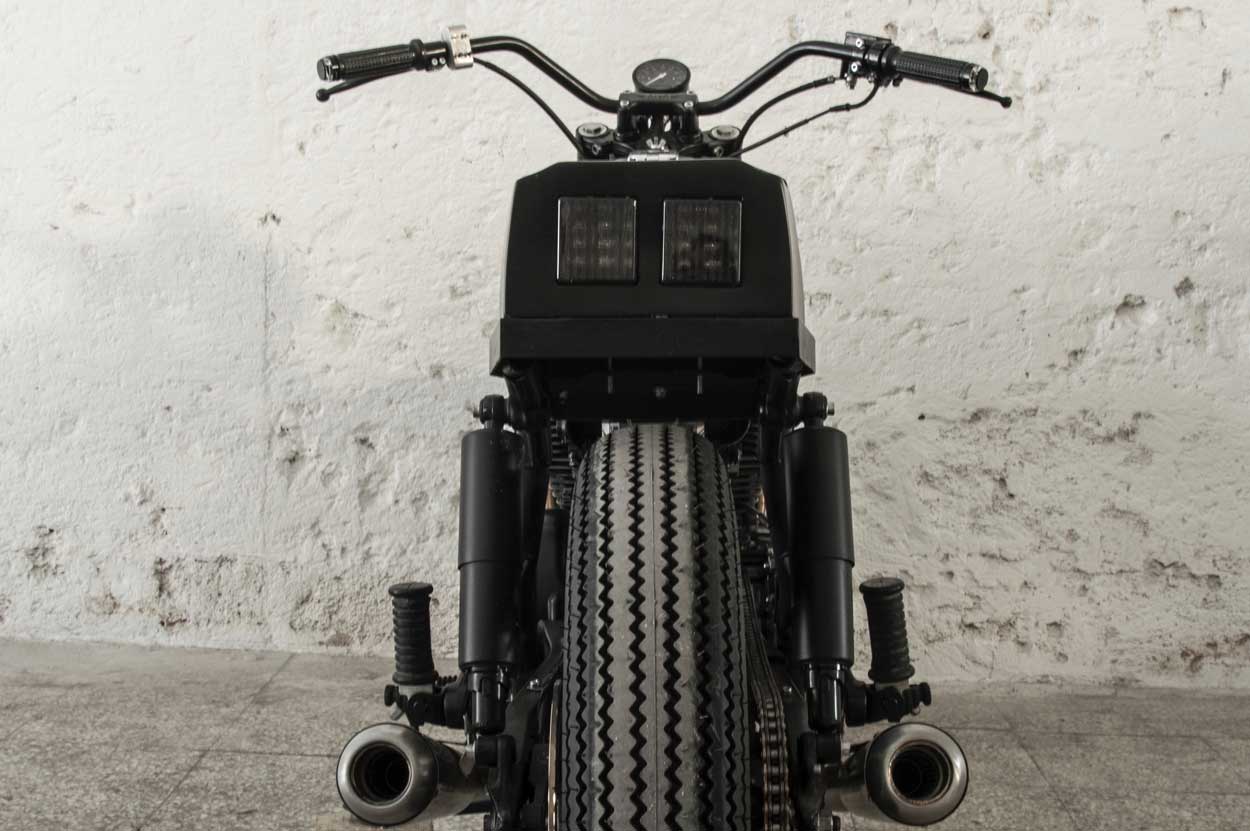 When it came to tyres, Gianmarco and Gianni chose to go for a set of TT Classics, vintage tyres like these may not be to everyone’s taste, but I feel they do what they are meant to do… add style!

Overall an interesting build, one that gets a thumbs up from me.