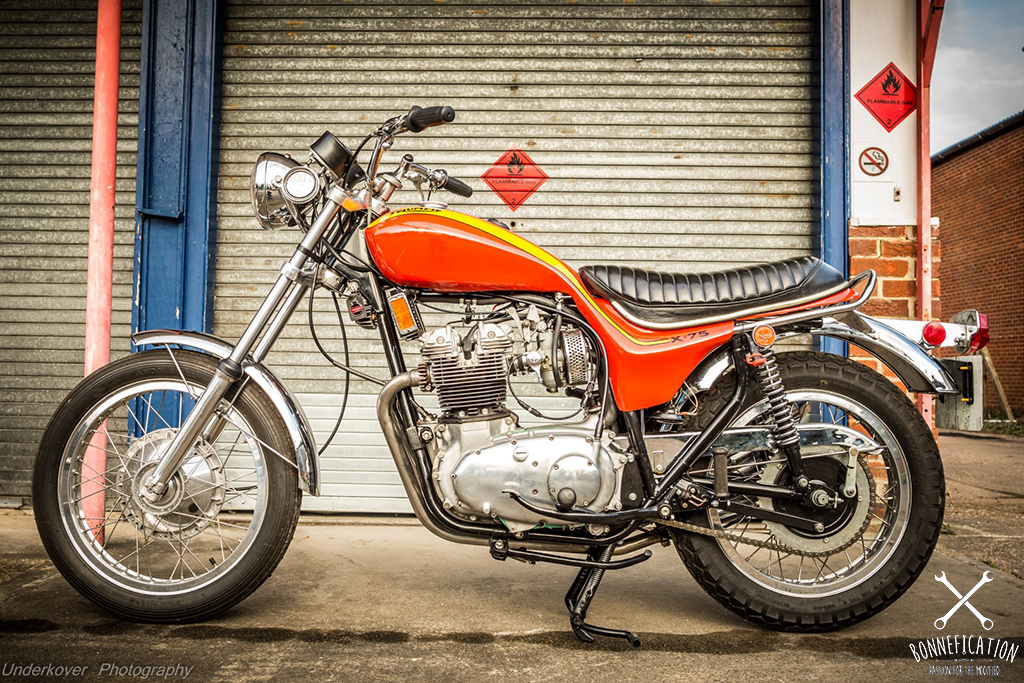 Bonnefication is very much about the modern ‘Retro‘ classic Triumph Twin, its what I know. Classic Triumph’s on the other hand I know very little about and perhaps thats something that need to change. (any assistance excepted) After all they are what give us modern Retro classic lovers our inspiration. 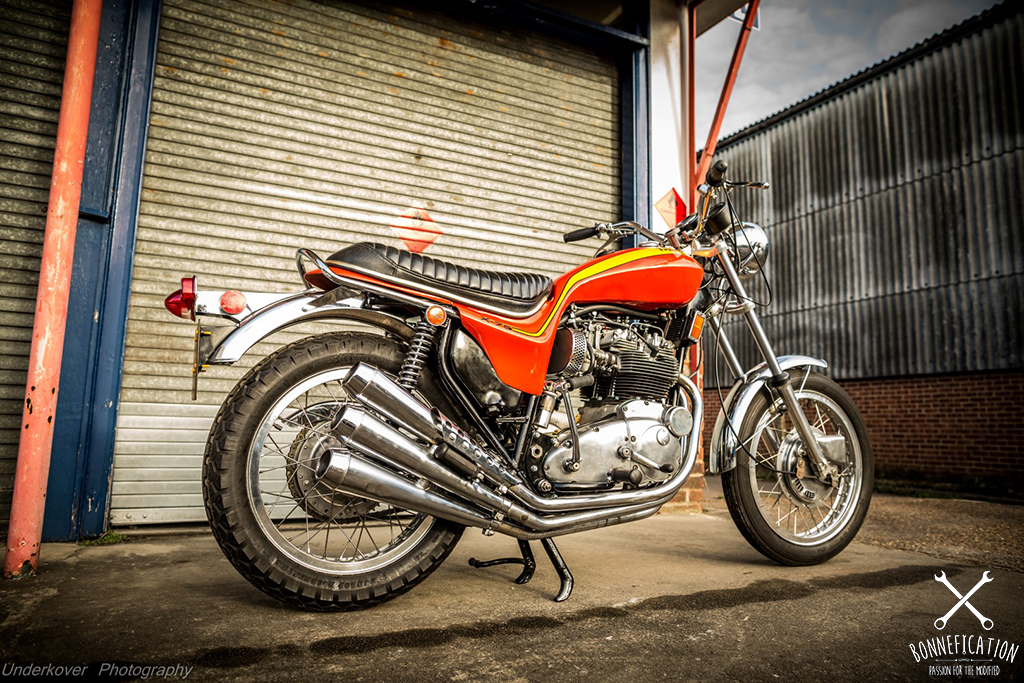 Also the bikes in Triumph’s ‘Classic‘ range only sport two cylinders, Bonnefication doesn’t get to feature to many triples – These two factor will limit the amount of bikes Bonnefication gets to feature, yes we could write about the odd custom Speed Triple, or we could feature some true Classics. So to start with why not one particular Triumph Triple which could be described as one of the best factory customs to wear the Triumph badge, but it’s not an easy ride for this ‘Triumph‘…. 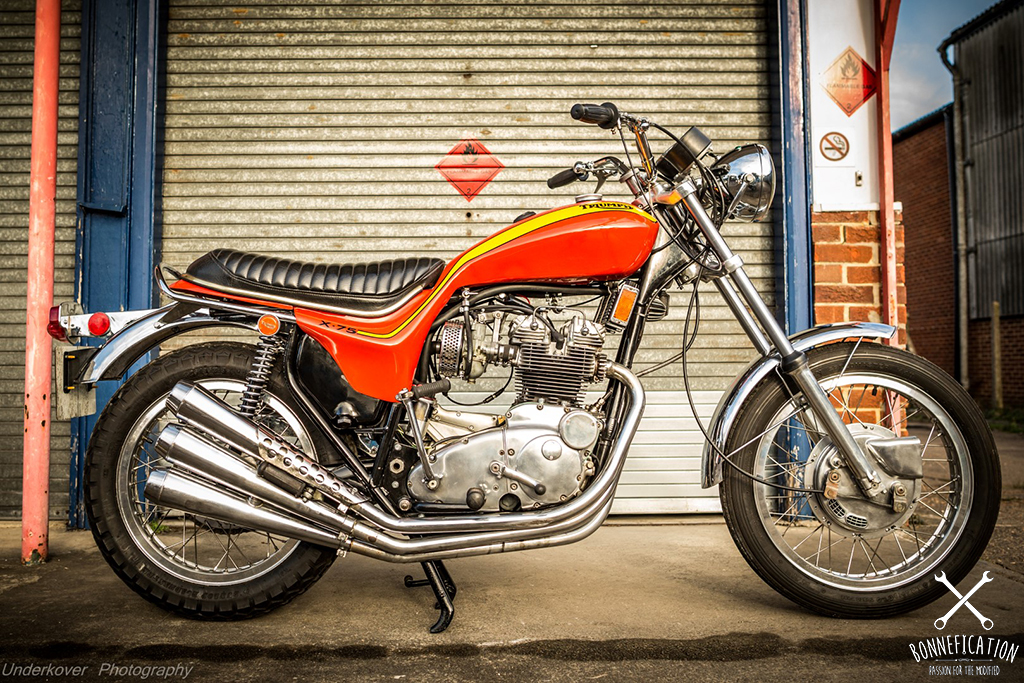 When the BSA Rocket 3 and Triumph Trident were released in 1969 they were not well accepted, especially in the key USA market. In many ways they were overshadowed by the Honda Four and they were also deemed to be unattractive appearance wise relative to the class-leading styling of their stablemate, the Triumph Bonneville. 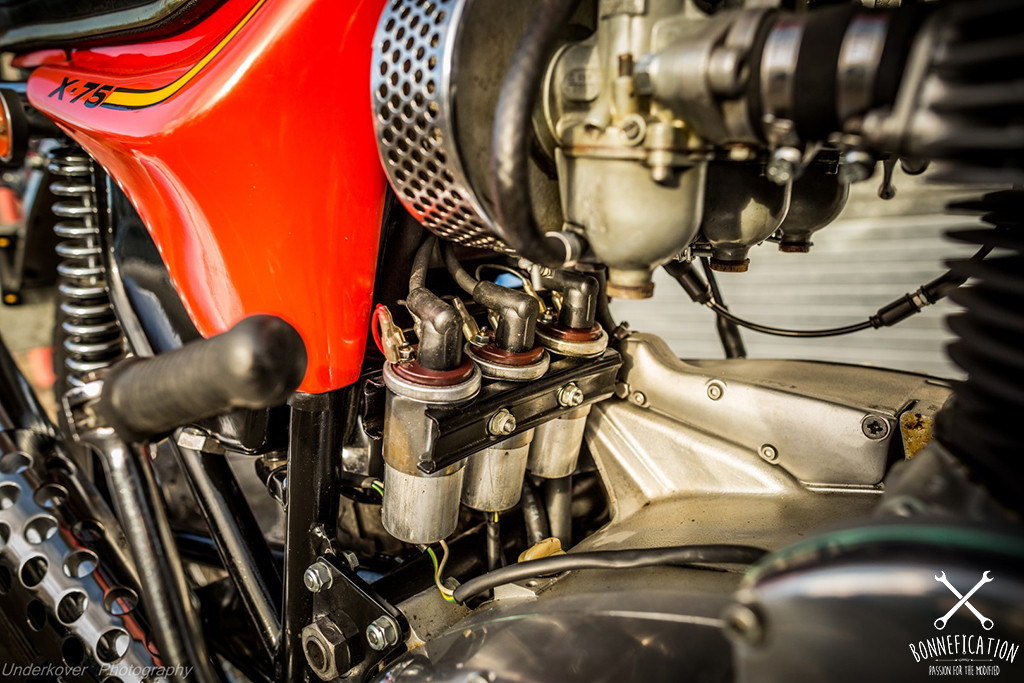 So BSA USA commissioned the young fairing designer, Craig Vetter, to do a complete restyle aimed at the US customer. Vetter reworked the entire bike with the most outstanding feature being the one piece fibre glass body which incorporates a steel tank. 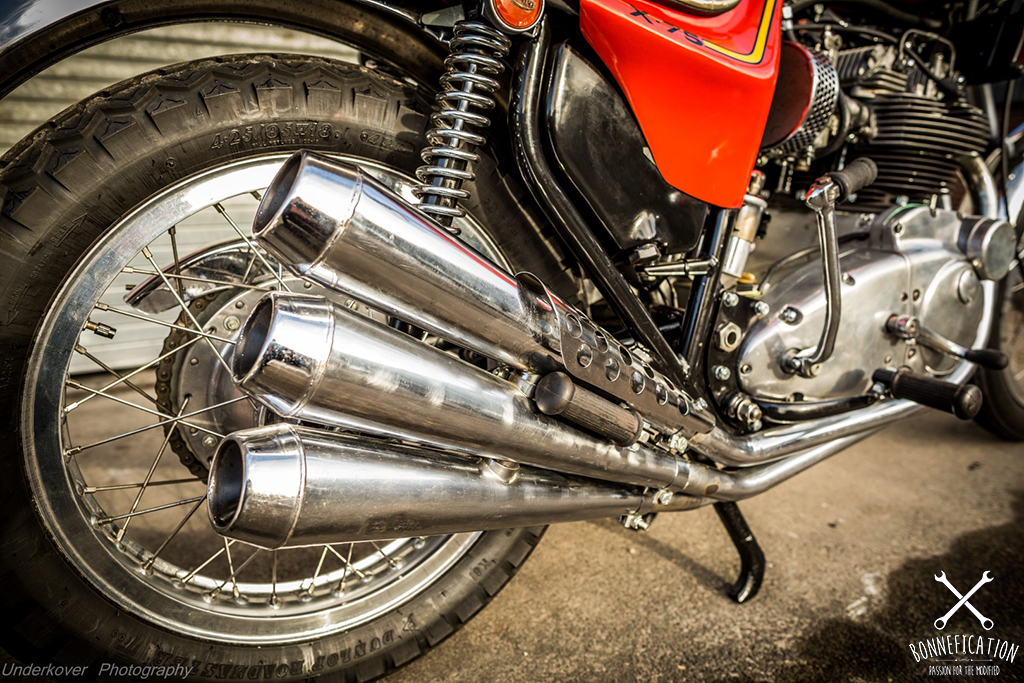 Also distinctive are the triple exhaust on the right side plus larger finning to give the engine greater “presence”. This together with almost modern cruiser style rake and handlebars, the 70lb weight loss relative to the original Rocket 3 and a radical paint job meant that this would become the first factory custom. 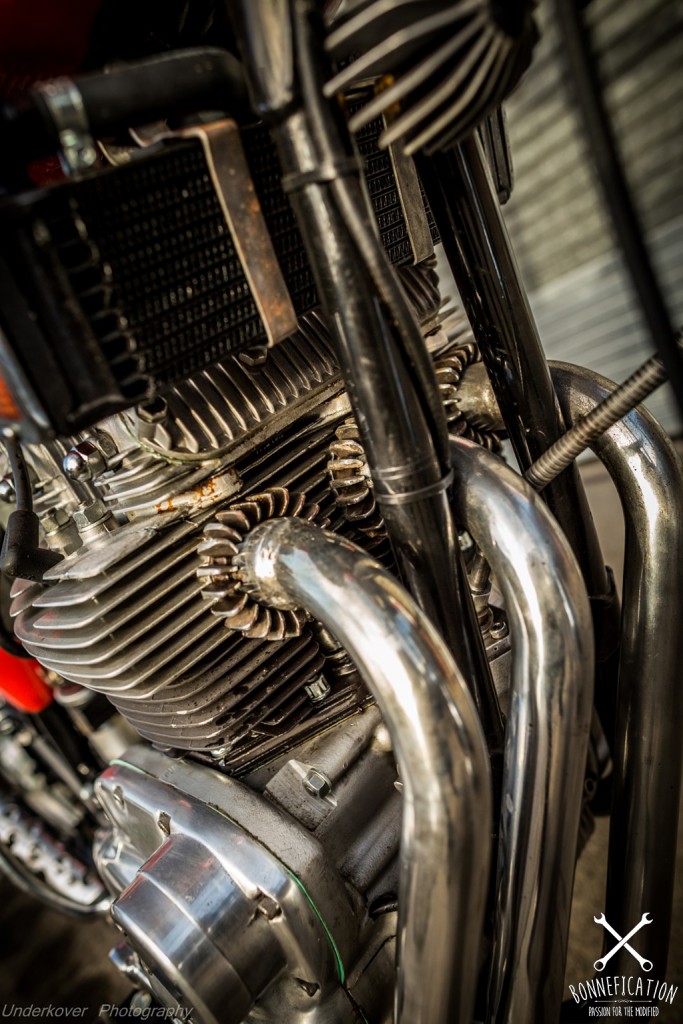 The design was submitted to BSA in the UK but went nowhere. Then the end arrived for the BSA marque and Triumph, now in desperate need of some design inspiration, seized on the Hurricane and put it into production in 1972. During 1972 and 1973 some 1,150 BSA Rocket 3 engines (see the BSA engraving behind the engine number) were set aside for Hurricane production and now branded as a Triumph. 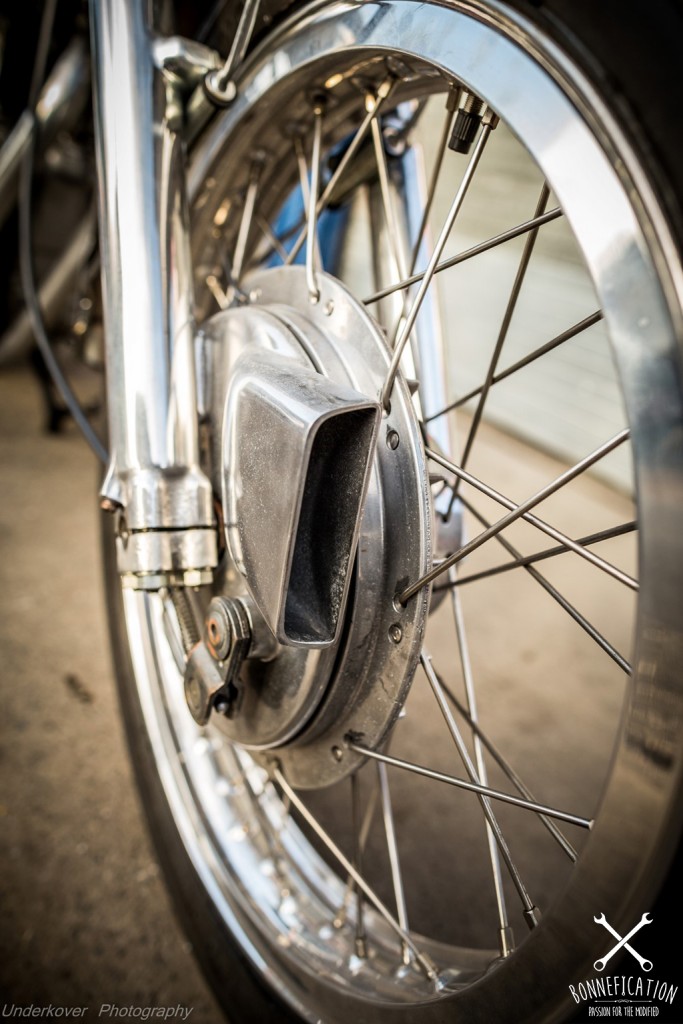 This Hurricane featured is a former USA market model with matching number and is part of Miklos Salamon’s thirty plus collection of motorcycles. A collection which is on display to the public at Miklos’ Guildford based 2WheelsMiklos workshop, where Miklos restores and customises a range of motorcycles, some of which have been features on popular ‘New Wave’ motorcycle websites. Miklos acquired the Triumph in the UK in 2013 almost fully restored, with Miklos being left with getting the X75 to run well and be oil tight, which included redoing the carburettors and a re-bore. 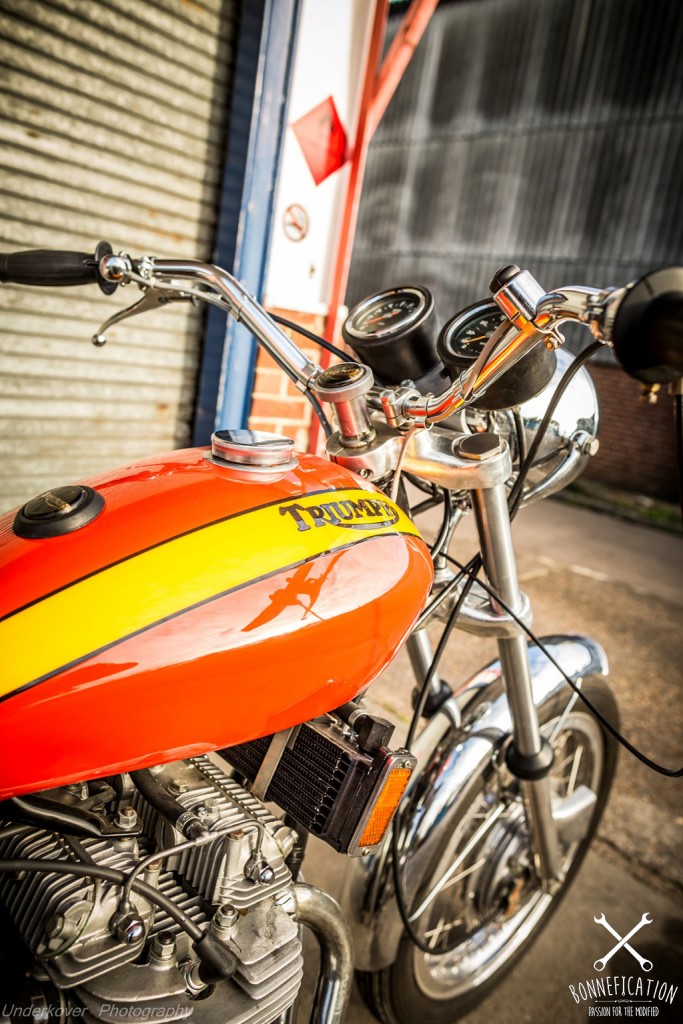 If you want to see the Hurricane as well a Miklos’ other bikes, then you are in luck as 2WheelsMiklos are having an open day on the 25th July 2015 from 11am to 5pm. Details here

If you have a good example of a true Classic Triumph, why not submit your bike using this link