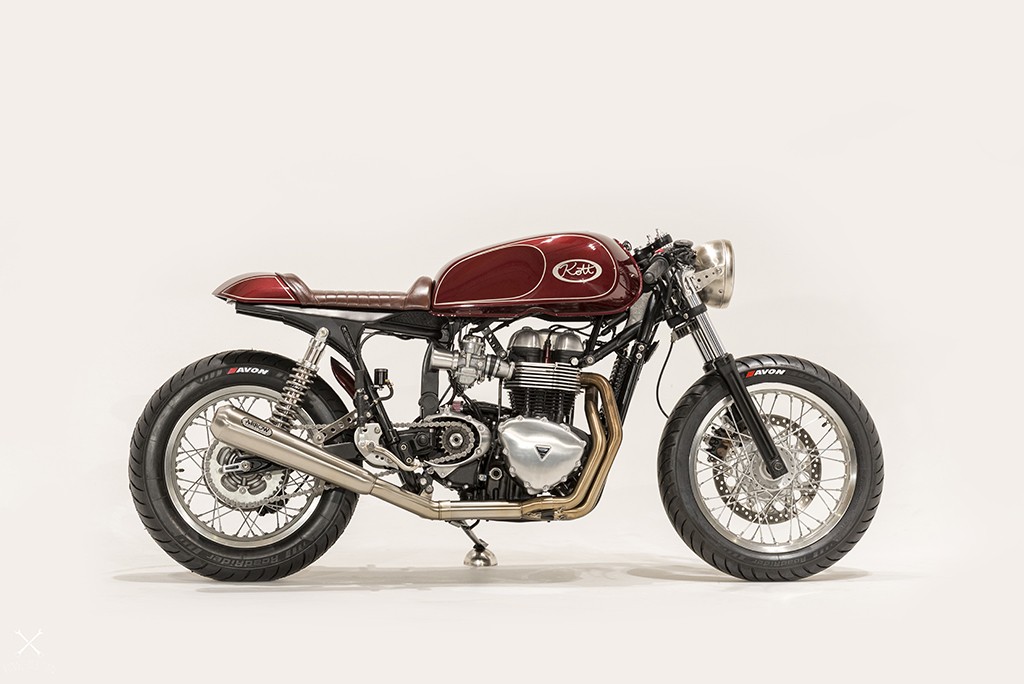 I don’t think we see enough Triumph Cafe Racers in the ‘new wave’ motorcycle scene, especially ones as good looking as this 2014 Thruxton Café Racer built by Kott Motorcycles for the actor Ryan Reynolds. Ryan is no stranger to the Triumph Twin, already owing a 2004 Bonneville. The actor is also no stranger to the world of the Modified Triumph, having changed the look and performance of the Bonneville several times over the last 10 years, keeping the press speculating if ‘Ryan has a new Bike’ or not. 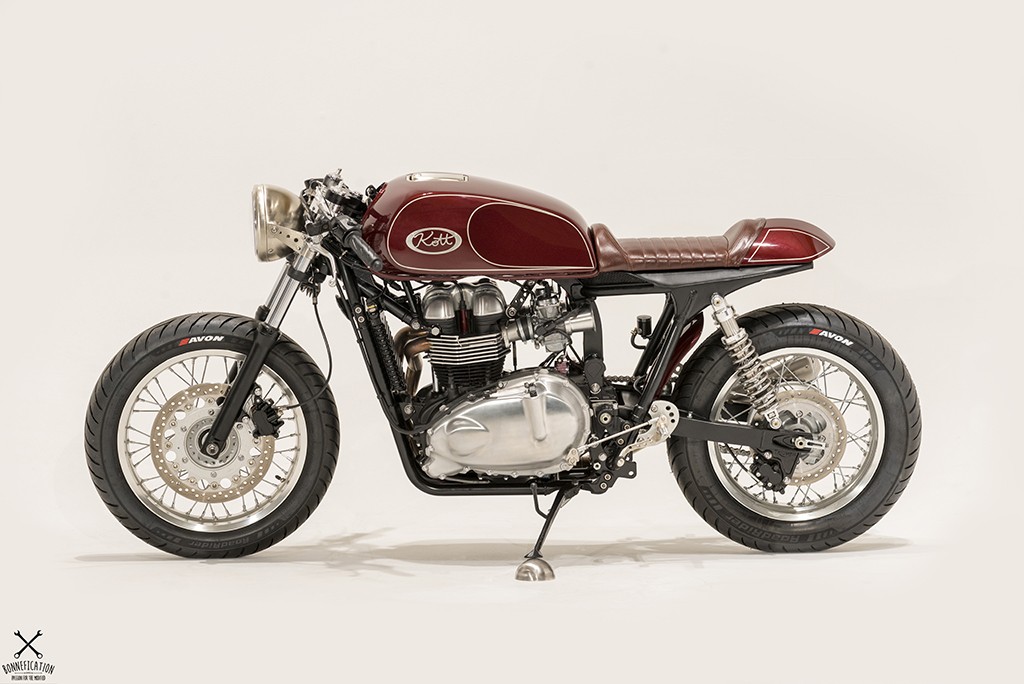 Im guessing that Ryan though it was time to give his much loved and much modified 04 Bonne a rest, not choosing to use it for the new Café build. Instead buying a new 2014 EFI Thruxton and turning to Dustin Kott, a man with not just an ’emotional connection‘ to motorcycles but also an awesome reputation for building Café Racers. 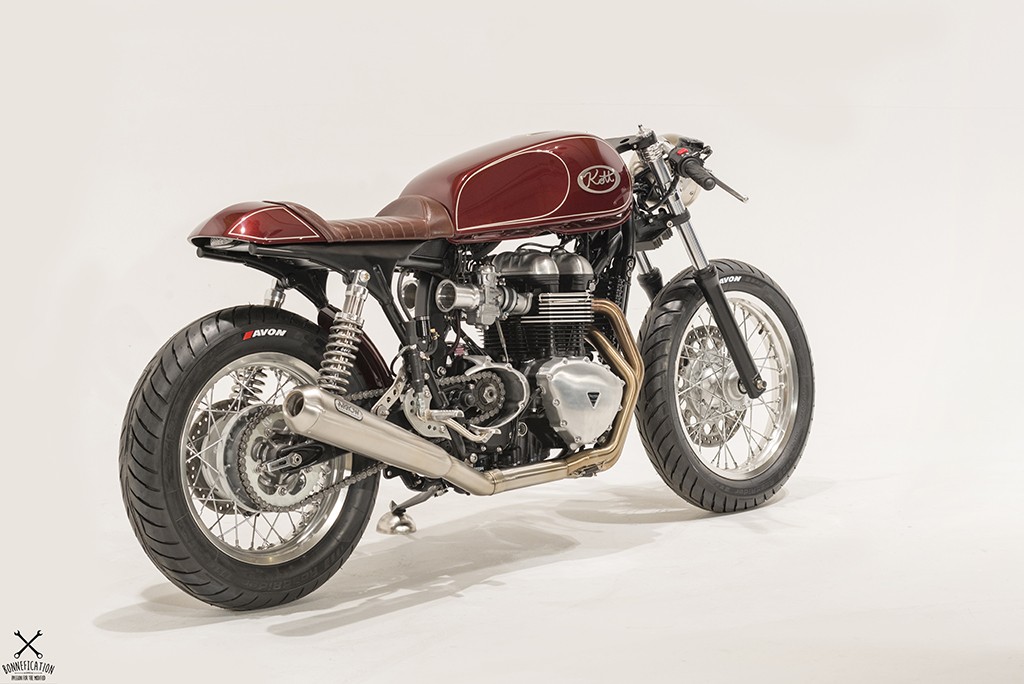 On receiving the Thruxton, Dustin took the bike out for a ride, wanting to get a feel of the Thruxton as Triumph had made it. As we know the Triumph Twin is a great machine out-of-the-box, but we also know that the bike could do with a few (many) upgrades to make it even better (if you don’t know this then I imagine you won’t be reading this, or of heard of Bonnefication) 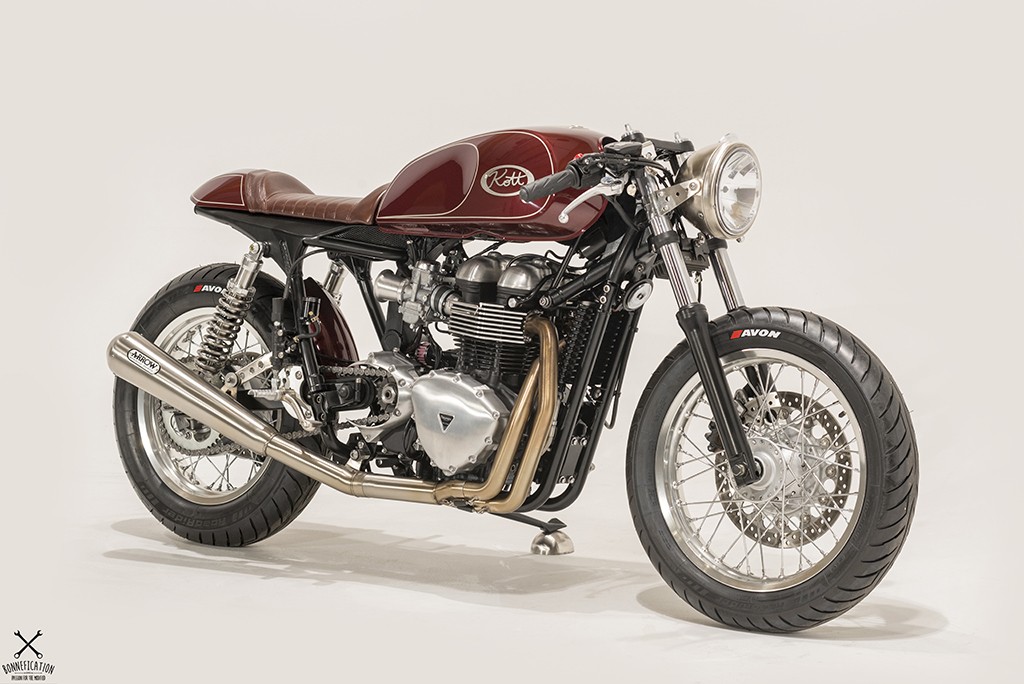 “After the first ride the idea was not so much to fix the machine but rather enhance the ride to the point of allowing the rider to feel more engaged, more required, and maybe slightly less docile. At the machines core is a frame of rigid and impervious design. The main issue that had to be addressed was the lack of cohesiveness regarding the height from the steering stem of the frame to the rear of the frame rails. The distinct drop of the seat height just at the rear of the tank mount truly disrupts the linear aspects of the frame and subsequently throws off the tank and seat arrangement” (this is an issue that was also confronted by Clutch Custom, on their build, but felt with in a different way. – Ed.)

The latter of which are arguably the most influential ingredients of the archetypal Café Racer. I have always empathised with manufacturing companies in so much as they are surrounded by the type of equipment that could build a space shuttle if they wished but have their hands tied up with legalities that inevitably collide with artisanship and bottom lines. None the less one of the most important aspects of the build was the increased appropriation of  height in the frame design that allowed for the straight line effect of the ever so important tank and seat combo. This frame modification, complete with perforated steel panels for cooling, also left a cavity of surplus space to rearrange the formidable wiring harness, ECU, fuse box, fuel injection module, and downsized lithium battery. All of which was and continues to be imperative for correct operation of the fuel injection system which, of course, posed the next series of challenges to the shop”. (Maybe Ryan would of stuck with the 04 Bonne?  – Ed.) 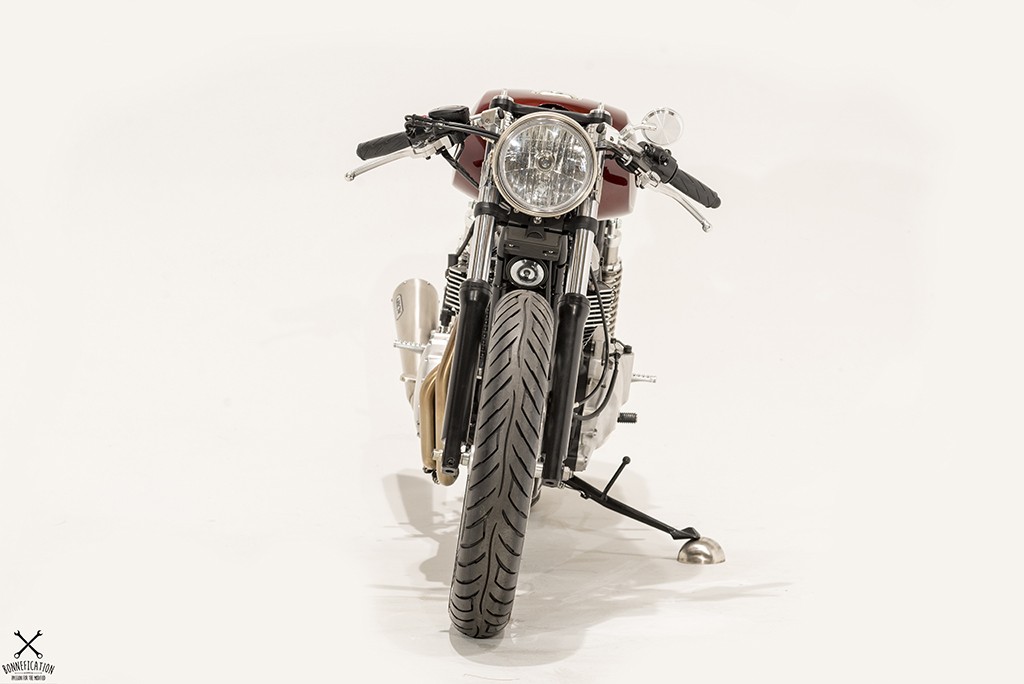 Another key feature and challenge of the build along with the frame was the selection of the vintage Japanese fuel tank. Where some may feel that fitting a Japanese tank on a British motorcycle is the final insult, (yes!. -Ed) our thinking was that of dimensional and aesthetic liberty. The late model XS 1100 fuel tank provided the appropriate internal space to retrofit the Triumph fuel injection system inside of it. It also allowed for a taller tank height to triple clamp ratio which always give the impression of desirable fullness. This tank choice promoted an opportunity for a relocation of the ignition switch into the vacant space between the square tubed backbone of the frame and the tunnel of the fuel tank as well. (nice detail. -Ed) What would a Kott build be without the signature round bar constructed seat pan and cowl? This was the final implement of form and function concerning the top half of the build. With a multitude of necessary electrical components left unearthed from their original positions the handmade steel seat cowl allowed additional room for several of them. 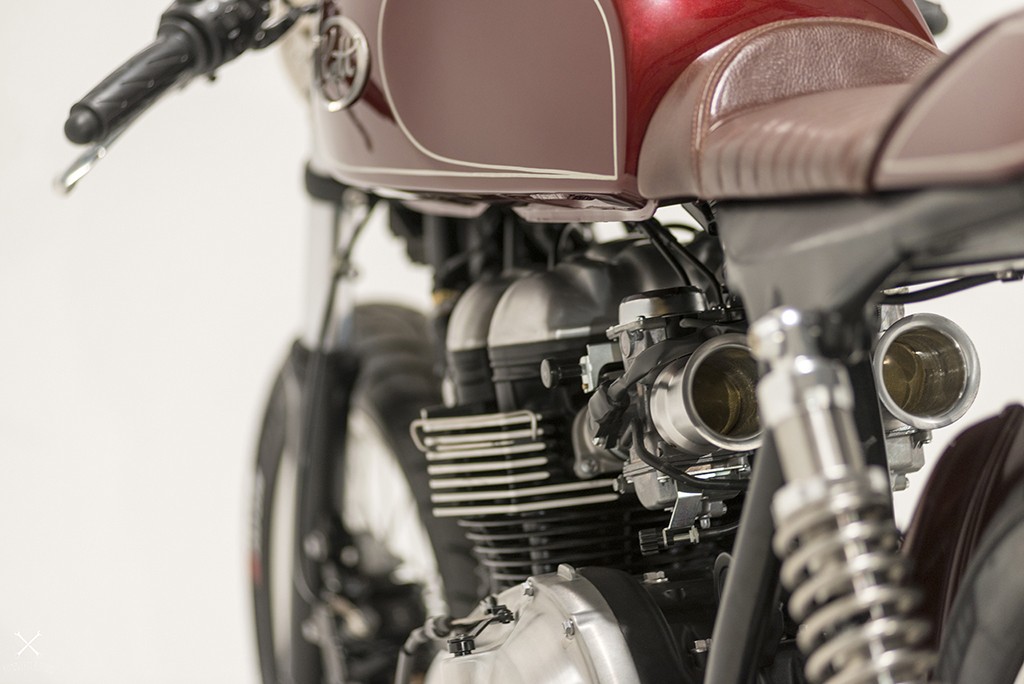 Along the bottom half of the build the first order of business was an improvement in handling. With the addition of the aggressive tread pattern and characteristics of the British Avon tires, a pair of the High performance Hagon shocks completed the British triple threat. A pair of  aluminium rearset plates were designed to allow room for the casting of the down tubes of the frame while still allowing for a more intentional riding position. Performance potential was maximised not only through a remapping of control modules but also through the stainless steel Arrow Two into One pipe selection that sounds absolutely brutal at speed!

As finish options were decided upon there was a definite intentionality in copying and repeating the Triumph vibe. As a default for overall design the idea was to promote a style of Thruxton that would look as factory as possible all the while redefining the overall stance and ride-ability. With regards to maintaining congruence to the factory brushed finishes of the motor, the majority of components on the build represent a brushed nickel and aluminium appearance. The candy brandy wine paint colour accompanied by a pewter gold pin-striping and red based club brown leather seat upholstery hearkens back to the infamous sixties era of the Triumph Marquee. As a final touch we decided to for-go the use of a speedometer and in its stead, hand stripe a reminder of the spirit of the Long standing Triumph name in the history of motorcycles: LIVE FAST” 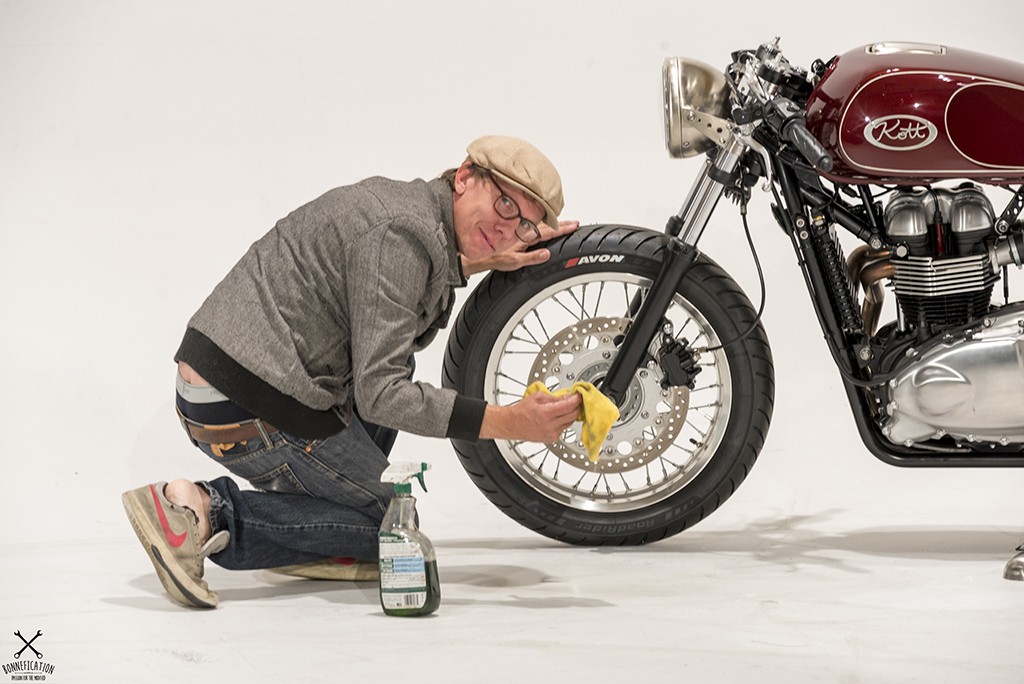 Running  over the bike, we noticed a few minor details we liked including; the rectifier being mounted under the bottom yoke, a place I’ve not seen it before and also a position that does a better job of hiding the ugly bloody thing. Other nice feature include the ignition location under the Japanese tank and on to the levelling of the frame section that Dustin mentioned,  a clever and practical modification and one that I fully expect to be copied, or perhaps someone may make a complete bolt-on seat/frame kit, who knows.

The fished machine is both a credit to Dustin Kott as well as Ryan Reynolds. Its really nice to see a ‘Custom” and not a ‘Modified’ Triumph Twin Cafe Racer. Don’t get me wrong regarding the bolt on market, but without those custom, hand crafted bikes to inspire, those aftermarket goodies would still be limited Lucas tail lights kits and headlight brackets.