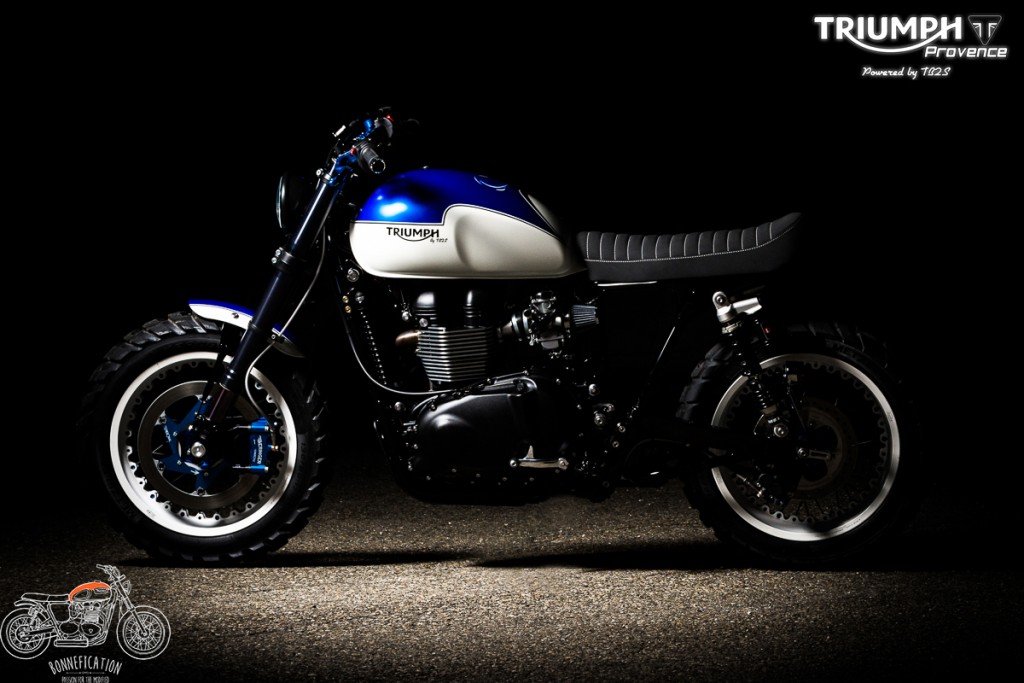 The link between surfing and motorcycles is pretty strong in some parts of the world and clearly with the monsieur’s at Triumph Provence who are the builders of the ‘Shorebreak‘, a build based on a late model Triumph Bonneville – Triumph Provence are the official Triumph dealer in the area and are based just outside the walls of the city Avignon in the South of France, a city which is short ride away from the coast. 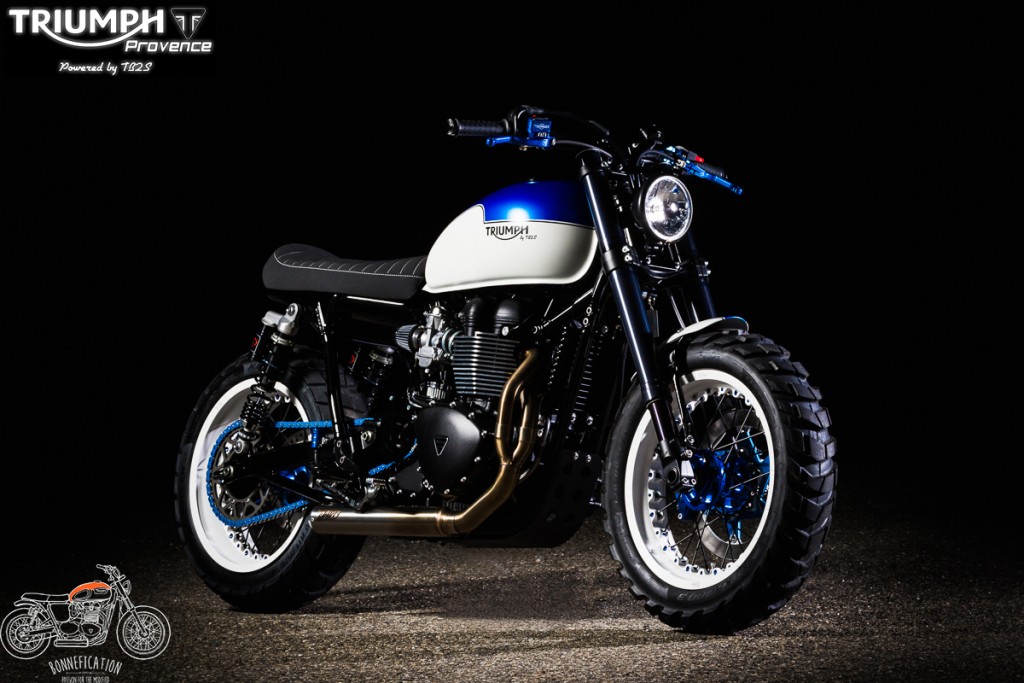 This Scramblerised Bonne is named after a surf term meaning ‘a late breaking wave’ and was built to get to places that no VW camper van was meant to go and with an idea of getting there first, though without a surf rack I’m not sure what the rider is going to do when he gets there – perhaps the rider is no surfer but a cool retro loving surf photographer who wants just such a bike to get the ‘tir parfait‘ 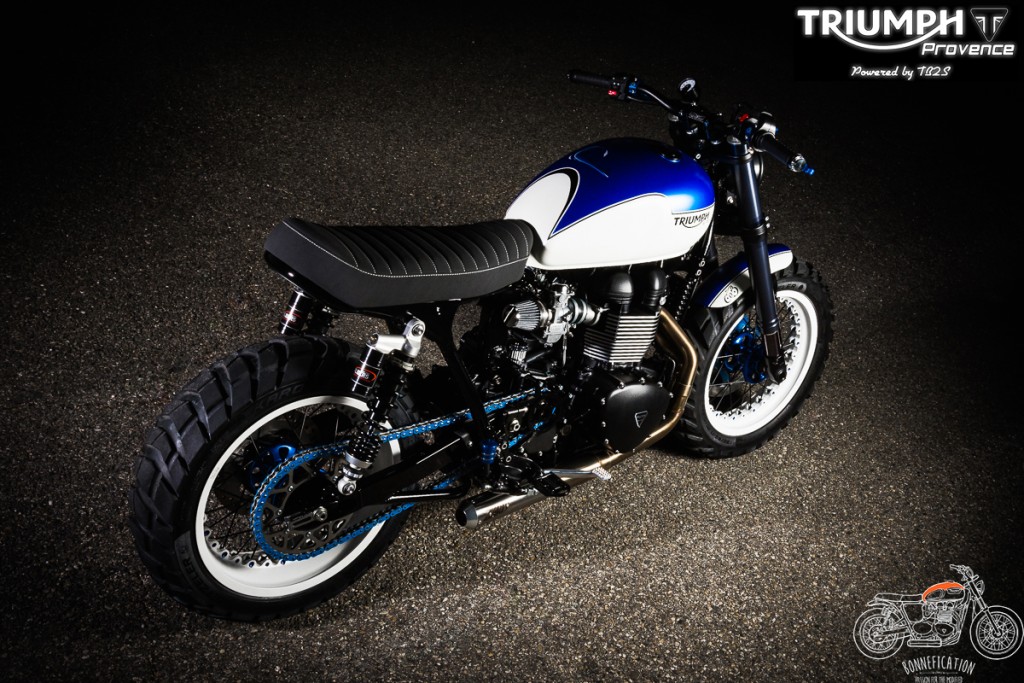 What the monsieur’s at Triumph Provence say is that they wanted to build a bike which ‘evoked the libertée of conduct “Dirt” … a bike that shares its playground with Surfers” – They did this by cutting and looping the frame and removing the air/battery box, but rather than fitting a mudguard they fabricated an eliminator, which like the frame has been finished in high gloss black powder coat. The result hides all the relocated wiring and battery achieving the much cooler see through frame look. 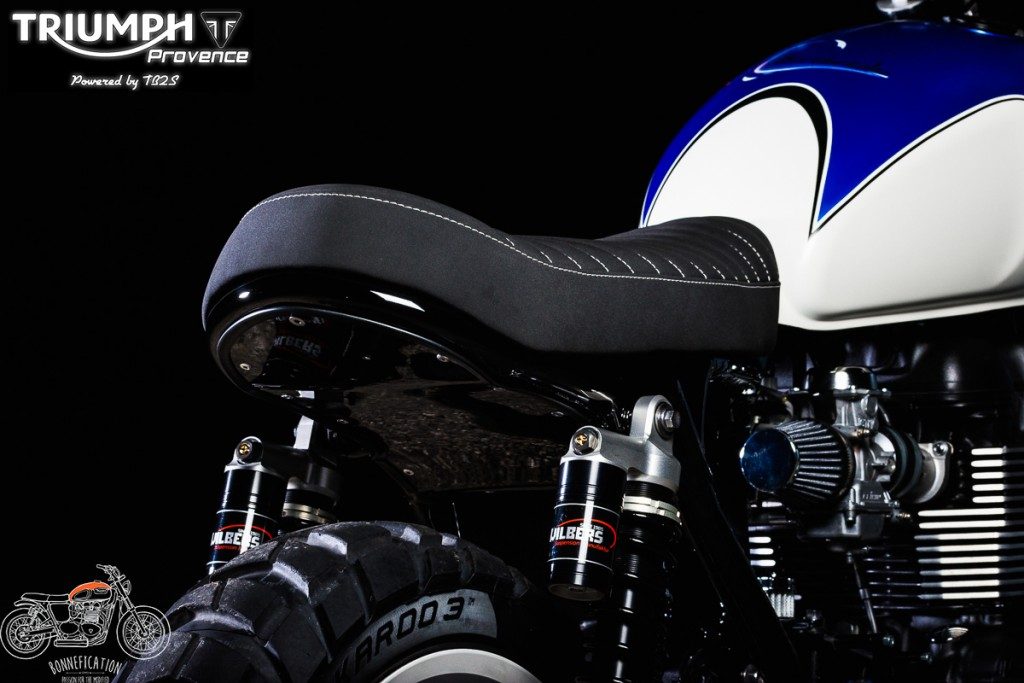 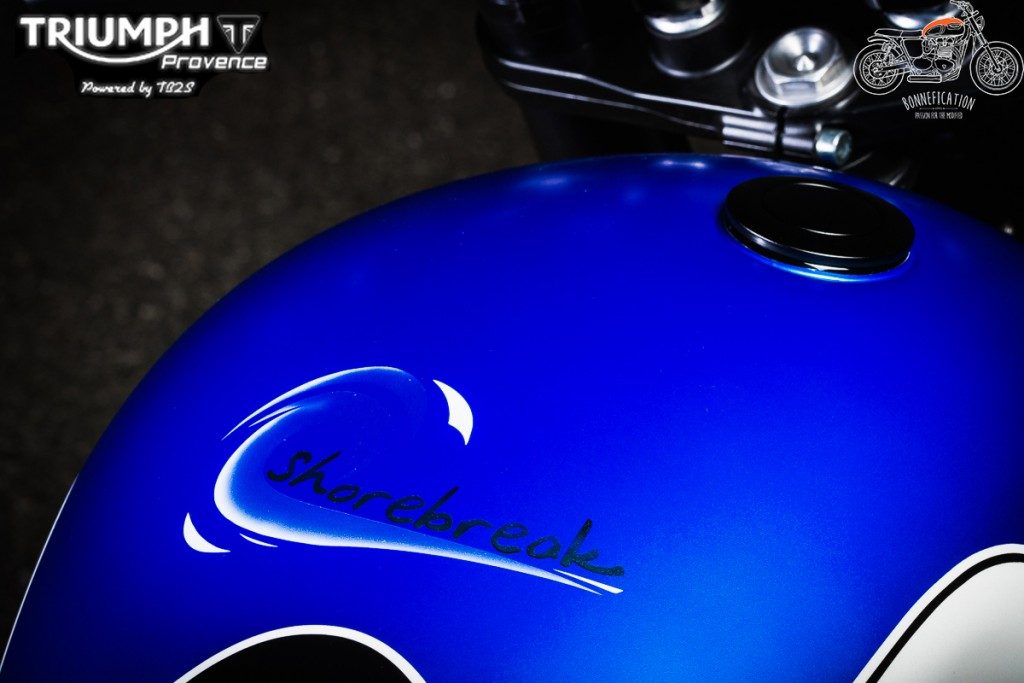 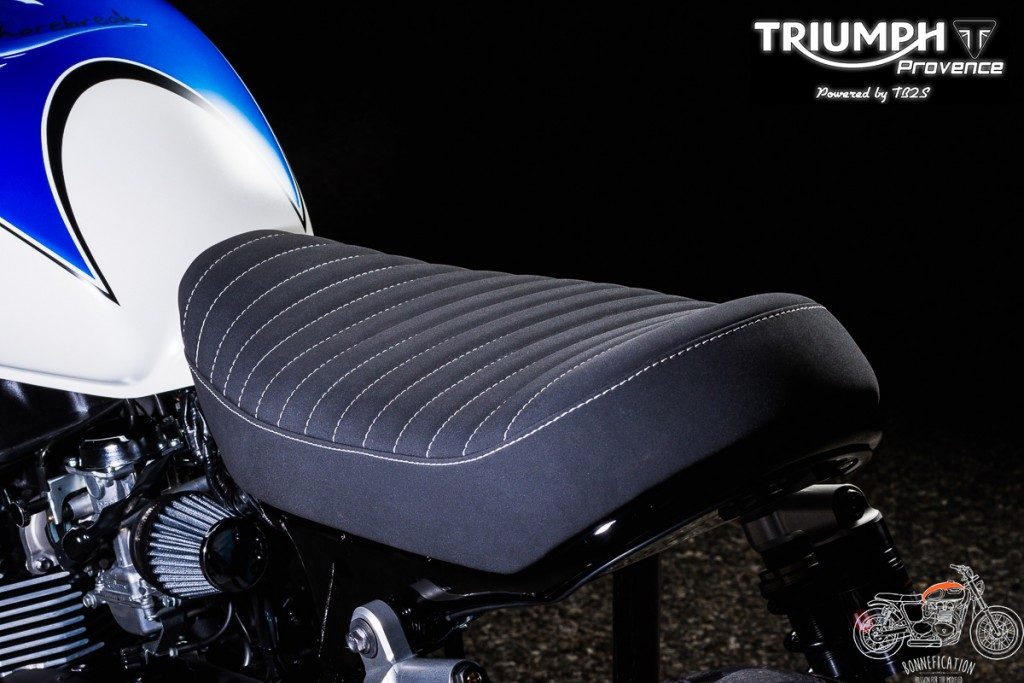 This area has been topped off with conical air filters paired with the Zard 2>1 Cross Low exhausts and a custom seat with white stitching – a seat which goes very nicely with the tanks tricolour, black, blue and white paintwork with wave detailing and the bikes given name of ‘Shorebreak‘ which was painted by Color of Bike. 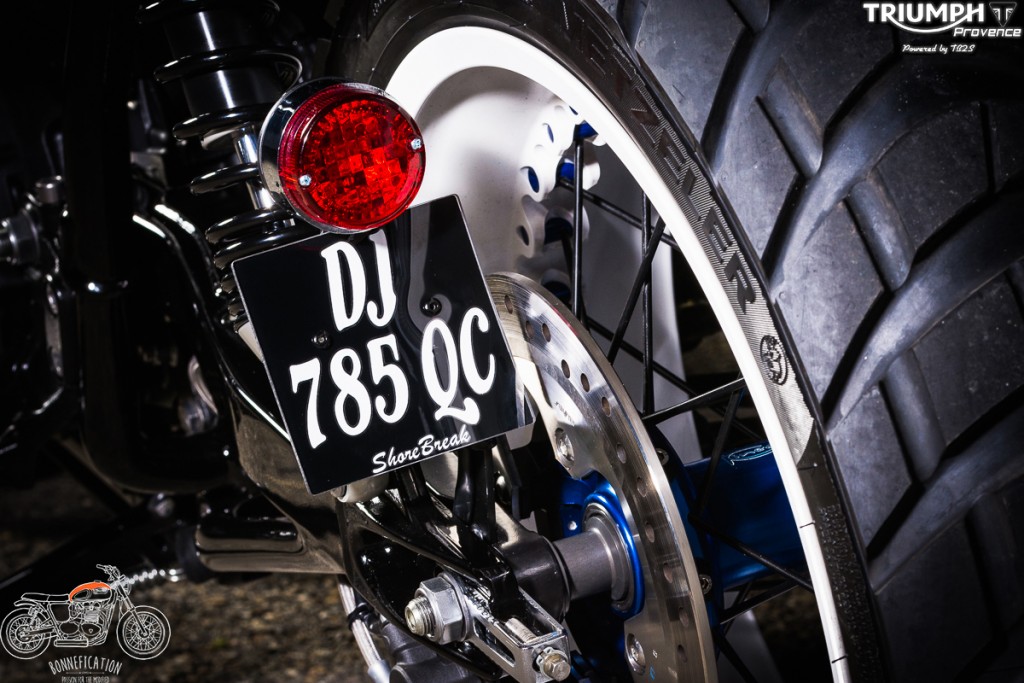 With the removal of the rear mudguard the rear light and license plate have been relocated to the left hand side of the swing arm by the bottom shock mount, with the front light being changed for a 4.5″ Bates style bottom mounted unit. 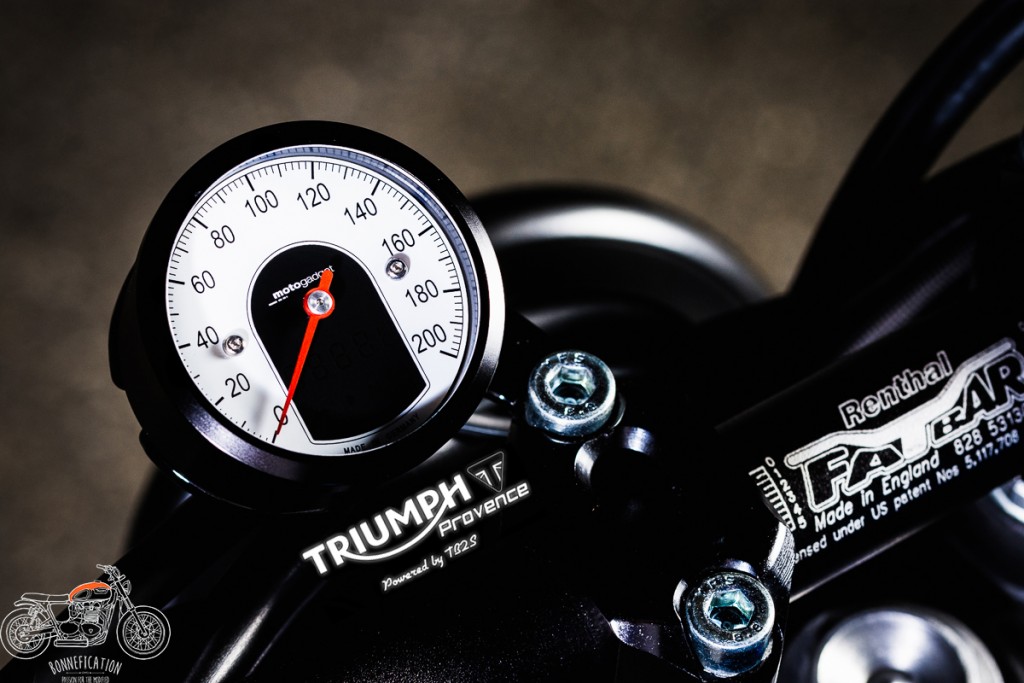 This leads us up to the Rental Fat Bars which have been fitted with OEM stock switches and grips and Motogadget bar end turn signals. As ever the bloated stock gauges are gone being replaced with the compact Motogadget Tiny speedo fitted to this CAN bus model twin (years 2011 and on) using the m-Tri signal adapter. 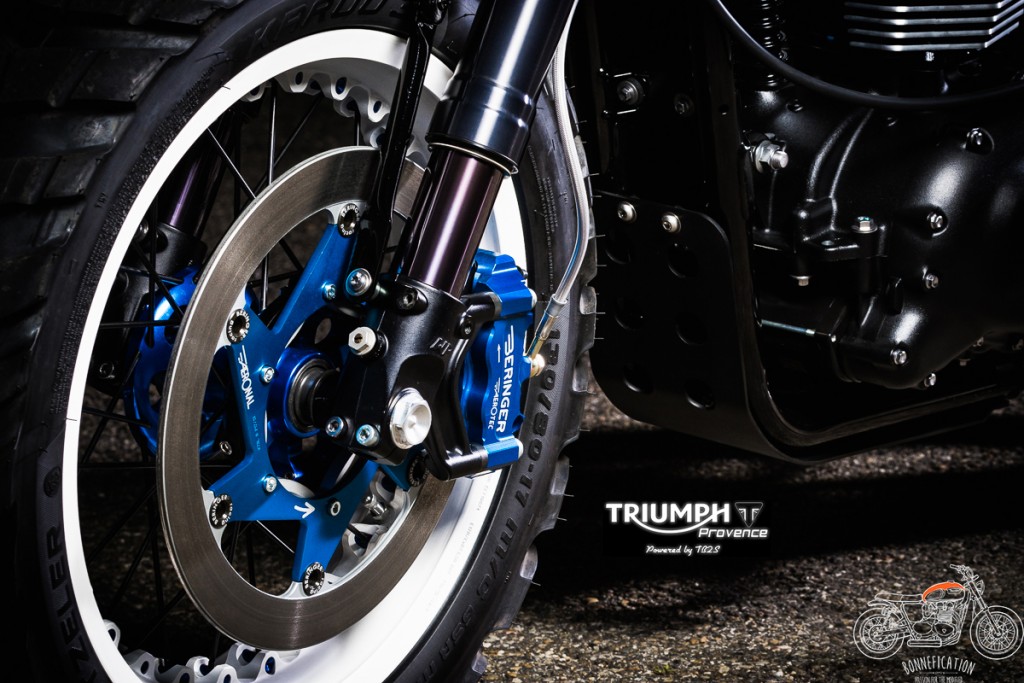 Other upgrades are considerable and of course functional with the forks being swopped for USD from WP Performance Systems with the rear being replaced with shocks by Wilbers. Now thats some serious suspension upgrade, but unlike the gold Ohlins the black WP USD’s don’t look over the top. 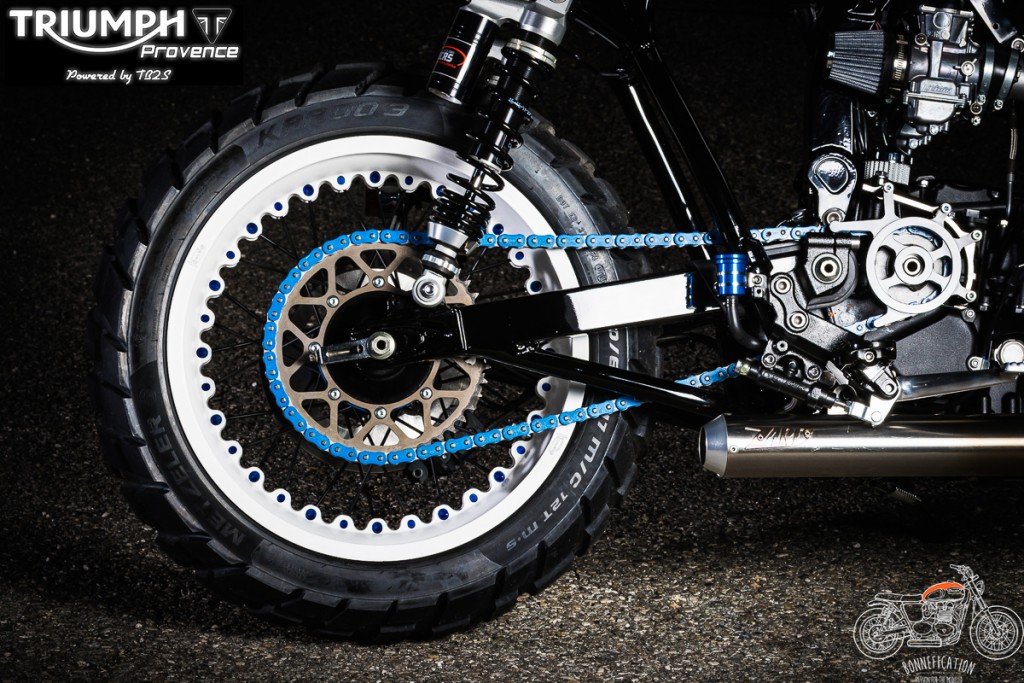 The rather striking white Kineo wheels are both 17″ an have been fitted with the Metzeler Karoo 3 130/80/17 tire both front and rear, giving Shorebreak the Fat look, which I believe is good on sand.(correct me if I’m wrong) The finishing touches include the dumping of the stock front brake for a blue anodised Beringer 6 pot Aerotec brake system reservoir and levers. Other visible details includes an LSL sprocket cover, not idea about the chain or sprocket. 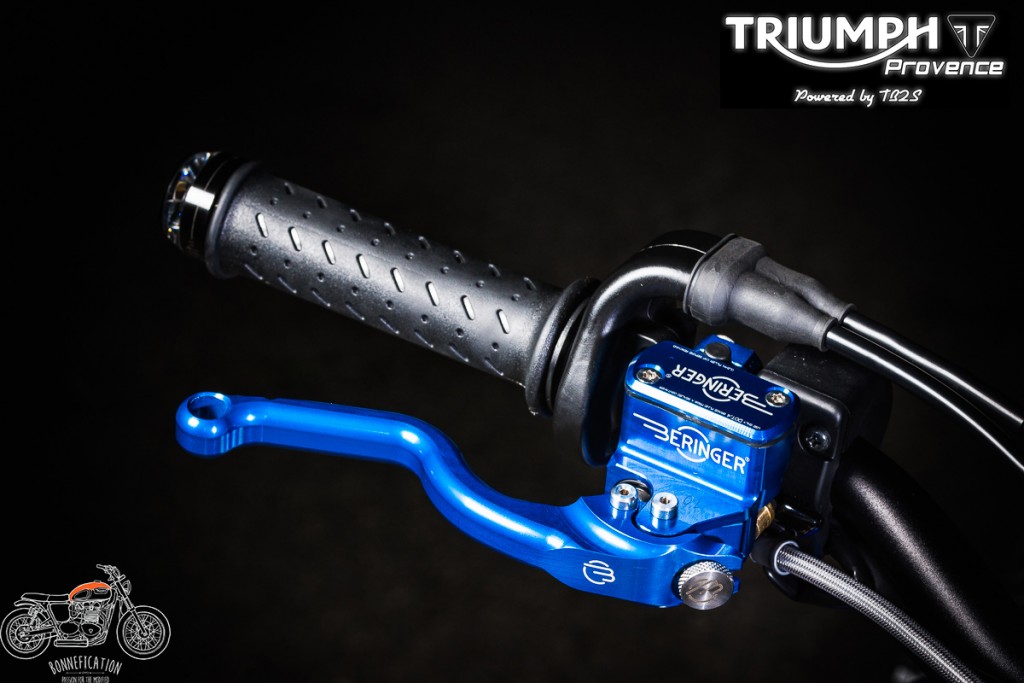