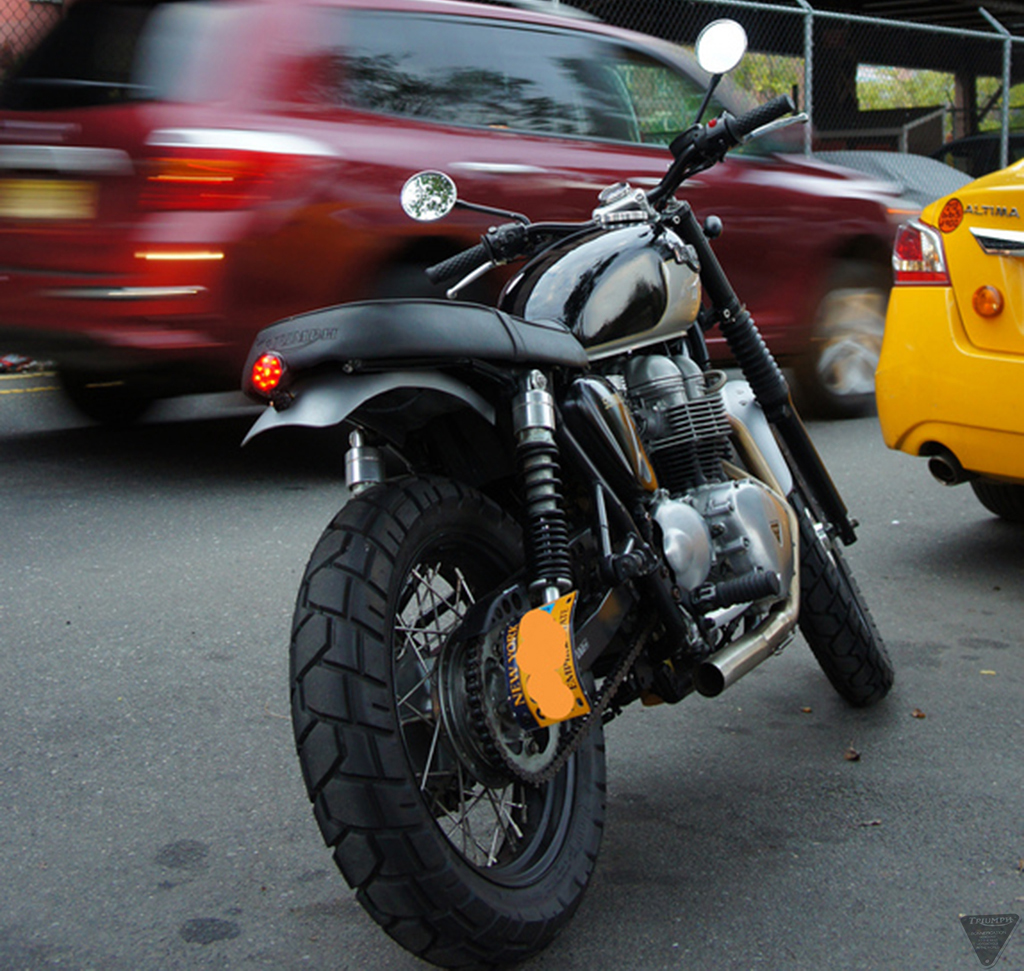 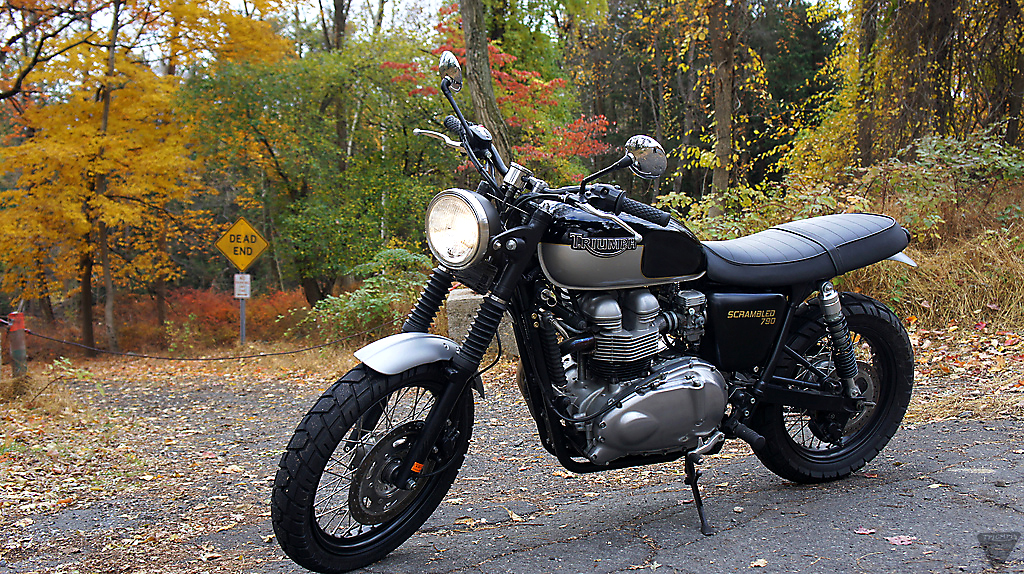 Bonnefication’s background is in the home grown, shed built machines that we can build ourselves. The professionally built machines are great if you have the money and lack the time or experience to build one yourself. To the rest of us the pro-builds are perfect for that much needed inspiration, a guiding light as it were. But there is nothing better than building a bike yourself. (In my case nearly three years.) Often these home grown bikes take shape in the aforementioned shed or garage or in this case an Upper East Side New York apartment backyard. 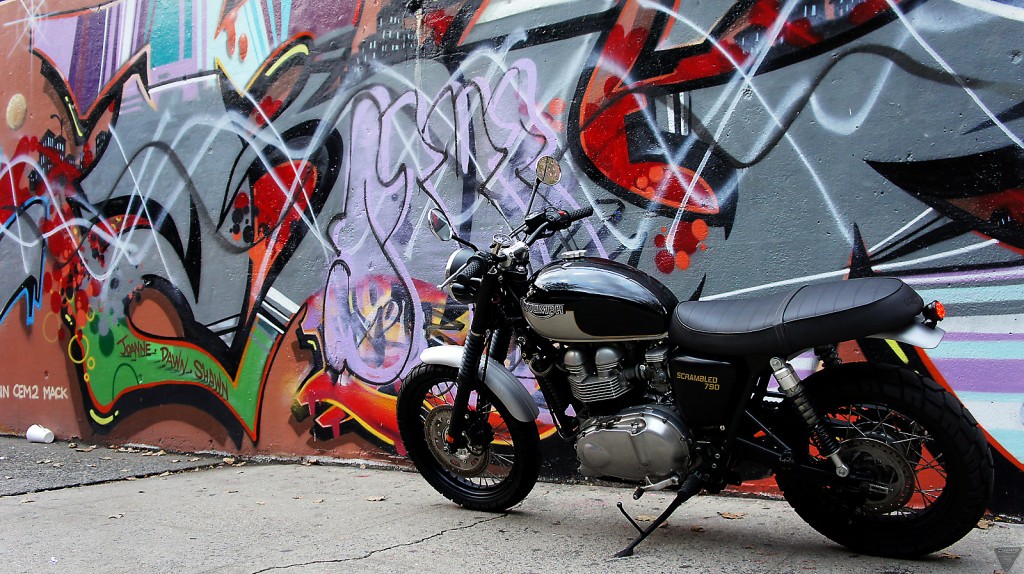 32 year old New York Attorney Jason Hodrinsky is no stranger to wielding the spanner (wrench) having owned a Honda CB550 which saw its fair share of modifications. There was also the 2002 Suzuki SV650 which needed a bit of work after an incident with a Cab. Jason also likes his cars and has spent many hours working on his 1969 Mustang. 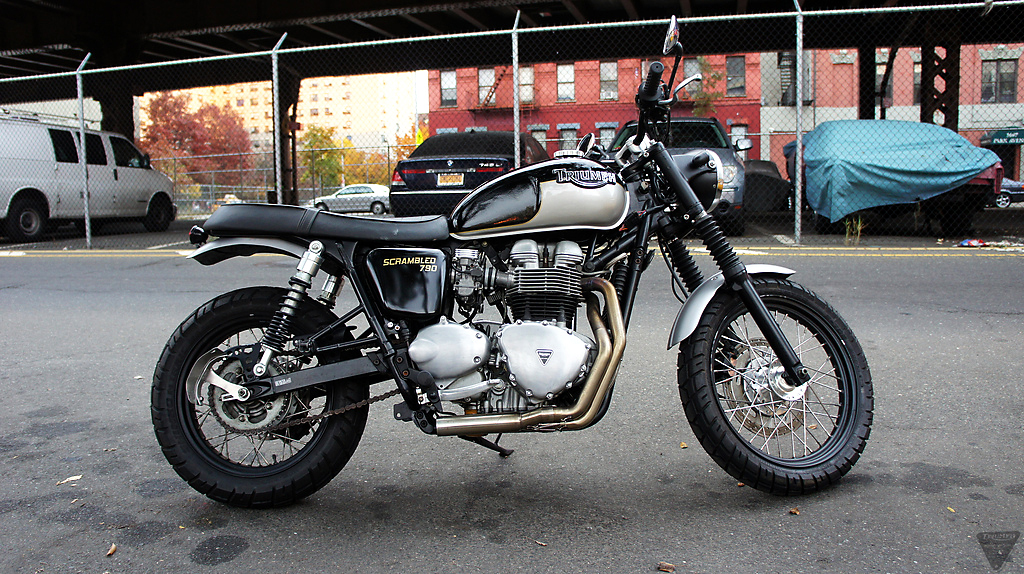 This particular bike is the third to be wheeled through the apartment and out to the backyard, much to the amusement of Jason then girlfriend. The first being the Suzuki which once repaired was lent to a buddy for a photo-shoot, this was spotted by a passer-by who offered to buy it. 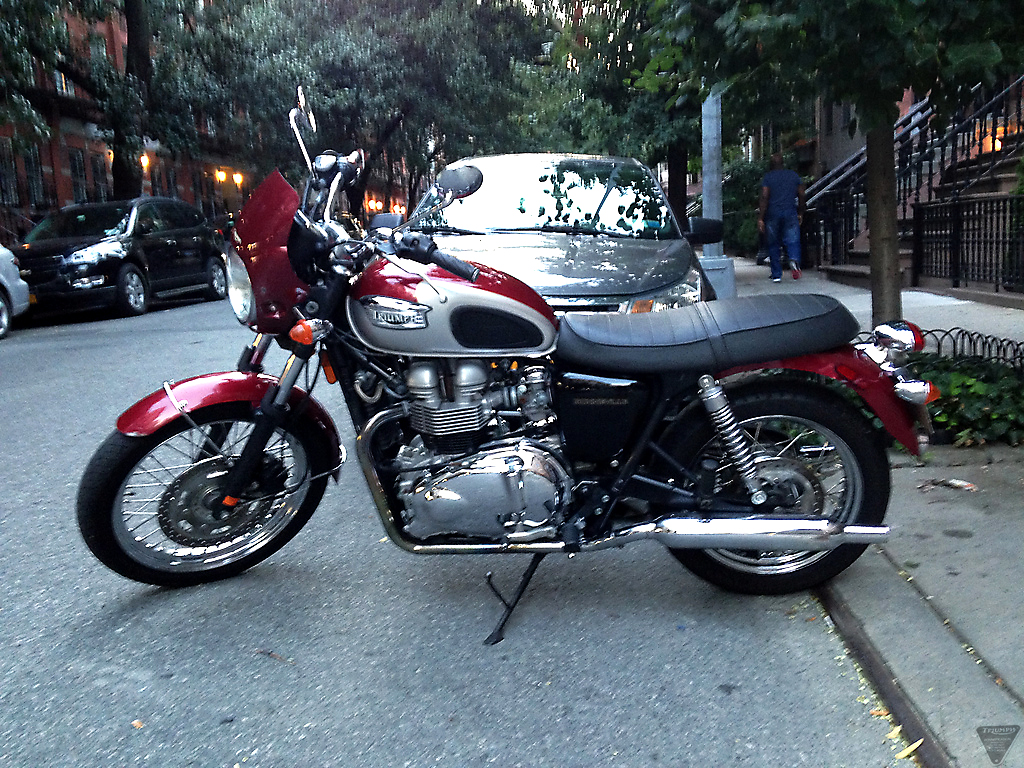 The second was a 2004 Bonneville Black which Jason bought with the proceeds of the sale of the Suzuki, this was later sold to make the ‘girlfriend‘ the ‘fiancé‘. A wise move indeed when a chap plans to keep wheeling bikes through their apartment. 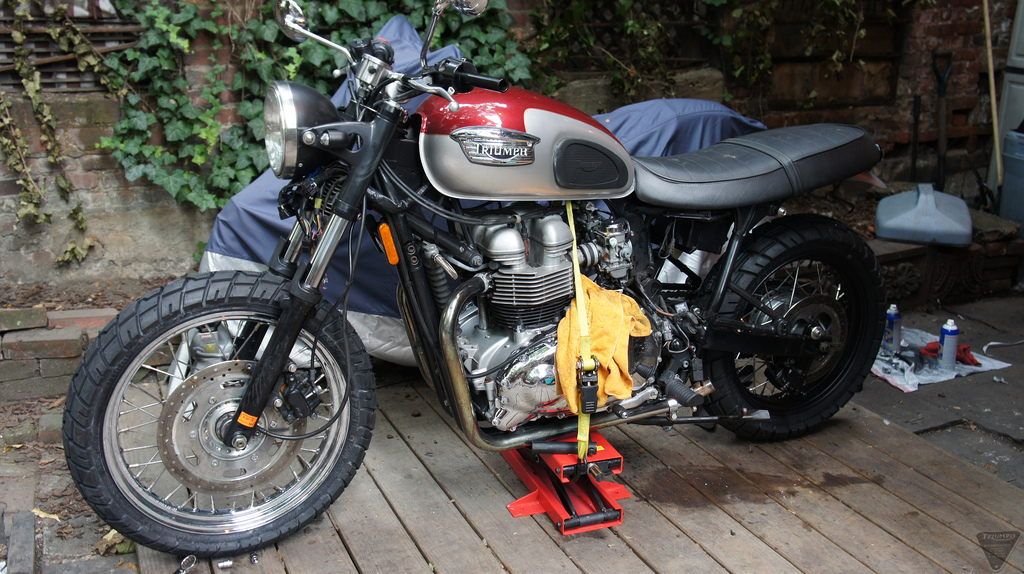 Still needing a creative outlet to help unwind from the day job (know how you feel) Jason started looking for new project on Craigslist. A 2001 Bonneville was found for sale at New Hampshire Harley Dealer for an ‘unbelievable price‘. Jason knew he just had to have it. The bike had been previously owned by a mechanic at Acme Choppers in Laconia so was in pretty good shape. 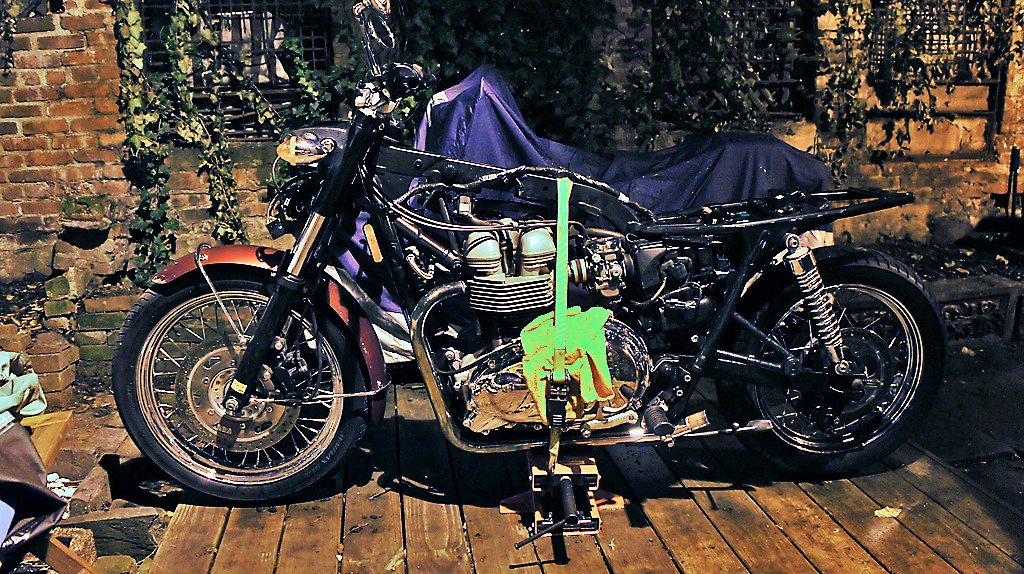 On the eight hour journey to collect the bike, Jason thought about nothing else other that what he was going to to with his new acquisition, ok he might of thought about his fiancé a little to, but just a little. Getting the bike home after the five hour return ride, it too made its was through the apparent and out to the backyard. 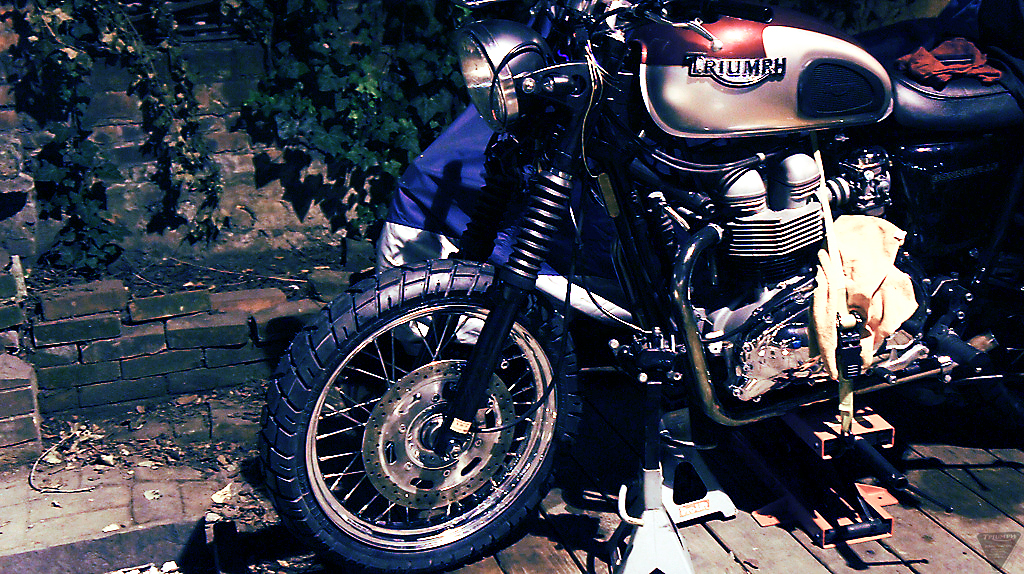 As you can imagine a backyard is not really the best place to do a full build, as Jason explains… ‘Frame mods and serious engine work were out of the question, so I did what I could to create a unique bike on a tiny budget’ Ive experienced this first hand, I did more to my own bike when I had garage that the time before or since, proving just how essential a nice workshop can be when undertaking any major work. 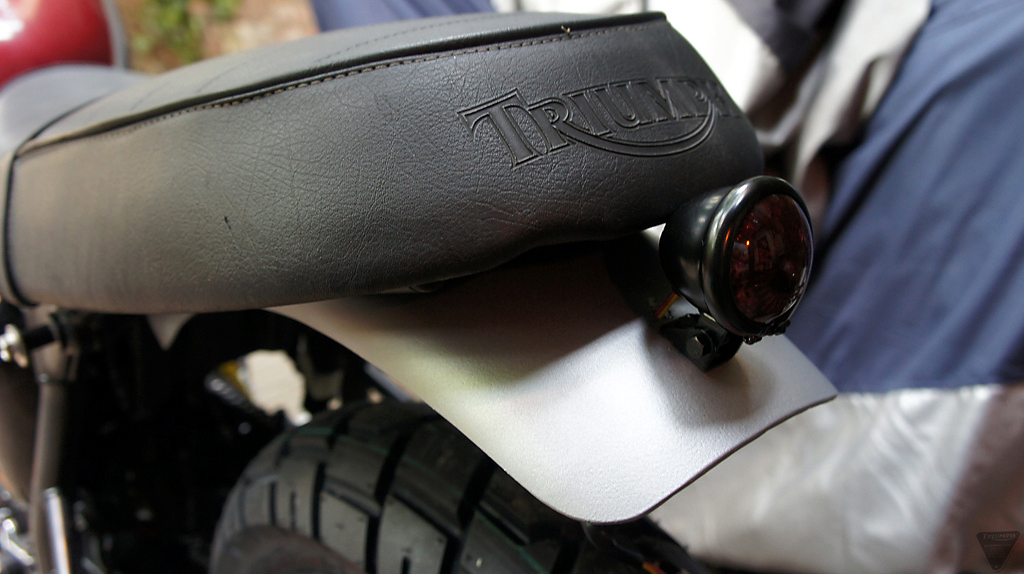 For most the build went smoothly, but painting for example is a nightmare in the open and Jason, as you can imagine had the inevitable weather and debri related setbacks ‘the end result is satisfactory. I see plenty of flaws, but get compliments on it whenever I ride’  Jason has only covered 800 miles since completing the build due to the weather. But when the summer finally arrives this Urban Scrambler will be seen tearing up the Palisades Parkway to Bear Mountain Park. 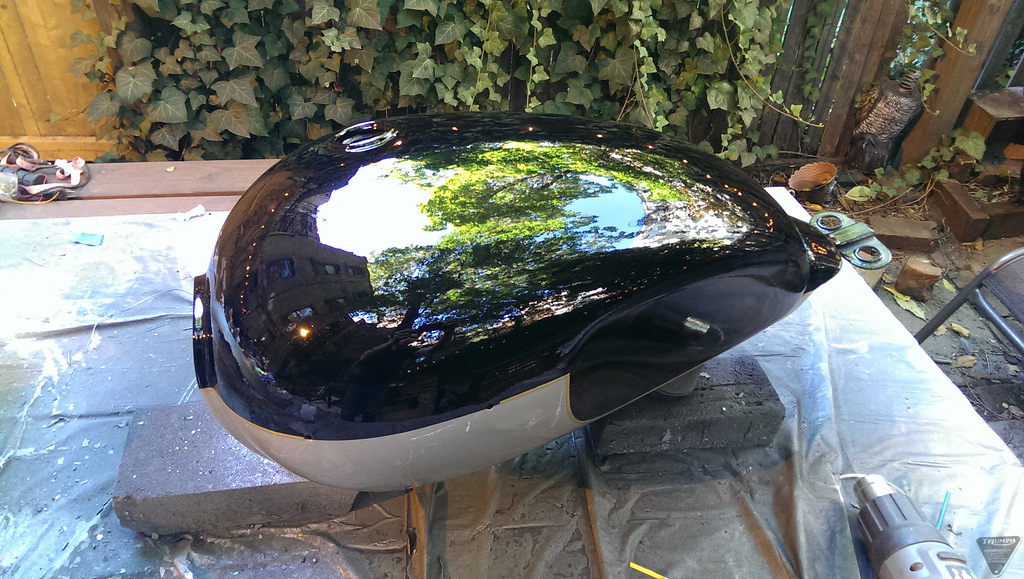 The total budget came in at just under $4,000 USD including the purchase price of the bike.

Have a project and want to share it? then email us a Bonnefication, just click the link