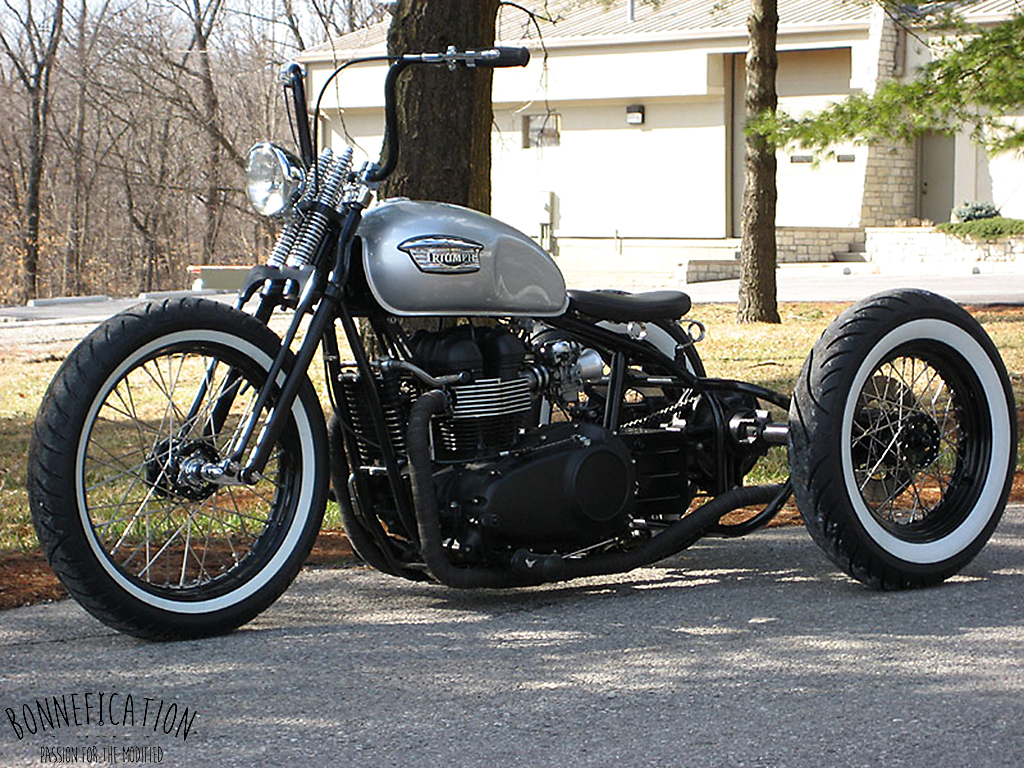 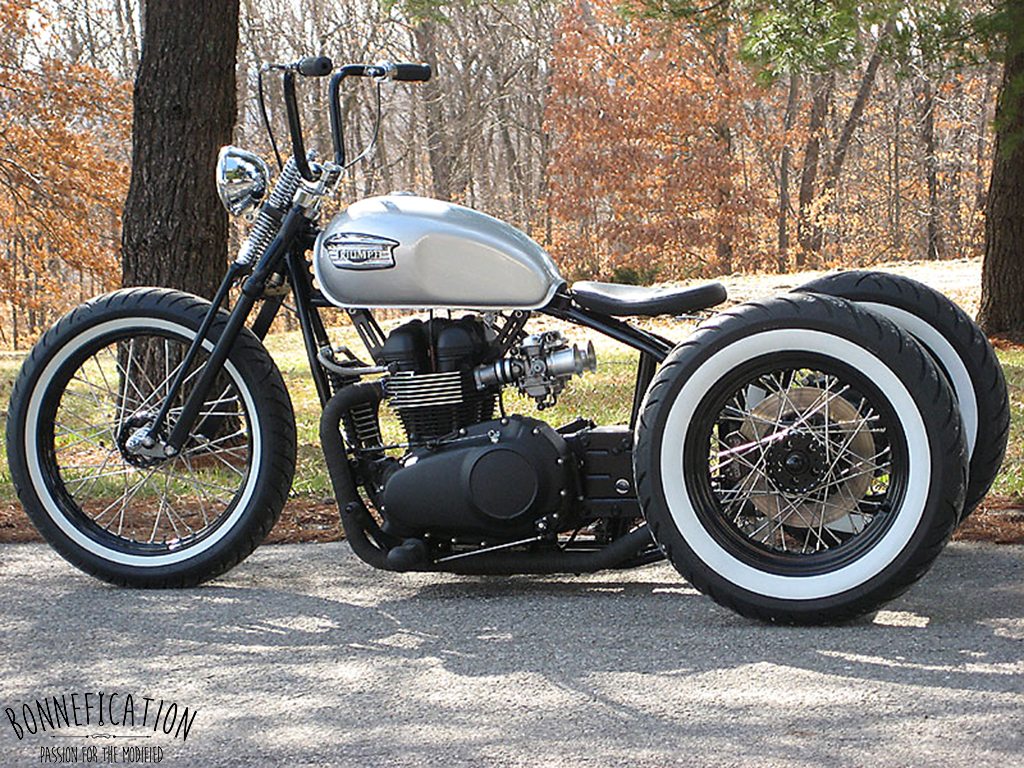 Im not a fan of Trikes, they are often made from half a crashed damaged VW Beatle or a Porsche 911, and look like the aforementioned vehicle is trying to dry hump chopper from behind. Trikes based on Hinckley Twins are pretty rare, which I though was probably a good thing. Until that is I found this sweet little custom Triumph, which uses the engine from an 06 Bonneville Black, and was built by Norm Wilding of Mid Missouri Motorcycles Customs, 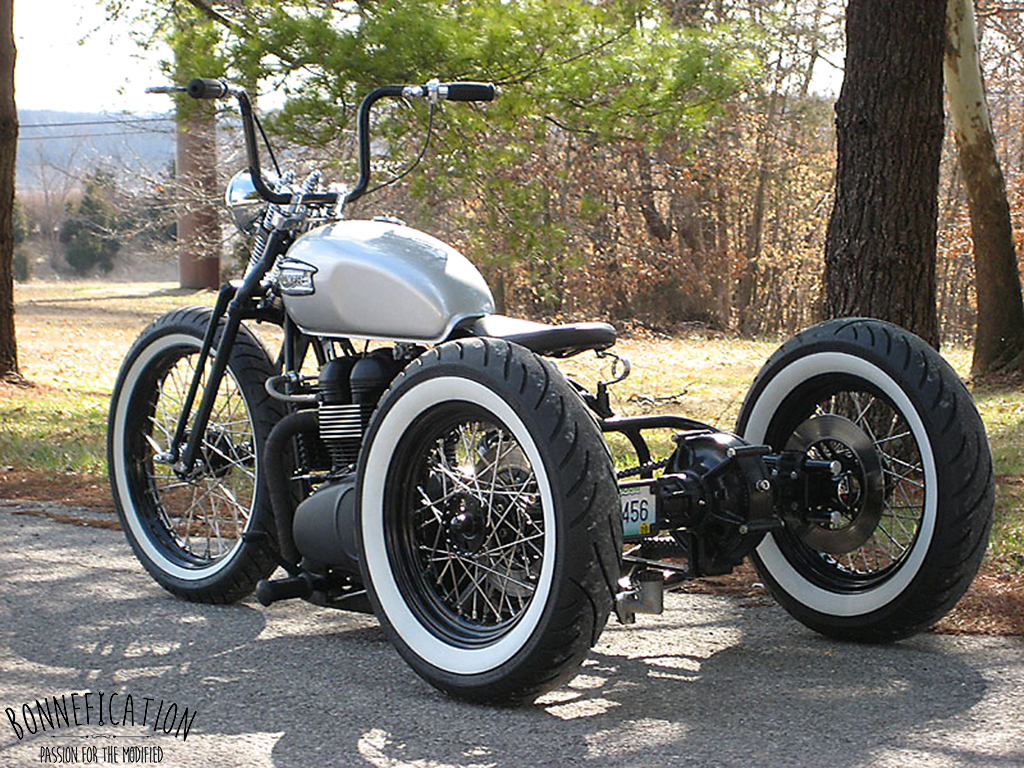 I think this Trike is a great looking motorcycles, the sort of build that Bonnefication is all about. Some might say it look like a kids bike, but I feel that is its charm, this trike is virtually an engine (Triumph of course) and three wheels, what is more honest than that!

I know trikes are not everyone’s “cup of tea”, but I get a lot of guy’s (and girl’s) back in the wind, instead of sitting indoors in a wheelchair.
– Norm Wilding 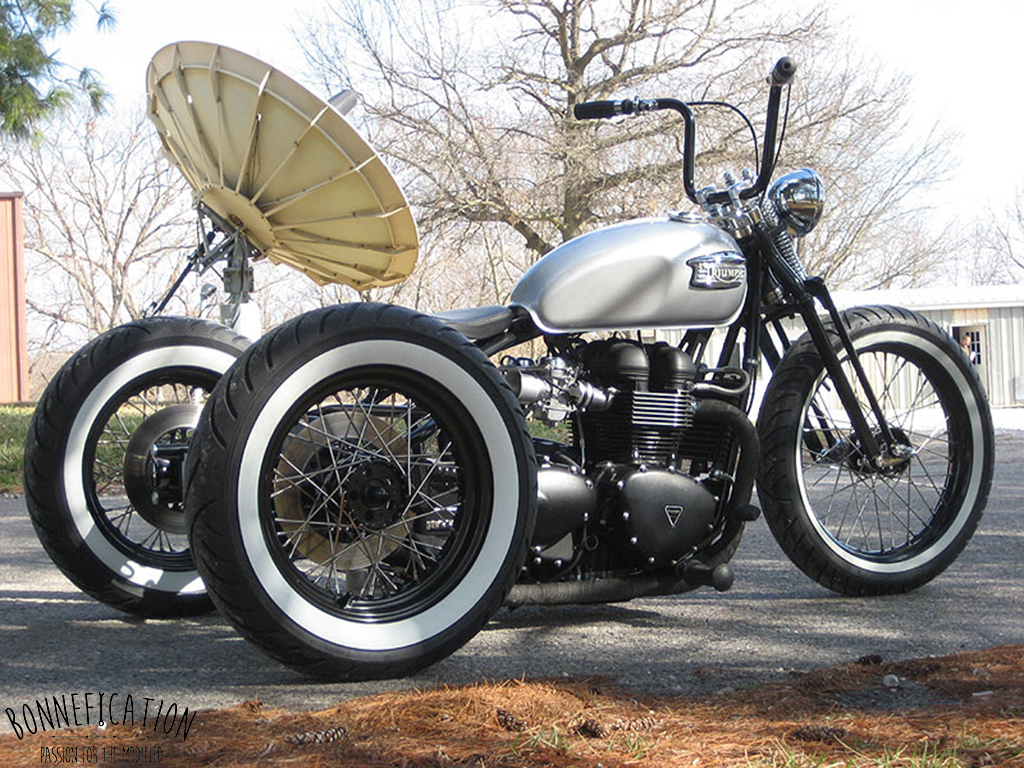 Mid Missouri Motorcycles Customs, is owned and operated by Norm Wilding, who grew up just outside London England, and learnt his wrenching skills on Triumph, Norton, BSA, Matchless and AJS etc.. 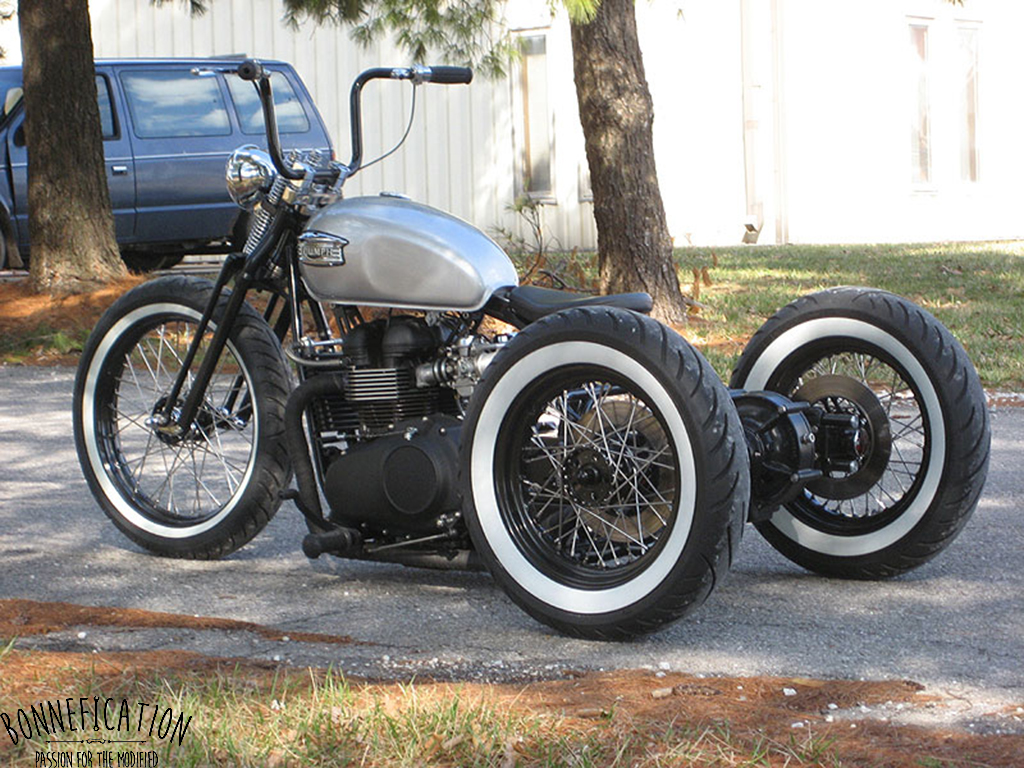 From a very early age he was building “Hot Rid” motorcycles, taking Triumph engines and making them fit into the Norton featherbed frames, and building what is today known as the original “Cafe Racer”.

In 1979 Norm built a Harley Davidson 45 trike that took Best Engineering, Best Trike, and Best of Show at “The Kent Bike Show”, which was then (and still is) the most prestigious custom motorcycle show in Europe. 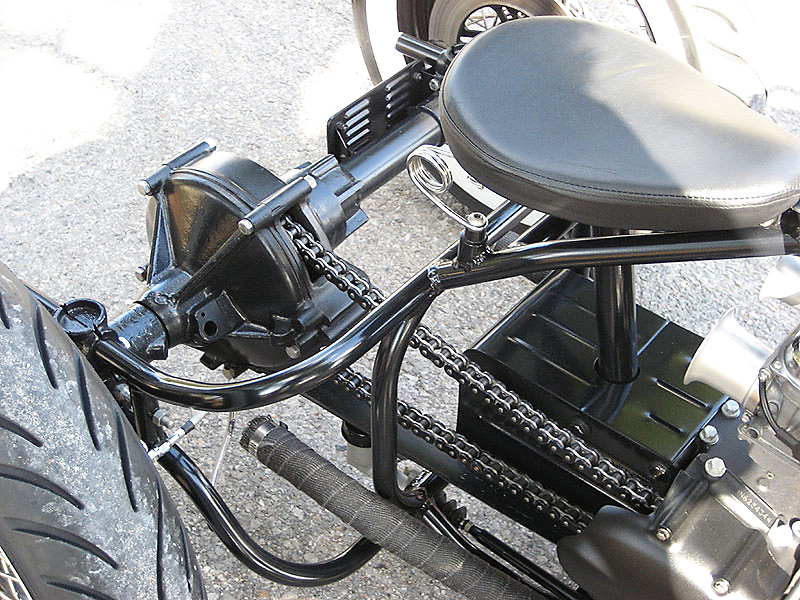 “I Started with a used Paughco frame that was originally intended for a Harley Sportster, removed the steering head, and refitted it at 28 degrees rake”. 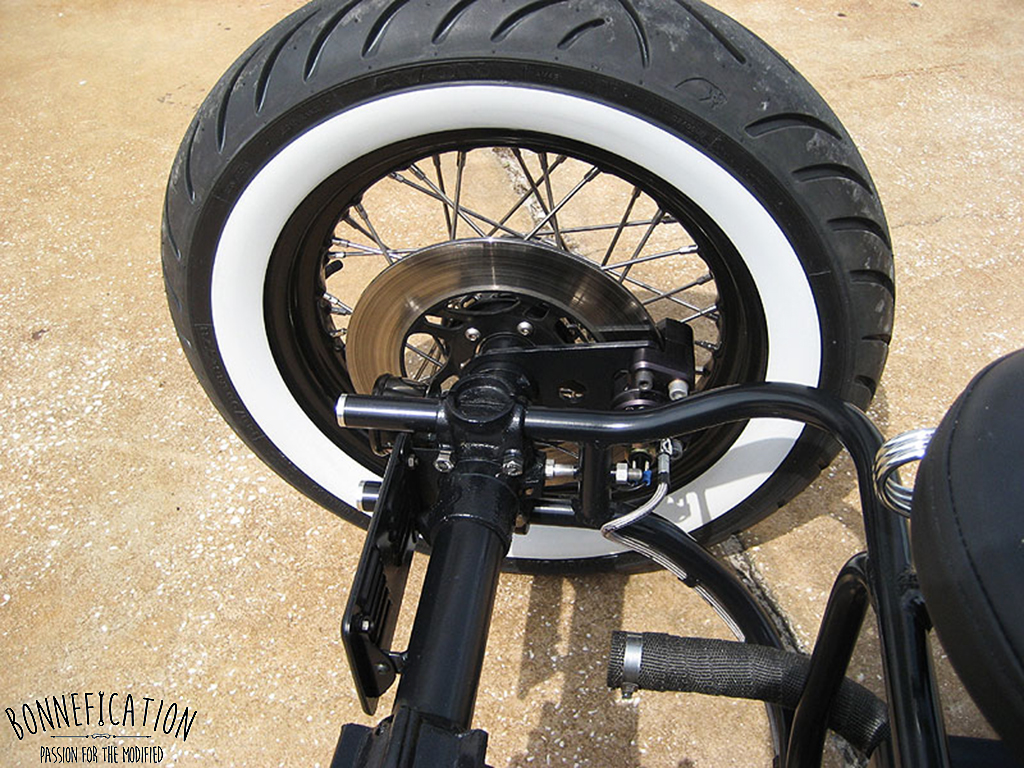 “I took some DNA springer forks, and shortened them 2.5″. Modified the frame with 1″ x .134″ DOM tubing to accept the 1933 Harley sevicar rear axle (which I shortened 2″ each side), and made a disc brake set up using 1984 Gold Wing brake rotors and Wilwood calipers on custom fabricated brackets.” 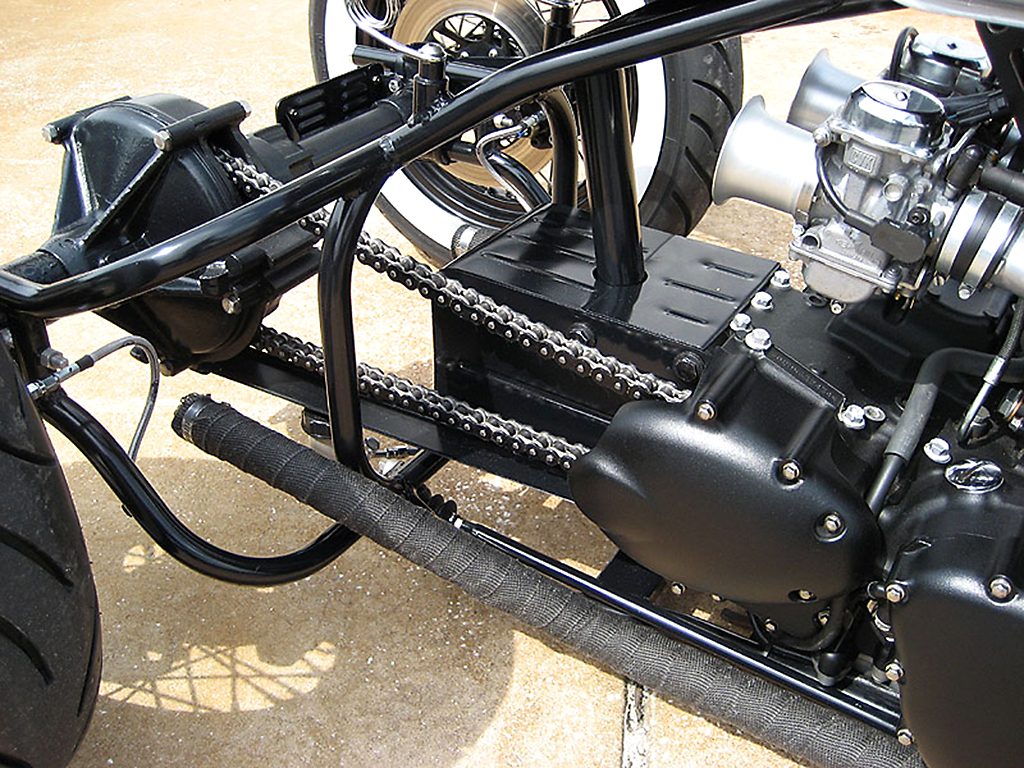 “The motor is a 2006 800cc Bonneville “black” unit. Pretty much stock, except for the velocity stacks and a jet kit. Overall, one of my favourite builds, a lot of fun to ride, and gets a lot of attention”.