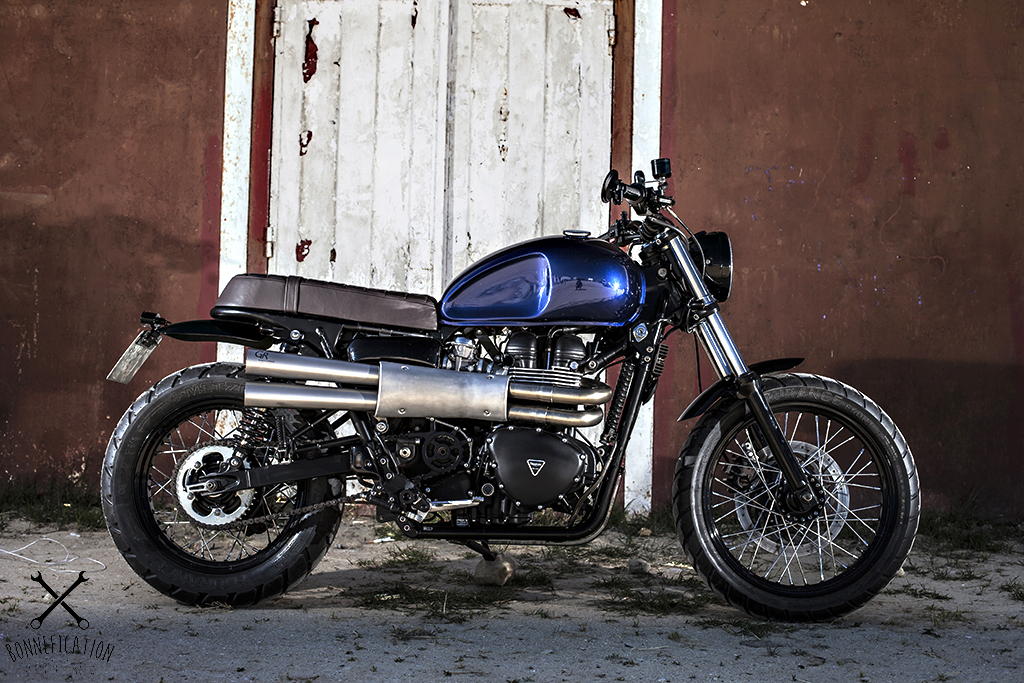 Many of Bonnefication’s regular readers will be more than aware of Macco Motors the Málaga Spain based motorcycle builders who have become synonymous with customising the Hinckley Triumph Twin. There are plenty of bike builders in the world who have taken their skills and experience and focused them on the modern Triumph, but few with such continued success as Jose and Tito of Macco. . 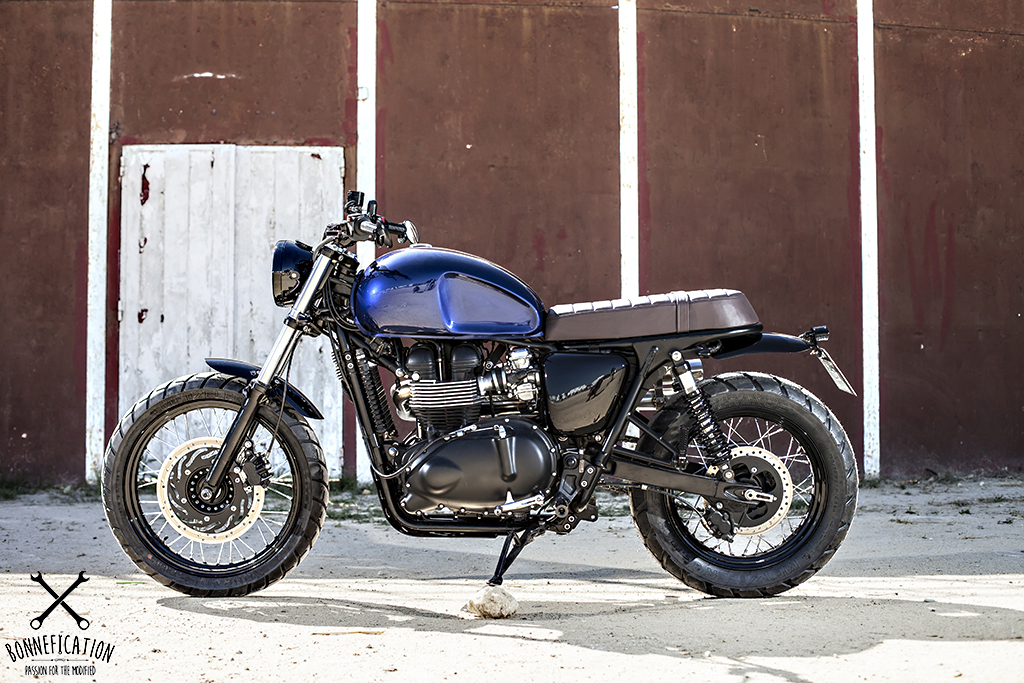 In part this down to using to a template… a blueprint as it were, a blueprint which in-turn has become a trademark, with Macco Motors paint schemes, seats and side covers becoming instantly recognisable. But many well known trademarks have changed, some changes been very subtly, others not so – often to the man on the street these changes come out of the blue – in the case of Macco Motors latest Triumph Twin ‘The Climber’ a build based on a clients 2013 Scrambler, its more … out of the black and into the blue. 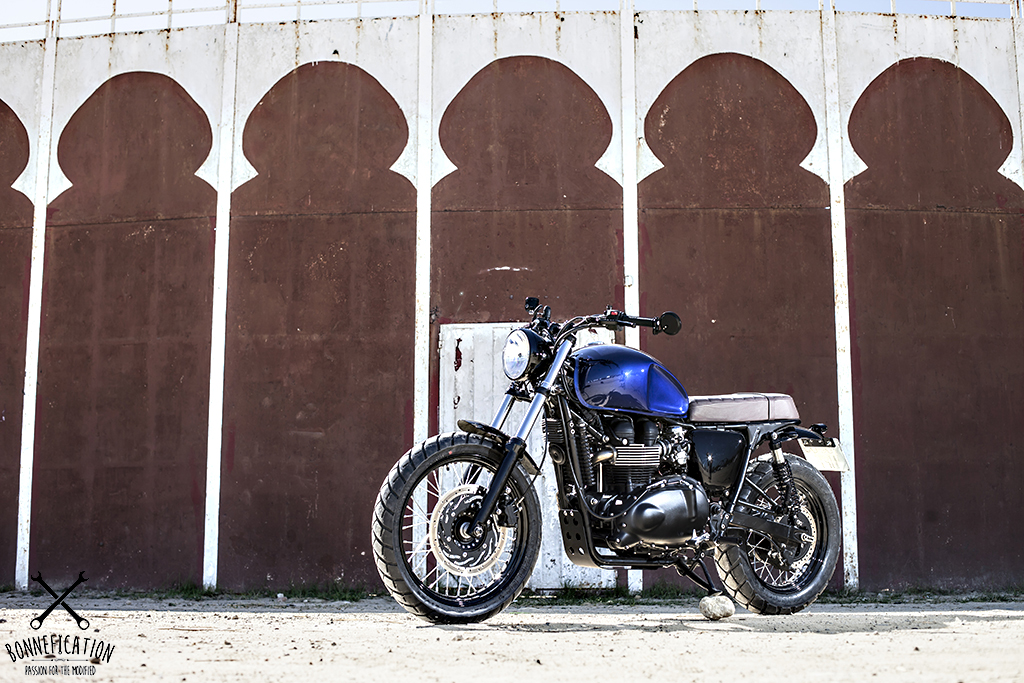 Gone is Macco’s trademark thin sculptured Brat Style seats and in its place is a more comfortable appearing fat seat –  a style of seat which takes it’s influences from the Bates ‘Scrambles’ seat, which was a must have accessory for the desert racers of the 1960’s. 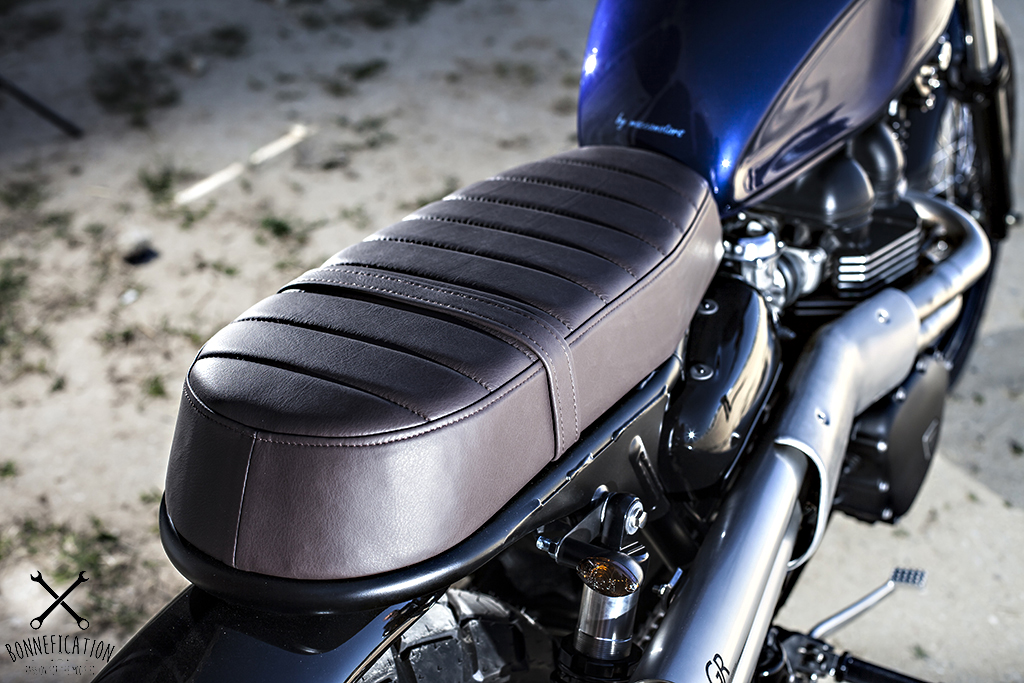 The seat which has been finished in brown leather and paired with a frame loop which too is a step away from Macco’s usual upswept loop. The back end has then been finished off with Macco Motors own fibreglass mudguard, a retro tail light and shock mounted mini indicators. 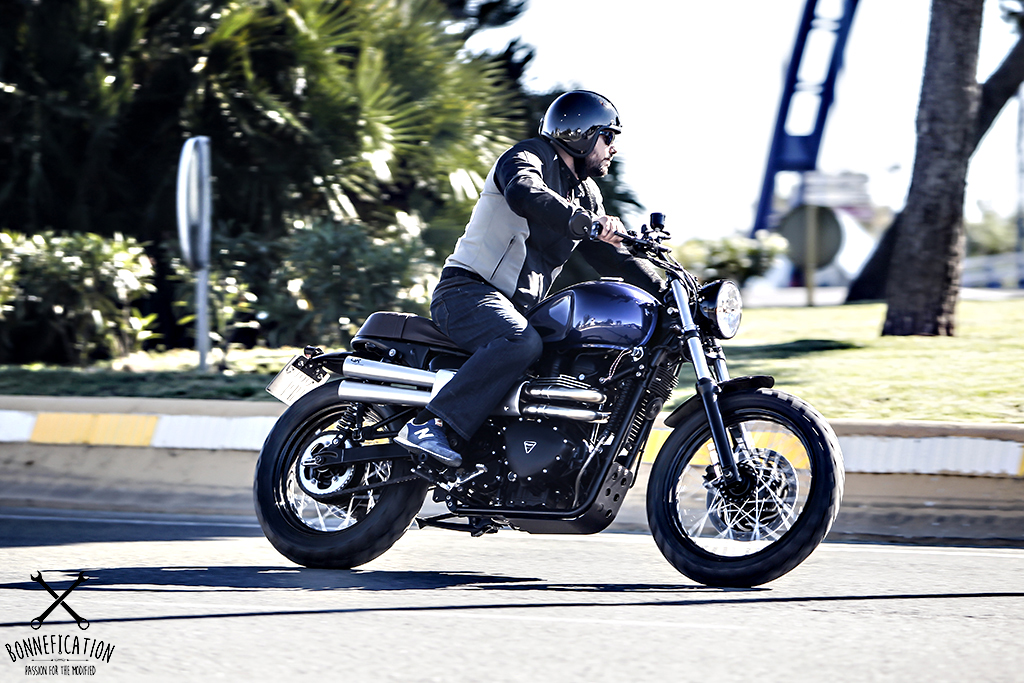 The bloated and usually unatractive EFI fuel Tank is now something to behold, not only has it some serious reworking of the scolloped side panels making them even more pronounced, but the tank has then been finished off in a very nice glossy dark blue, which looks fabulouse against all that black. 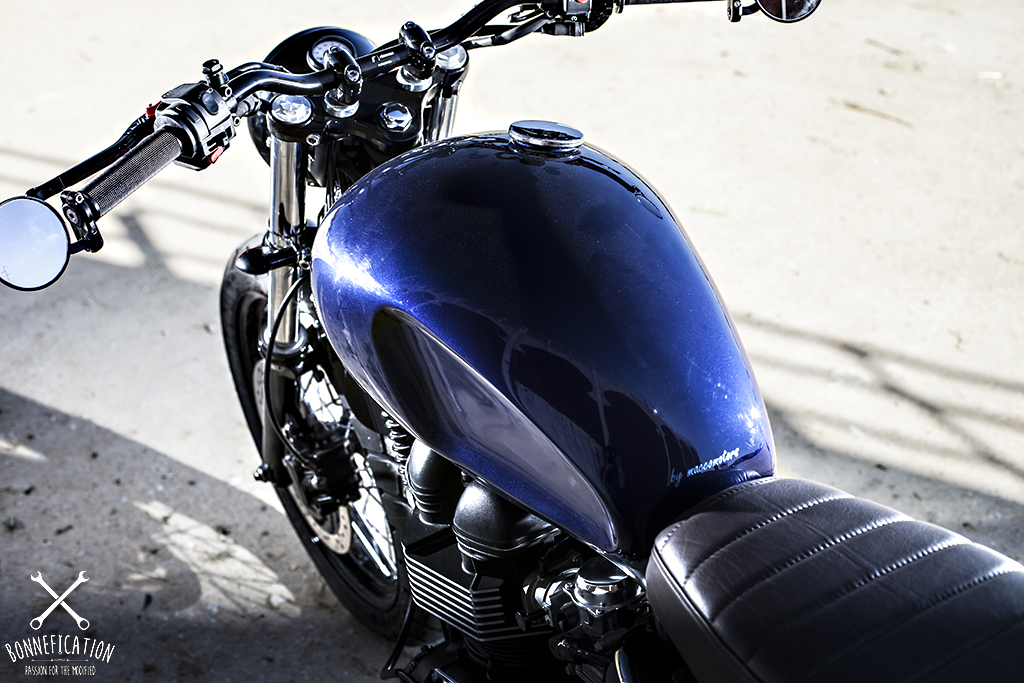 The ‘The Climber’ has also had plenty of upgrades including the replacement of the OEM 5″ headlight which has been upgraded to a 7″ unit with near invisible mounting. This in turn has been fitted with the super cool Motogadget Tiny speedo which has been mounted into the headlight bowl along with the programable options button which gives this Scrambler a stripped down profile.

This was made possible on 2013 CanBus models Scrambler by the Motogadget M-tri adapter. Previous Macco Motors builds have featured low exhaust, but on a Scrambler LOW IS A NO GO! – I’m sorry but its a fact, if you want low pipes then you really have chosen the wrong Triumph Twin. Like their Foxy Lady build, Jose and Tito turned to Roberto go GR Exhaust who again fabricated Macco Motors a  bespoke 2>2 shotgun exhaust which features an impressive heat shield to prevent the rider from getting burnt.

With all the cosmetic work carried out on the Scrambler all that remained was to improve the handling – the stock shocks went to their rightful home (the skip) and have been replaced with Hagon progressive springs at the front and Hagon Nitro’s at the back. 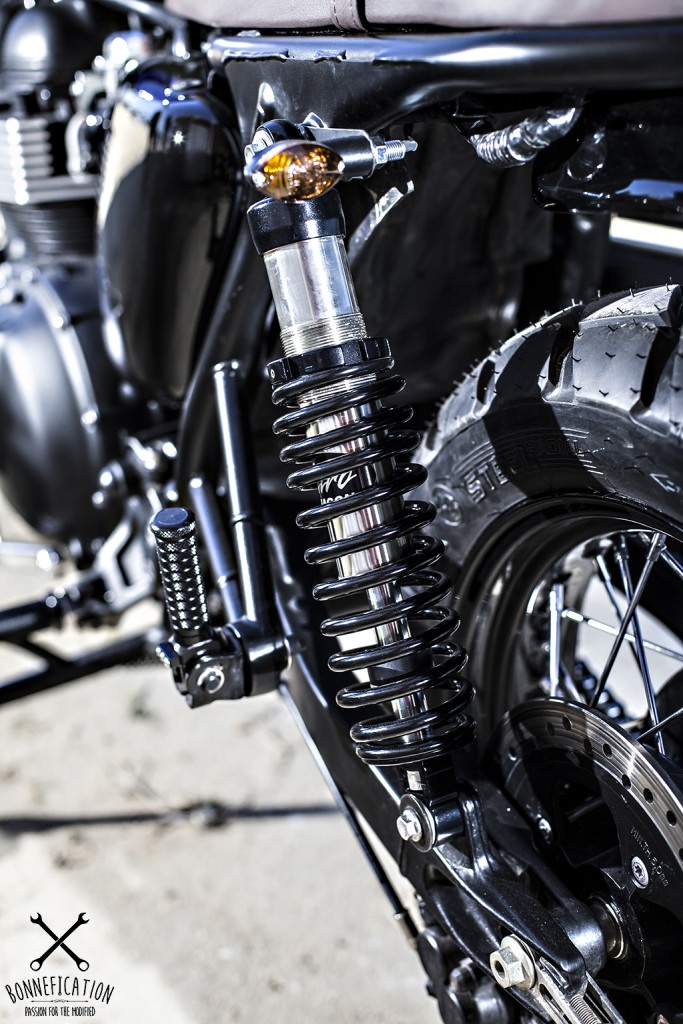 The Bridgestone Trailwing which were fitted to the Scrambler from the factory have also gone, being replaced with the popular Metzeler Tourance dual sport tires, with the Bridgestone probably finding their rightful home on the side of a tug boat.

There are plenty of details on Macco Motors ‘The Climber’ that I don’t need to go into as they are pretty obvious to the seasoned modifier, but if they are not, many are listed below. Overall, this is another really nice build from Jose and Tito at Macco Motors – a build which is perhaps similar to a MrMartini Scrambler, but then I could say ‘The Climber’ resembles my own Desert Sled build. But as I said at the beginning of this article, …. a successful bike has a blueprint, a blueprint which is the basis of many custom and modified Triumph Twin. Its blueprint we can all work from and make our own. ‘The Climber’ may well be a diversion away Macco Motors usual and well established style, but they have taken a Scrambler and produced a bike every bit as special a their previous work.