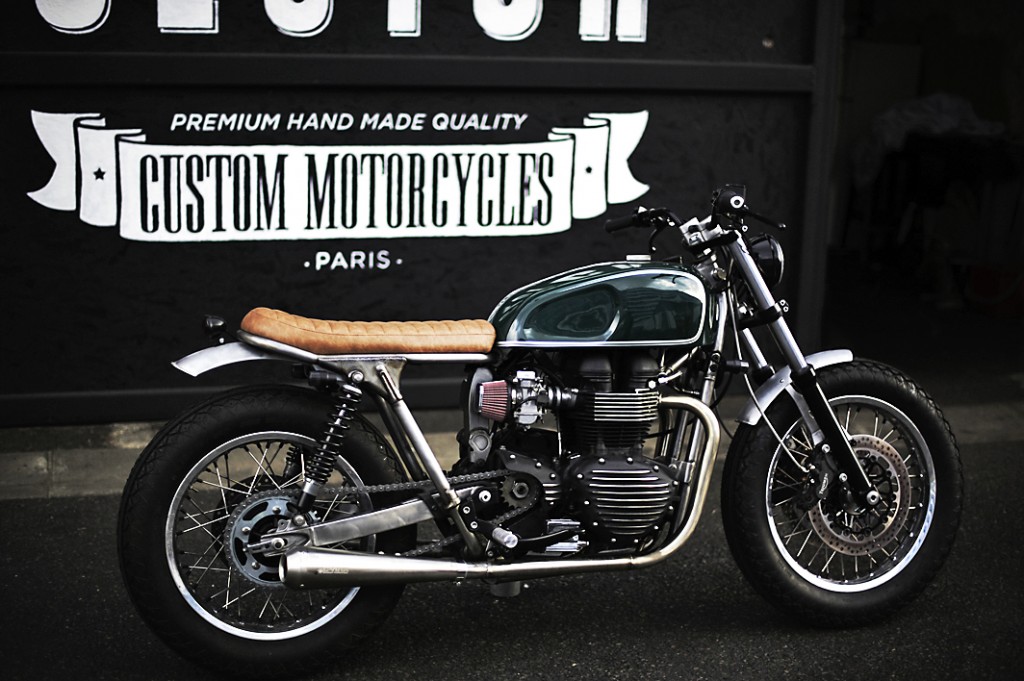 Clutch Custom Motorcycles, are an ‘independen’t motorcycle atelier in Paris France. CCM was was founded by Willie Know, a former fashion photographer. When Willie wasn’t working in the hectic world of fashion photography, he relaxed by building and customising motorcycles, but in 2010, Willie made the decision to wind down the photography side of his life, and focus on his other passion, and Clutch Custom Motorcycles was born.

Willie, and Clutch Custom Motorcycles pride themselves on doing as much in-house as possible, which gives  them total control over the bikes they build, most of which are based on modern classics from the seventies, but now Clutch have turned their attention to the Modern Classic and the Triumph T100.

Typically, for a custom Triumph Twin, the T100’s frame has received plenty of attention, having been completely reworked by Clutch Custom. Un-typically, Willie has re-made the seat section to follow a straighter line, which flows from a beautiful custom one off petrol tank, painted in a bluer shade of racing green. A colour which Willie hopes keeps the bikes Englishness, back to the custom rear frame loop with its perky upturn.

Willie achieved these straighter lines by cutting off the entire back end, and fabricating a new rear section. This new rear section is 200 mm lower at the back and 405 mm at the front. If you look at a stock frame you will notice the frame dips considerablyt.

Other frame modifications include; dumping of the ugly oil cooler, which clutters up the front of the engine compartment, and converting both engine cradles into a more efficient in-frame oil cooler.  This is an increasingly popular upgrade, and something we have seen recently on the Auto Fabrica Type 5  build we featured in June.

The pillion peg mounts are gone, as well as any other unwanted bracketry. The now svelter looking frame was finished of clear ceramic coat. As you can imagine there is also a lot of work you can’t see on this build, including all brackets that hold and hide the electrics. Work which won’t often see the light of day.

At the front of the T100 are a set of Triumph Trophy fork with machined triple tree axel and re machined top trees. The rims are Excel, with the 19″ front being re- laced to a XS 650 hub, and then fitted with double custom discs, which are one of the few items not made in-house.

The rear wheel has been enlarged from 17″ to an 18″, and then be shod with a very nice set of Cocker diamond Tires ( 19/400 front and 18/450 rear) Keeping the dirt and grime at bay are a set of custom alloy mudguards, the rear sporting the LED Bates tail light which can be seen on many custom builds featured on Bonnefication.

All bikes need a bit of bling and this build is no exception, there is a sprinkle of Motogadget goodies including the m-Switch and Tiny Speedo, along with a custom machined gas cap to finish of the custom petrol tank, and custom machines pegs give the rider somewhere to rest their feet. To set-off the rebuilt Hinckley Twin engine are a set of K&N and a set Speed Merchant side covers.

Though the side cover are not made in-house, they have been tweaked by Clutch Custom Motorcycles to make them a little unique from stock. The soundtrack to the Clutch Custom T100 has been supplied by custom headers and Sparks cans.