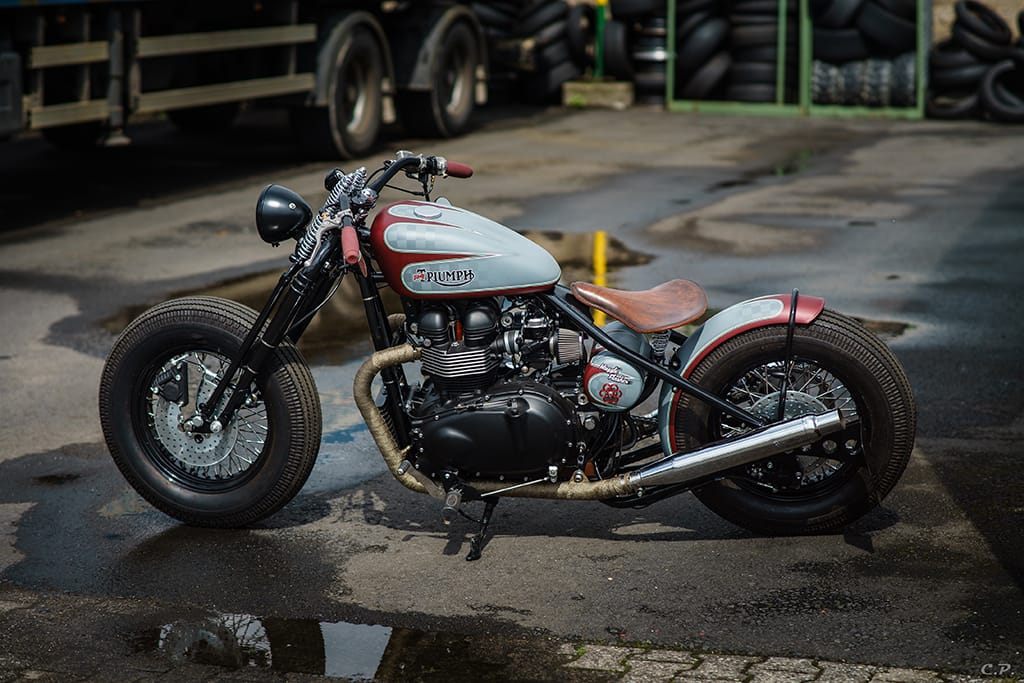 Before Christmas the motorcycle press was awash with reviews and rhetoric regarding Triumphs new Bonneville Bobber, a motorcycle we are told is receiving more pre release orders than the new Thruxton R did on it’s release. 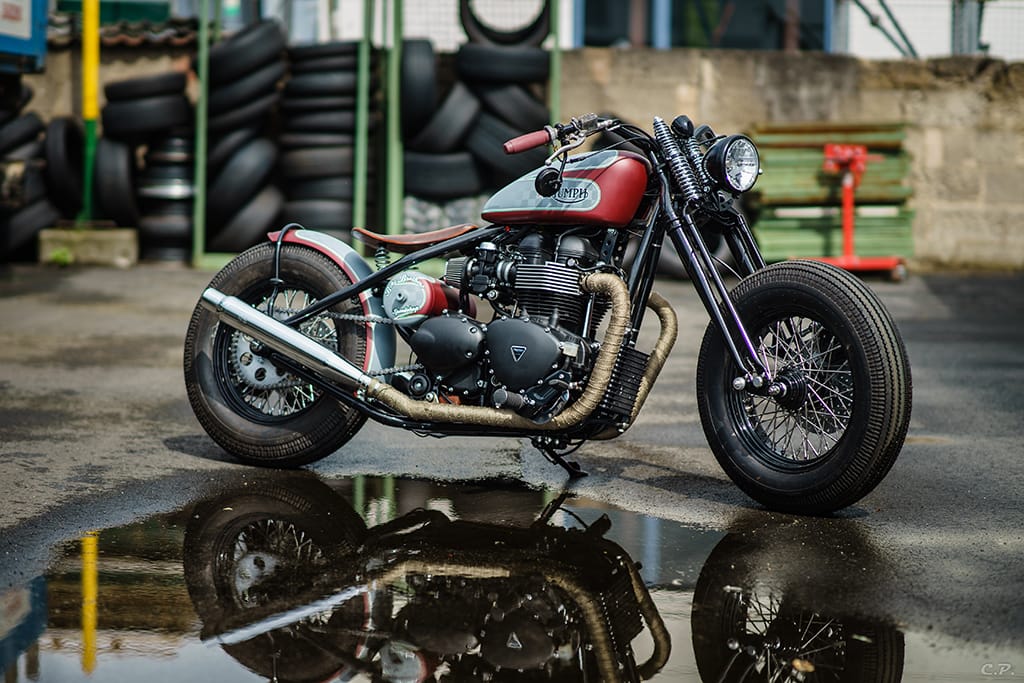 Though when spy shots of the Bobber were revealed last year, Triumphs new factory custom wasn’t received favourably by some enthusiasts of new wave motorcycles. This disdain continued on the day of the official reveal last October, with comments on Twitter suggesting anybody buying one should be dispatched violently! 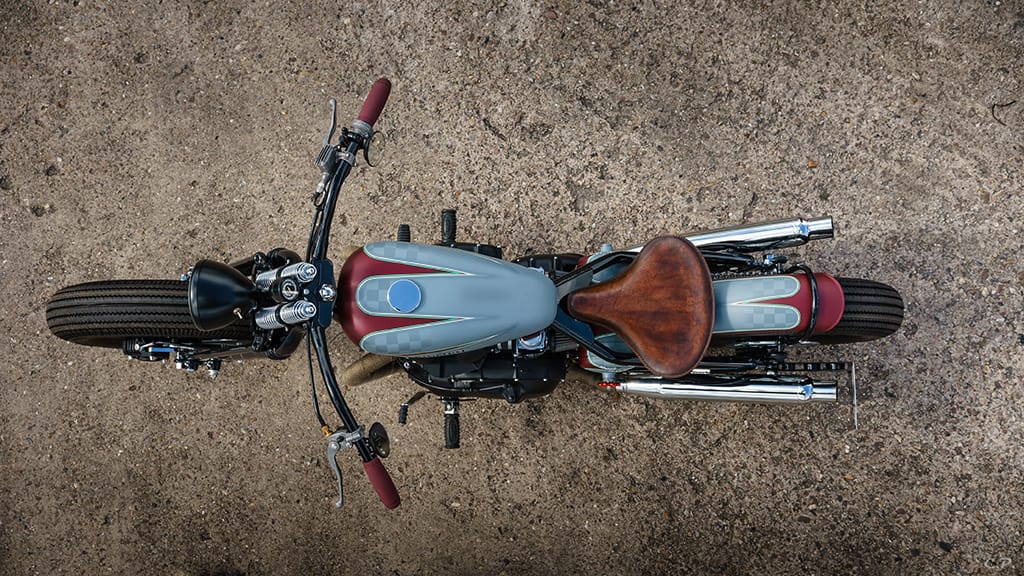 I doubt this minority group would actually turn to violence, at most their abuse will be limited to stern stares and more catty comments on social media. And Im sure in the coming twelve months these negative opinions will be silenced when popular new wave motorcycle blogs begin to feature truly customised Bobbers. 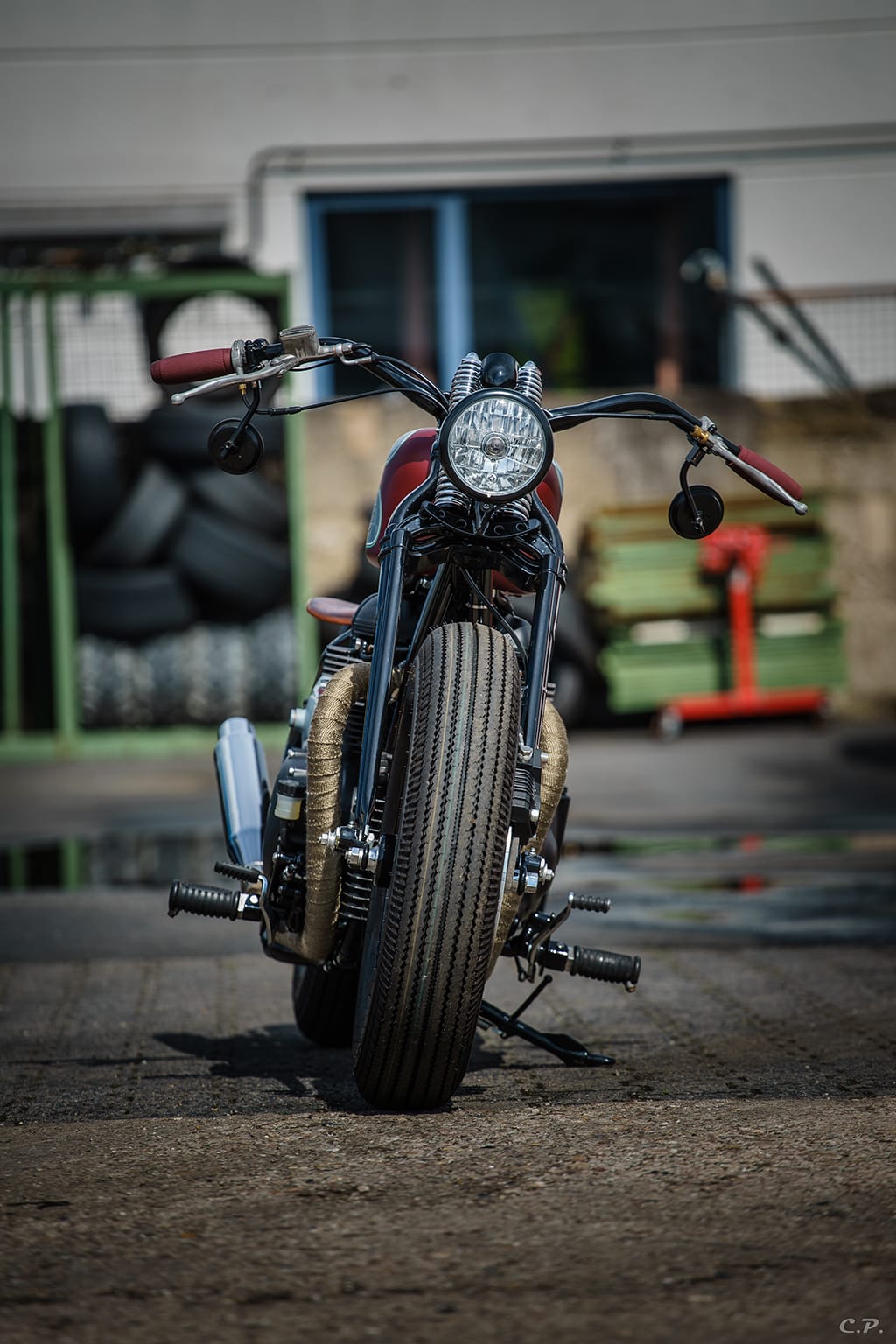 But you don’t need to buy one of these new factory customs to get a modern reliable Hinckley Triumph Bobber, something which brothers Daniel and Markus Laufka of Bikebrothers Speedshop demonstrate with their latest build the Muzzleflasher, based on a 2015 EFI Bonneville.

The EFI model, 865cc air-cooled Hinckley Triumph power plant aside, the core of this build is the 40º rake, 3” stretch bobber frame crafted by Gietl Bikes from seamlessly drawn thick-walled 1¼ pipe, with an upper 1½ ” frame tube. 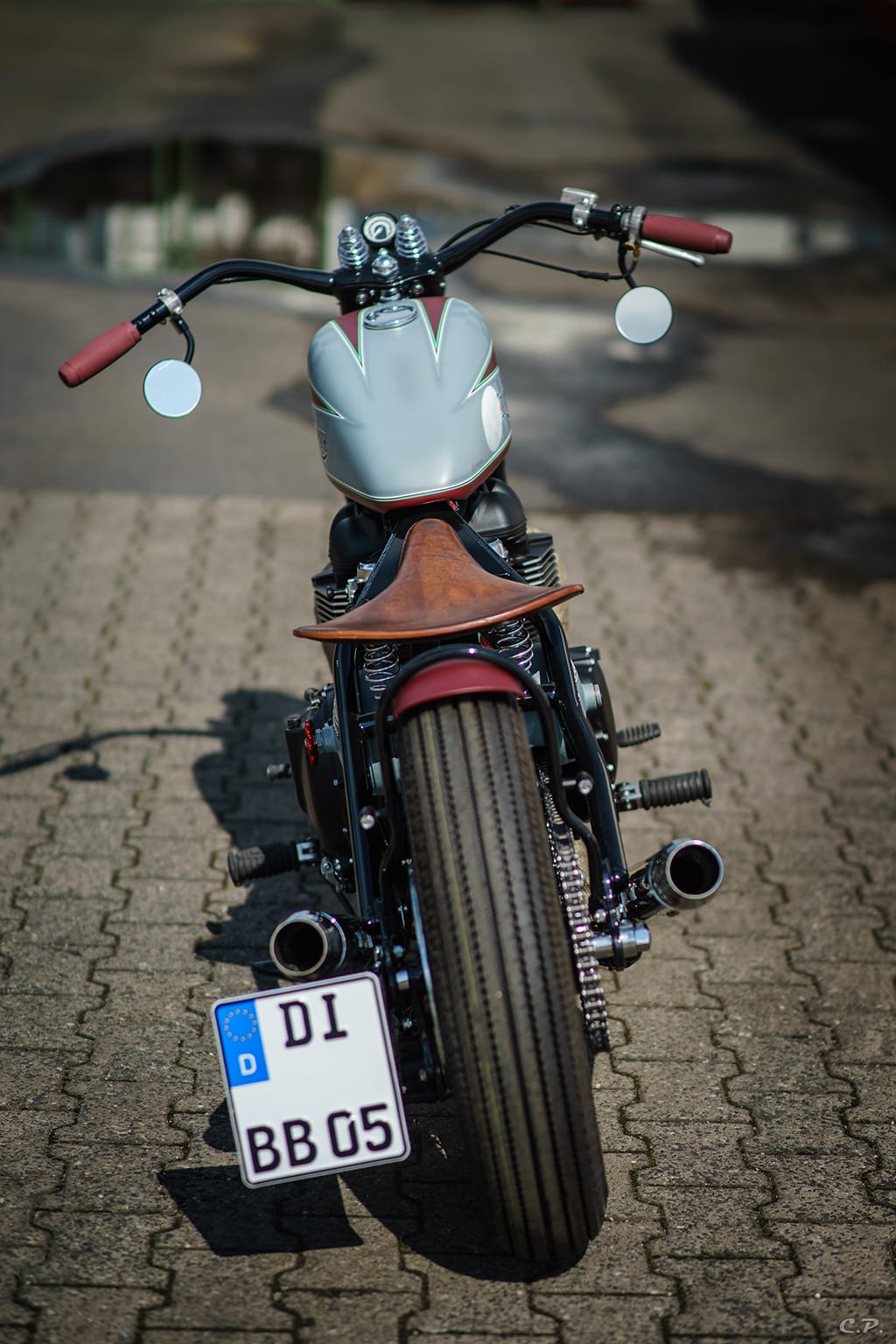 Rather than fitting the Bonneville forks to the new Bobber frame the brothers opted to fit a set springers from Dutch company Zodiac International, who’s extensive catalogue of parts is aimed at those customising Harley Davidson’s. These forks were lated fitted with a 7“ bottom mounted headlight. 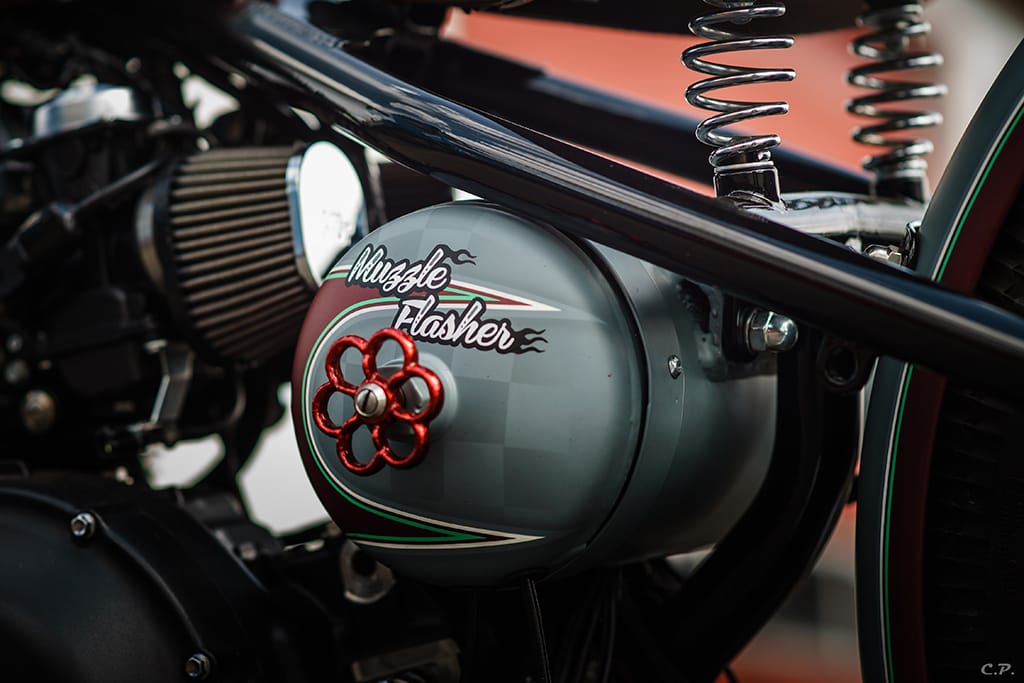 At this stage the Muzzleflasher build begins to get a little more complicated, with Daniel and Markus opting to fit a Harley Sportster Peanut tank – which wasn’t designed to contain an EFI pump and pressure regulator, or even to fit the custom Bobber frame. 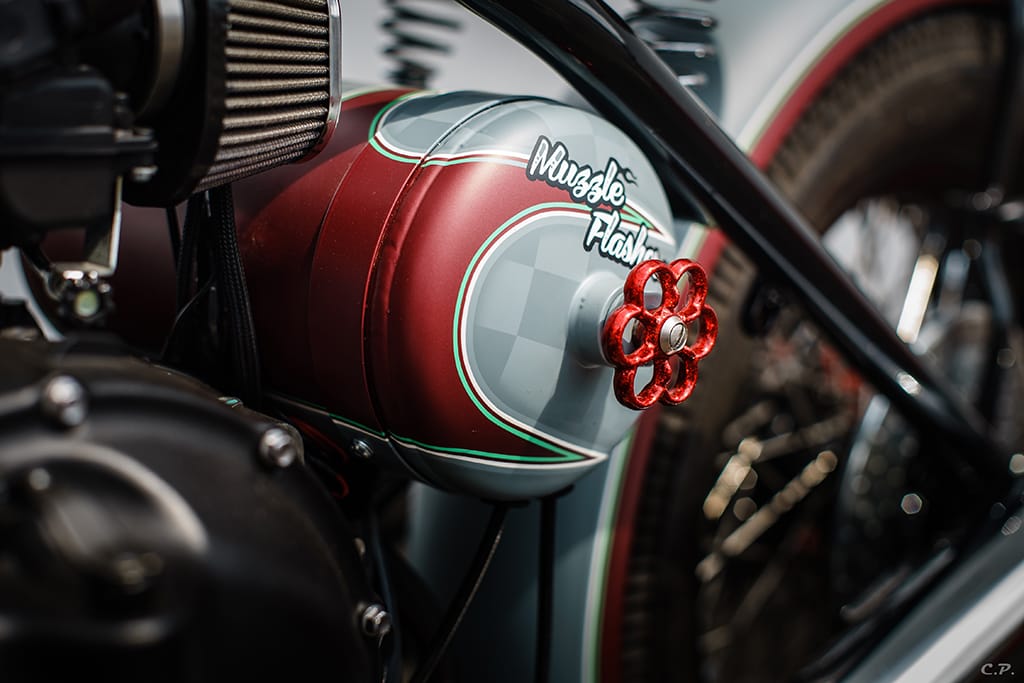 We have featured several builds that have overcome this issue by relocating the pump to behind the side covers once the stock air/battery box has been removed. This wasn’t possible on this build, as the bobber was to be fitted with a custom made oil tank containing the bikes electrics and a Motogadget m-unit, with the battery and rectifier being relocated to behind the engine. 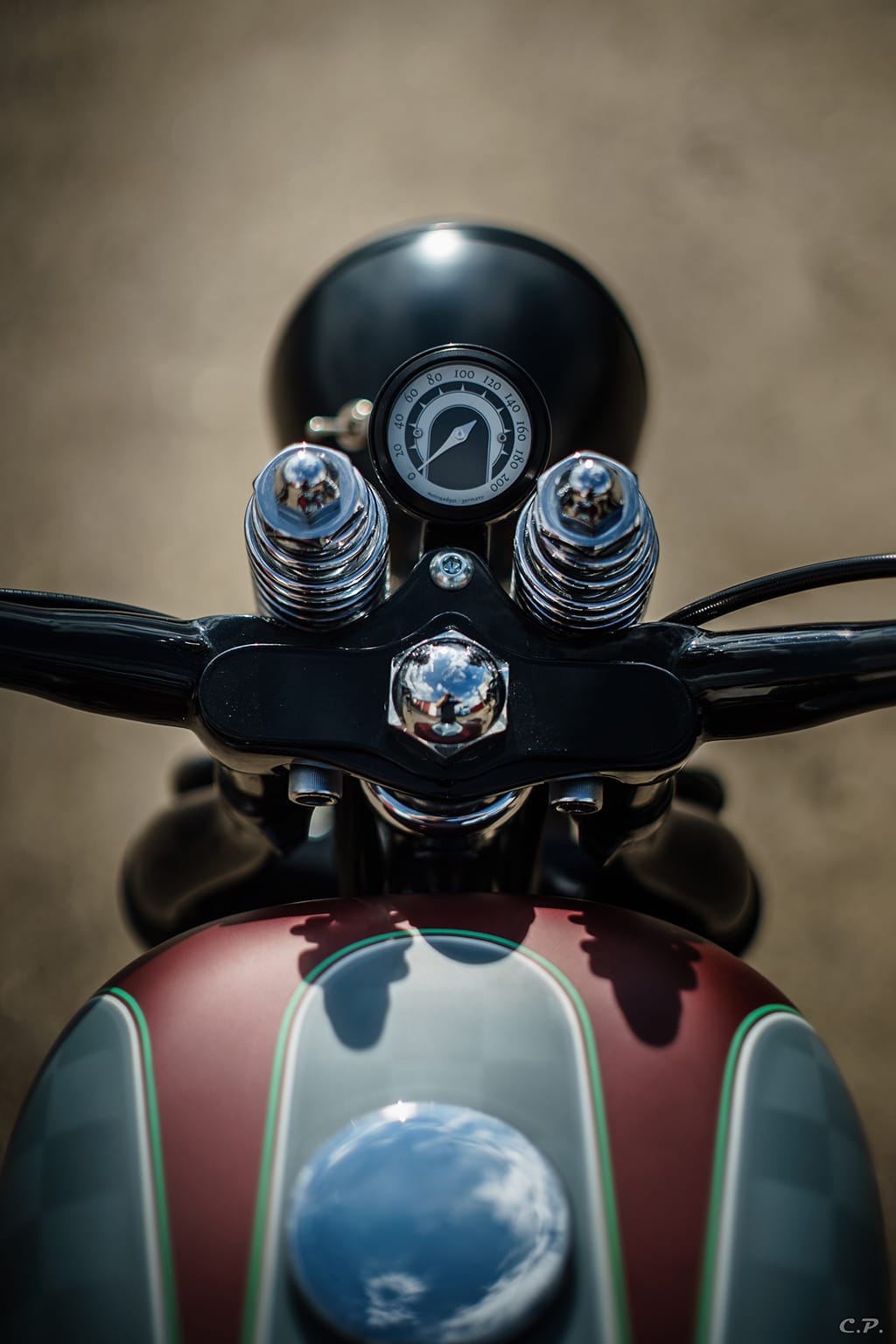 To overcome the pump issue, the mounting section from the Triumph tank was cut out and grafted into the Harley tank, allowing the pump to be fitted in exactly the same way as stock. The finished tank was then modified to fit the bobber frame, with extra attention being given to keeping any unsightly brackets from view.

The bobbers custom tinware was then taken to Michael Schönen of Lackmuss Custom painting to be finished in Oxblood and grey matt with retro airbrushed detailing. 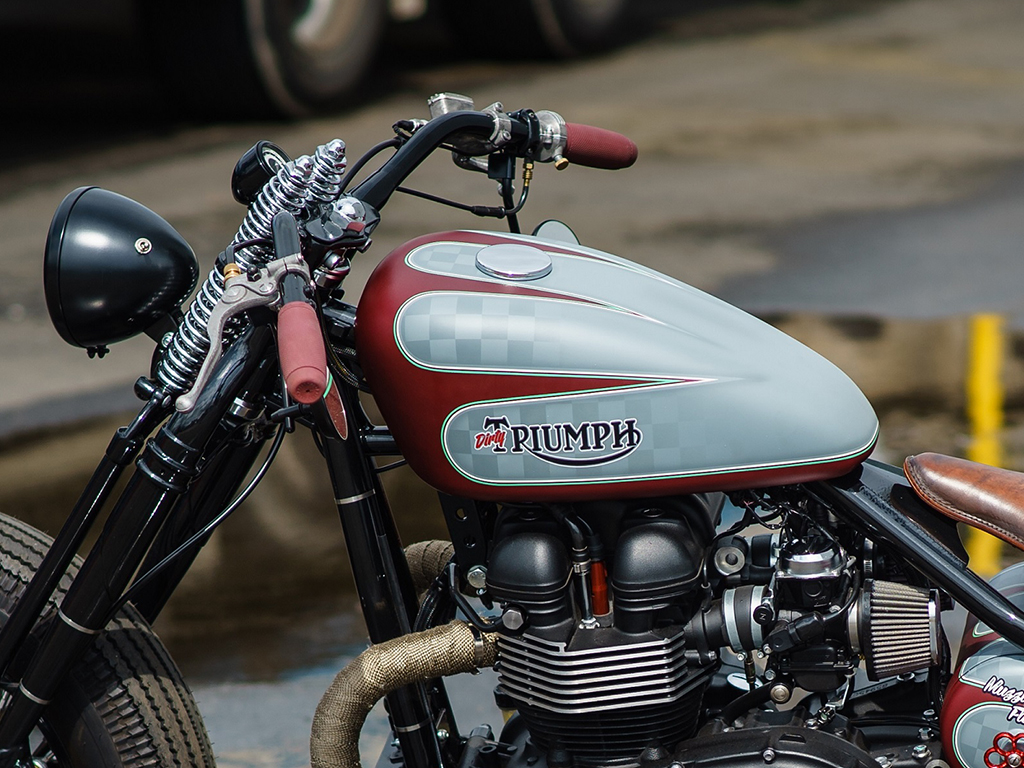 Unlike Triumphs new Bobber with its ‘swing cage’ hard tail, with hidden mono-shock suspension, the Muzzleflasher relies on a combination of the custom seats spring weight, fabricated in-house and covered in rich brown leather by Theobald Leathersworks – and the tire pressure of the Shinko E270 tires, wrapped to matching spoked 3.5×16“ wheels. 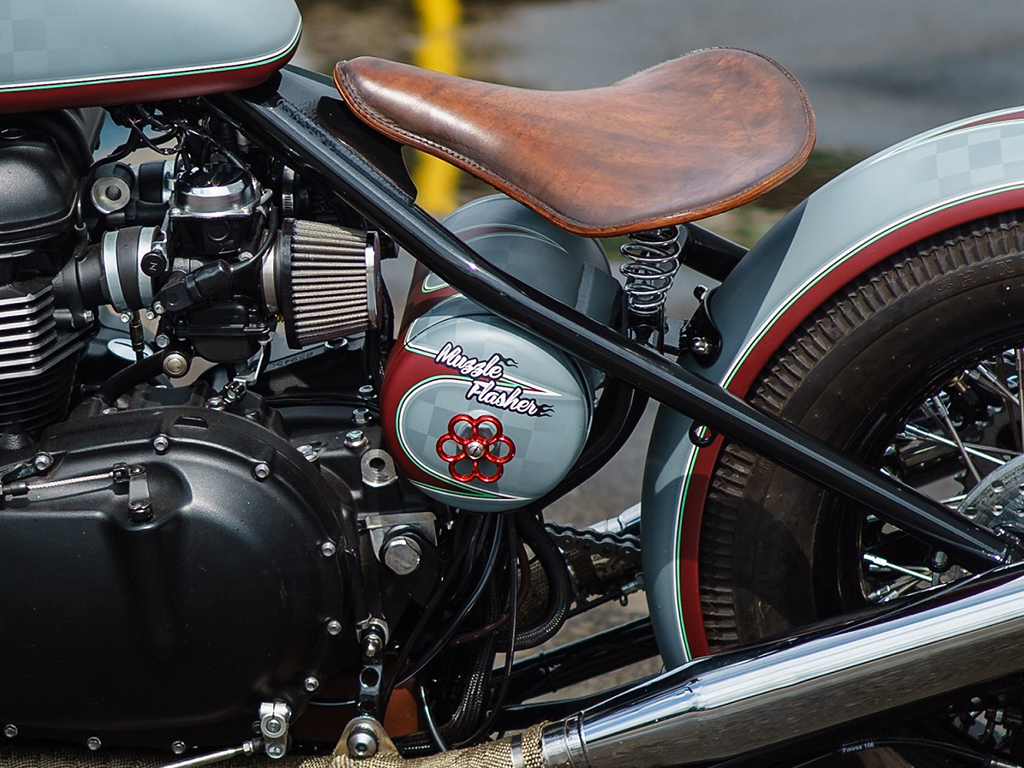 As you would expect the controls on this Bobber are not as complex as those on Triumph’s new factory custom – there is no adjustable speedo, riding modes or ride by wire, and the up front braking is supplied by a Brembo P08 caliber with no ABS. Instead the rider will look down custom made handlebars, Kustom-Tech levers, Biltwell grips and a Motogadget Tiny speedo, simplicity at its best. 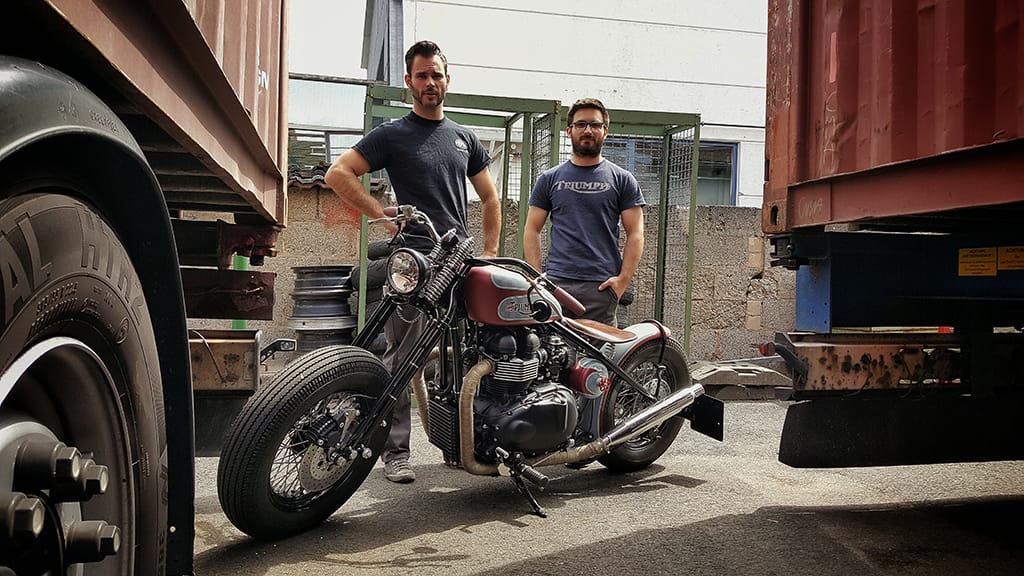 Personally I’m excited about the new factory Bobber, though I may wait for Triumph to reveal a Tracker before deciding what to buy. And when it comes to choosing between a custom or a factory built Triumph <insert cool hip name> the only person who needs to be convinced is  you.