We received from the lovely Britjet these pictures and included press release, regarding the latests collaboration between Triworx and Free Spirts and I for one love it . Many ponder the colour scheme of their bikes, but how many of us think to let our children not only come up with the design, but  also to let them do the painting. Something to consider in the future perhaps….

“A  brave but also unique project between TRIWORX and FREE SPIRITS will be presented in Verona. Marcello Fontana, a grumpy old man like he calls himself, is convinced to provide the young motorcycle-generation with a stage to unfold and develop their own creativity. That’s the only way for the old pros to get new impulses for their work.

Grumpy old man Marcello Fontana, head of FREE SPIRITS and Moritz Brée junior designer at TRIWORX and son of Tridays Mastermind Uli Brée, puzzled out a special undertaking. When Marcello met the young soon-to-be artist for the first time a few years ago, no one could imagine what big potential this connection was holding…

9-year old Moritz is – despite his young age – no unknown in the motorcycle scene. A little, blonde, cool guy, who rides his own miniature Café Racer on events like the Triumph Tridays and Glemseck101 and who’s melting the hearts of a dozen women. Since his early childhood he’s sketching Triumph motorcycles with great passion and real talent and crafts 1:18 motorcycle models.

After presenting the T12 built by Free Spirits on Tridays 2012, Moritz crafts a 1:18 diorama including the T12 as a present for his big friend Marcello. Grumpy old man was so overwhelmed by the talent of this young man, that he was obsessed by the idea of giving Moritz the chance to design a real motorcycle.

Marcello gave Moritz a free hand in designing a Triumph Scrambler, while he, himself looked only at the technical details of the bike. Out of this cooperation they developed a technical masterpiece and a imaginative piece of art. A motorcycle which not only moves your body, but also your heart. 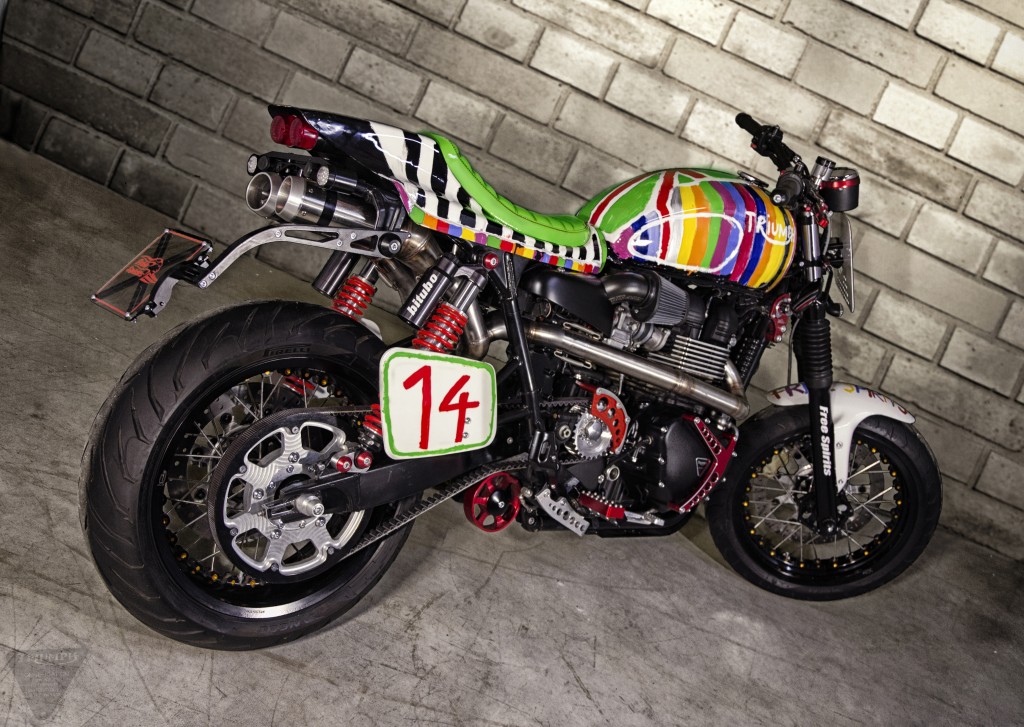 The young master of design followed consequently his vision for the Triumph Scrambler and didn’t let him be confused by the objection of the grand one’s. Moritz designed parts like the tank, mudguard, lamp mask and seat all by himself, while the seat cover was customised under the guidance of the young designer by “Sattlerei SAM”.

At this point a BIG THANKS to the company “Auto Brückl” as well as the “Sattlerei SAM” (Munich), who supported the young talent. The result is definitely worth a look. It combines young talent with old knowledge. The bike will be presented during the MOTOR BIKE EXPO in Verona from Jan, 24-26, 2014.”