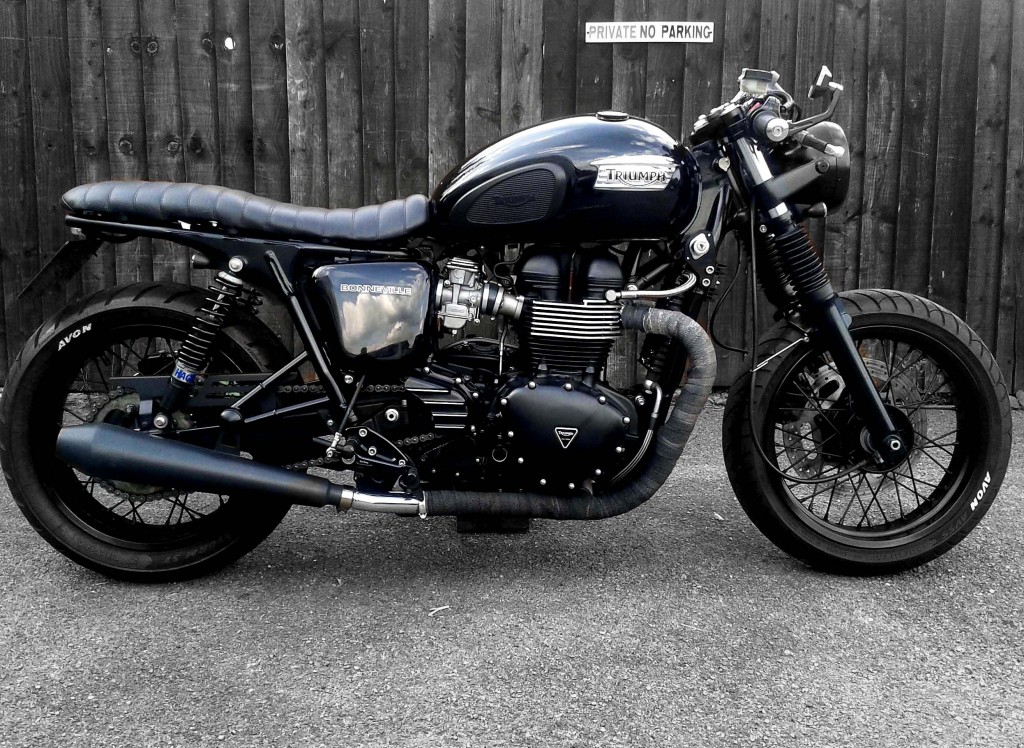 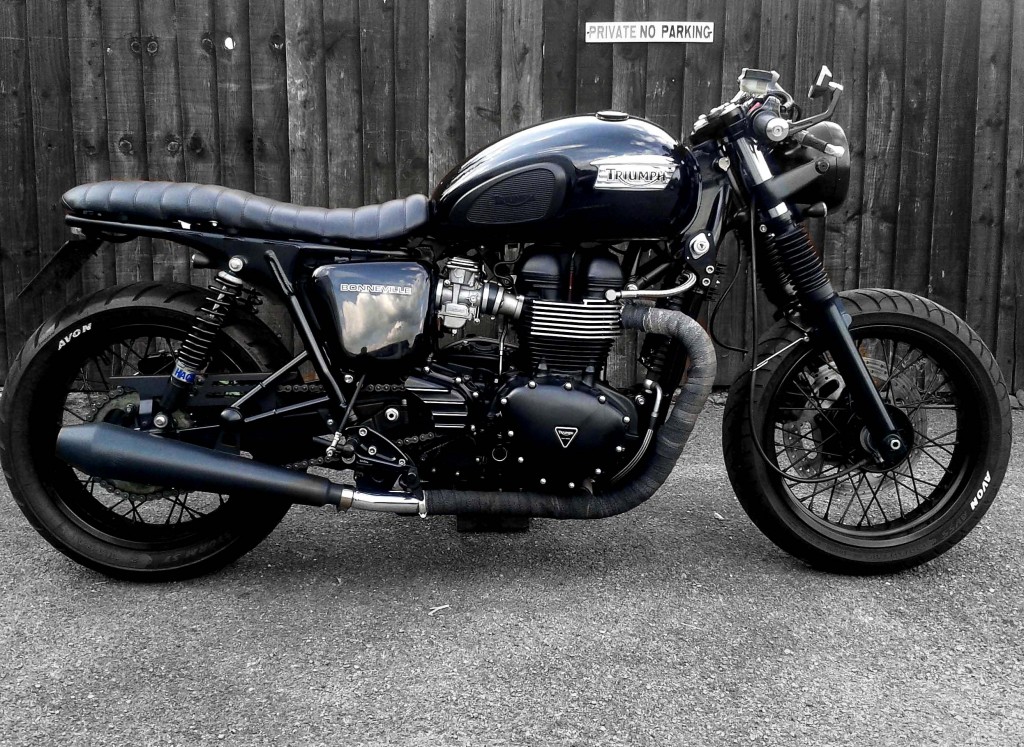 Bonnefication has aways had Custom Shed-Builds at it’s heart. The probuilds from the many excellent customs shops around the world, inspire us to develop the ‘look’ the ‘design’ the ‘concepet’. Where the home-builds inspire other would-be tinkerers to get the tools from wherever they are hiding, dust them off and to ‘build’ These pro and home builds often amaze us, surprise us or even disappoint us, but at least they help us know what we like, or dislike.
We can then mix these ideas, adding and taking away as we go, coming up with something of our own. This is why I created the candy-store of custom Triumph Twins called Bonnefication. Here we can bring you all those modified and custom Triumph’s, stick them in nice jars, place them on a shelf for you to Pick & Mix what you like. But remember, keep it simple, less really is more. And to much candy can be bad for you.

One such shed builder is Ian Barnish, from Newmarket here in the UK, 2010 Triumph Bonneville Black. Which sounds like its previous owner was shopping in an altogether different candy store, Ian continues … 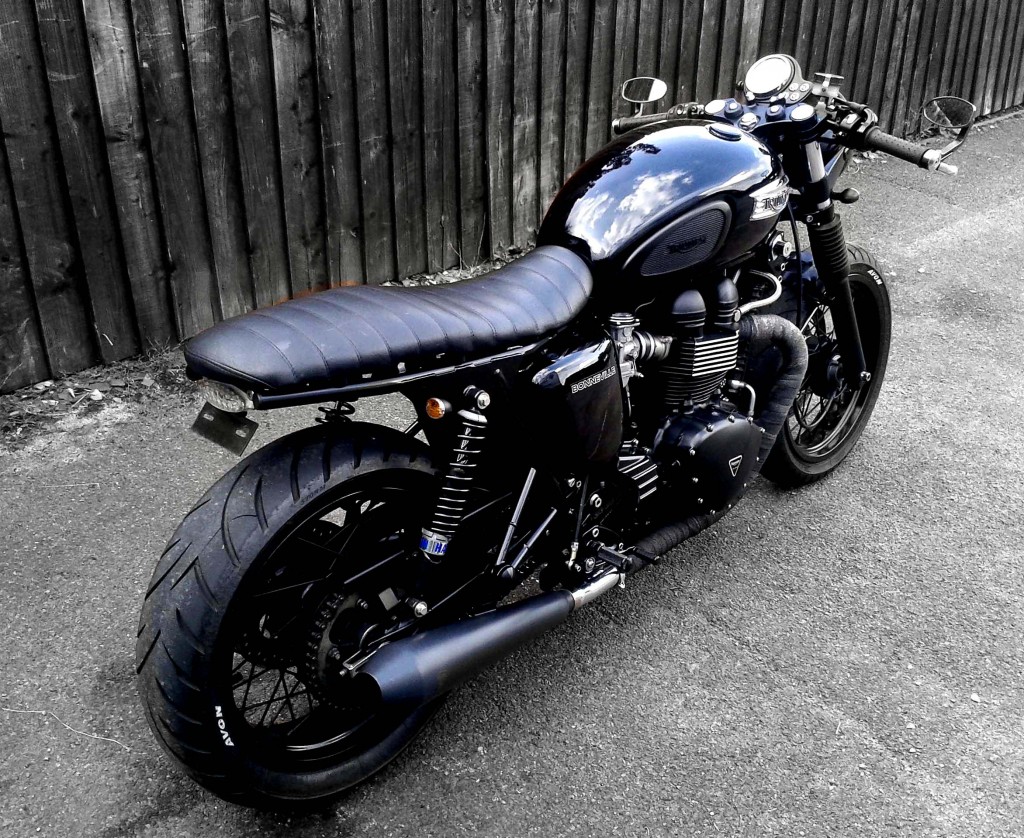 Within hours of getting it into the shed I had stripped off the masses of grab rails, sissy bars, center stand, engine bars, fancy fuel cap, rev counter, bash plate etc and started listing on good ol’ Ebay. The selling of the OEM accessories gave me a starting budget and with that off came the wheels, stock pipes, air injection, handlebars, mudguards, indicators, headlight brackets, headlight and seat. Most went back on Ebay except for the stock seat which I cut up, reshaped and recovered for a more slimmed down ‘bratsyle’ look.

The Devon Wheel company used to build the new set of wheels- I wanted wire wheels, 17″ rims, 1/2 ” wider at the rear and 1/4″ wider at the front and tubeless. A set of headlight brackets we’re picked up and powdercoated black. also lowering the smaller, ‘blacker’ LSL clubman headlight. I made some spacers and mounted the speedo beneath the top yoke for a flatter less obtrusive look. Fork gaiters were fitted and the handle bar riser spacers were painted satin black to block the holes after a set of LSL tour match clip ons were fitted.

A flush fit gas cap and ignition relocation finished off the front end of the bike.Back to the rear- with the bratsyle seat a fender eliminator and mini indicators were fitted to complete a minimalist look, Hagon shocks (black of course) and a Free Spirits caliper relocation bracket were then added (the bike is my only transport so it gets ridden in all weathers- the caliper relocation just seemed to make far more sense)  Sato racing rearsets were fitted to complete the riding position.

Now onto the sound- originally I picked up some Norman Hyde Togas but although they were nice they seemed too shiny for ol’ blackie and   too long. They were swapped with British Custom Predators and the downpipes wrapped. The final cosmetic change was with a LSL chainguard and my wifes Bonneville America ‘George Foreman Grill’ Sprocket cover. I cut off 90% of the sprocket cover, reshaped it, powder coated it black and then exposed the fins. With the looks taken care of, I removed the air injection, air box baffle, 02 sensors, added a K&N  air filter and remapped the ecu to suit.

So for now it’s where I want it, with a heavily chopped Triumph America sitting in the shed awaiting a hardtail conversion she may just stay in her current guise for a little while…..but when those spanners start calling……. (Bonnefication Likes project!!)   Why not submit you modified Triumph to Bonnefication